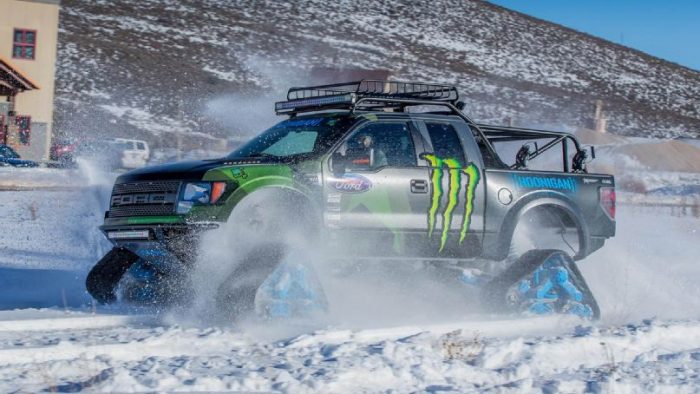 A new Ford F-150 Raptor has officially arrived on the scene. It’s tough, it’s rough, and it’s more impressive than ever before. It is so impressive that Ford had to stick a 10 speed shifter in it, despite getting rid of two cylinders after installing the very good but questionably robust V6 EcoBoost. However, the 2017 Ford F-150 Raptor is not the only Raptor you’d like to have right now. Winter season is in full swing, which is where some engineering trickery has seriously come in handy.

The Ford F-150 RaptorTRAX, which is based on the old (but gold) Raptor, is a heavily-modified variant courtesy of The Hoonigans. Yes, the same Hoonigans that built the mighty Hoonicorn Mustang for Ken Block in which he killed every tire ever found in LA drifting over everything he could on the road. 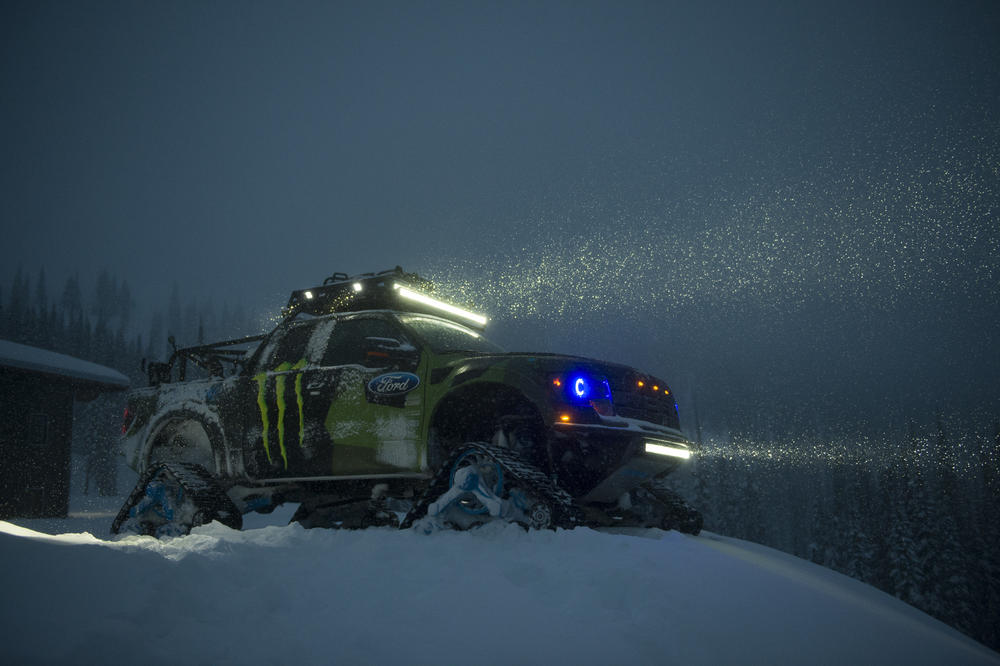 Little is known, but he is apparently an avid fan of snowboarding. Of course, he likes everything that is extreme, and snowboarding from the tips of the mountains is, well, extreme enough. The problem emerges, however, when it’s time for him to get to the top of that mountain. Two possibilities exist – a helicopter (which is insanely expensive) and a powered snow sledge (which is not that practical). Of course, he could just ride the lifts like everyone else, but if you really want to shred fresh powder on some untamed slopes, another solution needs to be engineered.

Luckily, Ford came to the rescue and sent him a Ford F-150 Raptor and told him and his crew to make it a formidable off-road snow machine. In order to show you what they’ve  built, Ken Block made this video in which he depicts the insane effort of the Hoonigan team which turned the Raptor into the RaptorTRAX.

The amount of work involved here is nothing short of over-the-top. First, the wheels and suspension have been removed in order to install these new large tracks which weigh 350 lbs each. The added weight compromised the suspension, so the Hoonigank toot the best from the market and integrated kingpins, new shocks and new absorbers with longer travel that make the things a bit more bearable (read: functional). 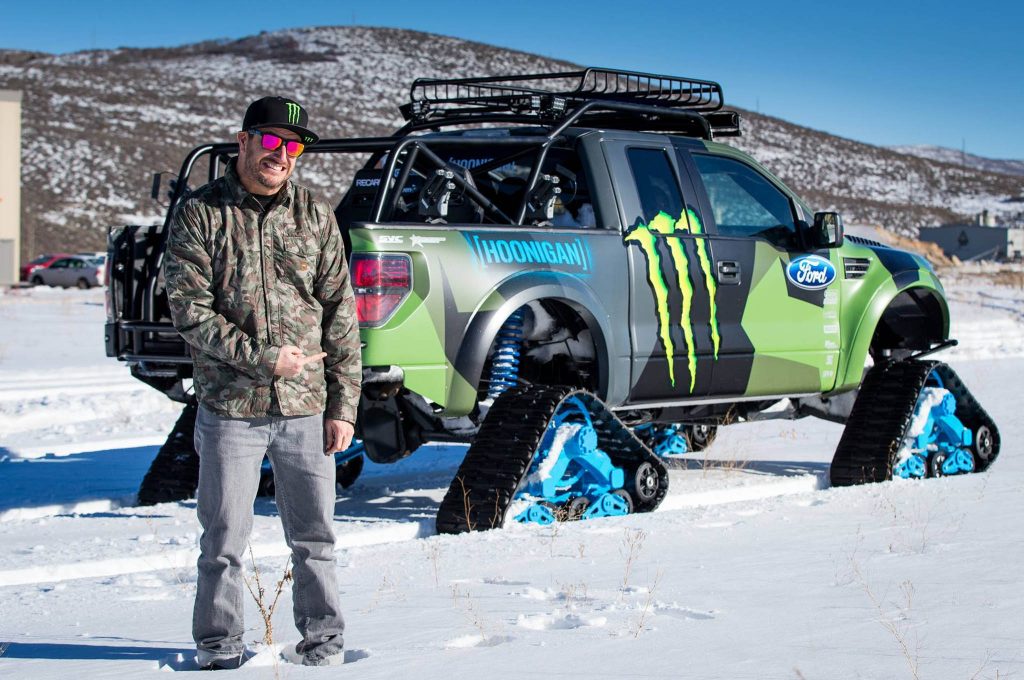 After that, they felt a shortage of power thanks to the added weight. Well, the 6.2L V8 from that Raptor churns out 411 HP, but the Hoonigans demanded more. With the installation of a Whipple supercharger and some additional tweaks to the engine, the maximum power surged to over 650 HP. Is that enough? Ooouuuu, it is. This is maybe the only Raptor F-150 that is able to conquer any terrain it sets its tracks on.

Yes, this is a vehicle that your son will want as his smartphone wallpaper and it is the type of vehicle that can truly put on an incredible show. As it turns out, this Ford F-150 RaptorTRAX is fully equipped to sustain a small snowboarding team over the course of a day. It has an exterior audio system, Recaro seats inside and at the back and a tough rollbar that protects everything. Just in case, the Hoonigans installed a winch at the back and, for another case, this RaptorTRAX has a barbeque which can be fixed at the rear end of the truck. 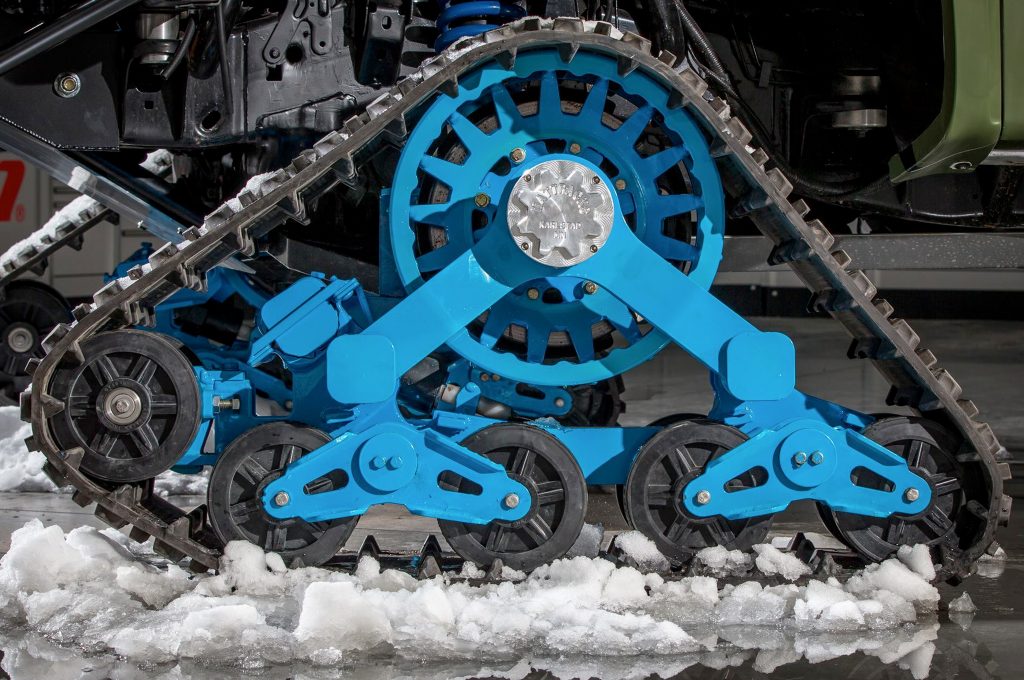 It is clear that this is just a big toy for showing off but admit it, you’d probably love to have it all to yourself to see just what it can do. Although these tracks enable it to go over any imaginable terrain, the best terrain for this monstrous vehicle are the snow-covered slopes. Those 650 horses have to stretch their legs somewhere and, let’s be honest, every single one is getting put to work on the slopes. 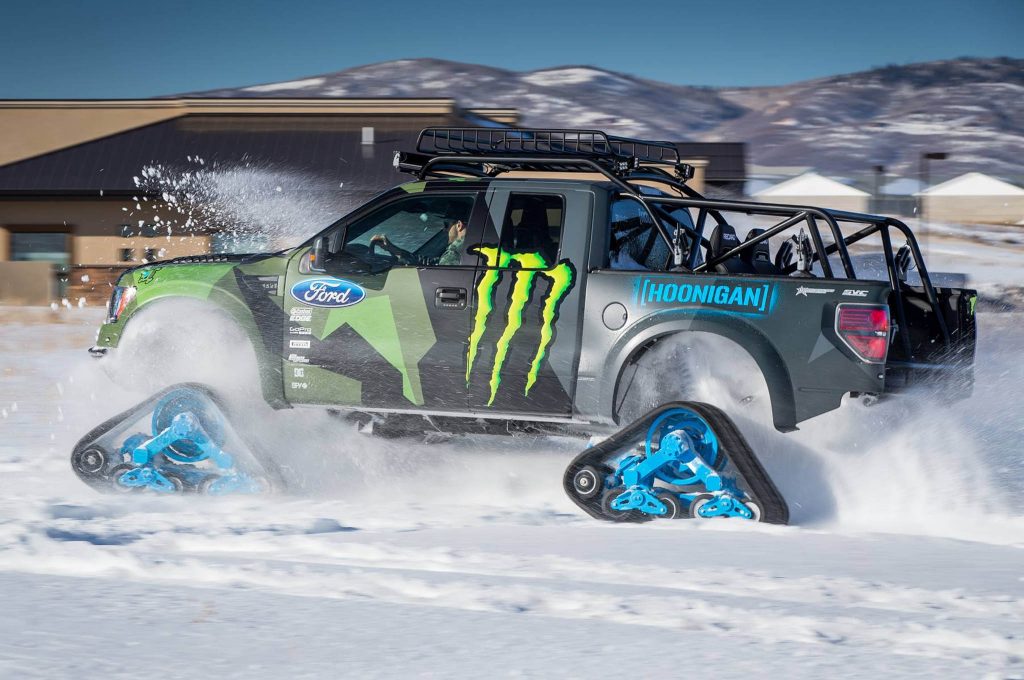 Unfortunately, this vehicle will not be available for purchase, but if you really have a lot of money, try to contact Hoonigans and persuade them to make you your own RaptorTRAX. How expensive can it really be!? 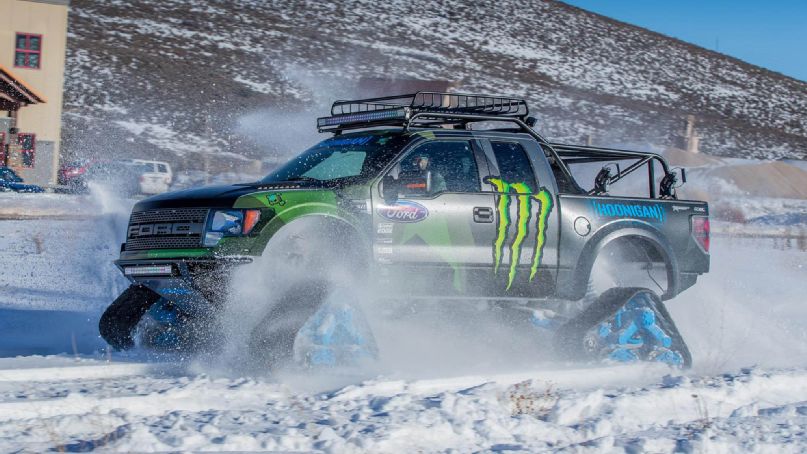