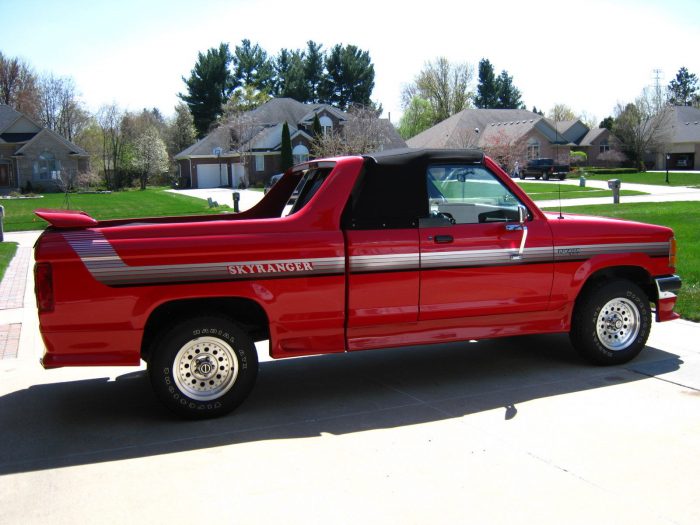 Pressured by competitors which by ’66 were already deep in muscle car game, Ford finally pulled their ace and installed the 427ci 7.0L V8 engine into the Fairlane. 70 of these R-Code Fairlanes were meant to be built, but only 57 2-door hardtops ended up being produced. Things weren’t much better the following year when the 229 R and W-codes were made. Furthermore, Ford had plans to build the Fairlane GT with 427ci, but that project was scrapped. Although, there’s one Fairlane GT hardtop in Ford’s books. Only it hasn’t been accounted for. All this clearly states that Blue Oval had some troubles supplying the engine.

Nevertheless, the Ford Fairlane 500 R-Code was one hell of a car, officially generating 425 horsepower. It also had the 4-speed manual transmission and scooped fiberglass hood. As if 57 units didn’t make it rare enough already, most of the R-Code Fairlanes don’t have the original driveline that’s intact. That only makes them even more collectible. 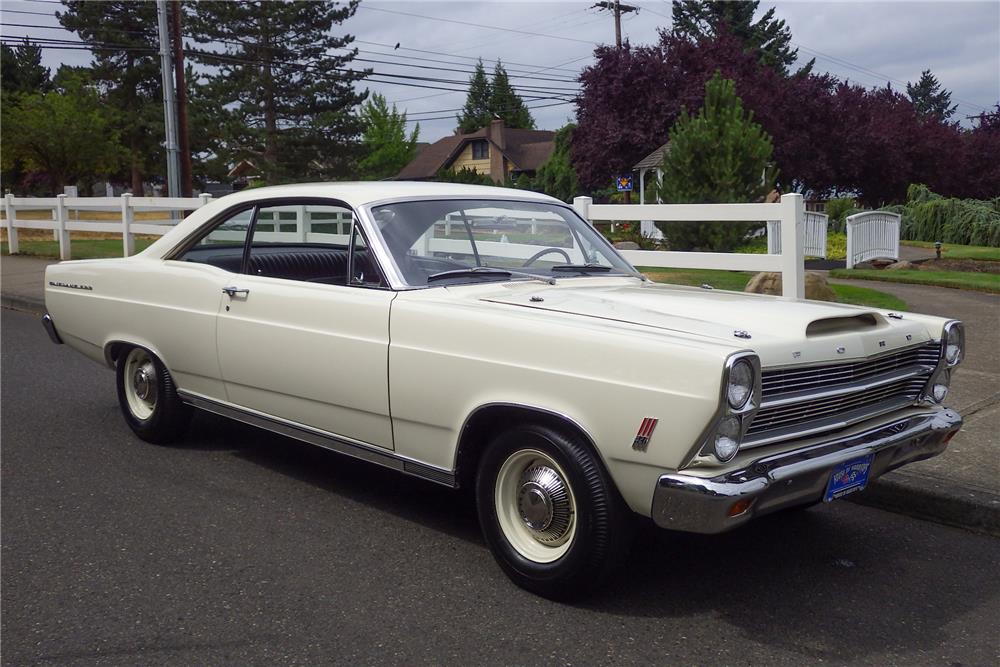 The Ford Skyranger was supposed to be built by a third party manufacturer – the American Sunroof Company. And it was, but not for long. Ford wasn’t that enthusiastic about the project and they scrapped it after ASC made less than 20 Skyrangers. Reports vary, but either 17 or 19 had been built. In any case, every single Skyranger features a stock 4.0L V6, all-wheel drive and extended cab. ASC only chopped off the roof and put the soft top instead. They also created one of the rarest pickup trucks ever, although somewhat unintentionally. 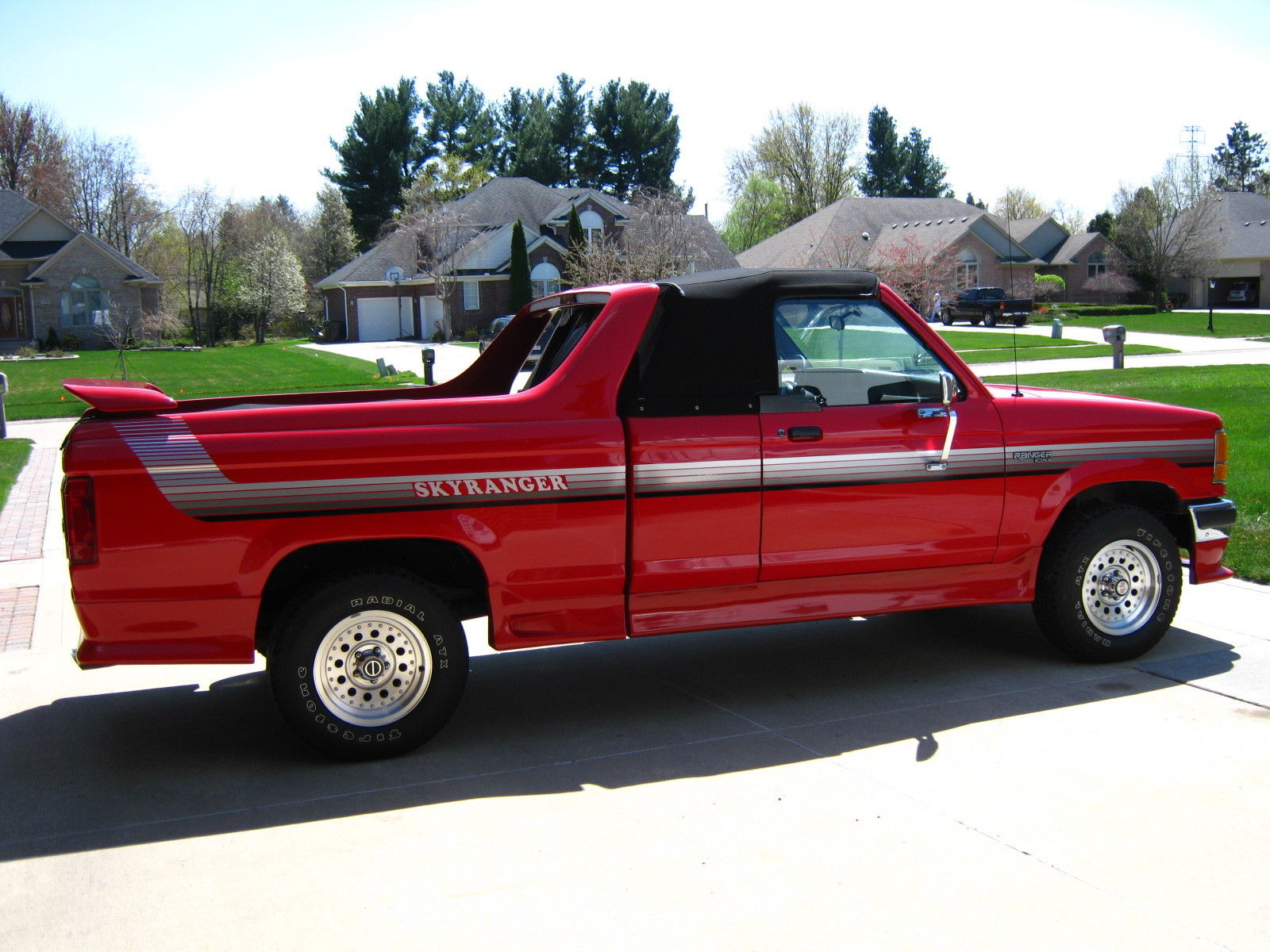 The Expedition Funkmaster Flex special edition was instigated by a certain hip hop DJ and producer – can you guess his name? – and the special edition only features cosmetic changes. It’s basically a stock Ford Expedition with 300-horsepower 5.4L V8 and a 6-speed automatic transmission. However, it rocks a black and red paint job, 20-inch chrome-clad aluminum wheels, and special badges on the outside, red stitching and trim on the inside. Only 650 of Funkmaster Flex Expeditions have been pushed, but that was to be the beginning only. Flex was supposed to flex out Mustangs too, but that plan hasn’t ever come into fruition. 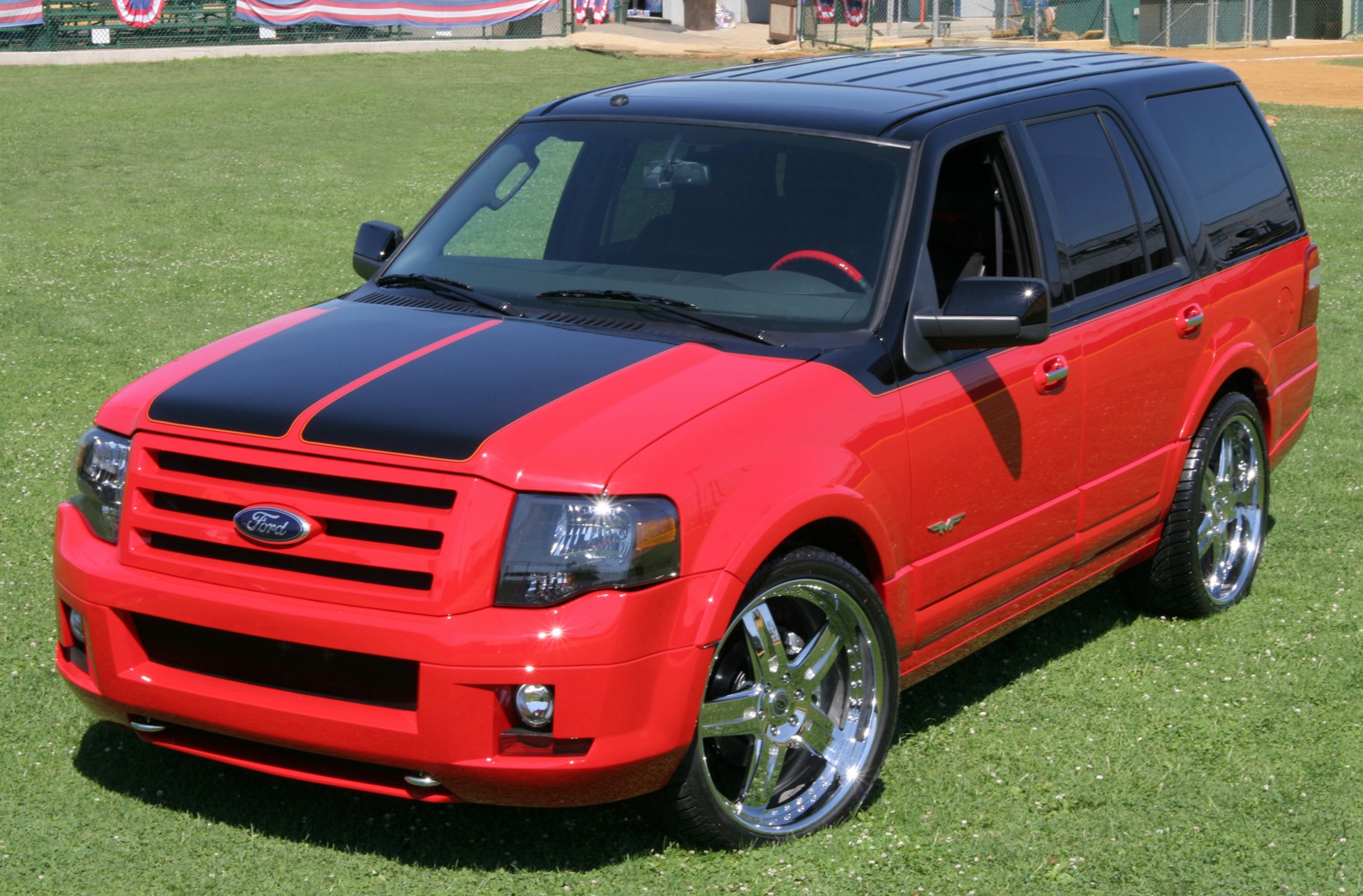 Pretty much every car, lawnmower and skateboard manufacturer back then jumped in on the America’s bicentennial special edition theme, and Ford was no different. Although, they were somewhat more reserved about it, offering the package only in their F-series trucks. Moreover, the package itself was rather conservative. It can be explained by Ford’s perception that other carmakers would wholeheartedly jump in on the bicentennial thing in order to make more money. They probably weren’t willing to be branded opportunists, so they kept a low profile.

Ford’s variation on the theme was based on either the Wimbledon White or Bahama Blue exterior color, and golden eagle crest and stripe over it. Only hint of a red came in thin border stripe on the side. Inside, blue vinyl seats were combined with a red, white and blue plaid cloth motif. There was also custom lettering and an eagle badge on the glove box, and that was pretty much it. It’s not known how many people decided to tick the Spirit of 76 box that spring, but very few such F-series (F-100 through F-350) survive to this day. 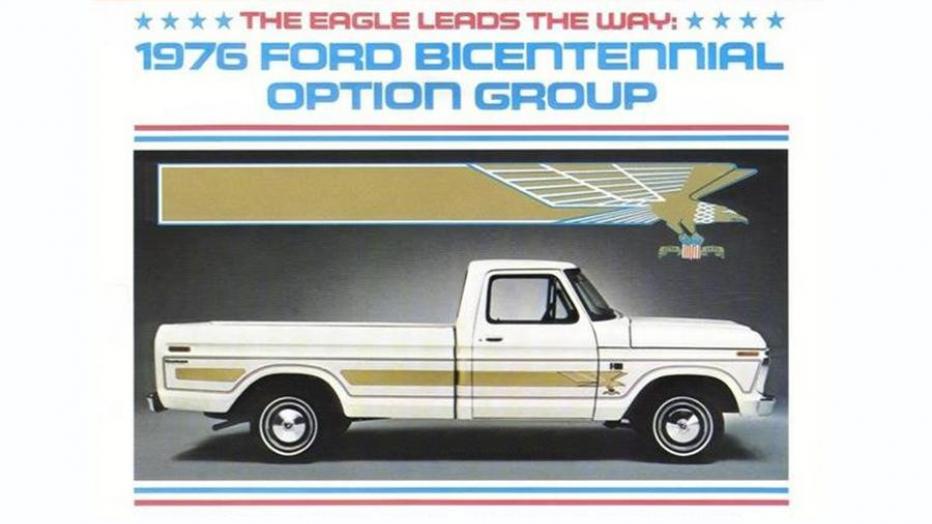 Bond cars have always had that special aura around them, and Ford was always around when it came to 007. After the not so great 2002 – Die Another Day came out, the Blue Oval decided to commemorate the occasion with the also not so great revived retro Thunderbird. Since Bond drove an Aston Martin V12 Vanquish and Zao drove a Jaguar XKR, Ford’s choices were limited. The next best thing (although I’d say it was the absolute best thing in the movie) was Halle Berry and her role of Giacinta Jinx Johnson.

The Bond girl’s Thunderbird was commissioned for only 700 units (694 sold and 6 used for recording) and all were colored Sunset Coral to match Jinx’s bathing suit from the movie. Unlike the movie, however, the real world special edition Thunderbird came with a white top. The interior was equipped with Performance White leather seats, a small badge on the instrument panel and a numbered, commemorative plaque on the glove box. All models were fitted with 3.9L V8’s, but they had new variable intake camshaft timing which raised the power output from 252 hp to 280 hp. So that’s something. 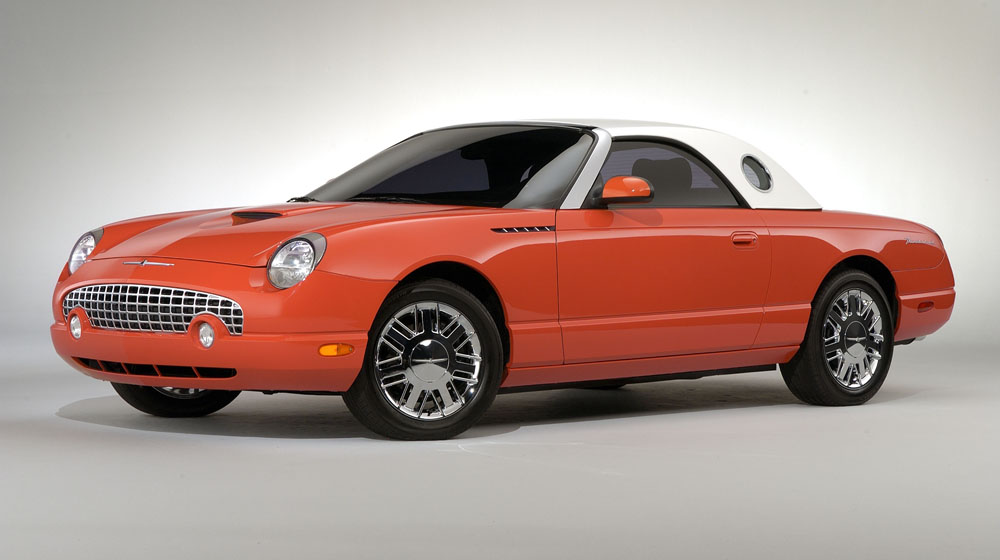 When Saleen ordered a batch of second generation Ford Explorers back in 1998, little did they know they’ll get a few “rotten eggs” in the package. Things weren’t exactly that bad, but instead of a V8-powered Explorer, a few of the XLTs were fitted with a V6. Instead of returning the “faulty” package back to Ford, Saleen proceeded in making the best out of the situation. Thus, the Saleen XP6 was born. The XP6 was a straight 4.0L V6-powered conversion Explorer and only 6 of them have been reported thus far. There couldn’t have been more than 10 of these.

The XP8, on the other hand, was exactly what Saleen had intended from the get-go. Between 125 and 265 of these were made and they were either available with straight 222-horsepower 5.0L V8 or Saleen’s supercharged version of the engine which developed 286 horsepower. Saleen’s Explorers were lowered by 2 inches which improved both the handling and the looks. Racecraft suspension components were installed and so were Saleen’s own 18-inch magnesium wheels. Either wood or carbon fiber treatment could have been chosen for the cabin, along with optional RECARO leather seats. 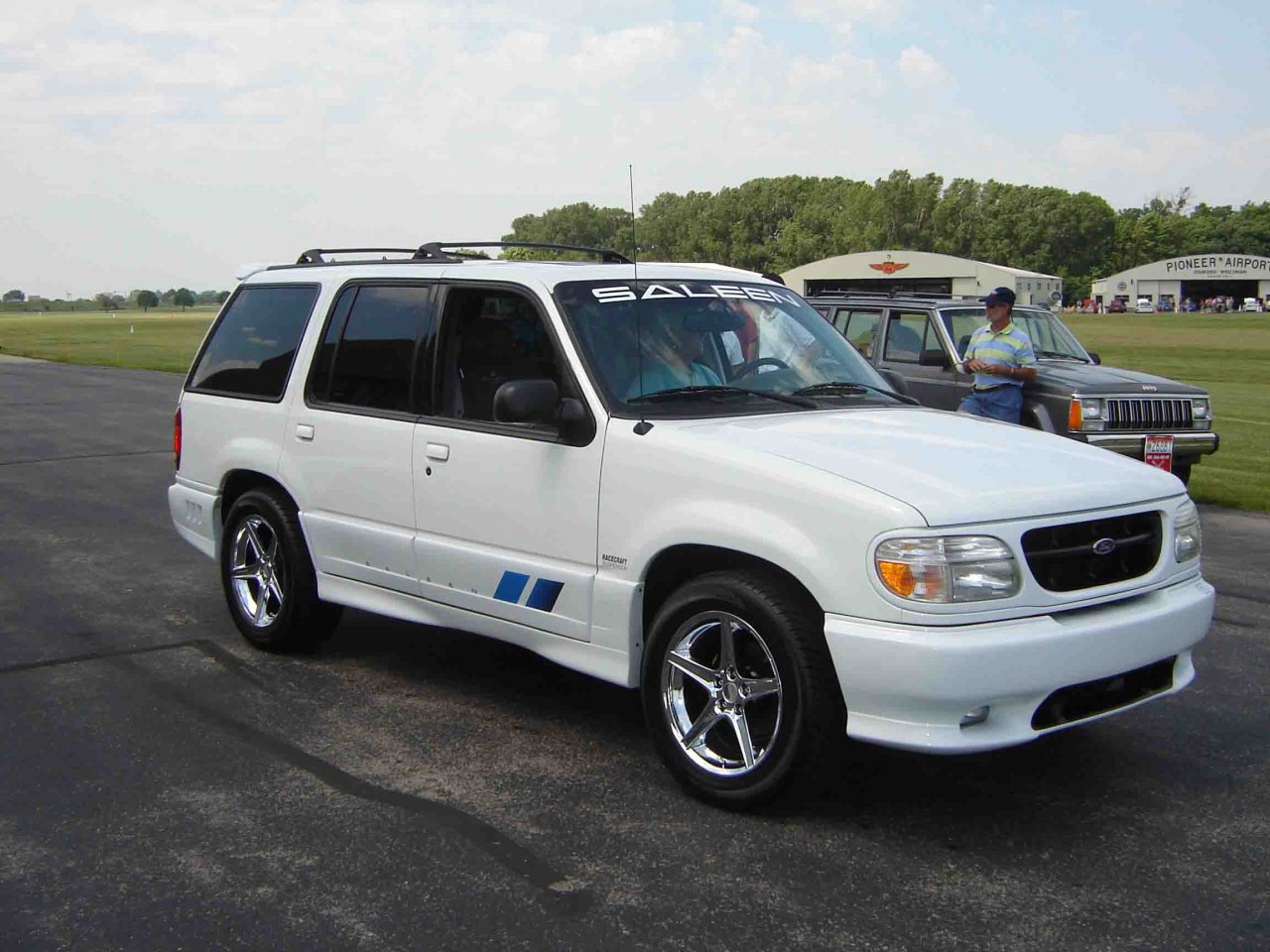 Incidentally, 1998 was both the anniversary year of NASCAR racing and F-Series trucks. At the same time, Ford was just beginning a 5-year sponsorship deal with NASCAR. So in order to commemorate the occasion, Ford naturally released the F-150 NASCAR Special Edition. The Spring Special was made in some 3,000 copies, all of which were black. Furthermore, all had the 220-horsepower 4.6L Triton V8 mill, 120-inch wheelbase, 16-inch black aluminum wheels, Roush dual stainless-steel exhaust tips and front air dam, and mandatory XL trim level. At least 5-speed manual or 4-speed automatic models were available to choose from.

Only 17 weeks were needed for the project to go from the concept to production . That might be one of the reasons the VIN plate doesn’t hold any information about them. The window sticker and “94N” order code are the only identifying features on the NASCAR F-150 – that, and the checkered flag stripe and NASCAR Official Truck emblem around the bed. 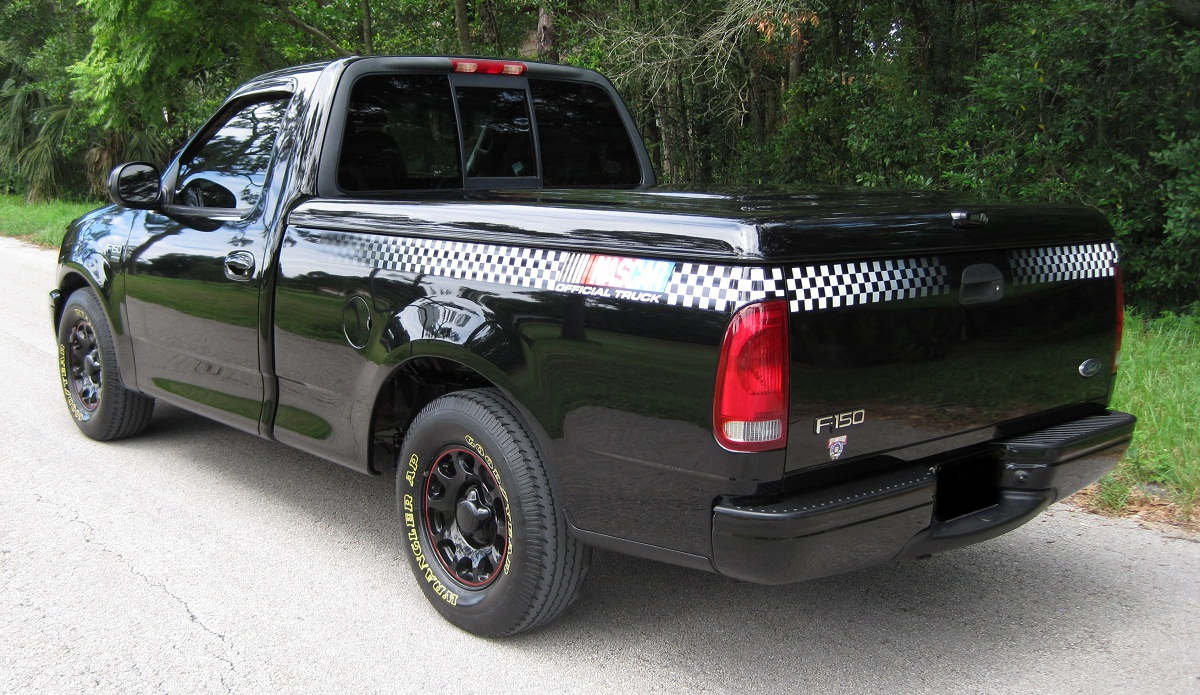 The early seventies were both exciting and thrill-killing for the muscle car scene. On the one hand, some of the best muscle cars were produced in ’70 and ’71. On the other, emissions regulations and soaring oil prices had practically killed the scene. This is where compact and economical imports, captives and domestic cars entered the fray.

Ford’s Maverick was one of these compact cars, but it wasn’t all that dull. At least not with the Stallion package offered during the  ’76. The Stallion was a Maverick with some extra kick as Ford described it. According to them, it was proof that the economy segment can still be fun and exciting. Inside, the Black Random Stripe cloth and vinyl upholstery were standard, while an all-vinyl bench seat or sporty bucket seats in black vinyl were optional. Outside, the Maverick Stallion featured a blacked-out trim and grille, special paint on hood, roof, decklid and lower body, and stallion graphic on front fenders. True to its nature, the Maverick Stallion could be ordered with a duo of potent engines mated to a 4-speed manual trans: either with the standard 250ci in-line six or the optional 302ci V8. Only 5,529 Maverick Stallions were produced, but the package itself was offered on the Pinto and Mustang II as well. 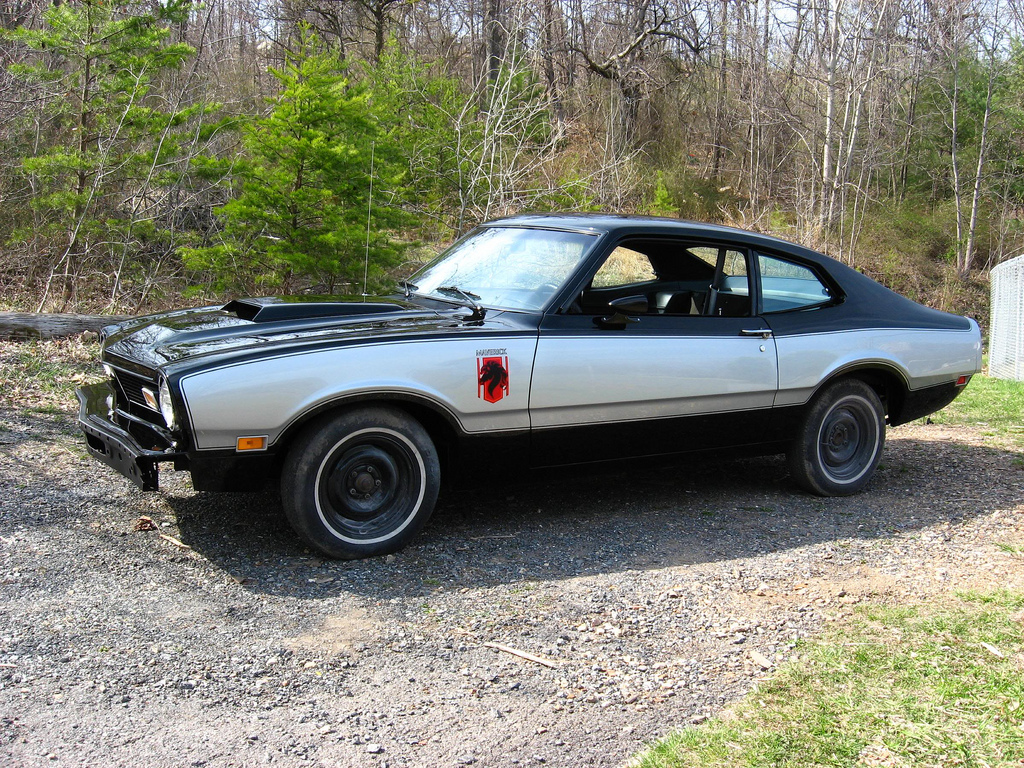 An entrant from Australia – the Falcon Cobra was a muscle car produced in 1978 that was limited to just 400-units. Ford Australia already had plans for the new XD Falcon which would be offered exclusively in 4-door variants, but they decided to do something special with the XC Falcon which was still a 2-door coupe affair among other things. Not that they wanted to, but there were 400 XC shells left unsold and they didn’t want to scrap them.

Their first idea was to convert them into black and gold Playboy-themed cars, complete with bunny decals. Sadly, they soon abandoned that idea, but at least they gave us the next best thing – the Ford Falcon Cobra. Bold Blue bow to stern stripes and with a Sno White background were chosen for colors, while bold cobra decals were fixed to the front fenders. 200 XC Falcon Cobras received the 351ci Cleveland V8 engine, while the remaining 200 got the 302ci Cleveland V8. Both were available with either manual or automatic transmission, and various optional equipment. 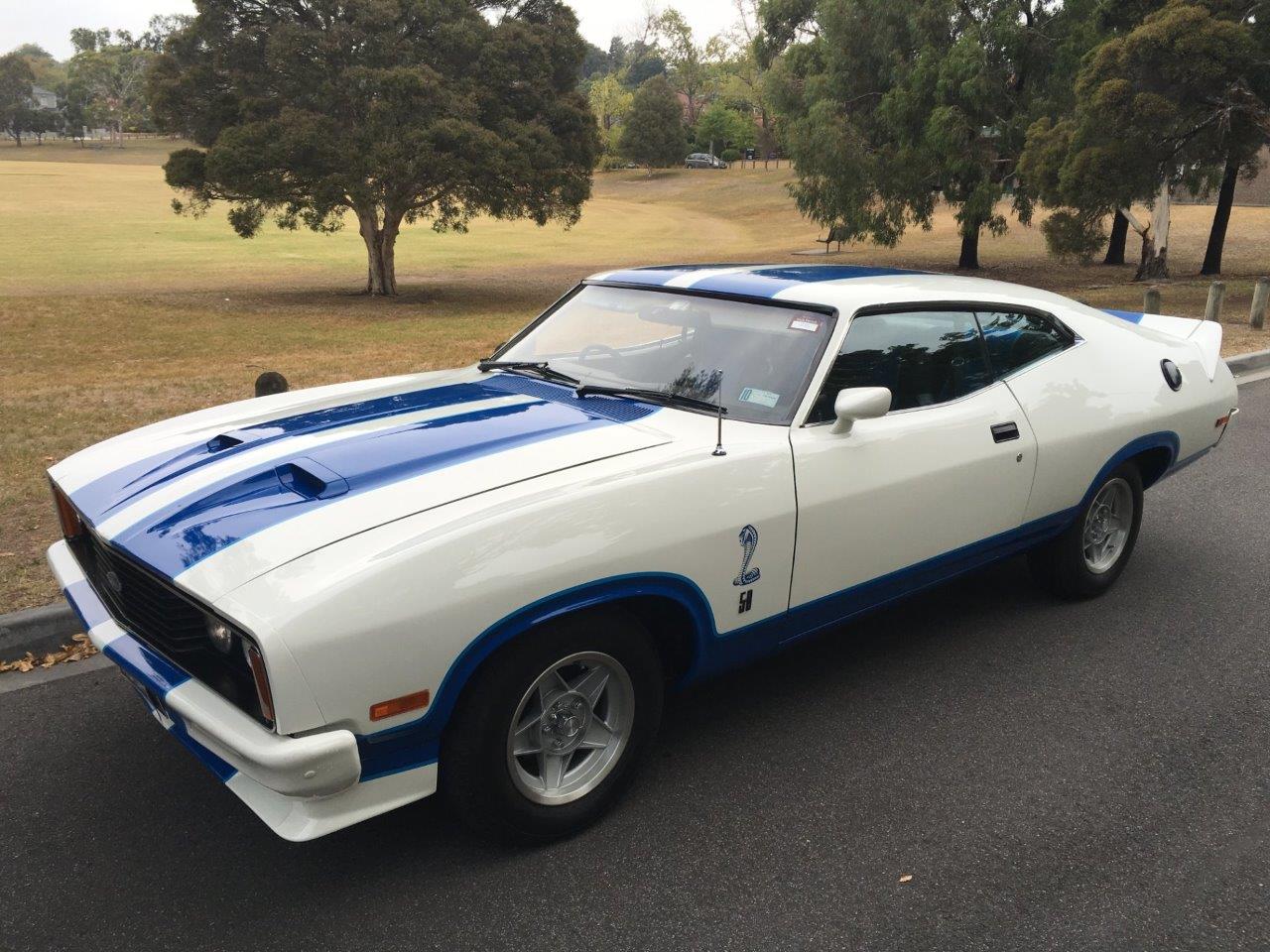 Inspired by the Bigfoot monster truck, the Bigfoot Cruiser special edition of Ford pickups stands out as one of the most impressive conversions. It was available for F-Series trucks and Rangers alike, albeit in very limited numbers. The package included over-30-inch tires, a Warn winch with an Enforcer bumper, a chrome roll bar with lights, and special Bigfoot Cruiser decals. The thing is, most of them were affected by a recall for a faulty cruise control that was prone to catching fire. Furthermore, some of them have already caused serious accidents and the Bigfoot’s bulky appearance (especially huge tires) didn’t really help their owners get away with it. So, Ford decided to take all those fine additions that made the Bigfoot Cruiser cool away. Maybe some of them have managed to escape the recall. Maybe. 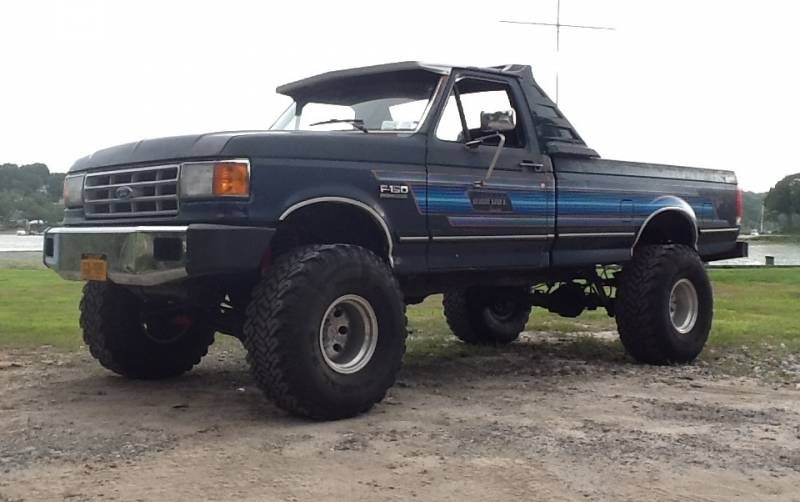 The ski Country Special edition was only available in 1967, and only in 10 dealerships in the Denver area. That info alone should be enough to prove the models rarity back then, and even more so for today. As its name suggests, the package was intended for winter driving, especially around the winter resorts like Aspen. Apart from having winter tires and an equa-lock rear axle, the Ski Country Special also features ski racks on the rear overhang. There was also a luggage rack available in five different colors. Apart from being available with both the hardtop and fastback Mustangs, Ski Country Special was no stranger to Fairlane, Galaxie and Country Sedan too. Still, the special edition numbers were very limited nevertheless. 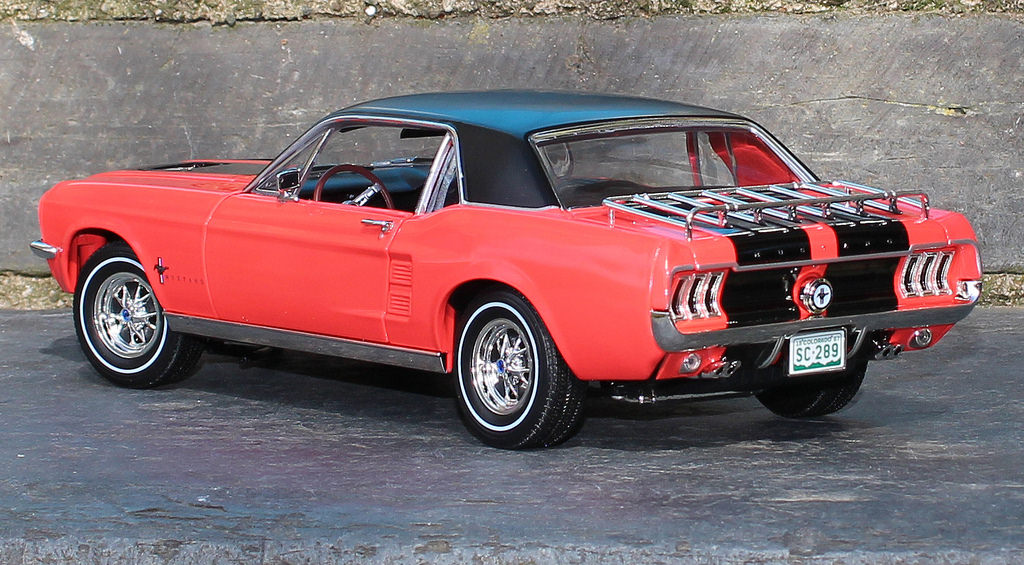 The Free Wheeling package offered during the late seventies wasn’t that limited actually. It spanned across multiple Ford nameplates including the Bronco, F-Series flareside and styleside, Courier, and E-Series Van. Given so many vehicles could have been ordered with the package, the Free Wheeling’s total numbers will likely never be found.

Most vehicles influenced by this special edition came with chromatic multi-color side stripes that were different in every nameplate and year. For ’77, for instance, that was 5-color rainbow stripe. In ’78, the Free Wheeling package was expanded and there would be an A and B option from then until the end of production. The A option was carried over from the last year, while the B option included an additional tubular GT bar and 15-inch Chrome Yellow wheels. The ’79 Flareside and Styleside would receive revised pinstriping, while the ’80 A option now included an optional Tu-Tone paint on flareside trucks. The B option, which was available for 4×2 models, added fog lamps, bumper guards, a bright rear bumper (with a contour on the Styleside and a  channel on the Flareside), 10-hole aluminum wheels, and a handling package, while the 4×4 models received the GT bar and white styled wheels. 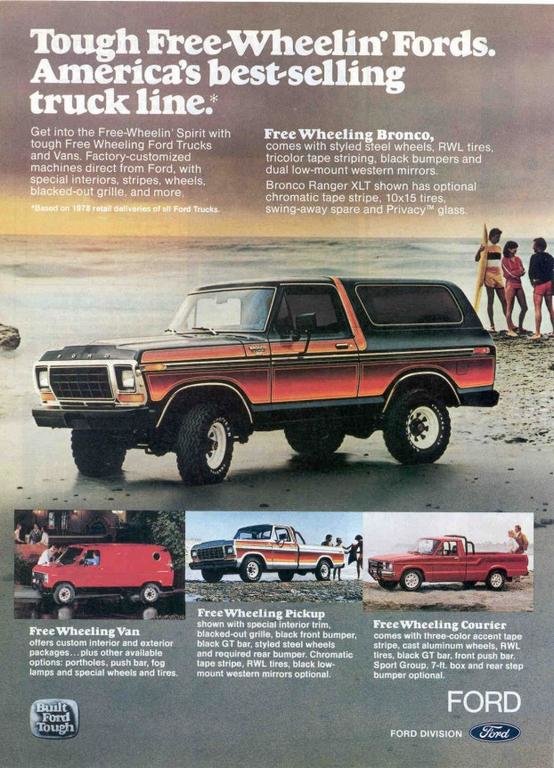