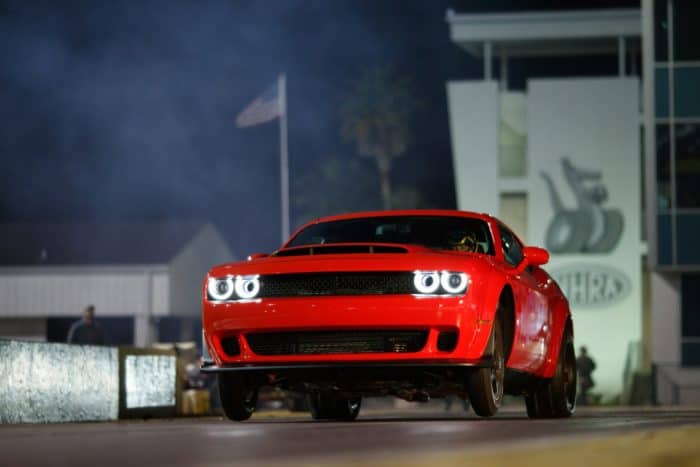 For a very limited time back in 1971 and 1972, the Dodge Dart offered a variant known as the Demon. During the first year of production, the Demon offered 318 and 340 ci engines with the 340 getting extra performance upgrades as well. As government restrictions on fuel consumption began to kick in, power decreased for 1972 and the Demon also offered a slant six option. Unfortunately, the peppy Demon was renamed in 1973 due to enormous pressure from certain groups who disliked the name. Since then, Dodge has only brought the name once in 2007 as a two-door concept. Now, Dodge is resurrecting the Demon and this time it will take the throne as the quickest production car ever built. Ladies and gentlemen, behold the 2018 Dodge Challenger SRT Demon. 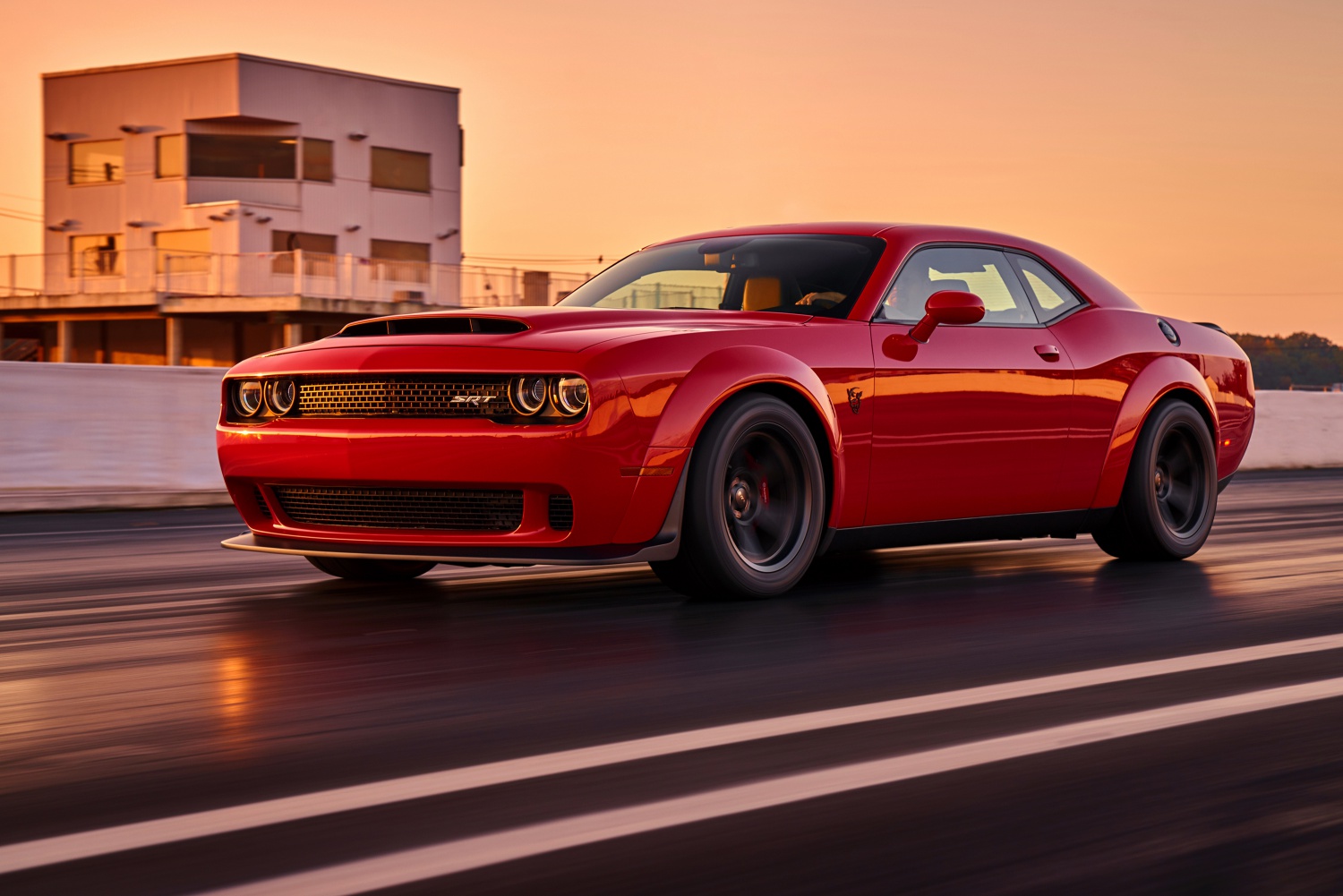 Over the last several years Dodge has rocked the auto industry with the amazing Hellcat. More recently, they have started to share that 707 hp powertrain with everything they can. What once started out in the Challenger made its way into the Charger and now even the Jeep Grand Cherokee will see it in the form of the Cherokee Trackhawk. But the wise powers-that-be over at Dodge wanted more. So they went back to the drawing board to make not just a supped up Hellcat, but a beast that could stand on its own. What they came up with is the record shattering, drag-strip terrorizing, 840 horsepower SRT Demon. 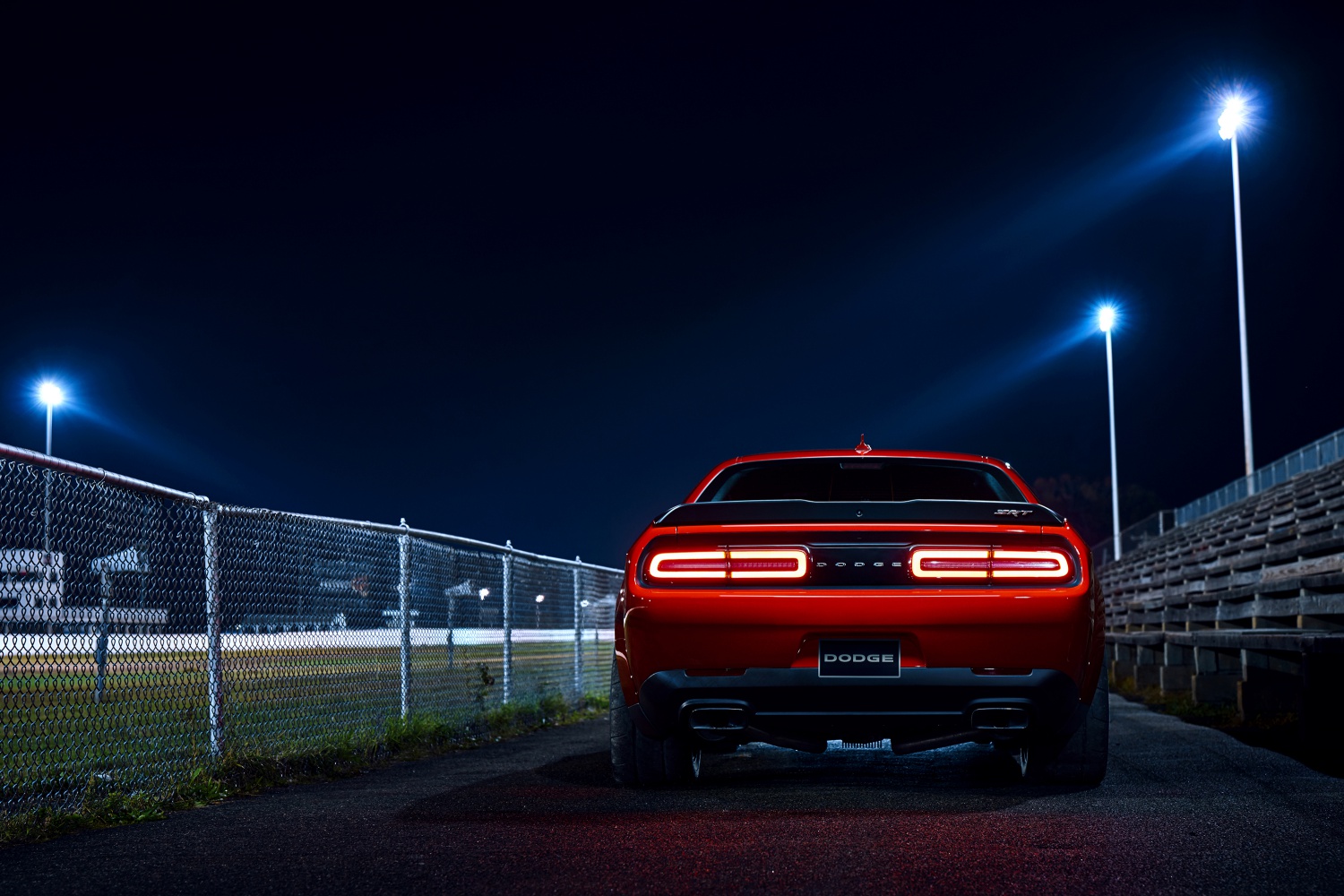 So let’s start with the most important part of the Challenger SRT Demon, the engine. While Dodge began with the 6.2-liter 707hp Hellcat engine as a guide, the Demon has some 25 major component upgrades. This includes the supercharger, rods, pistons, valve train and fuel system. The larger 2.7-liter supercharger (up from 2.3) combined with 14.5 psi of boost (compared to 11.7) and an insane 1,150 cubic feet of airflow (18% more than Hellcat) are just part of what makes the demon produce its monstrous 840hp and 770 lb-ft of torque. All this is mated to the proven 8-speed TorquFlite automatic transmission which has also been beefed up to handle the pressures of the strip. The tranny gets an upgraded torque converter and an increased stall speed. Oh yeah, the Demon also comes with an industry factory car first; a freakin’ TransBrake! 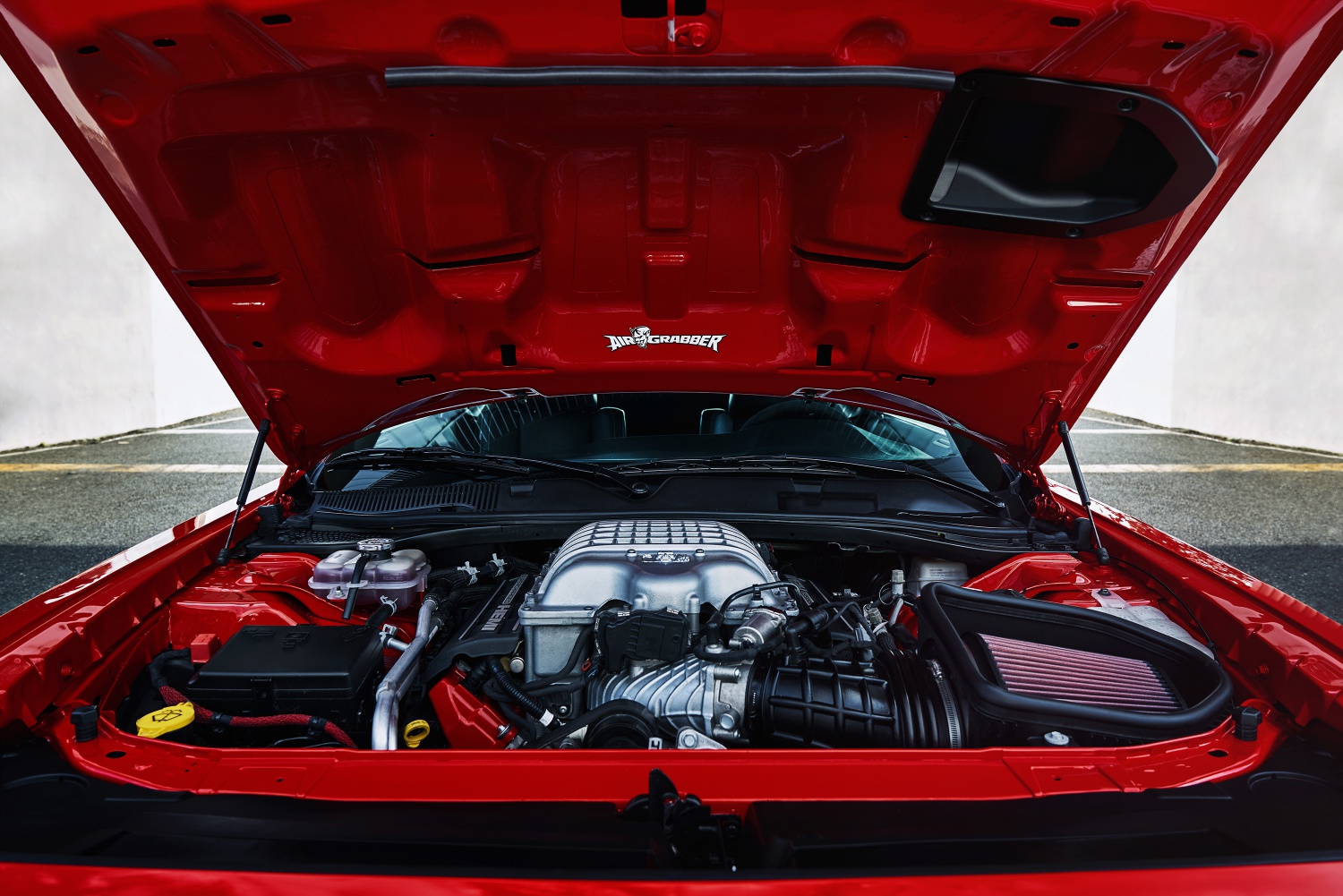 Lucky for us, Dodge didn’t stop there. They wanted to make sure the SRT Demon obliterated every other production car at the drag strip. To do so, they didn’t mate the famous hemi to some new-age electric motor and battery pack. Instead, they designed the engine to run off both premium and 100+ octane racing fuel. This function, however, can only be unlocked with the help of the powertrain control module provided in the nifty Demon crate which comes with the car. In other words, special tuning allows the engine to figure out which octane it’s running and adjusts power accordingly. For example, without the powertrain module, the car will produce 808 hp and 717 lb-ft of torque on 91 octane. Or, if the black key fob is used, the engine limits itself to “only” 500 hp similar to the different keys on the Hellcat. 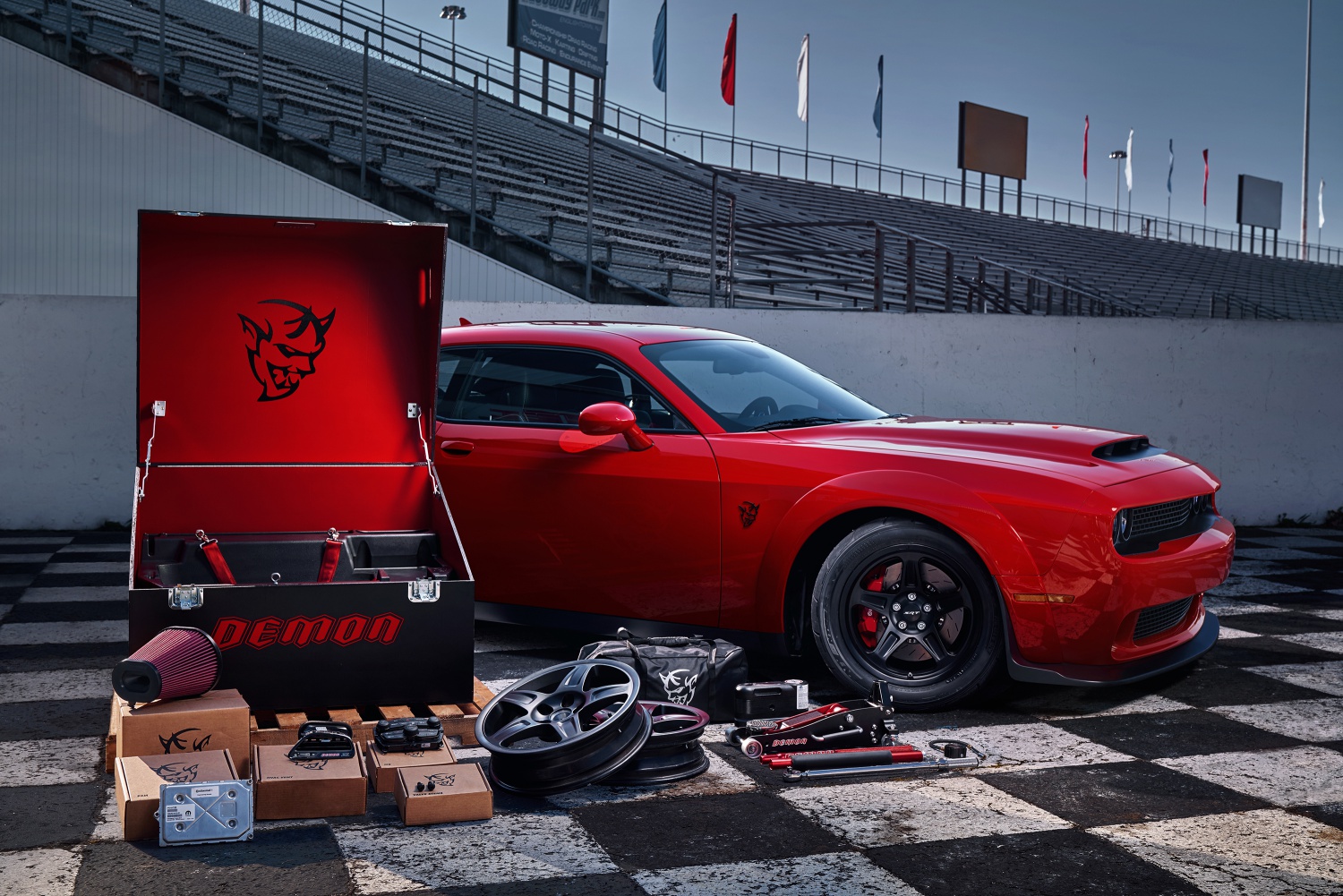 In addition to the engine, transmission, and fuel system the rest of the Demon was also optimized for the strip. For example, the first ever street legal drag radials were added and boy are they beefy. In fact, the massive 12.6-inch wide 315/40R18 Nitto NT05R tires are so wide the SRT Demon needed wide-body fender flares to fit them in. Speaking of the exterior, earlier I mentioned the 1,150 cubic feet of air that is fed every minute to the engine. Well this is in part due to the massive 45.2 square inch Air grabber hood scoop which is apparently the industry’s largest on any production car. Is 840 hp really that impressive though if the car remains the “fat cow” of the big three muscle/pony cars? Probably not, which is why Dodge stripped down as much weight as they could including deleting the rear and passenger seats (though they are available for just $1). They also removed the speakers, parking sensors, opted for a manual tilt/telescope steering wheel and several other items. All this lead to a 200+ pound weight loss. 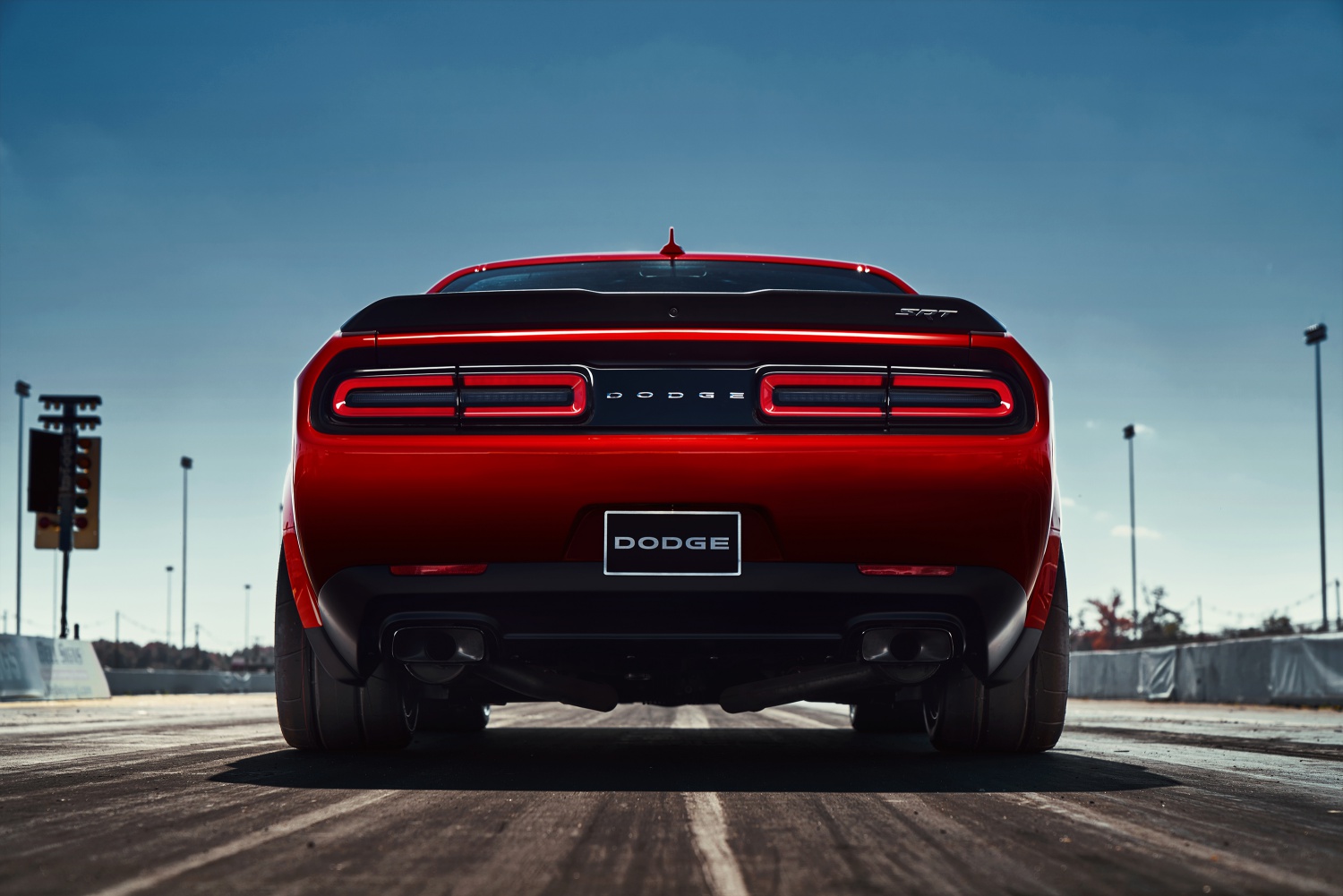 So we have a lighter weight, higher powered, air-guzzling, race fuel drinking, sticky tired beast. All that produces a sub 10-second quarter mile car. Specifically, an NHRA certified 9.65 second, 140 mph strip time. This makes it the world’s fastest quarter-mile production car and also bans it from NHRA events for being too fast without a roll cage. Take THAT Tesla! It will also do 0-60 in a blistering 2.3 seconds. Let’s name a few other amazing facts about the 2018 Dodge Challenger SRT Demon. It has the highest g-force acceleration of any production car at 1.8g, first ever front wheel lift on a production car, and first ever factory liquid-to-air intercooler and after-run chillers to name a few. 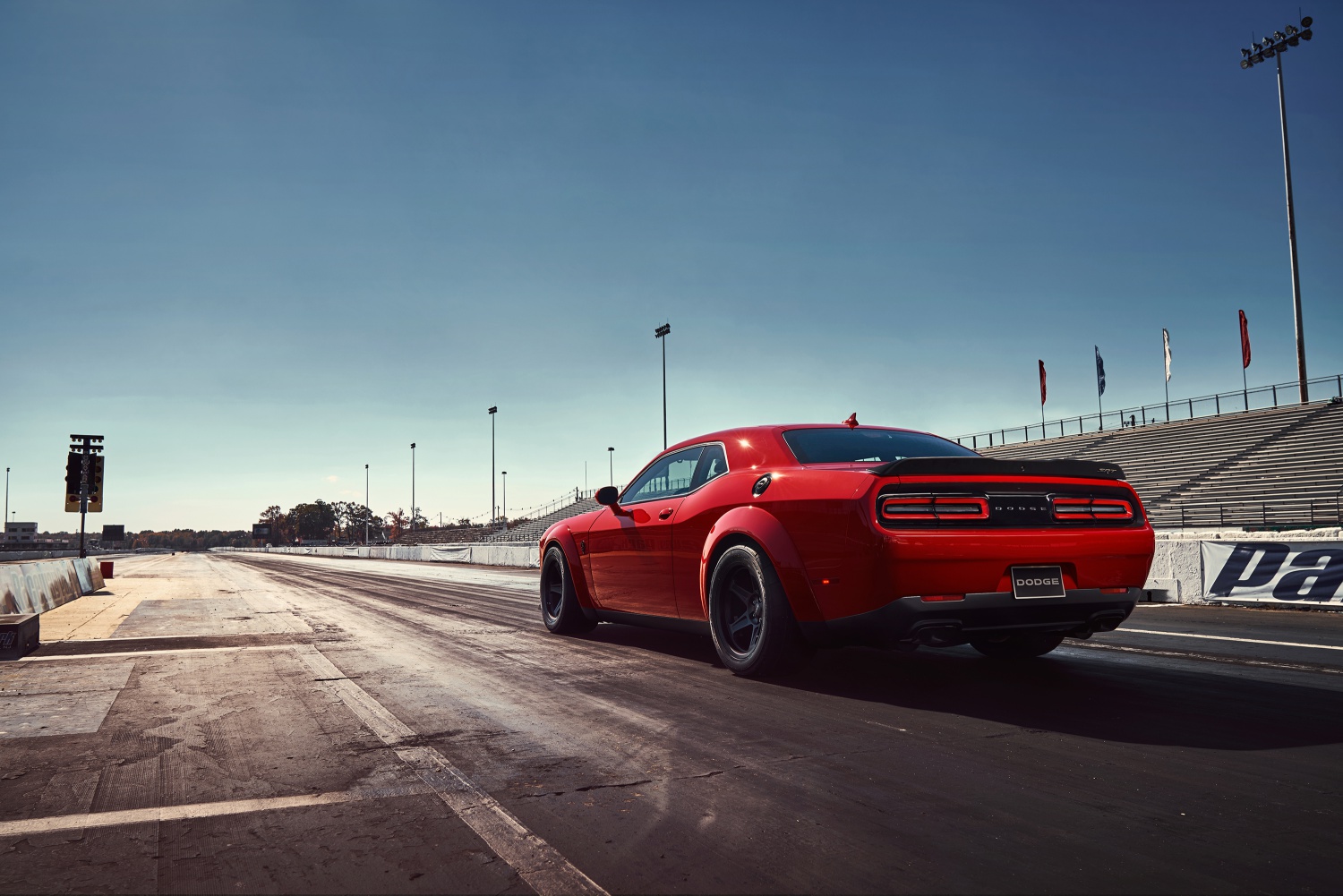 Honestly, one could read the stats multiple times and find a new exciting option with every pass. While the platform is aging and the Challenger is likely approaching the end of the current body’s lifespan; the Demon sure is one heck of a way to go out with a bang. Limited to just 3,000 cars in the U.S. and 300 in Canada the 2018 Dodge Challenger SRT Demon should start arriving at dealerships this fall. Pricing hasn’t been announced yet, but expect it to be quite a bit above the Hellcat which starts at $64,195. I mean, all the engineering and upgrades that have gone into this thing will likely price it awfully high, not to mention the extreme likelihood of extra dealer markup. Either way, this is an impressive vehicle from Dodge and makes me eager to see what is next!