Let’s appreciate the fact that the contenders to this drag race brought their A- game on, in nothing but 100 % pure factory stock condition (Anything less would be an insult). That being said, I know it does nothing to put out the raging debate between the two greats but I hope it will at least simmer it down to a reasonable level.

The battle between the Dodge Challenger Hellcat and the Chevrolet Corvette Z06 was only a half- mile long but it was nothing short of spectacular with America claiming victory.

Surprisingly, these two drag racers opted to go for a single run as the ultimate measure of the strength of their 6.2-litre supercharged machines. However, it is common for racers to choose a three out of five or a two out of three approach –Just to be sure of a definitive conclusion.

That aside, the battle was deliciously exhilarating. More so because the petrol heads watching the race decided to go loud and wild for the Mopar machine – which emerged as the clear winner in this part of the fight for the noise. But why take my word for it? You have to check out the video to believe it. Crank up the volume and join in on the noise.

In the video, you will see how the Hellcat experiences a hefty wheelspin shortly after the race begins. However, the driver is already in the know that launching a Hellcat with or without an automatic tranny is as easy as moving mountains. That is why the carmaker is still working on the Challenger American Drag Racer. Feast your eyes on the awesome shots we took of the Hellcat vs z06.

On that note, the Challenger ADR prototype test cars are yet to get their factory wide body kit which we haven’t spied yet but which will definitely change the game. 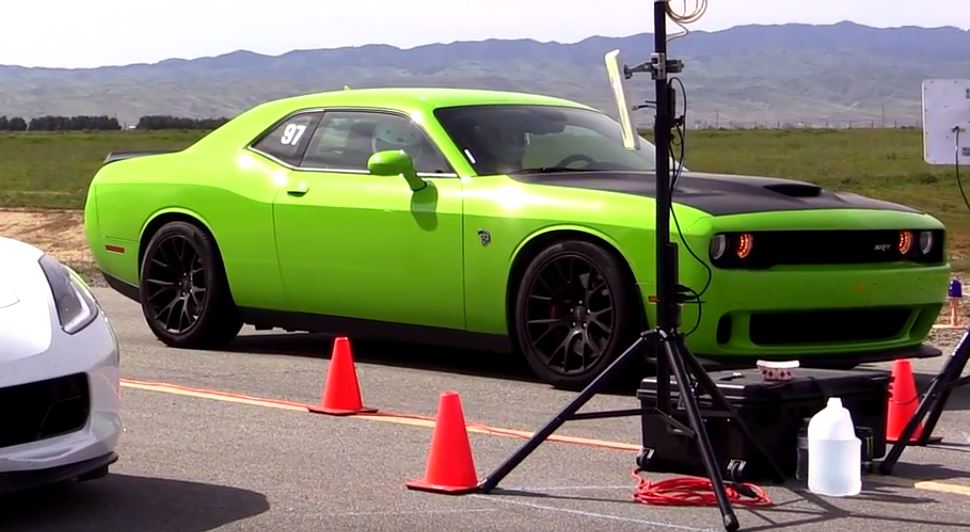 
8 Reasons Why The American Ford Mustang Is Better Than The E...
Race Fans Work at the Track, But Never See a Race in Person
Do You Hear What I Hear? 2020 Hemi V8 Mopar Ugly Holiday Swe...
Burnout In A Box: 807 HP Dodge Redeye Crate Motor
Ricky Bobby Strikes Back: Dodge, Sony Collab on Film's Anniv...
The 7 Ugliest Ferraris of All Time