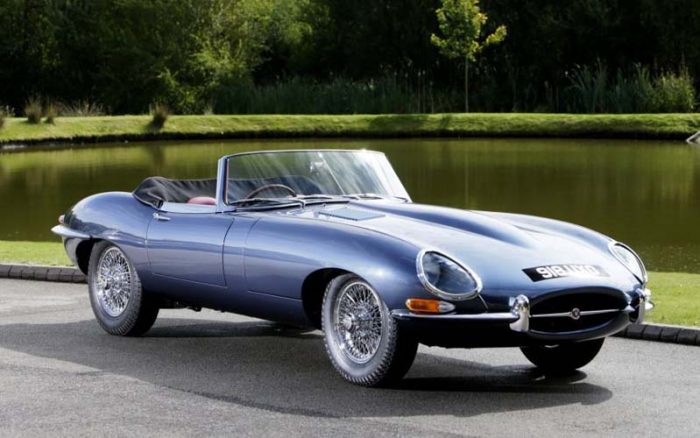 British sports cars are known for their beautiful, graceful lines and superb handling, often in contrast to the more muscly brute power of U.S sports cars. Over the years, Britain has produced some of the loveliest cars ever built and Americans (especially after WWII) snapped them up.

American GIs were introduced to British sports cars during the war and found them very much to their liking. After they returned home, the demand for models like the Morgan 4/4 skyrocketed. Britain obliged by cranking up their export machine. During the 1950s British automakers built 522,515 cars and 397,688 were exported to America.

There’s something quite magical about the best classic British sports cars. There have been plenty of classic British car models out there, but there were a few that were more than a cut above the rest. Imagine them now, zooming along narrow English roads, gears working their way through a manual transmission gearbox, reflecting the sun off of their British racing green bodies. They’re the epitome of classic cars, aren’t they? From the legendary Triumph TR6 and Jaguar XKE, to the more common Mini Cooper, these old English sports cars come with buckets more character than the new car models on sale today. These aren’t just top 10 cars, they’re the best British sports car models of the last 100 years, and many of them have won car of the year awards in their own right.

We have put together a list of the most iconic British sports cars ever made. Unfortunately, while many of these vehicles were fairly affordable when they hit the market, most are now out range for everyone except those with truly huge budgets. 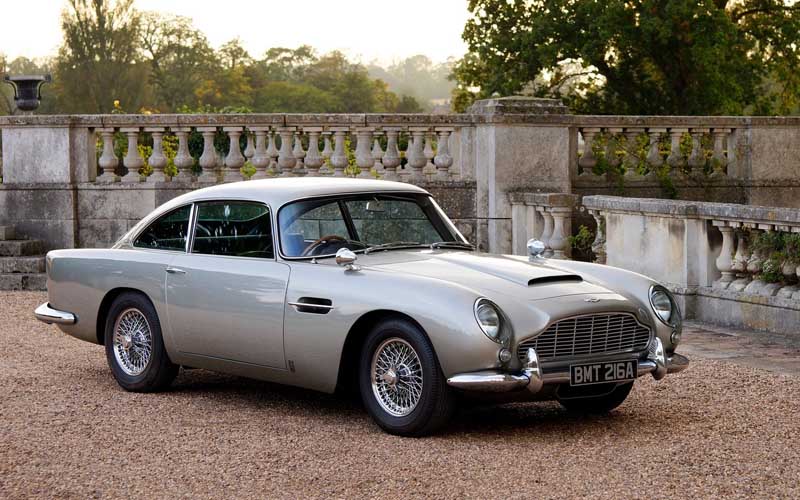 The ride that James Bond made a household name has been called the Most Famous Car in the World. The DB5 was originally released in 1963 as a luxury grand touring car.

The DB5 has an all-aluminum 4.0 L engine under the hood paired to a ZF five-speed transmission. It produced 282 horsepower and pushed the DB5 to 145 mph. The high-performance version, the DB5 Vantage was released in 1965 and pushed the horsepower up to 315. A convertible version was also offered from 1963 to 1965.

The interior was extremely luxurious for its time with wool pile carpet, reclining seats, leather trim, electric windows and a fire extinguisher in case you set your DB on fire. Twin fuel tanks, oil cooler, and chrome wire wheels upped the luxury factor even further.

If you are hoping to put Bond’s car in your garage you better have deep pockets. The original one, used in Goldfinger and Thunderball, was sold by RM Auctions in 2010 for $4.6 million. 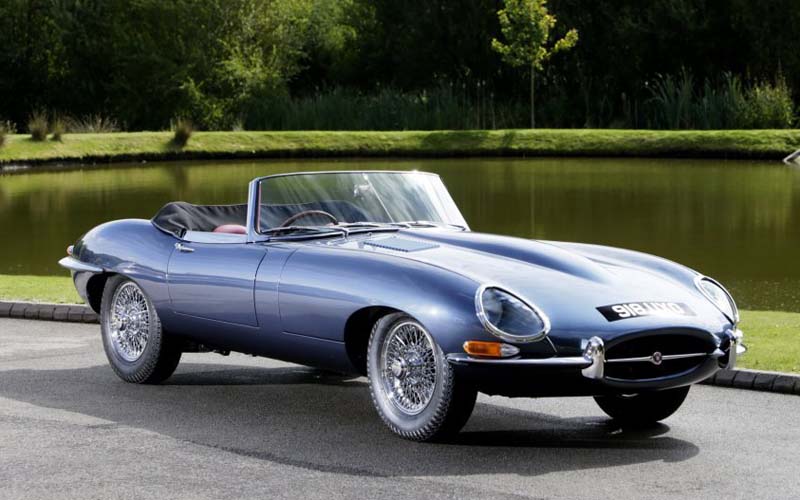 When many people hear the phrase British sports car, the Jaguar E-type will pop into their heads. The E-type was also called the Jaguar XKE and it hit the market in 1961. It’s artistic, exotic and sporty body was just the tip of the sports car iceberg.

The E-type came with a 3.8-liter inline six-cylinder engine with three carburetors, which cranked out 265 horsepower and 240 ft-lbs of torque. It could hit 150 mph and go zero to 60 in roughly seven seconds. 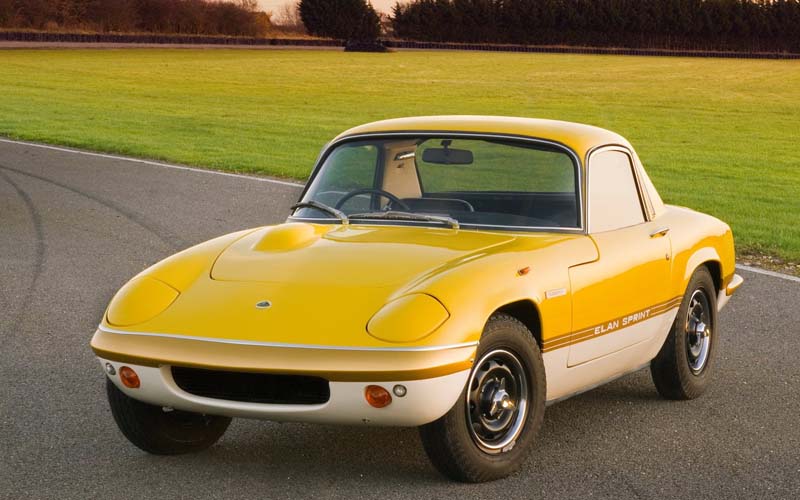 This was the first Lotus to use a steel backbone chassis design combined with a fiberglass body, which made it extremely light (1,500 pounds) and rigid. This body design gave it a very agile stance and handling that was simply amazing. The Elan was introduced in 1963 as a convertible and a coupe hit the market a couple of years later.

The main downside of the Elan was safety. The fiberglass body offered little protection in an accident.

It came with a 557 cc double-overhead cam engine, four-wheel disc brakes, rack and pinion steering as well as a four-wheel independent suspension which made it very high tech for the time. The two-seat version was produced until 1973 while the 2+2 model hung around until 1975. 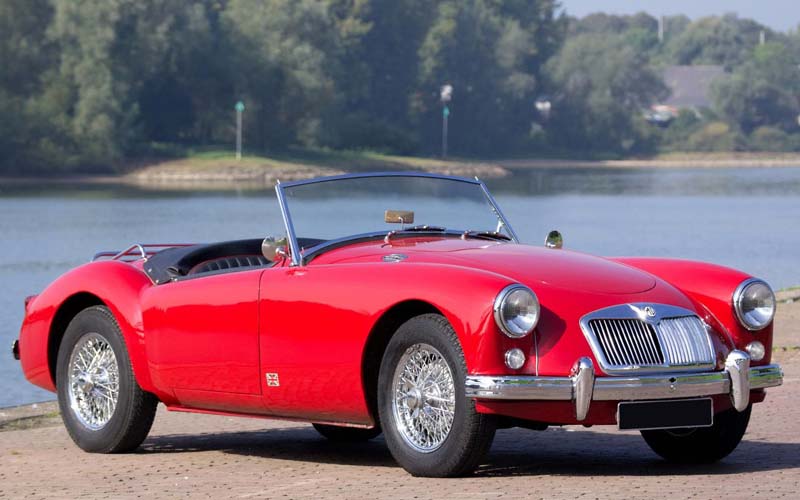 The MGA was a major departure from MG’s previous vehicles when it was introduced in 1955. It was sleek, sexy, wider and sat lower than their previous cars and it ended up being a major hit, at least with overseas buyers. The MGA was produced until 1962 and of the 101,081 units produced, a mere 5,869 were sold in Britain.

The MGA was a beauty but less then impressive under the hood. A 1.5-liter 68-horsepower engine was paired to a four-speed transmission that pushed the MGA to a top speed of 98 mph, hardly head turning performance.

The MGB took over in 1962 and was one of the first cars ever built with crumple zones to help protect the driver and passengers. Just like its predecessor, the majority of MGBs were exported to the United States. Performance improved a bit with the MGB managing zero to 60 in 11 seconds which seemed much faster than the MGA which took 16 seconds to hit the 60 mph mark. 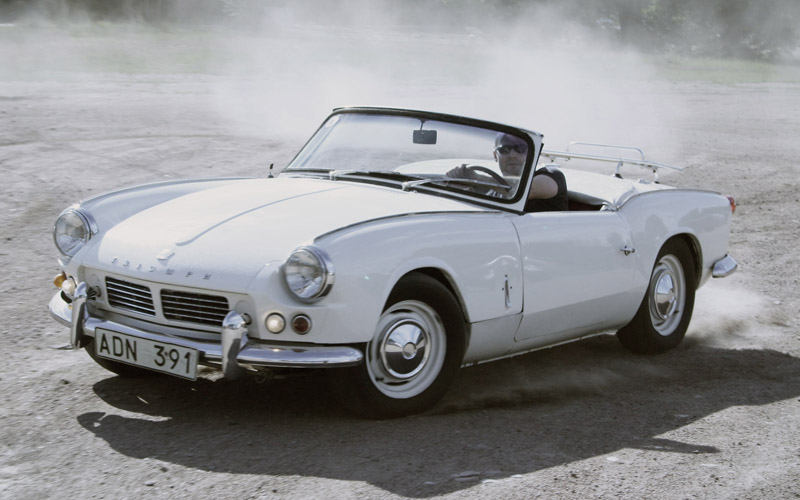 The Spitfire should be very familiar to U.S. car enthusiasts as 314,000 units were produced between its introduction in 1962 and 1980 when it was finally retired. Many of these vehicles ended up in the U.S market. The Spitfire was an answer to the Austin Healey Sprite, which was a best seller at the time.

The Triumph was not a speed demon, it came with an in-line four cylinder that put out 63 bhp and managed a top speed of 92 mph. It took the Spitfire 16.4 seconds to go from zero to 60.

The interior was pretty basic with a plastic steering wheel, roll-down windows and rubber floor mats coming as standard equipment. Still, it was one of the most beautiful cars to come out of the Triumph factory, when Triumph still made automobiles. 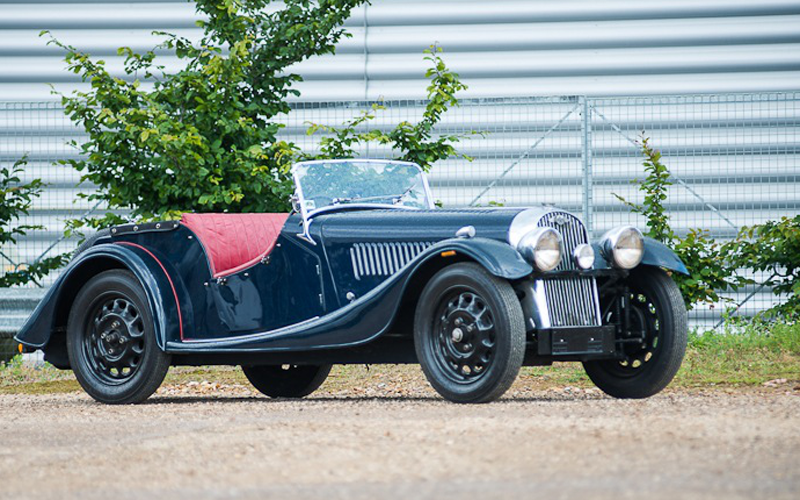 The Morgan is one of the most iconic of British sports cars in history, having been in production from 1936 until the present day. Its flowing body is lightweight and the skinny tires make it an extremely agile and nimble car. The Morgan 4/4 is the longest running production vehicle in world.

The original Morgan was outfitted with a 122 cc Coventry Climax engine with 34 bhp, which was paired to a four-speed Meadows gearbox. Engine specs have changed over the years with a 1.8-litre Ford engine being dropped into the Morgan in 2004.

The 4/4s striking good looks and not its performance have led to its iconic status. In 1956, the Morgan hit a top speed of 75 mph and took a whopping 26 seconds to get up to 60 mph from a dead stop. 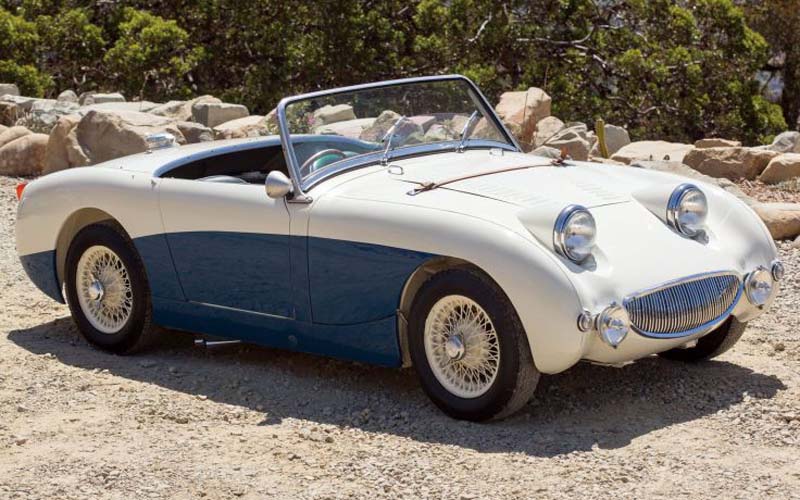 The Sprite was affectionately called the Frogeye in England and the Bugeye Sprite in the United States thanks to the headlights that popped out of the hood. The original design called for the headlights to retract into the hood but the cost of that option was prohibitive.

Like most of these iconic British sports cars, it was not outfitted with a huge performance loving engine. The Austin Healey Sprite was intended as a cheap sports car and came with a 948 cc engine that produced 43 bhp. This less than exciting engine pushed the Sprite to a top speed of 82.9 mph and took 20.5 seconds to get up to 60 mph.

The Sprite had no exterior door handles, it required drivers and passengers to reach inside in order to open the doors. There was also no trunk lid, drivers needed to tilt the seats forward to gain access to the spare tire or stow luggage.

The Sprite was manufactured from 1958 to 1971 and went through four generations during that time. 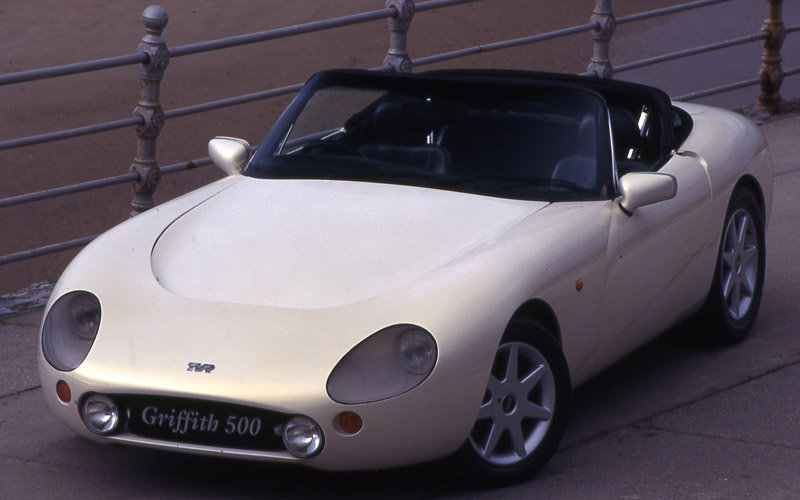 The Griffith is a bit more modern compared to our other picks. It was first introduced in 1991 and was produced until 2002. It’s lightweight (it had a fiberglass body) graceful design and large engine made it a high-powered sports car that was fun to drive and a delight to the eyes.

The original Griffith was a two-door, two-seater that was powered by a 4.0 L 240 hp V8 engine and paired to a five-speed transmission that could hit 152 mph and go from zero to 60 mph in 4.7 seconds. 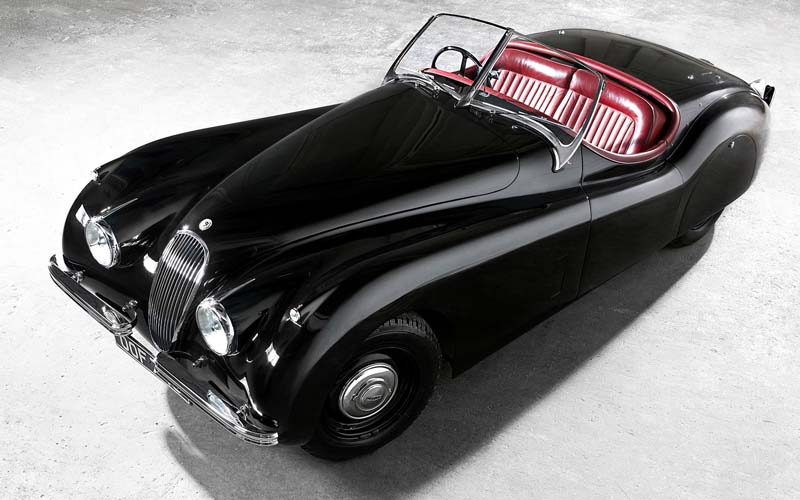 An iconic British sports car list would not be complete without at least two Jaguars and this one is a beauty. It was originally introduced as a concept car in 1948 but it was so popular at the show Jaguar decided to put it into production.

The XK-120 featured an XK inline six-cylinder 3.4-liter engine that cranked out 160 horsepower. It could push the car up to 120 mph, which made it the fastest car in the world at the time. The body is hand-built from aluminum as are the doors, trunk lid and the hood. The XK-120 is offered as a two-seat convertible or a two-seat coupe.

The XK120 stayed in production from 1948 to 1954 and 12,055 vehicles were produced during that time. It was one of the most refined British cars ever made. 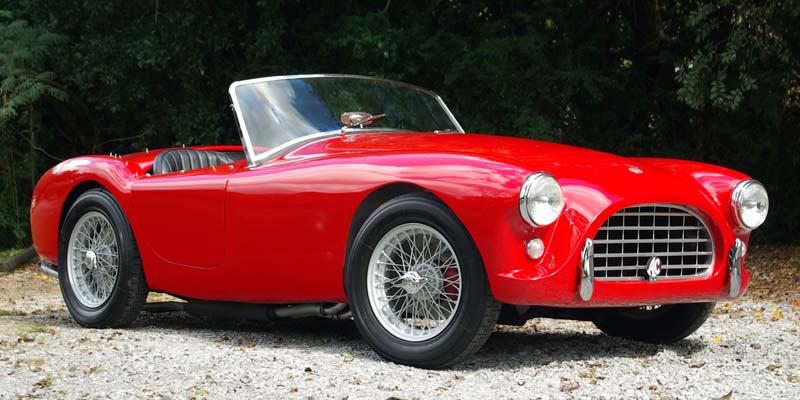 The AC Ace is not as well know as many of the vehicles on our iconic British sports cars but it was a great looking vehicle and a decent performer which later transformed into the AC Cobra. It employed a ladder type tubular frame and a two-liter overhead cam straight-six engine that produced 100 bhp. The Ace is capable of a 103 mph top speed and cranked up to 60 mph in 11.4 seconds.

Carroll Shelby approached AC in 1961 about dropping a Ford V-8 in to the Ace body and the AC Cobra was born.