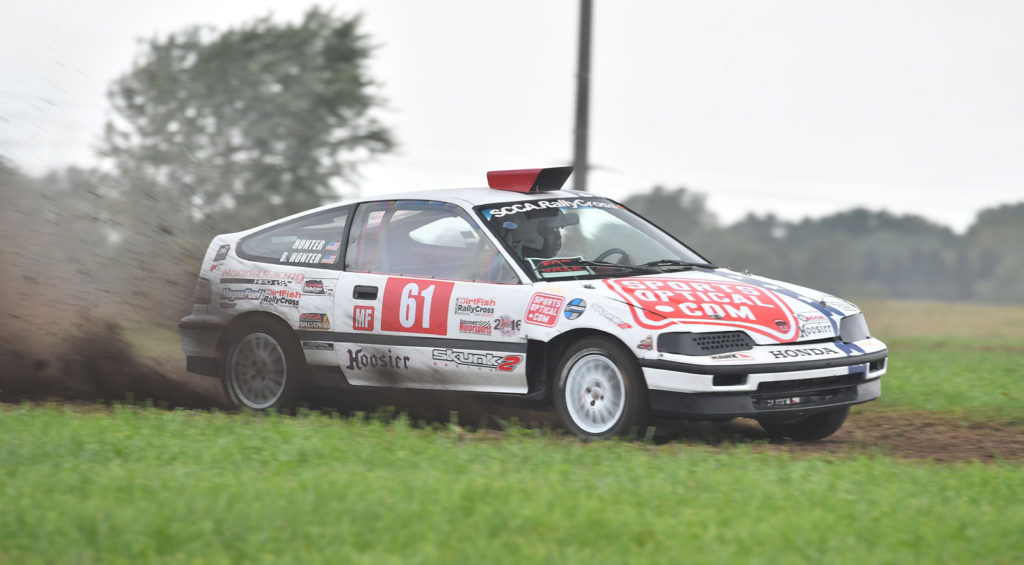 A few months ago I wrote an article about how rallying has struggled to gain a foothold in the U.S. For all of its high-performance thrills and spills, often in heavily-modded production cars, rally racing has never earned more than a cult following stateside. But all that could change through an exciting and accessible derivative of rallying called rallycross.

A mesmerizing spectacle in itself, rallycross could also be America’s “gateway drug” towards embracing full-blown rally racing. And a U.S.-specific form of rallycross sanctioned by the Sports Car Club of America (SCCA) makes actually competing, behind the wheel, an attainable ambition for many.

With events often being held in remote locations, and cars racing against the clock rather than “door-to-door,” rallying has proven hard for American motorsports fans to get into. And actually participating as a rally driver is way too expensive and complex for most of us to even consider.

“Rallycross is a form of auto racing that was bound from the principals of stage rally,” explained Trevor Wert, Director of Marketing at Washington-based rally-centric automotive entertainment organization DirtFish.

“The cars are based on similar platforms, but with nearly double the horsepower. The biggest difference is that while stage rally takes place on closed public roads with one car at a time racing against the clock, rallycross takes place on a circuit that is made up of gravel, tarmac, and jumps.”

Rallycross began as a TV show aired on ITV’s World of Sport program in the UK. It quickly gained interest, and television coverage, in Britain. Within a couple of years, it had spread to mainland Europe. Today it’s mainly popular in the Nordic countries, the Netherlands, Belgium, France, and the UK, but rallycross races are staged all over Europe.

“Drivers race door-to-door with up to eight cars at a time … The cars are purpose-built with 600 horsepower [and] massive amounts of suspension travel,” said Wert.

“This sport truly caters to the shortening attention span of the younger generation of motorsports fans because it is all contained in one compact location, the cars are based on small affordable cars, [and] it’s high action with a little bit of bumping and pushing allowed.”

Plus, unlike NASCAR which requires multiple hours to watch a single race, each rallycross race lasts for a maximum of just ten laps, so most times less than 15 minutes.

Rally America began sanctioning European-style rallycross events in the US in 2009. But the sport is yet to maintain a mainstream presence here.

The Global RallyCross Championship, sponsored by Red Bull, began in 2011 and featured popular drivers like Ken Block, Travis Pastrana, and Tanner Foust. It expanded over the next couple of years, with Ford, Hyundai, Subaru, and Dodge fielding teams, and events spreading to Europe and Brazil.

Now called the TitansRX International Europe Series, it was replaced in North America by the Americas Rallycross Championship in 2018. But this folded in late 2019, after just two seasons, apparently due to lack of sponsors.

A closed-format circuit race dubbed “Rallycross” was even a feature of the X Games for a few years, beginning in 2010 (initially under the name “SuperRally”). But this featured a morphed format that moved away from true European rallycross.

“Drivers would compete against each other on a ‘Super Special’ where they either had a course that mirrored each other or closed over each other,” said Wert. “So it was side-by-side, just not door-to-door.”

The SCCA began its RallyCross program in 2004. This is similar to its “Solo” American autocross program – wherein cars navigate a mini-road course on a large paved surface, against the clock – only on a non-paved course. Think a scaled-down version of a rally stage, where the course is delineated by traffic cones rather than by trees or rocks.

“[SCCA RallyCross is] great because it is a low-level grassroots motorsport that nearly anyone can enter in nearly any car,” said Wert. “There are very few safety regulations because it’s done in a safe environment where there are less immovable objects to hit and the speeds are lower. We’ve even seen some people bring rental cars!”

Entry fees and equipment requirements are considerably less in SCCA RallyCross than in any other form of performance rally. At most events, a driver needs only show up to register with a safe hardtop vehicle and the entry fee. In many SCCA regions, there are even loaner helmets available, and someone is usually on hand to guide first-timers through the whole process.

Rather than going door-to-door alongside other cars, SCCA RallyCross drivers go one at a time through a timed course that is typically very technical. Speeds are low, and the only thing to collide with is cones.

There are a huge amount of SCCA RallyCross events around the U.S., divided by SCCA regions. The DirtFish SCCA RallyCross National Challenge and Championship bring together the top drivers from each region to compete against one another (“Think of it like the playoffs and Super Bowl of SCCA RallyCross,” said Wert).

“SCCA RallyCross is absolutely a ‘gateway drug’ for the dreamers,” said Wert. “It’s a great way to get an understanding of the car control needed to be successful and smooth, but it also gives you a taste of what the preparation for a race looks like. Plus there is a lot of really close competition, so you’ll always be striving to do better and better.”

Getting Involved in Rallycross

If you’re interested in European rallycross, the best place to watch this stateside is on the YouTube and Facebook pages of organizations like FIA World RX and other European championships. DirtFish.com carries all the rallycross news and insights, and Wert reported that it has plans to add live rallycross racing in 2021.

For wannabe rally drivers, SCCA.com and DirtFish’s rally driving school are the places to start. Headquartered just outside Seattle, DirtFish has educated more than 12,000 drivers on the skills required to drive a rally car, or any vehicle on a loose surface, since opening in 2010. In January of this year, they established DirtFish Media, a rally-focused content platform hosted on DirtFish.com full of news and information on the sport worldwide.

The Future of Rallycross in America

While SCCA RallyCross continues to thrive, the immediate future for European-style rallycross in America is unpredictable, according to Wert.

“It’s difficult to say because the past rallycross championships that have operated in the US have disappeared for various reasons,” he cautioned. “That said, there is another series in the works that essentially rethinks the sport of rallycross and gives the fans that hardcore action they want to see. Think of it like Supercross but with cars!”

Do you fancy yourself as the next Travis Pastrana or Sébastien Loeb? Hit up the SCCA and/or DirtFish to see if you might have what it takes.


50 of the Coolest and Probably the Best Trucks and SUVs Ever...
50 Years of Range Rover Celebration at 2020 Goodwood Festiva...
7 Celebs with the Best Car Collections
Ford Mustang is World's Best Selling Sports Car
10 Forgotten Classic Buick Models That Probably Deserved Bet...
Watch A Toyota GR86 Drift Around an Abandoned Mall