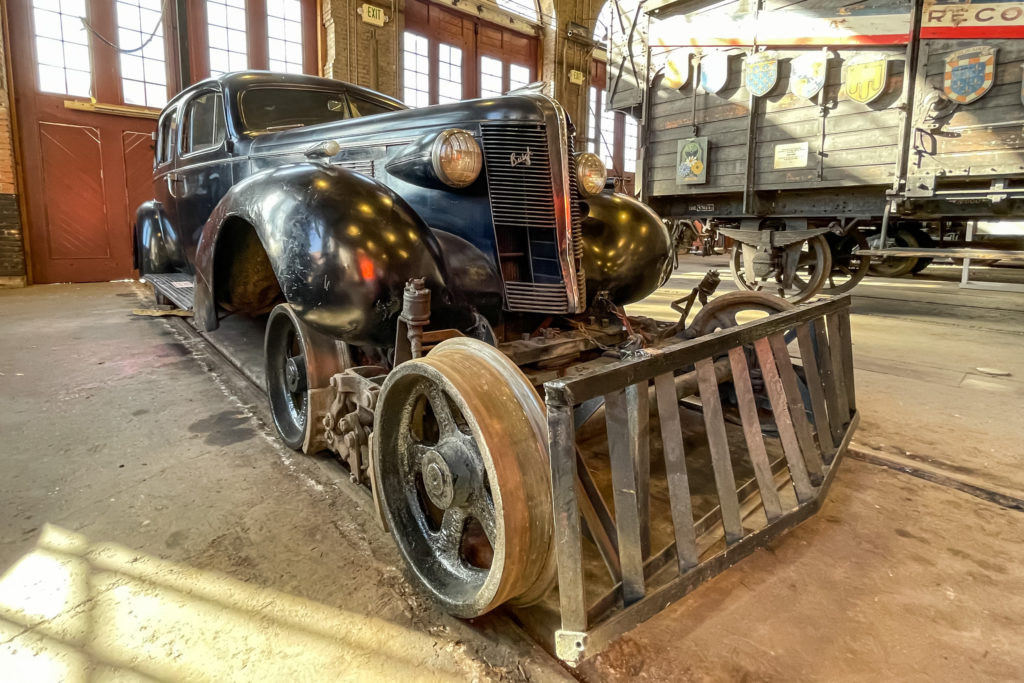 The Ma & Pa 101 Buick Roadmaster railmobile is a time capsule of automotive, locomotive, and American history. Let’s dive into what this unique creation is all about.

Seen through a 21st Century lens, a 1937 Buick Roadmaster is a vision of art deco elegance, an old Hollywood gangster’s getaway wheels, or, more realistically, a doctor or banker’s car. So why does this one look like a dieselpunk fantasy machine?

It was simply a case of form following function. Railroads often converted automobiles into self-propelled railmobiles to perform jobs like track inspection, without mustering an entire train. A steam locomotive requires a crew to operate, a great deal of fuel, and can take hours to start from cold. All of which translates into a big expense. A nimble railcar that started on the button saved time and money. 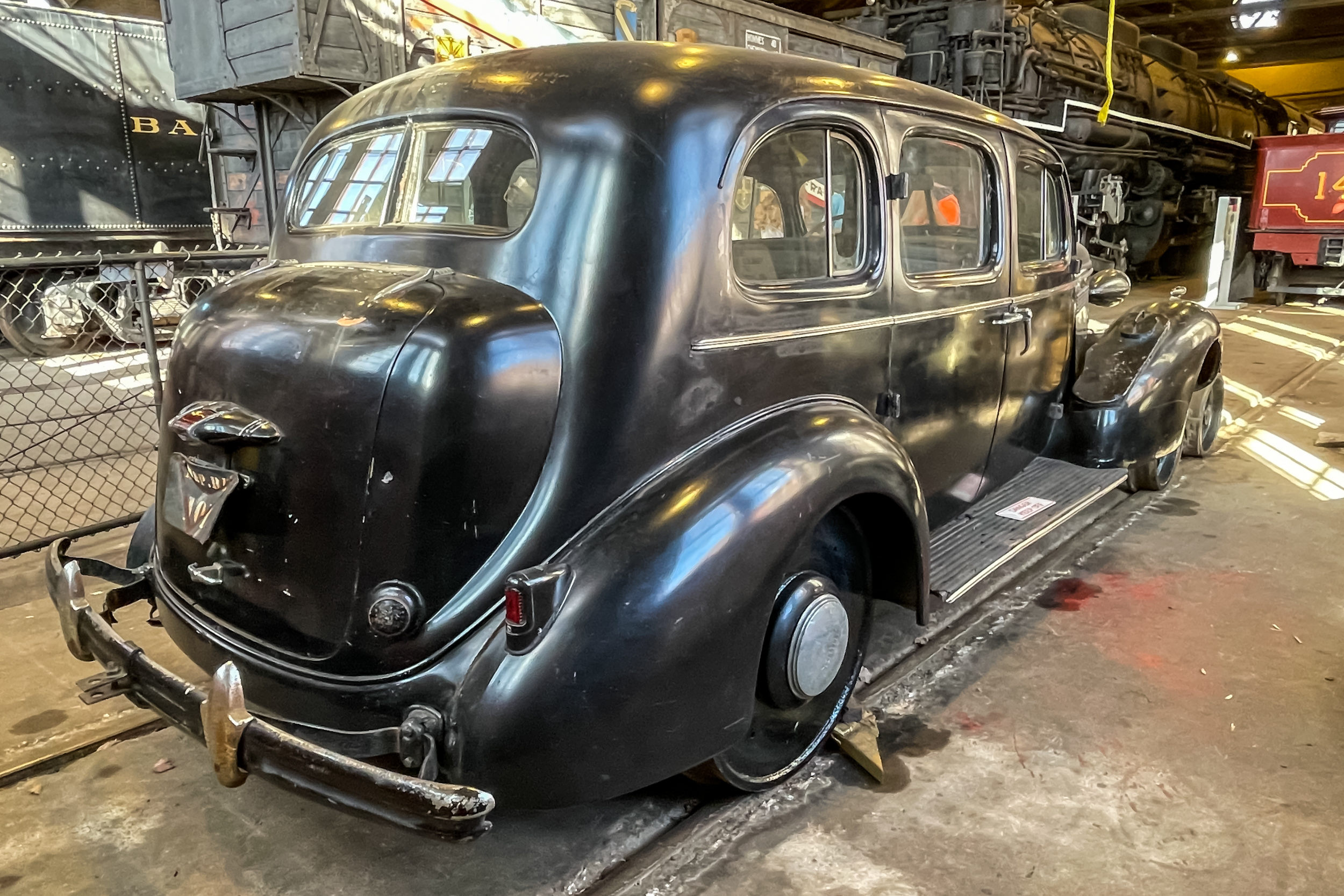 The Maryland & Pennsylvania Railroad was a small, but picturesque, 77-mile shortline operating between Baltimore, MD and York, PA. Never burdened with an embarrassment of riches, the “Ma & Pa” had to make the most of their equipment. The line had been using automobile-based inspection cars for some years, and in 1942 began looking for a replacement for their 1925 Rickenbacker track inspection car.

The Second World War was getting underway and the nation’s industrial power was focused on the war effort, there would be no new cars for the duration. The Ma & Pa probably wouldn’t have bought a new car anyway, when secondhand would do.

They purchased the then 5-year-old Buick from Harkins Funeral Home in Delta Pennsylvania and converted it to ride the rails at their Falls Road shops in Baltimore. 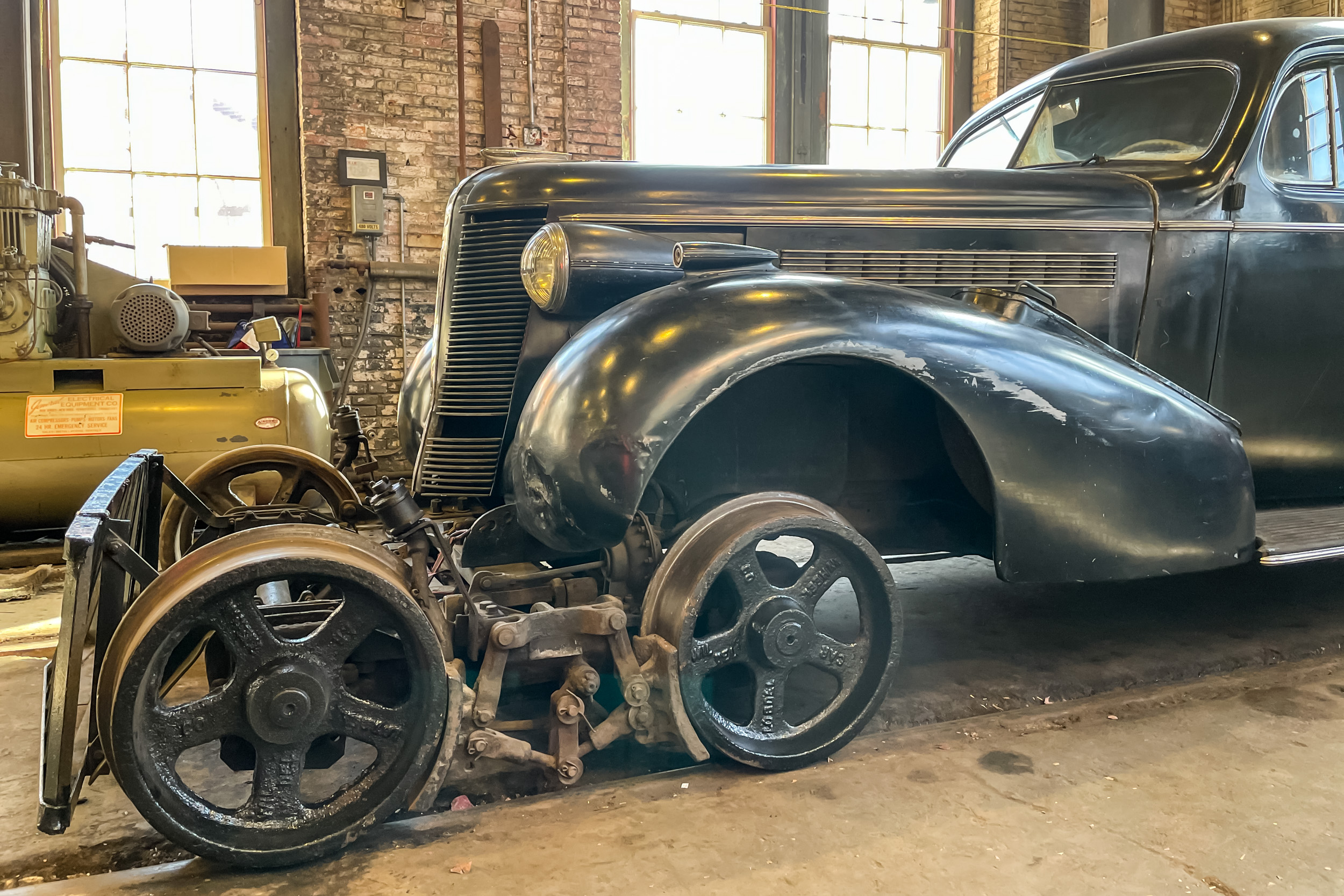 The car’s front suspension was jettisoned and replaced with a four-wheeled truck, much like the pilot truck of a steam locomotive, complete with “cowcatcher.” The entire assembly swivels on a central pivot to guide the car along the curves of the railroad track.

The rear wheels and rubber tires gave way to steel disc railroad wheels. They retain “Buick” center caps, it would seem the Ma & Pa was proud of their rail going limo.

Contemporary reports indicate that the Buick was a very safe and stable railcar. The Buick’s hydraulic drum brakes were replaced with an air brake system. The brake shoes act directly on the wheels instead of expanding in drums as on a road car. Part of the brake mechanism can be seen between the wheels of the front truck. The steering wheel remains in place, but it serves to wind on the brakes manually if needed.

To aid traction, sanders were installed, they work by dumping sand on the rail to be crushed by the wheels. Cutouts in the front fenders that once housed side-mounted spare tires were repurposed as sand hoppers.

A pair of air horns supplement the factory electric units. An onboard compressor and reservoir tanks provided pressurized air. 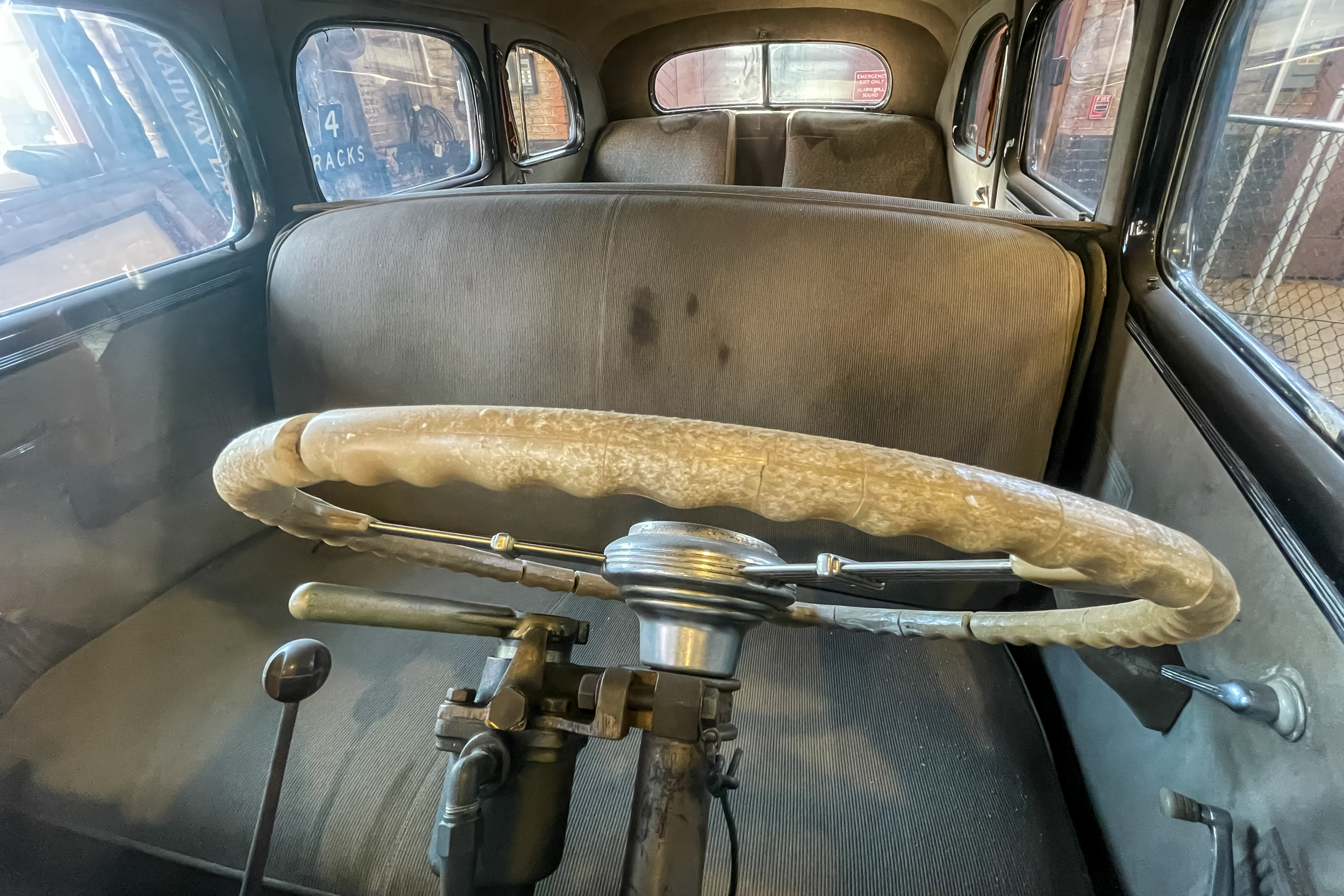 In road-going trim, the Roadmaster tipped the scales at just over two-tons. Doubtless, the conversion to railmobile added some considerable weight to that tally.

There was no need to modify the drivetrain. With about 120 hp on tap, Buick’s famous Fireball straight-8 was powerful by the standards of the 1930s. The 320-cubic-inch engine had overhead valves, or ‘Valve in Head’ to use Buick parlance. This arrangement gave better gas flow through the cylinder head. Most cars at the time employed a side valve, or ‘L Head’ design. The manual transmission has three forward gears and reverse, all selected with a floor-mounted shift lever. 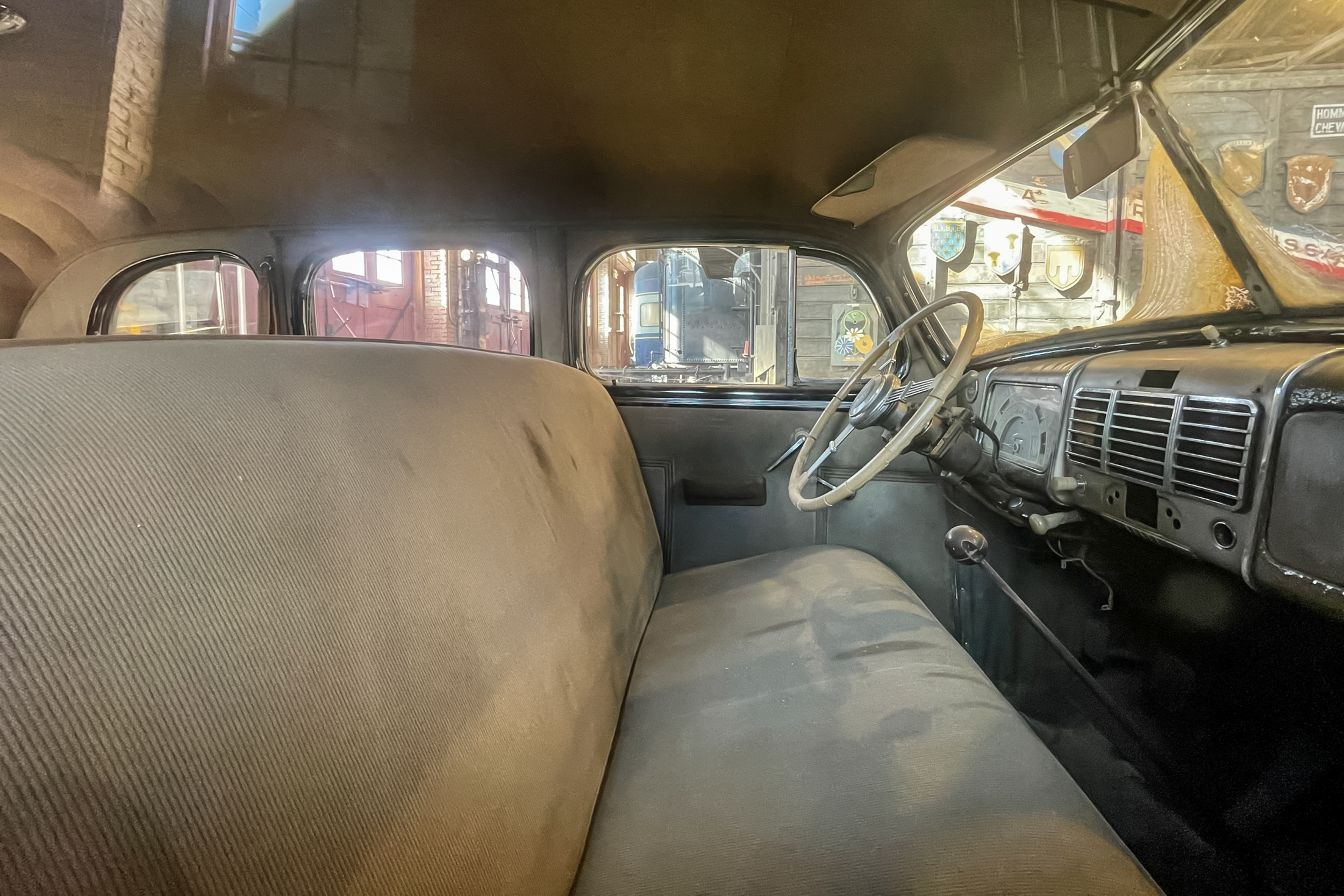 The Ma & Pa’s right of way bristled with potential problems, its 77-miles of track had 476 curves and 111 trestles. Disaster could literally be around any corner, out of sight for a train crew.

Track condition and maintenance was the purview of an official coincidentally titled “Roadmaster.” He would ride the line looking for problems like loose spikes, missing ties, missing bed plates, or a thousand other things that could endanger life, equipment, and revenue. Track inspection often took place in the early morning hours, and in all weather conditions.

To the railroad personnel who used it, the Buick must’ve seemed incredibly luxurious. The car was fully
enclosed with an all-steel Turret Top. Occupants of the spacious interior lounged on coil sprung, chair height seats, and had a heater to take the chill off, unlike the old Rickenbacker which was fitted with an open touring body. 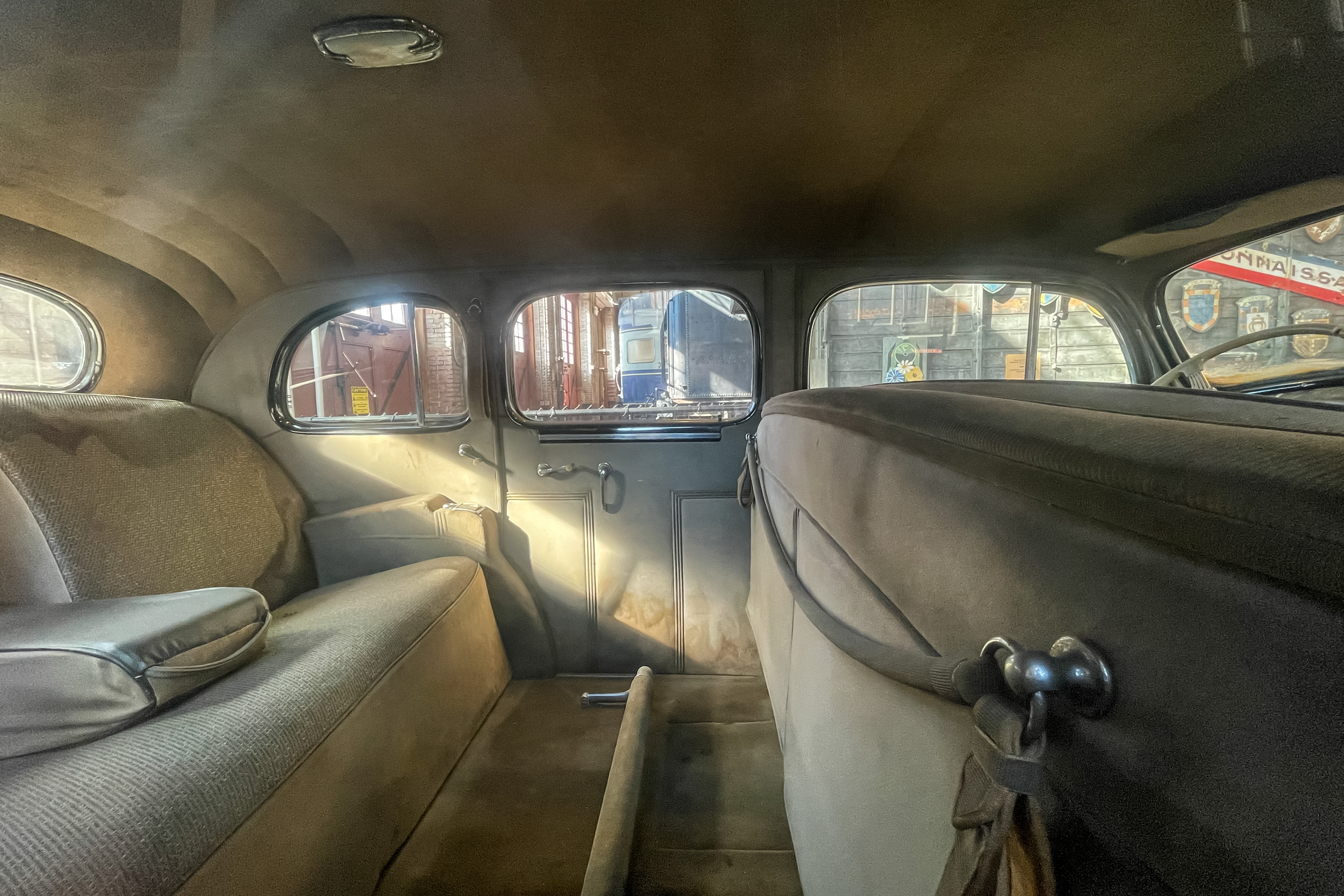 Ahead Of Its Time & Timeless

The Buick also served as a testbed for an early Bendix two-way radio system. It was so successful that the Ma & Pa became one of the first railroads in the country to equip their trains with radio communication.

Most railroads would’ve scrapped the Buick and replaced it with something more up-to-date, but the Ma & Pa had to mend and make do. They ran steam locomotives long after other roads dieselized, simply because they didn’t have the funds to update. Indeed, even the Rickenbacker was repurposed for trackside weed control. 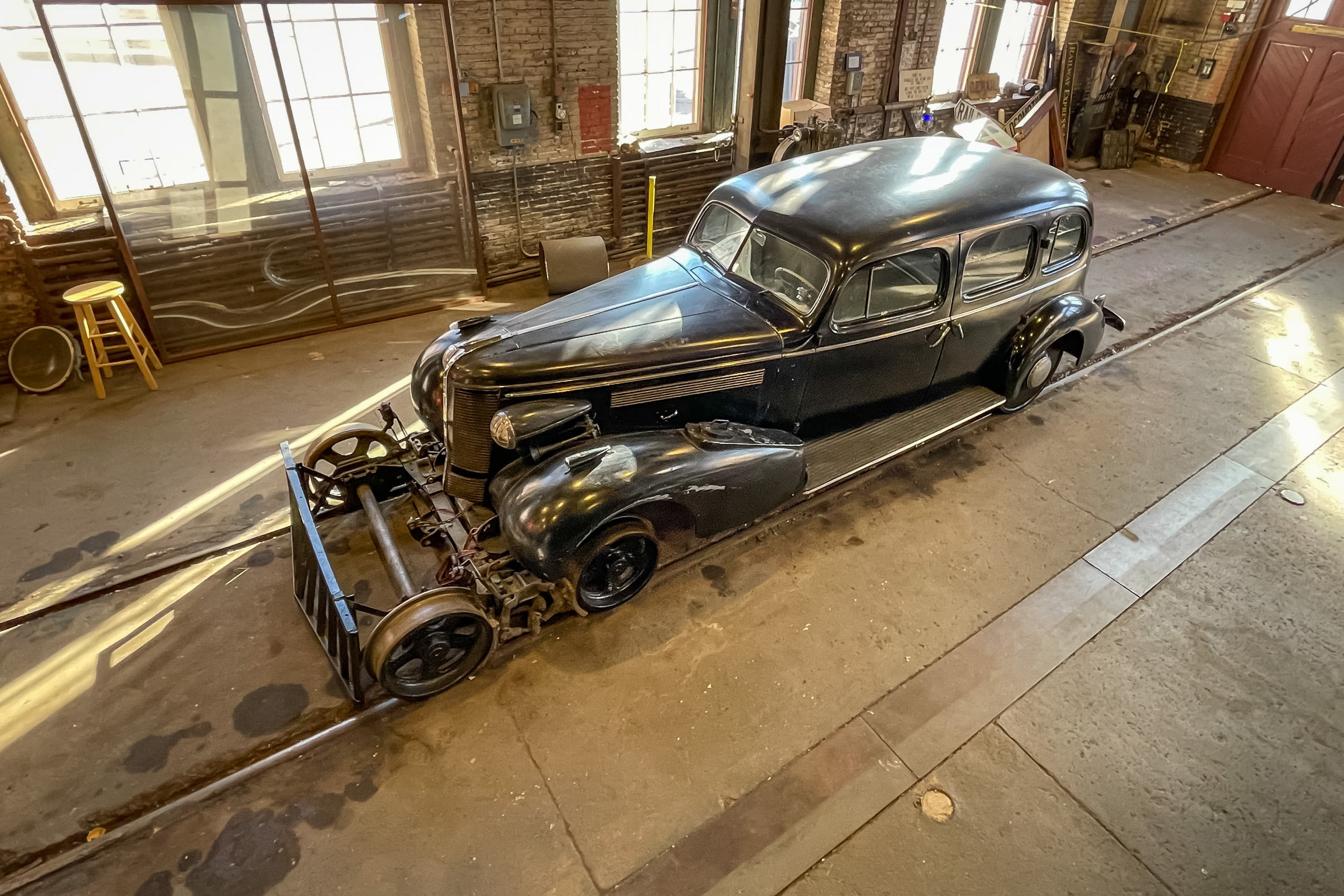 The Buick would remain in service with the railroad until 1977 when it was donated to the Baltimore & Ohio (B&O) Railroad Museum, where it remains today.

It’s easy to miss the Ma & Pa Buick railcar when you’re touring the museum. The architecture alone is distracting, to say nothing of the impressive collection of locomotives and rolling stock.

Today Ma & Pa 101 is tucked in the corner of a huge brick former railroad car shop, the place still smells faintly of hot oil and coal soot. Beams of light from graceful arched windows play on the Buick’s curves. It seems an insignificant thing next to huge steam locomotives.

But, the Roadmaster and railcars like it were indispensable to the railroads that operated them. If you find yourself at the B&O Museum make sure that you don’t overlook this curious survivor of one of the last great shortlines. Pause a moment and think of the ingenuity and craftsmanship it took to customize a motorcar to such a specialized purpose.

The Buick will probably never run again in deference to its historic integrity. But the Fireball 8 still turns freely, it would just take fuel, spark, and a little initiative to bring Ma & Pa 101 back to life.


10 of the Fastest and Most Powerful Mopar Cars of Their Time
What Most Soccer Moms Drive
33 Great Cars With Boxy Design That Would Look Cool Even Tod...
10 Best European Cars Not Available in the U.S.
7 Muscle Cars from AMC that You Never Knew You Wanted
Let Us Introduce Ken Block's New Audi Hoonitron

If it has an engine I'm probably interested in it, with the emphasis on the classic, special interest and overlooked. I tend to prefer cars with a boulevard ride to something that can lap the Nürburgring in record time. Chevette > Corvette, but Corvettes are ok too. I founded the Malasie Motors Facebook Group which today boasts nearly 10,000 highly engaged members.