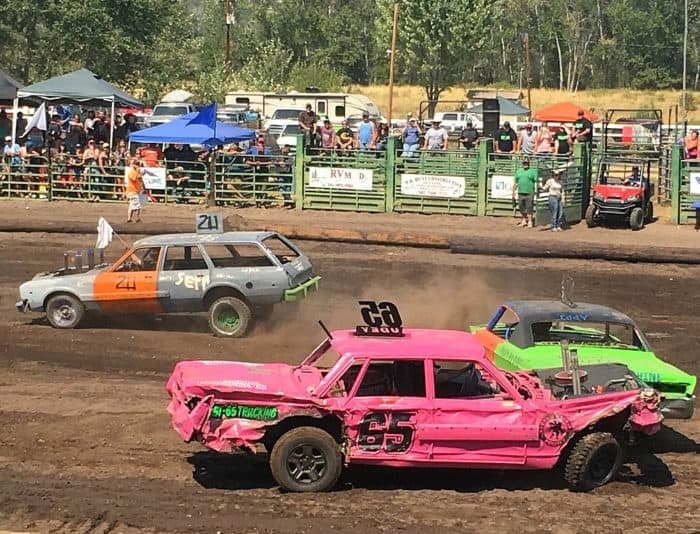 If you’re ready to check ‘demolition derby’ off your automotive bucket list, you’ll need to determine which vehicles make the best demolition derby cars. Is survivability about sheer size and weight, or does nimbleness also count? And how should you modify your chosen wreck for car-to-car combat?

Let’s dive into locating and prepping the best car for a demolition derby.

Just What Is Demolition Derby?

Demolition derby typically consists of five or more drivers competing by deliberately ramming their vehicles into one another. The winner is the last driver whose ride remains operational. To slow the cars -and add to the crowd-pleasing chaos- the dirt tracks and fields where demo derbies happen are usually soaked with water beforehand. Mud always makes things interesting!

The origins of demolition derby are cloudy, but certainly by the 1960s their popularity in the U.S. was surging. They became a staple of county fairs, and spread overseas. The peak of demolition derby popularity was in the 1970s. Since then, TV exposure has waned and crowds have thinned, though these can still number in the thousands (besides when we’re all dealing with a global pandemic of course).

Yet, there are still plenty of demo derbies to enjoy – or to enter! To find a demolition derby near me, I check the websites of top event producers JM Productions, Tour of Destruction, and USA Demolition Derby. 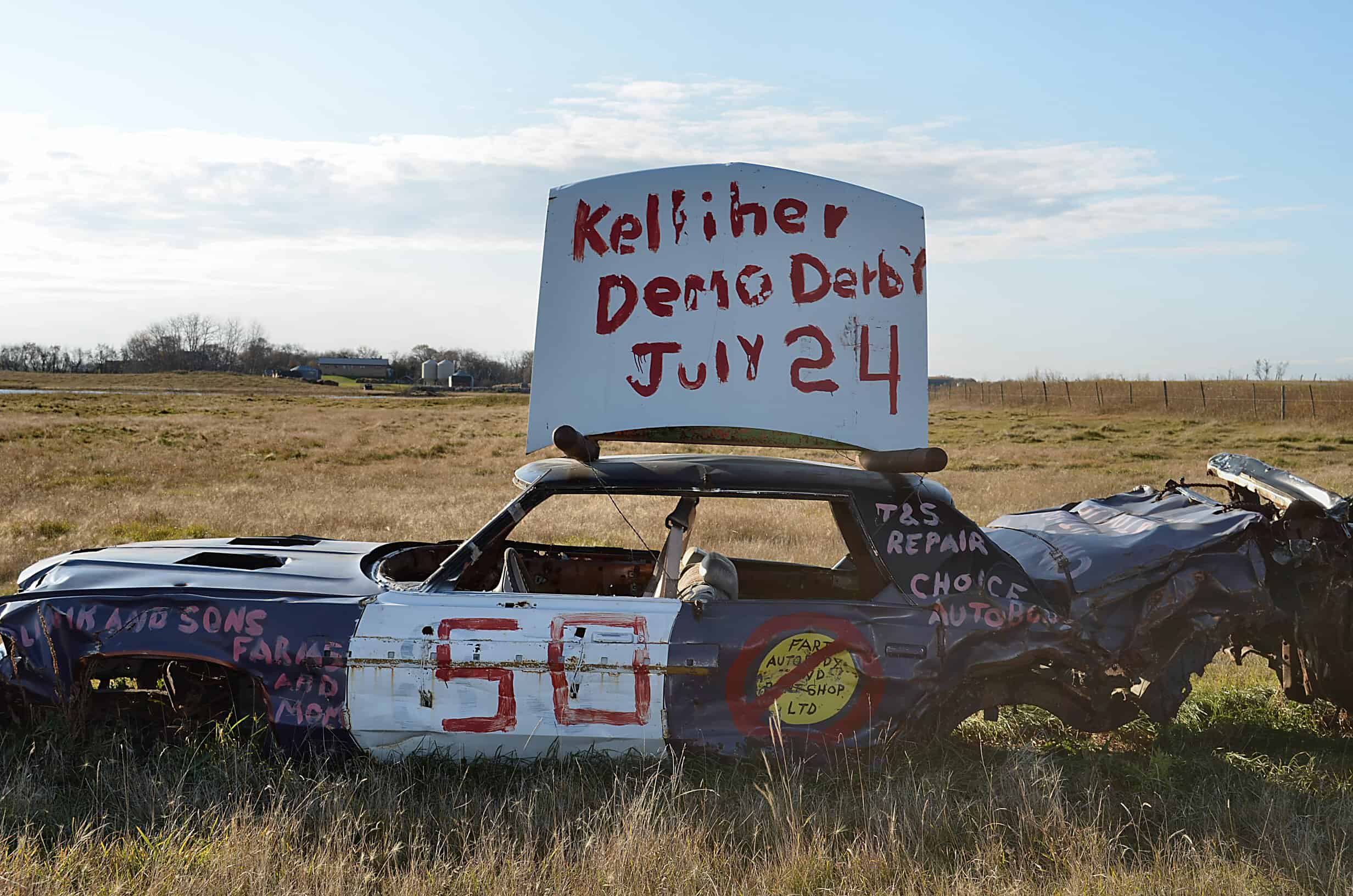 Just showing up at a demo derby in that hand-me-down beater that’s cluttering your driveway isn’t going to cut it. Despite the apparent anarchy out on the field, demo derby is in fact governed by quite a list of rules (which vary depending on the event, venue, and promoter). These are intended to ensure both the safety of participating drivers and the entertainment of audiences.

While searching for a demolition derby car, your criteria should be something that still runs, but is cheap to purchase (preferably no more than $500), and likely to survive multiple collisions. A vehicle that has repeatedly failed emissions tests (and isn’t worth repairing to pass), but is otherwise running strong, is ideal.

Word of mouth is always worth a try. It’s surprising how many friends and relatives have a retired vehicle they’d be glad to be rid of. Failing that, auto wreckers and Craigslist are excellent sources for last-gasp vehicles. Used car lots may have clunkers they’ve taken in on trade as well. You can even (diplomatically) approach the owners of candidate cars you notice rotting away in fields or on driveways. 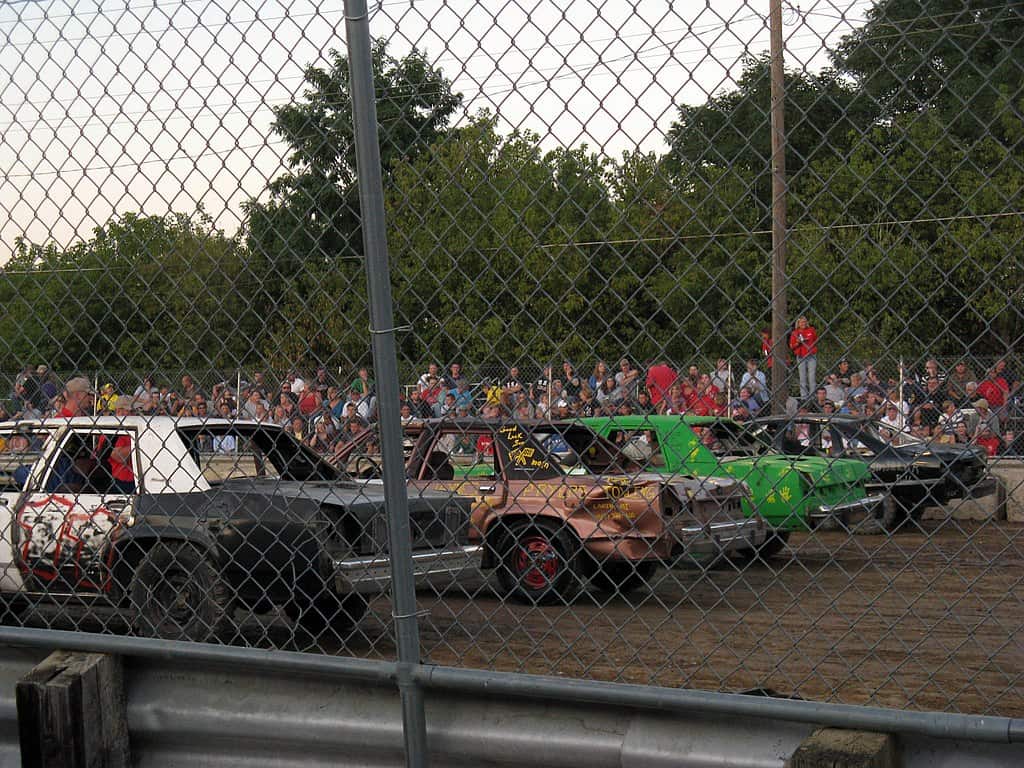 Traditional full-sized American-made sedans and station wagons from the ’60s and ‘70s were long the norm in demo derbies. These rear-wheel-drive behemoths were prized for being larger, heavier, and more robust than newer vehicles. Front-wheel-drive, more nimble sedans from the ’80s and ’90s are finding their place amongst the derby fans, however.

With body-on-frame construction and massive overhangs protecting vital components, the big American ‘granny cars’ can withstand absurd levels of damage and just keep on rolling. And bigger is always better, as more mass means more damage to other vehicles upon impact.

The Ford LTD and Crown Victoria were ubiquitous derby entrants at one time, as were Chevrolet Impalas and Caprices (including wagons). The 1964-1966 Chrysler Imperial turned out to be so crashworthy that, to this day, it’s banned from most derbies for offering an unfair advantage. 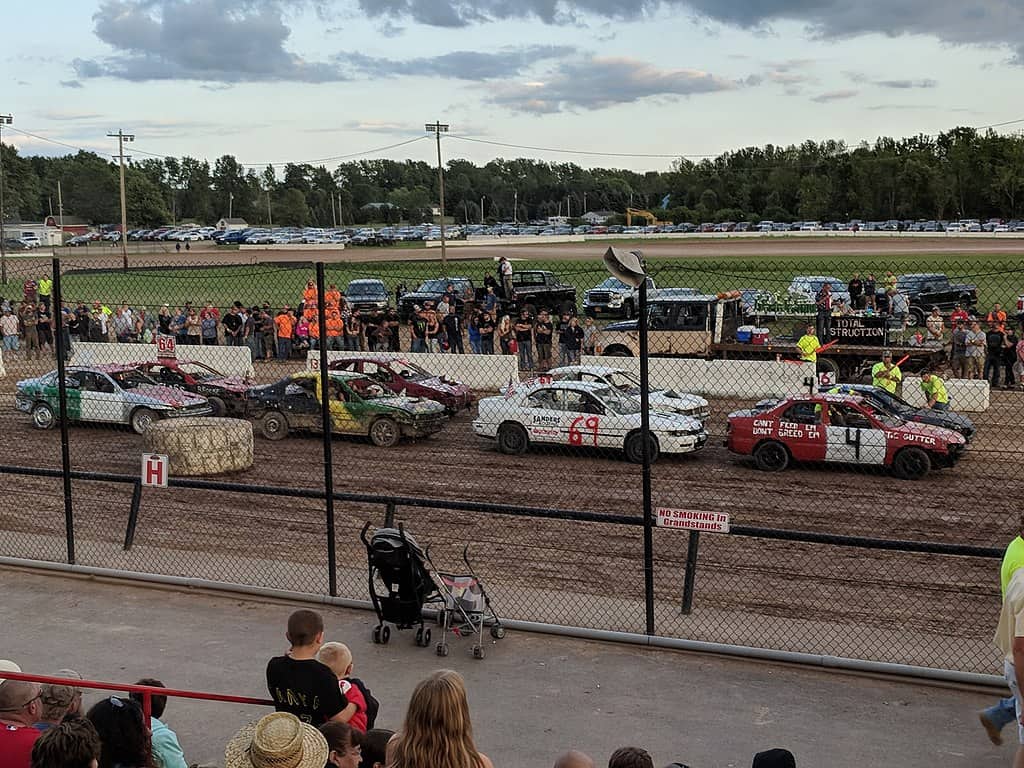 A separate class of events for compact cars has grown in popularity due to their abundant supply and attractive mobility on the field. The first-generation (1981-1990) Ford Escort/Mercury Lynx is deceptively tough, entertainingly agile, and easy to find for under $500. (Because of the typically muddy derby fields, which limit traction, engine size isn’t a major factor.)

Front-wheel drive cars have the added advantage of being able to sustain considerable back-end damage without being immobilized. For this reason, FWD derby drivers will often try to ram their opponents in reverse, which only adds to the bizarre spectacle. 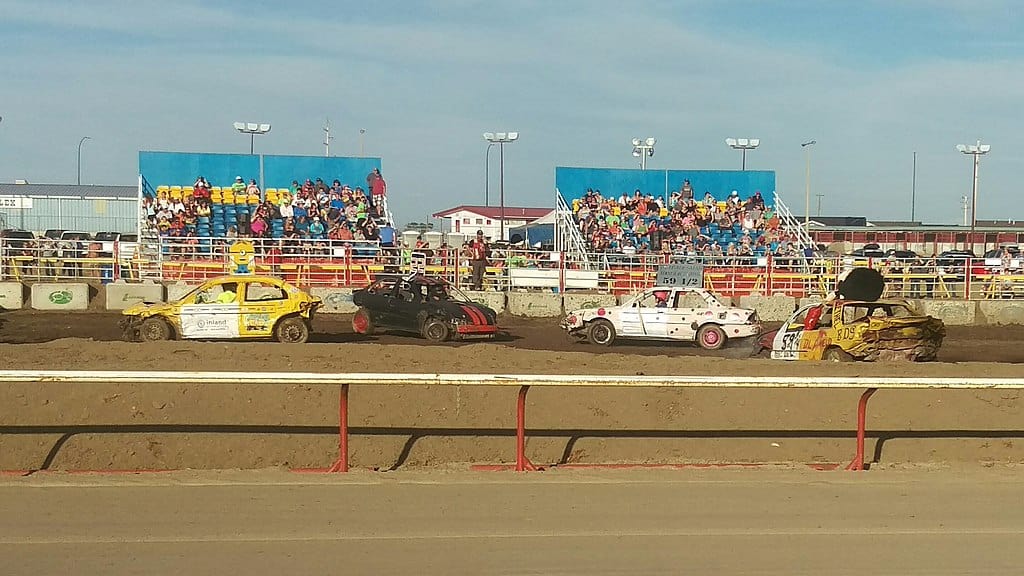 The biggest challenge for most wannabe demo derby drivers is prepping their donor car to meet safety regulations and boost its chances of survival during the contest. This is where some mechanical know-how and some basic tools are a must, and enlisting suitably experienced friends (who can also serve as your pit crew on event day) may be vital.

Derbies require all glass to be removed from cars, for safety. Rear seats must also be removed. Doors and trunk should be welded or wired shut. A driver seat belt and an approved safety helmet are also required.

Most derbies require the removal, or at least relocation, of the car’s gas tank. The original tank may be replaced with an approved metal gas tank/fuel cell or plastic marine tank, situated where the rear seat used to be. The tank must be mounted in front of the rear axle, but not directly behind the driver’s seat.

You’ll usually have to relocate the battery to the front passenger footwell. Strap it down securely and cover it well. Rubber from an old mud flap or tractor tire inner tube are ideal coverings.

Roll-over bars and safety cages are usually also required. Radiators are typically relocated to the rear seat space, or even removed altogether. Most engines can survive without for the duration of a typical derby heat. However, the latter approach is contentious within the derby community.

Intentional hits to opponents’ driver’s door are grounds for disqualification in demolition derbies. So driver’s doors must be painted in a contrasting color, for visibility. But such hits do happen, so it’s wise to reinforce your driver’s door with steel plate or pipe.

Some events additionally require the driver’s half of the windshield space and the driver’s door window to be covered with steel mesh. Wrapping window pillars in multiple layers of duct tape is also a popular, low-cost safety measure.

You should strip out all but the absolutely essential wiring from the vehicle. Once your car starts getting smashed, pinched or severed wires can end your contest embarrassingly early. So just run a wire to the starter; one to the coil; and a couple to the alternator.

Seek out used all-season tires, for the muddy conditions, with at least one-third tread-depth remaining.

On newer cars, remove the plastic bumpers. They provide no additional strength and are just one more thing to get snagged on other vehicles.

If your goal is to enter a demo derby just for the experience, you can stop there. But if you’re seriously setting out to win the thing, further mods are recommended. These could constitute a whole separate article, but include cutting away fenders (if rules allow) to minimize interference with tires, and removing shifter linkage from automatic transmissions (which will likely fall apart after a few impacts). 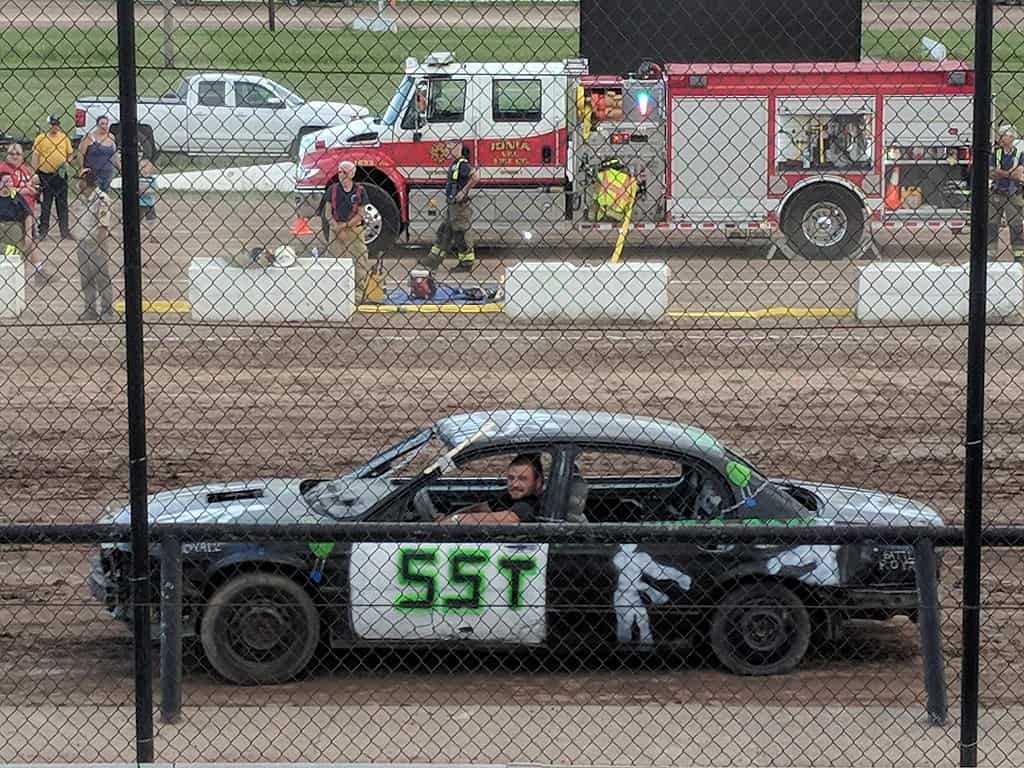 Once all the above is done, it’s time to let rip with a rattle can on the exterior of your demo derby car. Driver’s doors aside, this might be pure decoration and/or may include the driver’s name, names of sponsors (local businesses which have helped out with the cost of the build and entry), related websites, slogans etc.

Traditionally, demolition derby cars have been painted in loud, garish colors and designs. But this is one area where you can get creative and have some fun. Such freedom of expression is one of the allures of demo derby.

With all of the above in mind, do you still want to enter a demolition derby? And what would be your further tips for finding and prepping a car for derby combat?