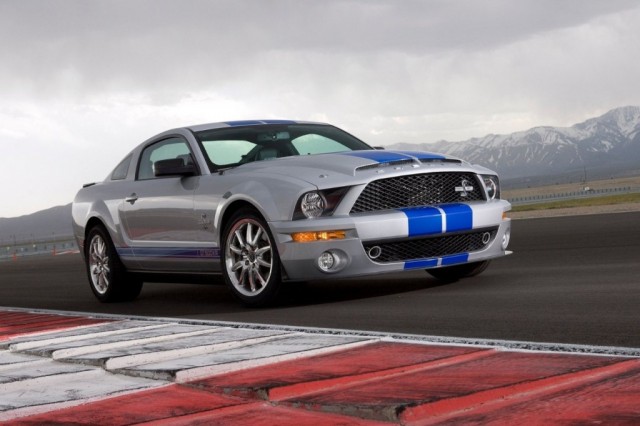 The first thing that comes to most people’s minds when they think about the history of Ford is the good old Model T. And rightly so, after all isn’t that the original ride that gave America its first wheeled experience? Ford Model T is a name to contend with. It is the forbearer of today’s auto assembly lines, not to mention it was the sole product Ford sold for over 19 years. Yeah, for 19 years the company made exactly 1.5 million Model Ts. What many may not know is that prior to the launch of the Model T there existed another Ford named 999, which was basically a racing car that the distinguished Henry Ford built and went on to set a ground speed record in it; an unbelievable 91.37 mph. That was not a small feat by 1904 standards. 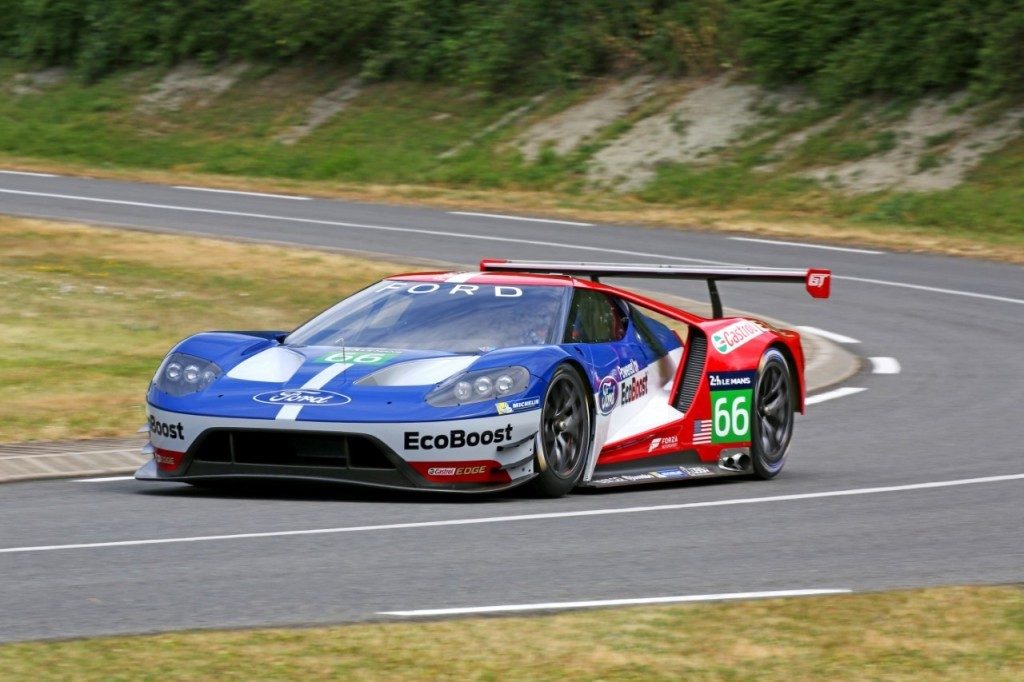 Ford’s history is without a doubt unmatched by any auto maker in world. It is a rich chronicle of incomparable performances and ingenuities. It is no wonder that Ford has all along remained in the forefront of innovation and emerging technology. Not even die-hard skeptics can doubt Ford’s performance, especially in the face of the company’s latest F-150 technology.

What many will agree is the indisputable fact that Ford is a global leader in the SUV and pickup market.

Did you know that 90% of the company’s profits come from truck sales?

Now you know. Ford has in recent decades ventured into high performance cars too. In its 15 years of production, the Mustang has had more variations and facelifts than the average Californian plastic surgeon has recreated faces. Ford has also had a successful stint at the races too, albeit for a brief decade. Who doesn’t remember Carroll Shelby? Ford’s interest in the high performance field may have waned since the 70s, but its rich performance heritage is none to be ignored. If this be the case, then, you may ask, what are the fastest Ford cars of all time?

We have done some little digging on the company’s century of excellence in the auto industry and compiled a list of its fastest cars so far in terms of mileage per hour. The information we used is derived from third party sources since Ford does not offer their own testing information. A few third-party tuned models such as race cars have been excluded from the list, in all fairness.

So without much ado, here is our list of the top 15 fastest Fords. 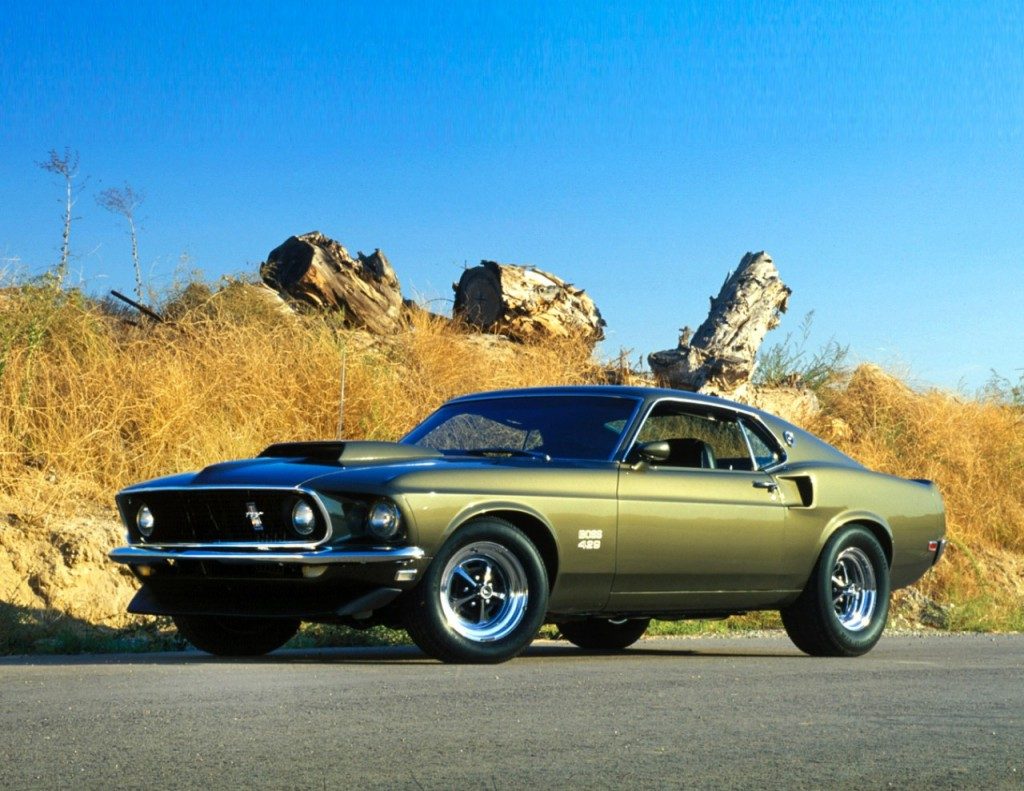 The 1969 Boss 429 ranks higher than many Mustangs in the Ford Performance category. The Boss had a V8 engine with an output of just 375 hp. In actual sense the 429 cubic inch engine could put out over 500 hp and 450 lb-ft of torque when put to task. It cost as much as $4,925, which was almost twice as much as you would pay for an inline 6 base model. Many Bosses were built back then, and some of them fetch as much as $500,000 in auto auctions. Talking of speed, the Boss 429 could do a 0 to 60 mph in 5.1 seconds, which was quite impressive back then. 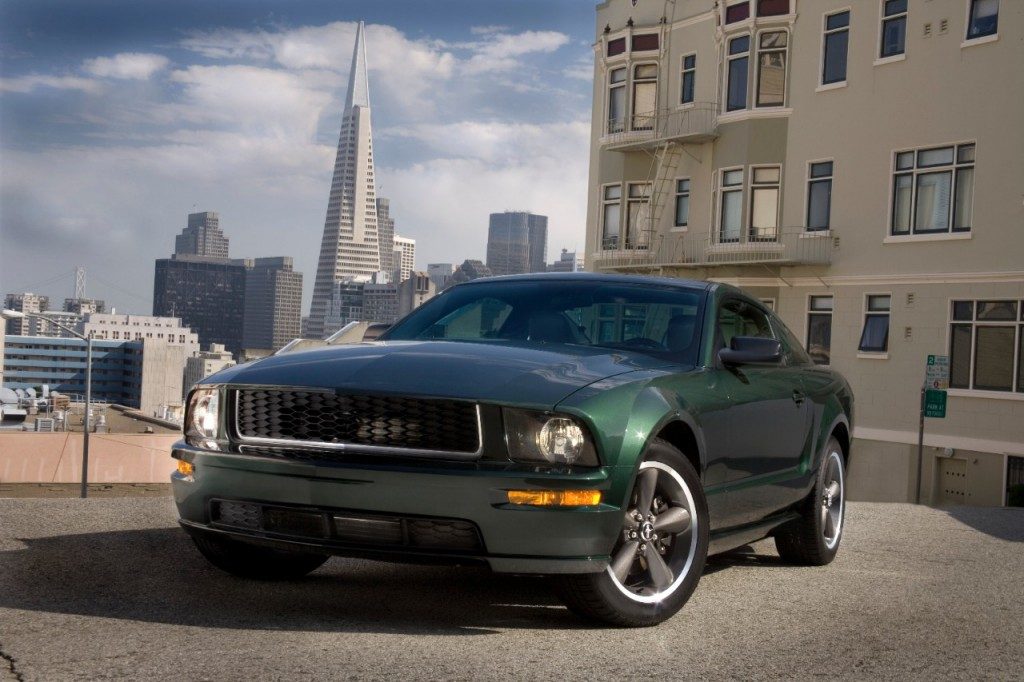 Steve McQueen’s famous movie car was introduced to the 21st century scene in 2008 after Ford launched the Mustang Bullit on the 40th anniversary of the greatest movie car chase in history. The Bullit was more than a new grille and paint job. It featured a base model GT and a new engine management system. Its improved air intake, enhancements in exhaust, and heavier crank damper gave it an extra 250 rpms, effectively reducing its 0 to 60 mph from 5.2 seconds to 5 seconds. 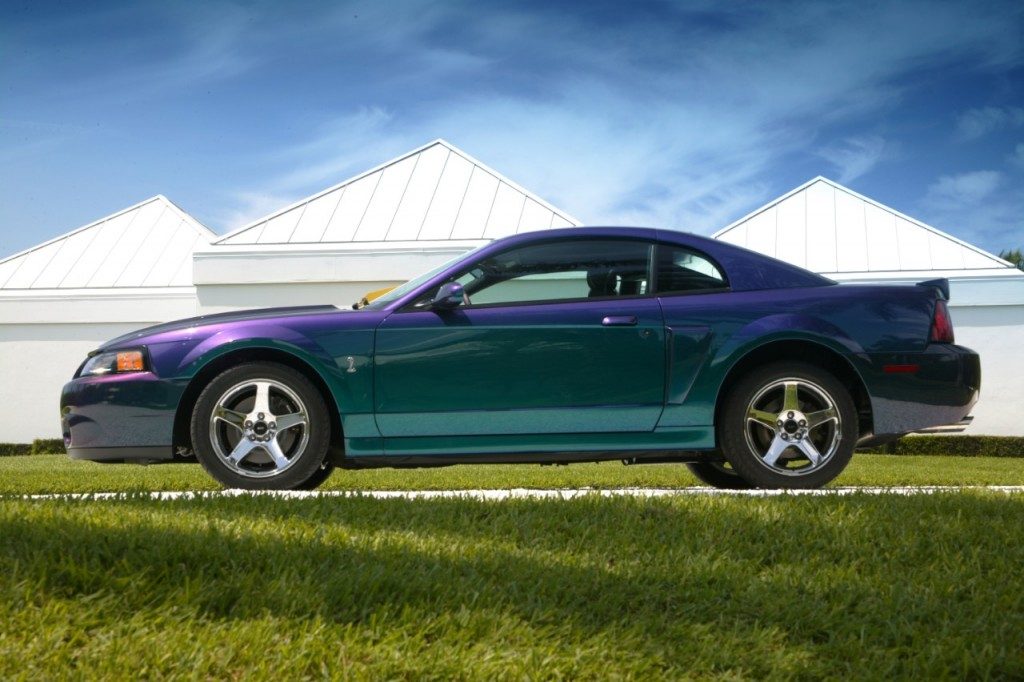 At the beginning of 2000s the Mustang was being viewed as an almost outdated car, but Ford was still determined to keep it relevant. In 2003 the company launched the SVT Cobra, fondly known by the SVT crew as “The Terminator.” The Cobra was supercharged by a 4.6 liter engine and had an output of 390 hp. It could also do 0 to 60 in 4.8 seconds flat. 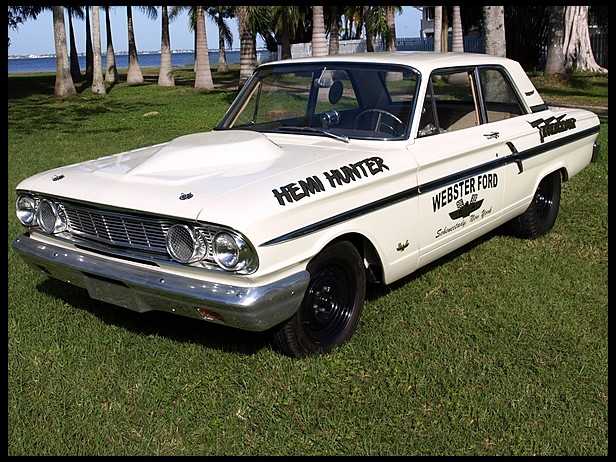 The history of the Mustang is well known since its introduction in 1964. What is not common knowledge is the only Fairlane Thunderbolt launched in the same year. This was a fast car with a V8 engine that gave close to 600 hp and was lighter than the stock Fairlane. The sports coupe could do 0 to 60 mph in 4.7 seconds. There were only 100 of these Thunderbolts produced which makes them worth quite a lot today. One was sold in 2012 at Mecum Auctions for close to $200,000. 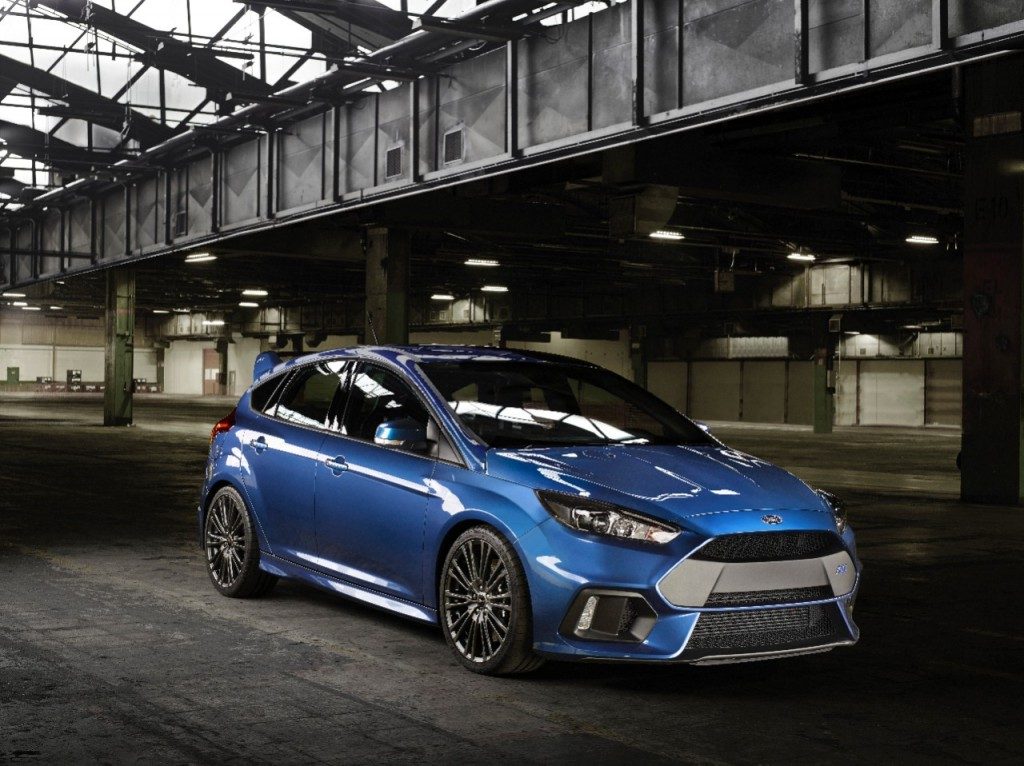 The Thunderbolts record of 4.7 seconds 0 to 60 time still lives on. It’s only matched by the Focus RS which is still to hit your nearest dealership yet. Word has it that the RS comes with an engine capable of 354 hp, 325 lb-ft torque, and a top speed of 165 mph. Another big plus is that it can carry five people and still leave room for groceries and everything else in an ample trunk. It is expected to cost $36,605. 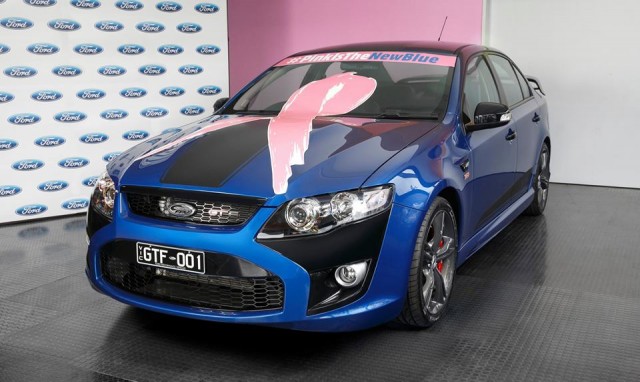 If you watched Mad Max (who didn’t anyway?) you’ll remember the Interceptor. The 2014 Falcon GT F is closely related to the Interceptor, well at least the general idea. If you think of horsepower, the only country that compares to the US, or rather comes close, is Australia and this car is a perfect testimony to their unrestricted obsession with horsepower. The sedan is driven by a Mustang GT 5.0 liter V8 engine with 470 hp output and can easily do 0 to 60 in 4.5 seconds. The Falcon is expected to roll out of assemble lines in Australia, but you’ll have to wait much longer to drive one in US, most probably until the year 2039 when you can legally import one. 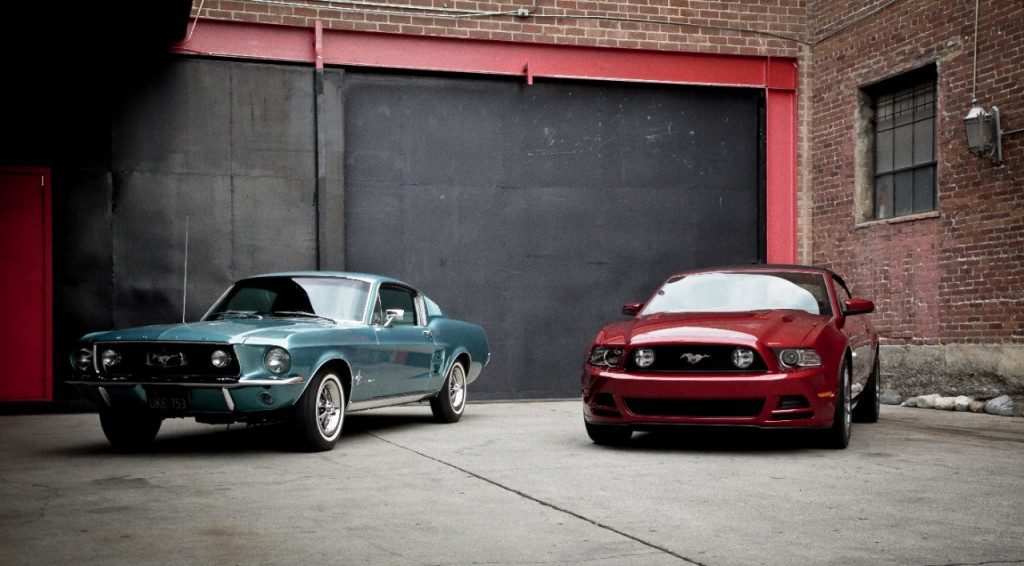 Most people associate the Mustang with ancient history, at least in automobile years. The current Mustang GT however should serve as a wakeup call to them. This is a Mustang that despite having retained the same old retro style of the last generation, including a rear-axle setup that was popular in the 60s, is still one great car to take for a spin. It has a 5.0 liter V8 engine capable of 420 hp and 390 lb-ft torque. The latest model weighs around 3,650 and easily hoists itself from 0 to 60 in 4.5 seconds. 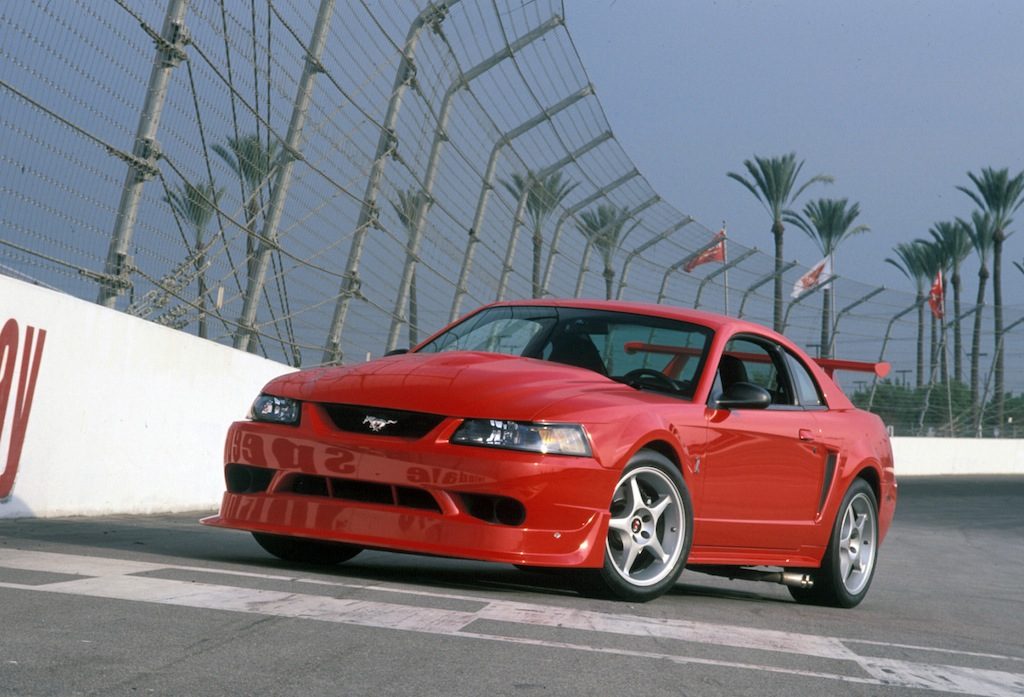 Any “R” written on a Ford Model translates to good times. That’s what you get in a SVT Mustang Cobra R. The car’s 5.4 liter V8 engine has an output of 385 hp and 398 lb-ft of torque. What’s more, it can achieve 0 to 60 in 4.4 seconds with ease. A top speed of 175 miles per hour makes it the fastest Mustang in the label’s 36 years long history. The Cobra R is a brainchild of Jack Rousch, a long time tuner with Ford. So far only 300 have been made, which tells you what a rare Ford this one is. 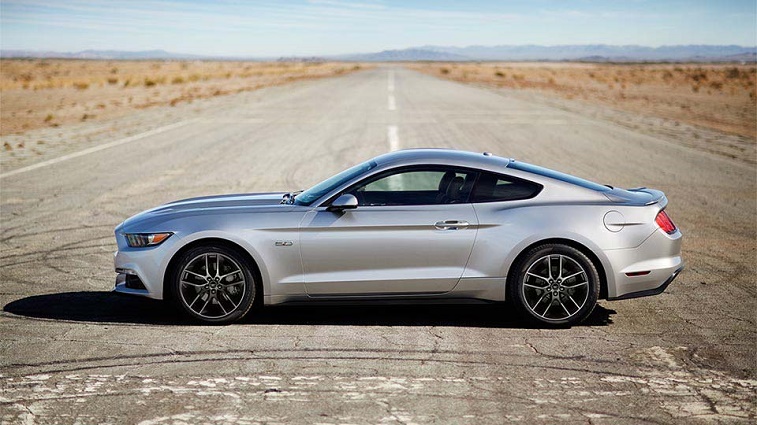 The 2010 and 2014 Mustang GTs were quite impressive and so was the Cobra R, but the ’15 GT is a whole new story. Finally, here is a Mustang GT with a fully independent suspension and what can only be described as evolutionary design. It is a break from yesteryear’s pure retro to today’s well rounded design. Performance-wise, the 2015 GT gives value for your dollar. It rides on a 5.0 liter V8 engine with a capacity of 435 hp and 400 lb-ft of torque. It has a top speed of 164 mph and will give 0 to 60 in an impressive 4.4 seconds.

43 years after the last Mustang Boss, Ford decided to bring the trusted model back to the road. The Boss 302 was launched in 2012 and still retained the iconic C stripe style of the 1969 model, as well as the deep V8 rumble. Its 5.0 liter V8 engine gave 444 hp and 380 lb-ft of torque. What was most impressive about the Boss 302 is the fact that it could scramble 0-60 in 4.2 seconds. It could even maneuver a corner in top speed with ease. The 21st century may have a design based on a classic but talking of performance, it is actually a Ford to contend with. 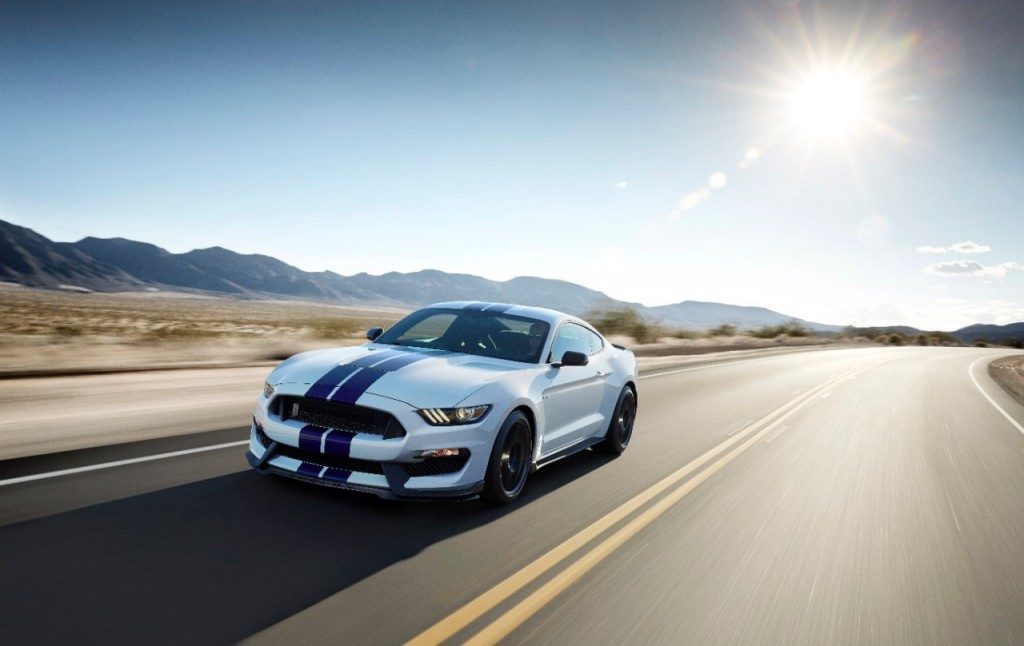 The best comparison you can give to a Shelby GT 350 is a laser-guided missile. Bringing a Shelby to a race is like entering a gunfight with a bazooka. The car’s 5.2 liter V8 engine has an output of 526 hp and 429 lb-ft of torque. It does 0 to 60 in 3.8 seconds and has a top speed of over 170. The GT 350 has a price tag of $48,695 but has an equal performance with cars that cost over three times more. It is an American hero, a fact no one should dispute. 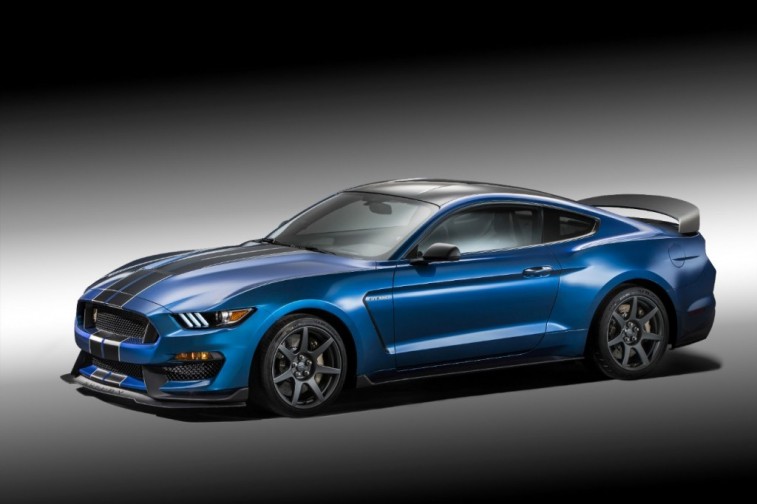 Here comes the “R” in Ford again, a sign of good times. If you thought the GT 350 was a bit too “civilized”, then the R is all you need. This is a Spartan model without air conditioning, radio, and even a back seat. Rather than have these comfy extras, the car comes with carbon fiber wheels, an aero kit, and a track-designed suspension system. It retains the same power output as the GT 350 but its 0-60 sprint is accomplished in just 3.7 seconds; 0.1 seconds faster than the GT 350. This machine however has a price tag of $64,000, which says something about its performance.

In dinosaur terms, if the GT 350 was a Velociraptor, then the GT 500 was a raging mad Tyrannosaurus Rex. The GT 500 takes to the muscle cars of the 60s without much in corners but the 660 hp machine is guaranteed to leave the competition choking in dust. It comes with a price tag of $55,000, which is quite a bargain considering its performance. It easily puts Porsches and Corvettes to shame with a top speed of 202 mph. It is a flawless car, but we expect Ford to come up with a next generation GT 500 in 2017. Word is that Ford will be targeting the Dodge Hellcat in terms of horsepower and performance. 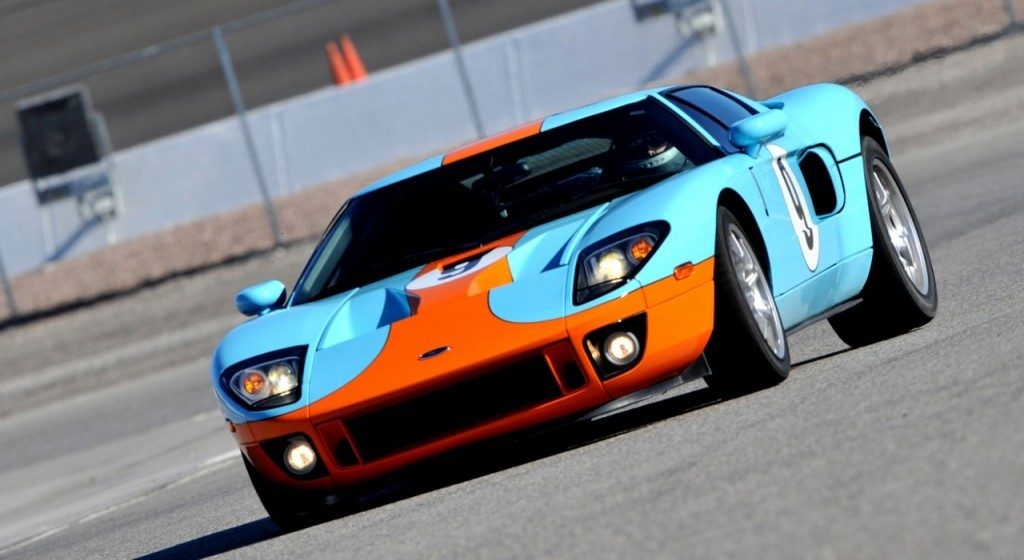 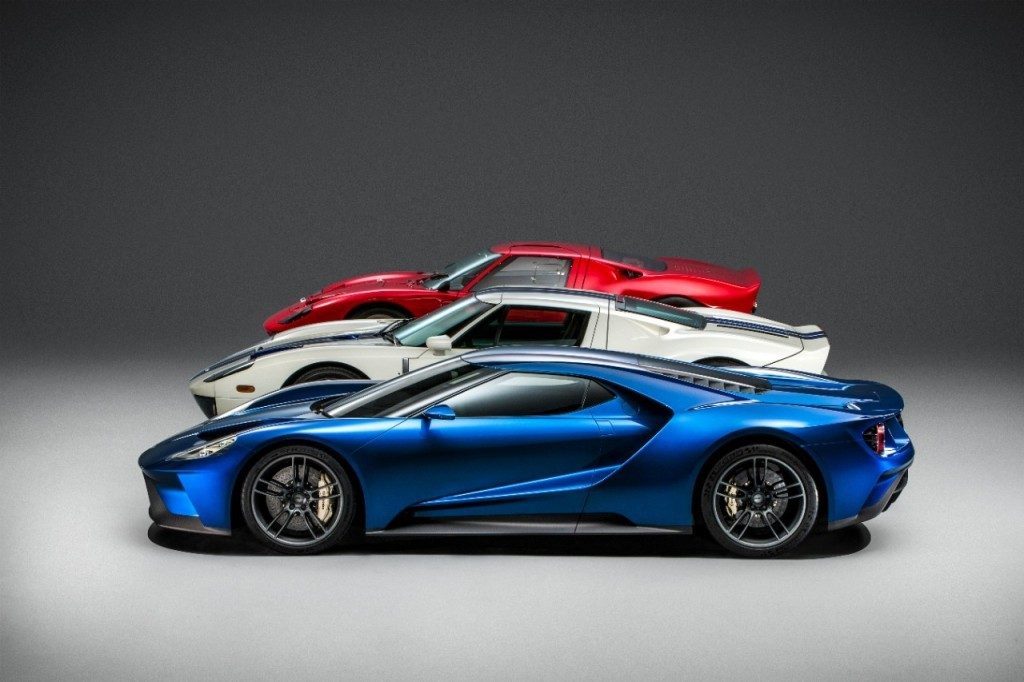 The last decade’s Ford GT was a retro supercar designed after its 60s racing predecessor. The 2016 GT is a whole new story. It is a car designed with one thing in mind, to recreate Ford’s success with the Le Mans fifty years later. It breaks all the traditional rules with a mid-placed 3.5 liter twin turbo V6 engine, giving over 600 hp and 500 lb-ft of torque. It speed stats are yet to be released, but word has it that it can accomplish 0 to 60 in 3.2 seconds. Its top speed is on the higher side of 200 miles per hour. All facts considered, the 2016 Ford GT could be the fastest Ford model of all times.