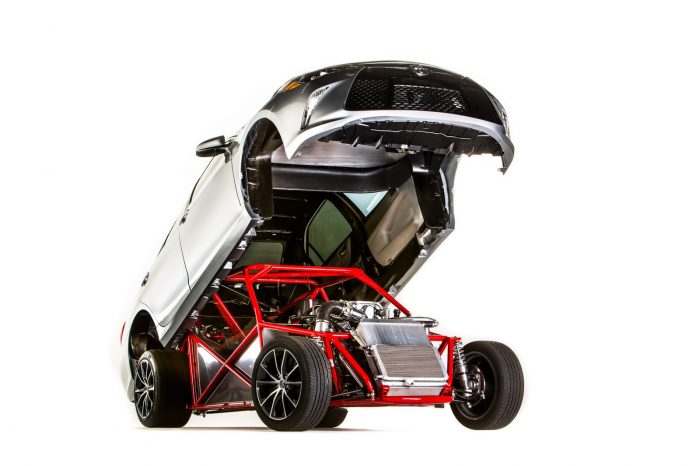 Since the first SEMA show started, no award has ever been given for the best sleeper car on display, but surely if it does, the 2015 Toyota Camry Sleeper would definitely get that award easily. A car is considered a sleeper when beneath the unassuming looks that are often stock looking vehicles, a lot of monstrous power and speed is hidden. This basically is what Toyota unveiled at the recent 2014 SEMA Show that was held in Las Vegas. The SEMA show normally displays lots of outrageous, high-performance, and flashy automobiles. So finding a very stock looking silver Toyota Camry that only wears a smoky tint and a set of custom wheels, may be a bit confusing. 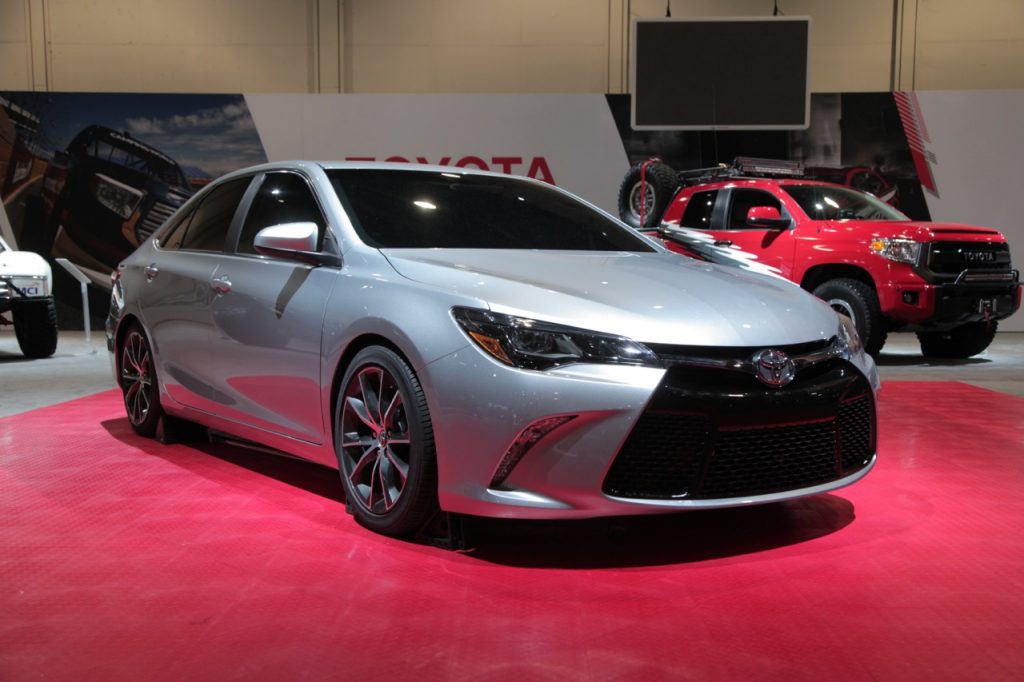 Don’t Judge a Book by Its Cover

A handful of automotive journalists was given a sneak peek by Toyota weeks before its official debut. The sneak peak occurred at Toyota Racing’s warehouse that is located in Torrance, California near the Toyota Museum. When Toyota personnel pulled on the sheet, it revealed a normal and stock looking 2015 Toyota Camry (SXE sport trim). The only noticeable upgrade is its tinted windows, and in fact the Camry that was revealed seems to be just been rolled out of the production line. When a Toyota rep asked what they think, all he got was few awkward minutes of silence and confused glances. Adding to the confusion, Toyota personnel cordoned the Camry to make sure that all are away about 10 to 15 feet, everyone was confused at first why is this needed, until when the engine was fired up. 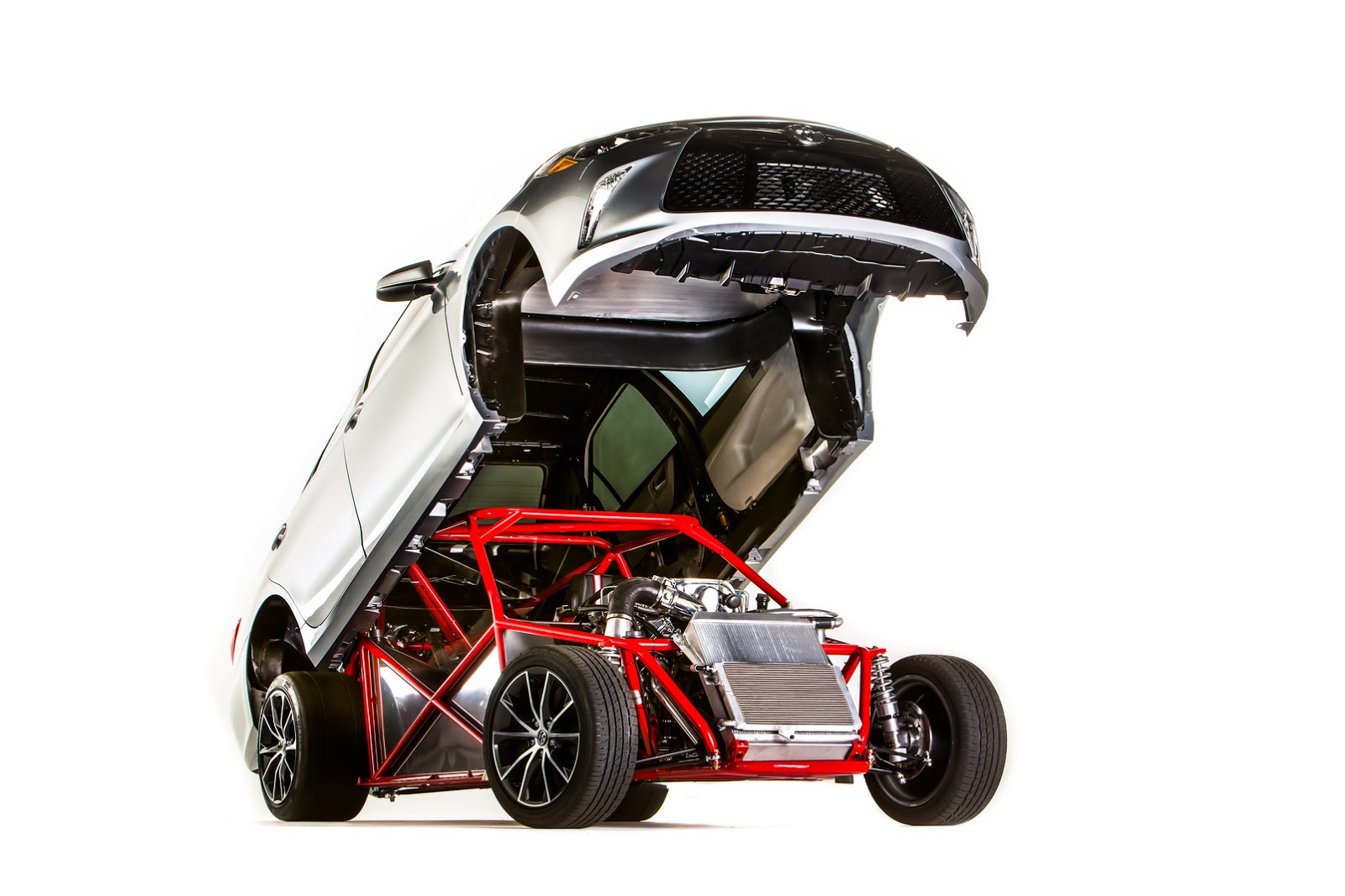 The Deep Secret Inside

The engine sound of this sleeper shook the whole warehouse, suddenly, the confused look of the crowd in the warehouse change to raise eyebrows and surprised looks. The sleeper Camry revved up and roared loudly similar to a drag car. This is the time the crowd realized that it is really a mean sleeper car. The crowds’ jaw almost hit the ground when the Camry’s body-shell was lifted like a funny drag car, and revealed a custom tubed chassis and also the monstrous power plant. The stock look of the Camry swiftly faded upon seeing the supercharged, Nitro-equipped V8 engine that puts out 850 horses. This is certainly a Camry not to be taken lightly, especially in the drag strip. 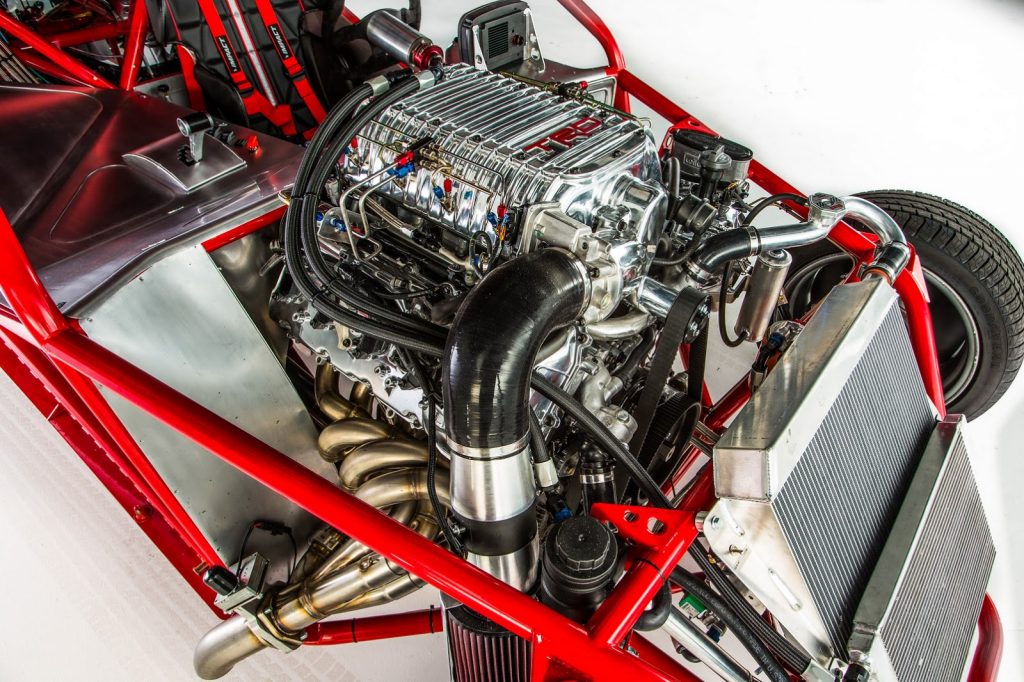 The monstrous engine was taken from the powerful Toyota Tundra, it is a V8 (5.7-liter) engine with upgraded connecting rods and forged pistons. The Tundra’s rear axle and transmission were also pulled to perfectly distribute and handle the V8’s unbelievable power. The sleeper car is riding on wide drag racing tires that are 335 in width that significantly helps in putting more power on the ground. To even achieve more power, Toyota fitted the vehicle with a wet nitrous system and also a TRD supercharger. Conservatively, the Toyota personnel reckon that this particular Camry can achieve a 9.8 seconds or even faster quarter-mile time. 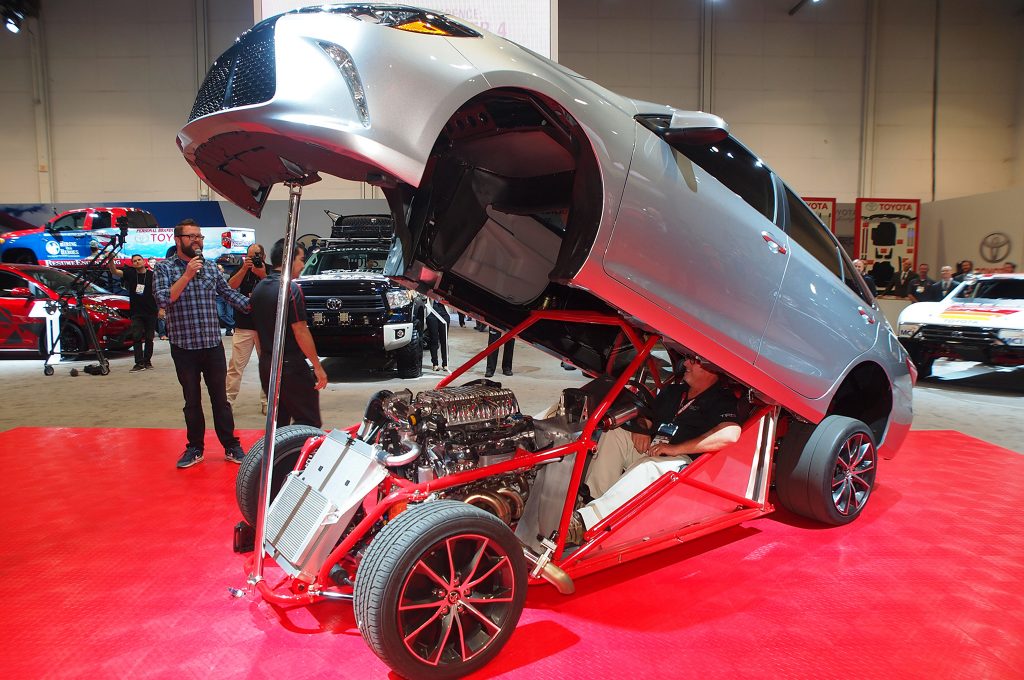 Toyota Racing officials stated that they eager to try the 2015 Camry Sleeper on the track, hopefully in in Pomona, California on the drag race series by the NHRA. So other racers of the event should be warned when a silver-stock looking Camry is on the starting line. The total build only took 11 weeks, which focused on hiding the car’s aggressive character under a very timid look. The lowered suspension ride height added with wide and beefy rear tires may not be too intimidating, but this particular family sedan is actually has 143 horsepower more than a 707 horsepower Dodge Hellcat. 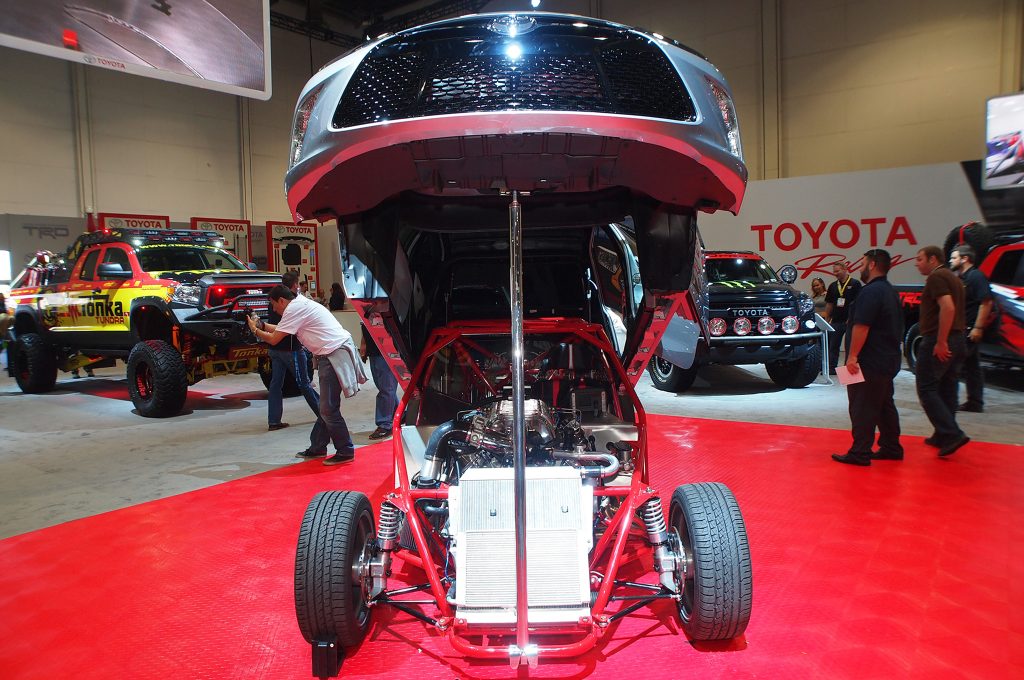 The Toyota Racing team takes pride in all their efforts in all the focus to every detail they did that produced a one-seat car, with four-functioning doors, and working exterior lights. The sleeper Camry’s front tires are basically stock, but the rear wheels’ walls were shaven in trying to conceal the actual drag-slick identity of the tires. In the trunk, four canisters are used to hold the nitrous, and air rams that controls the Camry’s body shell. Toyota Racing worked side by side with NHRA personnel to further ensure the drag racing Camry meet all safety and technology requirements in making it a proper and legitimate race car for the drag strip. 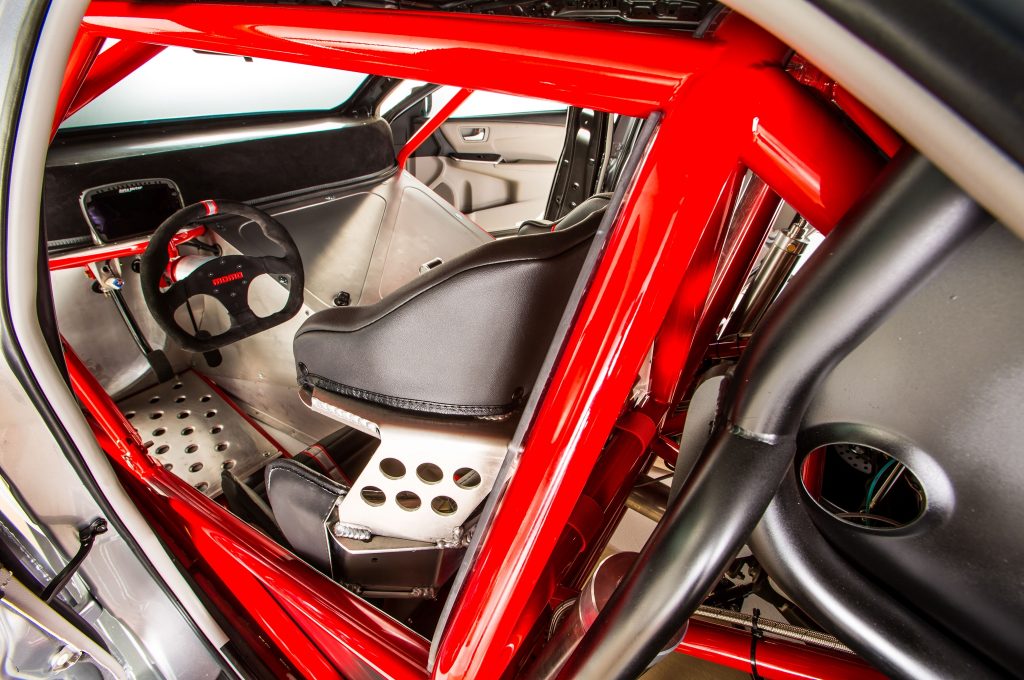 The stock exterior and functional doors may look stock, but entering through these doors will be quite difficult for the driver and impossible for passengers: The custom-fabricated, tube-framed, race-spec interior did not leave any space for passengers. Aside from the door panels, interior cabin is all race spec, with a digital dash (Autometer), racing seat (Fast Ed), and also a four-point harness (Impact Racing) to help the driver to be able to tame this Camry beast. 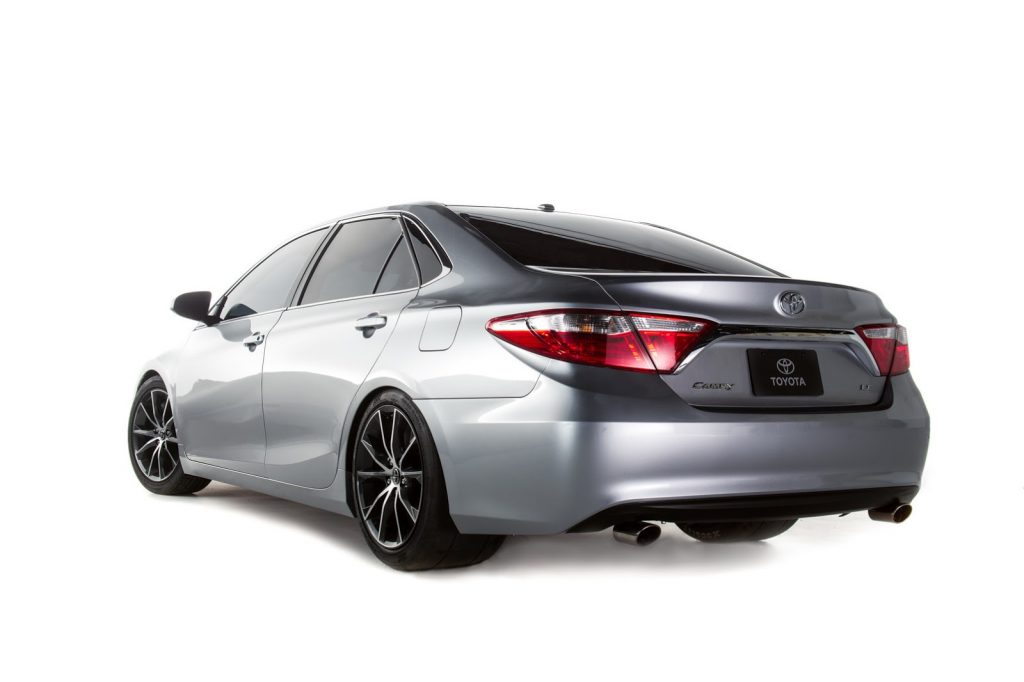 The 2015 Toyota Camry Sleeper insanity will certainly be on spotlight while being displayed at the booth of Toyota all throughout the SEMA week. Aside from just being a display, the sleeper Camry will flex its muscles by appearing at various NHRA drag events all over the country. Though it is obviously not going to reach mass production, prick drivers who wants to race a Camry, especially stock silver ones, will have second thoughts. 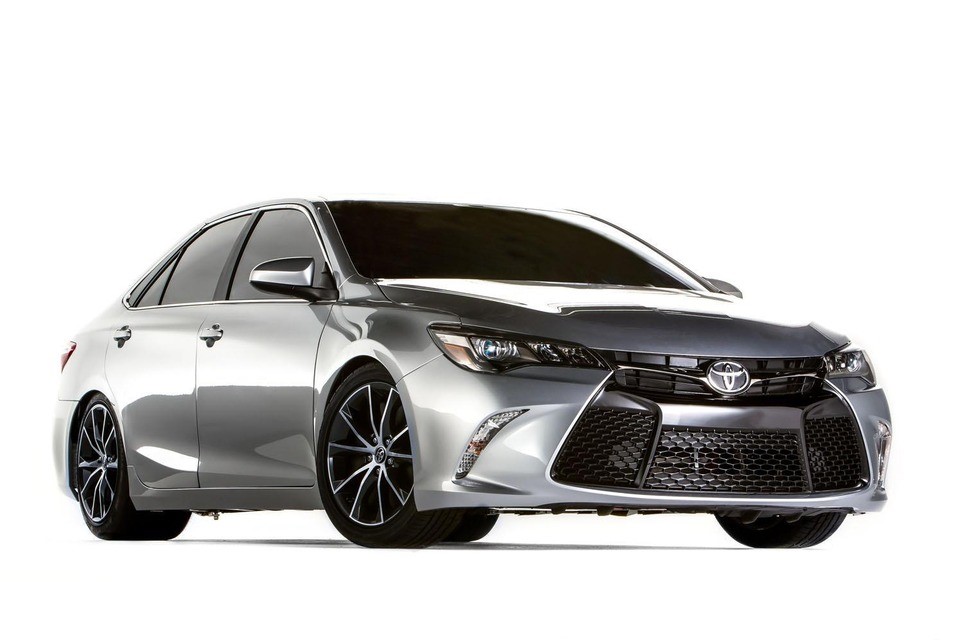 
10 Great Cars That Had A 5-Cylinder Engine
The Fastest, Heaviest, Longest, Slowest, Tallest, Lightest 2...
Best of 2020 Genesis
The 7 Fastest And Weirdest Cars and Their Ads of the 1970s!
The Most Exciting 1966 Cars And Tech That Revolutionized Dri...
Cannonball Run Countach Coming in Hot [Video]