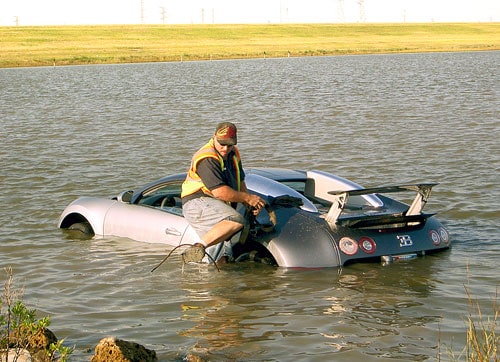 This article is NSFGH or not safe for GearHeads due to the all out massacre that has taken place with these works of art. Though it is funny to see an asshat wrecking his car when he tries to show off in front of Coffee & Cars; it isn’t funny to see a Ford pull out in front of a handcrafted SL 300 Gullwing classic that can never be original again. For those who still drive their million dollar cars I salute you because although some cars deserve to be in a museum, I find that the car was built to bring the driver joy on the road and not collecting dust. The problem is that sometimes shit happens and then it ends up on websites like this one, with dickheads like me showing it to the world. So prepare yourself for some heartache and some laughs but mostly heartache. We will post them in roughly the order from cheapest to most expensive although auction prices and jackasses crashing them cause great yearly fluctuations in overall value. 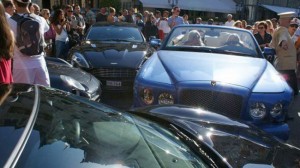 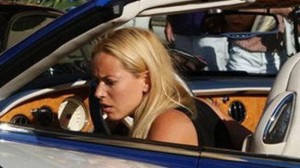 She is on the lookout for designer hand purses instead of Ferrari’s as this Bentley Azure driver has a blonde moment and rams into a Ferrari F430 thus causing a pileup involving an Aston Martin Rapide, Porsche 911 Turbo, and some shitty cheap Mercedes S Class. And it all happened in front of a ton of spectators thus causing an untold amount of embarrassment to ensue. 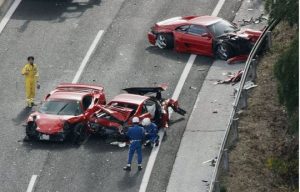 Somewhere in western Japan about a dozen people were taken to the hospital by salivating lawyers who injured paramedics at the scene. The accident involved eight Ferraris of different models, three Mercedes Benz models, one Lamborghini, as well as a Nissan and a Toyota “who the fuck cares” Prius. 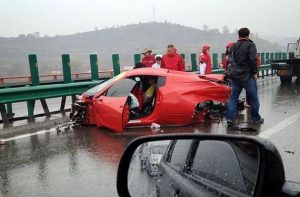 China, always looking to outdo Japan in every way, had a colossal fucking crash with 12 to 14 Ferraris and Lamborghinis and possibly some other exotics but we can’t find out much more because the communist state-run media covers absolutely everything up. But from the looks of some of the photos, Sum Ting Wong was behind the wheel and started the chain reaction of prancing horses and thus breaking their legs. Just remember that the camping chair you bought from Wall-Mart is probably made from recycled Ferrari metal. 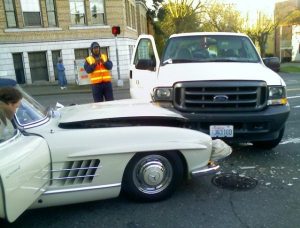 Yes the iconic car that was so gorgeous that it made us forget about the origin countries ugly past. With iconic “gullwing” doors that made you look like a boss when exiting, if you could manage to get out of the damn thing. The Mercedes Benz SL 300 Gullwing was and still is simply amazing. Well this one was simply amazing until it met face to face with a Ford Super Duty. This must have made the owner want to receive his early gullwings to heaven by putting a gun in his mouth. 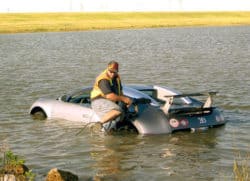 This is an American face palm as we watch the most magnificent vehicles of the aught decade be carelessly driven into the set of swamp people. This sixteen cylinder 1001hp making sexy beast was under the helm of a so called bird enthusiast and drove into a saltwater marsh. With the thought of insurance fraud on the table, this space cadet maybe shelling out more money in legal defense fees in order to keep him on the streets. So the cost may soon go up. 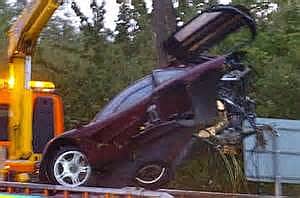 Rowan Atkinson is a character and also a damn good driver. Looking at his incredible time on the Top Gear track, this is a man that knows his shit. He has also been the sole owner of his incredible McLaren F1. Being one of the 107 that got built plus the fact that this was the most incredible car of its time makes this one a hard one to bare due to the fact that he really took good care of this car and it was his prized possession. 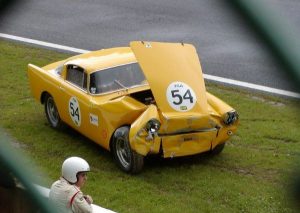 Racetracks are great to run your old cars on because there are no texters to look out for and you usually just come to a stop in some sand unless you’re this unlucky sap I mean chap that wrecks his 1959 Ferrari 250 GT “Tour de France”. During a classic race in 2003 this rich man poor man decided to turn this Ferrari into an MG Midget.

The more names and letters on an Italian supercar (even made-up) equal higher prices and extra rarity. For this Pagani Zonda only 24 others shared the same name and now thanks to Steffen Korbach which is a British person, there is one less. Accounts speak of a meeting with a barrier at just under 200mph and thanks to the monococque design this cocque sucker and his friend walked away with little injury. You get what you pay for kids. 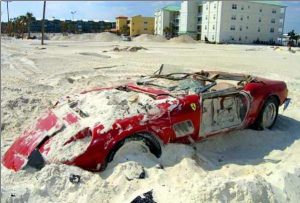 No dumbass wrecked this Ferrari, instead it was that bitch Mother Nature that decided to play “bury in the sand” with this classic. Yes this baby was left to endure the wrath of a hurricane that completely turned this horse into glue.

This anonymous owner was actually driving this in a historic race and did so without incident but when he drove off the raceway and onto the streets that’s when he screwed the pooch. With the car in front of him stopping short, this Ferrari that is worth more than most countries GDP made a crunch heard around the world. Now this absolute treasure will only be worth a few million. Who gives a shit, it’s only money. (Light’s Pall Mall with $1 bill)