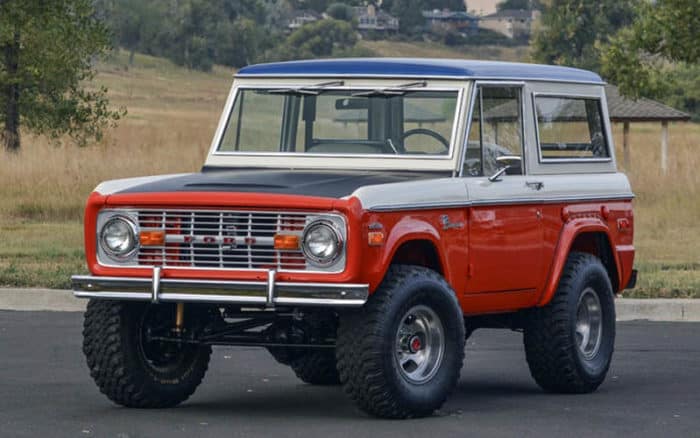 Ford has built some beautiful, fun and powerful trucks over the years, and we thought it might be fun to have a look back at some of the coolest old Ford trucks they ever put on the road.

We’ve compiled a list of cool old Ford trucks so if you love the original Bronco, have a “Highboy” in the garage, or have always wanted a Ranchero, you have come to the right place.

Keep reading to check out some of the coolest old Ford trucks we could find.

The original Bronco was a bit small (it was basically a compact SUV) to compete with the Blazer and Ramcharger in the towing and hauling category so for the second generation, Ford upped its size. This generation of the Bronco was built on an F-150 chassis, giving it more space and, more importantly, more power.

This Bronco came with a part-time four-wheel drive system and a V-8 under the hood. You could choose from a 5.8L 351M and the 6.6L 400. A C6 automatic transmission came standard or you could pick the optional 4-speed manual. This is the last generation of the Bronco to have a solid front axle, making it great for off-roading. 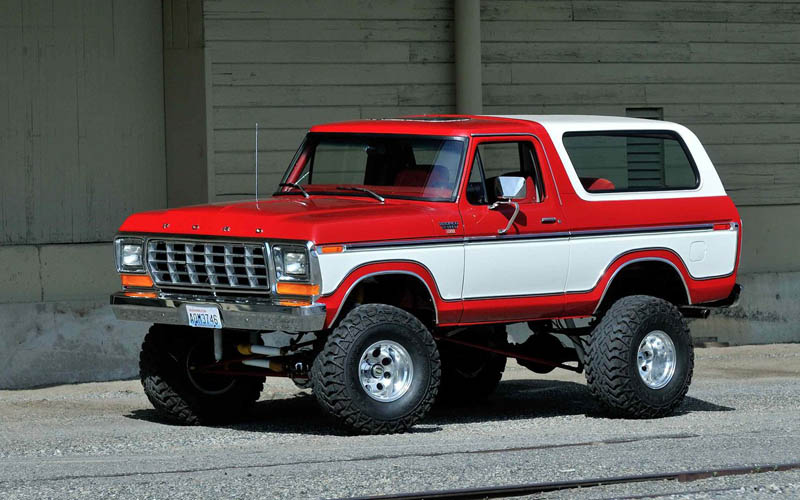 A removable top made the Bronco a perfect choice for sunny days and a retractable rear window that disappeared into the tailgate was added for this generation. A folding rear bench seat ups the cargo space so you could easily haul plenty of gear into the wild.

While we still like the look of the original Bronco best (see the Baja further down the list), the second generation is more practical for most people, especially if you have toys to tow.

This is what a pickup should look like, rugged, tall and bursting with attitude. This truck could handle 35-inch tires without lifting the suspension.

The name “Highboy” was not an official Ford term but a nickname given to it by enthusiasts. The 1977.5 models featured a negative arch leaf spring, which dropped the height by 4 inches leading to the “Highboy” nickname for the pre 1977.5 models and the post 1977.5 models being called “Lowboys”. 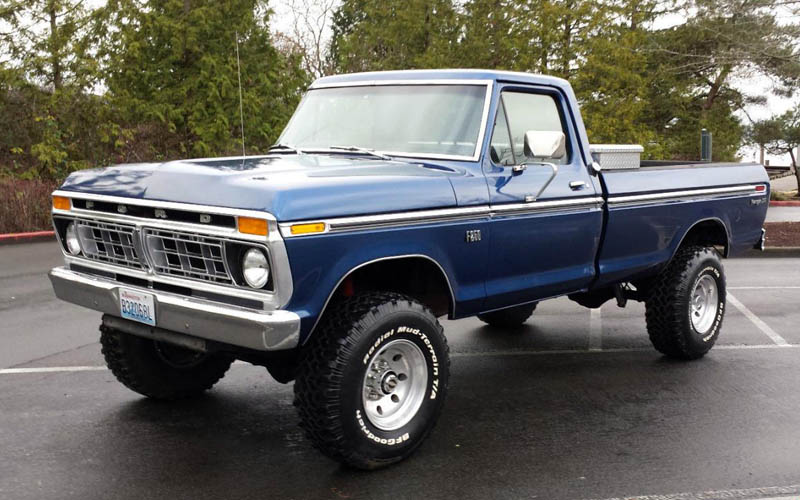 There are a few requirements for an F-250 to earn the “Highboy” designation:

The Highboy was available with a 360 V-8 or the less powerful six-cylinder. A C6 automatic transmission was a common choice on the Highboy.

Its tough look makes these trucks pretty collectible so they can be hard to find and sort of pricey for a fully restored version but if you have the budget, it’s a great choice if you are looking for a cool old ford truck.

Our list of cool old Ford trucks would certainly not be complete without the Ford Lightning. This performance truck was launched as a response to the Chevy 454 SS and it was not only a looker but cranked out some power as well.

Ford’s Special Vehicles Team (SVT) went to work on the 5.8-liter small block V-8 and managed to squeeze 240 horsepower out of it. A lowered suspension, new shocks, anti-roll bars and 17-inch tires put that power to the road and made the Lighting a great handling truck in addition to being a speed demon. 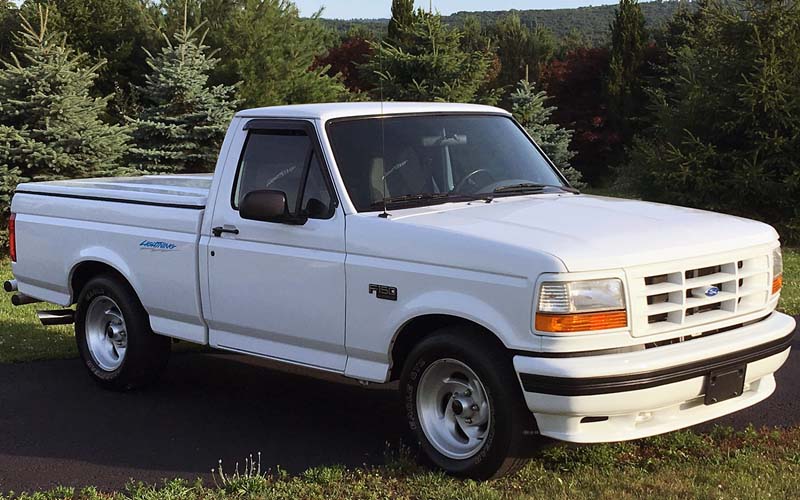 The Lightning cranked up to 60 mph in 7.2 seconds and blazed through the quarter mile in 15.6 seconds. The biggest complaint about the Lightning was that it gulped down gasoline.

The Lightning was so popular that it was brought back from 1999 to 2004 and now, Pioneer Ford a dealer in Bremen, Georgia, is sort of selling a new version of the Lightning. They are building 650-hp supercharged F-150s that imitate the look of the original Lightning. If you have $50,000 burning a hole in your pocket you can stick one in your garage.

This was the second generation of the F-100 and we think its one of the most beautiful. These were the first Ford trucks to have a wrap around windshield and carry the F-100 designation, the first generation was simply called the F1.

In addition to their beauty, they were pretty powerful for their day. In 1954, Ford dropped in an overhead valve V-8 that put out 130 horsepower. By 1956, it was up to almost 180. In addition, 1953 was the first year that an automatic transmission was put into a Ford pickup. 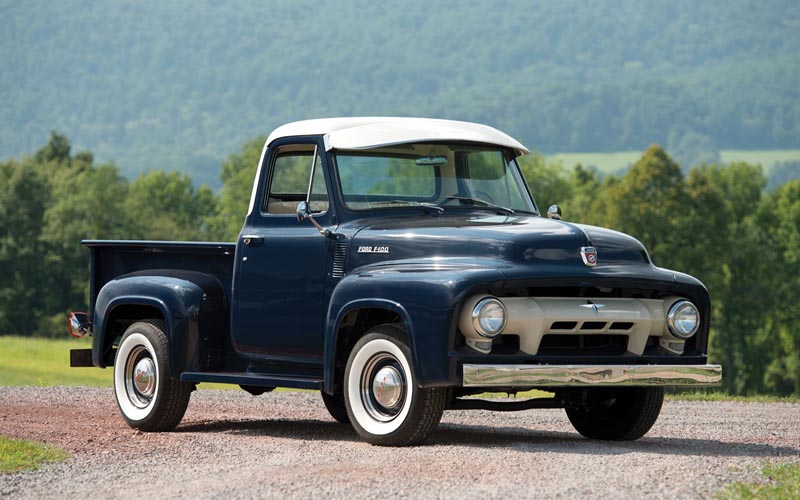 This is one of the best old Ford trucks as far as we are concerned, but they can be hard to come by. Restored versions tend to be pricey but it’s a great choice if you can get ahold of one.

This is the beginning of the pickup truck era for Ford, and while not the most exciting choice on our cool old ford trucks list, it was one of the first mass-produced trucks out there and helped build the foundation of the truck market we know today.

The Model T lineup was produced from 1908 to 1927 and is famous for being the first truly affordable car. It was an absolute game changer and over 15 million Model T’s were produced. 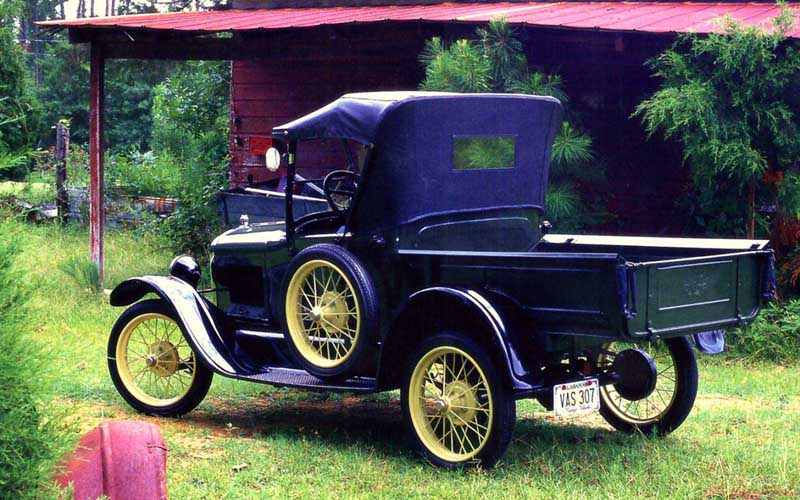 The Model T Runabout Pickup was introduced in 1925 and while it only managed to put out 20 horsepower, the box trunk helped change how cargo was delivered and helped set the standard for future pickups.

The Chevy El Camino is probably the best-known example in this category but the Ranchero was the first and is a pretty cool car/truck.

The Ranchero was introduced in 1957 and was in production until 1979. A total of 508,355 units were produced and while we like the early models, they are all pretty sweet.

The Ranchero is based on a two-door station wagon platform and was marketed as a light pickup that could haul a fair amount of cargo while being easy to operate and drive, like a car.

There is not enough space here to cover the various engines and features that were incorporated into the Ranchero over the years, but a few engine choices consisted of a 250 cubic-inch six-cylinder and a variety of V8 power plants that ranged from a standard 302 to a 428 cu-in. (7.0 L) Cobra Jet.

The Ranchero was a big hit with both consumers and automotive critics but is not as popular with collectors as the El Camino, so it is still possible to find a fairly affordable project car.

The Nite was Ford’s first attempt at putting a performance special edition pickup out on the streets and while it wasn’t a huge success, it led them to create the Lightning (we talked about this one earlier) a few years later. 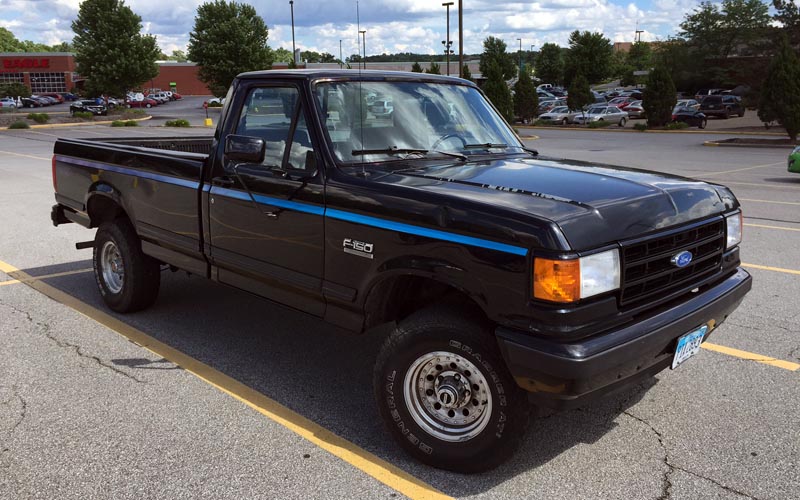 The Nite was sort of a half-assed attempt at a special edition. The upgraded features were an upgraded paint and decal job along with some forged aluminum wheels. A blackout trim on top of a black paint job made it stand out and a decal running down the side that transitioned from blue to magenta gave it a menacing look, but that is where the upgrades ended. The suspension was also tightened up but this was hardly a performance pickup.

The Bronco is so cool we had to put it on our list of cool old Ford trucks twice. These years fall into the first generation of Broncos, which were fairly small but oh so cool. The Baja was a special edition that was created by off-road racing legend Bill Stroppe and the Ford design team. 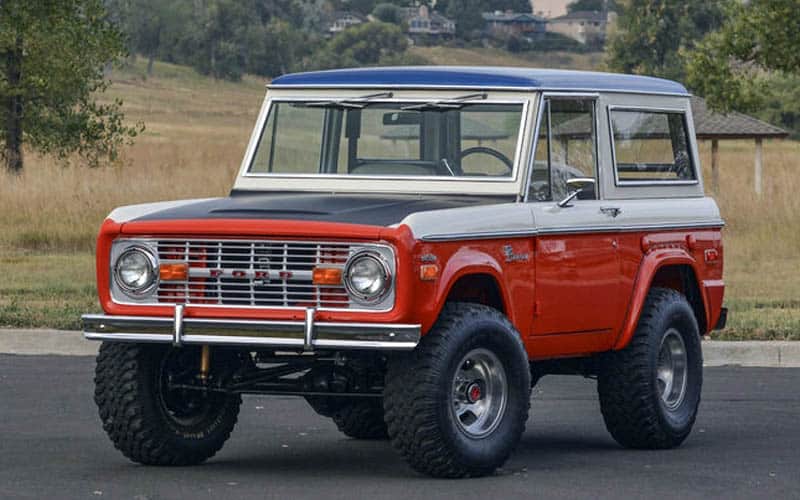 The Baja had a paint scheme that matched Stroppe’s racing trucks and was fitted with Gates Commando tires, quick ratio power steering, a roll bar, as well as a padded steering wheel. A 302-cid V-8 was dropped in with a C4 automatic transmission transferring the power to wheels.

Stoppe’s shop could further customize a Baja with a large selection of optional parts. Roll cages, winches, and off-road lights were popular, as were suspension upgrades.

The Baja cost almost $2,000 more than the standard Bronco, which was big cash back in the day; its high price limited sales. While not a huge seller (only 650 were produced) this is one of the coolest old Ford trucks on our list.