Dometic has a deep history in powered coolers that links back to the world’s first refrigerator. In early 2020 this Swedish brand launched its most advanced and featured electric cooler line ever, the CFX3 collection. The crown jewel of the collection is the Dometic CFX3 55IM, which even makes ice!

After a few big trips and some day to day use in my camper van, this is my in-depth Dometic CFX3 55IM review.

We got a sneak peek of the entire six model lineup, ranging from 36 to 99 liters of capacity, back in October 2019 during a week-long overland trip up and down the Baja peninsula. The coolers on the trip were all pre-production prototypes, but I finally got my hands on a production unit in early April 2020. I’ve been using the Dometic CFX3 55IM since, on all my van life adventures.

The Dometic CFX3 55IM is a rugged powered cooler from a trusted brand with a proven track record in 12v refrigeration. The CFX3 line possesses every feature a vehicle-based adventurer could ever want. The 55IM version has something special inside, for the first time in a Dometic portable fridge, an ice maker. All this quality and plethora of features does come at a price, however. The CFX3 55IM has an MSRP of $1,100. 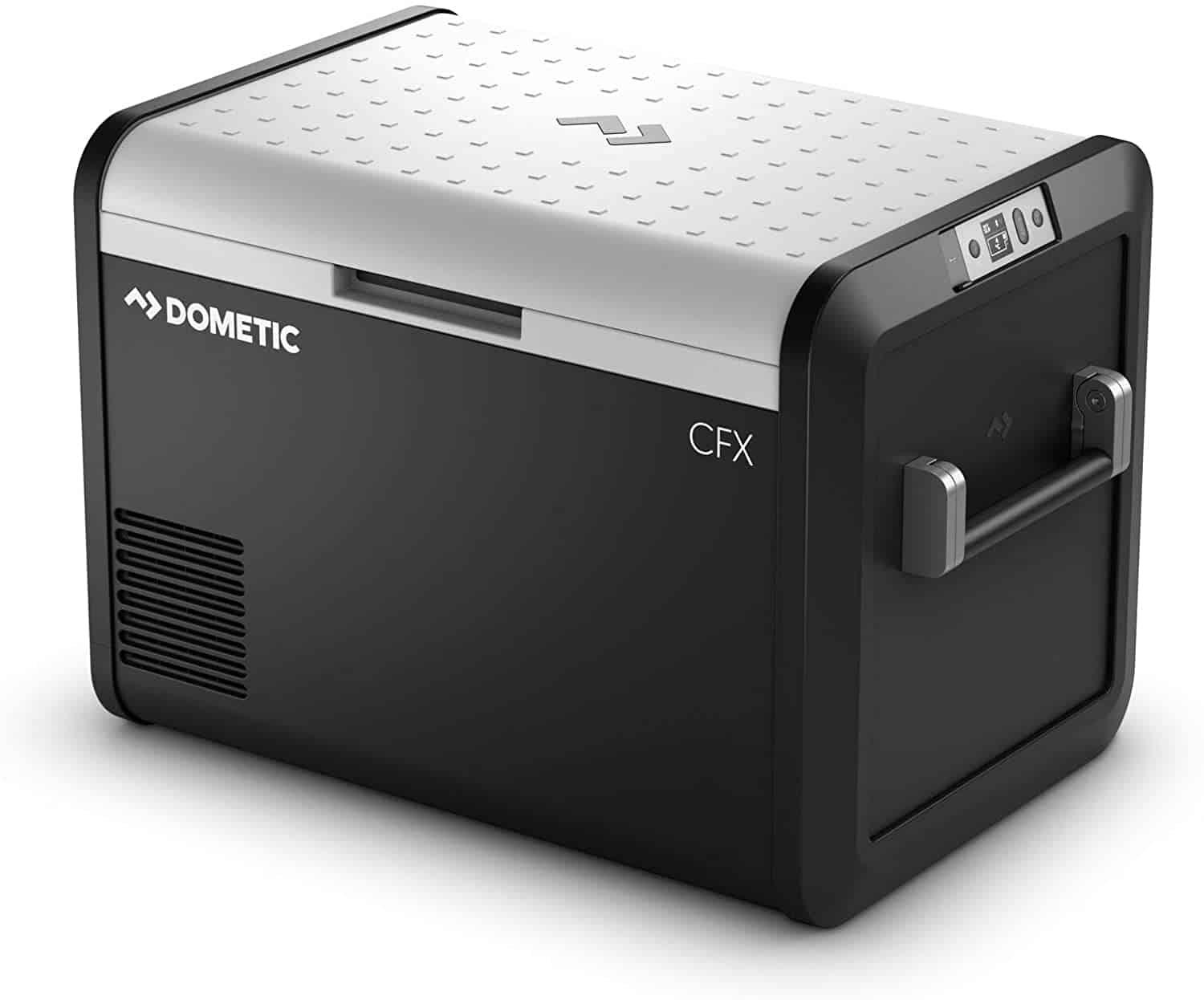 A mobile cooler needs to efficiently and reliably keep food cold, and the Dometic CFX3 55IM does just that. During the Baja trip, the cooler survived harsh conditions and treatment. Mulitple long days of vibrations and impacts from rough dirt roads and constant inundation by sand and dust did nothing to disrupt the cooler’s performance. Neither did exposure to direct sun or decidedly careless treatment by our group of ten.

We stuffed the cooler to the gills with food. Reliability was paramount in the remote, off-grid locations we were traveling. Regardless of sun, shade, or air temperature, the CFX3 55IM always stayed in the desired temperature range, inspiring confidence, especially with sensitive items like raw seafood.

The Dometic CFX3 55IM proved efficient, both in internal volume and power consumption.

The CFX line eliminates the dairy compartment commonly found in powered coolers, opening up space for all foods. A removable wire divider aided organization when desired. An extended evaporator that resides in all inner walls evenly distributed the chilled air.

Current draw is a prime concern for any overlander headed to remote, off-grid destinations. The proprietary variable motor speed optimization -VMSO3- compressor and the Active Gasket Technology limited power needs. Dometic stated that the CFX3 line roughly consumes 1 Ah per hour to hold 38°F with an external temperature of 90°F, with slight variations based on the model. The company also stated, “the Dometic CFX3 freezes down to -7°while using less power than a 60w light bulb.”

The Dometic CFX3 55IM may look svelte, but it’s built like a tank. The ExoFrame and its protected edges armored against impacts from off-road travel in overstuffed vehicles and withstood rough handling on land. Aluminum alloy handles provided stable tie-down anchors and made for easy portage. My daughter even uses it to jump down off the top bunk in our van; no harm, no foul.

The VMSO3 compressor has never sputtered despite the almost constant dust and wildly varied environmental conditions; from direct sun to misty cold, and extreme humidity, the compressor has continued its smooth operation.

The single-action lid latch hasn’t ever failed or gummed up from constant exposure to sand and other contaminants, like grease from cooking on our Baja adventure.

Finally, the soft-touch digital user interface is IP65-rated and certified as weatherproof.

Dometic equips the CFX3 55IM with high-end features that I never before associated with a mobile 12v refrigerator/freezer.

The CFX3 55IM connects to a CFX3 phone app via Bluetooth or WiFi. This app offers remote control and monitoring of internal temperature and can send warnings of an open lid. The app also logged a detailed record of temperatures and power consumption. This helps greatly when deciding how robust your off-grid vehicle power system needs to be.

The on-board high-resolution color display panel has pleasant soft-touch controls and was readable in direct sunlight. There is also a handy USB port for charging portable electronics.

I found controlling the Dometic CFX3 55IM through the control panel or the app intuitive – there was no need to consult the owner’s manual.

Finally, the Dometic CFX3 55IM did what no other 12v mobile cooler can do while running as a refrigerator: form ice. An independently controlled Rapid Freeze Plate made enough ice for four cocktails in the two included custom silicone ice trays. Making ice took between 2- and 2.5-hours, with ambient temperatures in the 80’s, and the cooler sometimes in direct sunlight.

In the world of powered coolers, the CFX3 55IM stands on top of the heap. The performance, efficiency, and durability was proven during our Baja trip and left me with no doubts that this is the cooler I wanted in my van. I have a lot of experience with various 12v coolers, and this one impresses in so many ways.

The high-end conveniences, although some were not important to me, helped catapult the Dometic CFX 55IM into the upper echelon of overlanding equipment. The convenience I do truly appreciate is the ice, ah the ice. For this chilled whiskey fan, having clean ice at the end of a long day always puts a smile on my face. No more warm whiskey for this guy!

But, alas, the price; $1,100 is a lot of money. But the popular ARB Classic Series II powered cooler, which I’ve also owned, lists for $1,032 (and interestingly is made by Dometic). Although it reliably kept food cold, it wasn’t in the same league in terms of quality or features. And it couldn’t make ice.

How much does the Dometic CFX3 55IM cost?

The Dometic CFX3 55IM has an MSRP of $1,100. Not inexpensive, but a super competitive price for such a feature-rich and quality 12v cooler.

Is the Dometic CFX3 55IM a fridge and freezer?

The Dometic CFX3 55IM is a fridge or a freezer and makes ice while in either mode. It has one zone, not two like some 12v fridge/freezers, but a separate chilling plate area to make ice.

What sizes are in the Dometic CFX3 12v cooler collection?

The Dometic CFX3 Fridge/Freezer Collection has six models, ranging from 36 to 99 liters of capacity.

The Dometic CFX3 55IM comes with a built in ice try and chiller plate system to make ice cubes. This is a feature not found elsewhere. The “IM” in the name stands for “ice maker.”

Seiji Ishii has enjoyed a lifetime of outdoor adventure and sports, from participant and competitor to coach and trainer, and finally as an editorial contributor. His interests have spanned cycling, climbing, motorcycling, overlanding, backpacking, trail running, and the training involved for all of it. He has also designed outdoor and off-road motorcycling gear. He lives in a wildlife refuge in Wimberley, Texas, with his daughter, itinerant dirtbags, a dog, and a cat. Read more of his musings at seijisays.com.