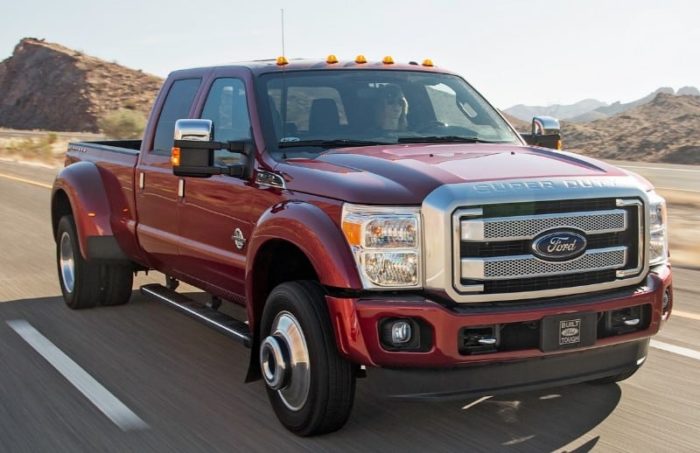 Anyone who spends time towing or hauling cargo knows that a dually truck is a must-have piece of equipment to get the job done. These pickup trucks feature four rear wheels instead of the typical two. This allows them to carry more weight over its rear axle. With this design, you have the perfect tool to carry heavy loads and campers plus you’ll be able to support a fifth-wheel.

Throughout the years, the dually truck market became competitive between a select few automakers. Some throughout the years were complete duds, but there is a handful that really impressed. While it would be difficult to choose the very best, we can narrow down some exceptional models to the top ten.

Let’s take a closer look at some of the first dually trucks and the impressive newer models as well. 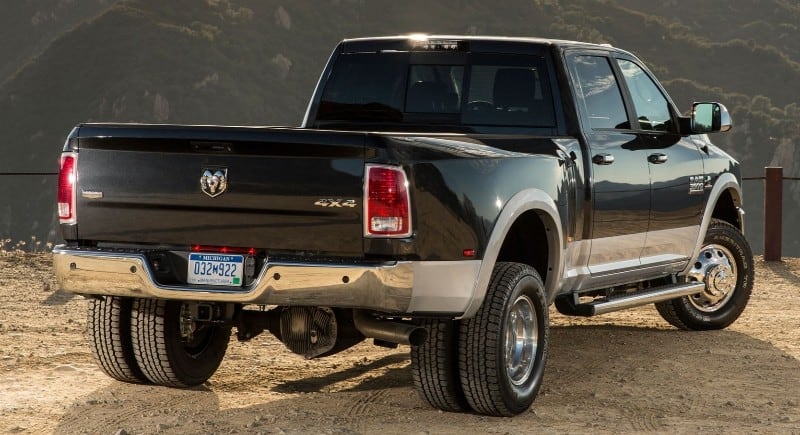 There are numerous differences between a dually truck and non-dually truck. It goes beyond the fact that a dually truck has four dual rear wheels while the conventional truck features two. Their purposes and capabilities vary from one another. Let’s take a look at the pros and cons of each.

The dually truck features an extra set of wheels on the rear axle. Most people don’t choose this type of truck for style, but more for practical purchases.

Pros of a Dually Truck

Cons of a Dually Truck

A non-dually truck features the standard four-wheel setup. There are numerous benefits to this type of design, especially for drivers that don’t haul a lot.

Pros of a Non-Dually Truck

Cons of a Non-Dually Truck

As you can see, choosing between a dually truck and non-dually truck is going to depend on what you use it for. Some people believe that a dually truck is the only way to go, while others wouldn’t dream of getting behind the wheel of one. With that said, let’s jump right into our favorite dually truck models. 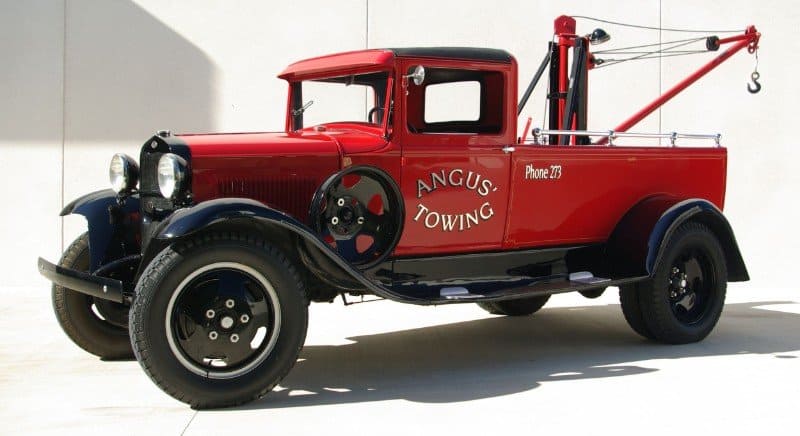 When the Model T was produced, Ford customers immediately started requesting a vehicle that could haul loads and provide more utility. They responded with the Model TT in 1917 which had the ability to carry a payload of a ton.

Just like the Model TT, they created the Model AA. It featured a chassis cab in two varying lengths, plus powertrain and axle options. While it was possible to purchase one with four wheels, there were also dually options.

Then, in 1933, Ford replaced that with the Model BB. Many of these were used for freight and mail vehicles as well as ambulances. In total, by 1941, Ford had some four million trucks. It appeared they’ve been a leader in the industry even from the beginning. As you’ll see later in the article, they continue to lead the pack. 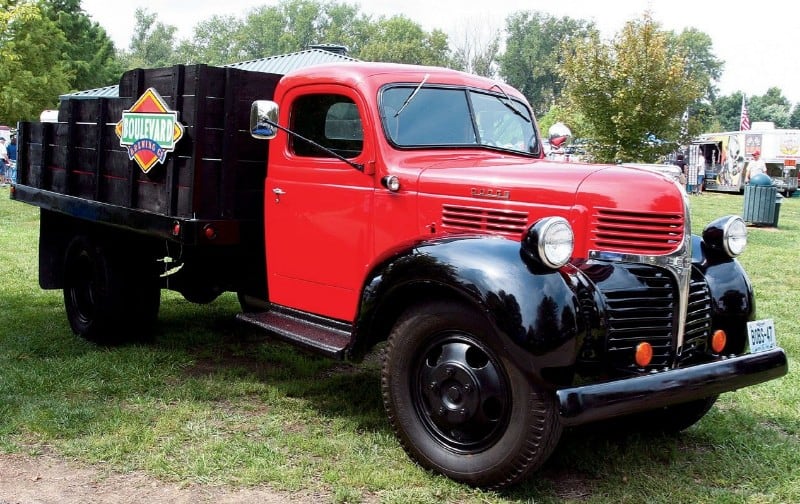 In 1939, Dodge started focusing on industry-related trucks. They featured heavier components geared toward their proposed use. They were also the first company within the Big Three to release a diesel-powered four-wheel drive pickup. That Dodge Power Wagon didn’t feature a dually design unless it was custom-made.

On the other hand, the Dodge dually was built with a nine-foot cargo box on a 133-inch wheelbase. Under the hood, it featured a 218 cubic-inch flathead six-cylinder engine that boasted of 75 horsepower. By 1942, they featured a shorter wheelbase of 120 inches ad cargo box measuring just 7.5 feet. This allowed for a new 230 cubic-inch flathead-six that produced 105 horsepower. 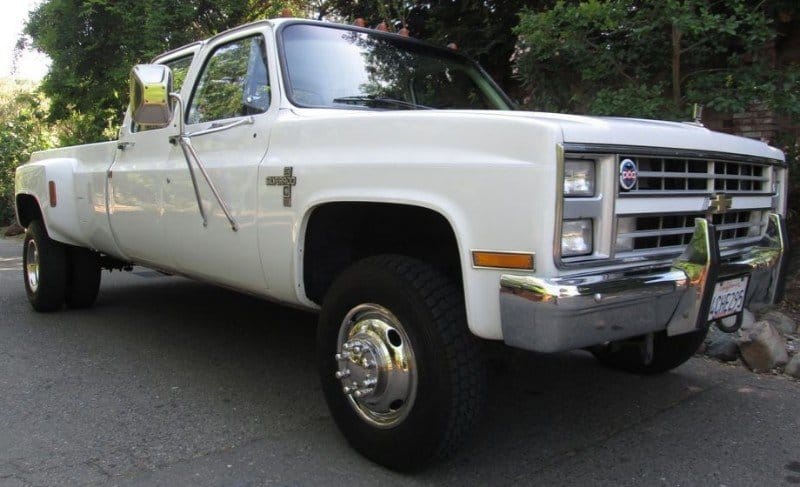 Chevy and their twin GMC were among some of the early manufacturers to incorporate the dually design as well. Their first mass-produced dually truck came in 1973 with the C/K. This truck first debuted in 1960 but didn’t feature a dually option until the third generation.

This created a huge breakthrough when it came to towing because the Big Doolie, as it was called, featured a GVWR of 10,000 pounds. With that and the 454 cid big block V8, it blew away the competition. In 1977, they further added four-wheel-drive to this beast. Ford couldn’t compete until 1980. 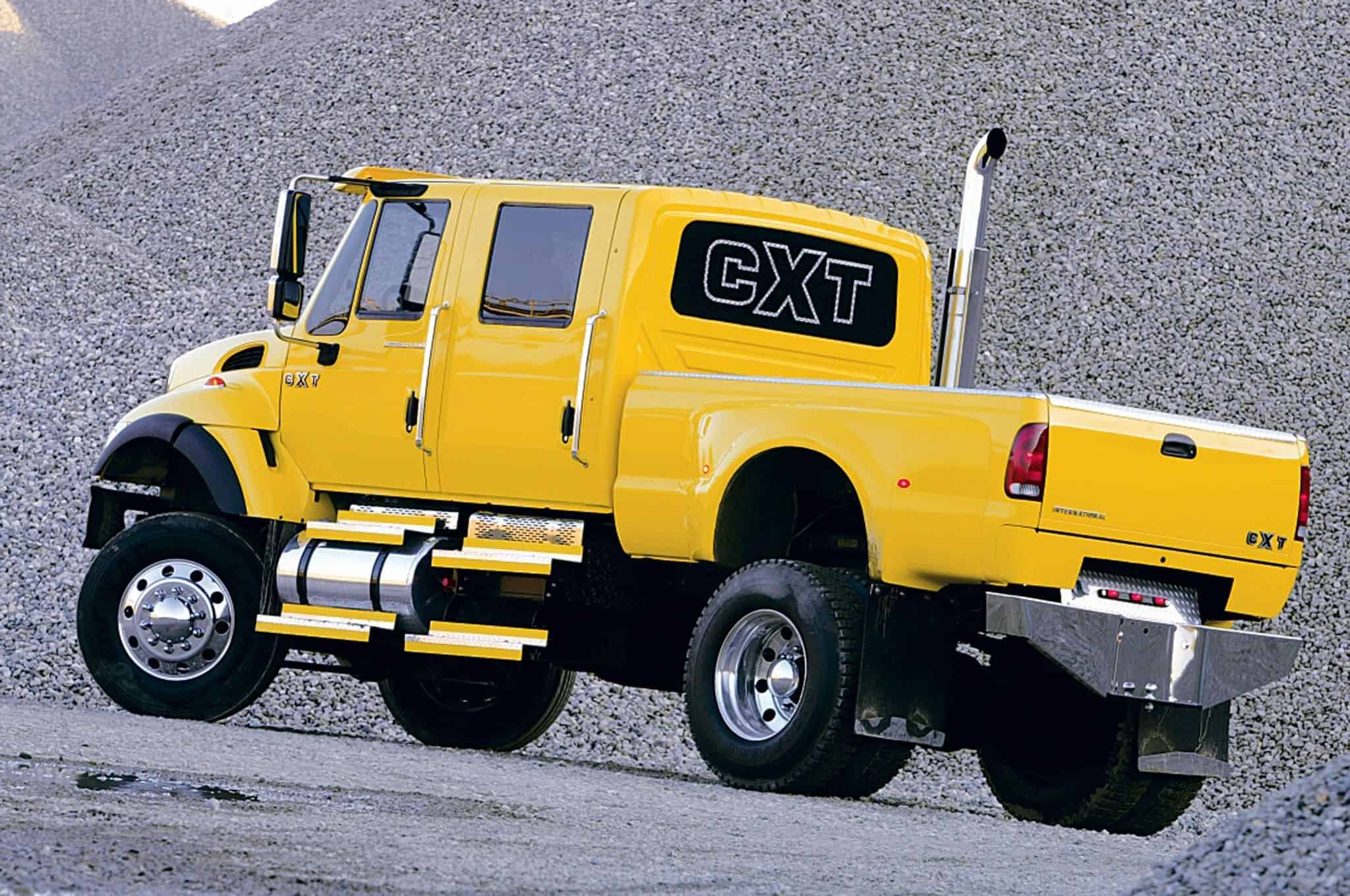 International set out to make something that caused the Hummer to look like a Hot Wheel, and they succeeded. During the early 2000s, they built a giant dually truck that caused people to notice. The CXT was a four-wheel-drive truck with a Ford Super Duty pickup bed.

The truck measured nine-foot high and handled a payload up to 12,000 pounds. That’s why it was more of a truck than a pickup, but we felt it still belonged on the list. Navistar targeted business owners with this dually truck. They claimed it would make a promotional vehicle because the owner could use it as a rolling billboard.

The CXT came with four-wheel-drive and offered either a four-door crew cab or extended cab design. It was powered by a 7.6-liter inline-6 turbodiesel that produced 220 horsepower, but the 2005 models and later offered an optional 8.7-liter inline-6 turbodiesel engine that made 300 horsepower. Both of these were paired with a five-speed Allison automatic transmission.

These trucks weren’t just geared toward work but had many comfort features as well. Leather seats were available along with a satellite radio and DVD player for rear passengers. It was both the tallest and heaviest pickup truck ever sold in America, and it couldn’t be driven without a commercial driver’s license. There’s really no comparison to the other dually trucks because the CXT had a towing capacity of 20 tons.

As can be expected, there wasn’t much demand for this truck so Navistar discontinued production in 2008.

As we step into the modern era of dually trucks, we come across one of the leaders, the Chevy Silverado 3500HD. In 2013, both the 2500HD and 3500HD won the J.D. Power Quality Award for the Large Heavy Duty Pickup segment but the 2500 didn’t come with a dually setup.

At the time, this was the best dually truck before you needed a commercial driver’s license. Looking at the numbers themselves, it’s easy to see why the 3500HD impressed enthusiasts. It’s capable of hauling 7,222 pounds of payload plus can tow up to 23,100 pounds. The utility wasn’t all that made it worth being on our list. The styling of this truck is handsome and the interior is noteworthy as well. In addition, it provides a quiet, comfortable ride; perfect for taking long trips.

During this model year, all the Big Three had good trucks, so it’s hard to choose the best. With that said, we picked the Chevy mainly because of the interior and superb ride. 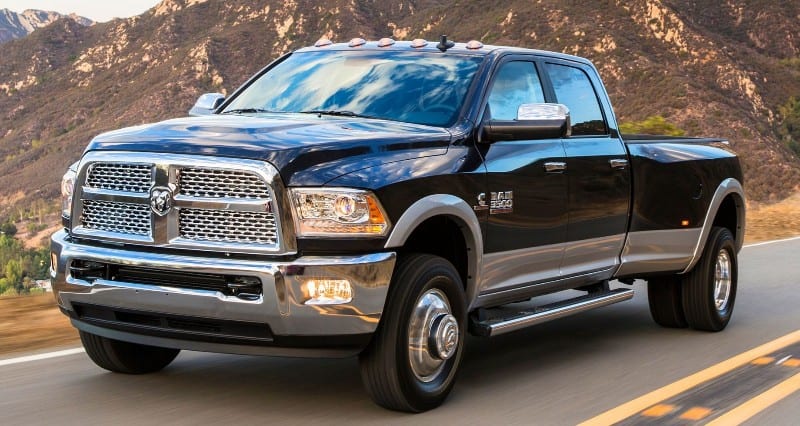 What’s interesting about this dually truck is that you can get it with a gasoline engine. The large 6.4-liter Hemi V8 was the largest at the time and delivered 410 horsepower. This was the best in class for the model year. There was also a 6.7-liter Cummins available which provides a 30,000-pound tow rating.

Many owners raved about the air suspension which was available without affecting the max tow rating. Other features included a high-quality cabin, roomy rear seat, quiet highway ride, and airbag system. Another notable quality of the Ram 3500 was the ability to have a fully capable work truck while also experiencing full luxury while in the cabin. There wasn’t another truck that featured as many creature comforts and an array of high-quality materials during this model year. 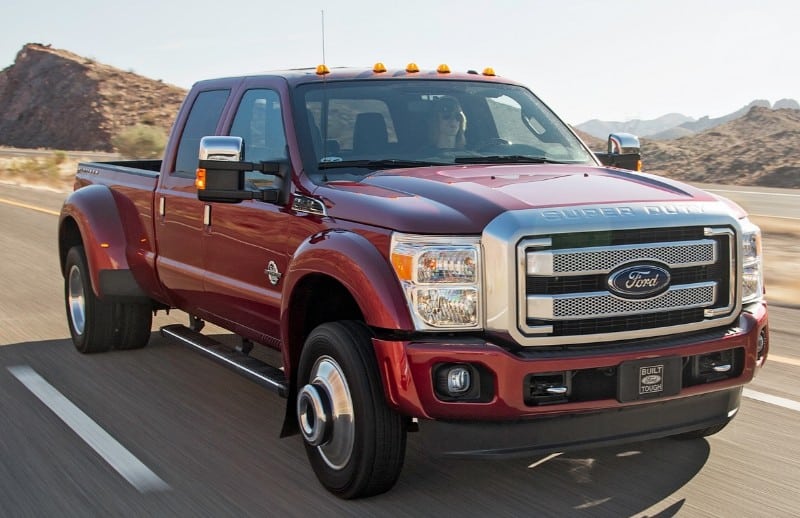 After picking a Ram for 2014 and a Chevy for 2013, it seemed ironic that the Ford Super Duty F-450 would win our choice for best dually truck of 2015. This brute is just a step from being a Class 5 medium-duty truck. The biggest improvement of this model year included the 6.7-liter Power Stroke diesel engine. This allowed it to pour out 440 horsepower and increase the tow rating to 31,200 pounds.

This truck appealed to a wide market. If the owner wanted heavy-duty trucking possibility, the F-450 offered everything needed to get the job done. You could grab a small load of wood, or move a friend’s furniture during the weekend. This granddaddy could pull more than other trucks in its segment. If the owner desired luxury instead, there were several options available to cater to the upscale trucker.

In addition to the upgraded towing ability, this truck also has upgraded wheels, suspension, fifth-wheel gooseneck, and steering. The downside to this model over some others is that there was only one body configuration for the year: the four-door crew cab, eight-foot cargo bed plus dually wheels. 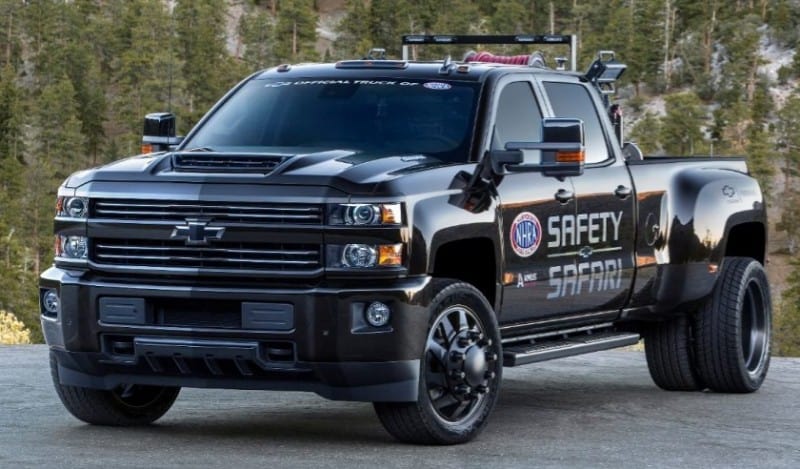 If you want a good dually truck from more recent years, the Chevrolet Silverado 3500 High Country is our top pick. It features a 6.6-liter turbo-diesel Duramax V8 engine that produces 445 horsepower. This is paired with an Allison 1000 six-speed automatic transmission and part-time four-wheel-drive.

It takes the top marks for equipment, price, and performance, so it’s an all-around great buy. What really makes the difference in this model year came down to price. You could purchase a mid-level trim on the Ram or Ford for the same price that Chevy was offering their luxury trim level. Why not opt for more?

Another perk of this dually truck is the quiet cabin. It came out more peaceful than the competition, even when driving down the highway. On top of that, it got decent fuel mileage, which isn’t easy to achieve with a big truck. The only thing that seems to be a downer with this model is the lack of interior storage. There aren’t many places to put your technology or other gear while driving. 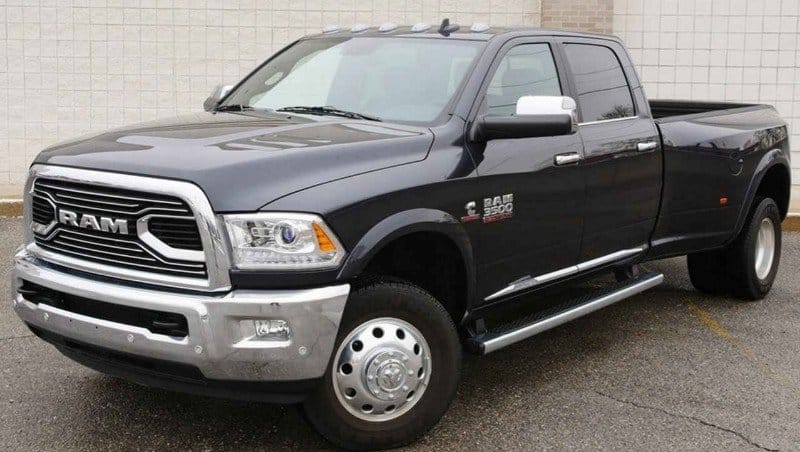 The Ram 3500 has a macho appearance that’s conservative and appealing. The updated cabin comes with easy-to-use controls and a Uconnect system. There are also six trim options available, three cab styles, and two-bed lengths. The dually truck configuration is available on all the 3500 models plus there are three power options. 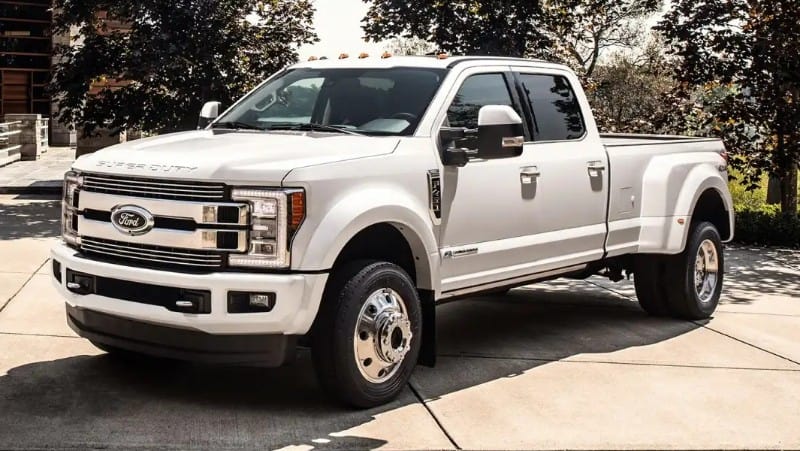 There’s a reason the F-Series continues to be the best-selling truck in America and the 2019 F-350 just proves what this automaker has going for it. The maximum tow capacity reaches 21,000 pounds or up to 32,000 through a gooseneck hitch. It can also be programmed to remember trailers and recall the blind-spot plus brake gain settings.

It’s capable of carrying anything you need to haul and offers a flexible bed tie-down system as well. There’s even an LED bed lighting system so working in the dark is a breeze. When drivers want to take their family out, they find that the cabin is exceptionally comfortable and functional as well.  There’s no doubt that the 2019 Ford F-350 Super Duty will go down in history as a popular dually truck for sale.

This model offers two power options: a standard 6.2-liter V8 and 6.7-liter turbocharged diesel V8. There’s also a complete collection of driver assist features. The adaptive cruise control operates well even when hauling a 30,000 pound load. Other features like the blind-spot monitoring, lane keeping assist, and rearview camera also make it safer to take that next load down the road.

Which Dually Truck is the Best?

We’ve listed our top choices for the best dually truck from years gone by and modern vehicles as well. Some people prefer the classics, while others like the convenience and modern comforts of the newer lineups. The purpose of using the dually truck is another reason people choose different favorites. For utility needs, the main concern will be hauling and towing capability. If driving a dually truck is just for the appearance, the comfort and luxury are more prominent.


The Best Jeep Engines And Weirdest Factory Motors Ever Produ...
9 Biggest BMW Recalls of All Time
The Top 6 Biggest Cars in the World
The 2022 Acura MDX Is Not a Frumpy Family Hauler
9 Top Mods for Your Pickup Truck
$200/Month Total Ownership Cost: How I Scored An Insane Elec...