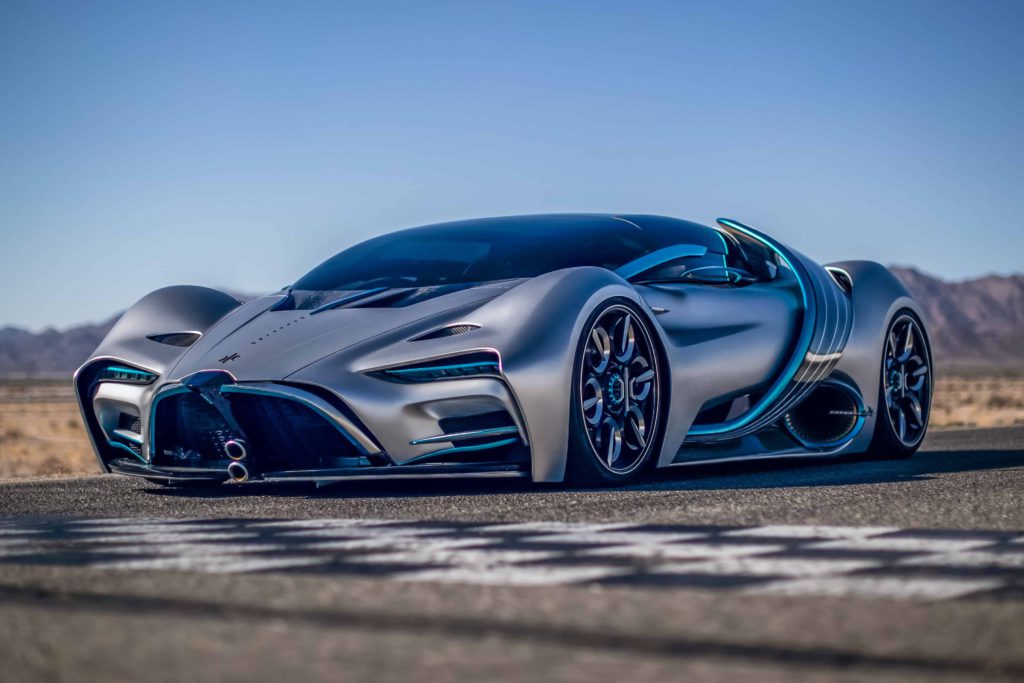 There is little doubt that something other than internal combustion will power the next crop of hypercars. The latest entry into the hypercar world comes from Hyperion Motors, with the halo Hyperion XP-1. The XP-1 is a hydrogen-fueled car of the not-so-distant future.

There are at least four prototypes of the XP-1 currently in existence. Hyperion will deliver production cars of the early “Discovery Series” of the XP-1 to investors as soon as 2021. You can express interest in owning an XP-1 through the Hyperion website, with deliveries starting in early 2022.

Don’t expect the Hyperion XP-1 hypercar to come cheap though. Pricing hasn’t yet been announced. The best we could get out of CEO Angelo Kafantaris is to expect pricing to be in the “seven figures range.” What you can expect for that big sum is an AWD 2-seater that can go 0-60 mph in 2.2-seconds and reach a 221+ mph top speed. Oh yea, it also has an insane 1,000-mile range and a sub-5-minute refuel time.

Hyperion Motors is a division of Hyperion, which also encompasses Hyperion Energy and Hyperion Aerospace. The thread that binds all these divisions is the focus on hydrogen-based power and delivery. Hyperion is based in Orange, CA. A team of Ph.D. scientists founded it in 2011.

The Hyperion XP-1 hypercar is the culmination of nearly 10-years of development, testing, and research by over 200 researchers and scientists. Hyperion started with a focus on hydrogen refueling stations but switched focus in 2015 to first pursue bringing a vehicle to market. Don’t worry though, the commercial hydrogen-refueling stations will be coming in a few months. 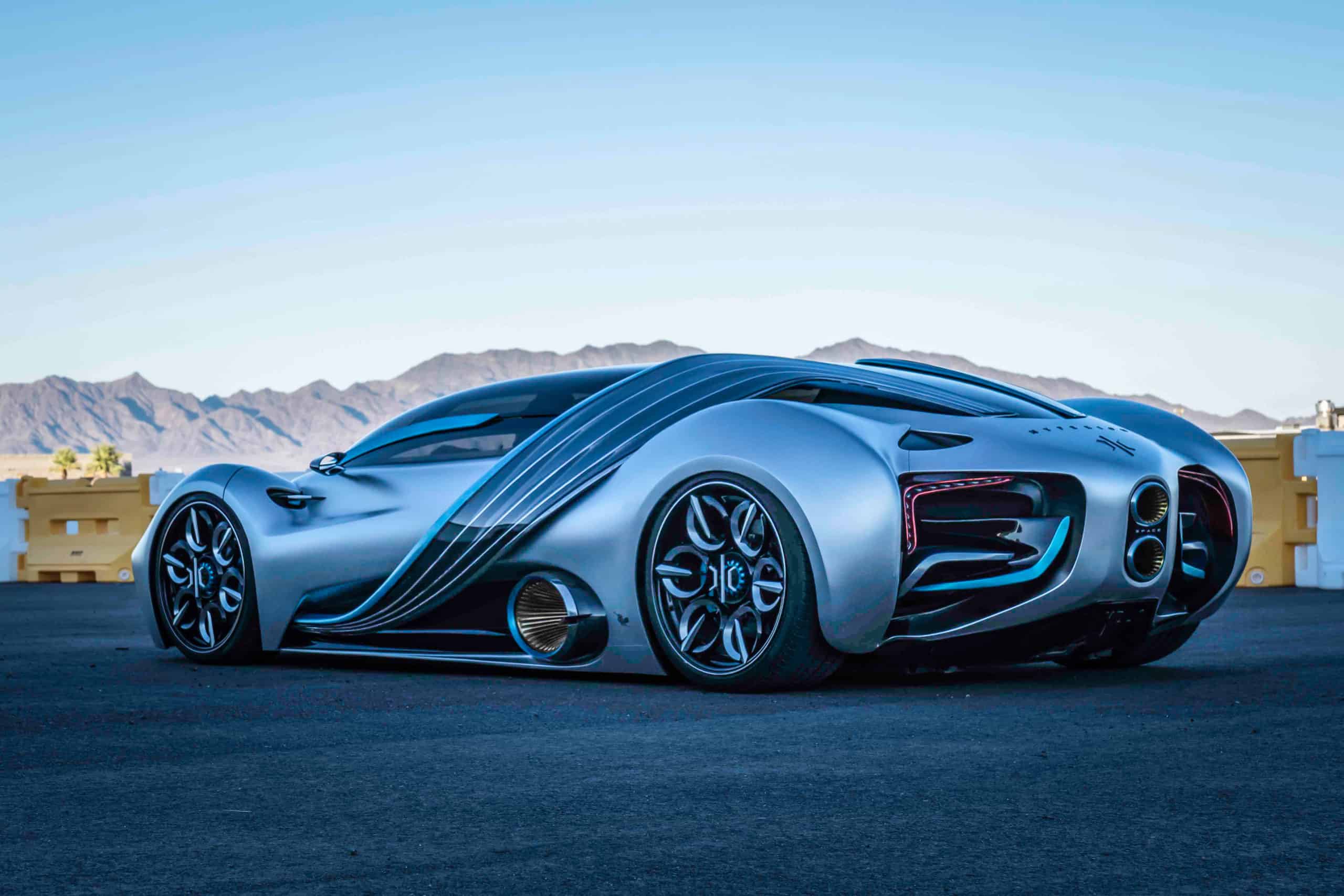 The insane looks of the Hyperion XP-1 aren’t a mistake. Not only do they showcase the technologies at play, but play off of the background CEO Angelo Kafantaris has with Mattel/HotWheels.

The XP-1 is “100% engineered, designed, and hand-built in the USA.” It will produce only 300 XP-1 cars over a few year run and include a wide range of variants. While Hyperion Motors will be selling directly to consumers, it will also sell in some major markets through already established super luxury car dealers.

At only 43″ tall, 83″ wide and with massive 13.7″ wide tires at the rear, the proportions of the XP-1 look big but are actually quite small. The car will also weight in at under 2,275 lbs., a feat very few modern cars can accomplish.

This AWD hypercar has a 3-speed transmission and can hit 60 mph from a standstill in only 2.2-second. It’s doubtful that it leaves the first gear for that run-up. It no doubt uses all three gear to hit it’s projected top speed of over 221 mph.

The feat that Hyperion is super proud of, and one of the key factors in making hydrogen-powered cars hit the mainstream, is a massive range. XP-1 has an estimated 1,016-mile range, with 55% city and 45% highway driving. Range anxiety is no longer an issue with this car! A full recharge of hydrogen for the XP-1 should also take less than 5-minutes at “public stations.”

Hyperion is bringing to market a new way to integrate hydrogen as a fuel source into the automobile. It believes that hydrogen is best used as power storage versus combustion in the automotive application. This direction uses a “proton exchange membrane (PEM) fuel cell power module” and “ultra-capacitor energy storage” through a “carbon fiber hydrogen storage system.” This setup in combination with “high-efficiency permanent magnet electric motors” offers the same benefits of current battery-electric propulsion without the weight.

NASA pioneered this ultra-light storage technology. Electric energy is stored through fuel cells, versus heavy batteries. A big advantage, besides the weight savings, of this type of hydrogen system, is that it works well in all temperatures and climates. Traditional battery systems in electric cars require continuous temperature maintenance.

On top of the crazy light hydrogen system, the rest of the XP-1 is built with weight savings in mind as well. Each car will be handbuilt in an aircraft facility out of mostly carbon and titanium. The XP-1 will have “titanium-reinforced composite bodywork” and a “carbon titanium monocoque (metal-composite matrix).” It will also have a special “space-grade” aluminum in the double-wishbone suspension. All of these technologies Hyperion is claiming as firsts in the automotive space. 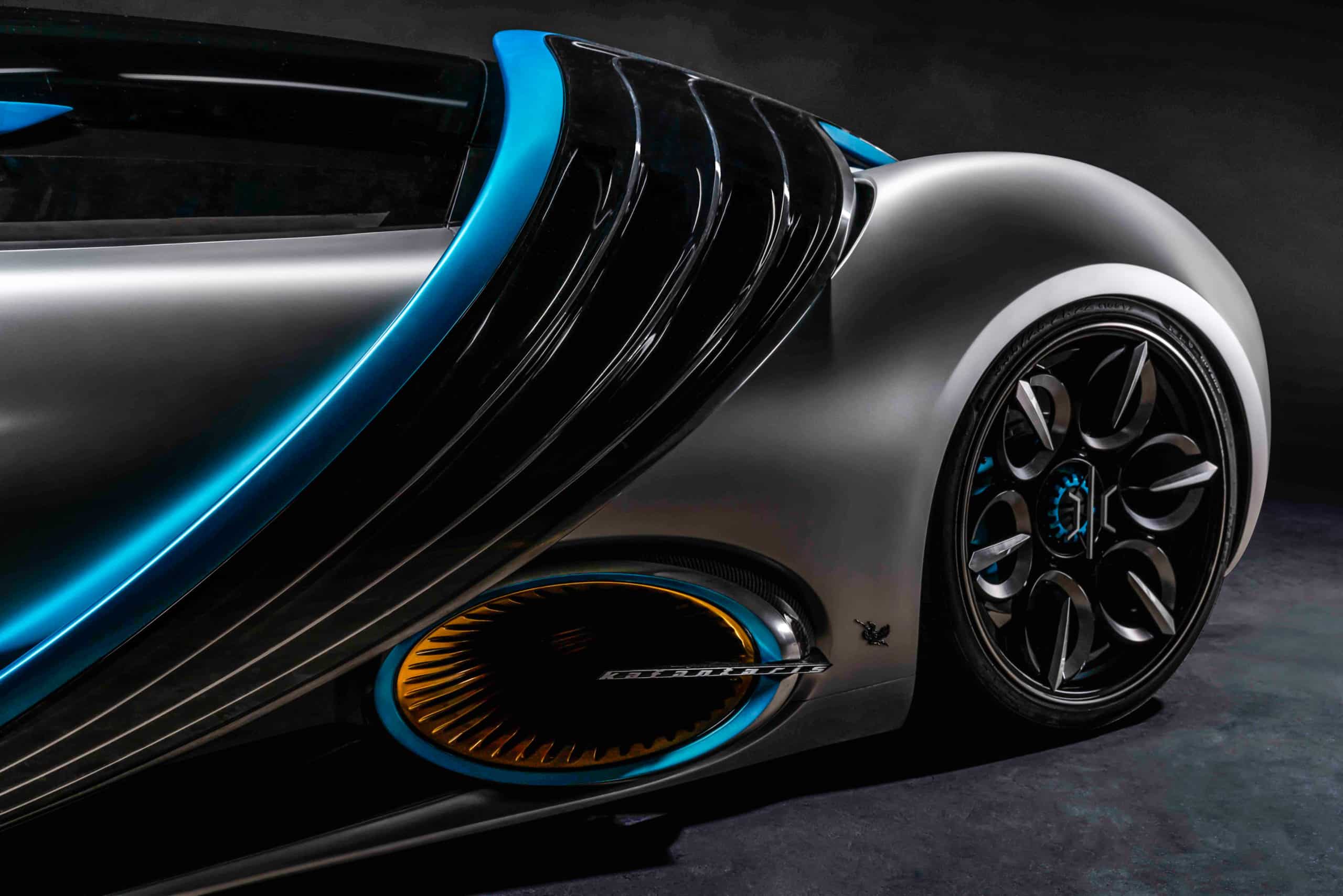 The Hyperion XP-1 will no doubt cut through the air like a hot knife through butter. While it has lots of smooth curvy lines like most modern hypercars, it also has some super aggressive sharp edges throughout as well.

One of the main attractions of the car has to be the buttresses on each side. While these look pretty cool, they are actually super functional. They are active aerodynamic structures and also solar panels that can articulate to follow the sun when parked. This system keeps the car powered and improves cornering at high speeds. They will no doubt make it a bit harder to get in and out of the vehicle, however, as the door sills are going to be super wide.

Inside the Hyperion XP-1 you get the typical modern hypercar treatment, where hand-stitched leather covers carbon fiber seats. You also get a titanium gear selector and pedals. Inside, a huge 98″ curved screen dominates the dash and the 134″ wrap-around glass canopy, which has “privacy tint control.” We’re only guessing, but it sounds like you won’t need to add window tint to your vehicle upgrade list with the XP-1.

If the Hyperion XP-1 actually makes it to production, it will no doubt compete against the top hypercars in the world. It looks incredibly futuristic, is scary fast, and has the practicality of a super long range. It also has that early adopter cool factor with its unique hydrogen energy storage system. 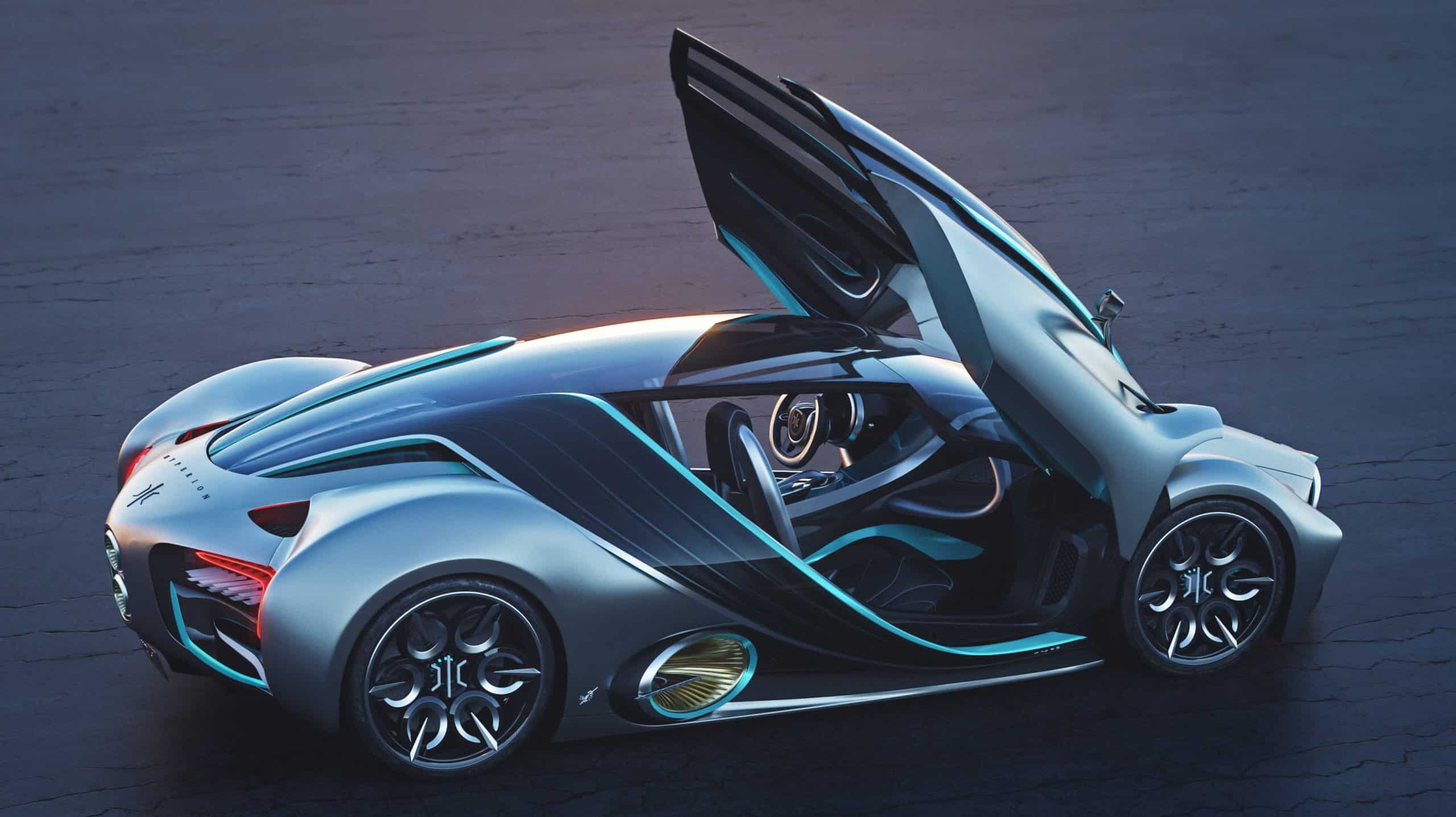 The just-revealed GMA T.50 is probably the last of the V12 hypercars, and the Hyperion XP-1 is what the hypercars of the future are more likely to be all about. both of these cars are insanely lightweight, incredibly fast, have super limited production numbers, astronomical price tags, and absolutely horrible names.

While it might be a bit early to speculate on a car company that hasn’t produced a car yet, Hyperion Motors has some big plans. The XP-1 is the halo car that showcases the incredible capabilities of hydrogen fuel cell technologies. Before the end of 2020, Hyperion is also expected to release information on its first commercial product, a low-cost Hydrogen refueling station system.

Besides these early products, Hyperion is really looking to push forward in a wide range of industries with the Hydrogen fuel technologies that it’s working on. Specifically, they plan to reveal at least two more consumer vehicles before the XP-1 even hits the streets, with the new vehicles being much more mass market and affordable. They are also looking to disrupt the long-range trucking, aerospace, and energy production/storage industries. We wish them luck, as those are some seriously lofty goals! 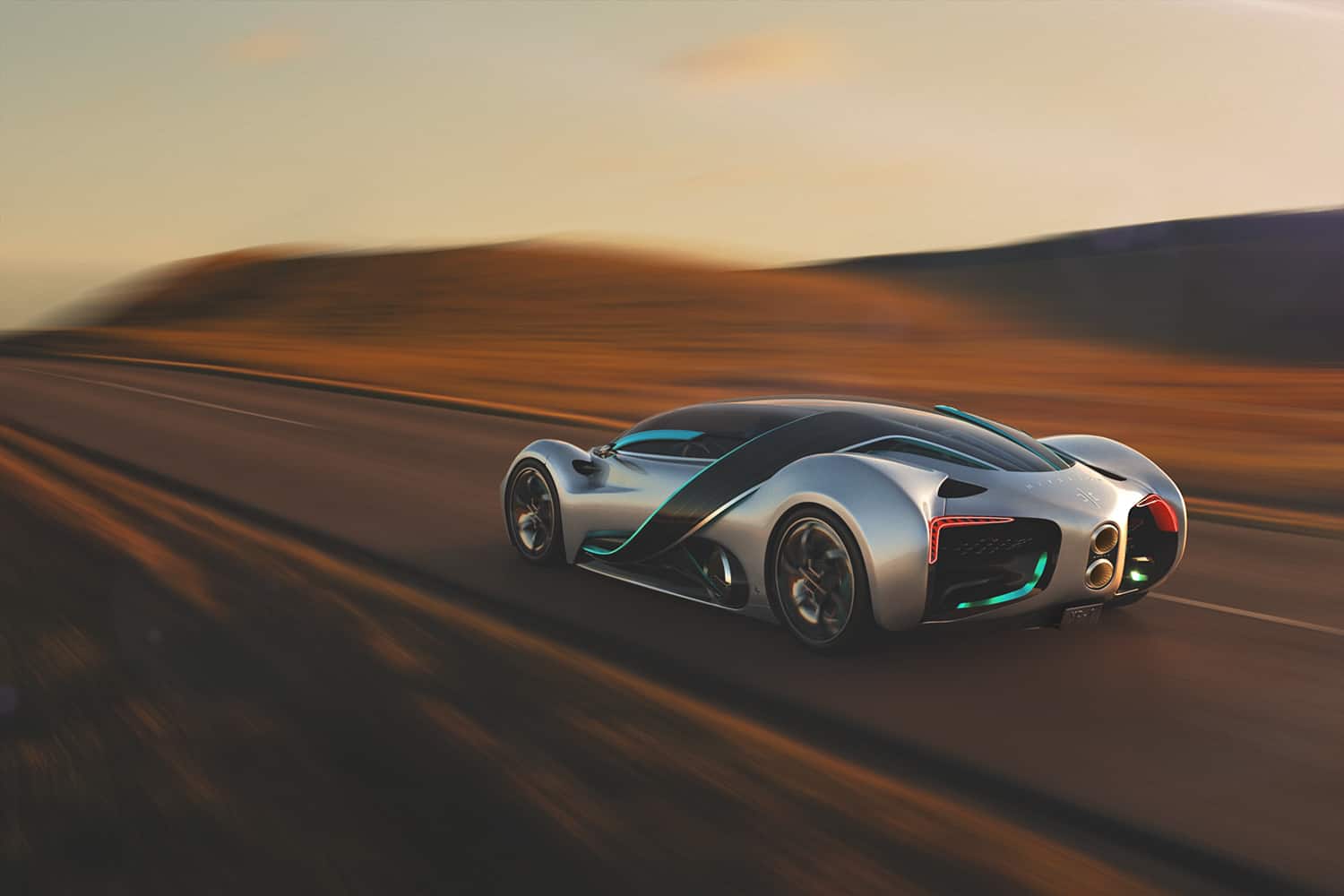 
What You Need to Know About The 2022 Ford Bronco Raptor
Tesla Model S 70D Is The Only Entry Level Car That Could Eve...
Bond Dreams Realized: Limited Edition Aston Martin DB5 2/3rd...
The Dodge Ram Runner.
The Best of 2021 Volvo
2019 Camaro Crossover Confirmed