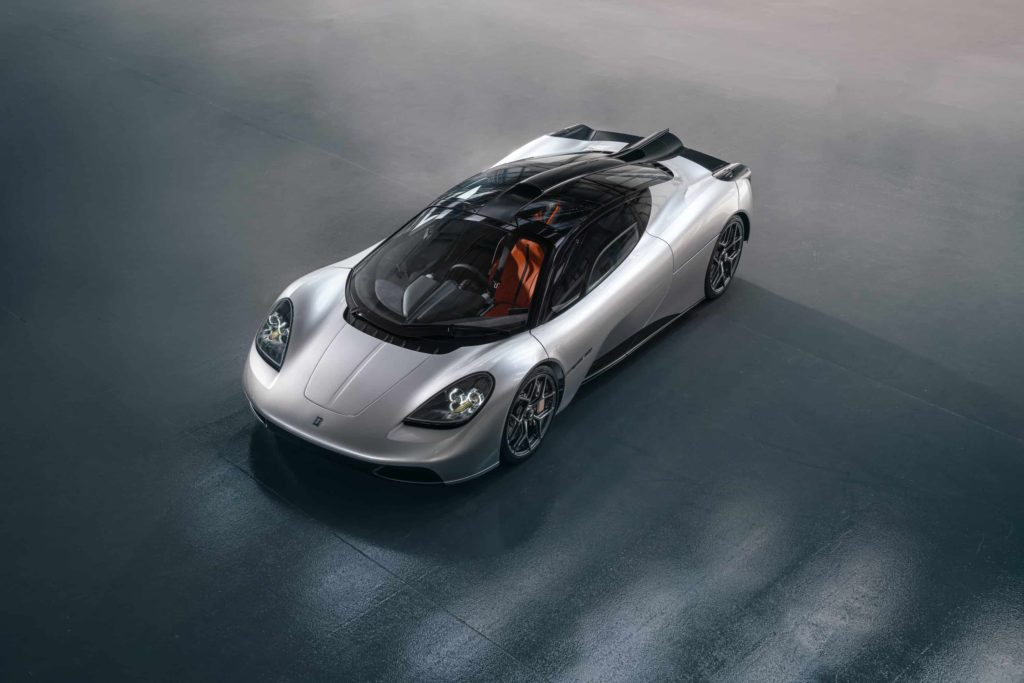 Famed car designer Gordon Murry has started his own car company and plans to bring us the ultimate driver focused lightweight supercar. The Gordon Murray Automotive T.50 is a truly modern interpretation of the famed McLaren F1, which Gordon also penned. Gordon Murray Automotive states that the T.50 is “engineered to be the most driver-centric supercar ever built.” We think the car is incredible in all ways, besides the forgettable name.

The T.50 is a car that is not designed by committee, but instead as a pure driver experience focused ultra-lightweight supercar from the proven mind of Gordon Murray. A naturally-aspirated V12 is rear-mid-engine mounted, driving the rear wheels through a 6-speed manual transmission. The cockpit/cabin of the T.50 offers a centered driver’s seat, in a three-seater configuration. The Gordon Murry Automotive T.50 is loaded with performance and comfort features, while somehow only weighing a scant 2,174-pounds. 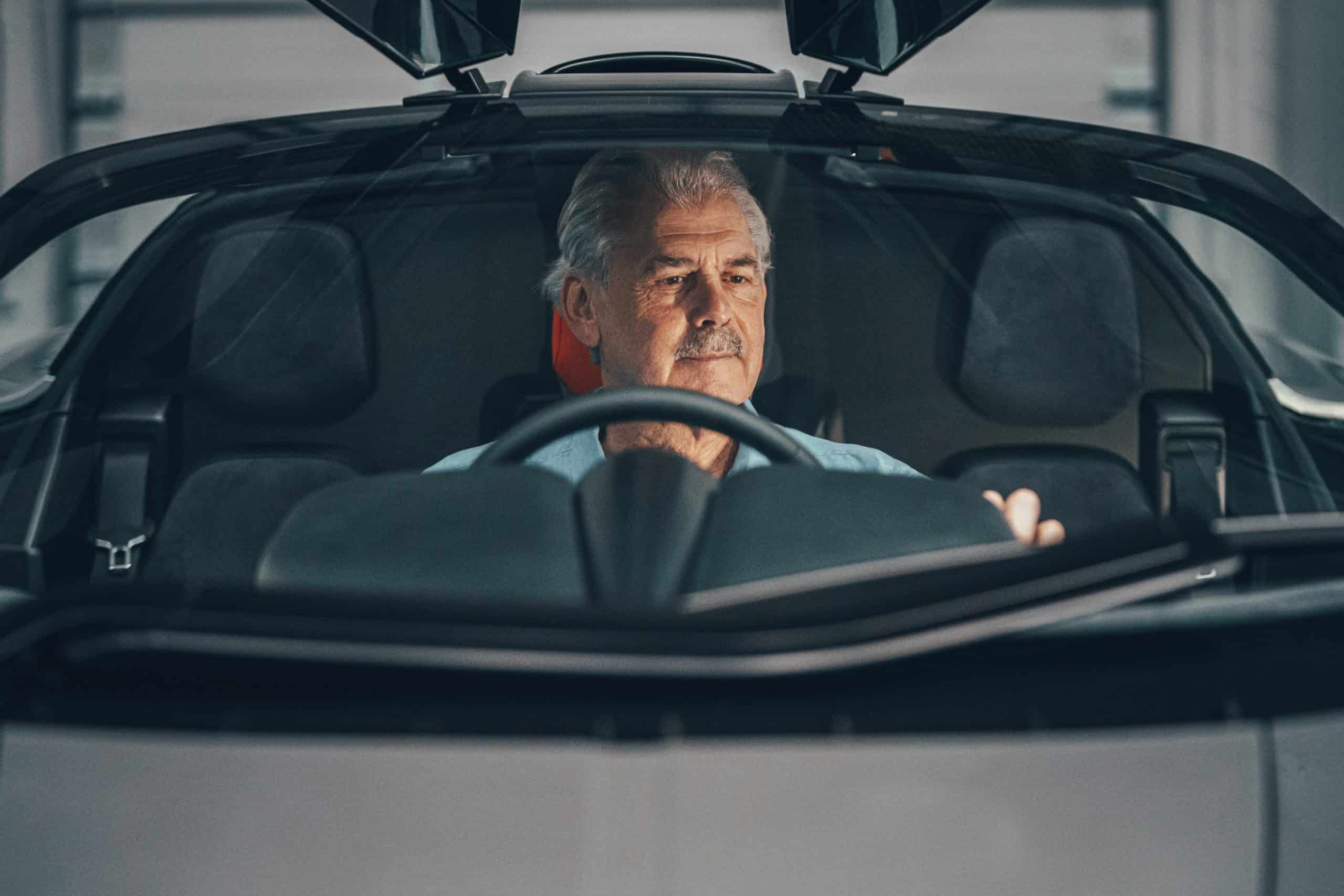 “From the first touch of the titanium throttle pedal to the V12 screaming at 12,100rpm, the driver experience will surpass any supercar ever built. No other road car can deliver the package of power, instant responsiveness and driver feedback in such a direct and focused way while remaining comfortable, refined and usable every day.” -Professor Gordon Murray CBE 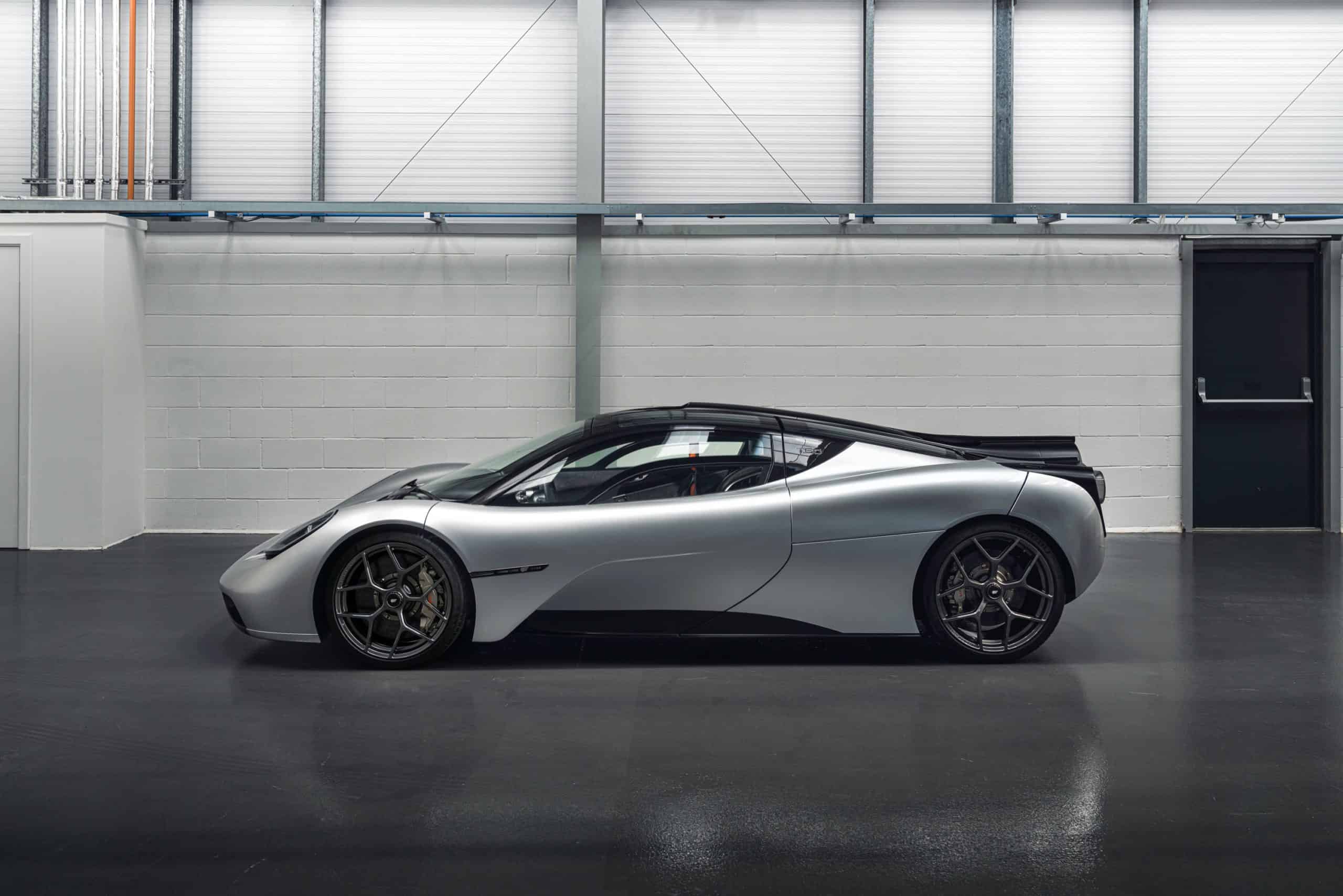 At over $2.6-million and a limit of only 100 cars, you might not think the Gordon Murry T.50 is much of a bargain. We’d beg to differ, however, as it is a car that no doubt will only appreciate in value, and can be purchased new at a fraction of the cost of an original McLaren F1 today. Consider that only 106 F1 were ever built, with only 64 still on the road, and current prices going for north of $14-million.

This is a truly special automobile. The T.50 might be the last of the great V12 supercars to ever roam our planet. Most modern supercars are using smaller turbo and/or supercharged engines, sometimes in conjunction with hybrid-electric systems. Today and tomorrow’s hypercars are hybrid, full-electric, or hydrogen-powered. There is little that compares to a naturally aspirated V12 roaring down the road! 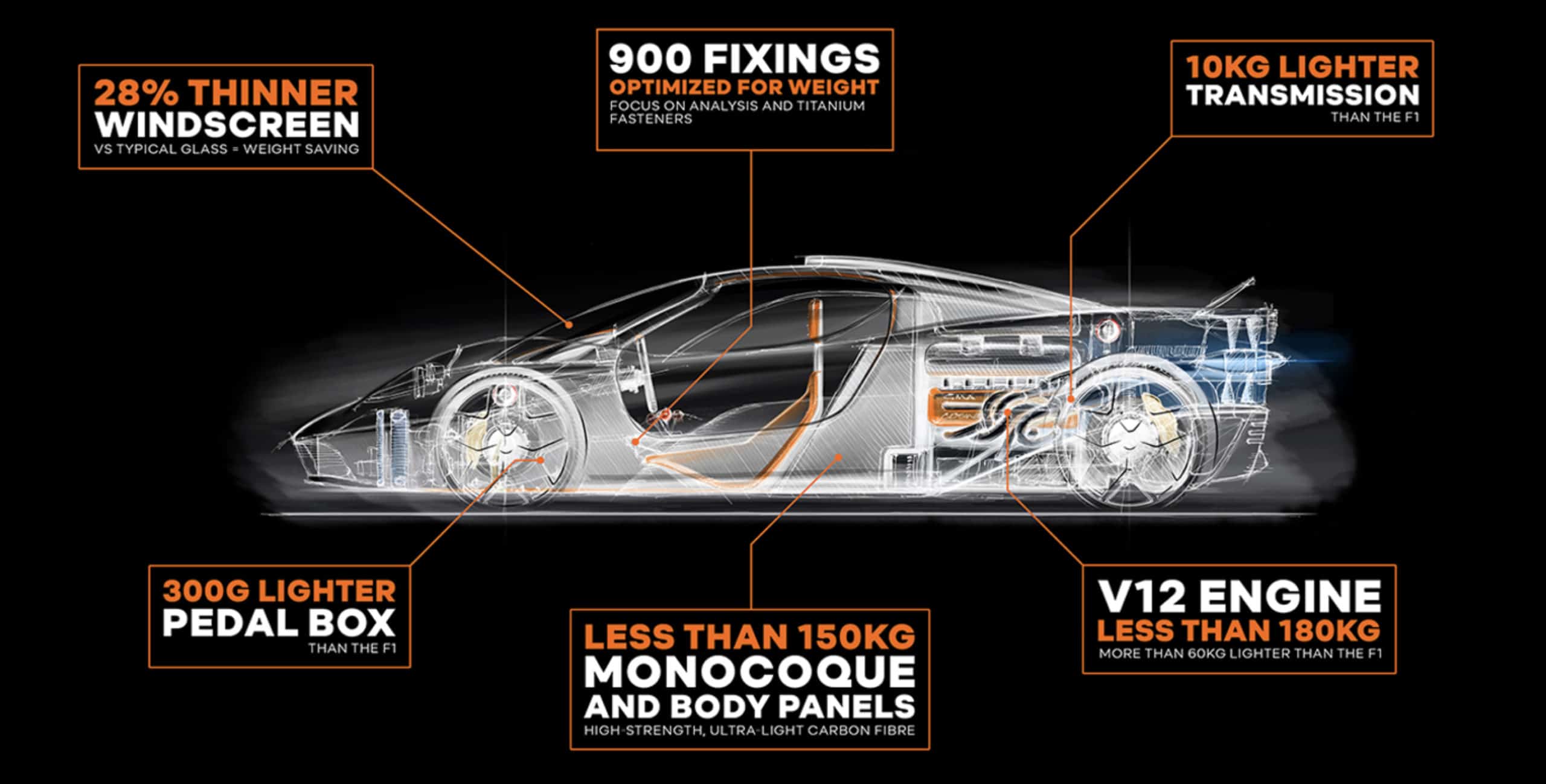 The Gordon Murry Automotive T.50 weighs an absolutely astonishingly low 2,174-pounds. Even the latest British lightweight supercar on the market today, the McLaren 765LT, weighs 2,963-pounds. In order for us mere automotive mortals to understand more clearly how light the T.50 really is, consider that the tiny Mazda Miata weighs in at over 2,300-pounds.

Many supercars today can get quite large, making them hard to maneuver around town or on your favorite twisty road. The T.50 has the “footprint of Porsche Boxer,” a perfect size to anywhere and easily hit every apex on your favorite tight mountain road. At only 3.8-feet tall, 6-feet wide, and 14.3-feet long the GMA T.50 is a very compact car. That diminutive size is part of the magic recipe to create this insanely light and nimble supercar. 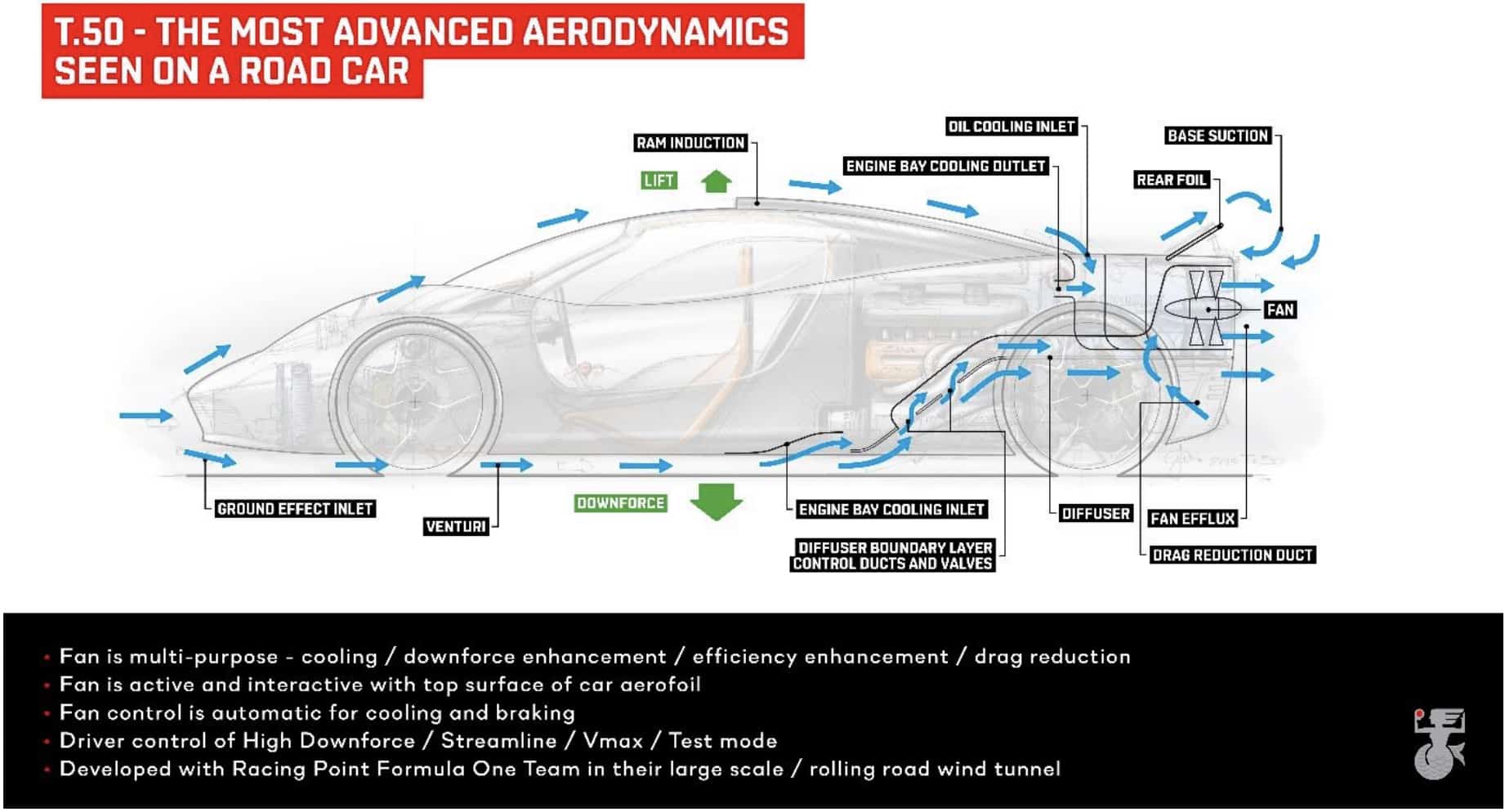 The design of the T.50 is of course very reminiscent of the McLaren F1, but it is also a much more streamlined modern version of that icon. A car with this type of performance envelope requires some seriously impressive aerodynamics to meet expectations. Murry has not only kept the top of the car extremely smooth and beautiful but also given the car an impressively unique signature feature. The thing that jumps out about this design is the rear-view with the huge fan exit centered on the car. This design is reminiscent of the 1946 Brabham BT46B Fan Car that Murry designed, and went on to win and be banned from Formula 1. On the T.50 the feature is a working “fan interactive aero system (FIAS).” 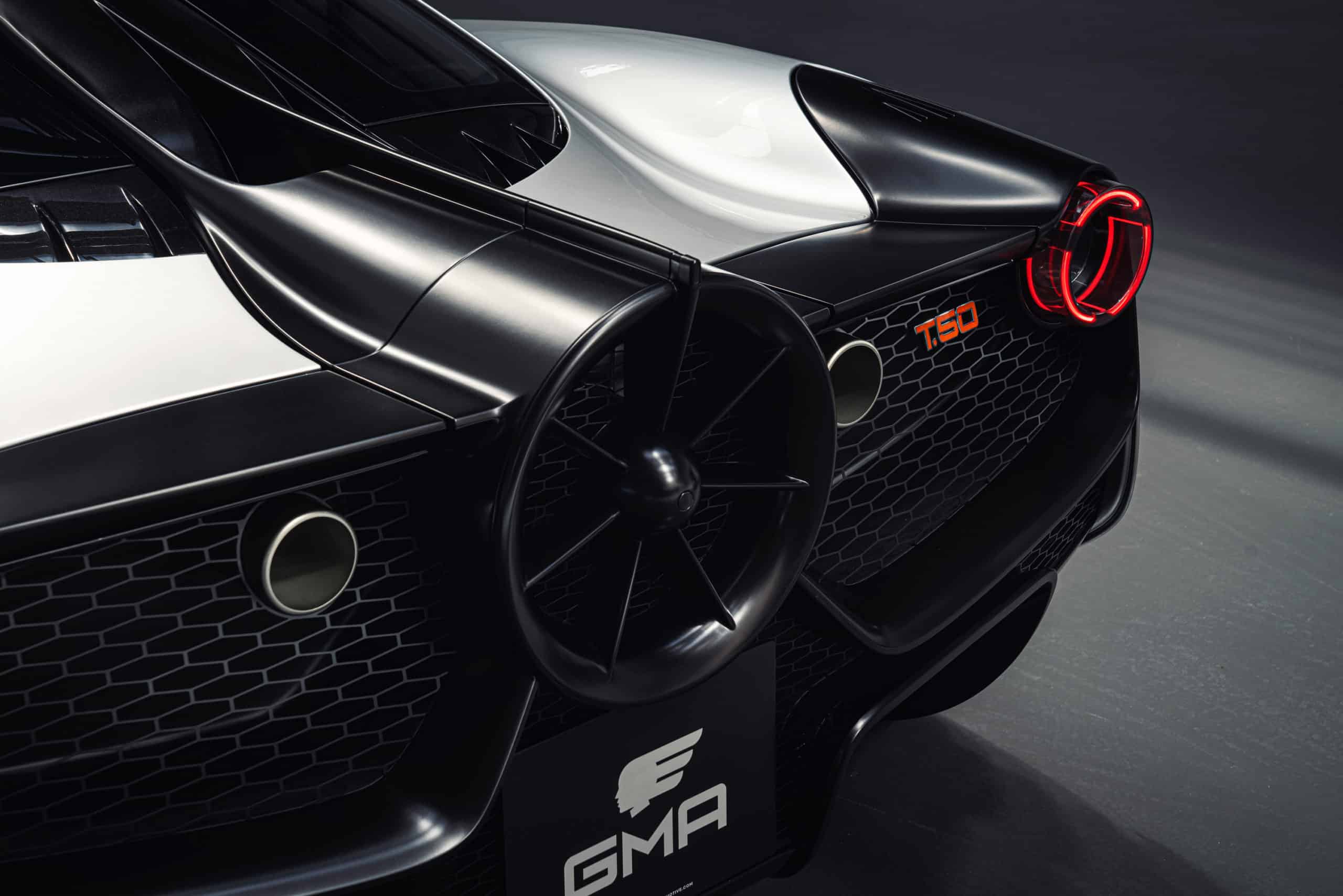 The FIAS allows the car to have a very clean upper surface without big wings or buttresses. There are a number of driver-selectable aero modes that control the FIAS. The T.50 gets Auto, Streamline, V Max Boost, High Downforce, and Test aero modes. The Streamline aero mode can dump up to 12-percent of downforce to create a longtail like design that should allow for incredibly fast top speeds.

Braking Mode is an automatic mode that deploys the rear aerofoils and at the same time runs the fan at high speeds. This combination can double the downforce of the car, improving grip and stability under hard braking. The Braking Mode allows the T.50 to stop a full 32.8-feet shorter when stopping from 150 mph. 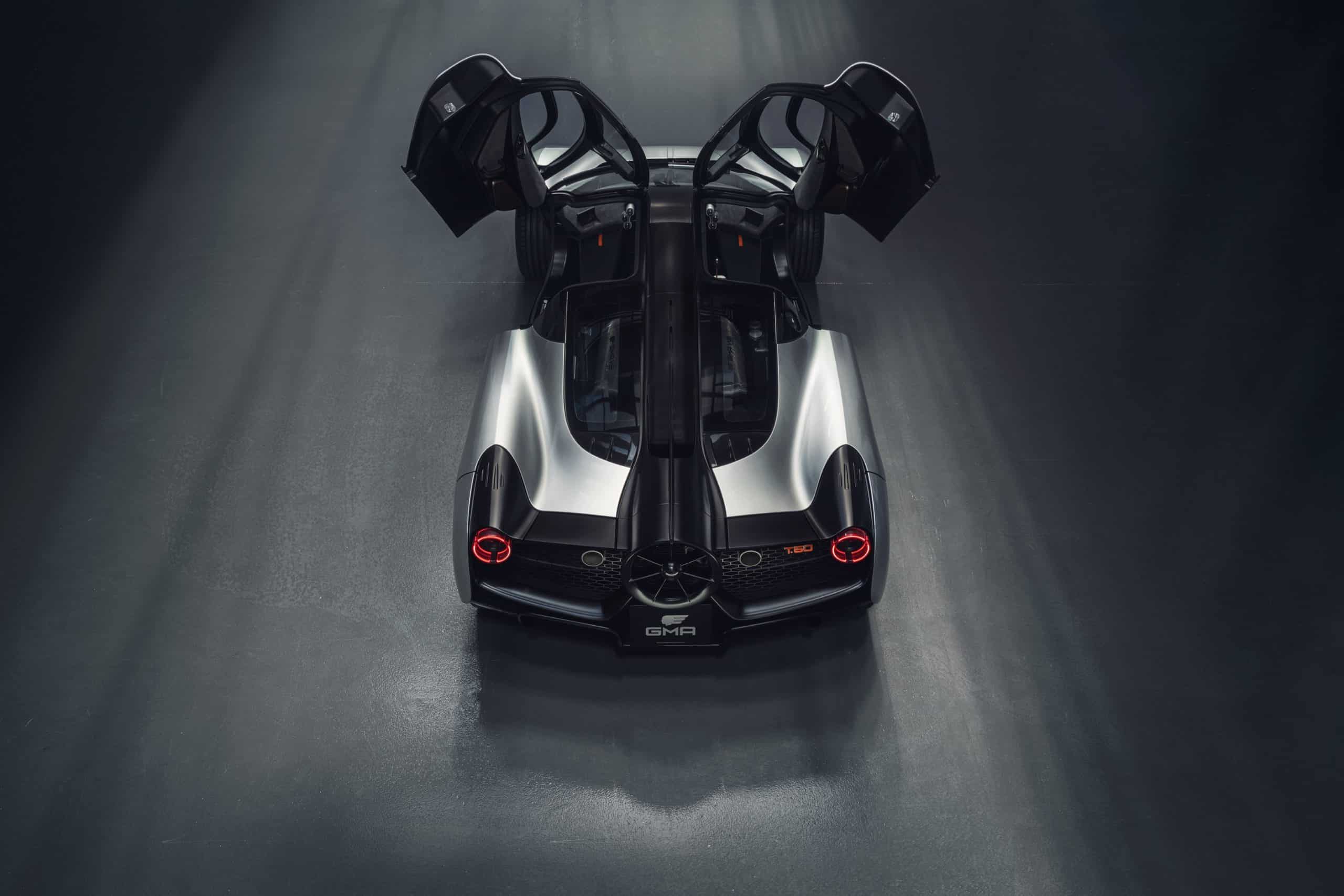 The one really notable aero feature on the exterior of the T.50, besides the fan, is the ram induction roof scoop. Not only does this harken back to the racing versions of the McLaren F1, but it also sits just above the driver’s ears. This provides a truly unique natural V12 sound for the driver’s audio pleasure. 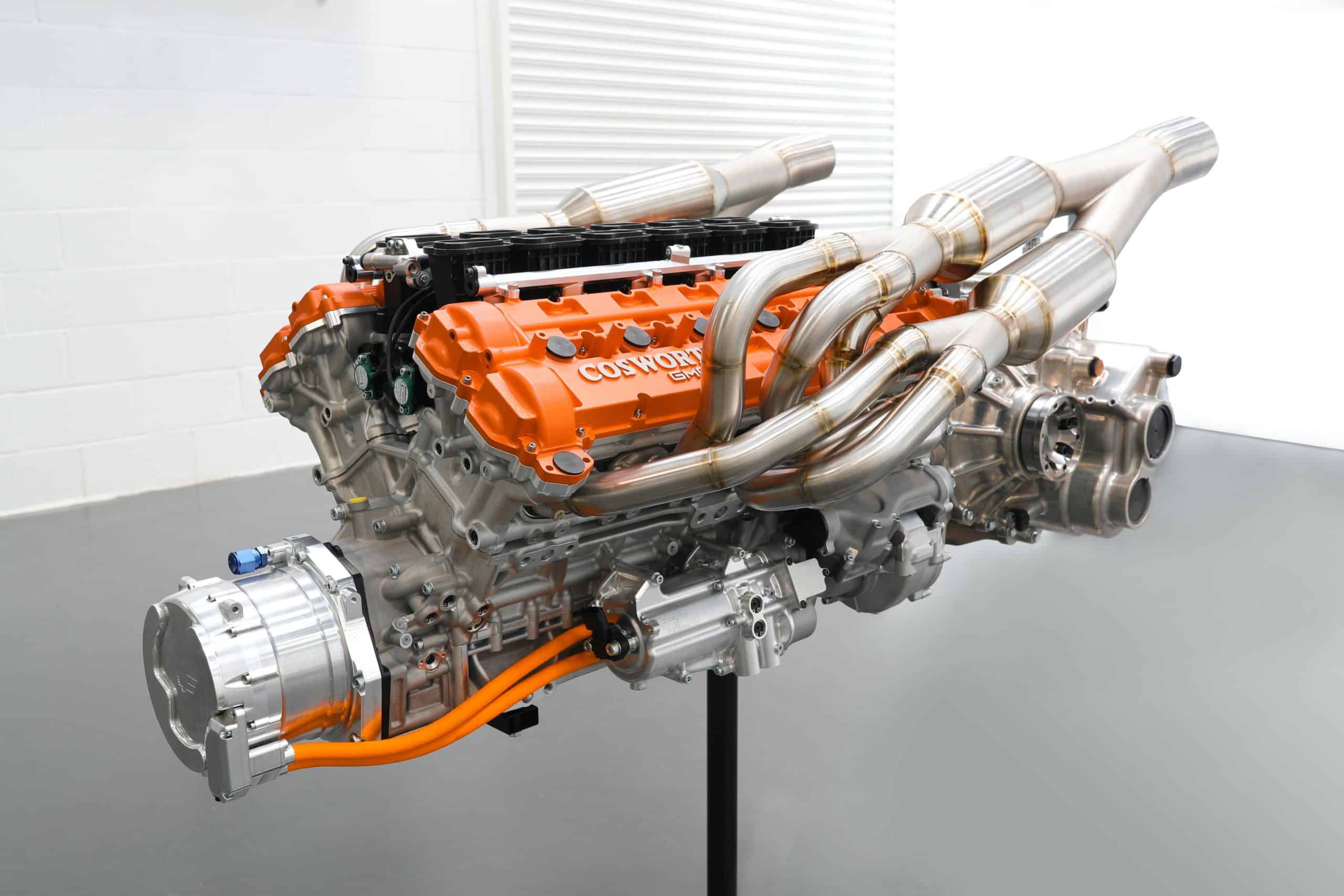 The beating heart of this supercar is a naturally aspirated 3.9-litre Cosworth V12. The 12,100 rpm redline will make the T.50 the highest revving road car engine ever. This bespoke V12 also achieves the highest horsepower per liter (166 hp/liter) and the highest power-to-weight ratio (663hp/ton) of any naturally-aspirated road-going car. If somehow those insane numbers aren’t enough, the Gordon Murray Automotive Cosworth V12 can also respond extremely fast to driver inputs, 28,400 revs per second fast. The Cosworth GMA V12 puts out 650-horsepower and 332 lb.-ft. of torque.

At only 392.4-pounds this very special Cosworth V12 continues the lightweight theme of the Gordon Murray Automotive T.50. To continue the beautiful design and impressive details of this car the engine cover actually has gullwing doors that allow you to show off the engine with the touch of a button. 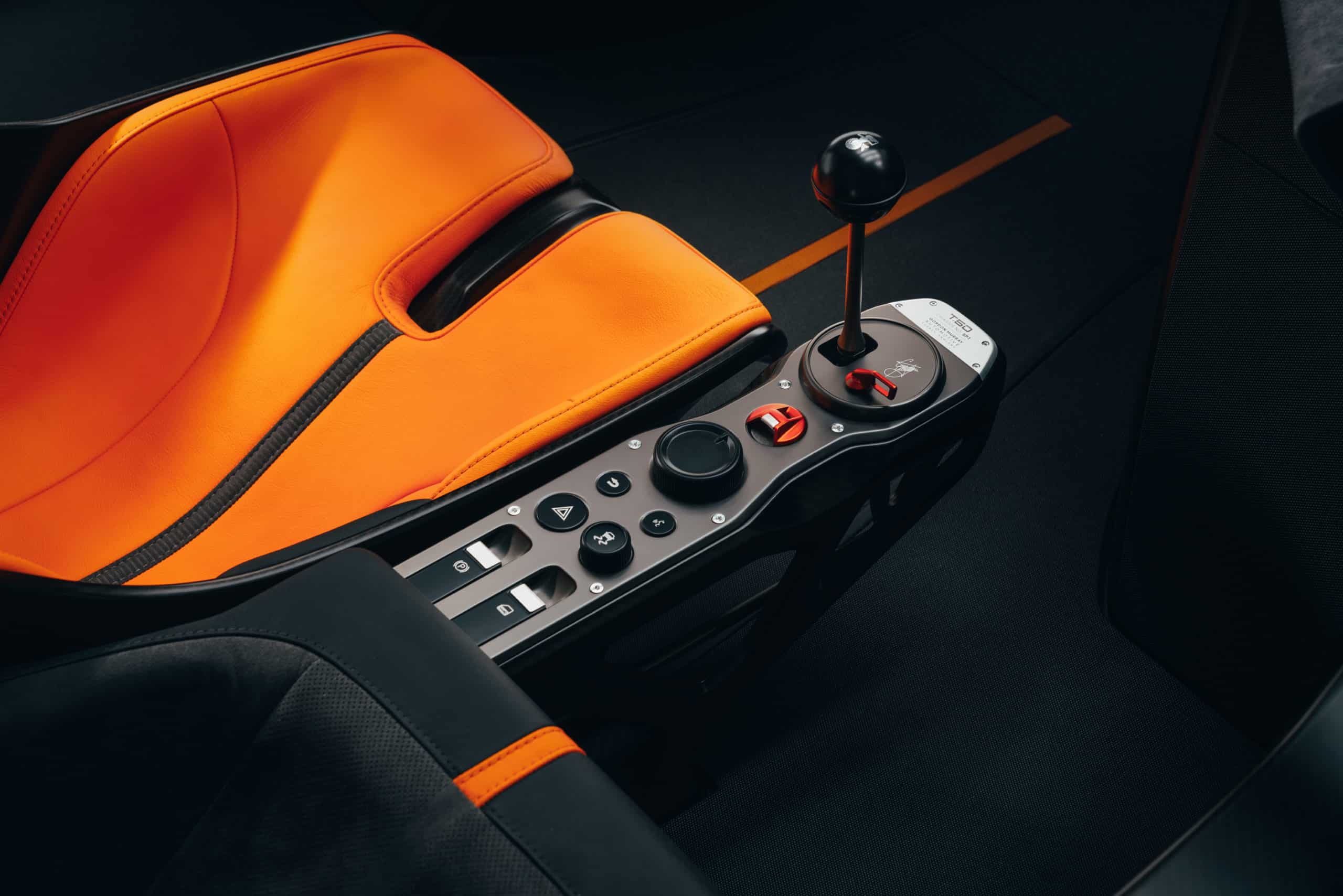 Backing that impressive V12 is the “lightest road car gearbox ever.” A specially designed bespoke Xtrac six-speed transmission is not only designed to perform, handle the engine’s high power and revs, but also to be ultra-lightweight, at only 177.5-pounds.

This is not a double-clutch or paddle-shift or anything more than the pinnacle of the manual transmission. You get a 6-speed H-pattern stick shift and a clutch pedal. As a true driver-focused sports car should have. 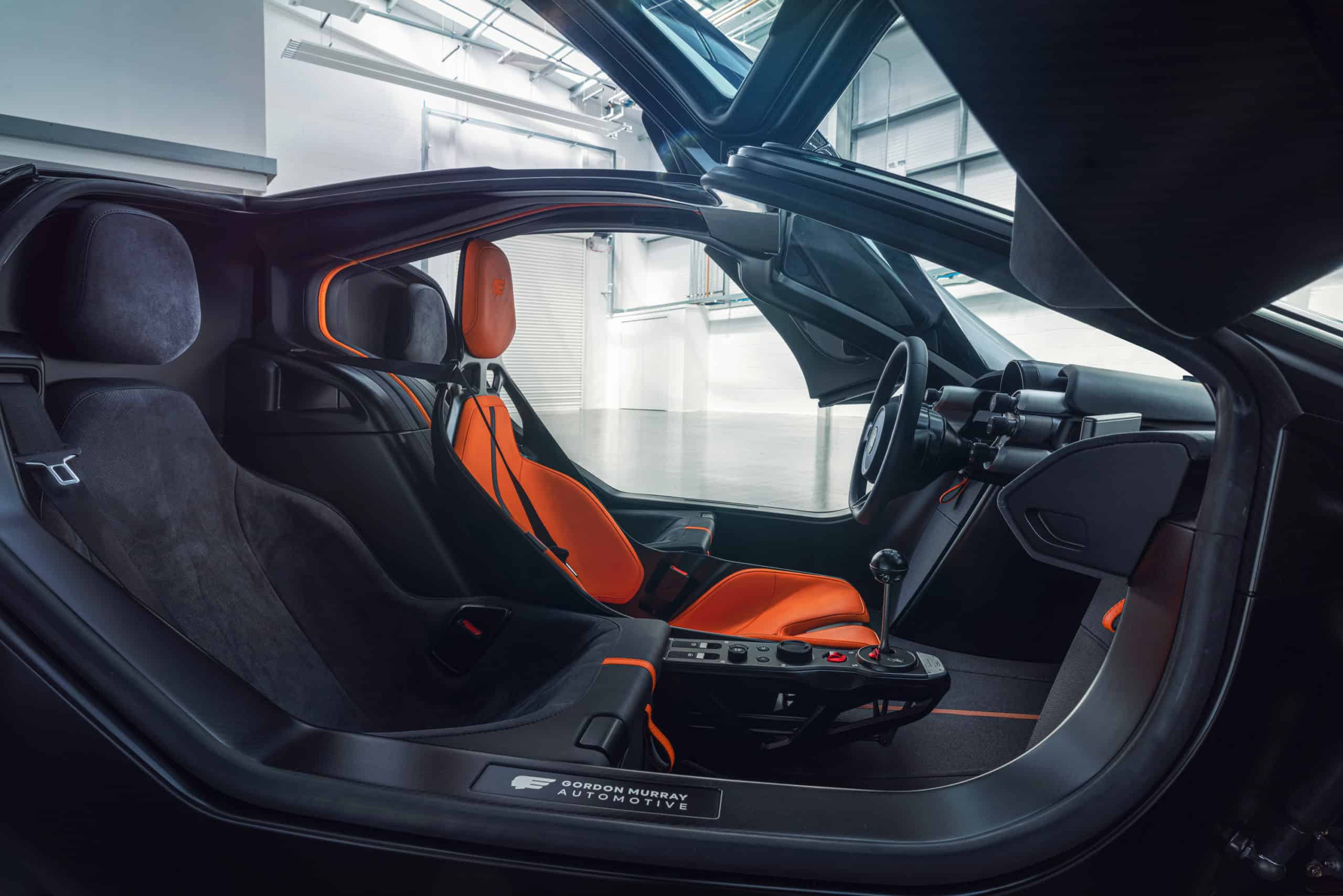 There is So Much Packed Into The T.50

This would be the longest story ever if I included all the amazing details of the Gordon Murry Automotive T.50 supercar. Every single detail has been thought-out, lightened, and optimized. I do think a few more details are worth a mention here, however.

The T.50 has Michelin Pilot Sport 4 S tires, 235/35R19 out front and 295/30R20 in the rear. Brembo carbon-ceramic disc brakes, 370 mm with 6-piston calipers up front and 340 mm with 4-piston calipers out back. That much rubber and those big brakes no doubt stop this super light car in an extreme hurry.

A full bespoke 700 watt 10-speaker audio system by Arcam plays your favorite tunes, if for some reason you ever get tired of listening to that V12 growl. The Arcam audio system even has Android Auto and Apple Car Play functionality. The really insane part again leads back to weight savings. The entire sound system only weighs 8.6 pounds! 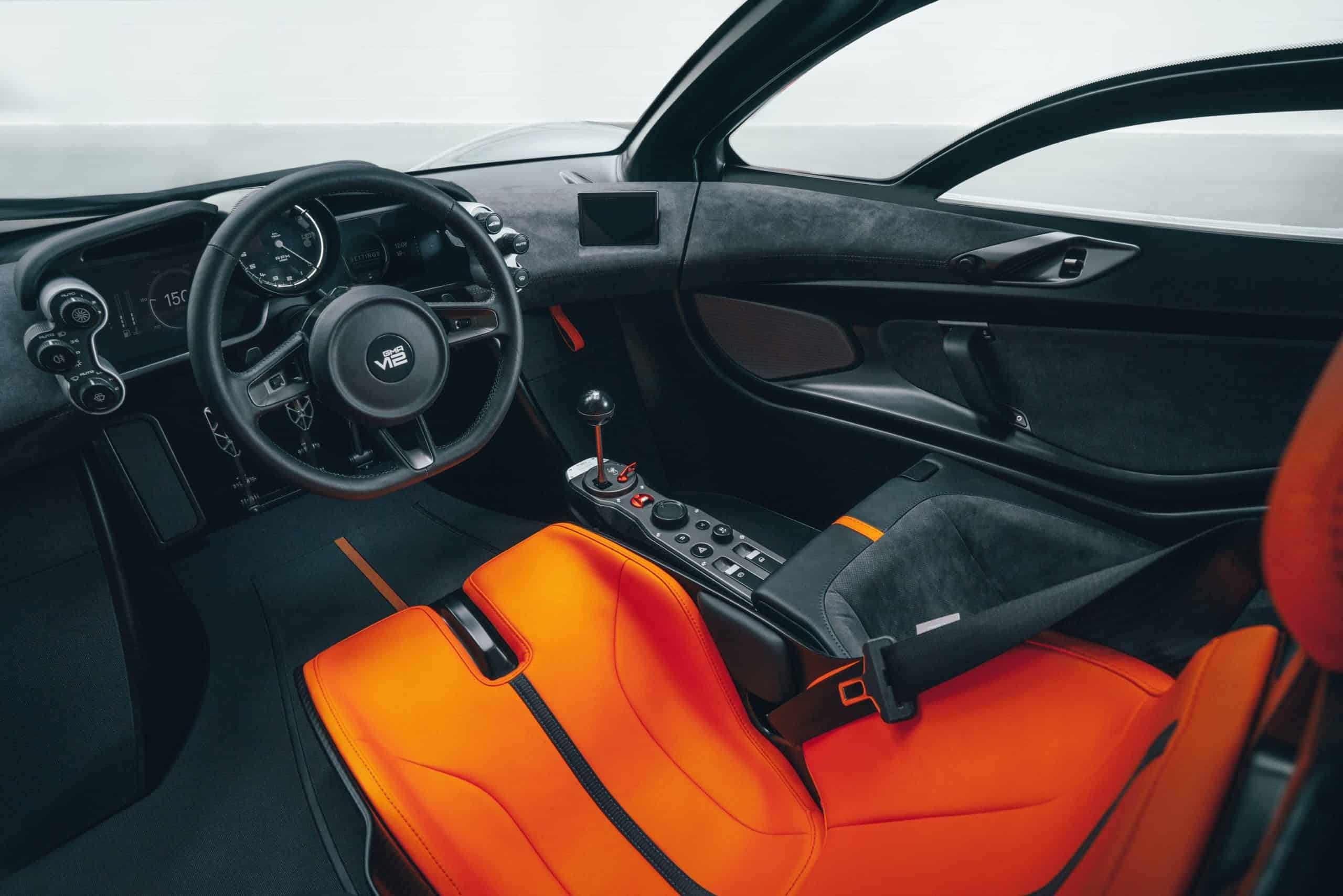 As this car is all about the driver, the gauges and digital displays are very driver-focused. You get a central floodlit tach, with a digital screen on each side. The left screen has vehicle information, while the right is the infotainment screen. 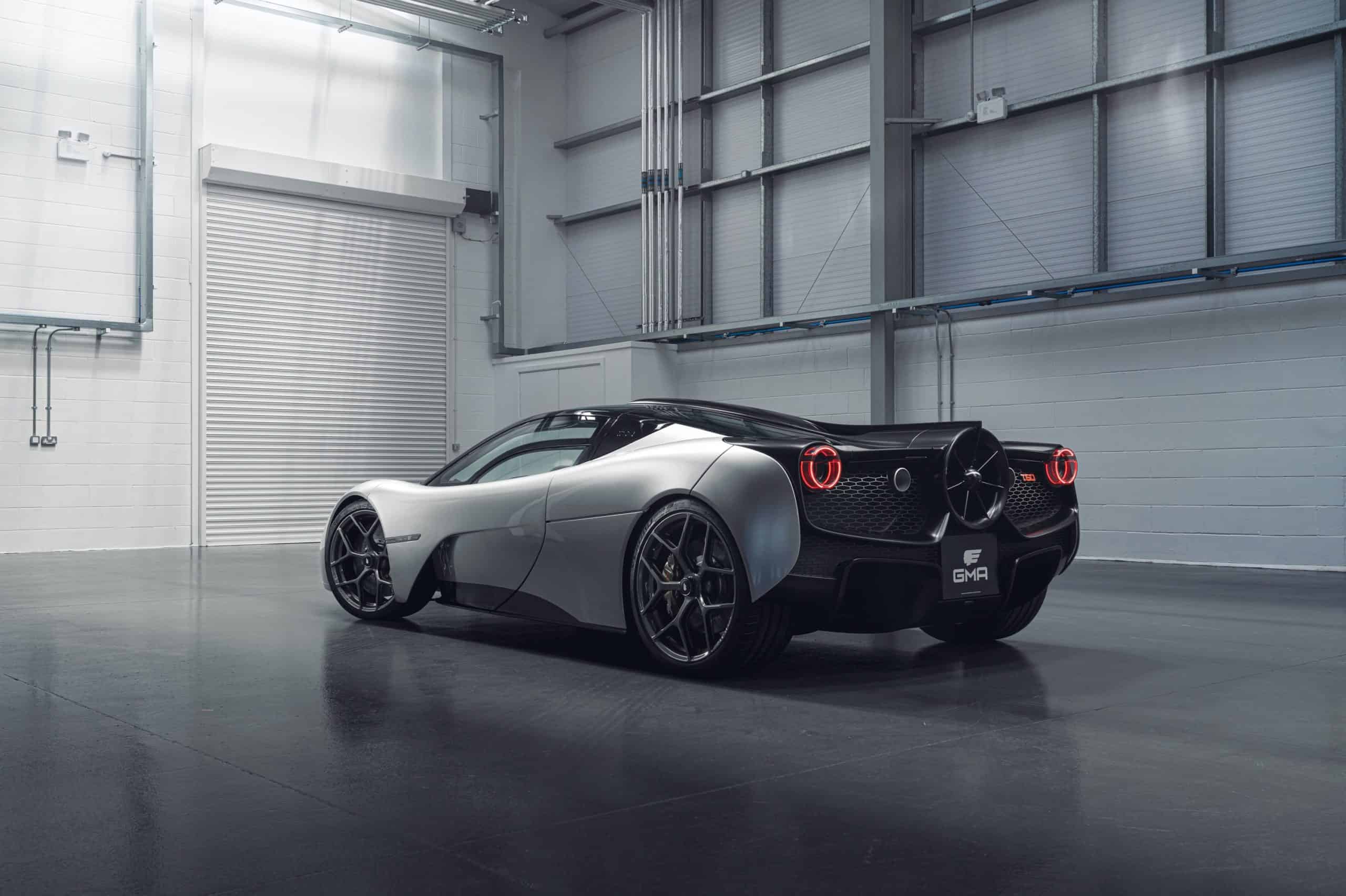 If for some reason you have $3.6+ million lying around and buy one of these cars, and are worried about finding service, fret not. There will be a Gordon Murray Automotive service network in the UK, US, Japan, and Abu Dhabi. If you have a T.50 outside of those areas, there is a “flying technician” service to support your GMA T.50. Here in the US sales and support will be provided by the Canepa Group. 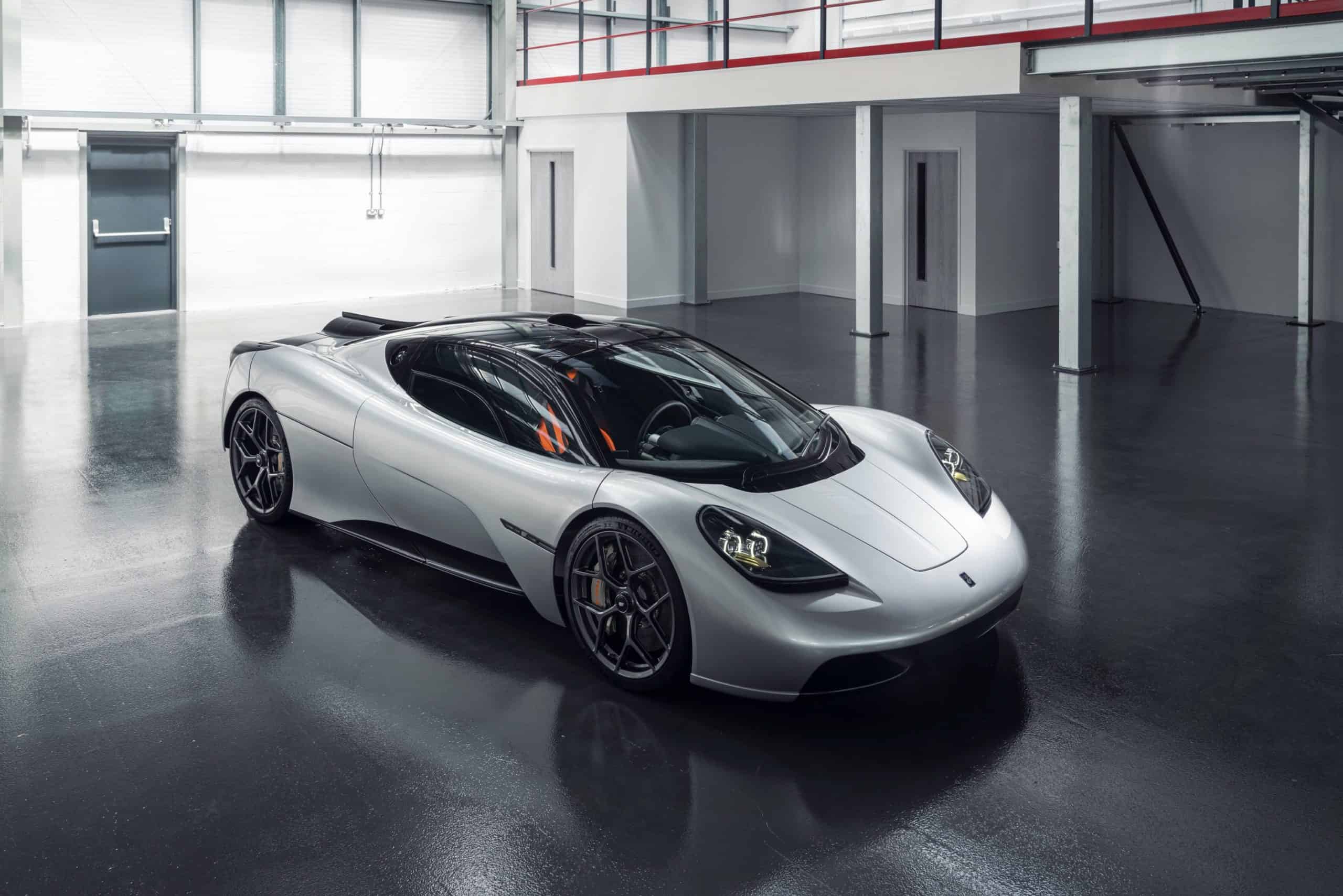 To drool on all that is the Gordon Murry Automotive T.50 even more be sure to check out GordonMurryAutomotive.com.


The Best of 2021 Cadillac
A Cool $5.7-Million Will Buy You The DB5 Vantage Icons Colle...
Dodge Now Offers a 710 HP+ SRT Hellcat Version of Every Mode...
What You Need to Know About The 2022 Ford Bronco Raptor
European Union Proposes Aggressive Emissions Cuts by 2030
2013 Dodge Challenger SRT8 Supercharged