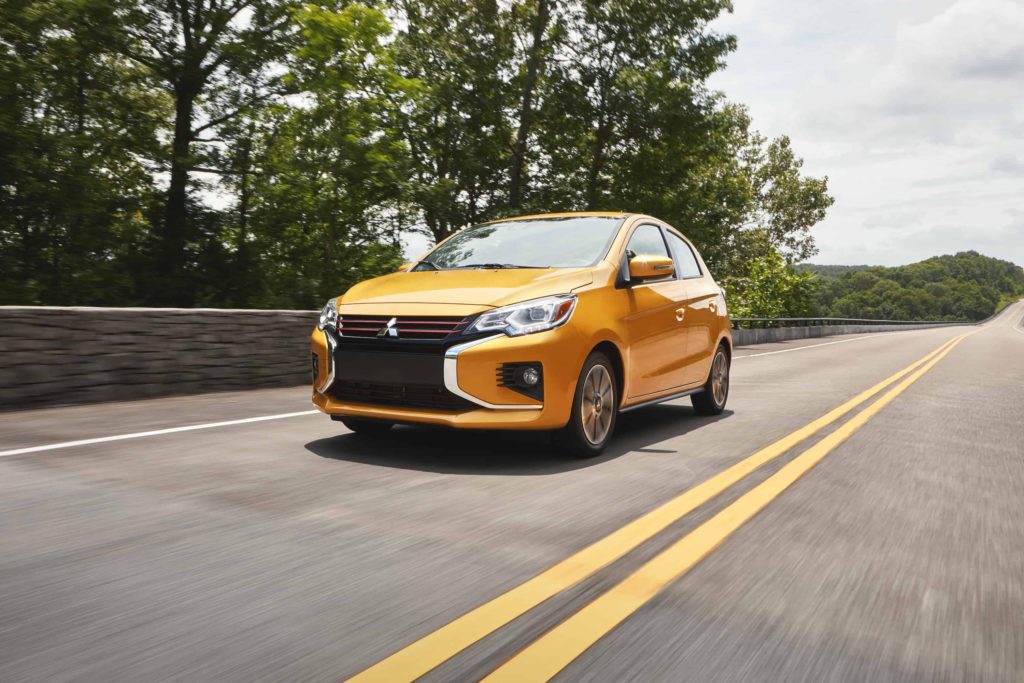 The Mitsubishi brand has had a tough decade. They lost their alliance with Daimler. The Renault-Nissan machine absorbed Mitsubishi. Mitsubishi should be counting itself lucky just to be here. The COVID crisis and slumping car sales across the board in 2020 don’t help, either. With all that said, the 2021 Mitsubishi vehicle lineup never looked so strong!

What could’ve been a disaster for the brand seems to have become its strength. The Renault-Nissan Alliance has now grown to become the Renault-Nissan-Mitsubishi Alliance, with Mitsubishi becoming a key player in the trio. Global sales also suggest the Mitsubishi moniker isn’t going to fade away anytime soon. Additionally, the 2020 JD Power IQS top-rated brand from Japan will offer up substantial new vehicle investment for the North American market moving forward. This new resurgence into the U.S. starts in 2021—despite naysayers that speculated Mitsubishi was pulling out of the country.

Against all odds, the company has posted positive sales year upon year, even after the loss of the mighty Lancer sedan for the US market back in 2017. A year later, in 2018, the brand sold an impressive 118,074 vehicles in the United States, which was an exciting 13.9% improvement on the previous year—all without the Lancer bolstering sales. Through February of 2020 Mitsubishi recorded record growth for seven years in a row. The 2020 global pandemic impacted sales heavily. We expect Mitsubishi to bounce back to its positive growth after the pandemic subsides and new vehicles hit U.S. shores.

Between now and the end of the second half of 2021 Mitsubishi Motors North America will introduce three significantly updated vehicles. They will also showcase one all-new, ground-up redesign: the next-generation Outlander. Additionally, Mitsubishi didn’t stop there. They also added standard features and extra value across each model. This includes standard active safety features.

In late 2020, Mitsubishi will begin its 2021 offerings with a revised version of the world’s best-selling PHEV (Plug-in Hybrid Electric Vehicle): the Outlander PHEV2. Broad changes and trim updates are also coming to the Mirage (the highest fuel-efficiency non-hybrid passenger car in the US). In early 2021 we’ll also see a refined and updated Eclipse Cross as well as the highly anticipated all-new next-generation Outlander.

The Mitsubishi Mirage and Mirage G4 sub-compact cars will go on sale first quarter of 2021. The pair received major exterior styling updates and added more standard safety equipment. This makes the three-cylinder commuter Mirage an even better value than it already is. The Mirage G4 sedan is the best fuel-sipping 4-door in its class. The standard Mirage hatchback 5-door variant matches the same mark.

The popular eye-catching CUV will incorporate major front and rear design improvements. This redesign hints at Mitsubishi’s next-generation styling. In addition to the Eclipse Cross’s new look, an updated interior and new infotainment system will be offered.

The newly redesigned Eclipse Cross will be featured as a 2022 model and will go on sale in Q1 2021.

This one is 100% happening. The 2022 all-new Outlander will go on sale Q2, 2021. The next-generation Outlander will be larger and more striking. It will be the quietest and most-equipped Mitsubishi ever sold in the U.S. Totally redesigned, the new Outlander will house Mitsubishi’s latest styling. The Outlander will showcase a daring and distinguishing look. Interior refinements are also added.

More information is expected during the global launch of the Outlander. It’s currently rumored to be held in early 2021.

The venerable Outlander was available in the US market since 2014. It’s in need of a serious update. Since then, Mitsubishi joined the Renault-Nissan Alliance. New Mitsubishi vehicles are expected to have a degree of either Nissan or Renault DNA woven into the mix. The Outlander test mule was spotted testing in the Midwest recently. We have a good idea of what it’s all about, despite the trippy camouflage. 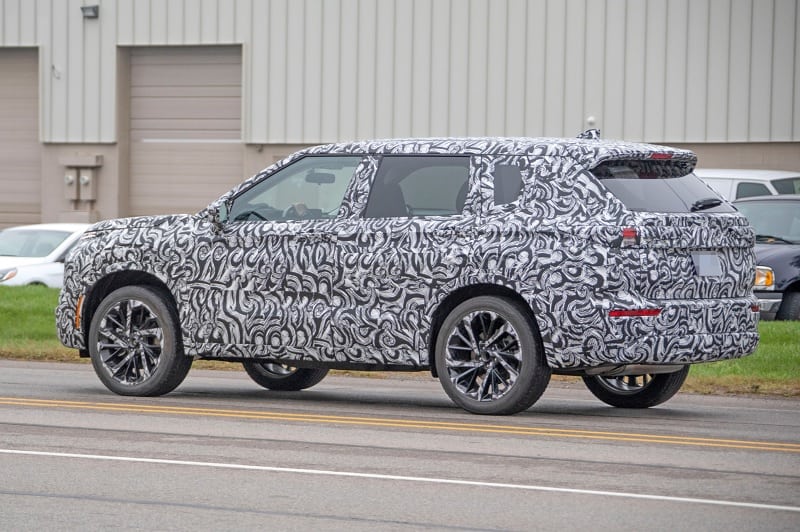 Underneath the camouflage, we guess the next-generation Outlander will have a striking similarity to the latest Nissan Rogue. The details of the bodywork may be different, but the overall architecture and floorplan may be identical. This is no bad thing—the Rogue is one of Nissan’s best-loved (if not bland) vehicles. As Mitsubishi now confirmed, the all-new Outlander will be bigger, putting it in Hyundai Santa Fe territory. 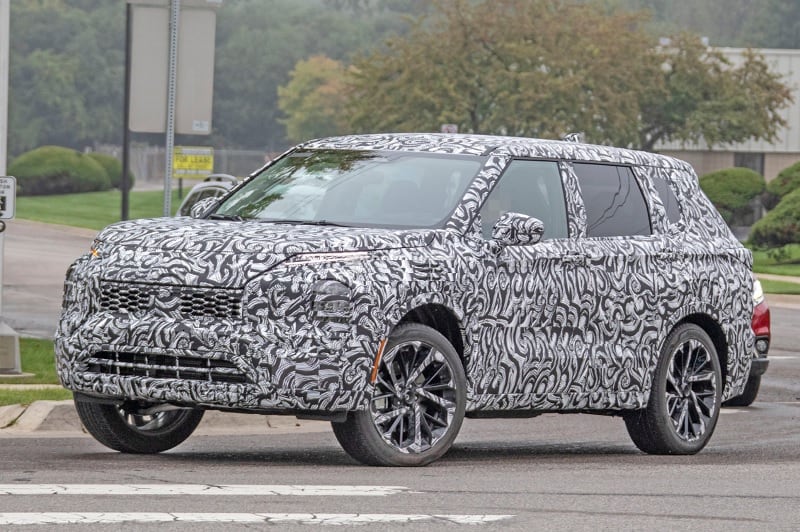 In terms of actual styling, we have to use a bit of imagination. However, Mitsubishi showcased their innovative Engelberg Tourer concept in 2019. It’s highly likely that the new Outlander and the Engelberg Tourer will have very similar styling cues. The Outlander may feature a blunt front end, similarly located vents, and similar lighting. Even the rear has a number of close similarities with the concept, from the rear passenger windows to the lighting elements.

The powertrain is the biggest mystery. Some theorists speculate the possibility of a 1.5-liter turbo four-cylinder unit you’d find in the Mitsubishi Eclipse Cross. That little turbo-four is good for 153 hp in Eclipse form. But, it may have more power if inserted into the new Outlander. There also could be a hybrid option, with a 2.4-liter four-cylinder and electric motors, offering AWD potential. Or, Mitsubishi could borrow powertrain technology directly from Nissan. 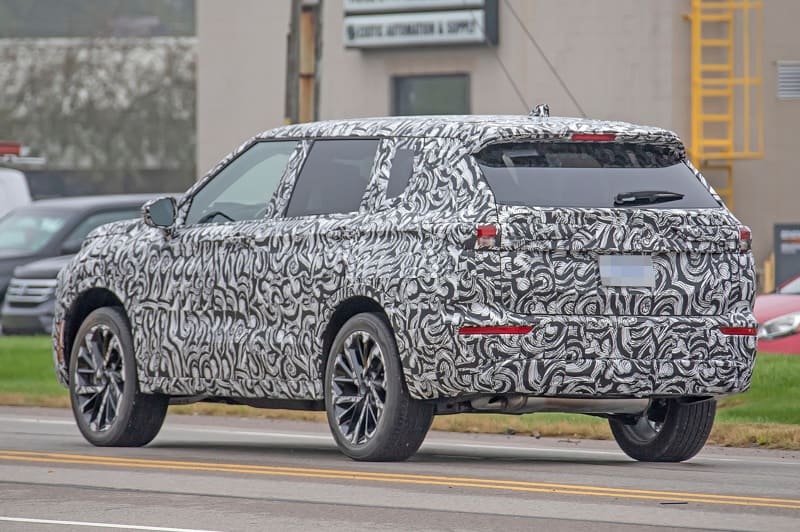 Mitsubishi’s North American product manager said: “the next-generation Outlander will be kind of the first ideas of implementing and using common platforms and sharing technologies.” This suggests a Nissan motor might not be out of the question.

As Mitsubishi evolves and takes a stronger hold in North America, it’s concept vehicles as it looks to its future will continue to turn heads. From the iconic Mitsubishi Lancer Evolution to another Mitsubishi pickup truck or even sport utility truck, Mitsubishi continues in North America. Mitsubishi never seems to stop re-imagining its bright future, we look forward to what they bring to our shores next.

Heralding the end of an era, the Final Edition appeared in 2015. But, the car industry has been rife with rumors about a triumphant return of the legendary Mitsubishi Lancer Evolution. Mitsubishi has always been adamant the Lancer Evolution won’t be returning. Or stated if the name did return it would be in a different form, like a SUV or sporty crossover. A new sedan with rally racing potential was simply not going to be an option. Or so Mitsubishi said.

Autocar suggests that Mitsubishi may be changing its mind. Details from unnamed sources suggest that a new Lancer Evolution sedan model is very much on the way. The same unnamed sources explain the eleventh generation Lancer will feature an Evolution model. They share the same technology and powertrain as the Renault Megane RS. Not the current little hatchback though—the new version that’s currently ranked as the fastest front-wheel production car to fly around the Nürburgring.

The RS Trophy and Trophy-R are high-powered machines. Under the hood, they feature a fierce 1.8-liter turbocharged four-cylinder engine generating 296 horsepower and 295 lb-ft of torque. If the new Mitsubishi is similar, we’re looking at a very sporty next-generation Lancer Evolution. There’s also talk of a Renault-Nissan-Mitsubishi in the form of a newly developed mild-hybrid powertrain. This could include a larger 2.0-liter engine to boost the output to 341 horsepower and 319 lb-ft of torque.

Mitsubishi’s Osamu Masuo would like to revive the Lancer Evolution. The chairman wants the Mitsubishi name to return to the top as a performance car. After a few disastrous years in the 2010s, and now with Nissan’s backing, the time for a new Lancer Evolution seems ripe.

The new Lancer Evo is expected to arrive in four-door sedan and five-door hatchback configurations. It could also be built atop of the Renault-Mitsubishi-Nissan CMF-C/D F4 architecture. Unfortunately, there’s no word on when (or even if) a new Lancer Evo is on the way. If it truly is on the cards, expect an announcement or even a concept model to make an appearance sometime in 2021. If the car comes to life, the even bigger question is if we’ll see them on U.S. soil.

A quick internet search for “2021 Mitsubishi” will give you a mixture of results. You’ll get information about the new Outlander. Plus, Mitsubishi plans to build pickup trucks for the North American market. The last Mitsubishi pickup we had in the USA was the 2005 to 2009 Mitsubishi Raider…also known as the Dodge Dakota. After that, Mitsubishi turned its back on the pickup market but now it looks like it’s making a serious effort to bring something to the segment.

Overseas, Mitsubishi has been working hard with their compact pickup truck idea: the Mitsubishi Triton. It’s a bold pickup that enjoys success in almost every market it retails in. The latest iteration—the 2018 model—just had a very nice refresh that’ll no doubt agree with longstanding Triton fans. It currently sells in about 150 countries, but the US isn’t one of them. Might we see a Mitsubishi Triton in the U.S. soon?

Mitsubishi’s Chief Operating Officer for North America, Mark Chaffin, told msn.com: “We would like to have (a pickup), but we’d have to have one that’s right for Mitsubishi, for our demographic, and something competitive in the market,” which suggests that the option is out there.

Reports have suggested that a Triton might appear on US soil in 2024, or possibly even sooner. Mitsubishi Triton could be built upon existing Renault and Nissan architecture. Essentially, a new Mitsubishi pickup would share DNA with the next-generation Nissan Frontier. And that’s probably not a bad thing.

If we’re getting a new Mitsubishi Triton in the USA sometime in the next few years, should we be expecting Nissan Frontier architecture with a hybrid option? That seems right. When will something like that arrive? Hard to say, but it’s unlikely before the 2023 model year. It is possible we’ll see a concept as early as 2021 though.

The Case For a Mitsubishi Pickup

Whatever Mitsubishi has lined up for the near future, the brand will need to work hard to capture American audiences. The brand has shown improvement over the last decade, with a large jump of 13.9% improvement between 2017 and 2018. But more needs to be done. Ever since the Mitsubishi-Daimler alliance disintegrated, Mitsubishi’s presence in the USA significantly diluted.

However, Mitsubishi has worked hard to grow their dealerships. They currently have approximately 350 dealer partners across the United States. With many dealers in rural areas of the U.S. a decent pickup truck would play an important part in strengthening Mitsubishi’s market presence in the U.S. market.

What About A Mitsubishi Sport Utility Truck?

There’s talk of SUVs and pickups trucks but what about a Sports Utility Truck (SUT)? The Mitsubishi Concept GR-HEV is an interesting concept from the brand that marries an SUV and a pickup truck and puts them into something else entirely. Could this be the missing link in a market Mitsubishi can capitalize on in North America?

It’s highly unlikely but Americans love SUVs and trucks. Rolling those two things into one could make for interesting sales. Take the best parts of the Triton and mix it with the everyday practicality with an SUV. Pepper it with premium details from a sedan, and you’ve just invented an entirely new segment.

The Mitsubishi Concept GR-HEV first debuted in 2013. However, a lot has happened in the car industry since then. Is it time for Mitsubishi to brush the dust off of this old concept and mold it into something for production? Don’t discount it. 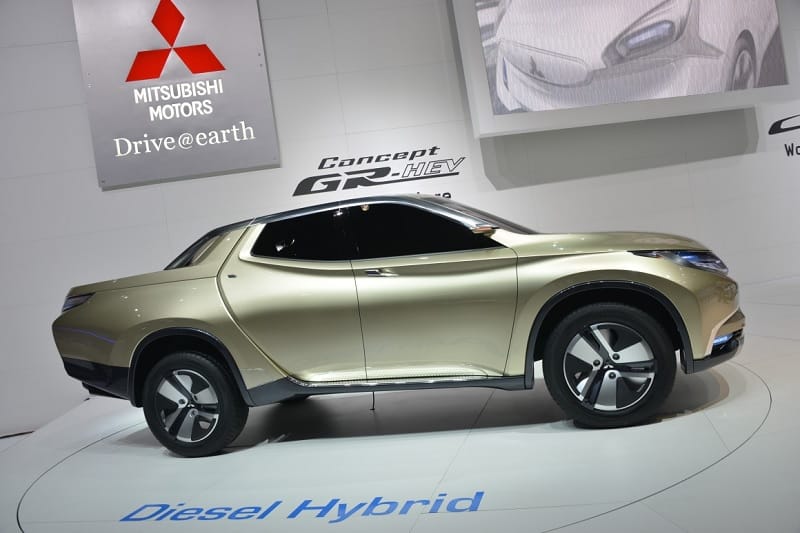 This thing is probably going to remain a concept. It would be very cool to see something like this on the road. It may happen, but it may not be for a few years, however. Mitsubishi needs more money to throw at the development of realistic new models. Mitsubishi needs to take some risks.