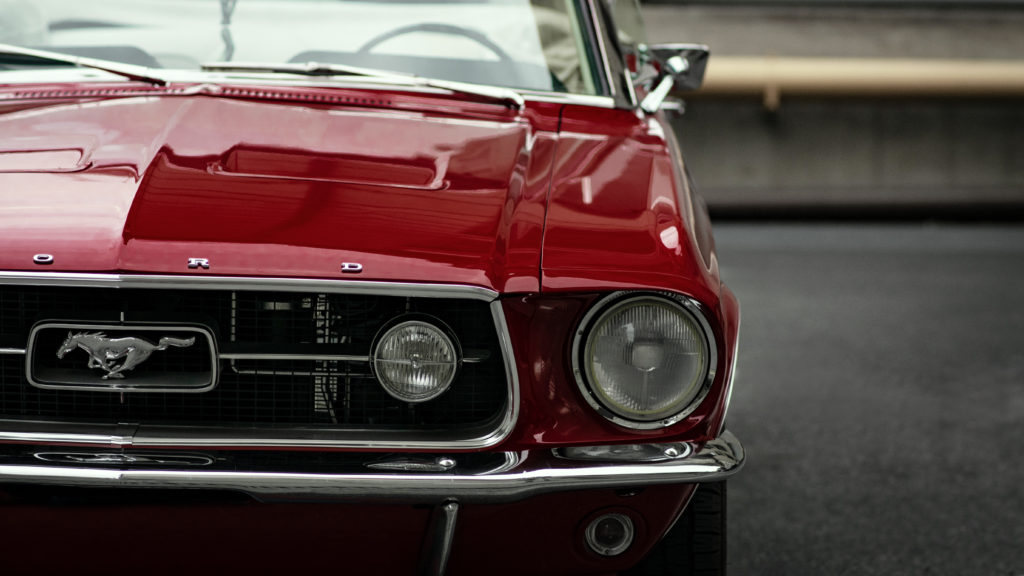 The Ford Mustang has evolved through 12 distinct eras over the past 30+ years. Here are the best Mustangs from each of those 12 eras  — plus a few fun facts about the original Ford Mustang.

The Best Mustangs From Each Era

While it’s generally recognized that there are five distinct generations of the Mustang, that measurement is too coarse to be able to select a single model as the best for each time period which is why we opted for a few extra eras to make sure we covered the best-of-the-best of this iconic Ford car. 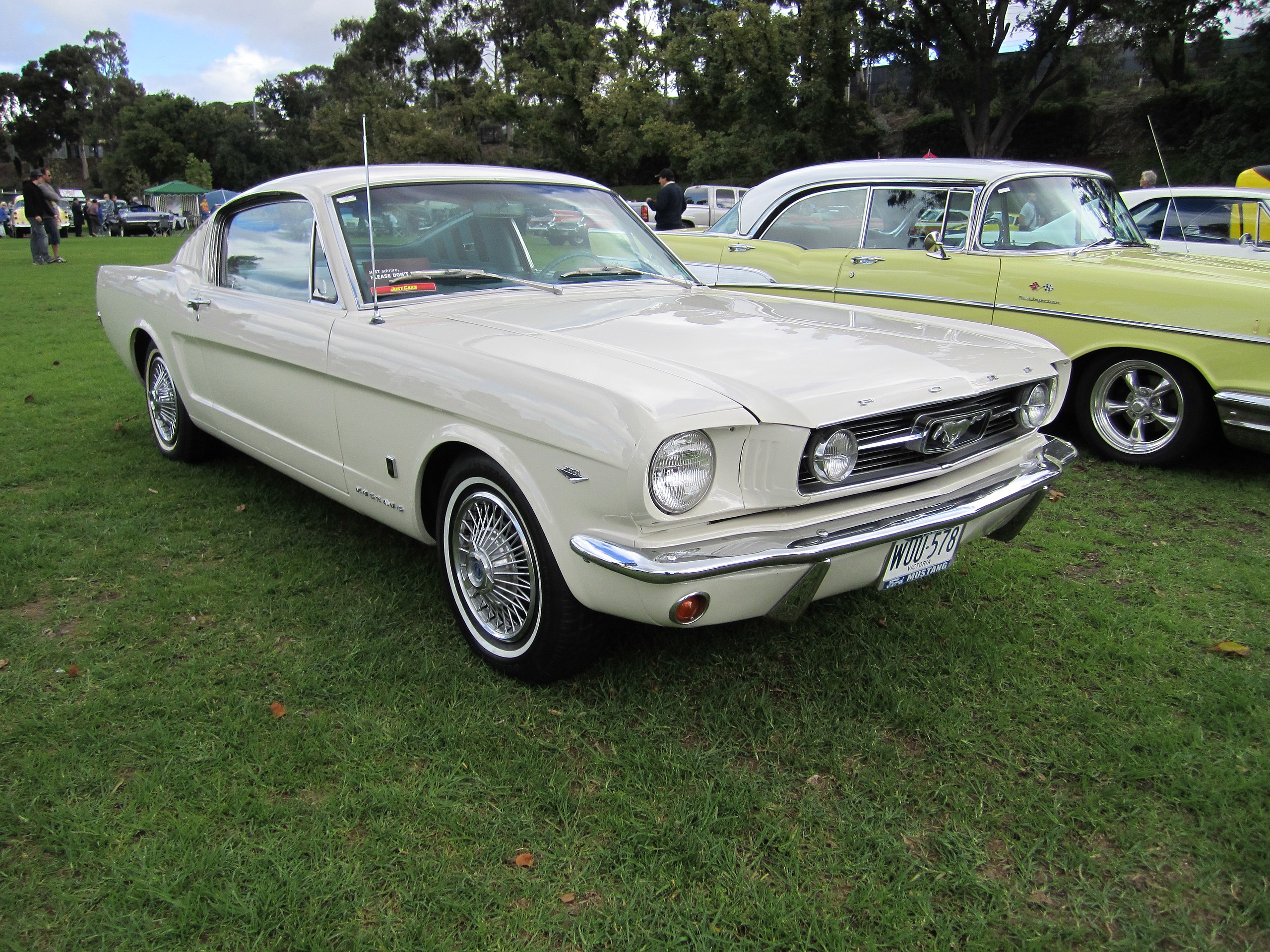 The selection from the first era is the Mustang Fastback GT. Introduced in 1966 as the “GT Equipment Package,” it included grille-mounted fog lamps, rocker panel stripes, and disc brakes. Inside, the GT option added a different instrument panel that included a speedometer, fuel gauge, temperature gauge, oil pressure gauge, and ammeter in five round dials.

The best engine option was the 4.7 L Windsor Hi-Po V8 with a 4-barrel carburetor and a solid lifter camshaft. This V8 producing 271 hp at a furious 6,000 rpm. The Mustang Fastback GT was a nimble car with decent power, but still very much limited by its Falcon underpinnings. But, surely, this is the ultimate ’60s Mustang? 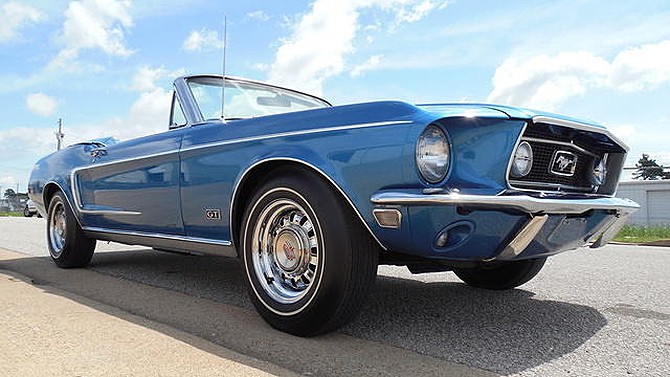 The top slot for Ford’s second era of the mustang goes to the 1968 Mustang GT convertible. With its more aggressive styling than the first-era Mustang convertible, it looked less like a Barbie car. For power, the aging 390 CID FE (Ford-Edsel) engine, which produced 325 hp at a leisurely 4,800 RPM, would be our pick of the best Mustangs of this era. 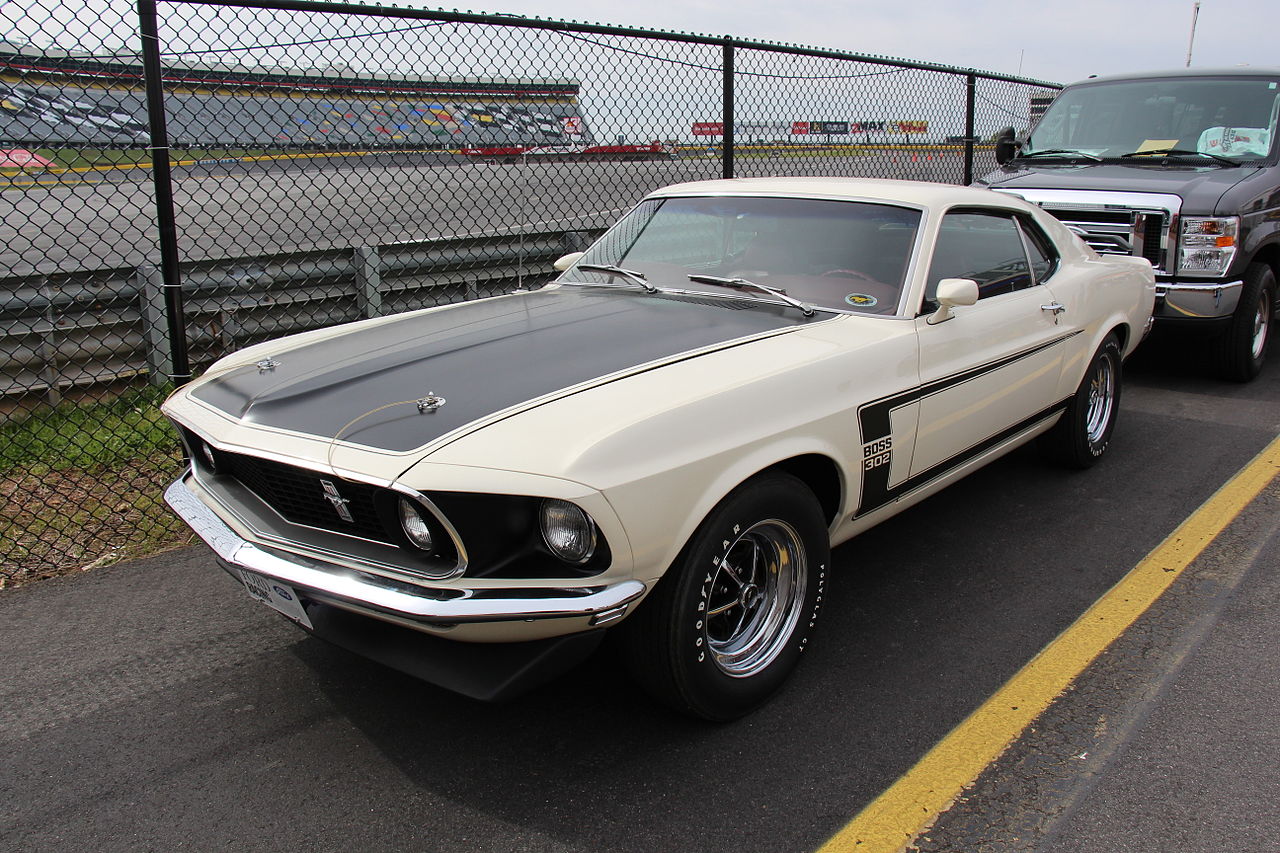 In the Mustang’s third era, there’s no doubt the car to have is the Boss 302, with a preference toward the 1969 model with Larry Shinoda’s subtle “C” decal design versus the 1970’s clumsy hockey stick decals. Both years carried the fabulous two-year-only Boss 302 motor, developed specifically to compete in the SCCA Trans-Am Championship against the Camaro, Firebird, Javelin, ‘Cuda, and Challenger. The Boss 302 was a Mustang designed to stop and turn as well as or better than it accelerated. 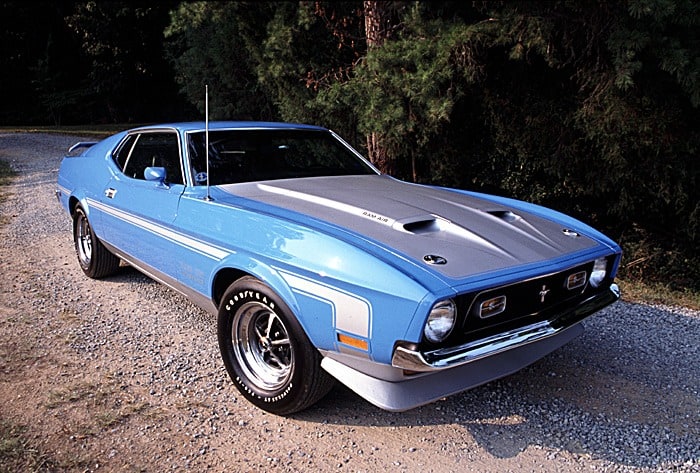 In its fourth era, the Mustang grew to what could most graciously be referred to as Grand Tourer rather than its earlier Sport Coupe proportions. Regardless of size, the ’70s Mustang Boss 351 carried one of Ford’s best motors ever — the 351 Cleveland R-Code. Rated at 330 hp, the R-Code was fitted with a 4-barrel carburetor, an aluminum intake manifold, solid lifters, dual-point distributor, a 6-quart oil pan, and cast aluminum valve covers. It had four-bolt main bearing caps and forged, shot-peened connecting rods. You were essentially getting one of the best Mustangs of its day with a race motor directly from the factory. 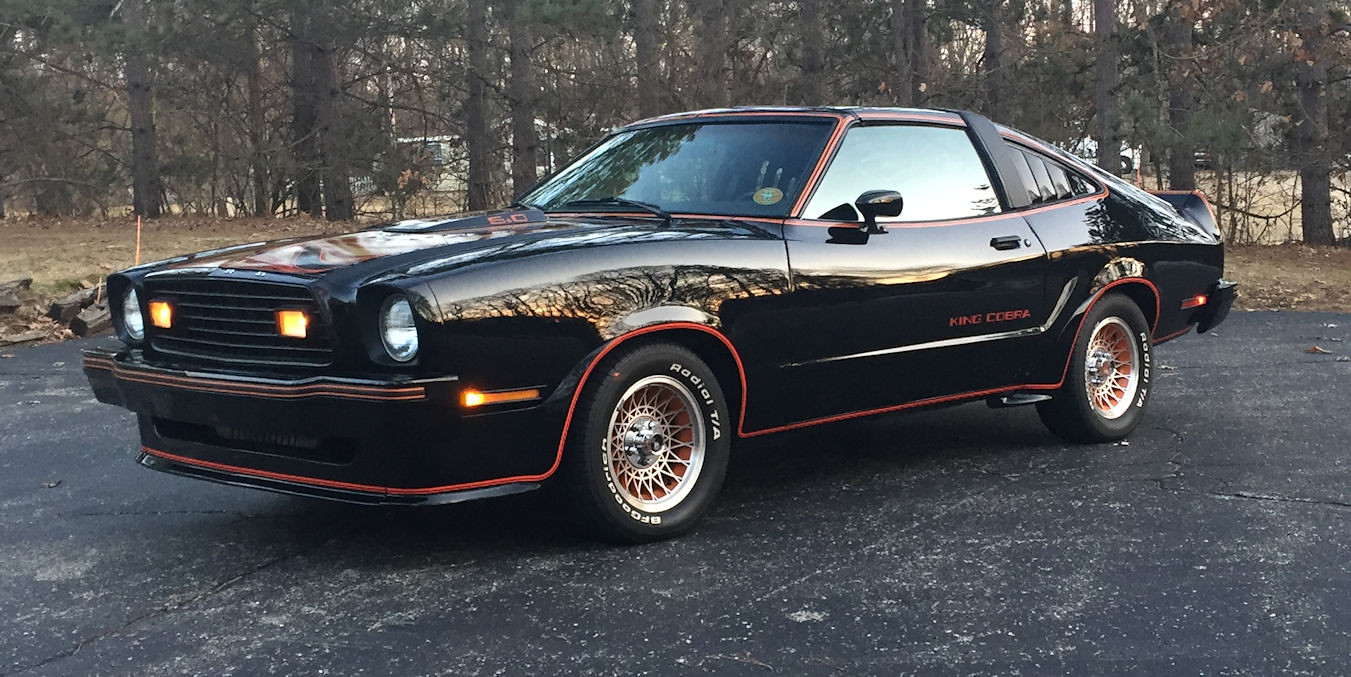 Say what you will about the Mustang II, but Ford sold a million of them. In fact, had the Mustang II not been downsized just prior to the days of fuel embargoes, climbing gas prices, emissions controls, and Corporate Average Fuel Economy, we may not have all the best Mustangs of today. The best bet of the Mustang II is the 1978 King Cobra, with the 302 CI V8, 4-speed manual transmission, an upgraded suspension with adjustable shocks, and a hood decal that can stand toe-to-toe with any Trans-Am. 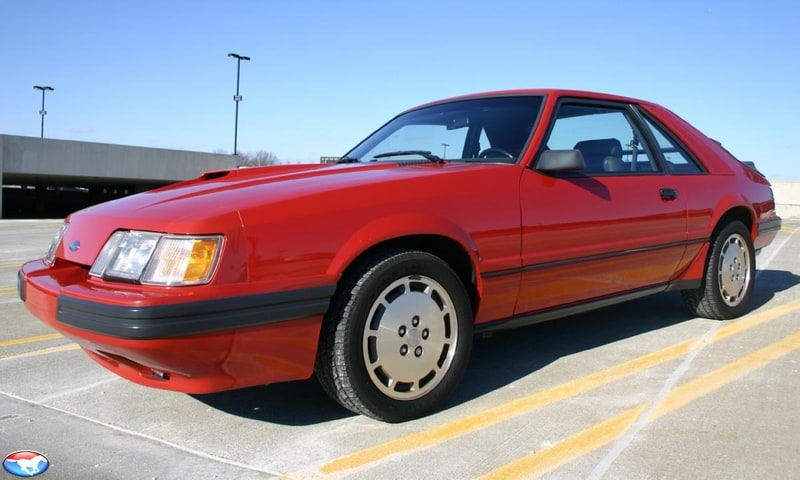 What’s the best ’80s Mustang? Probably this one. Ford took advantage of the newly-developed Fox platform of the Fairmont as the basis for the next generation of Mustang. Of this era, the real standout is the 205 hp 1985.5 SVO. The engine was a turbocharged version of the 2.3L 4-cylinder with advanced computer control for ignition and fuel delivery. The gearbox, suspension, and steering were all heavily upgraded, and the interior modified to make the SVO a true driver’s car and one of the best Mustangs of the ’80s. 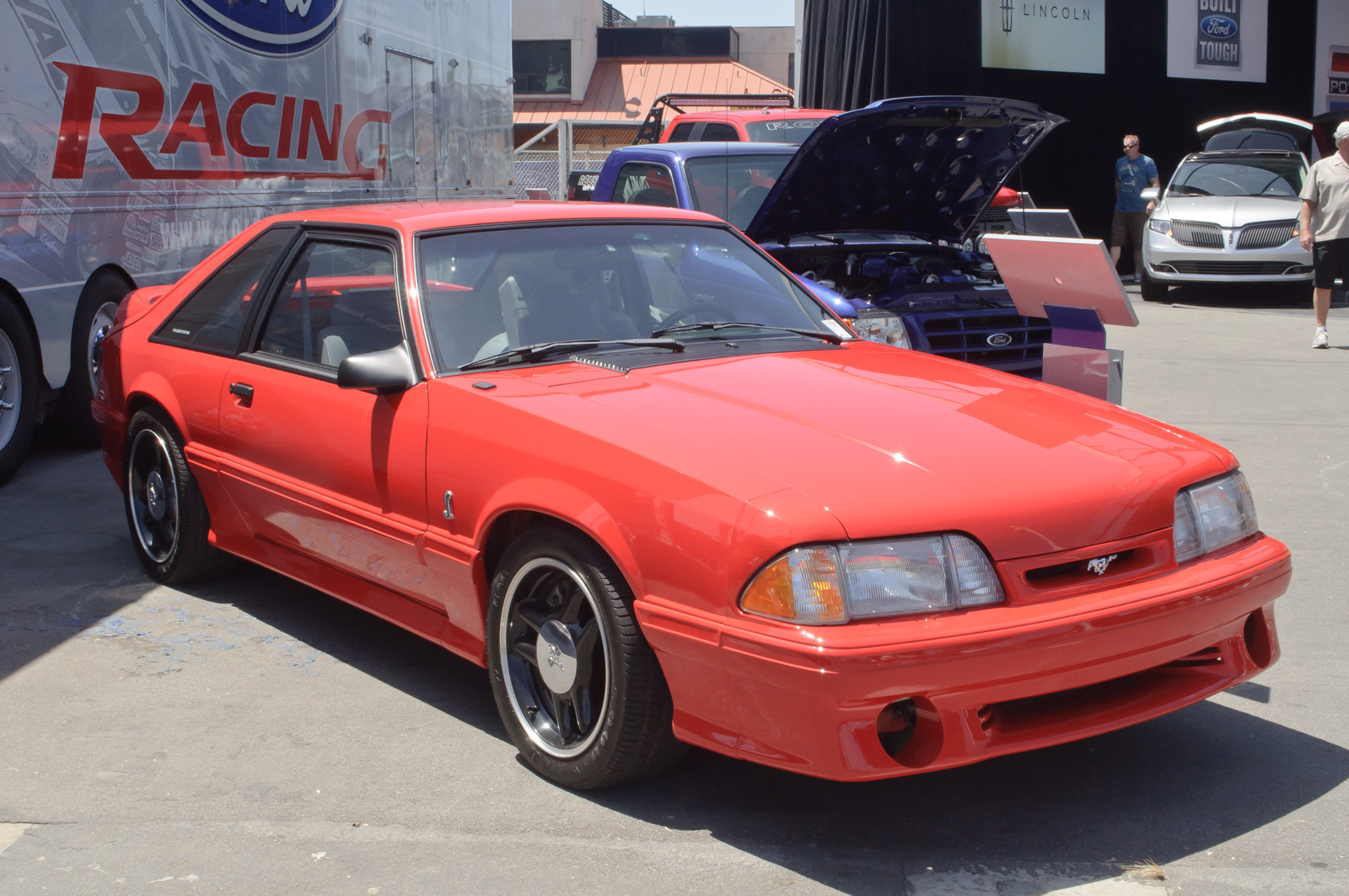 In the late ’80s and early ’90s, it was almost like the best Mustangs of the ’60s had returned. Ford offered 107 track-ready “R” versions of the 1993 Cobra, but only to buyers who held a current racing license. The Cobra R featured a 235 hp 5.0L engine, larger brakes, Koni shocks and struts, engine oil and power steering coolers, and a rear seat delete. As the Cobra R was race-oriented, A/C and a radio were not available. And while it didn’t come with a warranty, you could get it in any color you wanted — as long as it was Vibrant Red.

In 1996, Ford introduced a new aluminum 4.6L DOHC engine that produced 305 hp,  dropping 0–60 to 5.0 seconds in the Cobra. Perhaps giddy with delight over the modern engine, Ford also introduced the Mystic Cobra which featured a color-shifting paint with seven different colors. Green, purple, and amber were the most obvious. Two thousand 1996 Cobras were produced with the Mystic paint option, each accompanied by an SVT certificate of authenticity. It’s probably our favorite ’90s Mustang, even if it is a little unusual. 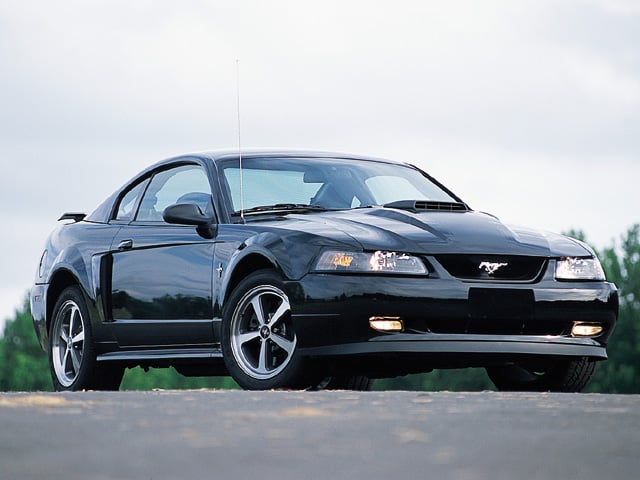 Ford revived the Mach 1 name for 2003 and 2004 and created a car around it to fit between the GT and SVT Cobra in price and performance. It used the Cobra’s 13-inch Brembo front brakes, unique Tokico gas shocks and struts, and lower and stiffer springs. Power-wise, the Mach 1 offered a performance gain over the base GT with a 305 hp version of the DOHC 32-valve 4.6L V8. Retro touches were visible throughout the interior reminiscent of the original Mach 1, another one of the best Mustangs to grace the road. 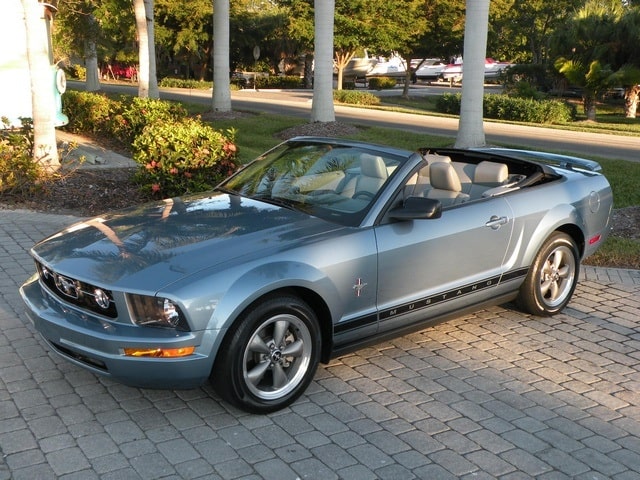 With the return to the traditional styling of the Mustang, it seems most appropriate to select a car that reflects the First Era. In this case, our pick of the best Mustangs of the early 2000s is the base Mustang convertible with the 4.0L Cologne V6 engine (that can power the car from 0-60 in 7.30 seconds). The optional Pony Package adds suspension upgrades, 17-inch wheels and tires, a unique grille design with fog lamps, a rear deck spoiler, and unique door striping and emblems. This Mustang was not a car for racing, but one of the best Mustangs for relaxing cruises along the coast.

Ford built a special production run of 50 absolutely insane, drag-race-only Cobra Jet Mustangs in 2012. In a near throw-back to the early 1960s and the Mustang A/FX race cars, Ford produced the Cobra Jet exclusively to compete in Stock and Stock Eliminator classes in NHRA, AHRA, and NMRA competition.

With the upgraded supercharger Ford claimed the engine produced 500 hp, which made it a $10,000 upgrade to gain 70 ponies. Right. Either someone at Ford spilled coffee on their calculator or they were playing fast and loose with the NHRA, et al. Based upon the low E.T.s achieved by the car in competition, calculations place the engine’s power in the 800 to 900 hp range. The best runs recorded? 0 – 60 in a reported 1.52 seconds, and quarters in the high eights. 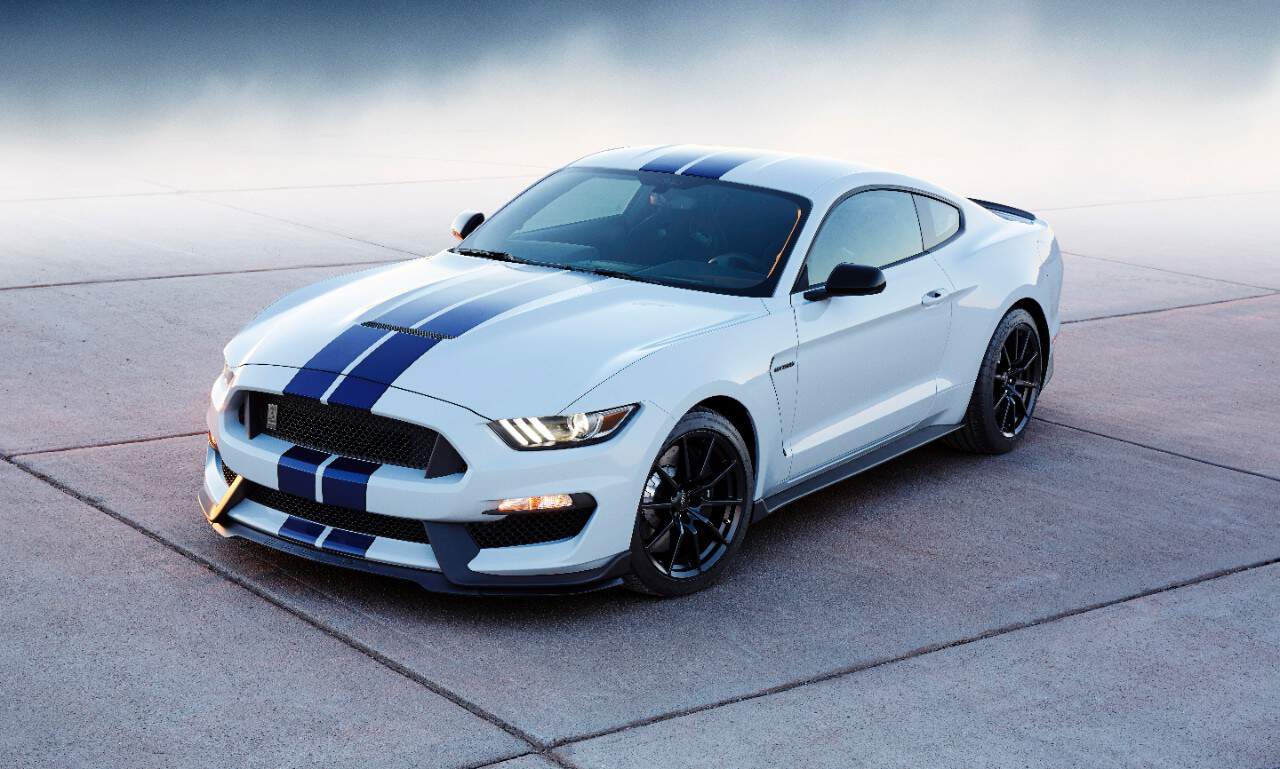 The winner of the best Mustangs here, not just for this era, but across Ford Mustang history, is the Shelby GT350, which fits nicely between the GT and the overly racy for daily use GT350R. The Shelby GT350 is based on the S550 Mustang chassis, which features fully independent suspension all the way around. Ford engineers added MagneRide shocks, unique aerodynamics bodywork, and a naturally aspirated 5.2L V8 with a flat-plane crankshaft, chosen for better breathing, higher revs, and a great sound. It produces 526 hp and 429 lb.-ft. of torque.

Under the car, Ford selected two-piece iron rotors with aluminum hats for the GT350, 15.5 inches with 6-piston Brembo calipers up front and 15.0 inches with 4-piston calipers at the rear.  The Shelby GT350 runs 19-inch aluminum wheels all around, 10.5-inches up front and 11.0-inches out back. Is this the best-looking Mustang ever? While it will never have the style and flair of the early Pony cars, this one certainly is a looker. 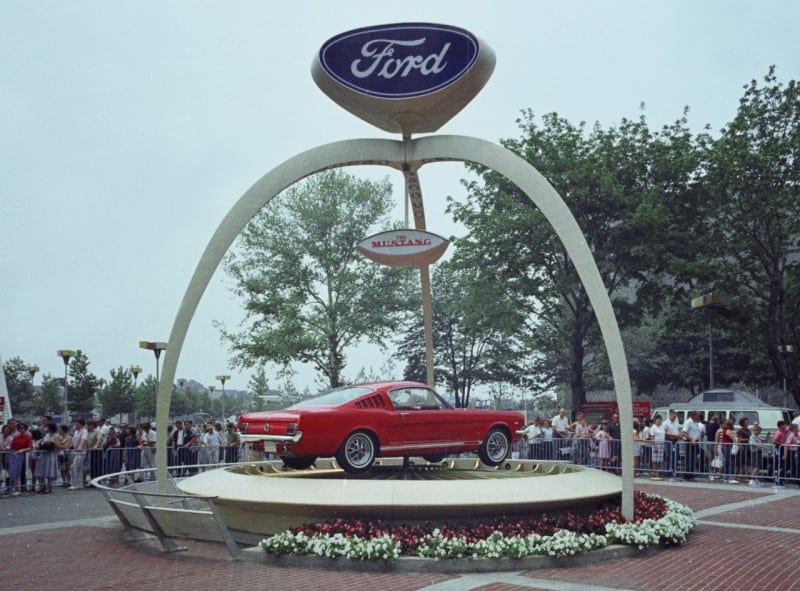 While we’re on the subject of Ford Mustangs, did you know that the original Ford Mustang boasts some interesting secrets? The term “Pony Car” was literally invented for the Mustang. Its impact on American car culture in the ’60s can’t be overstated. Let’s check out a few interesting facts from its origins.

Ford staged an introduction for the Mustang like no other car had ever seen. It was featured on a TV special, was a centerpiece at the 1964 Worlds Fair in New York, and played a supporting role in the hot new James Bond movie. 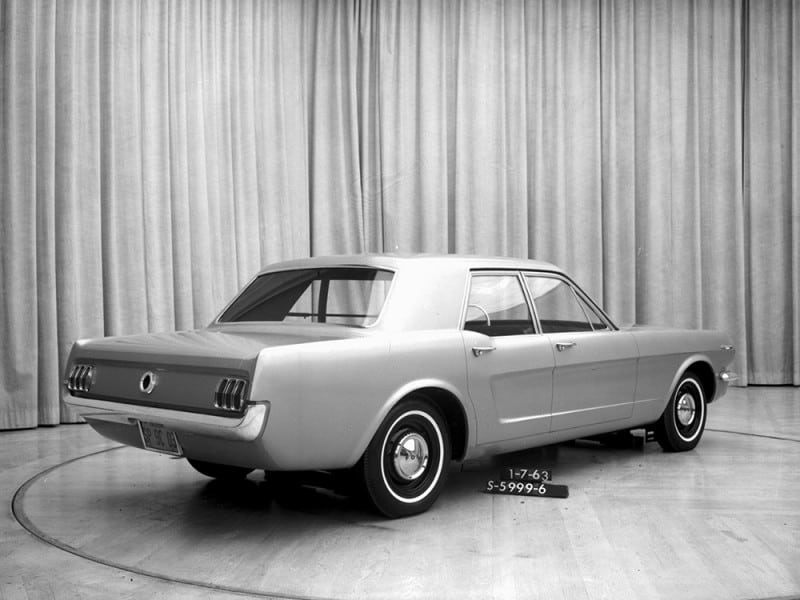 In the late 1960s, Ford’s advertising used the slogan “Ford has a better idea.” While it may have been true, it certainly did not apply to several concepts of the Mustang that were created before its public introduction.

One was a mini station wagon, or “shooting brake” if you prefer, which was produced by Intermeccanica, then Italian coachbuilder and now Canadian purveyor of fiberglass Porsche 356 replicas. Another was the sedan pictured above, which might have been enough of a drag to kill the entire Mustang line. Taking a pass on this dismal 4-door was their better idea.

The Disappearance of Mustang 100001 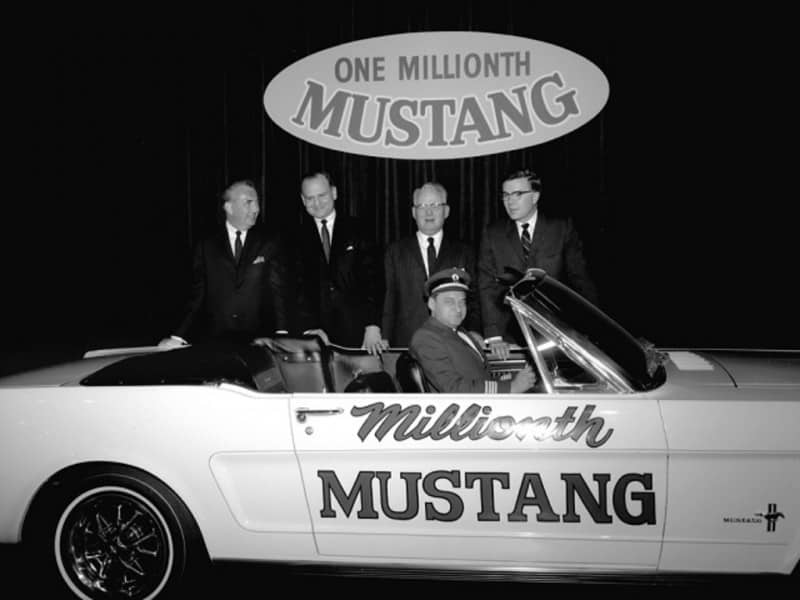 Mustang serial #100001 has been on display at The Henry Ford museum since 1966. The car was built specifically for display but was inadvertently invoiced to a dealer in Newfoundland.  The dealer sold the car to an airline pilot on April 17, 1964.  Ford learned of the sale and tried to buy back the car, but the pilot refused.

Two years later, Ford approached the pilot, this time offering to trade him the 1 millionth Mustang off the line for his car. He accepted. Ford historians consider Mustang 100001 as the closest to the first Mustang that has been discovered. Even though it may not have been the first car off the line when production started on March 9, 1964, it likely was not far behind. 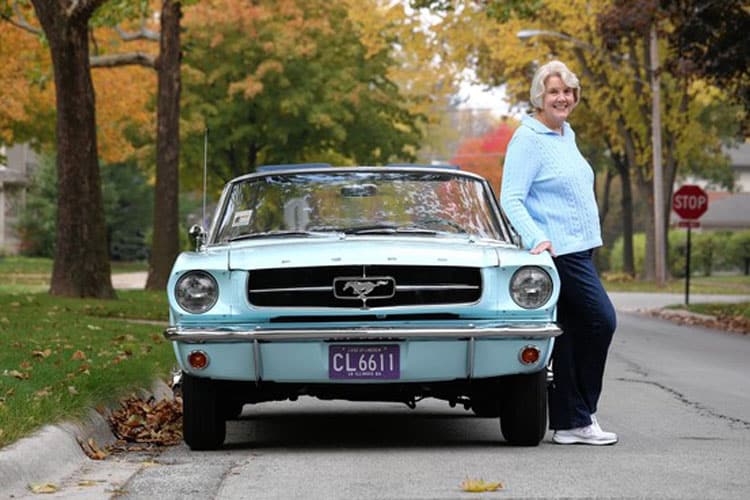 Gail Wise, then a 22-year-old recent college graduate, became the owner of the first-ever Ford Mustang. She bought it in 1964, two days before 1964 Mustangs were supposed to go on sale, and when she was driving it home she stopped traffic as drivers and pedestrians strained to get a better look at her new car. After being parked in the garage for 27 years, her husband Tom finally got around to restoring it. 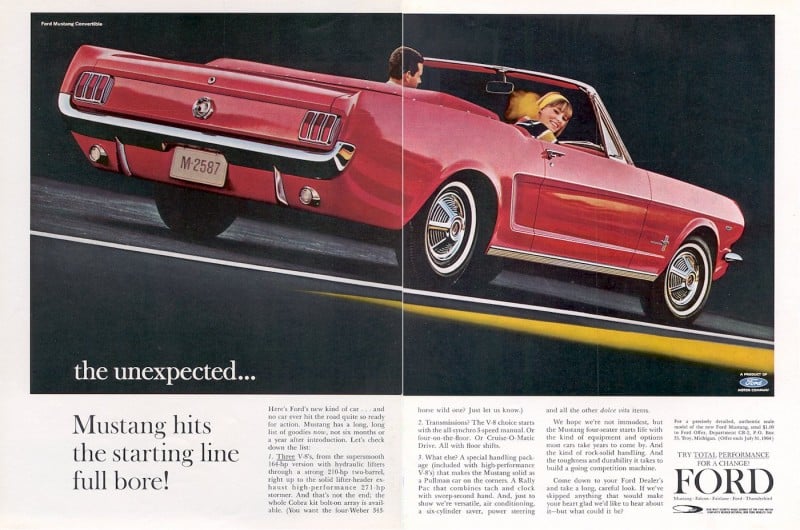 The list price for a 1965 Mustang was $2,320.96 — or about $16,800 when adjusted for inflation. Of course, today’s cars are much safer with crumple zones, anti-lock brakes, and airbags in every nook and cranny. And today’s most powerful engines emit fewer hydrocarbons into the atmosphere than even the base straight-six cylinder engine. Even still, that price does look like a good deal. 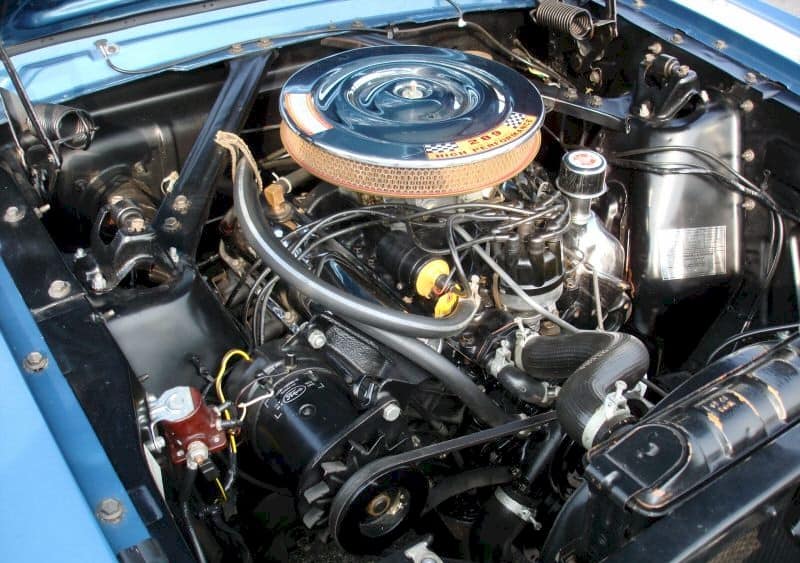 First Generation Mustangs in the Movies, Part One 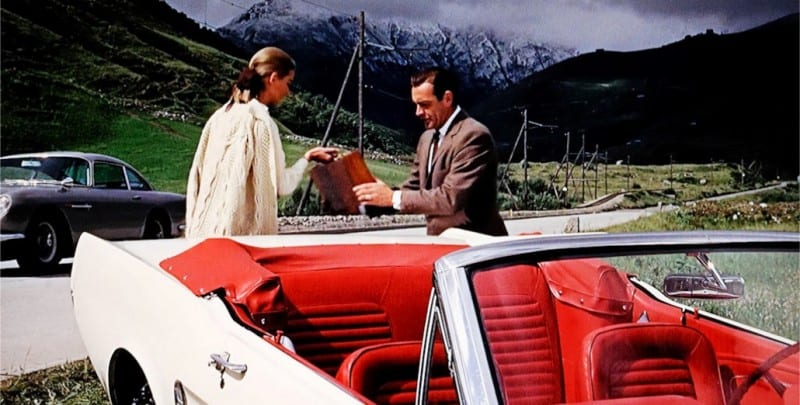 The Mustang made its cinematic debut in the 1964 James Bond film, Goldfinger. In exchange for the publicity, the Ford Motor Company donated a Lincoln Continental to be destroyed in the film’s famous car compactor scene. (Trivia tip: Even though the Lincoln weighs over two tons, the Ranchero remains level when the crushed car is loaded into the bed). 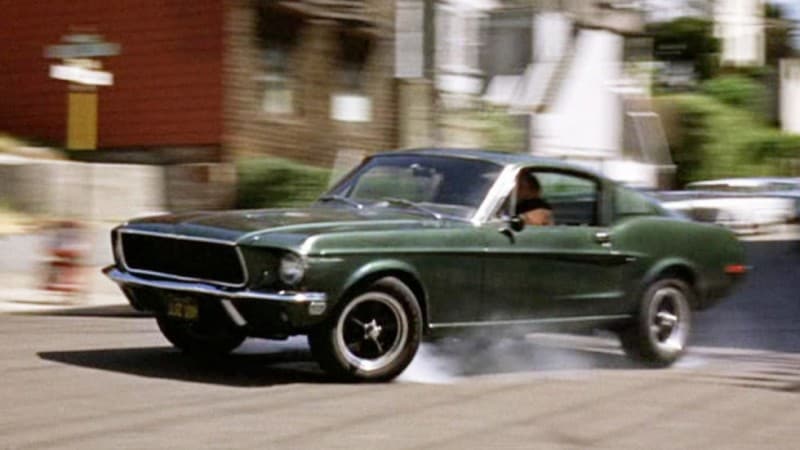 Director Peter Yates’ emphasis on realism drove the chase scene in the motion picture Bullitt to movie greatness — right down to the soundtrack. Rather than relying on music to support the action, during the 9+ minute car chase, Yates elected to showcase the throaty roar of the Ford 390 V8 engine, with rapid-fire up and downshifts and squealing bias-ply tires. The natural sound captured during the filming of this iconic action scene helped earn the film an Academy Award nomination for Best Sound, perhaps the first and last nomination generated by the sounds of one of the best Mustangs ever made.