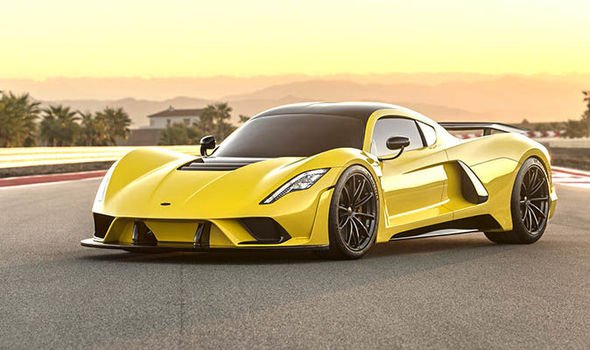 Supercars aren’t necessarily rare these days. You can pretty much find one in every big city. Still, these apex predators — the highest horsepower cars in the world — are a breed apart.

If you want to own one, apart from needing deep pockets, you’ll probably also need an “in” at the factory to get your name on this list for these often limited production runs. They can cost millions of dollars, and with the impressive number of ponies under the hood, you may never get to use more than 10% of the throttle.

These cars are about status, theater, and plain showing off. After all the highest horsepower cars in the world are often about bragging rights, both on paper and on the road. Plus, these engineering marvels often boast futuristic engineering and unusual styling, making them downright beautiful as well as bloody fast. And thanks to the advent of electric power, many of the highest horsepower cars on the market today are hypercars or full EVs. Feast your eyes on the most powerful production cars that money can buy. 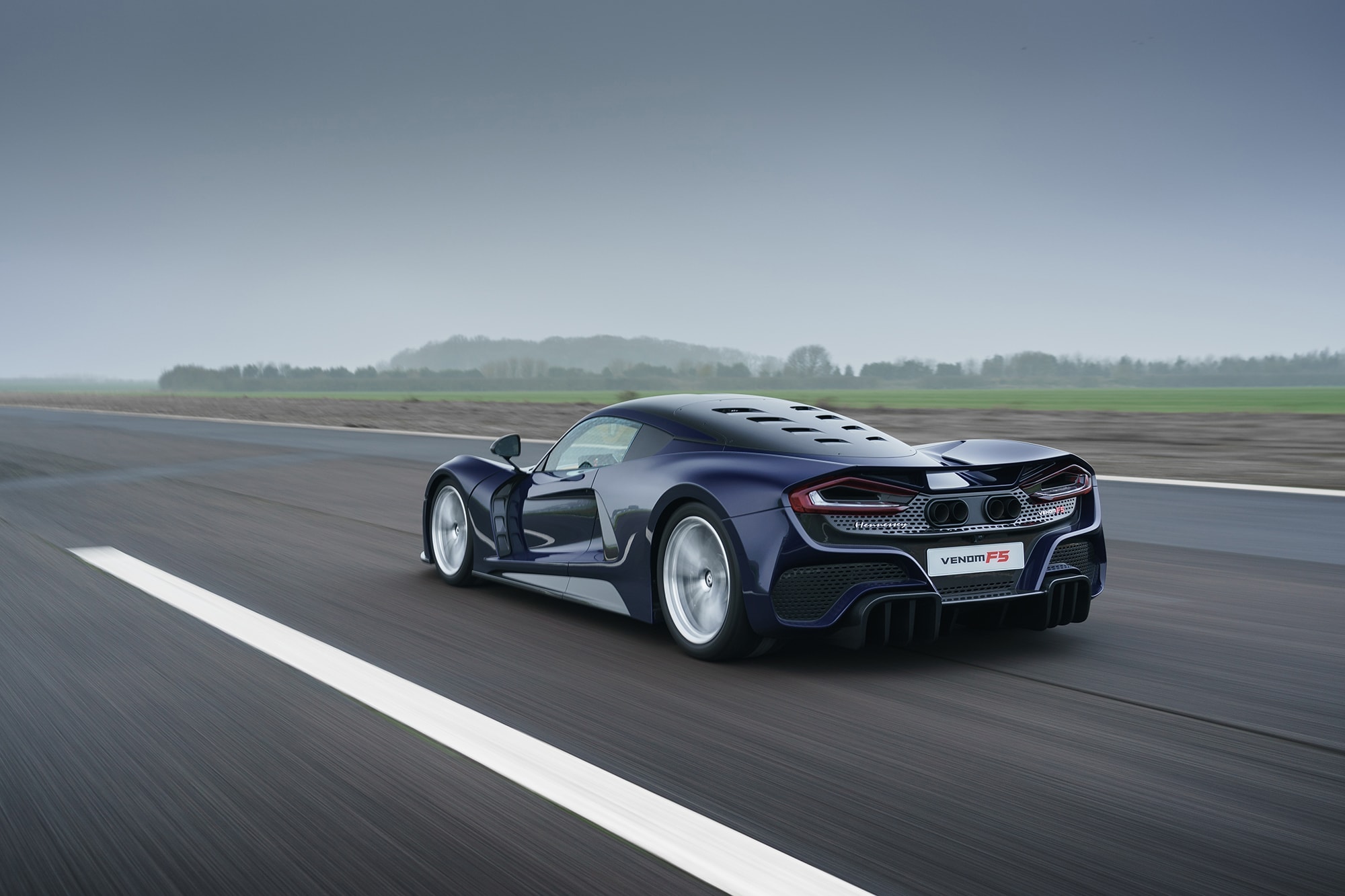 Billed as America’s hypercar, this 301 mph car was designed from the ground up with high speeds in mind. Having started building supercars by essentially modifying a Lotus, John Hennessey has taken it to the next level with the 1600 hp Hennessey Venom F5.

The Venom F5 small by hypercar standards and is powered by a rear-mid-mounted 6.6L twin-turbocharged V8. It has low-drag aero and weighs 2,998 lbs thanks to the carbon fiber monocoque chassis.

With a 0-60 mph time of 2.6 seconds and a top speed of 311 mph, the rear-wheel-drive Venom has no trouble translating all the power from its aptly named “Fury” V8 into raw speed.

The Venom F5 is a throwback of a car that rejects modern hybrid technology in favor of brute force. If you have $2.1 million to spend on your next hypercar, you’re going to want to reserve one now. 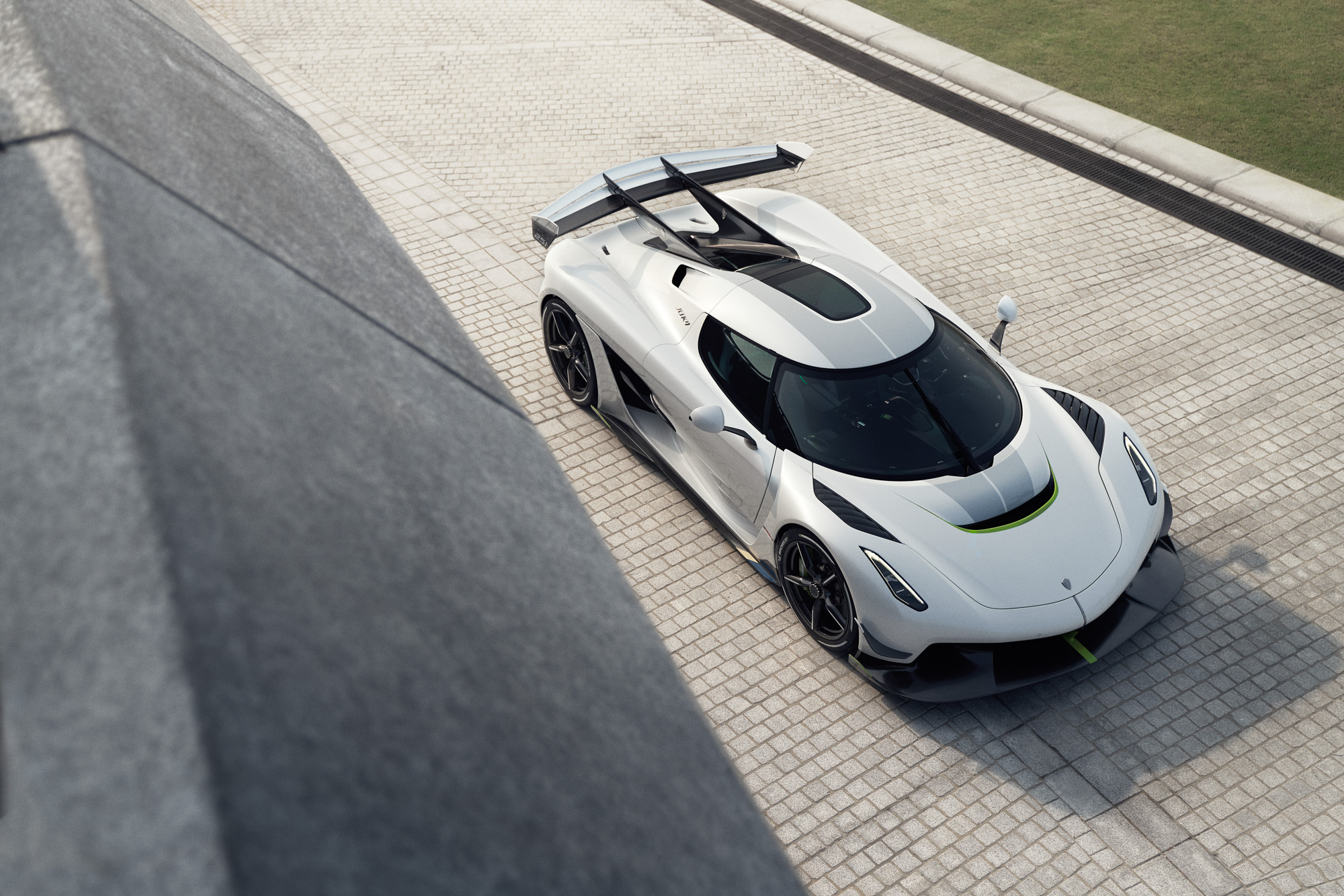 Koenigsegg is a near-perfect counterpart for the romance of the Italian supercars. It offers cold and stoic Nordic logic and brute hammer-like force to create big horsepower, rear-wheel-drive cars that push the limits of science and technology.

The Jesko is the company’s latest track-focused, road-legal car for drivers looking for that do-everything supercar that turns heads in the process.

The Jesko boasts a redesigned 5.0L twin-turbo V8 engine that produces 1,280hp (or if you have access to E85 biofuel, you can bump that output to 1,600 hp). The engine is paired with a 9-speed Koenigsegg Light Speed Transmission which the company claims pushes the envelope in terms of dual-clutch technology for impressively fast and nearly unnoticeable shifts.

And the Jesko looks the part too with a carbon fiber chassis and advanced aerodynamics. And it’s functional too with more headroom and greater visibility for the driver and over 2,200 pounds of downforce thanks to the aero. 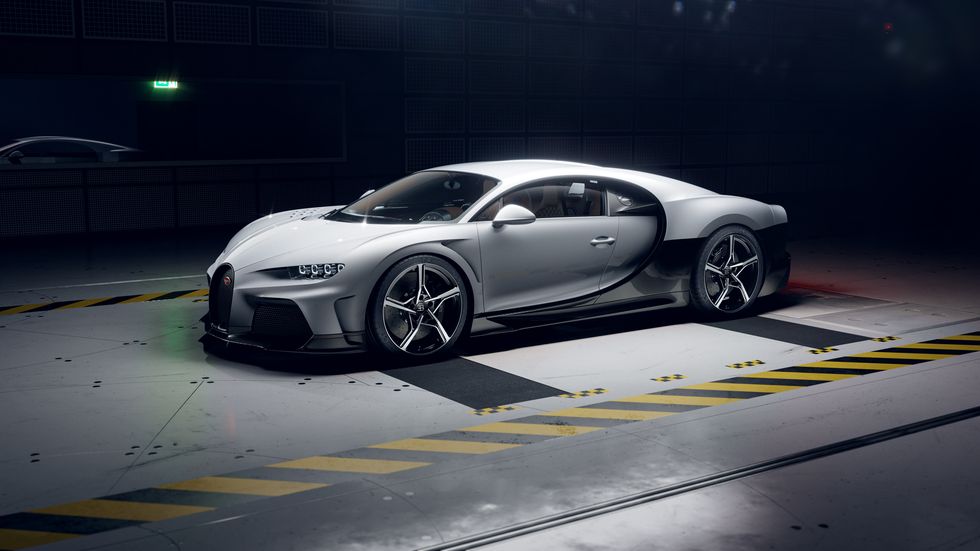 VW bought the racing icon from the early 1900s back to life with a simple mission: to make the fastest, most powerful, most next-level hypercar in the world. Bugatti loses money on every car, but this is a PR machine for VW and is, effectively, the brand’s road-going motorsport program.

Hennessey may have stolen the top horsepower thunder here, but in 2019 Bugatti snuck in to claim the win on top speed with the Chiron, logging a record-setting 304.773 mph test run and claiming bragging rights as the first production vehicle to break the 300 mph mark.

The Chiron Super Sport is four-wheel drive and one of the few cars here that you could feasibly use as a daily driver (if you have $3.9 million to spend on your daily, that is). It’s as soft and gentle as a VW Golf until you go for the handling set-up and ignite the turbos. Then it’s simply faster than the human brain. 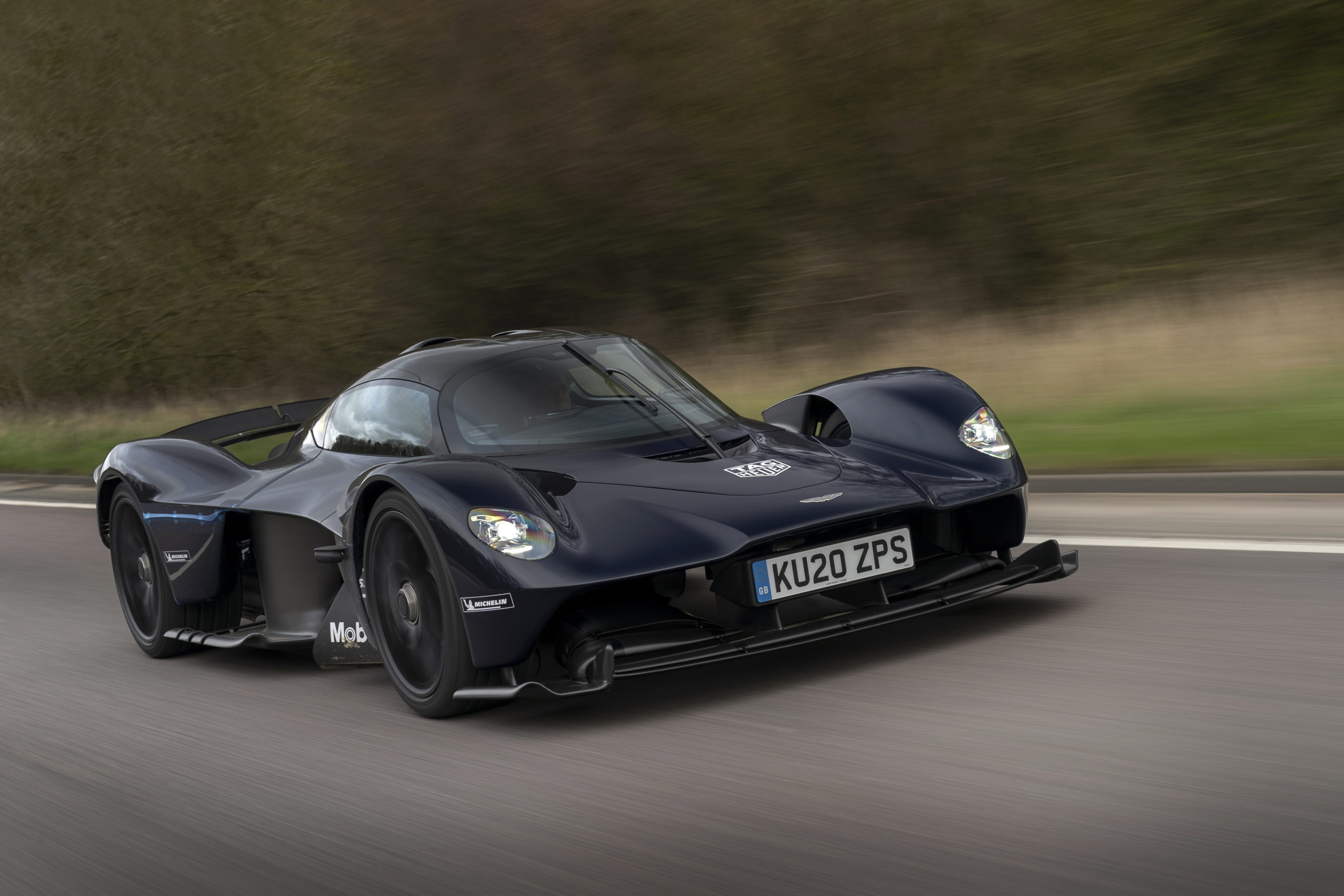 The British legend has been on a roll in the last few years, after hooking up with Mercedes-Benz to supply engines for the DB11 and the new Vantage. The 1,130 hp Valkyrie, though, is on another level entirely.

The Valkyrie is a technical exercise, designed by legendary F1 engineer Adrian Newey, and car enthusiasts around the world have fought tooth and nail to get one of the 150 models promised in 2022 production. As Aston Martin’s first hypercar, it was a joint project with Red Bull Racing that resulted in what is essentially a road-legal race car weighing just 2,270 lbs.

The start of the hybrid powertrain is the 6.5L V12 that makes 1,000 hp. The addition of the electric motor is good for a bump of 160 ponies, all delivered to the rear wheels via a 7-speed automatic transmission. With this weight and this power, it could be the most dramatic road car out there right now.

And if you don’t need something so ordinary as this daily driver (which has a price tag of $3 million), Aston Martin stripped down the hypercar for an even more limited run of track-day beasts, the Valkyrie AMR Pro. James Bond would approve. 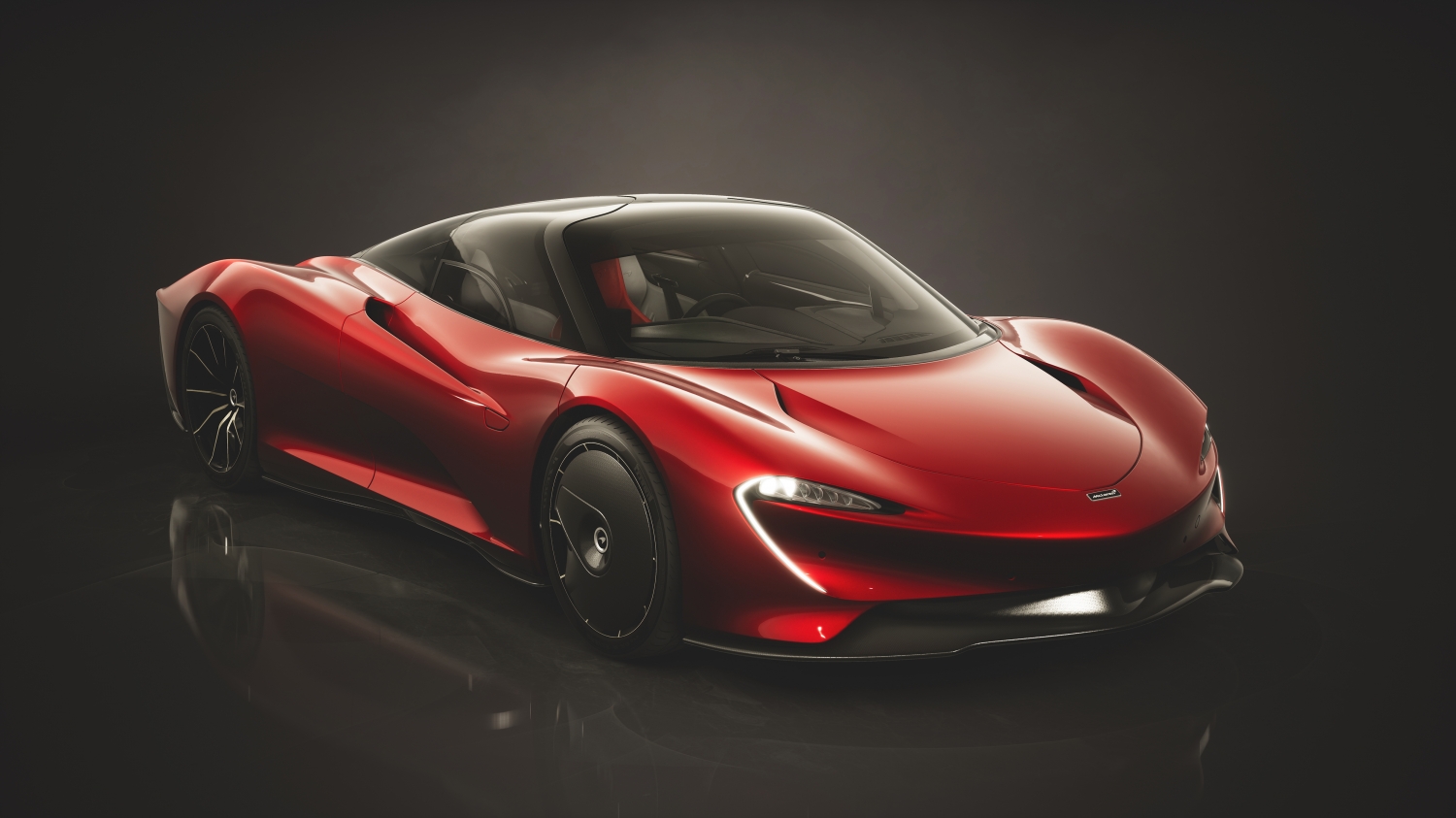 McLaren enters the hypercar game with the aptly named Speedtail, a 1,070 hp vehicle that takes top honors as both the fastest and most aerodynamically efficient car that McLaren has built to date. The distinctive tear-drop shape of this sleek hypercar helps the Speedtail hit a top speed of 250 mph.

The Speedtail is outfitted with a 4.0L twin-turbocharged V8 and parallel hybrid system that is good for a roughly 3 second 0-60. Weighing in at 3,153 lbs, the Speedtail isn’t as light as some of its carbon fiber competitors on the market, but you get an impressively decked-out interior that you’ll likely find worth that weight penalty.

The Speedtail joins the Elva, Senna, and Senna GTR in McLaren’s Ultimate line, and it’s easy to see where it draws its inspiration. But as the pinnacle of the ultimate series, it also isn’t surprising to see that the Speedtail tops the charts in terms of specs and stats compared to its fellow McLarens.

With a starting cost of around $2 million, only 106 Speedtails are planned for production — all of which are already claimed. This is probably fine as this hypercar technically isn’t street legal in the U.S. though McLaren notes you can take your hypercar for a spin in the countryside under the show or display law — your local Coffee and Cars will thank you. 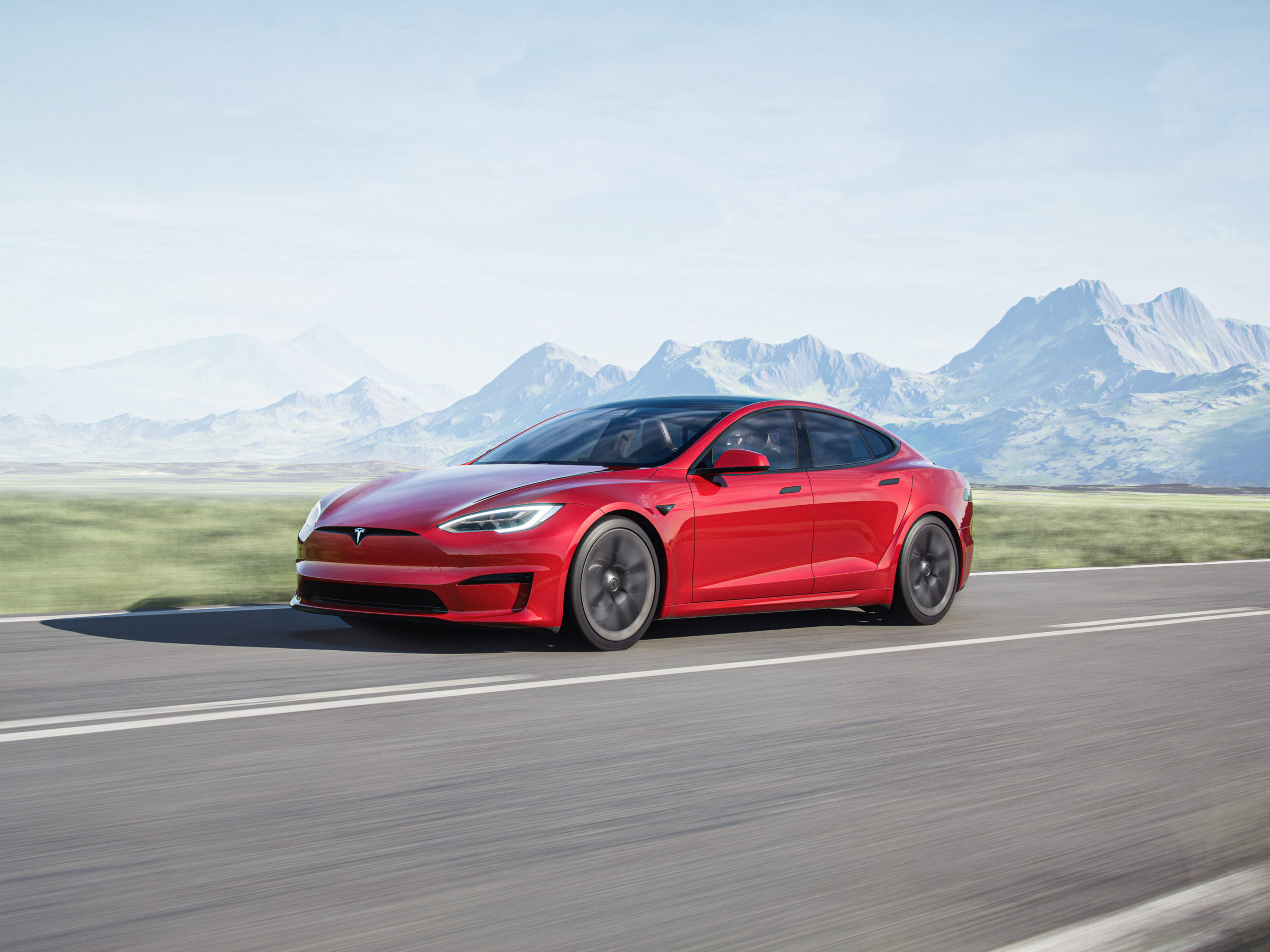 Are you in the market for a family sedan that will hit 60 mph in under 2 seconds and top out at 200 mph? If so, the Tesla Model S Plaid goes beyond even a ludicrous amount of horsepower with a whopping 1,020 hp. Plus there’s the torque – 1,050 lb.-ft. of it to be precise — and it’s all available instantly.

Allow that to sink in for a moment. It’s a family sedan that is rubbing shoulders with the supercar elite and able to demolish many more capable sports cars over the quarter-mile. Just plant your foot and the car will do the rest (well, with some mode adjustments) thanks to the tri motor all-wheel-drive platform.

On the rare occasions you take over the wheel from the Autopilot system, you’ll have a devastatingly fast car underfoot. Sure it’s heavy at 4,766 lbs, but it is also scary fast in a straight line. Plus with a 390-mile range and supercharging up to 200 miles in 15 minutes, you can take this EV pretty much anywhere.

The Tesla Model S Plaid is a weapon and a luxury car, all rolled into one. If you’re in the market for something a little different and looking for a production car you can actually own (no limited runs or already spoken for models here), you might want to take a look at the Plaid. 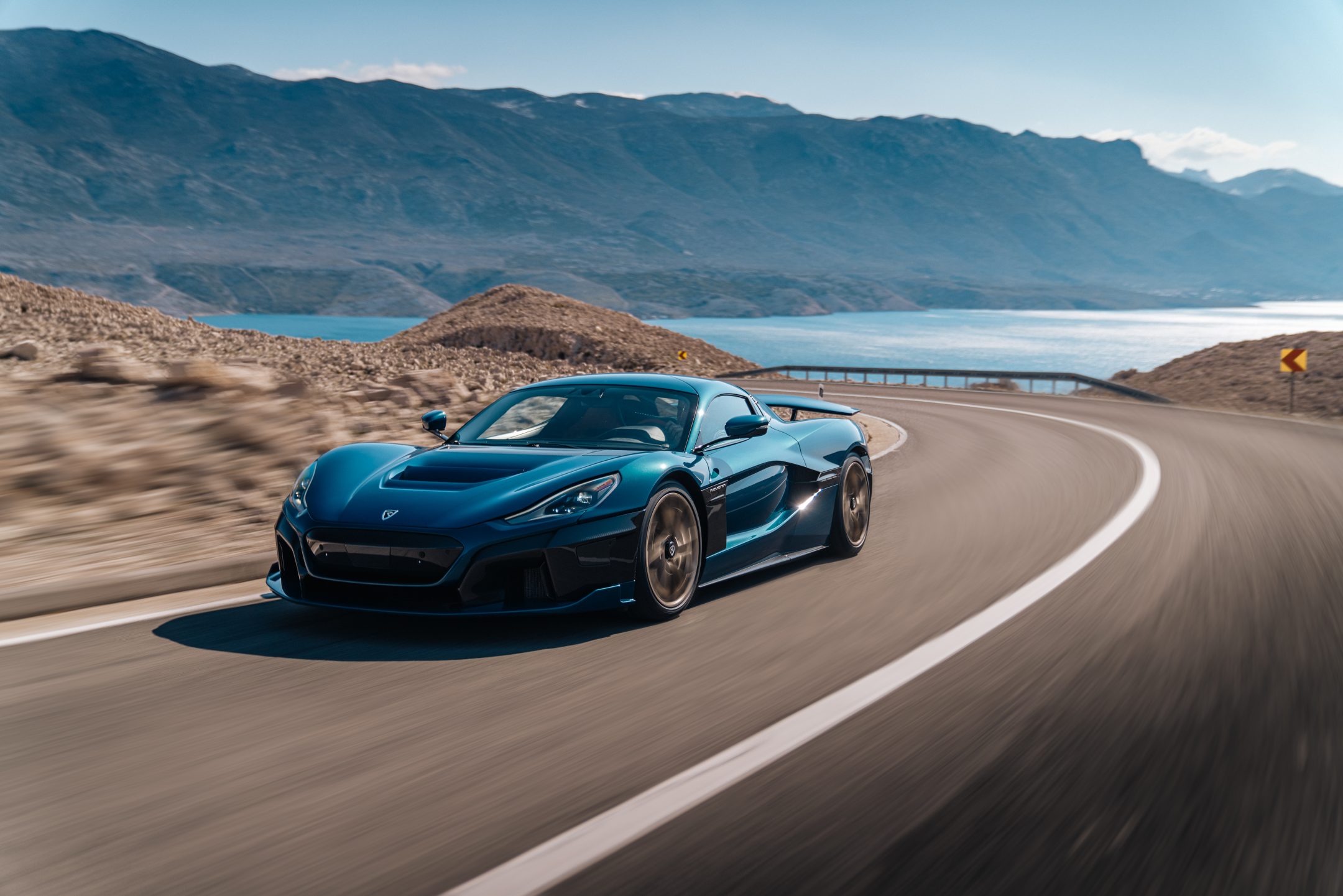 Rimac was the lone wolf in the EV hypercar sector for a long time. Maté Rimac pioneered a technical tour de force in the Rimac Concept One and now works with car manufacturers around the world to perfect their EV systems. The Koenigsegg Regera and Aston Martin Valkyrie both have Rimac systems on board. Some others do, too, though they don’t shout about it.

The recently unveiled Nevera takes the Rimac C_Two concept car to production. This all-electric hypercar makes a whopping 1,914 hp and is capable of a top speed of 258 mph. The Nevera also boasts a 0 to 60 sprint of 1.85 seconds.

All that power is distributed from the H-shaped 120kWh battery via Rimac’s improved all-wheel torque vectoring system. The Nevera even has an onboard AI driving coach that uses the car’s onboard sensors to provides guidance to optimize your on-track performance.

With a price tag of $2.4 million, the Nevera is a look at where the high horsepower hypercar revolution is headed. 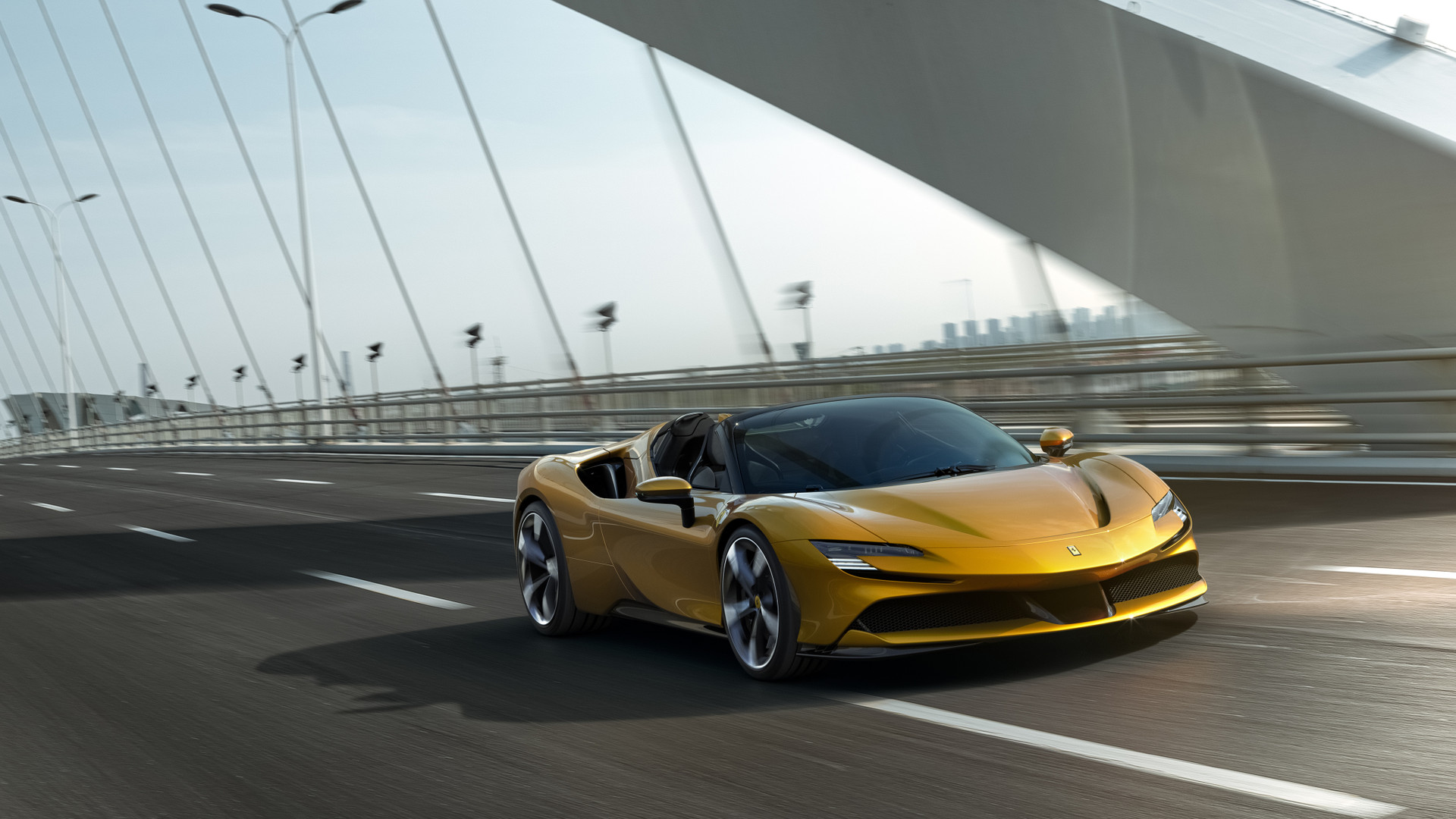 The Italian legend opted for a drop-top with the latest iteration in their hypercar lineup. The SF90 Spider has a retractable hardtop and an impressive 986 hp plug-in hybrid system, pairing a 4.0L V8 with three electric motors.

It’s a 211 mph car that hits 60 mph in roughly 2.5 seconds, and the hybrid system provides torque fill and torque vectoring in this all-wheel-drive package which makes 590 lb.-ft. of torque.

Following in the footsteps of the Ferrari LaFerrari and SF90 Stradale, the SF90 Spider delivers top hypercar performance in a convertible package, a unique option for drivers wanting high horsepower and open-top driving.

Surprisingly economical too, the two-seater Spider is rated for 20 mpg city and 24 mpg highway so you can daily this beauty if you have a spare half a million lying around. The SF90 Spider has a starting MSRP of $558,000. 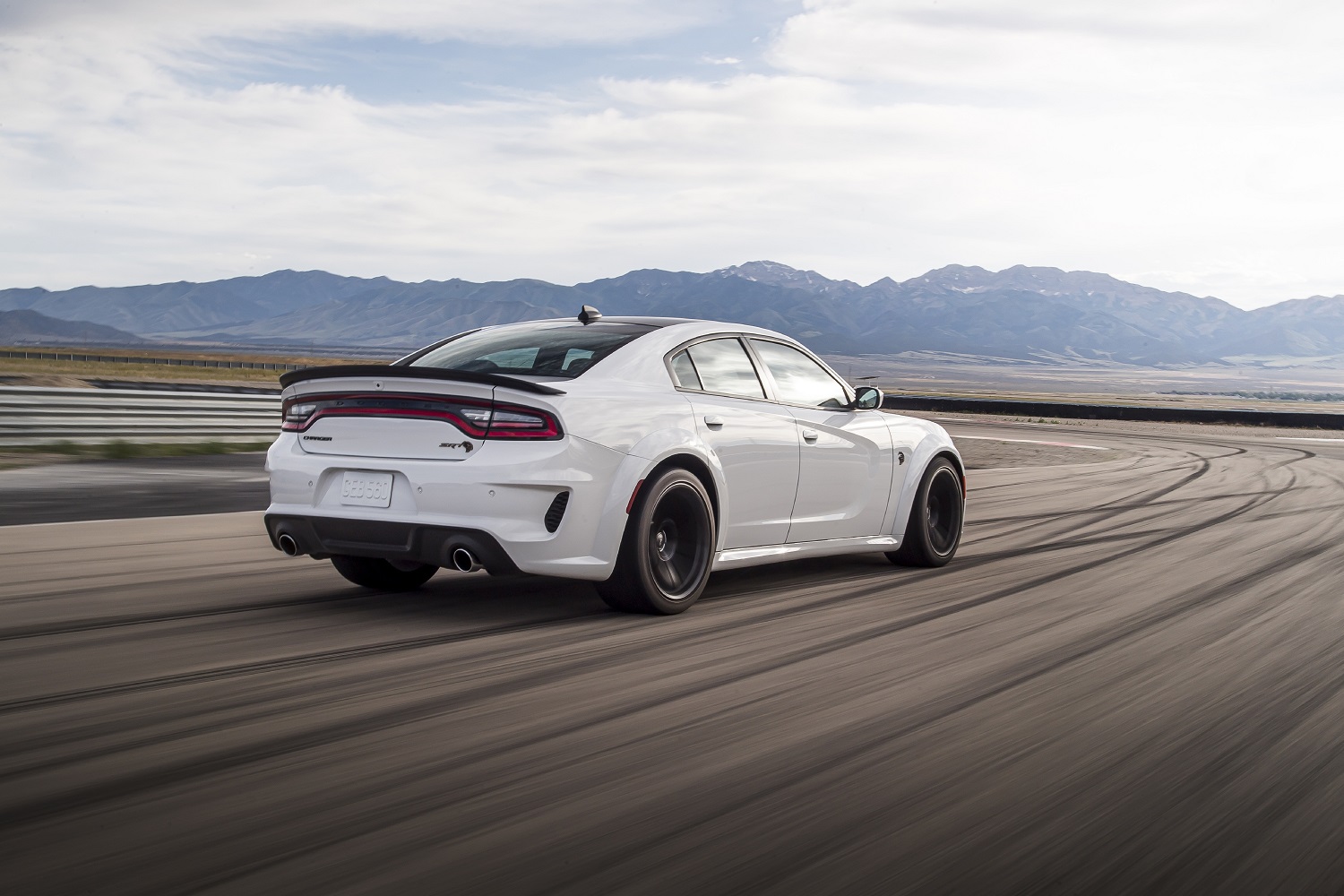 The Dodge Charger SRT Hellcat Redeye could be considered a street-legal drag racer and for good reason. This 807 hp monster could easily devour drag strips and has a modest starting MSRP of $72,670.

The stylish and burly rear-wheel-drive sedan has plenty of presence and hides a 6.2L supercharged V8. It pumps out up to 707 lb.-ft. of torque, can smoke the tires in any of the first four gears, and hits 203 mph flat-out.

And before you start complaining that the Hellcat has “only” 797 hp, keep in mind that this sedan is actually decently affordable, and one of the few cars on the list that you can order without a personal invitation. Plus, what other high horsepower cars can you reasonably tote your kids around in? 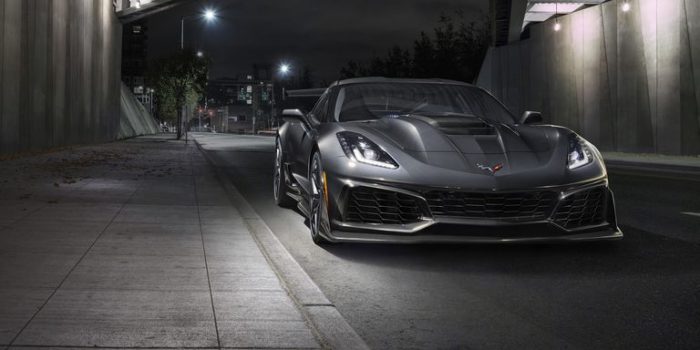 There is no clever hybrid technology; this is a good old meat-and-potatoes 6.2-liter supercharged V8 using essentially the same engine featured in the Dodge but with its own unique development. You can order a seven-speed manual transmission for the full American supercar experience and rest easy knowing this a brutally fast car.

It can also match Europe’s best when it comes to aesthetics, too. The world used to laugh at American supercars, but that doesn’t happen anymore thanks to cars like the Corvette ZR1, which looks set to be one of the purest gas-powered sports cars money can buy. It’s become the modern-day Dodge Viper, but it’s so much better. 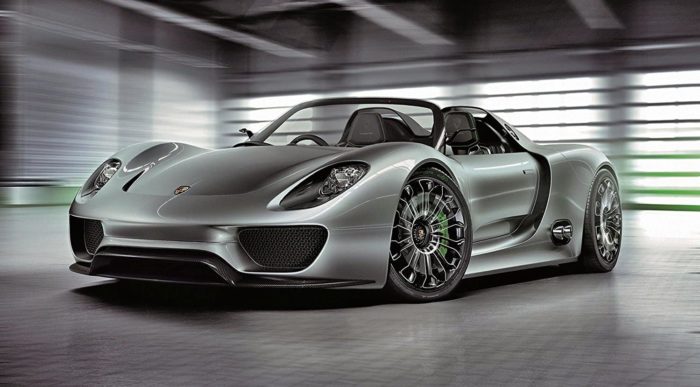 The final member of The Holy Trinity was perhaps the most technically impressive. It had just 770 bhp, but this mid-engined supercar was four-wheel-drive and every bit as fast as the McLaren and Ferrari. Porsche managed to produce a car that, technically, returned 80 mpg as well.

It lost out to its Italian and British rivals in the group tests thanks to a perceived lack of drama and cache. At $845,000, it was a performance bargain, though, present company considered.

The Porsche relies on a 4.6-liter V8 together with electric motors to produce that 770 bhp and 944 lb-ft of torque.

That resulted in a car that hit 60 mph in 2.5s and didn’t stop until it breached 200 mph. The last one rolled off the line in May 2015, but if you’re hoping to get a used one cheap then you’re in for a disappointment. Today the Porsche sells for up to $2 million on the open market.

Nick spent 20 years driving the fastest cars on Earth for Motor Trend, Automobile, Super Street and The Sunday Times. He was fortunate enough to drive F1 cars, one-off Bugatti Veyrons, Paganis and Koenigseggs. He knows a thing or two about the fast lane in life.