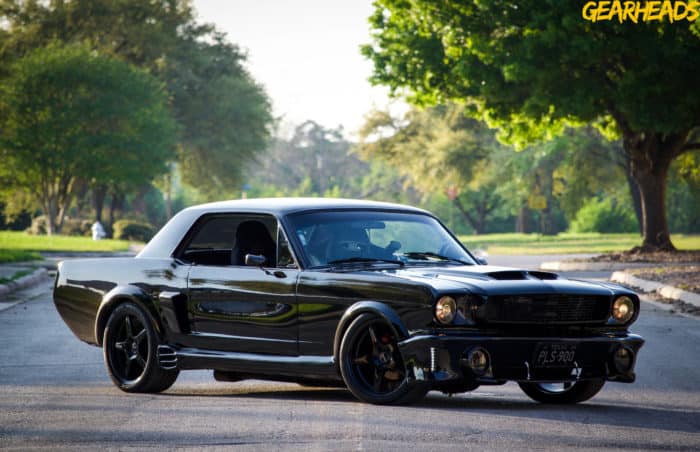 In my humble opinion, the only thing cooler than a perfectly restored classic car is a restomodded classic car. Restomodding is the practice of taking an old hunk of junk and not only restoring it but updating it with modern fabrications, safety features, powerplants and/or electronic components.

Restomods can be anywhere from clean and simple to a complete overhaul on a classic car, but one thing remains the same across all restomods: they’re cool as hell.

Luckily, I had the opportunity to meet the owner of a beautiful 1966 Ford Mustang at a cars and coffee meet by the name of Beto Guerrero. Beto is an absolute gearhead who loves to build and tinker with his cars rather than leave them stock. When I met him, he had a Subaru WRX which he modified himself, a project car which he was building himself, and this ’66 restomod Mustang which he, of course, built himself. 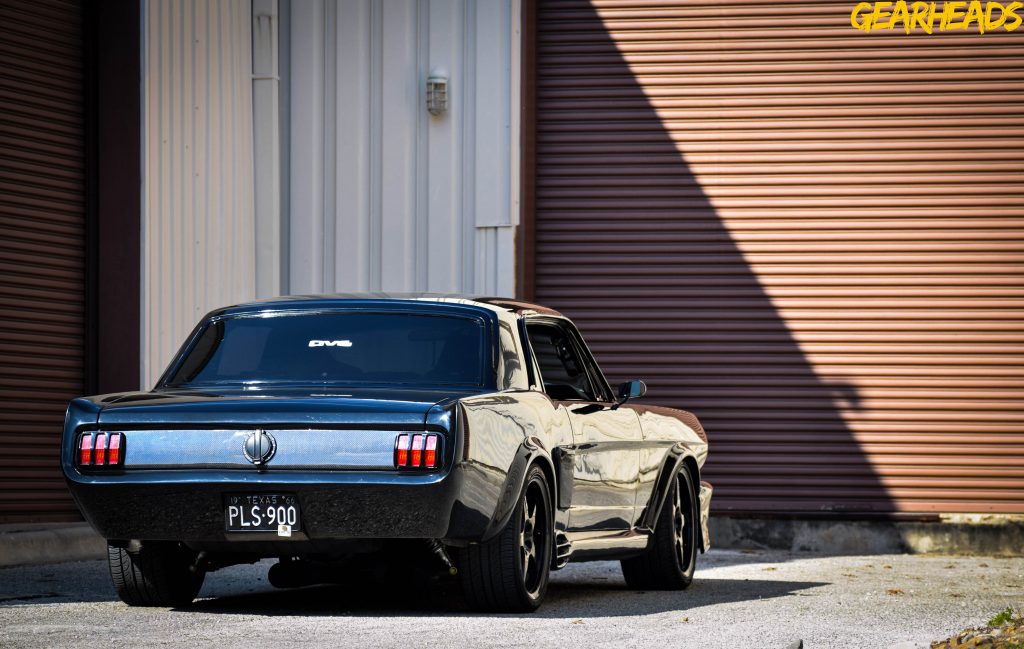 When Beto got his hands on this mustang in April 2011, it was a rusty bathtub on wheels. Then maroon, the automatic mustang quickly saw its transmission replaced by a factory 4-speed manual. A Hurst short-throw linkage connects the 4-speed to the important parts while a custom hydraulic Frankenstein clutch (sourced from an S15 and a Supra) helps get those gears synced up.

Something neat that I found out about this Mustang is that the cool factor was turned up to ten simply by swapping the transmission. You see, like most mustangs, the most common transmission for the ’66 was automatic. After that, the next most common was the factory 3-speed, but perhaps the rarest of all is the factory 4-speed transmission Beto swapped in. Put that in your pipe and smoke it. 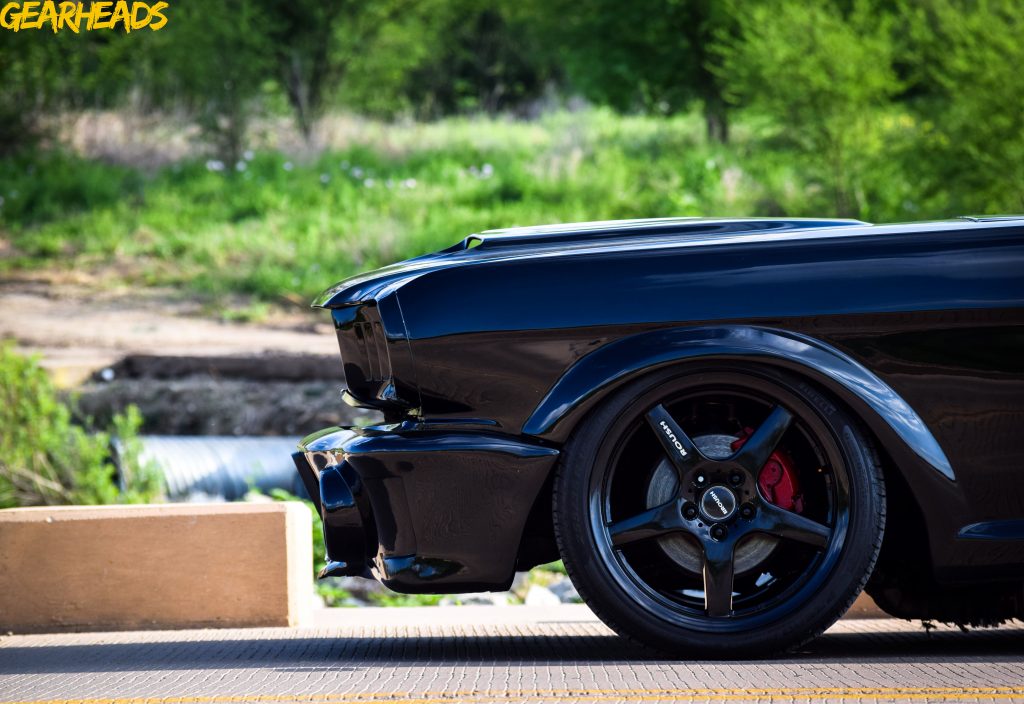 As you’ll see in a hilarious picture of the very confused-looking mid-stage build, the restomod Mustang previously sported rims from a 2012 GT, but those are long gone now. In their stead are a set of gorgeous black 18″ Roush rims that are doing this car a ton of favors in the looks department. 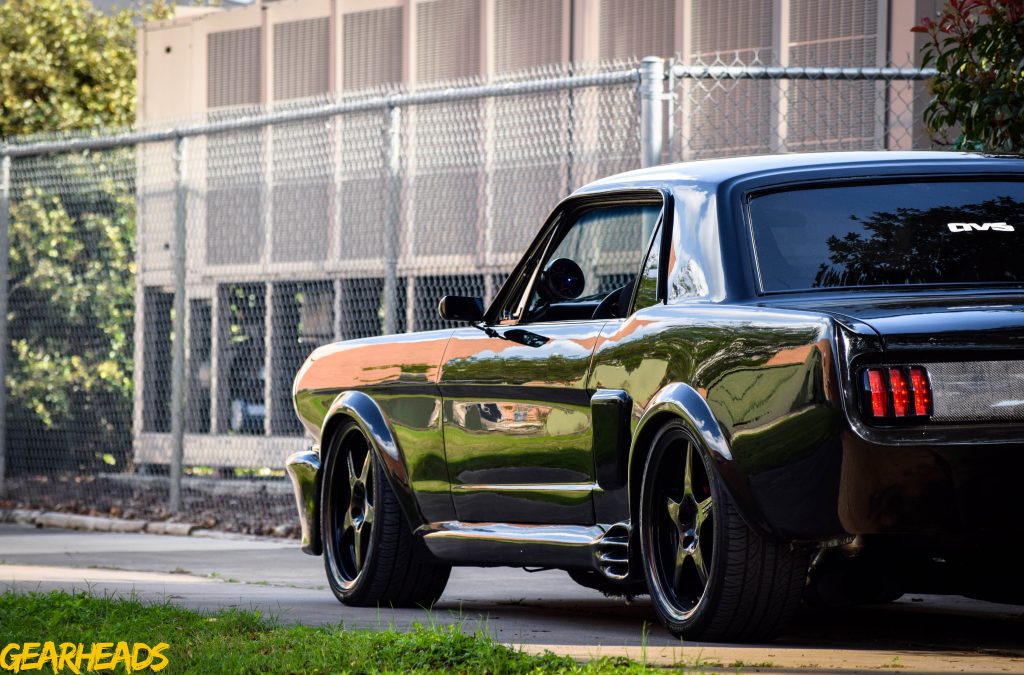 The factory V8 wasn’t enough to meet Beto’s standards so, at the risk of being called outdated, he swapped in a beastly 5.0 302 H.O. V8 from an 80’s Crown Vic. Not only has it stood the test of time, it puts down some reliable power, too. 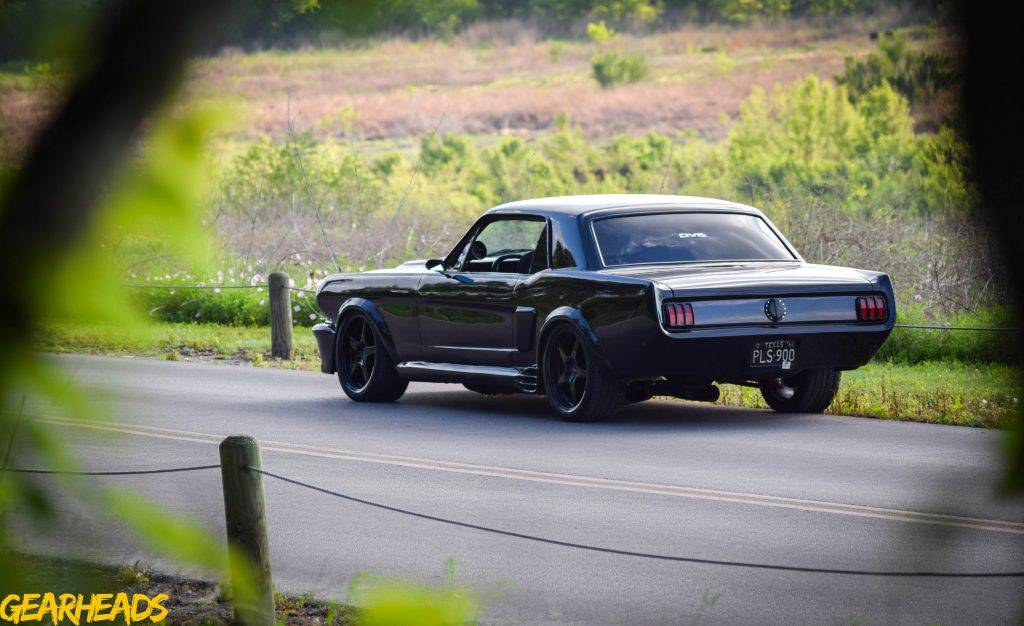 One of the most difficult parts of shooting a car like this is that it just looks fantastic from every angle, and it’s even better in motion. You feel like you need to be constantly hitting the shutter release when you’re around it, and when she’s gliding towards you on that spring and coilover setup, you just can’t help but drool a little bit.

Something else that I learned is when you shoot a car that looks this good in even a busy public park, people generally won’t get mad at you for holding up traffic for a second here and there. I was expecting a healthy amount of sideways glances, horn honks, and the occasional shouting match, but it never happened. Instead, we were greeted with smiles and waves as people slowed down to snap a few shots, chew Beto’s ear about the build for a moment, or ask me where they could find the pictures. The moral of the story here is not to let your expectations ruin a good time. 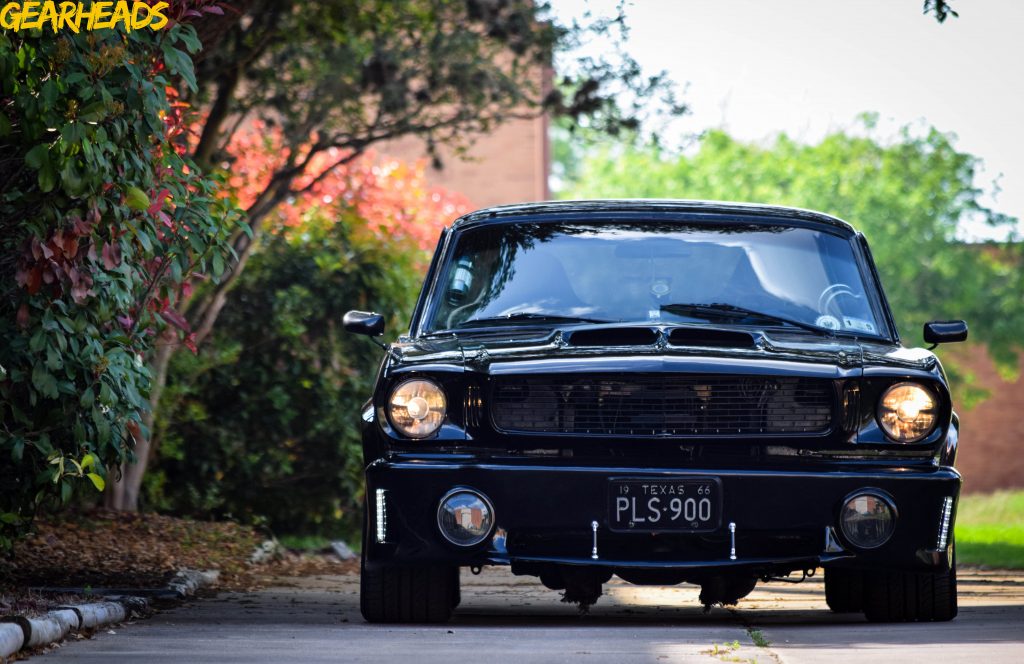 I’ll be honest, the majority of my car knowledge is Google-based. My own car is a lease, so I never have to touch the engine and I’ve never had a car to really tinker around with, so most of what I know is hypothetical. I always tell people that I know a lot about cars as a subject, but when it comes to the magic under the hood, it’s best to bark up someone else’s tree.

Luckily for you guys, Beto sent me a cheat sheet of specs for the car so I could decipher what it all meant in my own time. The alternative would have been me pretending like I knew what he was talking about and nodding my head a bunch, so I’m very grateful for that. Realistically, I can’t expect to have the same amount of knowledge as someone with this much hands-on experience. That’s only fair. 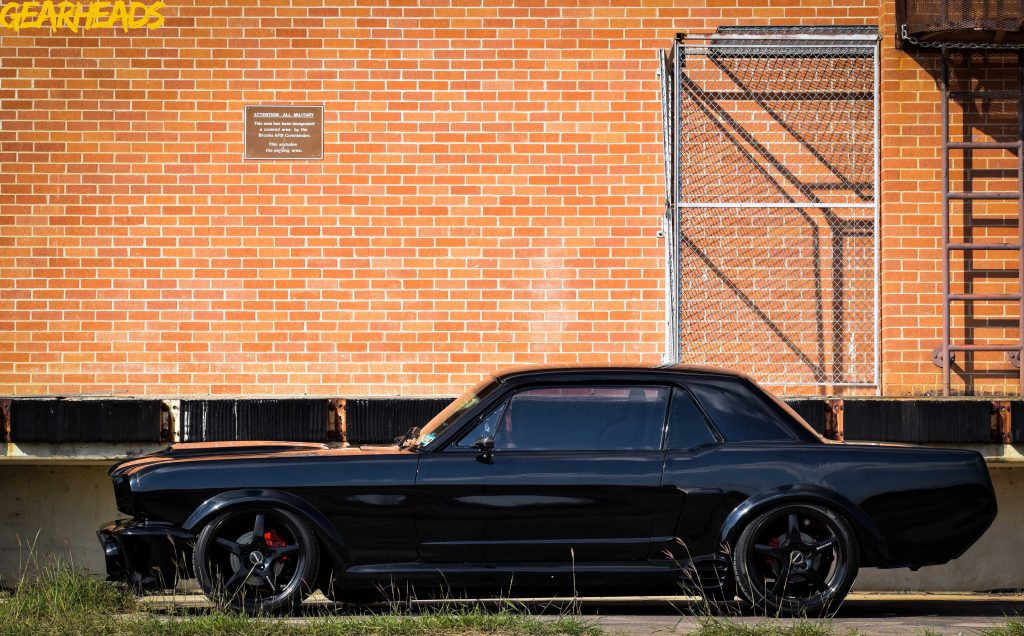 The Mustang has an upgraded ignition system complete with push-to-start, a new electric fuel pump, carburetor and rev limiter. It’s also got disc-brakes on all four wheels now as well as an upgraded brake booster. For the sake of a smoother and better-handling ride, he also added subframe connectors. 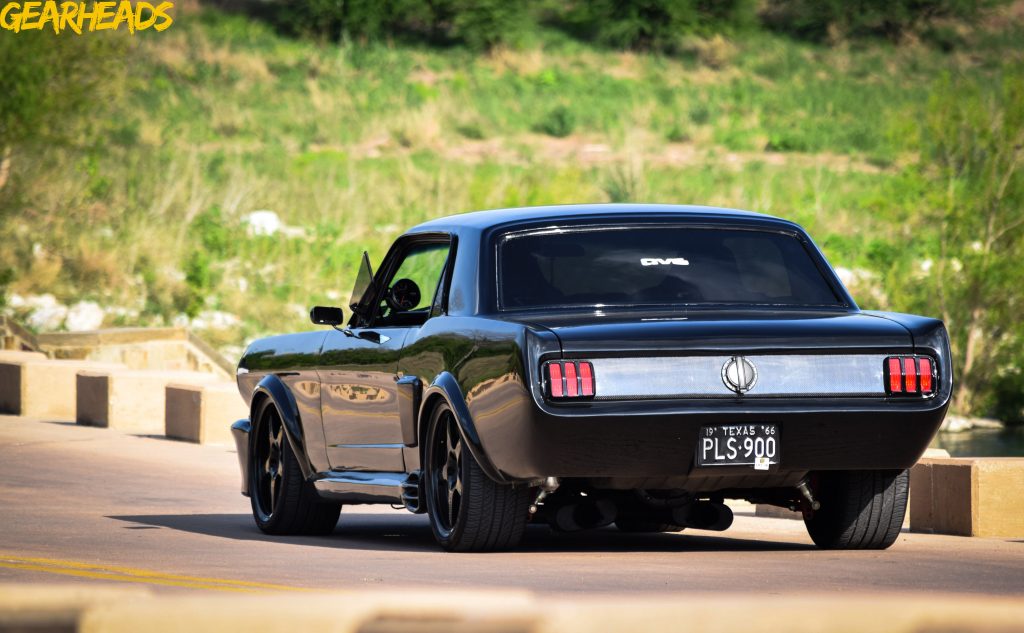 As far as lighting is concerned, the restomod got LED indicators front and rear. Don’t forget about the bodywork either; Beto easily has several hundred hours of work in the fiberglass and body panels alone, which he did himself. This in itself is a perfect reminder that restomodding a car is tough and time-intensive work. Even on the day I went to meet up with him, he was still working on the damn thing! Of course, it wasn’t exactly crucial to the build at that point; he was simply installing a pair of subwoofers in the back. Subs may get a bad rap sometimes, but if you heard the noise this car makes at a standstill compared to the volume of the radio, you’d understand that they were absolutely necessary. 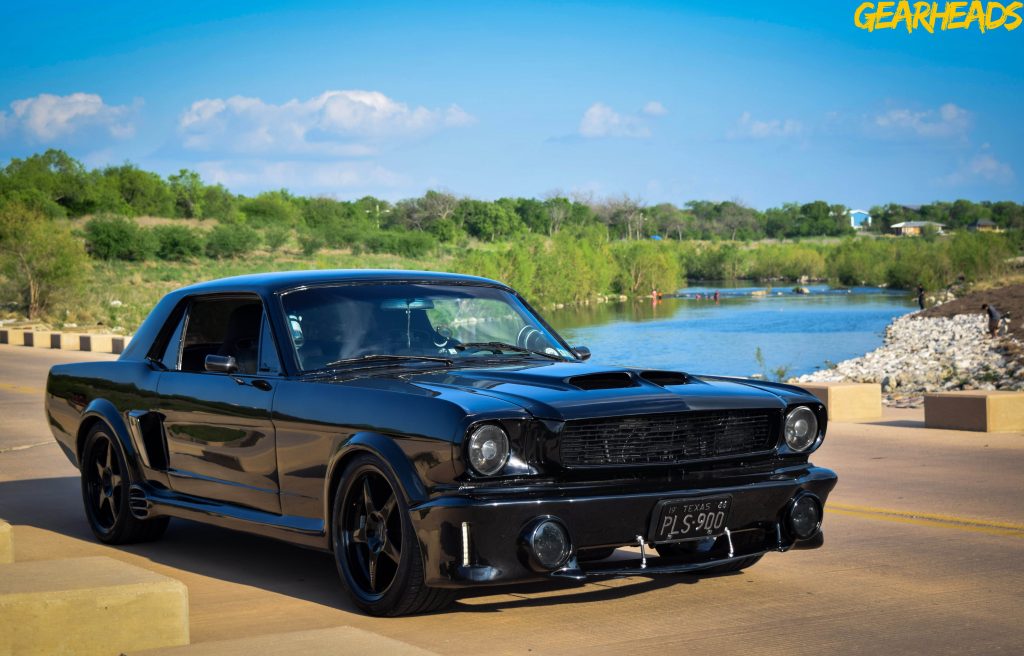 You might’ve noticed by now that Beto’s restomod Mustang doesn’t actually have door handles. I was thoroughly confused when I approached the car but Beto told me he shaved them off intentionally. Not only because it looks sleek as hell, but so he could pop his doors open with a click of the key fob like K.I.T.T’s badass older brother or something. 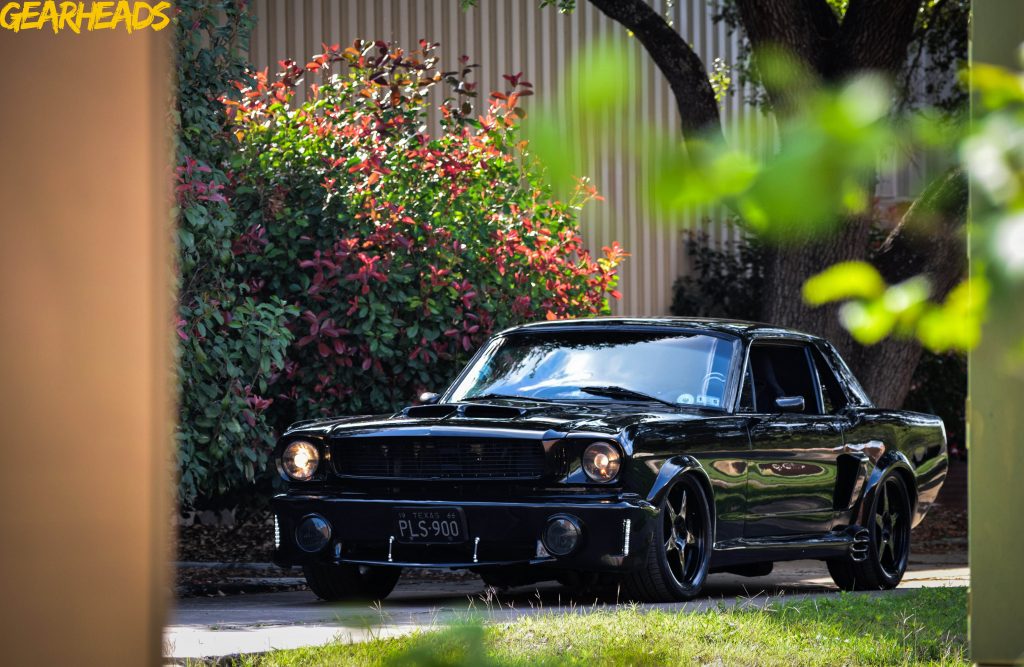 Shooting this car was an absolute blast but the only thing I would do differently is actually figure out where the damn foglight switch was. Beto had just installed them and couldn’t remember how to turn them on, but other than that, the shoot went off without a hitch! Well, unless of course you noticed the fact that I didn’t get a single picture of the inside of the car because I’m a bad person and I forget things. 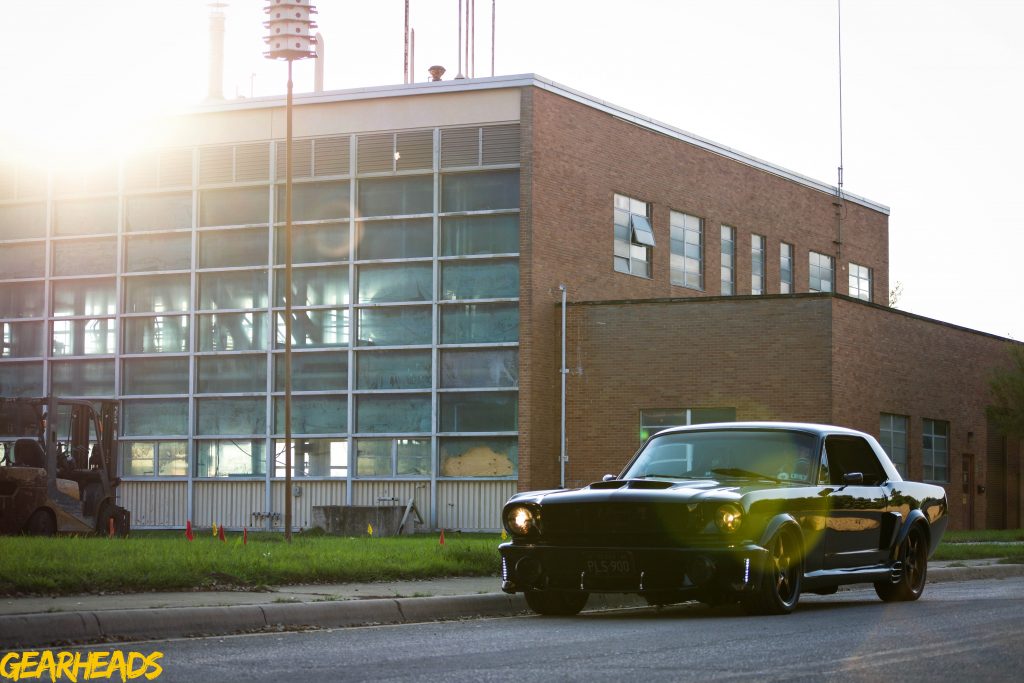 Beto has also been working on a super-secret project that, according to him, is now 90% done. Hopefully, he will allow me the pleasure of another photo shoot with his new build in the coming months.

Below, you’ll find a few pictures Beto sent my way showing the project at various stages in the build. As you can see, this restomod Mustang has been through quite a bit and, even more obviously – restomodding a car is some serious work when you’re looking at turning a scrap heap into a work of art. 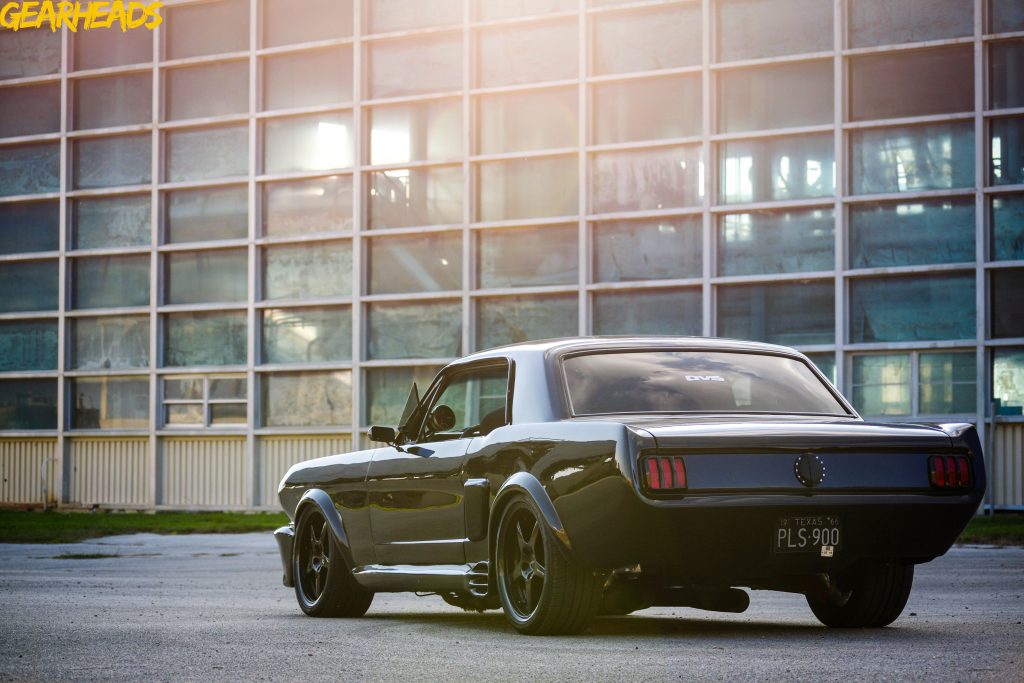 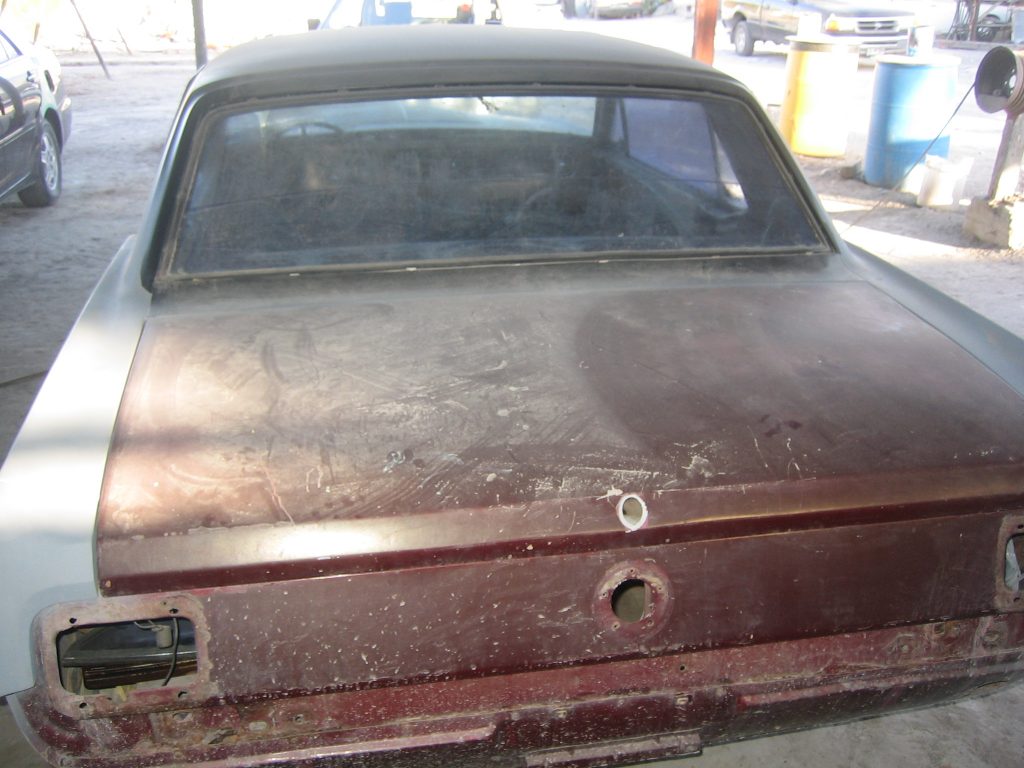 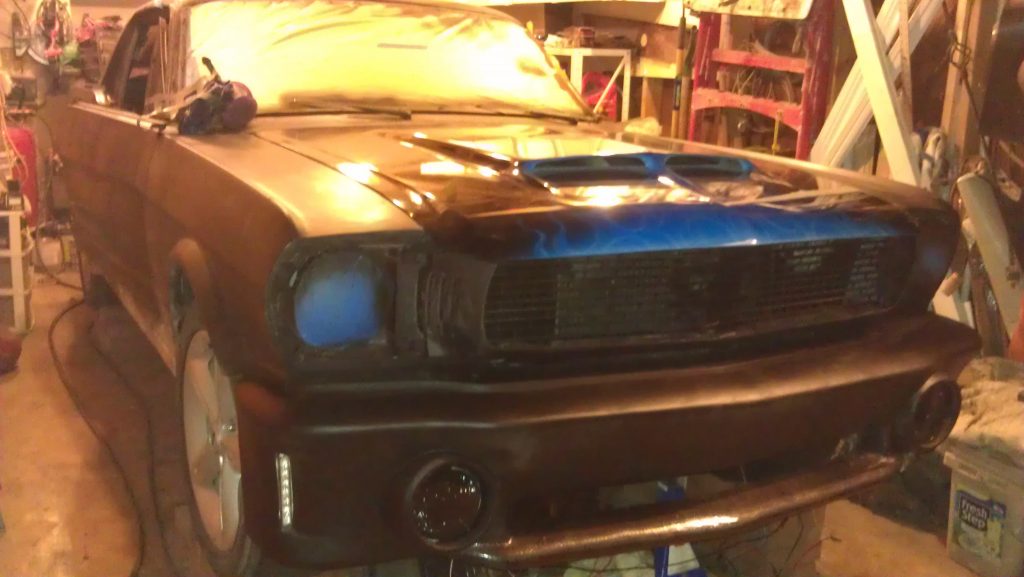 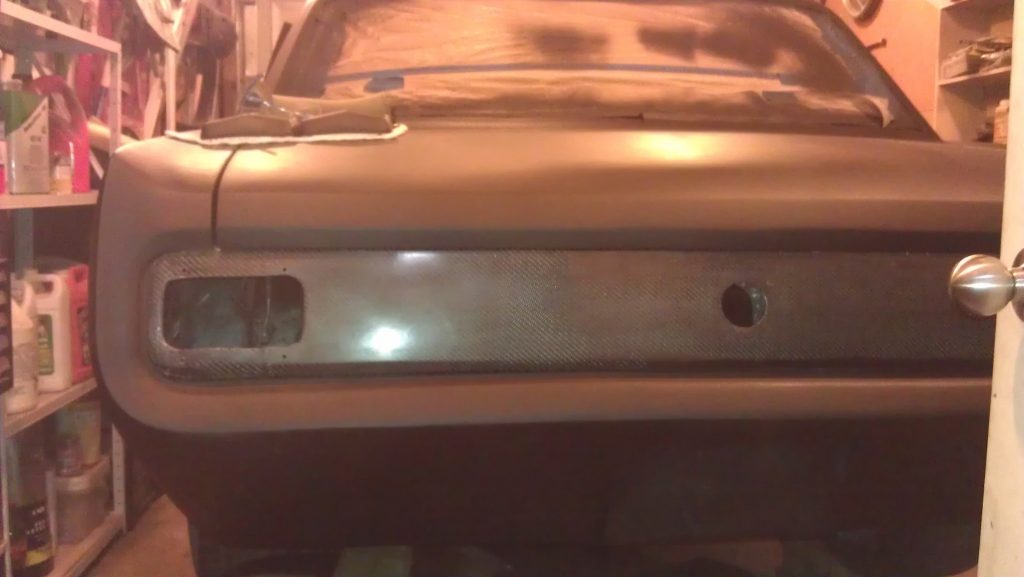 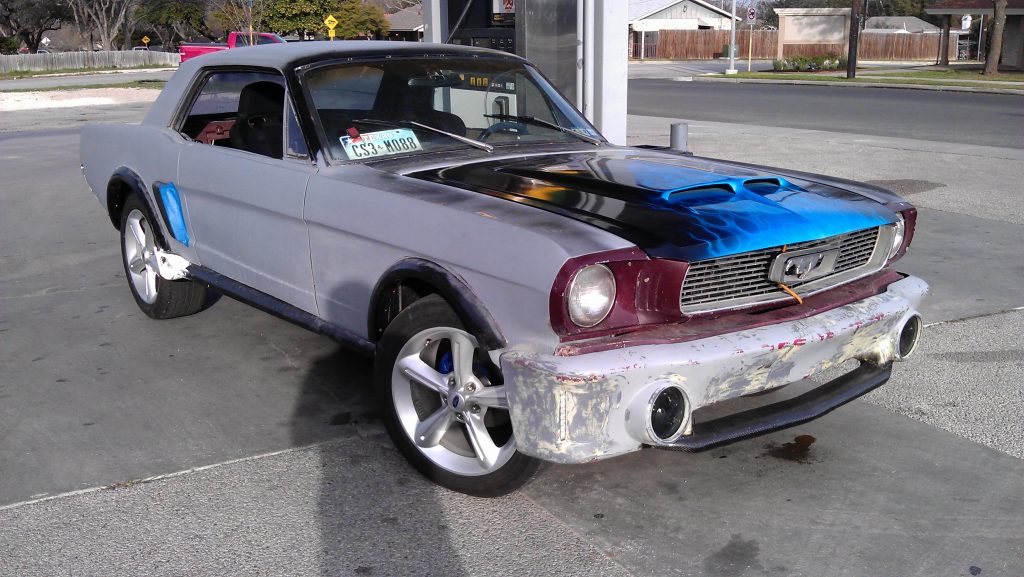 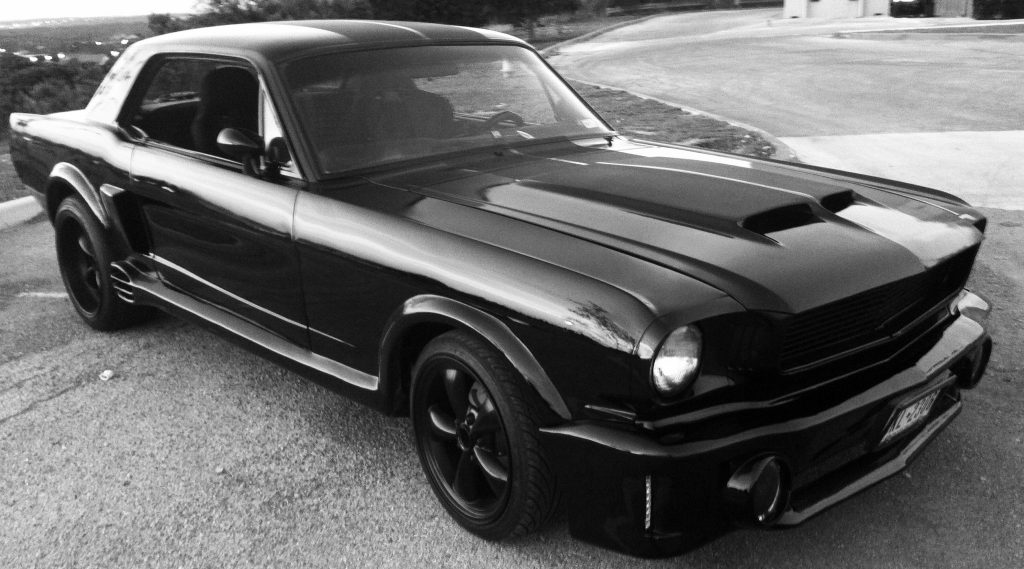