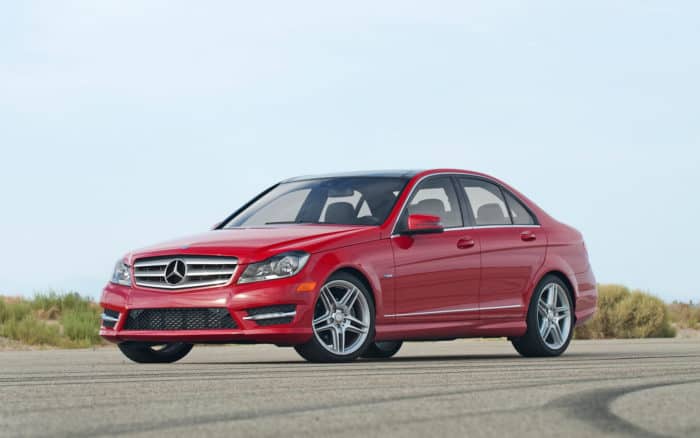 Luxury cars are the first place that manufacturers equip their latest technology and comfort features. They have great rides and most have pretty powerful engines, too. Unfortunately, all of that tech, comfort, and power come at a premium, making new luxury cars difficult to afford. When you are looking for cheap luxury cars, you have to accept that you will need to buy a used car. While that will leave you with new-at-the-time tech, you do not have to sacrifice ride quality, comfort, or engine output.

Being average car buyers here at Gearheads, we thought about what cheap luxury cars really were. We wanted a list of cheap luxury cars that are affordable, but not so inexpensive that you have to worry about the rust holding the thing together as you drive. To that end, we defined our list of cheap luxury cars as having an average retail price of less than $15,000 (U.S.), but looked for the most recent model year that would meet that price point. We arrived at the retail prices we quote by taking the average between the value on the Kelley Blue Book website and the value on NADA Guides’ website for cars in ”Good” condition. The sites are KBB and NadaGuides. And, without further ado, here is our list of 15 cheap luxury cars. As an aside, the list is in no particular order of value or quality. 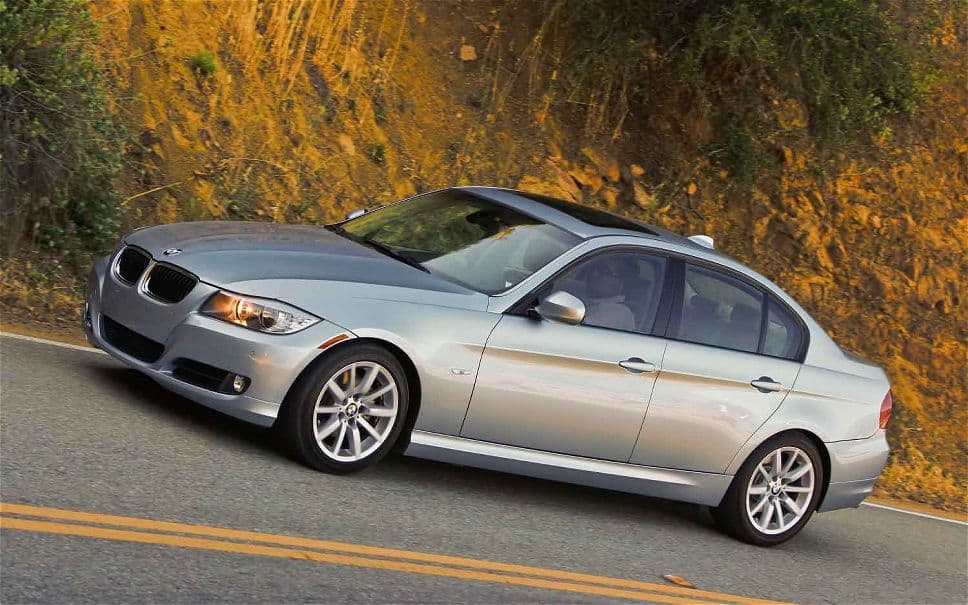 Before the BMW 2-series was introduced in 2013, the 3-series was the best option for those shopping for cheap luxury cars. Granted, the 1-series is less expensive, but the 1-series lacks a few things in the tech and ride comfort departments. 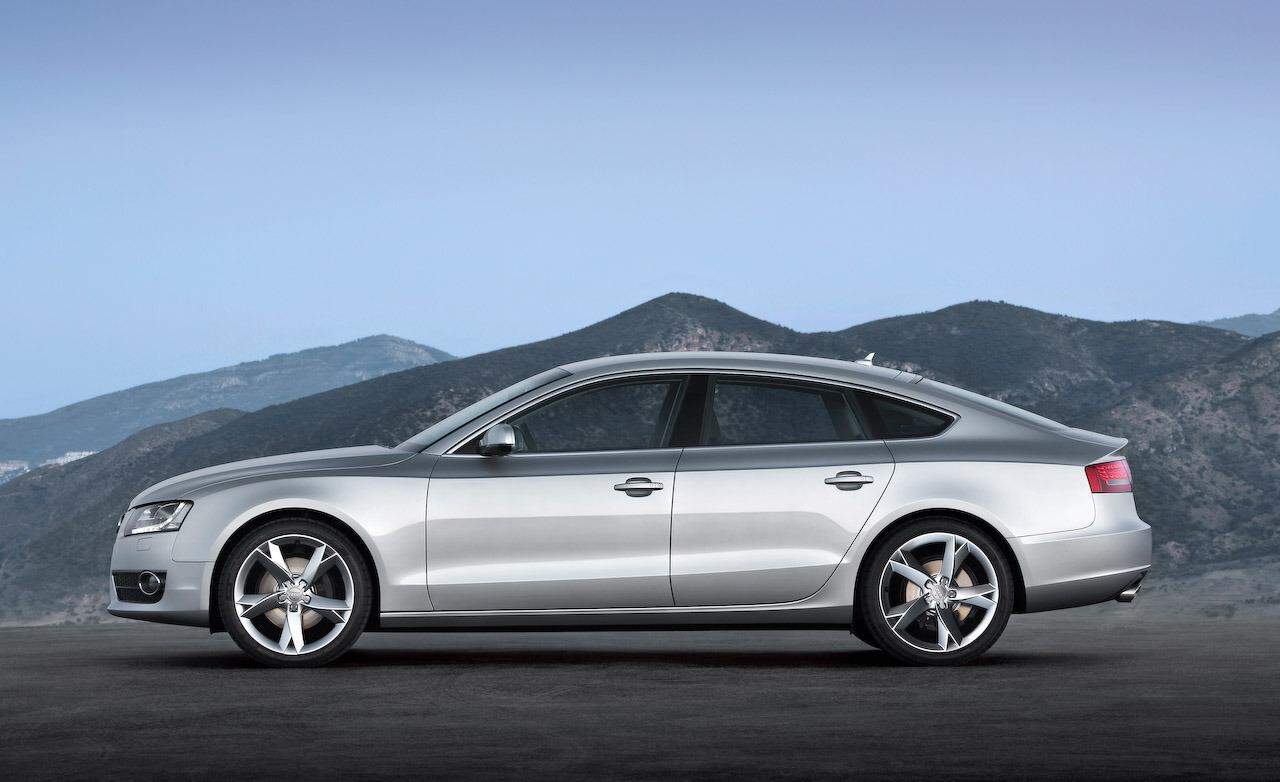 Audi makes quite a few fun cars. One of the best to look for when shopping for cheap luxury cars is the A5. To be specific, to fit our price tag, we are talking about the 2010 Audi A5 with the 2.0T Premium trim package. This trim level gives you a coupe with a 2.0L turbocharged four-cylinder powerhouse and Audi’s amazing AWD system that has been thrilling buyers for decades. Tech wise, the A5 is a step up from the A4 Quattro and has many of the same features found in a 2010 A6. 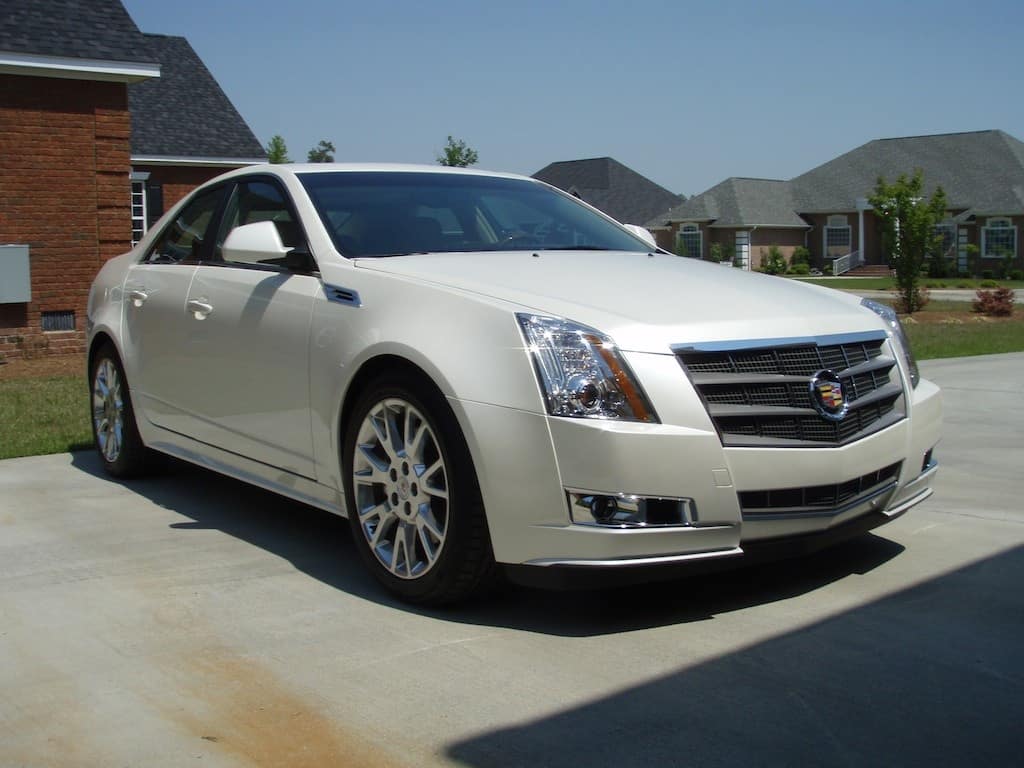 No list of luxury cars, let alone cheap luxury cars, is complete without a Cadillac. The legendary automaker has been building some of the highest quality luxury cars in the world since its inception in 1902.

Cadillac unleashed the CTS onto the North American market in 2003. The line is powered by a variety of great V6 engines, but our favorite is the 3.6. That is why we researched the price of a 2010 Cadillac CTS 3.6 Sedan. This package features a powerful 3.6L V6, AWD, and all of the standard tech and comfort features available in the CTS line for 2010. You should be able to find this model on a dealer’s lot with 85,000 miles on it for less than $12,000. 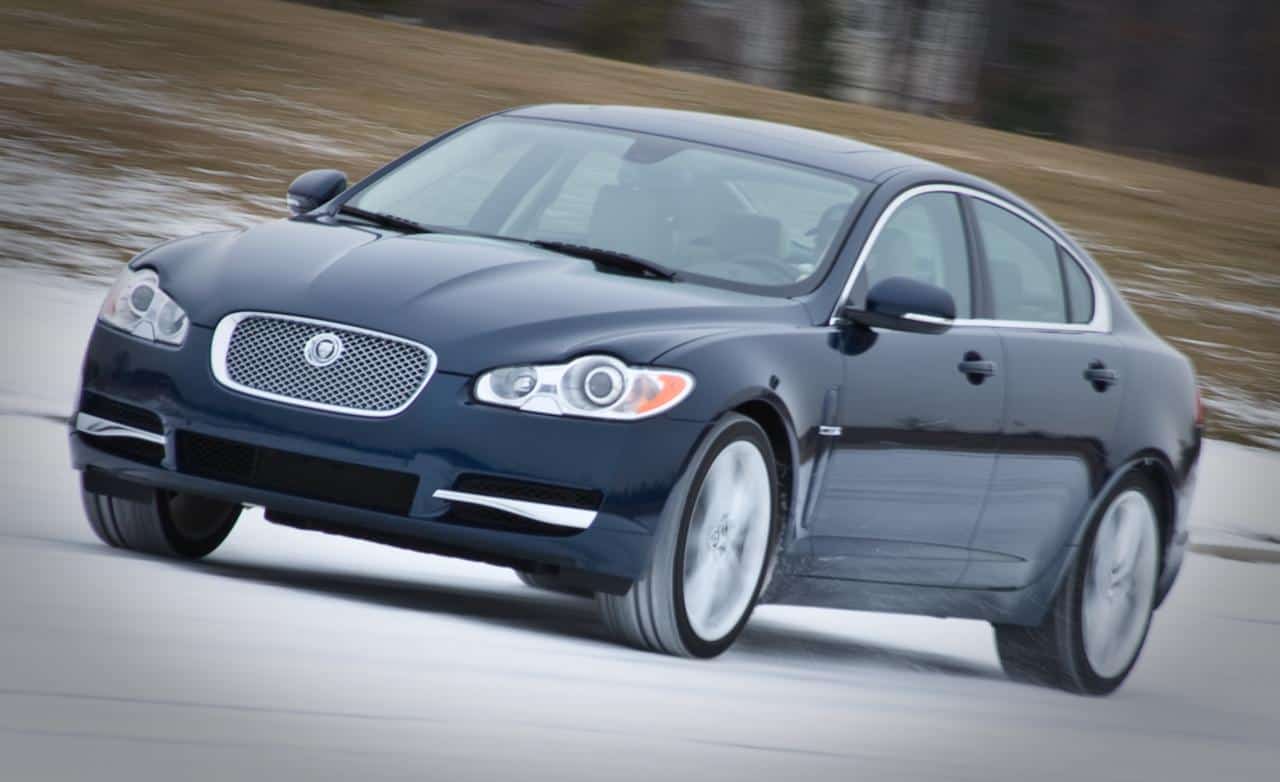 The name Jaguar oozes premium quality, performance, and comfort. Finding one on a list of cheap luxury cars may be quite surprising. To fit our price guideline, we found the 2010 Jaguar XF Premium.

This trim level features a thrilling 5.0L V8 mated to a durable 6-speed automatic gearbox. The XF is a sneakily powerful family sedan whose direct-injected engine creates 385 hp and 380 lb-ft of torque. To make it even more interesting, you should be able to find a 2010 Jaguar XF Premium with less than 85,000 miles sitting on a used car lot for just under $14,000. 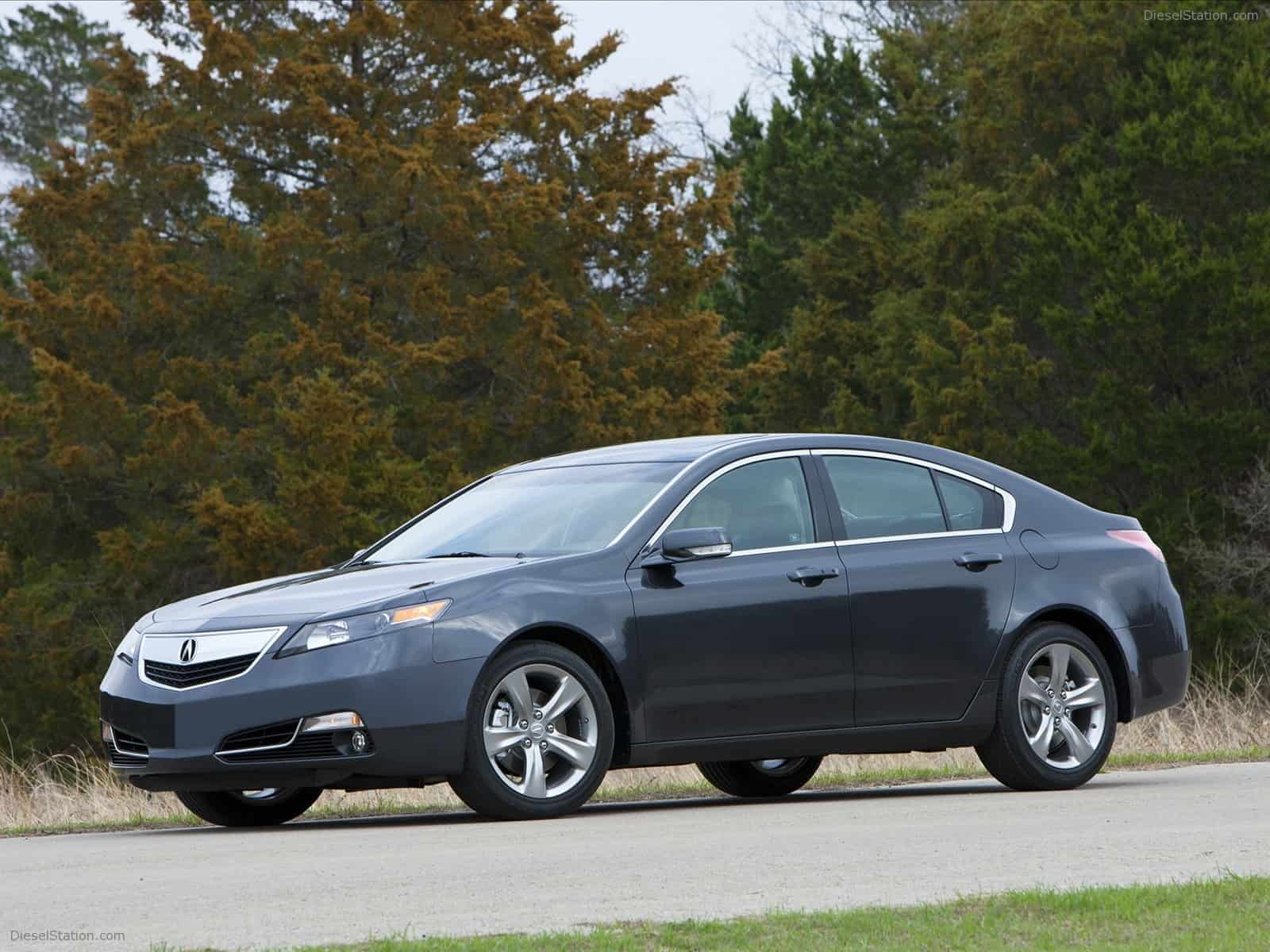 We have all seen the Acura TL and thought ”Wow.” These are sharp cars and are chock full of luxury and tech upgrades. To find the best car possible and still meet the price point we set for cheap luxury cars, we are looking at a 2012 Acura TL SH-AWD. The AWD is thrown in because they are so much fun to drive. 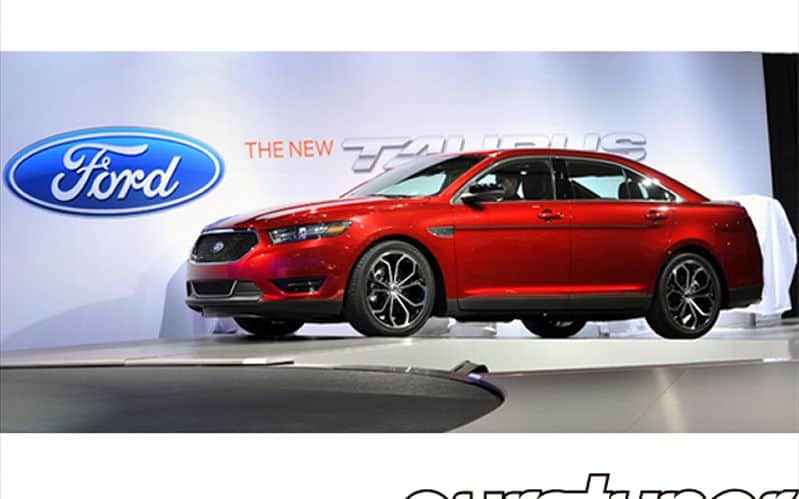 When Ford discontinued the Five Hundred in 2007 it was left without a full-size car or a model that could remotely be considered a luxury car. To remedy that, Ford turned to the Taurus. The Taurus had been a mid-size economy car for many years, but Ford made the car more spacious and added many luxury features.

We didn’t want to add a Ford Taurus to our list of cheap luxury cars unless it was a fun version. That is why we researched the 2011 Ford Taurus SHO. For 2011, the SHO package includes a a twin-turbo V6 capable of 365 hp and 350 lb-ft of torque. The interior offers keyless entry and start, a navigation system, a backup camera, and parking sensors along with heated/cooled leather seats. As crazy as it may sound, you can find a 2012 Taurus SHO with less than 75,000 miles for sale in the $14,000 neighborhood. 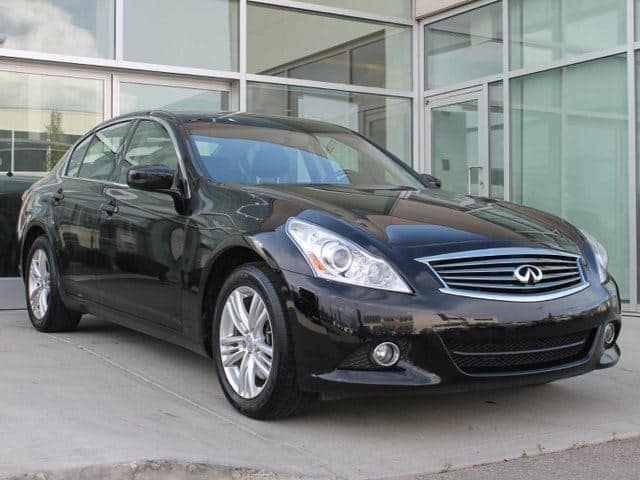 Infiniti sedans offer a large number of amenities and are often thought of as being far too expensive to ever make a list of cheap luxury cars. We wanted to get the most bang for our buck, so we are looking at the 2012 Infiniti G37x Limited Edition.

For 2012 the G37x Special Edition is powered by a 3.7L naturally-aspirated V6. The engine is capable of 328 hp and 269 lb-ft of torque. Tech and comfort options include keyless entry and start, a nav system, Bluetooth, a backup camera, heated leather seating, and a moonroof. Not bad when you consider that a 2012 Infiniti G37x Limited Edition with fewer than 80,000 miles should only set you back $14,250. 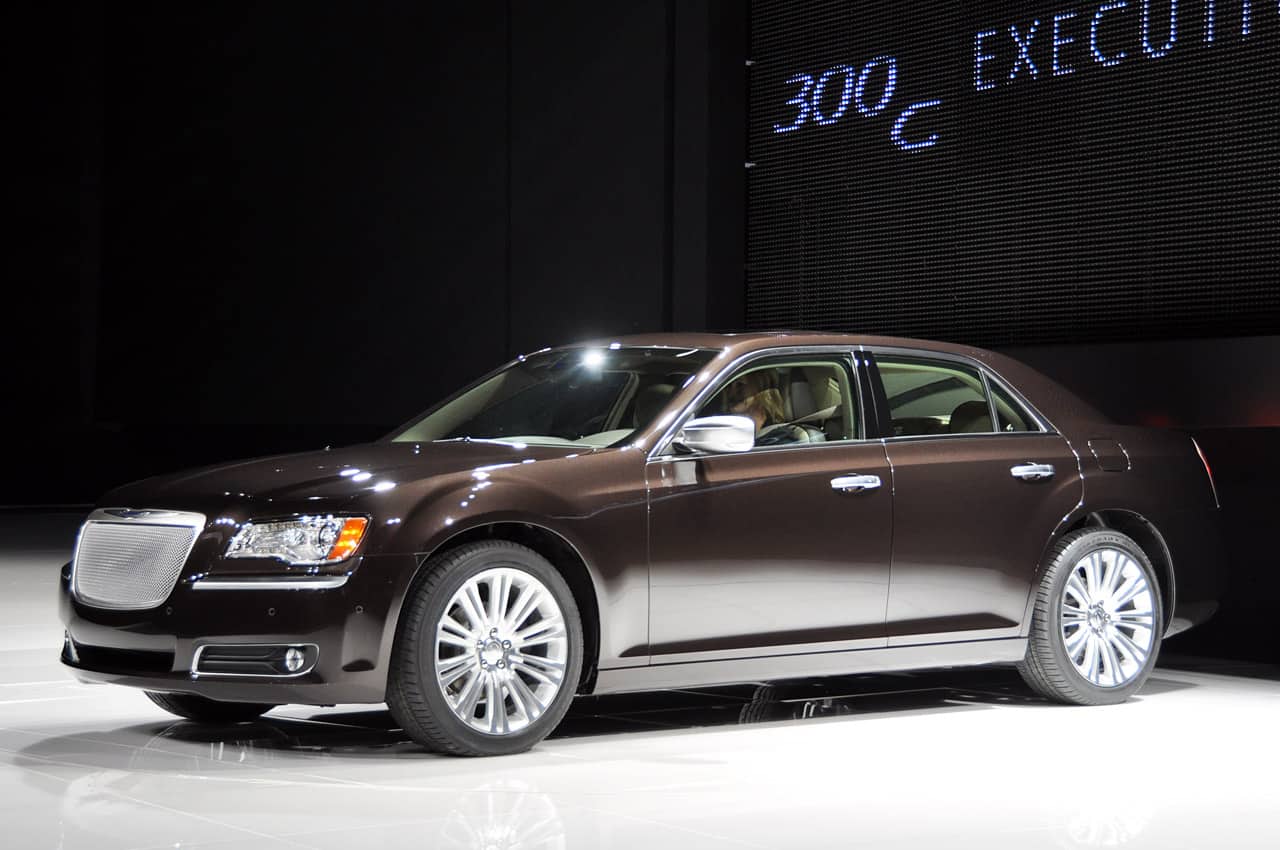 The Chrysler 300 is a great option if you are shopping for cheap luxury cars. It is often overshadowed by the likes of Cadillac and Acura, but the 300 offers many of the same amenities and similar power output.

To find a car with the most tech and comfort features for our price point we are looking at a 2012 Chrysler 300C Luxury Series. For 2012, that car is powered by a 5.7L Hemi V8 paired to a five-speed automatic with AutoStick. The powerplant produces 363 hp and 394 lb-ft of torque; more than enough power to outpace most other cars on the road. When you are inside, you will be sitting on heated/cooled leather. Other amenities include keyless entry and start, navigation, Uconnect, Bluetooth, a premium sound system, and a backup camera. This version pushes our price point, but still comes in around $14,500. 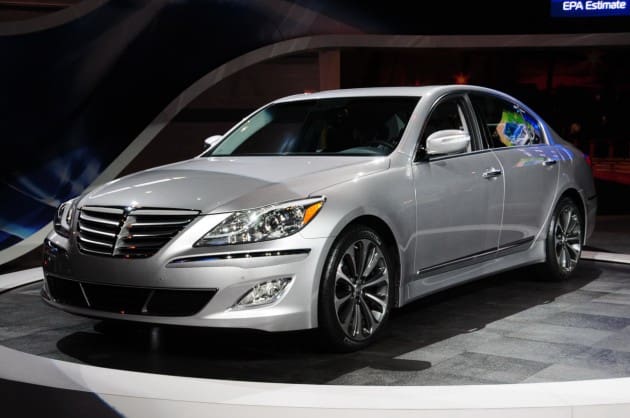 Unless you do a lot of research, you may not even be aware that Hyundai makes a luxury car. That is one of the reasons that the luxury Genesis sedan sold so slow and can sneak onto our list of cheap luxury cars.

Specifically, we are looking at a 2012 Hyundai Genesis 4.6 Sedan. This version of the Genesis is powered by a 4.6L V8 capable of 378 hp and 328 lb-ft of torque. Standard equipment includes adaptive cruise control, keyless entry and start, nav system, the Lexicon premium sound system, parking sensors, a backup camera, heated/cooled leather seating, and a moonroof. Not too shabby, for a car priced around $14,200. 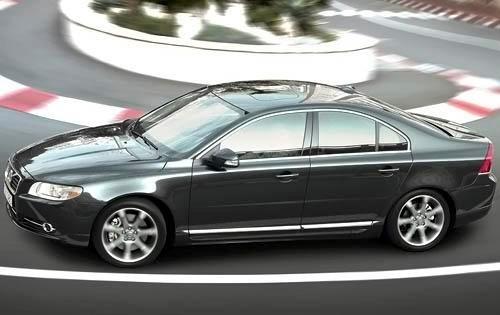 The Volvo name has long been associated with austere, but extremely safe vehicles. That is quite unfortunate because it leads many buyers shopping for cheap luxury cars to exclude the automaker out of hand.

One of the best luxury cars that Volvo has to offer is the S80 sedan. The S80 is normally powered by a turbo four-cylinder engine that is quite competent. We think that the six-cylinder in the T6 model is a better engine, though. The S80 has a tendency to hold its value quite well, so we had to fall back to a 2010 model to find an S80 T6 that fit into our pricing guideline. The 2010 Volvo S80 T6 is powered by a 3.0L turbocharged six that is paired to a six-speed Geartronic transmission. The engine produces 281 hp and 295 lb-ft of torque. Those are very nice numbers when you consider that Volvo cars feature a great AWD system and are often considered to be among the safest in the world. 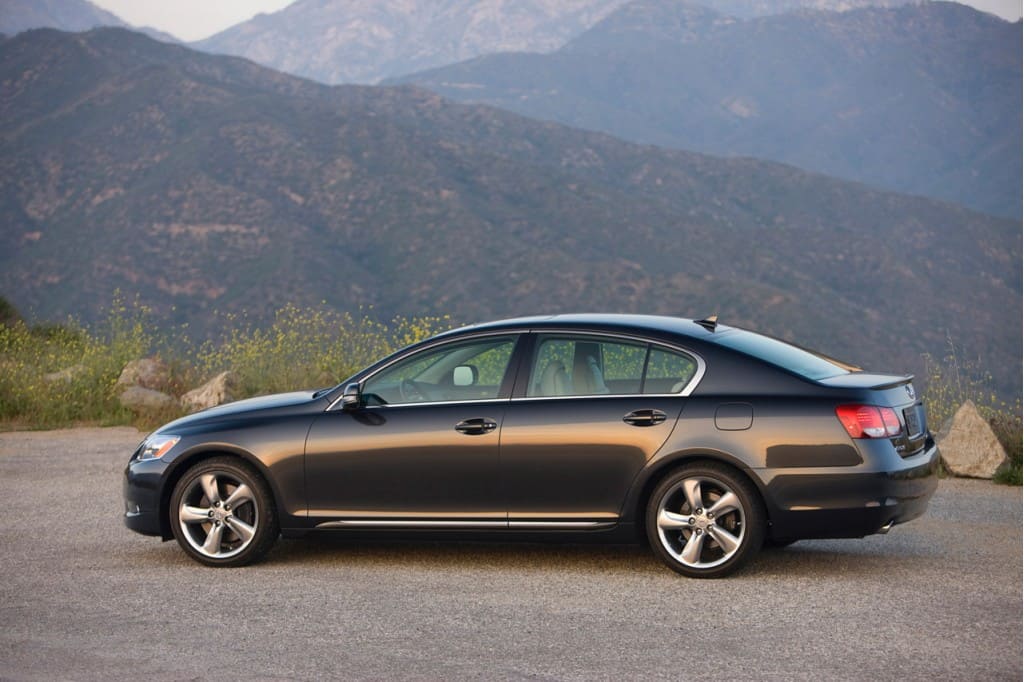 Toyota’s luxury division has been building great luxury cars for three decades. One of the best is the Lexus GS. Granted, the Lexus LS is a bigger car and offers additional comfort and tech options, but it is impossible to fit one into our price group.

Despite being the little cousin of the LS, the Lexus GS offers the vast majority of the comfort and tech found in the LS line. To hit our price point we are looking at a 2010 Lexus GS 350. This model is powered by a 3.5L V6 that is capable of 303 hp and 292 lb-ft of torque. That is more than enough power to easily tackle any long road trip. In addition to having plenty of power, a 2010 GS 350 is normally equipped with a premium sound system, navigation, Bluetooth, Lexus Enform, heated leather seating in the front, and a moonroof. You should be able to find a 2010 Lexus GS 350 priced right at $15,000 in your area. 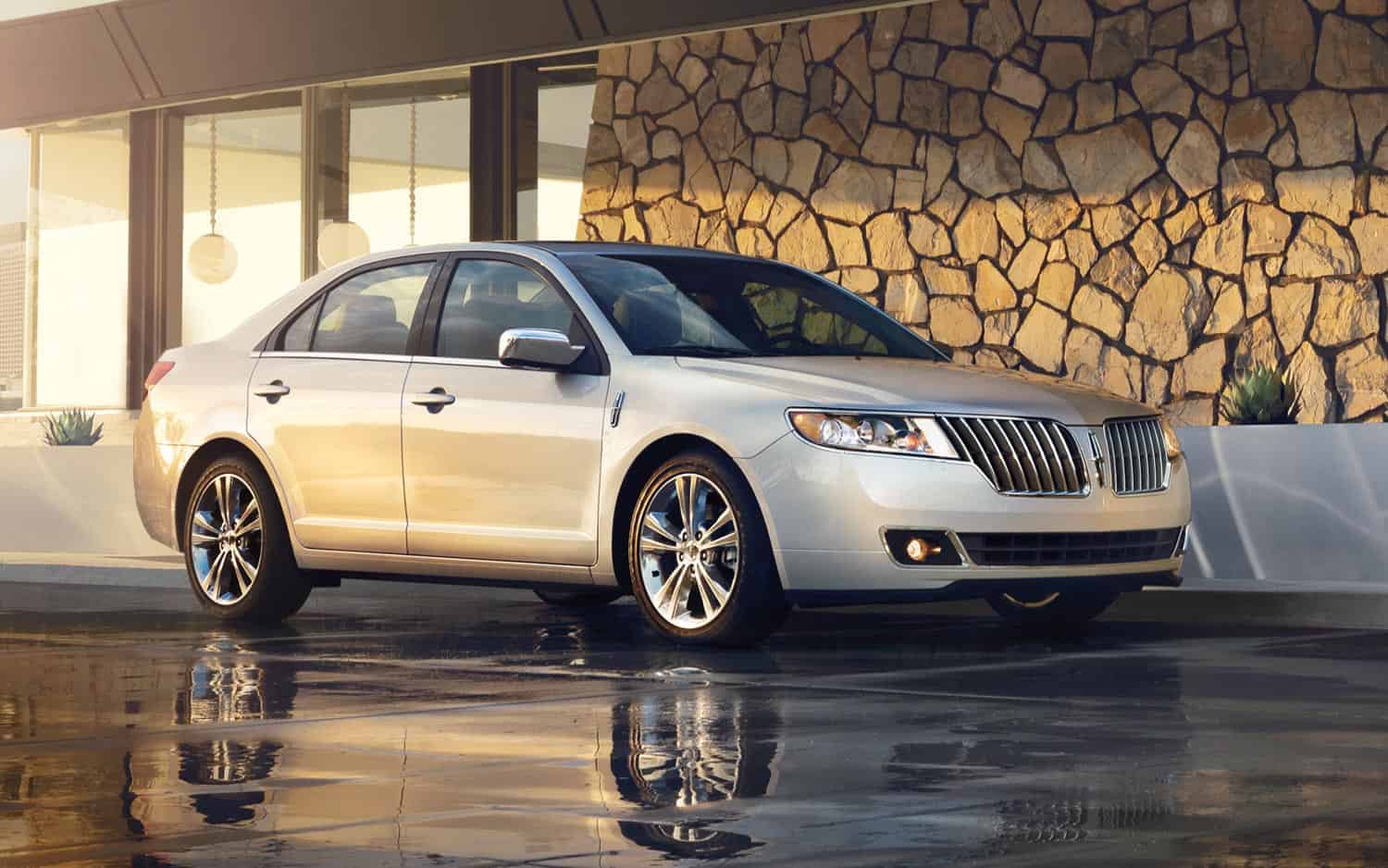 With all of the excitement surrounding the return of the Lincoln Continental, the smaller Lincoln MKZ is somewhat lost in the shuffle.

A 2012 Lincoln MKZ with the Executive trim package equipped is powered by a 3.5L V6 that offers 263 hp and 249 lb-ft of torque. The output is more than adequate from a car that also offers 27 mpg on the highway. When equipped with the Executive package, a 2012 Lincoln MKZ features keyless entry, THX II sound system, parking sensors, and heated/cooled leather seating up front. It also fits nicely into our price point at just $12,250. 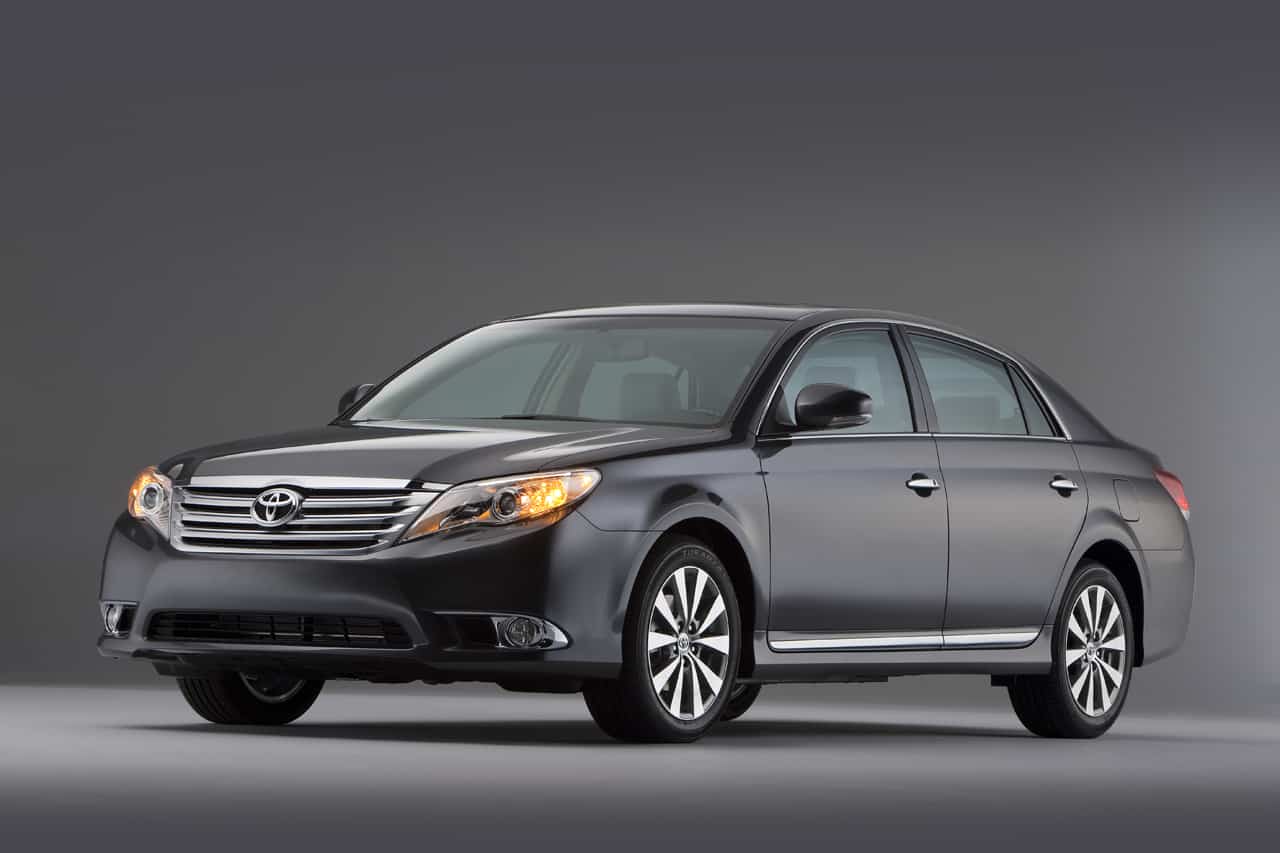 The Toyota Avalon often flies under the radar when it comes to cheap luxury cars. Considered the flagship automobile in Toyota’s North American stable, it is a great luxury option that is fairly easy on the wallet when bought used.

A 2011 Toyota Avalon Limited is powered by a durable 3.5L V6 that is mated to a smooth-shifting six-speed transmission. The engine puts out a modest 268 hp and 248 lb-ft of torque, but packs legendary Toyota dependability into every pony. Drivers are treated to keyless entry and start, a JBL Synthesis sound system, Bluetooth, heated/cooled leather, and a moonroof. All of this for less than $14,000. 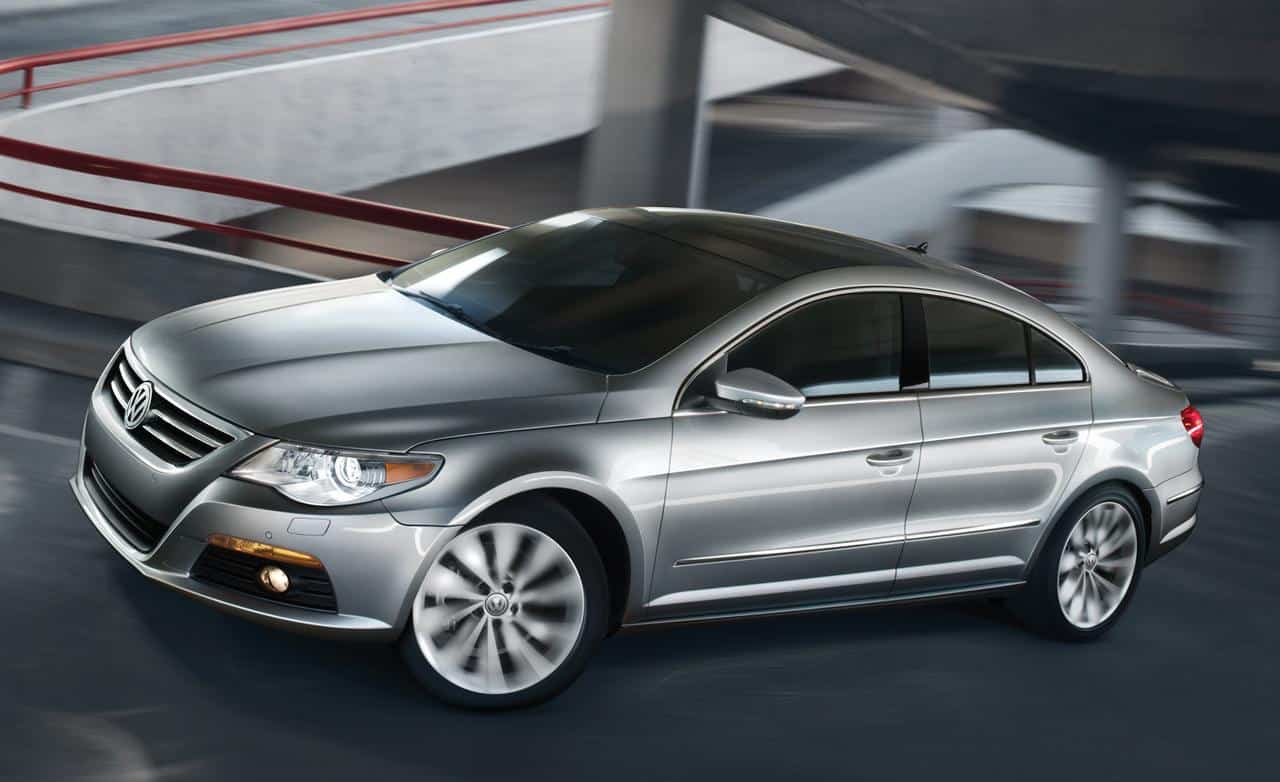 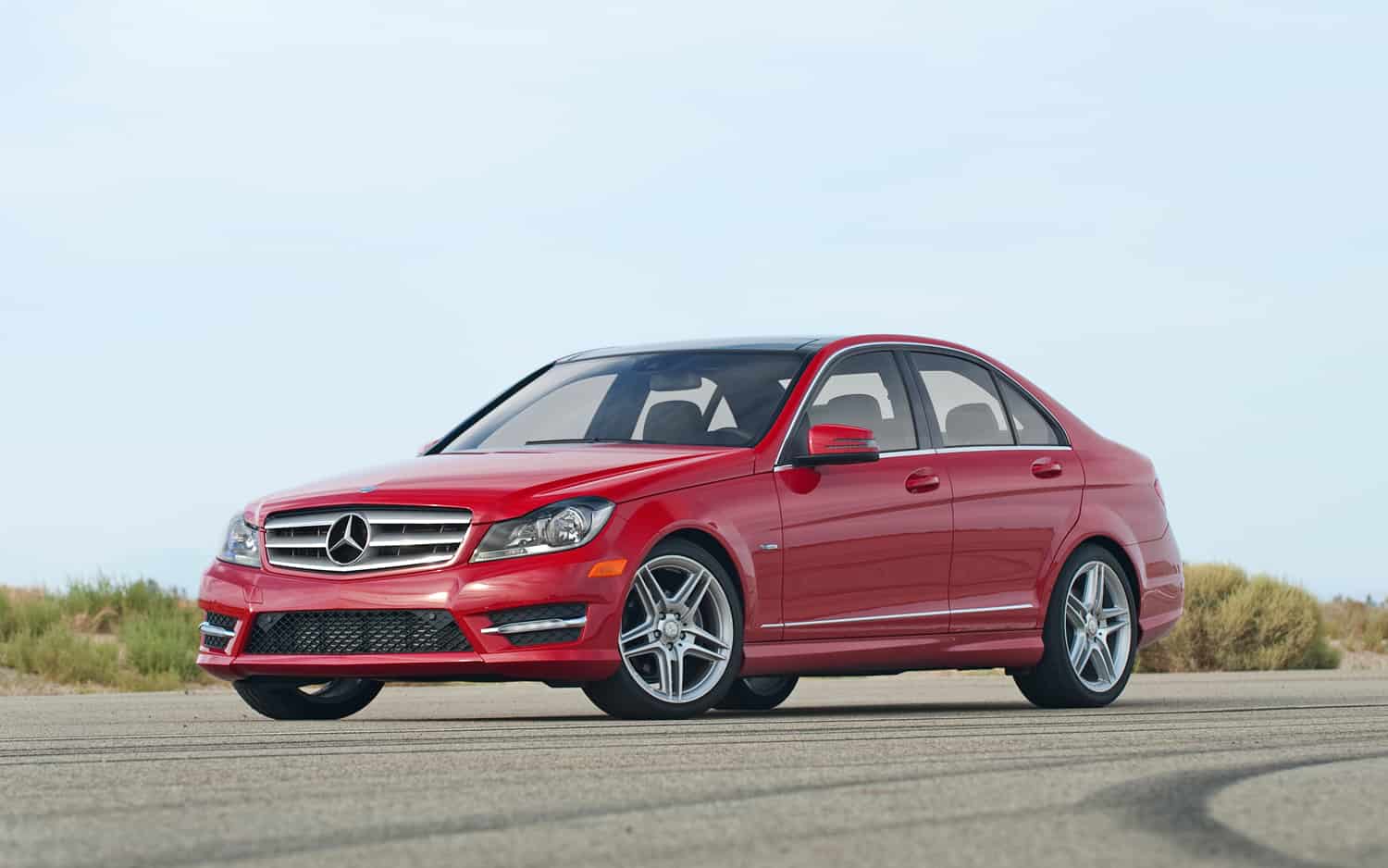 No list of cheap luxury cars would be complete without an offering from Mercedes-Benz. Keeping our price point in mind, we came up with a 2012 Mercedes-Benz C250 with the Luxury package equipped.

A 2012 C250 is powered by a 1.8L turbocharged four-cylinder that pushes out 201 hp and 229 lb-ft of torque. Those numbers sound low until you consider the low curb weight of the C250. Every C250 offers the driver-centric interior that Mercedes-Benz is famous for and a C250 with the Luxury package offers keyless entry, an anti-theft alarm, a premium Harmon-Kardon sound system, Bluetooth, and a moonroof. A 2012 Mercedes-Benz C250 with the Luxury trim normally retails for around $14,700.