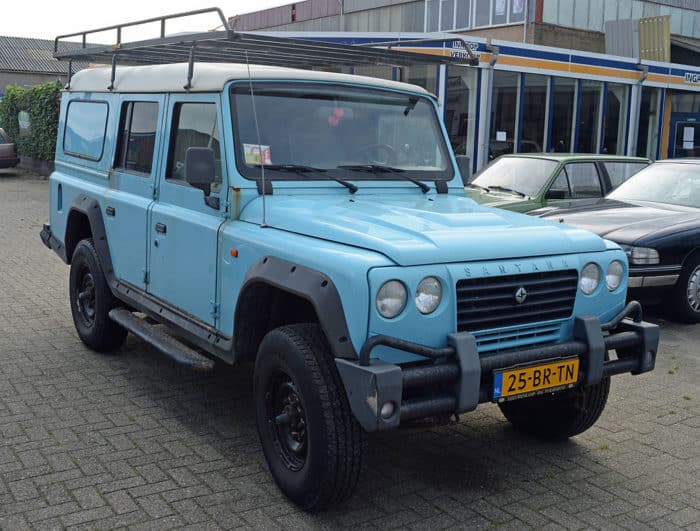 What do you think are the most copied cars in the world? Some you might expect, but others we bet you hadn’t considered.

Long before the Chinese auto industry began producing unauthorized copycat cars like the ‘Landwind X7’ Range Rover rip-off and the blatantly MINI-esque ‘Lifan 320’ – which would require a whole separate article –, licensed lookalikes of popular models were being produced in far-flung locations worldwide.

If imitation is indeed the sincerest form of flattery, these vehicles – already big sellers in their own rights – received the ultimate compliments. We took a look at some of the world’s most copied cars.

Autoweek has described Jeep as “the industry’s most copied brand.” In its nearly 80-year history, the American marque (now a subsidiary of the Italian-American Fiat Chrysler Automobiles corporation) has spawned countless imitators, authorized and otherwise. Jeeps were built under contracts in Japanese Mitsubishi factories, Korean Kia plants, in South America, and even in Egypt.

A whole slew of vehicles, while not straight-up copies, are clearly heavily indebted to the Jeep concept. A U.S. military jeep captured in the Philippines during World War II provided the blueprint for the similar Toyota AK10. When U.S. government sensed a demand for a military light utility vehicle during the Korean War, it commissioned Toyota to produce the Toyota “Jeep” BJ. The Willys Company, which produced the original Jeep, claimed trademark violation and so Toyota switched to the “Land Cruiser” name (itself inspired by Britain’s Land Rover), which endures to this day.

The first Land Rover prototype, in 1947, was built on a jeep chassis. Ironically, Land Rover went on to become Jeep’s chief competitor. The Jeep CJ series also inspired everything from the International Scout and the original Ford Bronco in the 1960s to Japan’s Daihatsu Rocky and Suzuki Samurai in the ‘80s.

When then-Jeep parent company AMC ended a licensing arrangement with South Korea’s Ha Dong-hwan Motor Workshop in 1978, the company (now called SsangYong) continued building uncannily Jeep-like vehicles regardless. In 2011, SsangYong was taken over by India’s Mahindra and Mahindra, which itself has a history of Jeep imitation. Since 1947, Mahindra has manufactured Jeep-like off-road vehicles for the Indian market under contract with Willys. But in 2017 it crossed a line by announcing the almost Jeep-identical Roxor off-road-only side-by-side for the American market. The Roxor is even assembled at a Mahindra
plant near Detroit. In June, the U.S. International Trade Commission ruled that the Roxor infringed upon Jeep’s trade dress. Mahindra responded by mildly reconfiguring their creation to look slightly less like the classic Jeep CJ.

And, yes, there’s an unlicensed Jeep copy made in China. The extremely Jeep Wrangler-ish BAIC BJ40 has been produced since 2013, and is even sold just across the U.S. border in Mexico.

Land Rover may have originally been inspired by the jeep concept, but the British company has since gone on to be a much-copied brand itself. Just last year, Jaguar Land Rover won a landmark court case against Chinese company Jiangling Motors for selling the aforementioned Landwind X7, which is a direct (and much cheaper) imitation of the Land Rover Evoque.

Land Rover itself has plants in four countries outside of its native UK. As well as dedicated factories in Slovakia, Brazil, and India, its Discovery Sport and Evoque models are also built in China under a joint venture with Chery. Land Rovers have also been assembled under license in countries including Turkey (by Otokar), Iran (Morattab), Belgium (Minerva), Germany (Tempo), Brazil (Karmann), and in Spain, by Santana Motors. Santana, which began assembling Land Rovers from knock-down kits under license in 1958, went much further. Within a decade it was developing its own versions of Land Rover models.

The relationship between the two companies became so close that Santana changed its name to “Land Rover Santana.” Santana actually made many improvements to Land Rover models at times when Land Rover itself was too cash-strapped to do so. It even supplied its own knock-down kits to Costa Rican and Moroccan markets, and took over promoting the Santana and Land Rover brands in Central and South American, and in Africa.

The agreement between Land Rover and Santana ended in 1983, but the latter continued to purchase knock-down Land Rover kits. Iran’s Morattab bought the entire production line for Santana’s Land Rover-like vehicles, including the Defender-based PS-10 (as the Morattab Pazhan), in 1994. Following collaborations with Suzuki and then Iveco, the shrinking Santana went out of business altogether in 2011.

One of the first cars to marry sports car performance to sedan passenger capacity, Fiat’s supremely boxy 125 sold more than 600,000 units between 1967 and 1972. But it was also much copied in other countries, continuing into the 1990s. A somewhat simplified 125, including a station wagon, was produced in Poland as the Polski Fiat 125p for nearly a quarter-century, until 1991. The 125p was itself copied in Yugoslavia/Serbia as the Zastava 125, and in Egypt as the Nasr 125. Fiat-Concord and then Sevel built the 125 in Argentina, including a wagon (the “Familiar”) and the uniquely Argentine “Multicarga” pickup. Copies of the 125 were also manufactured in smaller quantities in Chile, Colombia, and Morocco.

Fiat’s tiny 126 was also widely copied. In fact, the majority of these rear-engined city cars were actually produced in Poland as the Polski Fiat 126p. It became probably Poland’s most popular car in the 1980s, and while the original 126 ceased production in 1980, it continued to be produced in Poland until 2000. The 126 was also manufactured under license by Zastava in Yugoslavia, and briefly assembled by Steyr Puch in Austria.

Russian automaker AvtoVAZ was formed in collaboration with Fiat in 1966. Its first product was a more rugged version of the big-selling Fiat 124 sedan. This was sold under the Zhiguli brand within Russia, and exported under the Lada name. Basic, but very affordable, the Lada proved popular in many global markets, despite ridicule over build quality.

The mildly updated Lada Riva version, including a station wagon, sold well in Eastern Europe and also appeared in the UK, the Netherlands, New Zealand, and Canada. Incredibly, it remained in production variously in Russia, Ukraine, and at Suzuki’s factory in Egypt until 2012.

One of my abiding memories of growing up in England was riding around in the back of my dad’s Hillman Hunter wagon. Launched in 1966, it was sold in various configurations and multiple names, including under the Singer, Sunbeam, Humber and Chrysler badges. The Hunter was also assembled from knock-down kits by Chrysler Australia, and in New Zealand by Todd Motors.

Production of the original Hunter ceased in 1979. So I was astonished to see thousands of them crowding roads when I visited Iran in 2008. In fact, what I saw was the Iran-made Paykan. Iran National began assembling Hunters from kits in 1966, and the resulting Paykan became known as Iran’s national car. Full local production, using Peugeot 504 engines and suspension, began in 1985. The Paykan sedan ceased production in 2005, but an Iranian pickup version, the Bardo,
was still being made in Tehran until 2015.

Produced as a sedan, wagon, and van, the oddly angular Renault 12 sold 2.5 million units between 1969 and 1980. But almost as many copies – nearly 2 million – were also made by Romania’s Automobile Dacia, who continued churning it out until 2006. They even produced their own range of pickup versions, which alone sold 319,000. Truly a global car, the 12 was (appropriately) built in at least a dozen countries, including by Oyak-Renault in Turkey, and in Brazil as the Ford Corcel and Ford Del Rey.

DKW is a German marque that is now part of Audi. But before its demise in 1969, DKW vehicles were also made in Brazil by local company Vemag. The DKW-Vemag Belcar looked like an odd cross-pollination of the VW Bug and Morris Minor, and there was also a wagon utility version, the Vemaguet.

Nearly 110,000 DKW-Vemag cars were produced between 1956 and 1967, when new owners Volkswagen phased out production in favor of building the Volkswagen 1600 in the old Vemag plant. DKW vehicles were also made in Argentina between 1960 and 1969 by IASF S.A., including the stylish Coupé Fissore.

The original Opel GT (1968-1974) is often assumed to be simply a two-thirds scale copy of the third-generation (C3) Chevrolet Corvette. But that’s not strictly true.

With Opel and Chevy both being General Motors-owned companies, it’s believed that the GT and C3 equally took design cues from the 1965 XP-755 “Mako Shark II” concept car, designed by GM’s Larry Shinoda. But whereas the Corvette comprised a fiberglass body on a steel frame, the Erhard Schnell-designed GT – which went on sale just a year after the C3 – used a steel unibody design.

The smaller, less gas-thirsty Opel GT was seen as a Corvette for the European market but, ironically, of the 103,000 produced more than 70,000 were sold through Buick dealers in the U.S.


8 Reasons Why The American Ford Mustang Is Better Than The E...
20 Car Insurance Secrets You Aren’t Supposed to Know
What Cars Do These 15 Hot Celebrities Drive?
What The @?#&! Were They Thinking? The Pontiac Aztek
8 Best Cargo Work Vans (And Which to Avoid)
Seven Slick '68 - '72 Chevelle Restomods