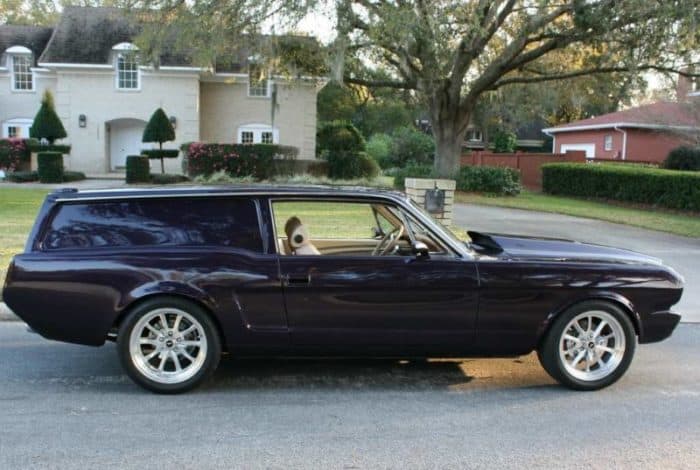 First off lets get started with a few extremely basic questions which could help anyone that has no previous knowledge, then we will get into our list which should be fun for anyone, expert or not.

What Is a Station Wagon?

Station Wagons are defined as having an area behind your 1 or more row of seats which can be accessed through the tailgate. From Woodies to full-size wagons, I’m sure we all have our favorites, especially among the classics but we have compiled a list of our winner for 20 different categories which you can read after we answer a few basic questions.

Station Wagons have reconfigured their interior with a fold down rear seat which allows for extra passenger space or storage which can be accessed via the tailgate.

I think It would be better to ask who does not make them but we have gone ahead and compiled a lost of manufacturers who currently make station wagons in the United States. You will find quite a few manufacturers make produce them outside of the USA.

Do They Still Make Station Wagons?

You bet they do, otherwise we couldn’t compiled the above list of current manufacturers. If you would like a power in your wagon we recently compiled a list of wagons with more than 400 HP.

Hell YES they are! If they weren’t why would we of gone through so much trouble to bring you this amazing list? If you are looking for more details on the classics then check out our list of powerful and affordable wagons from the 60’s.

How Did Station Wagon Get It’s Name?

They came from the train age and were called “depot hacks”, these were used help transport people and luggage. Model T’s were the first model of car to actually be known as a wagon and in the early years they were also known as suburbans or carryalls. In later days they have been called a variety of names such as Beach Wagon, Estate Cars, Shooting Brake, Hatchback, Crossover, Tailboard, or Wain just to name a few.

Which Modern Models Are Considered The Best Station Wagons?

There are plenty of contemporary station wagon models out there, with some of the best station wagons coming from the world’s biggest manufacturers. For example, the Volkswagen Golf Wagon, or Golf Sportwagen, is one of the best rated on the market. Other popular new car examples include the Volvo V90, Audi Allroad Quattro, Mercedes-Benz E-class wagon, and other less-traditional station wagon body style vehicles like the Land Rover Defender, Subaru Outback, and Alfa Romeo Giulia. Of all these new cars, the Volkswagen Golf Sportwagen is our favorite thanks to the option 4Motion All-Wheel Drive system, comfortable rear seats, and practical cargo volume. It would top our buyer’s guide list, for sure!

That’s quite enough on what Wagons are, lets get on to our list:

Strangest, Weirdest, Fastest, Longest, And Best Station Wagons Out There! 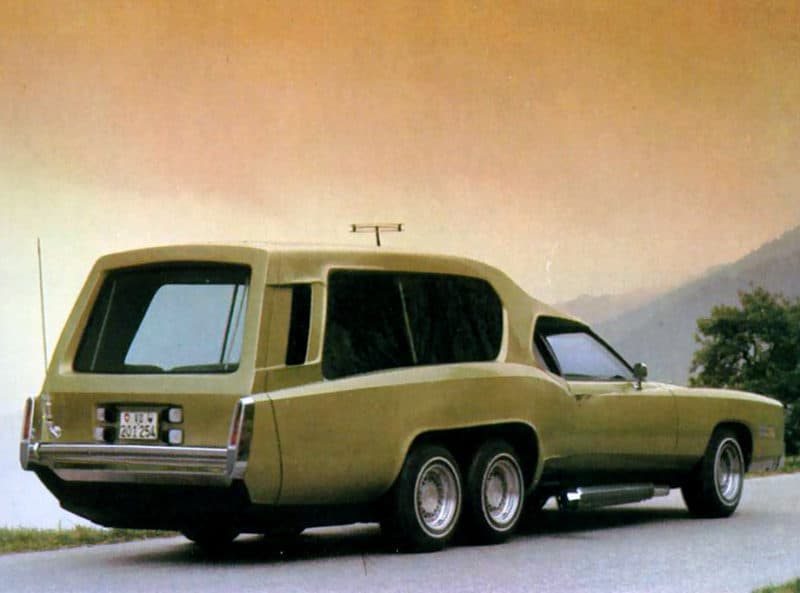 Did Cadillac Make a Station Wagon?

The TAG Sbarro Function Car was based on a lengthened Cadillac El Dorado and weighed over 3 tons. It was powered by a 350 HP 8.2 L V8 mated to a four-speed automatic transmission. Commised by the owner of Technique d’ Avant-Garde (as in TAG-Heuer watches) as a rolling office with four large armchairs, two telephones, a TV and a refrigerator. It also had fold-down office desks and wood paneling.

The Rare One Most of Us Would Want to Own: Intermeccanica Mustang Wagon 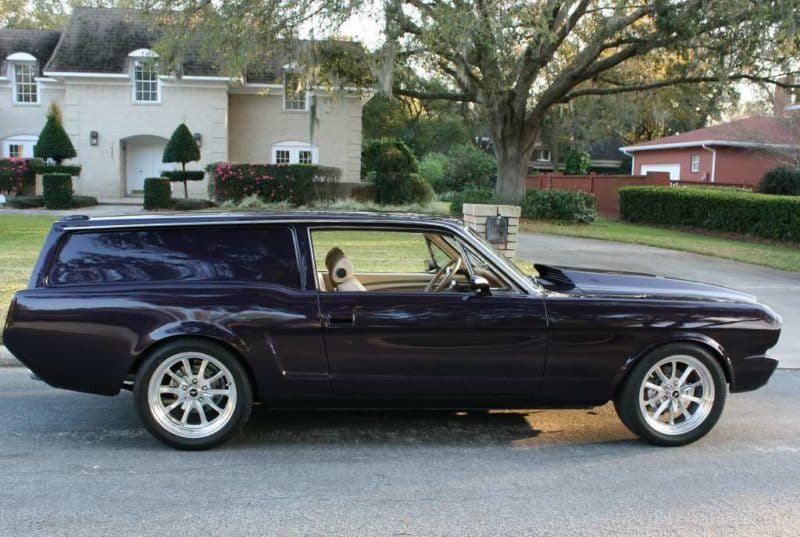 Did Mustang Make A Station Wagon?

Italian tuner Intermeccanica constructed and sold a wagon version of the Mustang after images of Ford’s prototype of their own wagon appeared. Since then there have been countless variations on the concept, like this very tasty panel wagon.

The First Chevy Nomad: Yes It’s Real and Made by GM 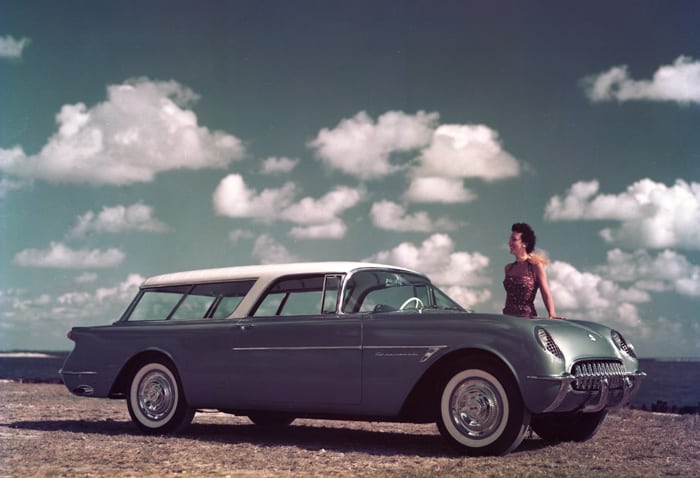 The 1954 Chevrolet Corvette Nomad concept, designed by Harley Earl and his GM design staff, was unveiled at the 1954 General Motors Motorama at the Waldorf-Astoria Hotel ballroom in Manhattan. To achieve the required wheelbase, the Nomad was built on a modified 1953 Chevrolet sedan chassis and was powered by the standard  Corvette powertrain of the era: 150 HP 6-cylinder engine with a 2-speed Powerglide transmission. This Nomad wagon had room for 6 passengers in two rows in an interior finished in blue and white leather with a fold-down rear seat. For the 1955 model year, Chevrolet would introduce the full-size “Bel-Air” Nomad for sale to the public. 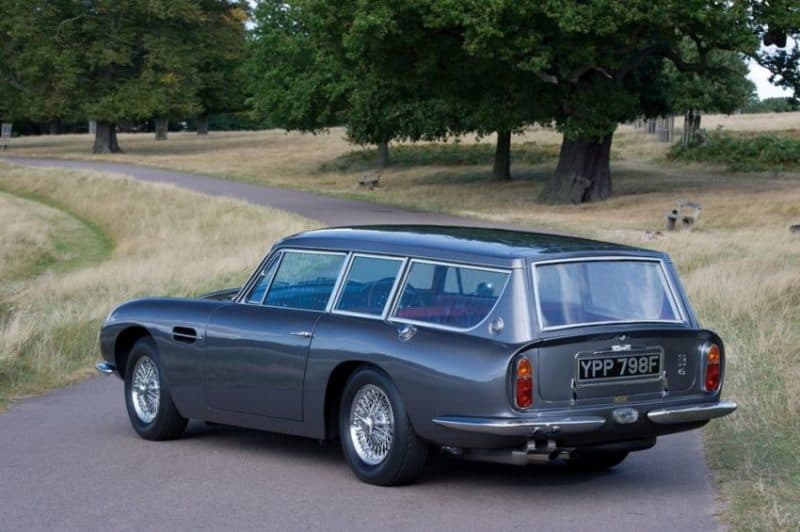 Don’t get nervous, a Shooting Brake is just a fancy term for a station wagon, like Cabriolet is for Convertible. Originally intended to carry hunters with their dogs and guns, the term has lost all relevance with cars like the Ferrari FF. And of course all good Bond fans know 007 drove a DB5. But if he needed to trade it in … 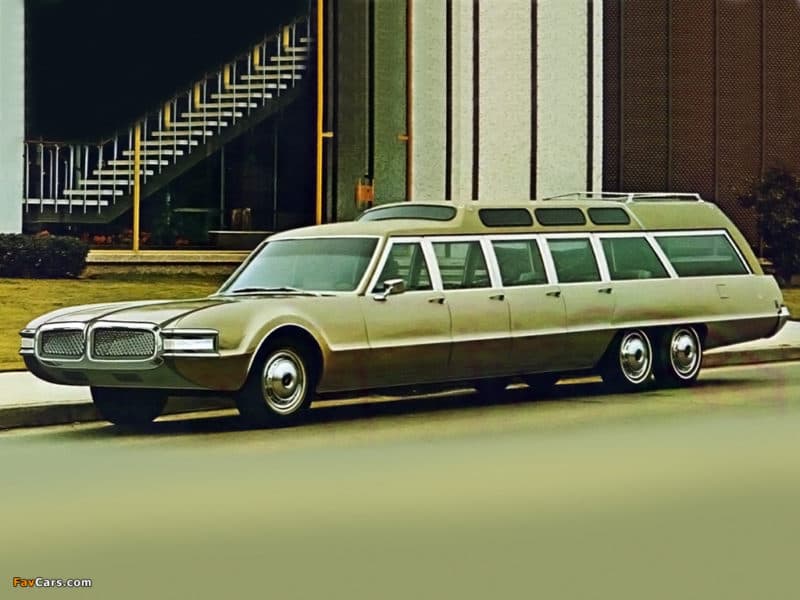 Based on a front wheel drive Oldsmobile Toronado platform, the American Quality Coach  Jetway 707 was 28′ long with a wheelbase of 185″, had 8-doors, seated twelve to fifteen, and required twin rear axles – the first stretch limousine known to use them. The Jetway 707 featured a raised roof, with sky-lights and a completely enclosed cargo space with a hinged rear door. 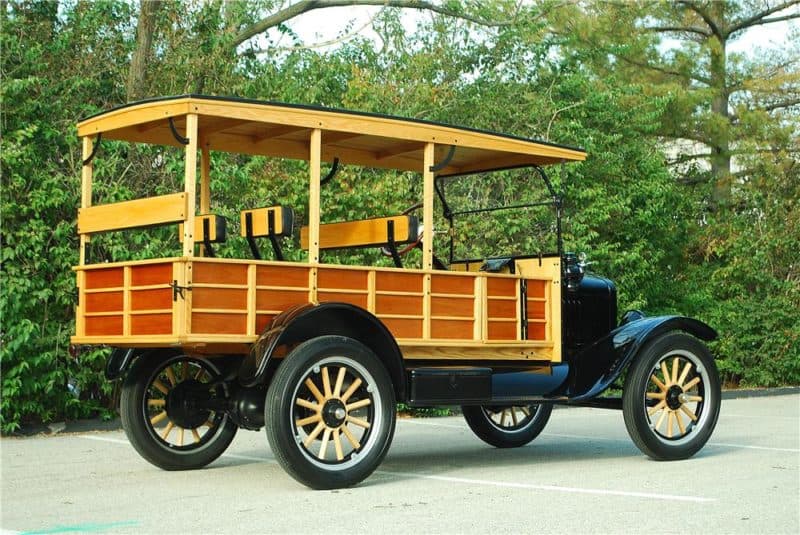 It’s generally agreed the first production station wagon at least produced in any sort of quantity) was the 1908 Ford Model T Depot Hack. Again, another term for Station as Depot refers to the train depot and Hack is a slang for a taxi, which would deliver train travelers to their hotels or homes.

The Last of The Real Woodies: 1953 Buick Estate Wagons 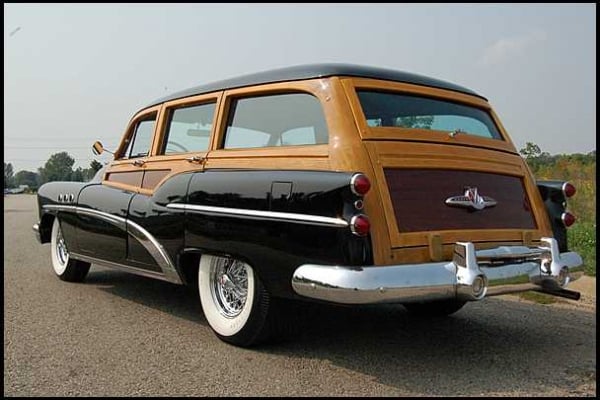 From the 1908 Model T Depot Hack until after World War II the bodies were often constructed – at least partially – of wood. The very last US built station wagon to have wood as part of its construction were the 1953 Buick Estate Wagons. The woodie look continued into the ’60s and ’70s, primarily as vinyl decals.

Best to Enter Into a Professional Rally: Subaru WRX 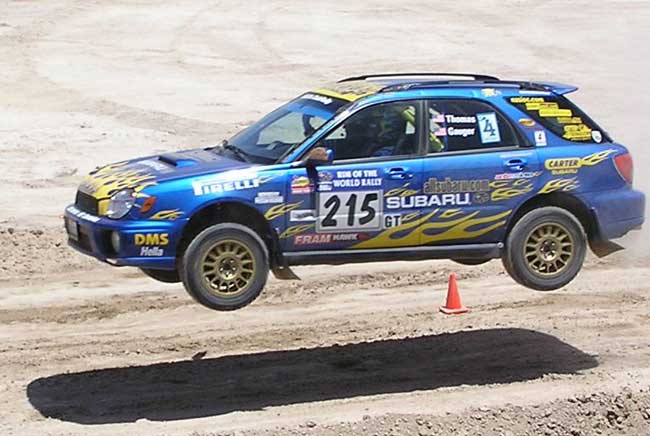 The credentials of the Subaru WRX as a rally car as faultless. The Japanese company has captured  47 WRC events, three drivers’ championships and three constructors titles before withdrawing from the sport in 2008, siting the economic downturn. Regardless, as a wagon to take into the rough stuff, it doesn’t get much better than the WRX – probably the realest sports wagon to ever exist!

Vintage For Sale Half Off: 1960s Pontiac Station Wagon 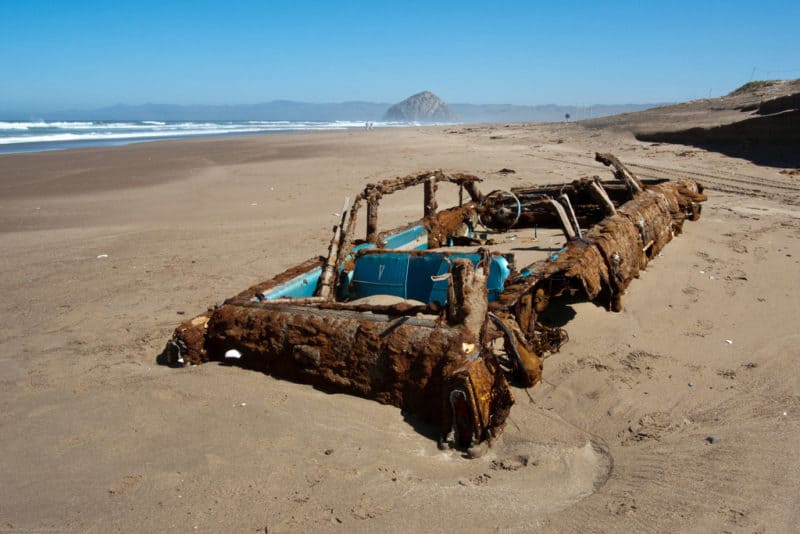 Abandoned in 1973, this 1964 Pontiac Safari nine-passenger station was buried in the sand just south of Morro Bay, CA, where it waited silently beneath the sand. Winter storms in 2012 uncovered the car and locals reported that the car disappeared a few weeks later. Personally, I’d like to know what those seats are made of. 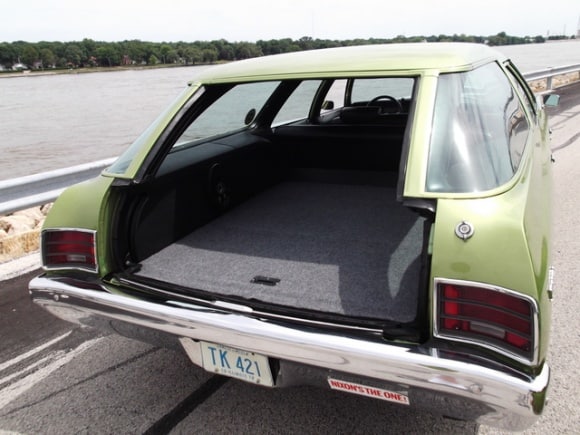 Full-sized 1971-1976 Chevrolet, Pontiac Safari, Oldsmobile, and Buick Estate Wagons all featured a remarkable design marketed as the Glide-Away tailgate, also called a “disappearing” tailgate because when open, the tailgate disappeared into the floor of the vehicle, providing unrestricted access to the cargo area.

What made the 1958 Mercury Commuter so cool wasn’t just that it was a two-door station wagon (like the 1955-1957 Chevy Nomads) but that it was a hardtop, with no B-pillar and frameless glass on the doors. With the windows down the interior was open to the outside world from the front vent windows to the curved rear cargo area glass. 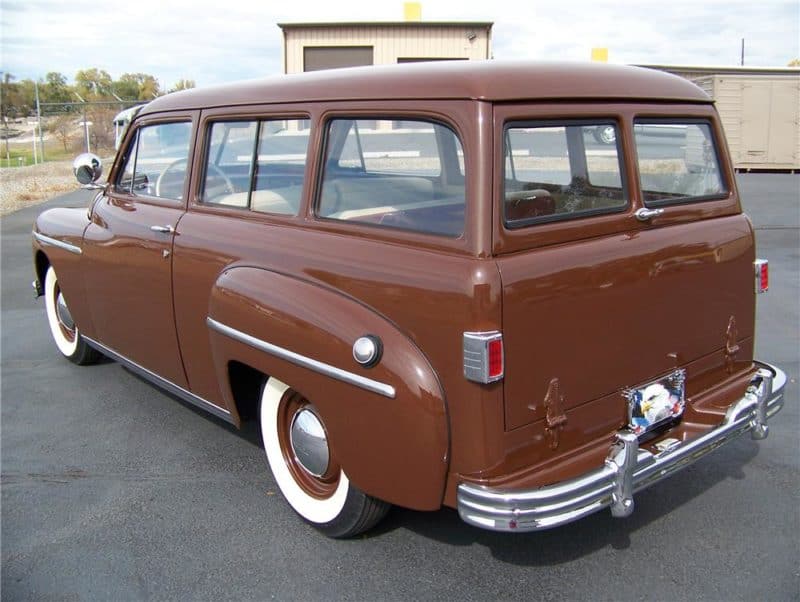 As you’ve already seen, wood was in heavy use in the construction. While it provided a straightforward construction technique for manufacturers – particularly in building low volume models – after a period of time it created a headache for owners, as exposed wood requires additional maintenance. Plymouth led the trend toward all-steel wagons with their 1949 Suburban (yes, that’s right). 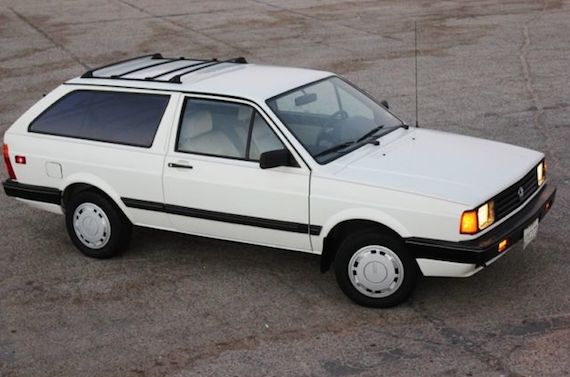 You’d think that as much as Americans love two-door station wagons that they’d always be available from at least one manufacturer, sadly that’s no longer the case.  No manufacturer has sold a true two-door wagon in the United States for over twenty years. Yes, we can call the Ferrari FF a shooting brake, but it’s not quite the same.

How Converting a Car Into a Station Wagon Improved its Appearance: AMC Pacer

Somehow the more squared-off design improved the appearance of the love-it-or-hate-it AMC Pacer. Unfortunately, AMC apparently didn’t know what they had as most were covered on the sides by fake wood trim, moving the Pacer wagon back up the ugly meter. Ugly, yes. But it does have some useful cargo capacity, which goes a long way.

The SV–1600, first introduced in late 1973 by Turkish car maker Anadol, was the world’s first fiberglass-bodied 5-door station wagon. It remained in production until 1982, all models powered by a 68 HP 1.6L Ford pushrod four cylinder engine. 0-60 times were reported in the mid-14s.

How Converting a Car Into a Station Wagon Ruined its Appearance: Dodge Challenger Vista Cruiser 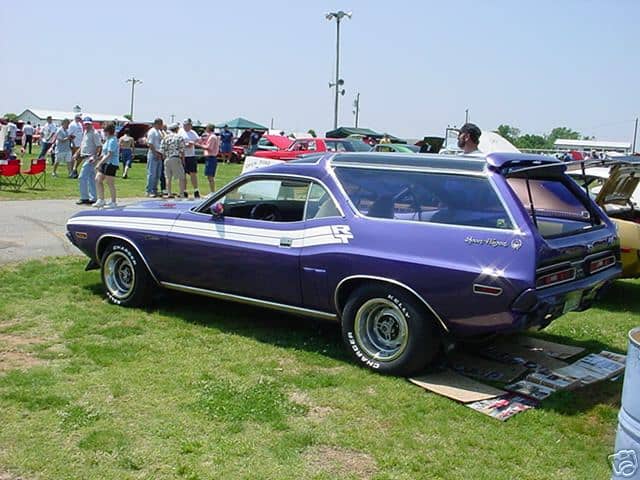 Back in 1973, some enterprising metalworker mated a very rare 1971 Dodge Challenger R/T SE  to the roof from an Oldsmobile Vista Cruiser to create this “Sport Wagon” as the badge reads on the side. Who knows, the Challenger may become valuable enough in the future to cut off the roof and restore it to factory appearance. 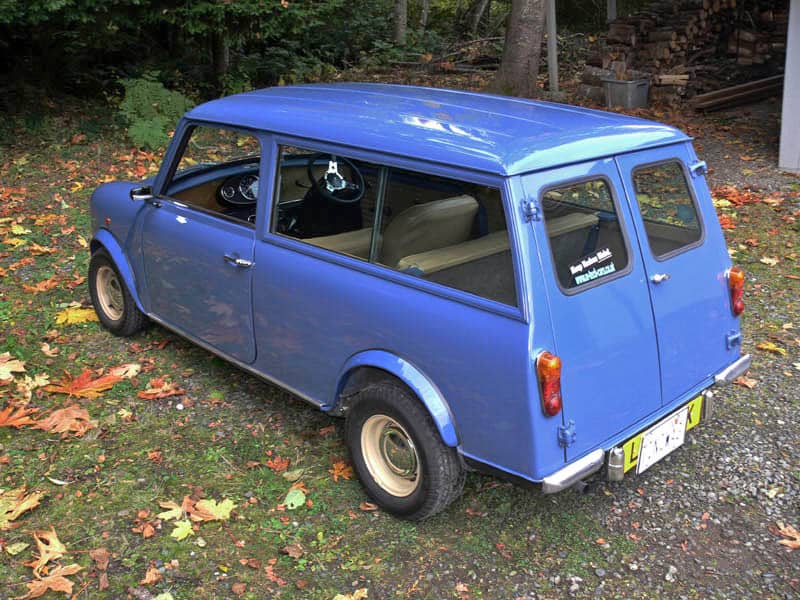 These two-door wagons featured double “barn”-style rear doors. Both were built on a Mini chassis that had been extended by four inches to still tiny 84 inches. Upscale models had decorative, non-structural wood inserts in the rear body making them appear somewhat like a Woodie of the 1950s. Approximately 200,000 of these little wagons were built of their eight year production run. 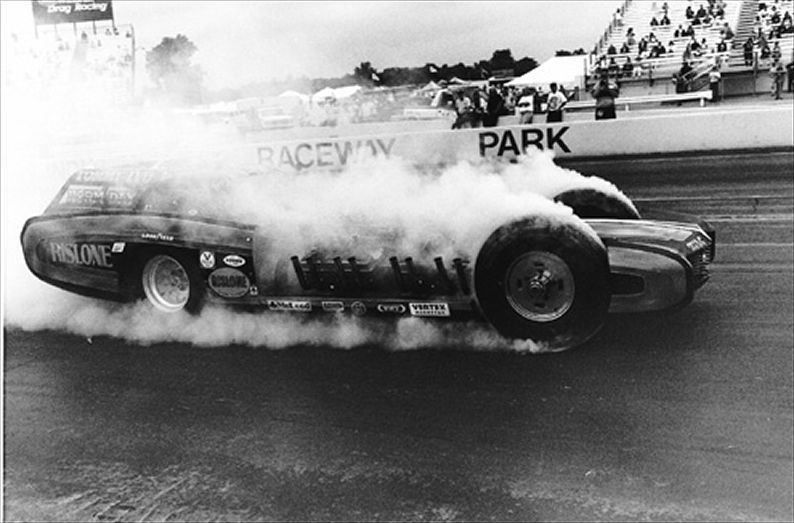 Conceived by actor and drag racer “TV” Tommy Ivo in 1961, it was sold and converted into the Wagon-Master. Run as an exhibition racer, not fitting within NHRA rules, but instead intended to put on a great show for the crowds, which the Wagon-Master did. With four Buick V-8s (total of 1816 cubic inches), two powering the front axle, two powering the rear, the Master was capable of running the entire quarter mile in a cloud of tire smoke. The crowds loved it.

Quite Possibly the Ugliest Edition Ever: Intermeccanica Murena 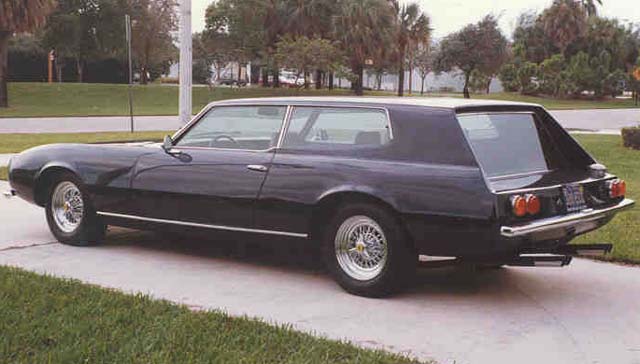 Intermeccania, which started as a Canadian-owned Italian manufacturer of racing components to a maker of replica Porsches in Canada somewhere in between built 11 of the hideous wagon for Murena Motors of New York between 1969 and 1970. Powered by a 360 HP Ford 429 V-8 and a three-speed automatic transmission, the model isn’t even mentioned on the Intermeccania website.

The Station Wagon That Was Too Little, Too Late: 1973 Chevy SS Wagon 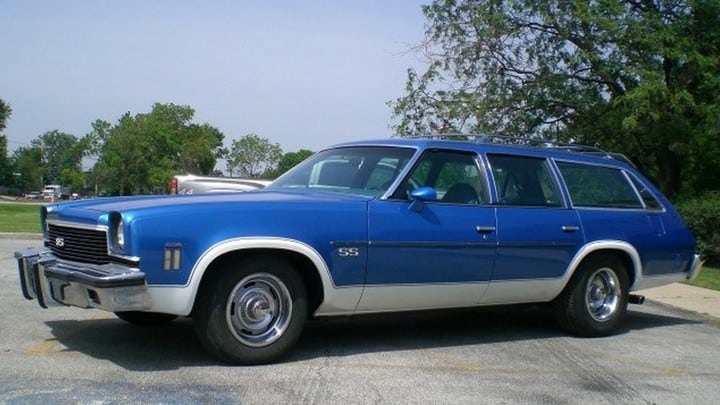 The initials SS (for Super Sport) hold a special place in the hearts of Chevy fans, but only once were they ever seen on the side of a station wagon. In 1973 Chevrolet offered an SS Wagon with the option of a 454 CID V8 engine, though by this point point early emissions controls held power down to 245 HP. The SS option required either a 350 or 454 with either a four-speed manual or a Turbo Hydra-Matic transmission. 1973 was also the final year for the SS option.

That ends our list of the 20 greatest ever Station Wagon Categories. Below is a quick recap minus the important details: