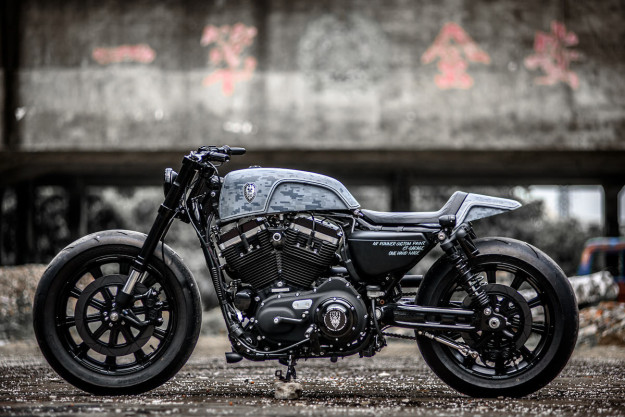 You don’t get a hell of a lot Sportster to Streetfighter customs but after the world sees this incredible machine, we reckon it’s going to get copied a hundred million times over. It’s a powerful looking beast that rocks a modern military look. This is the latest offering from the Taiwan based Rough Crafts Garage headed up by the one and only Winston Yeh. 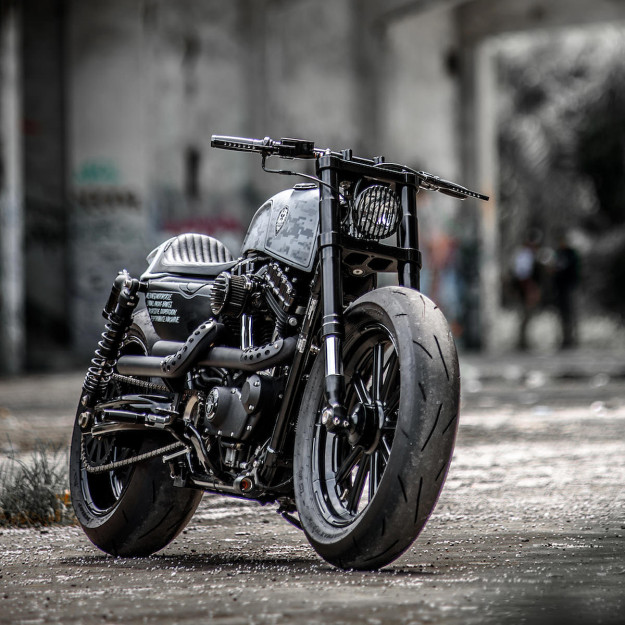 If you’re not familiar with Rough Crafts and the legendary Winston Yeh then following those links and get to know them, because it’s essential viewing. Rather than focus on building out of this world machines or same same flat seat and clip on deals, Rough Crafts take a different approach. When it comes to motorcycle customization, Taiwan has some pretty tight rules, so Winston Yeh and his team focus on clever upgrades, subtle finishes and expert engineering to build their high quality machines. 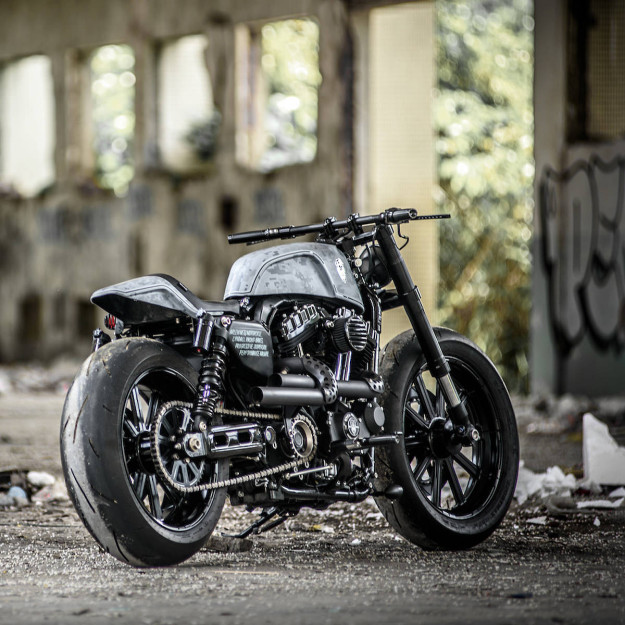 The idea behind this particular ride came to life shortly after Winston completed a custom Dyna (called the Urban Cavalry) for Harley Davidson’s Taiwan Division. In that build, he turned a Dyna into a Streetfighter kind of thing and thought the same idea might be applied to a Sportster version. As fate or luck would have it, a customer walked through the door with a Harley Davidson Forty Eight in tow and a brief that read: “Do whatever you want with it.” – This is what he did.

The Street Fighter by Rough Crafts 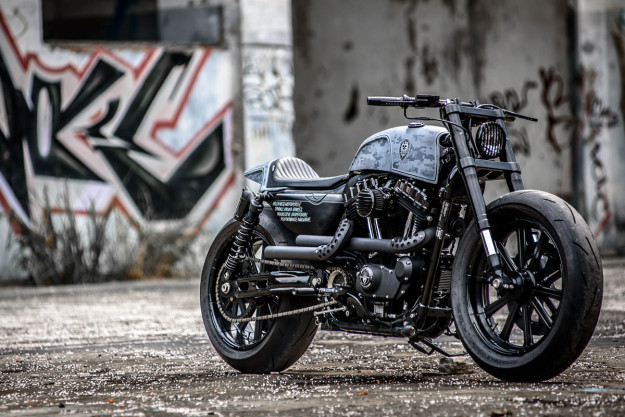 Taking a swing arm from an XR1200 from the garage floor and bolting it onto the Forty Eight immediately changed the look of the bike and the rest of the build took shape naturally. To give the bike a different profile, he swapped out the stock suspension with a set of Suzuki GSX-R600 forks up front and a set of piggyback shocks from Progressive Suspension at the back – with the former being no simple task (for us mere mortals). 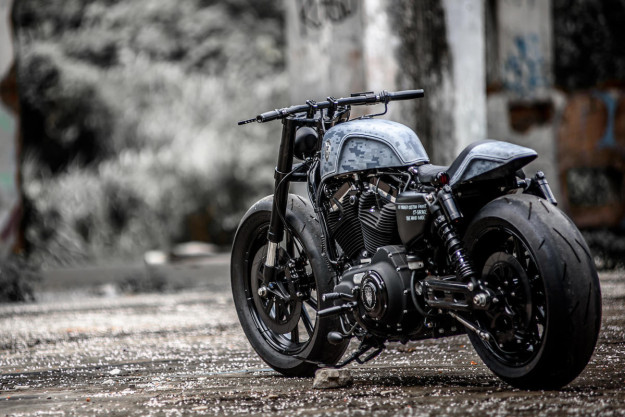 What would be difficult for us was nothing for Winston, who designed and fabricated new triple trees for the Forty Eight, with a new axle for the front and a new caliper mount to hold a single disc on the right hand side rather than the stock two from the Suzuki donor, giving the whole front end a lightweight look. 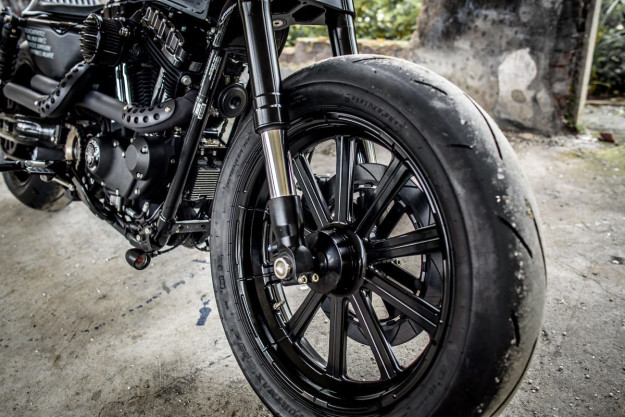 Wheel wise, Winston swapped out the stock for a larger set of forged billet aluminum wheels from Arlen Ness’ 10 gauge series, up two sizes from 16 to 18 at the front and up one to 17 at the rear. Both wheels have been anodized in black and shod with a set of Dunlop Sportsmax tires. The brake discs are from Lyndall Brakes. 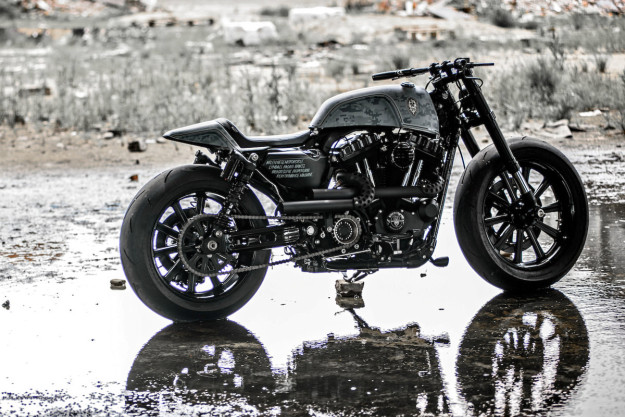 Now, the secret to Rough Crafts and their extraordinary builds are the small details; they don’t go mad with massive frame chops or any of that – they specialize in the details and what they do, they do incredibly well. The best example is the in-house built straight exhaust system and the Rough Crafts finned air filter. The rocker covers, the cool clutch cover , the lights, risers and bars were all specifically designed by Winston for this build and fabricated in house and attached with Rough Crafts own parts where possible and with Performance Machine controls where not. It’s the small details that really set their bikes apart from the crowd. 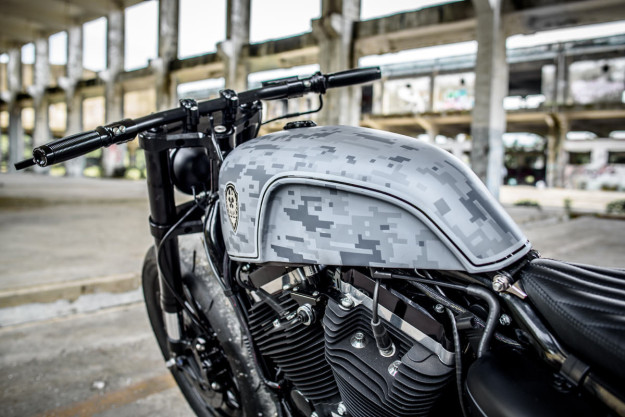 And it wouldn’t be right to forget about the most important of these ‘details’: the paintwork. If you were into the Metal Gear Solid themed bike we featured recently, then you’re probably a fan or modern camo, which is exactly the type of paint job this Forty Eight is sporting. It’s pixelated, it cutting edge, it’s military, it’s 21st century – it’s a true Sportster Street Fighter. And we love it. Even if just for the paintwork. But everything else rocks too.


Stream The Pikes Peak International Hill Climb Over The Web!
Top 10 Fastest Dirt Bike Production Models!
The “Audi” Supersport 10R: An Audi Motorcycle Concept
The 10 Most Expensive Vintage Motorcycles Sold At Auction
Energica Are Seriously Lowering Their US Prices!
The Brabus 1300 R: Lavish Street Beauty with The Heart of a ...