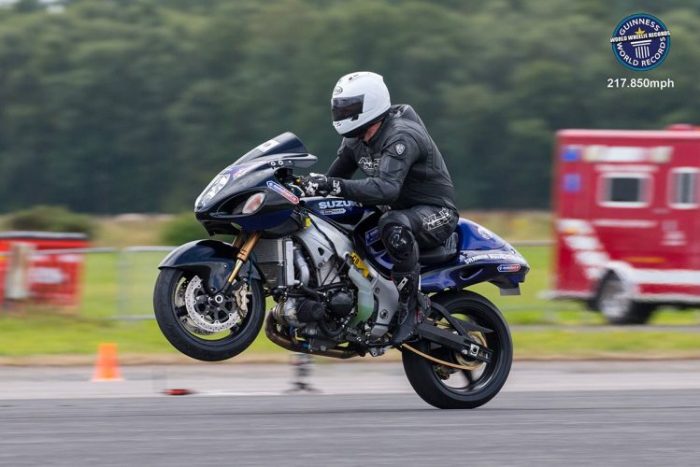 Last year, we were incredibly impressed when Dutch rider Egbert van Popta managed to break the world’s fastest wheelie world record with an incredible speed of 213.3 mph – at the time, it seemed like an unbeatable speed. However, one year later, we’re pleased to announce that the record has been shattered once again by a turbocharged Hayabusa rider by the name of Ted Brady.

The Motorcycle Wheelie World Championship has been held annually for the past twelve years. It takes place every August at a former RAF airbase, the Elvington Airfield, in North Yorkshire, England, and it seems like every year we see a new world record coming from the event. This year was no different as Ted Brady managed to wheelie his way into the record books.

The rules of the game are simple: each rider must complete a full kilometer (0.6 miles) on their back wheel alone, and their exit speed through the trap is clocked, and the fastest speed is declared the winners. Each rider gets three runs along the airfield runway. Brady managed to clock up a frightening top speed of 217.85 mph on his second run at the competition, smashing the previous world record by 4.55 mph. 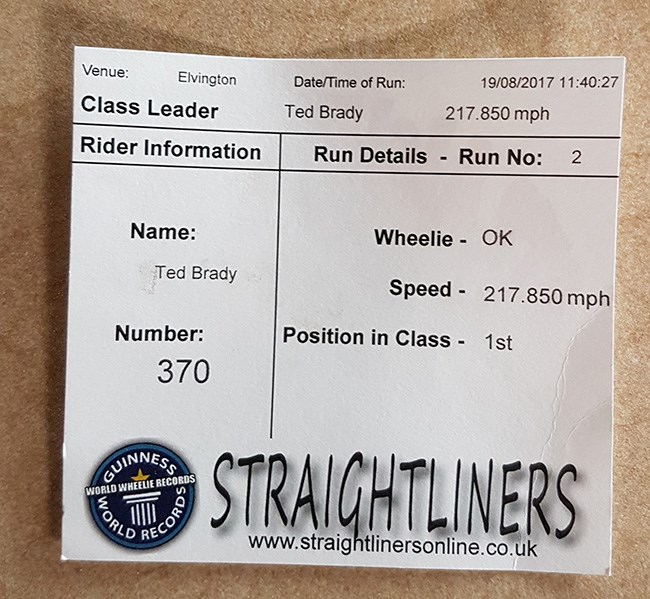 Like last year’s record holder, van Popta, Brady is also a veteran of the competition and also rides a specially made turbocharged Suzuki Hayabusa. Brady’s Busa was built by the renowned Jack Frost from Holeshot Raching, who has also been in the UK’s bike papers recently after his team’s van was stolen along with several high-spec racers and a land speed bike, too. In light of this, Brady dedicated his victory to Jack. While we don’t know the exact specifications of Brady’s “world’s fastest wheelie” Hayabusa, he did mention in an interview that its power figure is somewhere north of “about 540 brake horsepower” – that alone should give you a measure of the skill it takes to pilot one of these machines into the record books.

It has been a big year for wheelie related records. If you cast your mind back to earlier on in the year, you might remember Japanese rider Masaru Abe who managed to perform the world’s longest wheelie – mono-wheeling for 310 miles on his Yamaha Jog. Also, let’s not forget the efforts of Dougie Lampkin who successfully wheelied around the full length of the entire Isle of Man TT circuit, too. What’s next? We think it might take a little while until Ted Brady’s world’s fastest wheelie record is broken, but in the meantime, what other wheelie records are going to be set?!