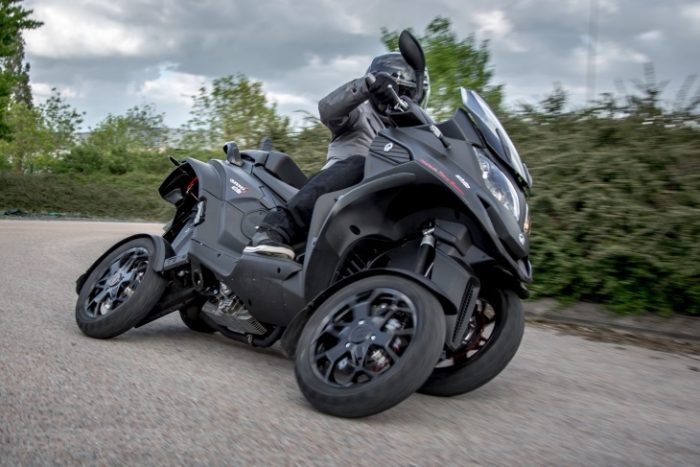 You’ve already seen the next generation of scooters: they’re the three wheeled little numbers that you usually see zipping through Italian traffic in all of the ad campaigns, but this offering is a little different. Rather than displaying the now usual two wheels up front and one wheel at the rear configuration, the Quadro 4 is exactly what it says it is: a four wheeled scooter. So, what does that make it? A scooter? A quad bike? A quad scooter? A quadro scooter? The jury’s still out on that but what we do know is this: it’s pretty damn cool.

The Quadro 4 was first unveiled at the 2014 EICMA show in Milan and it garnered a hell of a lot of attention (whether it was all ‘good’ attention remains to be seen). At the exhibition, the Quadro 4 displayed an incredible ability to tackle a wide range of circumstances, including bashing its way through an off-road course and performing some pretty elegant leans on the road. Quadro are no strangers to the scooter market, they’ve also produced two three-wheelers: the Quadro S, boasting a 346cc engine and a 27 hp output, and the Quadro 350D, that offers a 313cc engine and 23 hp. 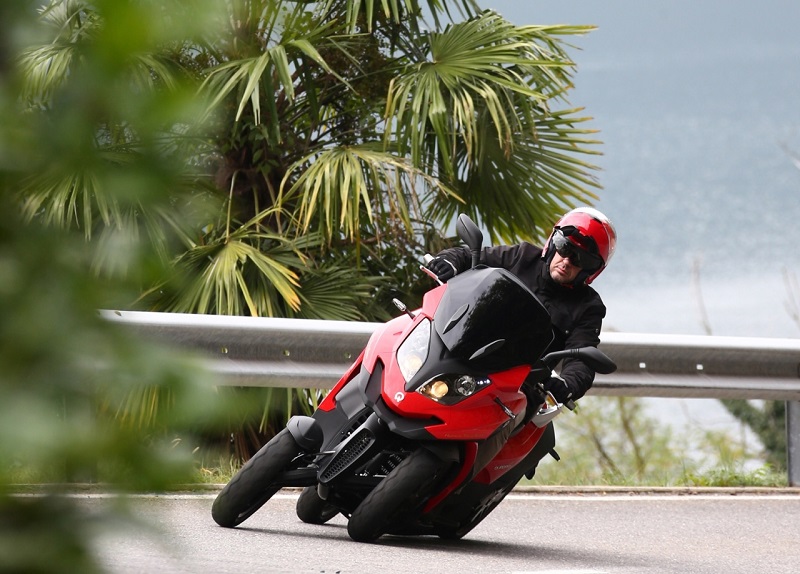 Now, the Quadro 4 is equipped with the same 346cc engine as the Quadro S but boasts another wheel! On top of the extra wheel, it also produces 24.5 Nm of torque at 5000 rpm. The downside is that the tubular steel frame and extra suspension adds a bit of extra weight, to the tune of 257 kilos when dry. But if you discount any homemade units or modded scooters, this is the first four wheeled scooter in the world and should be celebrated. And as scooters go, this one looks like it can perform some incredible maneuvers: anything from hard lean angles to off-road rampaging. 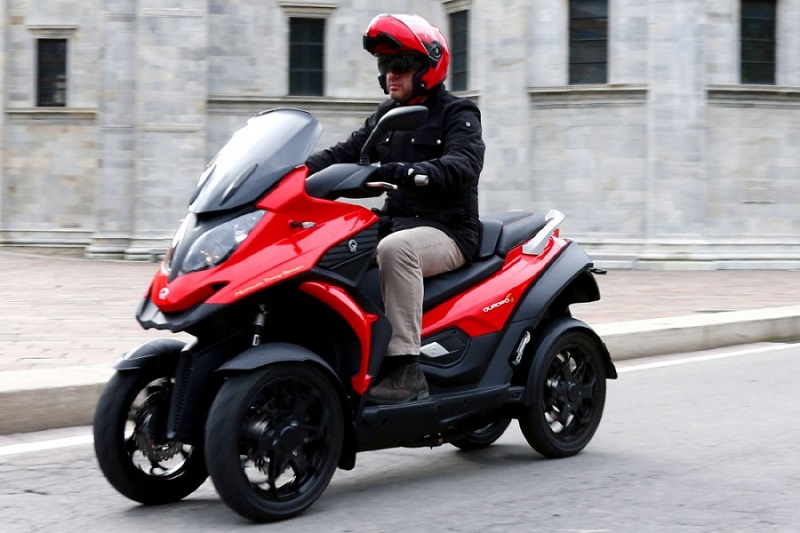 Its performance ability is down to its Swiss made dual HTS (Hydraulic Tilting System). Or in more basic terms (insert sarcasm here): the oleo-pneumatic tilting system acts to ensure that all four wheels find as much as grip as possible – which is a great feature for all year ‘round riders and for the more nervous nellies out there who are keen to find a bit of extra safety without compromising their riding experience. Putting that in more basic terms, it means if one wheel’s going to run into something, the other three won’t, so you won’t go down like a sack of sh*t. According to Quadro, the Quadro 4 can provide up to 45° of lean, which is pretty wild for a scooter. 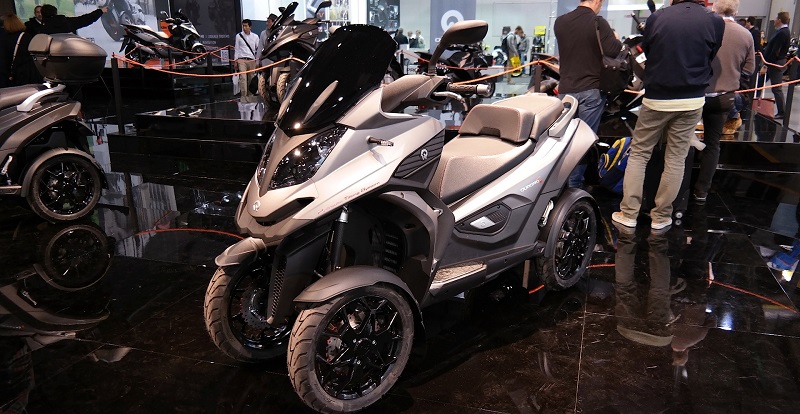 Fuel economy wise, the Quadro 4 is capable of around 62 to 63 miles per gallon, which equates to around 204 miles for a full tank of gas (15 liters) which isn’t too bad. With every plus point, there’s a negative one though…and that’s the price tag. Although it hasn’t been released yet, the Quadro 4 price is touted to be around the $13,000 mark. We’ll have to wait to the end of the month to find out the final retail price but if it’s anywhere around the $13,000 ball park, I can think of a trillion better things to spend my money on. 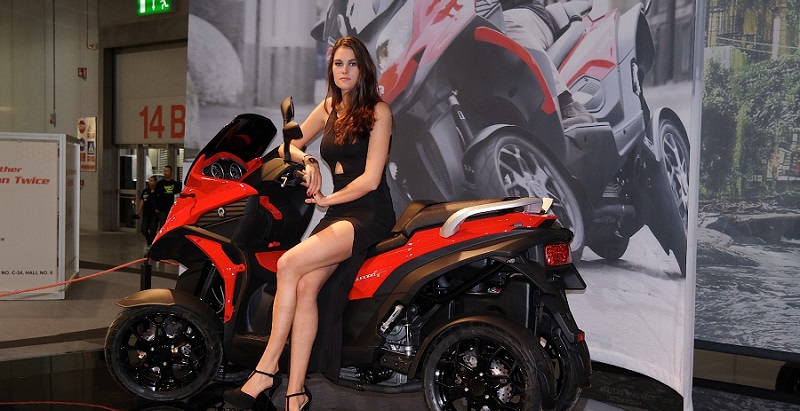 But if you’re a commuter, in search of an economical vehicle that has all of the thrills of a two wheeled motorcycle but the capability to roll safely in all weathers, then this very well might be a viable option for you. It’s not for me but I do like the innovative ideas being thrown around at the moment. If this sort of thing is your cup of tea, check out these Yamahas – or if you fancy something truly weird, check out this one wheeled monstrosity. 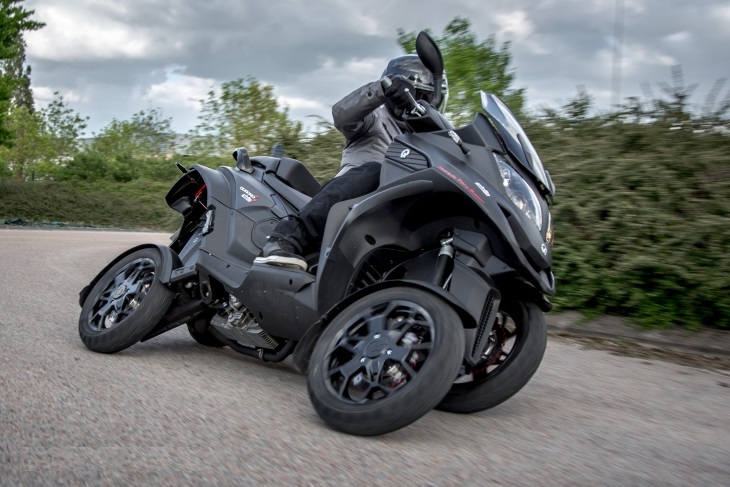 
Say Goodbye To The Yamaha VMAX
Is Kawasaki Planning On Supercharging A Z900RS?
Reviewing and Ranking The Best Automatic Motorcycle
No Limits – No Regrets Documentary: Cross Country Motorcycle...
Honda Updates The CBR650F And CB650F For 2018!
The 2017 Yamaha R6 Specs, Prices And Availability