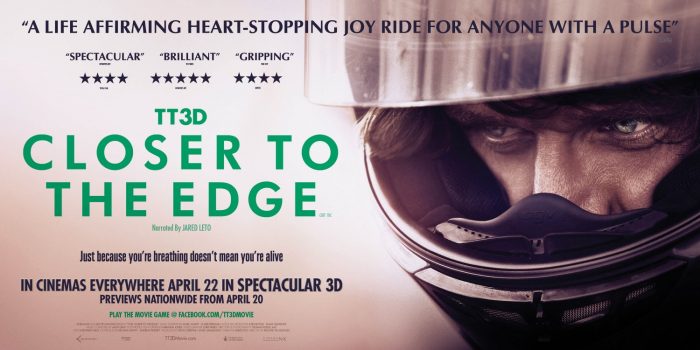 Everyone loves a good motorcycle documentary or movie – it doesn’t even matter what type of bike you ride, as soon as a bike comes on screen, you can’t help but get a little bit excited. Except maybe about the film Wild Hogs­, but the less said about that the better. Those actors obviously had bills to pay… Anyway, unlike car movies, where we see overpaid actors mess around in cars we could never afford, when it comes to the humble motorcycle, everyone can afford one, and everyone can have fun on one. These are a few of our favorites and by no means are these the absolute best.

We’re mainly focusing on documentary films here rather than fictional movies. However, if that’s what you’re looking for then you should check out The Motorcycle Diaries, an account of Che Guevara’s motorcycle travel adventures in South America, before diving into other motorcycle classics like The World’s Fastest Indian, and Mad Max.

As far as motorsport documentaries go, this one is quite possibly one of the best, if not one of the most influential. Here, we have Bruce Brown taking us through the world of riding and most importantly, racing. If you haven’t seen it yet, get on it now. If you weren’t planning to go for a ride out this weekend, after watching this, you’ll be planning one. It ticks all the right boxes and not only is it visually stunning, it also has a great soundtrack too.

Even better: if you’ve seen the first one, it’s also high time that you took a look at the ‘sort of’ sequel and follow up film from Bruce Brown’s very own son, Dana. It features some cool interviews with some big industry names from MotoGP world champion and Honda rider Marc Marquez, to renowned motorcycle builder Roland Sands. It’s called On Any Sunday: The Next Chapter (obviously) and this motorcycle documentary is well worth your time.

When this came out last year, it kind of passed me by. It didn’t get the press that it well and truly deserved. Luckily, if you want to check out this absolute masterpiece, it’s readily available on whatever internet ‘on-demand’ entertainment outlet you’re currently using. It does cover quite a lot of old ground, asking the usual ‘why we ride?’, ‘what does riding mean to you?’ etc kind of questions but it works because it answers those questions with visually stunning riding footage and honest and heartfelt responses that would easily inspire anyone to get on two wheels and ride off into the sunset. If you’re trying to convince someone to get on a bike, this is certainly a powerful persuasion tool and one of the best documentary films on the topic of two-wheels that we’ve seen in a while that applies to all riders, from dual sport adventurers to cruiser riders.

Any talk of Ewan McGregor and Charley Boorman’s epic road trip journey from London to New York usually divides the camp: some love it for being a truly inspiring and proper old fashioned adventure, others hate it because Ewan McGregor is a household name with a vast bank balance and a support crew like no other motorcycle travel show could emulate. In reality, it really is a great adventure story and the whole “it’s easy for rich people” argument shouldn’t come into play. It’s one that I watch again and again, because despite their fame, they’re easy to relate to and their story is true. And who doesn’t like watching adventure bikes actually adventuring?

It’s also worth mentioning the Long Way Down too. While it certainly wasn’t as good as their first adventure, it still captures the road trip mood that only motorcycle travel can inspire. BMWs, open roads, dual sport adventure bikes, and Africa, in all of their splendor. Even Ewan’s (now-ex) wife couldn’t put a downer on that… right?

As motorcycle racing goes, nothing can top the Isle of Man TT for thrills and excitement but unlike the MotoGP or World Superbikes, the Isle of Man isn’t going to come to a race track near you – you have to go to it if you want to enjoy it – and for many people, that just ain’t gonna happen. A few years ago, TT3D: Closer To The Edge came out and it’s truly incredible. It brings the TT to you in a way that regular TV coverage just can’t. It deals with the thrill and excitement excellently and covers the darker side, the risk and the tragedy head on. It does mainly focus on Guy Martin and sure, his personality isn’t for everyone but don’t let that stop you from watching this amazing documentary. You’ve got John McGuiness, Ian Hutchinson Connor Cummins to balance him out… And if you prefer your motorcycle documentaries to be more US focused, we recommend Dust to Glory – it follows similar motorcycle racing themes, but Dust to Glory takes a different approach.

Unlike Long Way Down, Mondo Enduro has no reason to piss anyone off. What you’ve got here is a real bunch of guys tackling the world without support, making for one of the best motorcycle documentaries ever filmed. It’s an epic journey that takes across Central Asia, across Siberia, down from Alaska to South America and from South Africa through the Middle East back through Europe to London, all on Suzuki DT350s without a hint of a support crew (or a Hollywood bank balance) to be seen. It’s the everyman’s Long Way Down and the perfect inspiration to get you planning your next big bike trip. Granted, it’s a little bit dated now as the footage was shot between 1995 and 1996 but this is a seriously important documentary for all motorcyclists out there. Watch Mondo Enduro and be amazed, it’s one of the best motorcycle documentary film productions ever made

Still in need of more viewing? Check out our list of top motorcycling movies for more iconic cinema!