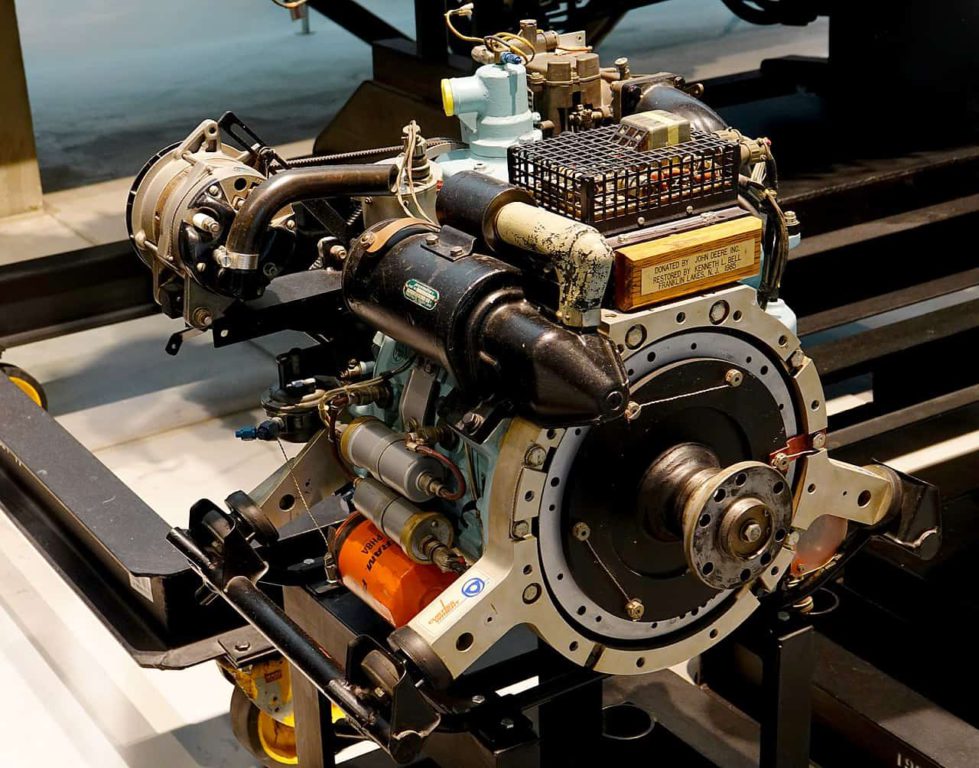 For half a century, Wankel-powered cars caused considerable excitement in the auto industry. They were mass-produced by German automaker NSU and Japan’s Mazda. There were even a handful of Wankel-engine racing cars and low-volume production motorcycles. But the last Wankel production model, Mazda’s RX-8, was discontinued in 2012.

Yet the Wankel engine lives on through a vibrant aftermarket scene. Specialist shops are building versions producing up to 1,000 horsepower. Mazda only ever manufactured such screaming powerplants for race cars like the 787B which won the 1991 24 Hours of Le Mans.

So while the Wankel engine may be “dead,” its most extreme incarnations are actually more accessible than ever.

How a Wankel Works

In a traditional piston engine, the intake, compression, combustion, and exhaust all happen in the cylinder. In a Wankel engine, these same four actions each happen in separate parts of the housing. The pressure of combustion is contained in a chamber formed by part of the housing and sealed in by one face of the triangular rotor (hence “rotary”), which takes the place of pistons in a traditional internal combustion engine.

“The rotary is very compact and easy to deal with,” said Logan Carswell, owner of specialist rotary-engine performance shop Defined Autoworks in Pataskala, Ohio. “I always call it a garage man’s companion. Just the lack of valves and heads alone simplifies working on them tremendously.”

In simple terms, a standard Wankel engine typically comprises two rotor-shaped pistons that rotate on a stationary gear with an eccentric motion.

“This motion turns an eccentric shaft which in many respects is the crankshaft. The rotor itself opens and closes the intake ports,” said Carswell. “So there are no valves, valve springs, camshafts, rocker arms, or even a timing chain.”

The Wankel engine takes its name from its designer, German engineer Felix Wankel. He received his first patent for the engine in 1929. His work was interrupted by World War II. Serious development of the Wankel engine only began in the 1950s at the now-defunct NSU, which produced the first working prototype in 1957.

“The biggest advantage of the rotary engine is less complex parts and also high power to weight and size ratio,” Carswell explained.

The smoothness, reliability, and quiet running of the uncomplicated Wankel engine caught the attention of automakers worldwide, with the likes of AMC, Alfa Romeo, GM, Mazda, Mercedes-Benz, Toyota, Porsche, and Rolls-Royce all signing license agreements for development. But while some of these went as far as producing Wankel-powered prototype cars, such as the futuristic Mercedes-Benz C111, it was only NSU and Mazda that really ran with the idea in cars.

There were also production Wankel-engined motorcycles. Norton’s Commander and F1 bikes employed the technology, as did the German DKW/Hercules W-2000, Suzuki’s RE-5, and the Dutch Van Veen OCR 1000. But these were only ever manufactured in small numbers, and the last of them, the Norton Commander, disappeared in 1992

NSU and Mazda Open the Market

Mazda and NSU signed a study contract to develop the Wankel engine in 1961. NSU was first to market with its sporty but short-lived NSU Spider in 1964. It followed up with the innovative Ro80 luxury sedan in 1967. But NSU had jumped the gun, as both these cars suffered from unreliable apex seals on their engines’ rotor, poor shaft lubrication, and disappointing fuel economy.

NSU’s premature release of these Wankel-engined cars hurt the reputation of the technology and even after these issues were resolved, sales did not recover. Combined with the crippling costs of so many warranty repairs, this curtailed further NSU Wankel engine development. The Ro80 lingered until 1977, when the entire NSU brand disappeared from the public eye, absorbed into what would ultimately become Audi.

Meanwhile, Mazda claimed to have solved the apex seal problem, although it remains probably the weakest link in an otherwise very dependable design. Mazda released its first Wankel engine car, the beautiful Cosmo 110S, in 1967. From then on, Mazda became the worldwide leader in Wankel cars.

“Mazda chose to use it not only because they believed in it, but because, at the time, Japan was consolidating car manufacturers,” Carswell explained. “You had to be either a very large company or unique enough in a new technology to keep them around. Mazda was not large at all, so using the rotary literally became the only way to survive this consolidation.”

Where other companies were interested in the Wankel as an interesting alternative to piston engines, Mazda simply had to make it happen.

“With so much pressure on Mazda to make the rotary work, I believe they had the greater amount of persistence and talent to pull it off,” Carswell continued. “It really was a deep survival that forced success. The biggest breakthrough was the apex seal technologies they developed.”

Mazda initially produced a number of Wankel-powered vehicles, including a pickup truck and bus. But in order to comply with emissions standards, it chose to use a design that, while cheaper to produce, increased fuel consumption. Sadly, this coincided with a sharp rise in fuel prices following the 1973 oil crisis.

“The Wankel use has been limited mostly due to fuel consumption in road use,” said Carswell. “Its miles-per-gallon fall short of comparable piston engines. Secondly is the emissions. It is very hard now for a Wankel to meet current emissions.”

So Mazda abandoned the Wankel in most of their automotive designs and continued with it only in sports cars: the RX-7 (1978-2002) and RX-8 (2002-2012). More than 800,000 RX-7s were produced, and nearly 200,000 RX-8s. Both models retain cult followings worldwide. But by 2012 ever-stricter emissions standards resulted in Mazda abandoning the Wankel altogether.

The Wankel car scene today, in the U.S. at least, consists of Mazda RX-7s and RX-8s. And it’s the more numerous RX-7 that tuners mostly seek.

“The RX-8 is a fun car but has limited modifications. If looking for a fun daily or weekend car, they are good for that,” said Carswell. “The RX-7 gen 3 and gen 2 turbo are the easiest to make large power out of reliably.”

Mazda normally used two-rotor designs, although a more advanced twin-turbo three-rotor engine was fitted in some of the legendary and super-advanced JDM Eunos Cosmo 2+2 coupes (1990-1996). It confined four-rotor Wankel engines to the racetrack.

“With the Mazda rotary engines, each individual rotor and matching rotor housing are the exact same size. So a 2 rotor is a 1.3-liter, a 3 rotor is a 2-liter and a 4 rotor is a 2.6-liter,” said Carswell. “The size of each rotor and housing cannot get physically larger if staying with Mazda architecture.”

“Four-rotor engines are definitely a big part of what Defined Autoworks does,” said Carswell. “I had one of the first 4-rotors built in the States.”

“When I build them, you are using a good number of 2-rotor parts such as the rotors and housings. But many custom parts are required, like the custom eccentric shaft, custom stationary gears, custom machine work, longer bolts, different counterweights, and some more items,” Carswell said.

You can see a Defined Autoworks 4-rotor RX-7 being put through its paces by Carswell here. What’s claimed to be the first 1,000-horsepower 4-rotor RX-7 was first shown off on YouTube in February. And Defined Autoworks has a YouTube channel devoted to rotary engines, race cars, muscle cars, semi-trucks, and more.

“If you are new to the Wankel cars, take your time and read past the white noise. A lot of info online is great; a lot is totally not true,” said Carswell. “The maintenance for all generations is very simple. Change your oil at 3,000 miles and change the spark plugs more frequently than your piston-powered cars. Don’t run them out of oil – all RX cars inject oil to lubricate the internal seals.”

Numerous RX clubs and communities around the country cater to “rotorheads” (as Mazda RX enthusiasts are known). These include the Southern California RX Club (organizers of the SevenStock event seen in Carswell’s video above); the RX-7 Club; and the Mazda Rotary Club.

And the possibilities for Wankel modding seem to be getting stretched all the time, as experts like Defined Autoworks delve deeper into the limits of the technology and more and more aftermarket parts become available.

“The modifications that can be done to the Mazda rotary are quite lengthy,” offered Carswell. “Increasing the intake and exhaust ports in size affects the duration, much like a larger camshaft in a piston motor. The aftermarket billet parts are starting to really get big now so the possibilities are changing as well. Less weight, more RPM, less wear.”

Will Production Wankels Ever Return?

“Mazda continues to work with [the Wankel engine] in the far background, but the rotary may not come back in the traditional form we know it for,” Carswell concluded. “I think Mazda may bring it back, but the design will be different. The Wankel, for example, is much better suited for hydrogen versus a piston engine. Due to the combustion taking place in a different area than the intake, the rotary has less heat on the intake side of the motor.”

So will you be doing your part to keep Wankel technology alive and progressing? Mazda RX-7s — both coupes, and convertibles —sell for well under $10,000 stateside. So becoming a rotorhead is an accessible passion with ever-growing possibilities.


The Top Ten Cars Most Desired by Women
The Best Of 2021 Jeep
Top 5 V8 swaps for the budget-minded tuner.
The Lamborghini Gallardo Go-Kart is a Madman's Wet Dream
SV Bespoke Brings Us The Limited Edition 2021 Jaguar F-Type ...
The Psychology of Driving: What Your Driving Says About You