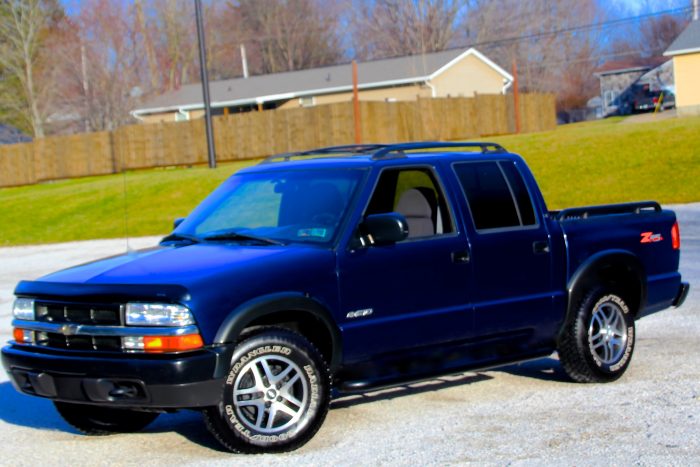 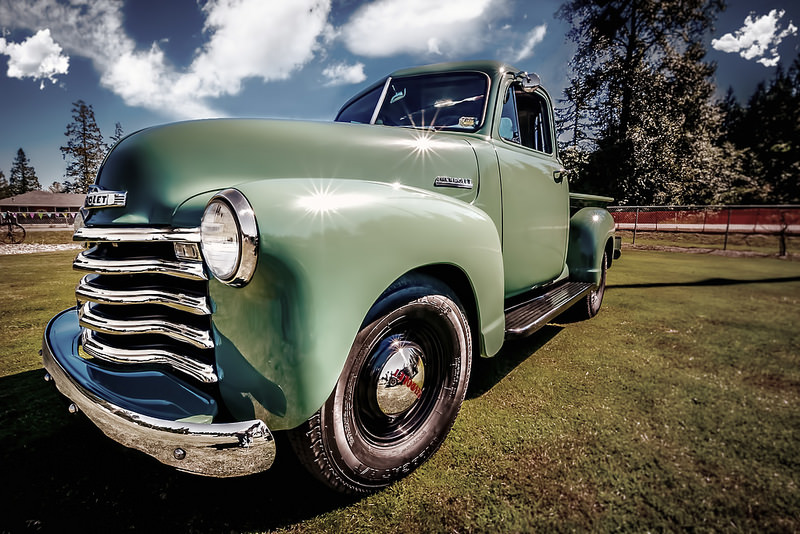 The pickup truck is an immensely useful and versatile tool; hence, the enduring popularity of the segment. Pickups are so popular that in most markets the top selling vehicle is a full-size pickup truck, with little trucks not far behind. The main reason for the popularity of little trucks is that some buyers feel that a full-size pickup is more than they need. These buyers prefer compact trucks like the Chevrolet Colorado, GMC Canyon, Nissan Frontier, etc.

According to U.S News & World Report, in 2016, 450,000 buyers chose little trucks over full-size pickups in the United States alone. These buyers often cited the increased fuel economy, improved maneuverability in urban settings, and a more affordable price as the main reasons for choosing little trucks over full-size. At this time, there are five little trucks available in the North American market. In addition to these current production compact trucks, many automakers have affordable used options on the market. Little trucks like the Ford Ranger, Ford Explorer Sport Trac, Dodge Dakota, Suzuki Equator, and Chevrolet S10 come to mind rather quickly. So, without further ado, here are the little trucks that everyone should consider when shopping for their next pickup. 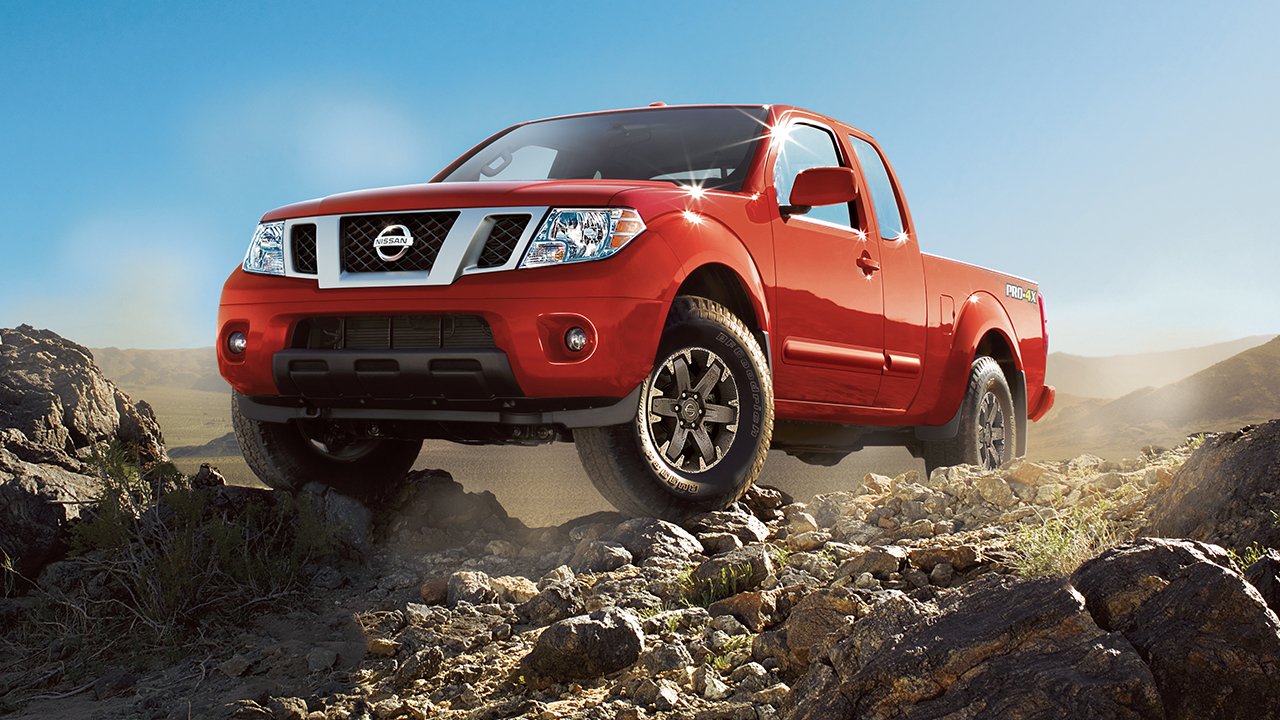 The Nissan Frontier heads up our list of little trucks for two reasons: it is durable as all get out and it has the lowest sticker price whether you buy it new or used. For 2017, a base Frontier retailed for less than $19,000. According to Kelley Blue Book, a 2015 Nissan Frontier is worth around $15,000, so the Frontier holds its value quite well.

Nissan has not redesigned the Frontier in over a decade, so the exterior looks dated next to newer models like the Honda Ridgeline. Despite an older design, the Frontier has led its class in several categories for years. The available V6, standard crew cab, and outstanding off-road capabilities make the Frontier an excellent workhorse or urban crawler. 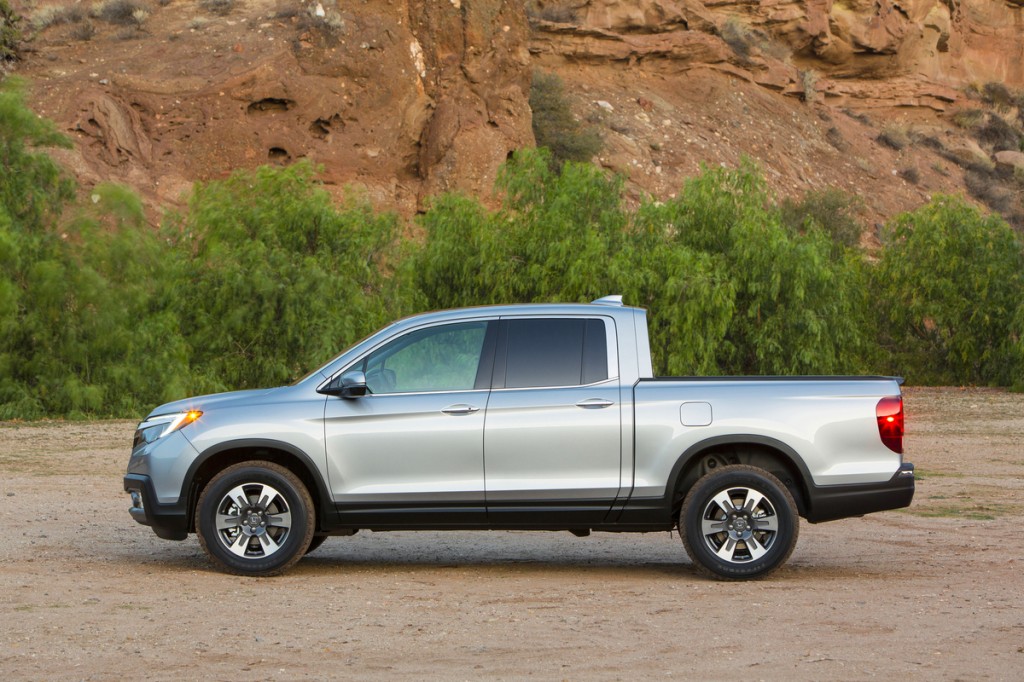 Honda was absent from the pickup truck market for a few years, but has come back revitalized and ready to tackle anything. The new generation of the Honda Ridgeline is only available as a five-seat crew cab and many describe it as a lifestyle truck. The Ridgeline features several exclusive tech features; advanced driver assistance technologies that include lane keep assist, collision mitigation braking, forward collision warning, road departure mitigation, lane departure warning, and adaptive cruise control; an in-bed trunk, audio system, and power outlet; as well as one of the highest initial quality ratings in any class.

All of this results in the highest sticker price within the little trucks group. In defense of the Ridgeline, it offers outstanding build quality and much more tech than the other little trucks on our list. 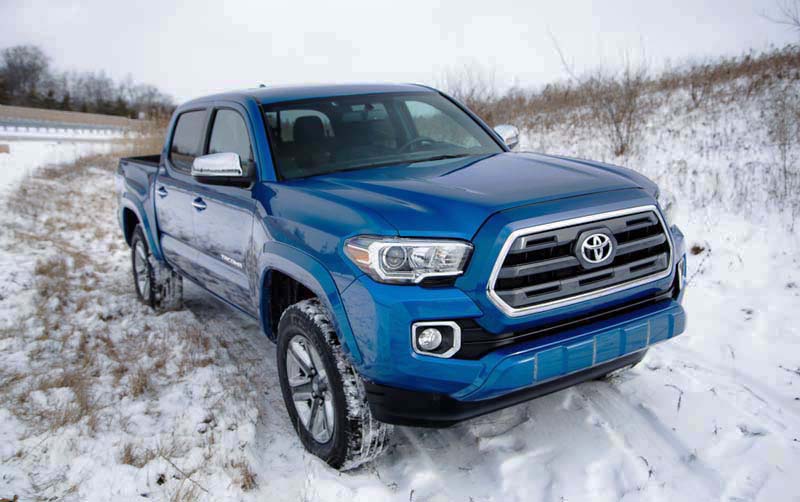 The Toyota Tacoma has been a great option for people who prefer little trucks since it hit the market in 1995. The earliest models were revered for their off-road abilities and agility in the muck and mire. Despite becoming more refined and tech savvy, the Tacoma is still a very powerful and agile truck, especially if you opt for any of the TRD packages with the available 278 hp V6.

If off-roading isn’t your thing, the Tacoma is still a great option. It offers one of the highest towing capacities in its class and has the largest payload capacity when compared to other little trucks. 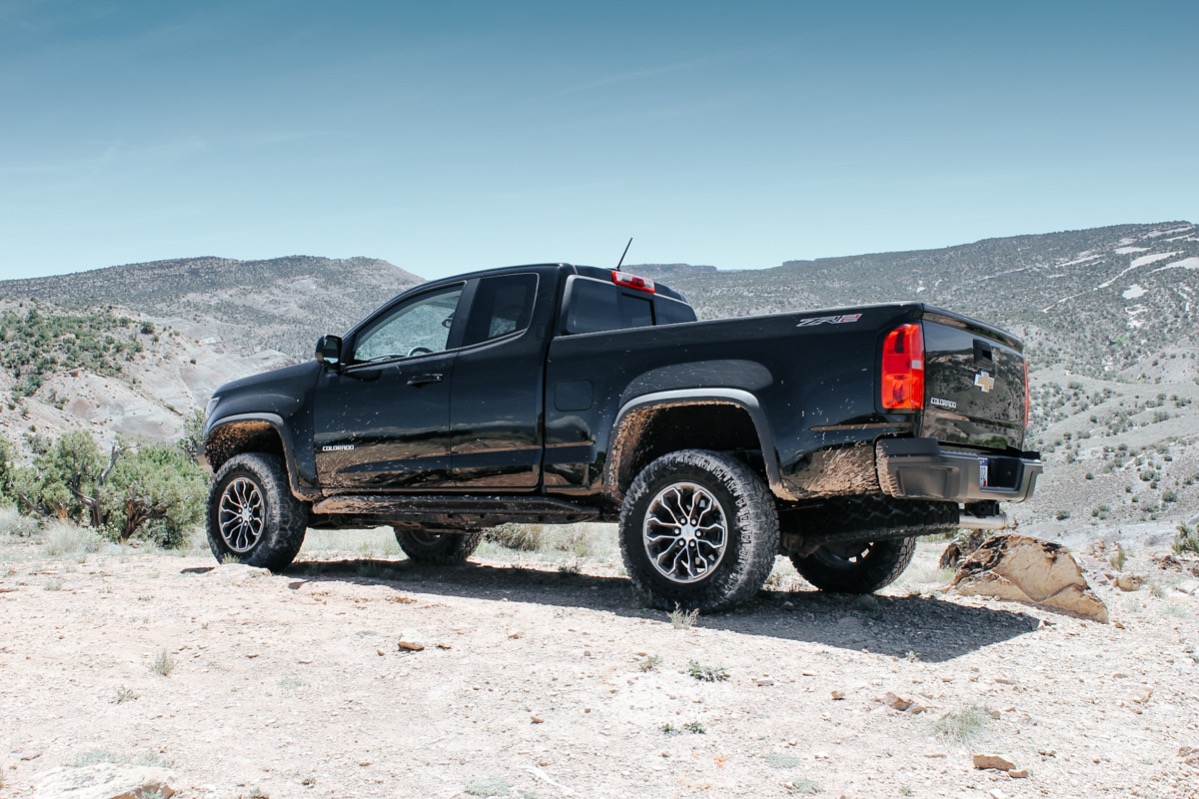 The Chevrolet Colorado has won the U.S. News & World Report’s Best Compact Truck for the Money award for the past three years. One of the top features the Colorado offers is a spacious cabin with interior appointments that feel more premium than expected. In the crew cab configuration, the Colorado has the most legroom in the class. For the 2017 model year, Chevrolet added a four-cylinder turbodiesel to the engine line-up, bringing excellent fuel economy and increased towing capacity(7,700 lbs) to buyers.

Price wise, the Colorado is an excellent option as well. Only the base model Frontier offers a lower selling point. Rounding out the Colorado’s recommendations is that owners have ranked it as one of the most reliable little trucks for several years running. 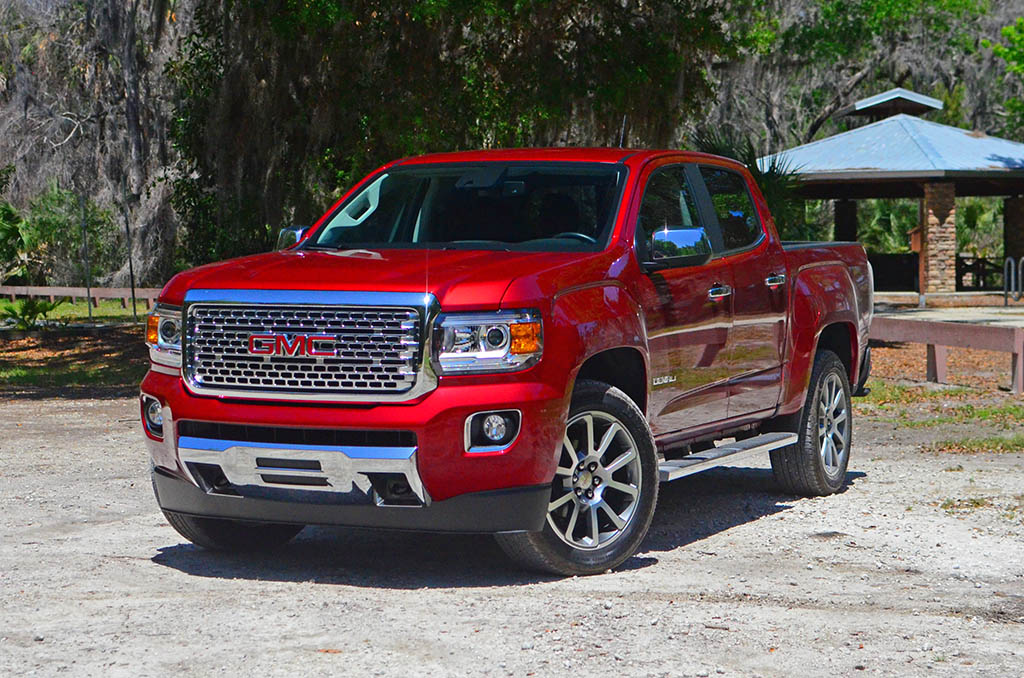 You can not talk about the Chevrolet Colorado without talking about its near-identical cousin the GMC Canyon. The Canyon stands out from other little trucks for its excellent interior materials, easy to use technology, and great ride. It offers the same powerful engine lineup and strong towing ability as the Colorado. The new turbodiesel offers 22 mpg in the city and 30 mpg on the highway in the rear-wheel drive layout. Four-wheel drive only lowers those numbers by 2 mpg.

While the Canyon and the Colorado are nearly identical offerings, the Canyon is a bit more expensive to buy. The price difference is only a few thousand dollars, but there is no real explanation for it. Despite having a higher price tag than the Colorado and Frontier, the GMC Canyon is still more affordable than some of the other little trucks on our list. The Canyon also rounds out the current production little trucks on our list. Now, let’s move on to the used little trucks offered by Ford, Dodge, Suzuki, and Chevrolet. 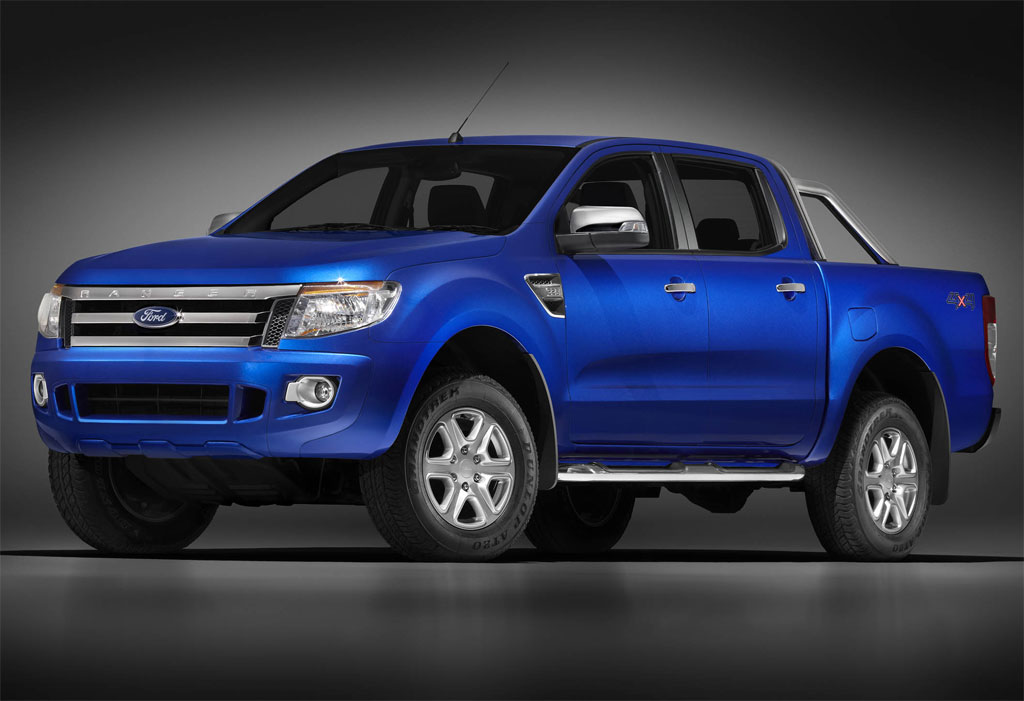 The Ford Ranger was discontinued in 2011 after a 28 model year production run. The Ranger was the best selling compact truck in North America from 1987 through 2004. The only truck to have a longer run at the top is the Ford F-150.

The final three model years of the Ranger were all similarly equipped. There were three trim levels, XL, XLT, and Sport. Of the three, the XLT package is the most sensible purchase. The standard powerplant is a 2.3L inline-four capable of 143 hp and 154 lb-ft of torque. While this engine is adequate for most uses, the optional(on XLT, but standard on Sport package) 4.0L V6 has an output of 207 hp and 238 lb-ft of torque. The additional torque will come in handy when towing or loaded down. The XLT package also makes foglamps, full power accessories, keyless entry, a leather-wrapped tilt steering wheel, CD player, and satellite radio available. If you can find an XLT with four-wheel drive, it will have heavy-duty shock absorbers and tow hooks equipped. According to Kelley Blue Book, a four-door 2011 Ford Ranger XLT with all of the optional equipment listed should cost less than $15,000 in most areas of North America, making it very affordable. 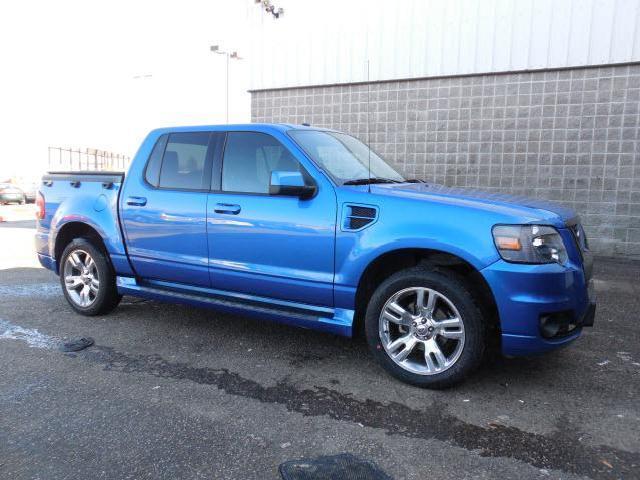 The base engine in the Ford Explorer Sport Trac is a 4.0L V6 that generates 210 hp and 254 lb-ft of torque, both respectable numbers. There is an optional 4.6L V8 available in the Limited trim level only. The 4.6 pumps out 292 hp and 315 lb-ft of torque and is mated to an upgraded six-speed automatic gearbox.

The Ford Explorer Sport Trac is available in two trim levels: XLT and Limited. While the XLT is the base trim in the Sport Trac, it features foglights, full power accessories, a power-sliding rear window, air-conditioning, a leather-wrapped steering wheel, and a CD player with satellite radio. The Limited package adds heated side mirrors, leather seats, heated front seats, and Ford’s Sync interface. Options include: dual-zone automatic climate control, a sunroof, rear parking sensors, power-adjustable pedals, and a voice-operated nav system with Sirius Travel Link. A 2010 Ford Explorer Sport Trac Limited with all of the optional equipment listed should retail for less than $17,000 according to Kelley Blue Book. 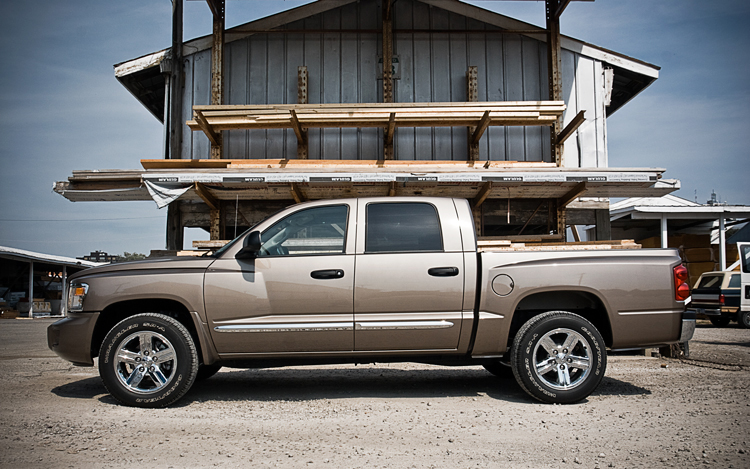 The Dodge Dakota was phased out at the end of the 2011 model year after a 24 year production run. From its inception, the Dakota was larger and had a higher towing capacity than the Ford Ranger or the Chevrolet S-10, a selling point that Dodge made the most of.

The RAM Dakota is available in four trim levels. The single cab Dakota is available in the ST and Big Horn trim, with the TRX4 and Laramie levels only available in crew cab Dakotas. The ST is very basic and the Big Horn only adds full power accessories and cruise control. Optional equipment with the Big Horn includes: full-swing rear doors, a sliding rear window, utility bed rails, a power driver seat, remote engine start, a leather-wrapped steering wheel with audio controls, and an upgraded stereo. All Big Horn options are standard with the TRX4 trim and Dodge adds off-road tires, skid plates, and an anti-slip differential. If you find a Dodge Dakota Laramie, it will have all of the Big Horn optional equipment plus alloy wheels, automatic headlights, a bedliner, heated front seats, and leather upholstery. A 2010 RAM Dakota Laramie with all of the equipment listed should retail for less than $15,000 according to Kelley Blue Book. That is a great price when you consider all of the equipment you are getting. 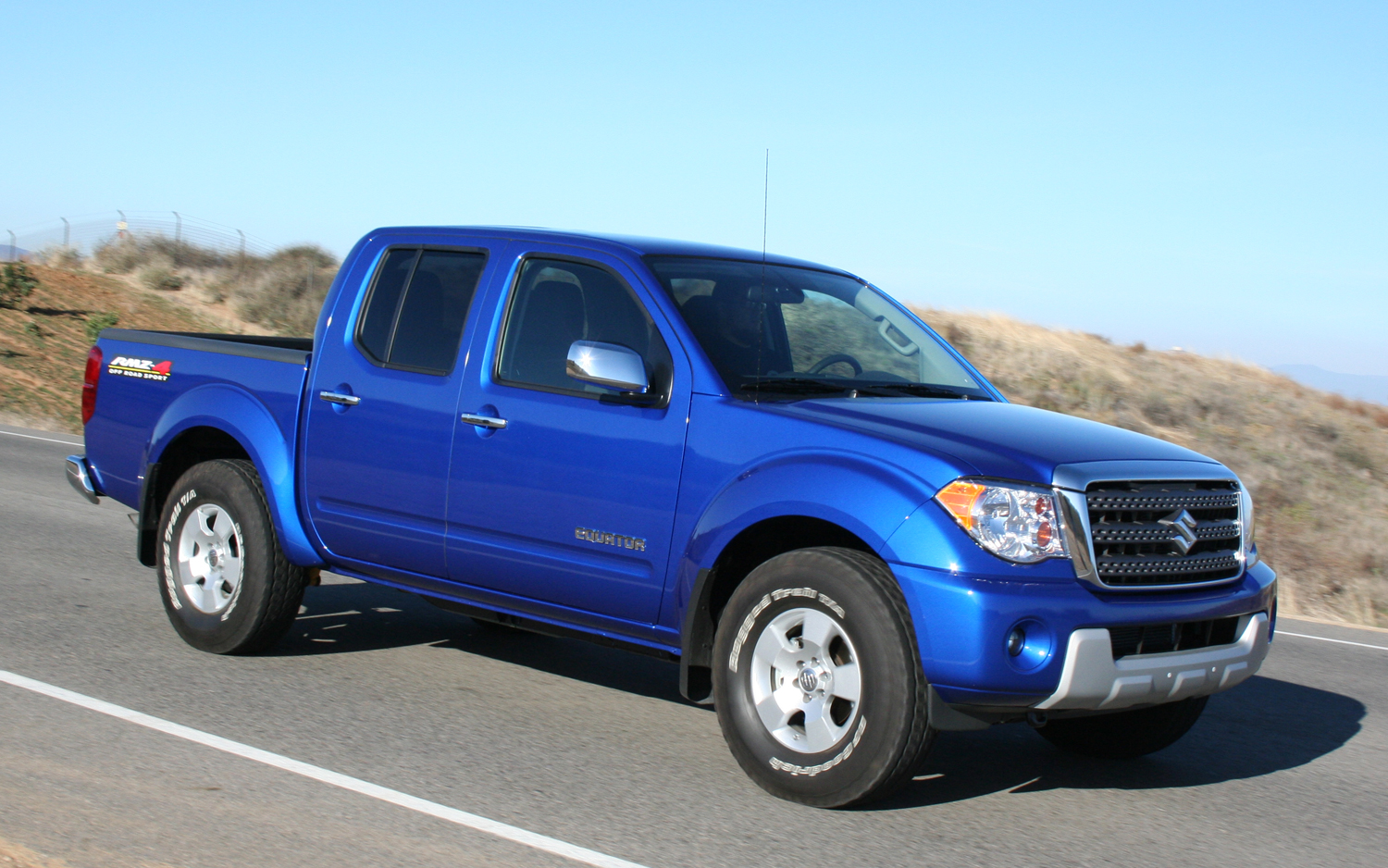 As far as compact trucks go, the Suzuki Equator is a relative unknown. To be fair, many Suzuki products are relatively unknown in the North American market due to a scarcity of dealerships. Unfortunately, that means many buyers are missing out on great, low priced options. The Suzuki Equator was sold between 2008 and 2012. It was phased out as Suzuki reduced its North American presence as a cost-saving measure. 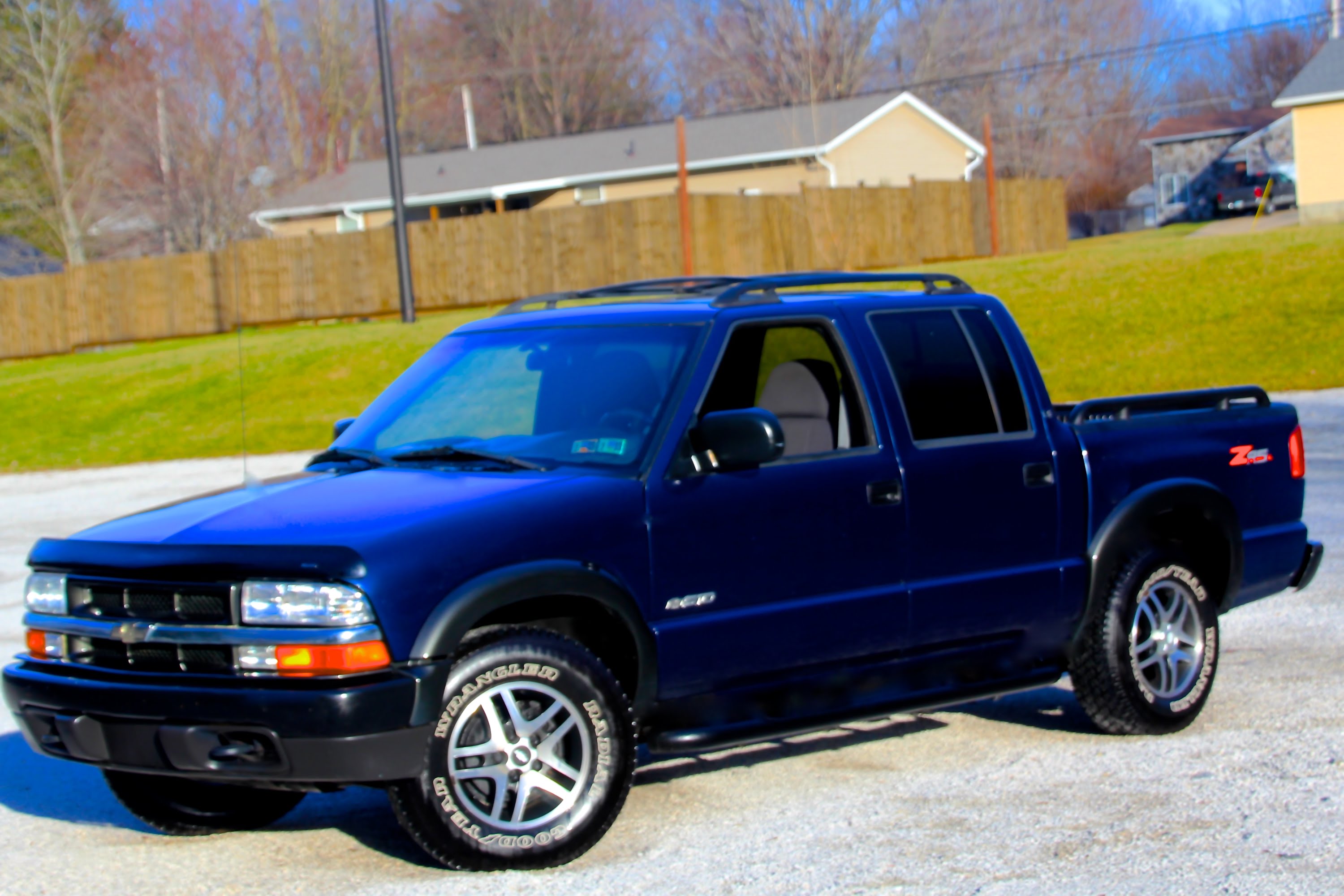 The Chevrolet S-10 is the granddad of the little trucks on our list. The S-10 was introduced one year prior to the Ford Ranger, the next oldest model here. The S-10 ran from 1982 through 2004 when it was replaced by the Chevrolet Colorado. There are still quite a few of these tough, durable trucks on the road today. Many of them make great low mileage options for buyers looking for a used truck.

If you shop for a Chevrolet S-10 produced during the final few model years, it can be powered by two engines. The base 2.2L is capable of 115 hp and 135 lb-ft of torque. The optional 4.3L V6 produces 180 hp and 235 lb-ft of torque. Neither engine produces outstanding payload or towing figures, but both are fuel-efficient and have proven to be long-lasting. As an added bonus, you can buy a fully equipped 2004 Chevrolet S-10 with a towing package and 4WD for less than $5,000.

With so many little trucks on the market today, it can be hard to find the one that will be a perfect fit for you. Hopefully, this list has helped you narrow your choices to just a few. Good luck with your new truck!


The Evolution of the Convertible SUV
10 of the Most Powerful American Cars Ever Made
10 of the Rarest and Most Powerful Classic Muscle Car Conver...
The 20 Longest Lasting Vehicles Available Today
Watch A Toyota GR86 Drift Around an Abandoned Mall
10 Forgotten Off-Road SUVs And Trucks