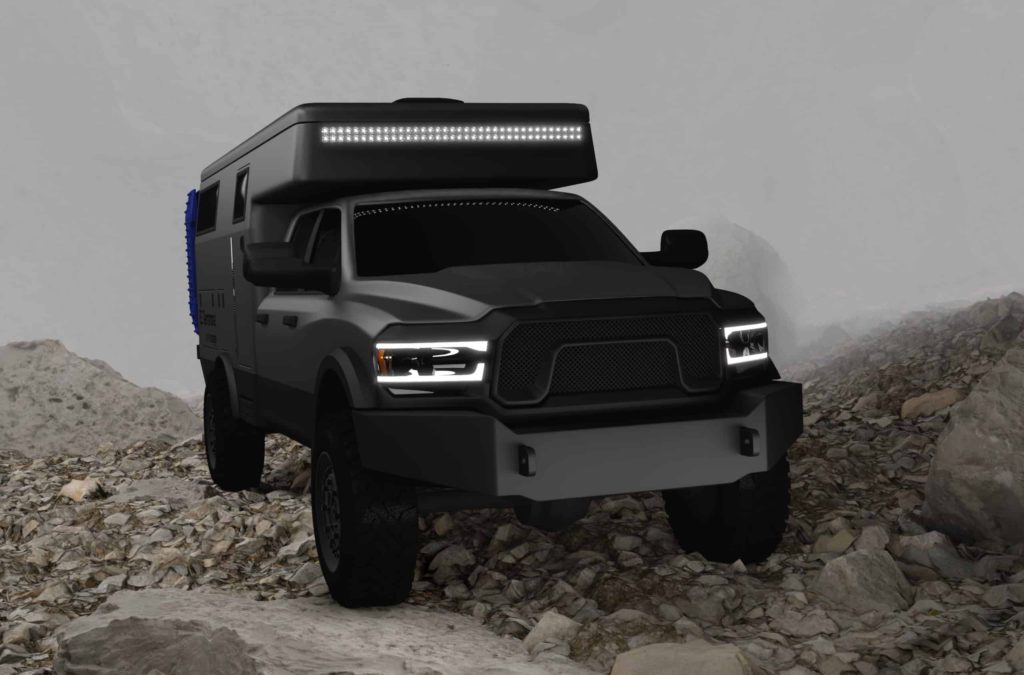 There are lots of RVs and overland campers out there. There aren’t a lot built for serious off-road and international travel. The soon to be released EarthCruiser Terranova is one of those off-road capable overland campers ready for big adventure. Not only is it capable off-road, but also in sustaining up to four for extended periods off-grid in comfort and style.

While the Terranova is currently just a rendering, the first prototype is expected to roll out of the factory before the end of the year. The crazy part is that production units will be delivered as early as Q1 2021. We don’t expect EarthCruiser to miss those aggressive targets either, as the Terranova is a camper that just builds upon all the systems that EarthCruiser already produces and has perfected over the past eleven-plus years. 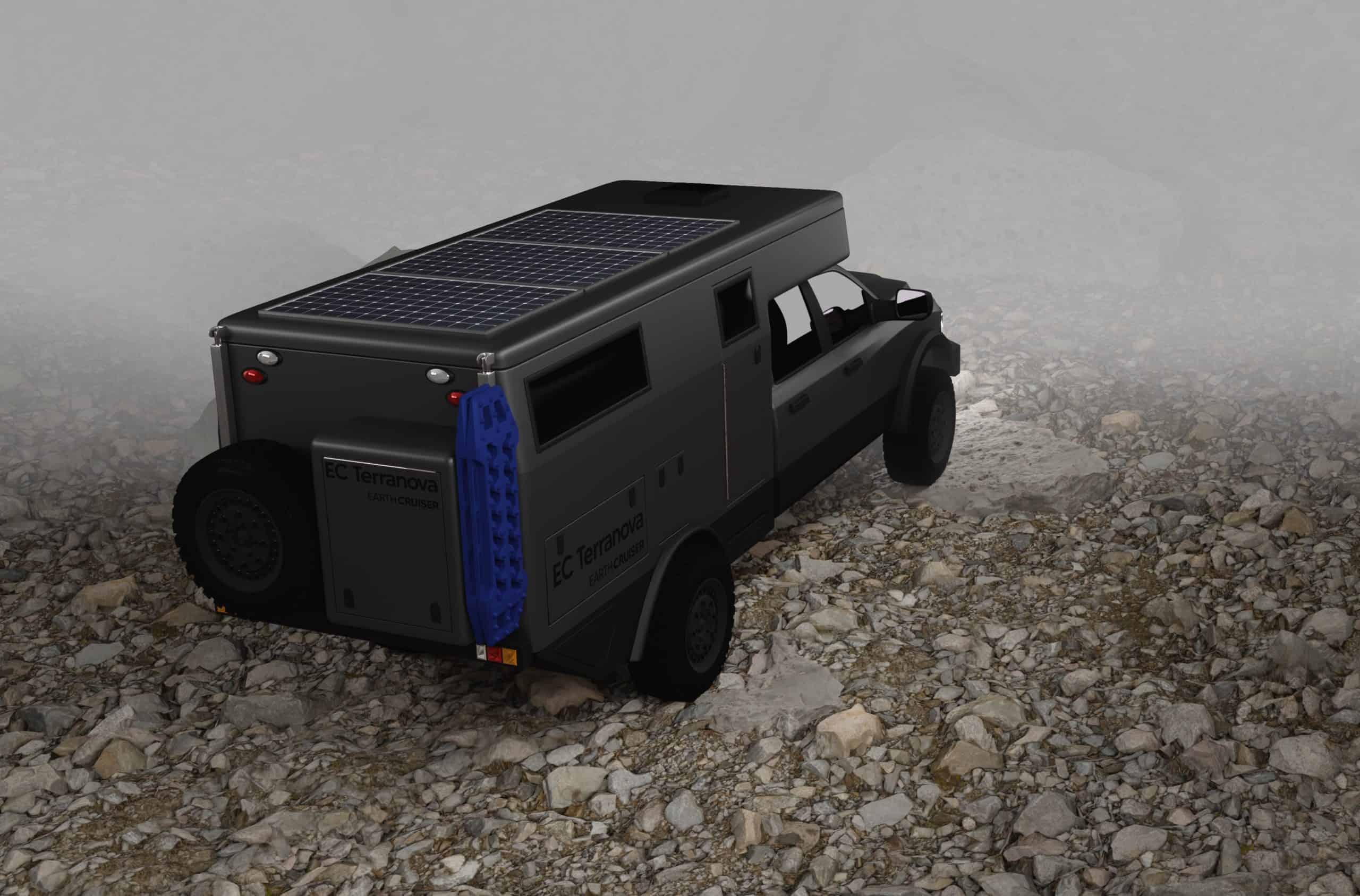 Earthcruiser is best known for its FUSO based overland campers. These campers have been made in Bend, OR, since 2009, and have a longer history than that in Australia where they were conceived. Over the past year, EarthCruiser has even brought a V8 gas 4×4 FUSO to market in North America, with a double-cab option. It has also built out a full line of overland truck campers over the past five years.

The Terranova is a design that basically builds upon the EarthCruiser EXD camper, by adding a cab-over. By having a cab-over design with a bed, the Terranova can sleep and easily accommodate four people. The contoured aerodynamic foam-core composite camper shell is a pop-up design and can be built upon any 2020+ 4×4 1-ton truck chassis. Current options are the 2020+ Ford F350, RAM 3500, and Silverado 3500. By using a big consumer pickup instead of a commercial vehicle like the FUSO, parts and service will be easier to come by, more luxury options will be available, and the vehicle will be more comfortable and familiar to most drivers.

“The EC Terranova Expedition Camper meets customer demand for a cab-over with a choice of domestic chassis. We know many customers feel more comfortable behind the wheel of a consumer-class truck versus commercial and have strong brand preferences. We want to be able to honor that.” -Chad Knight, GM of EarthCruiser. 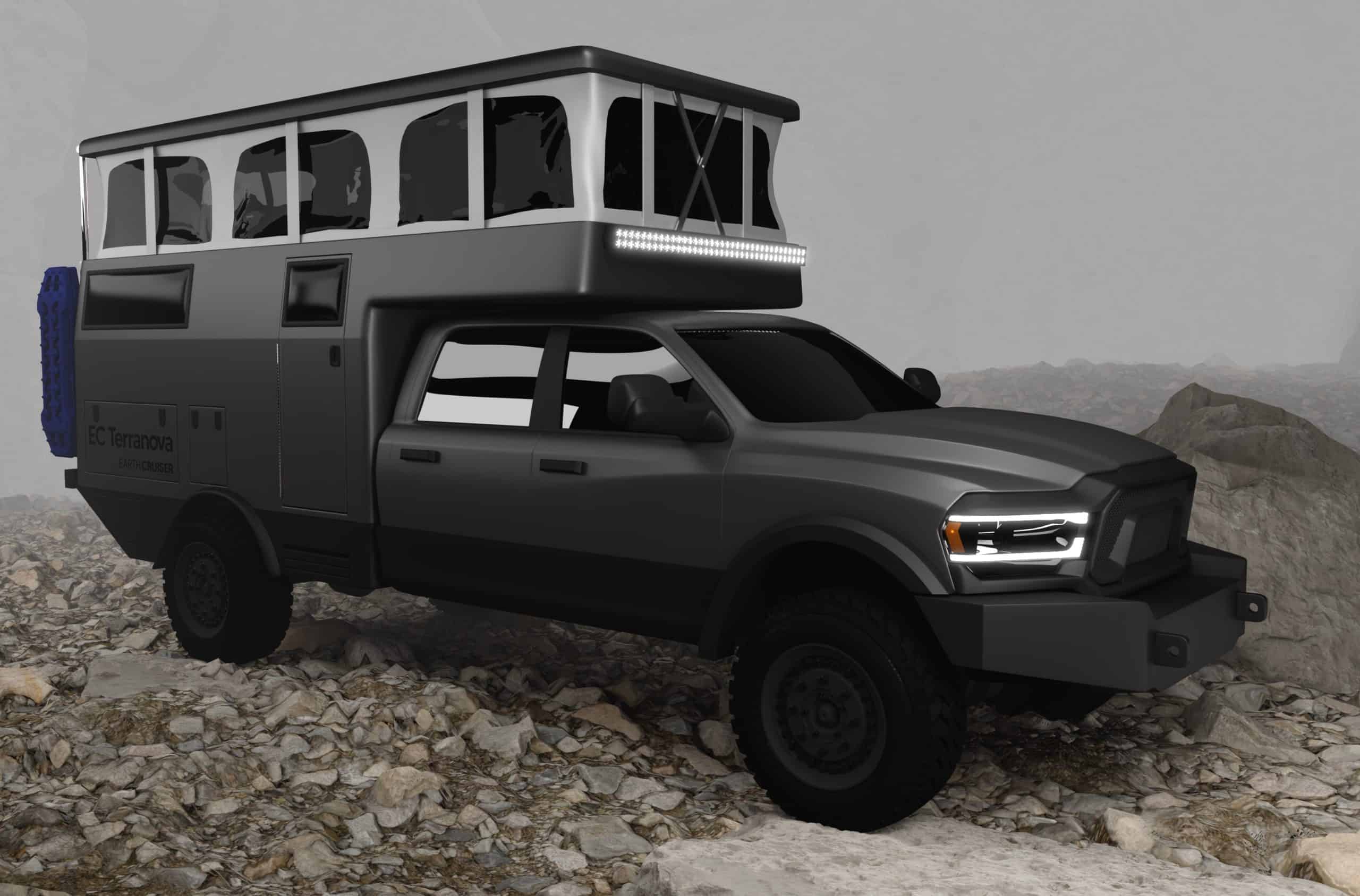 Besides the bed in the cab-over of the camper, there is also a large dinette that converts into a bed. This overland camper is designed for full off-grid adventures for up to four people. Not only do you get a full bathroom indoors, but also a shower and even drinking water faucet outdoors. Also inside is a full kitchen, including an induction cooktop, stainless steel sink, and 12v fridge/freezer.

Storage inside and out is plentiful. This includes storage of electrons, by way of a 108watt roof-mounted solar panel feeding a 400Ah lithium house battery. A DC air conditioner is even an option, but won’t be needed by many. A built-in 200 cfm roof fan along with the 8 openable windows in the tent should allow plenty of airflow in most weather conditions. The tent itself is designed with insulation and a heater is standard equipment, making this a true 4-season camper.

One really cool feature in the Terranova is the shower/greywater recycling system. This system uses 3 different types of filtration to keep hot water flowing, even after you’ve used it to clean yourself or the dishes. This means you can carry way less water on your adventures and take nearly endless hot water showers without worrying about running out of water.

Get Your Own Freedom Machine

All this capability and comfort doesn’t come cheap. The EarthCruiser Terranova overland camper will start at about $275,000, which includes the 1-ton truck that the camper is built upon/integrated with. While that might seem like a lot of coin for a truck camper, it is actually quite the bargain amongst its competitors. We’re not saying it’s inexpensive though!

Not only is EarthCruiser targeting the North America market with the Terranova, but already has plans to get this capable overland camper system in the hands of international customers. The Middle East and Europe are expected to be good markets for this camper. You can preorder your Terranova now, with first deliveries expected in early 2021. You can learn more about the Terranova and the rest of the EarthCruiser lineup at EarthCruiser.com.