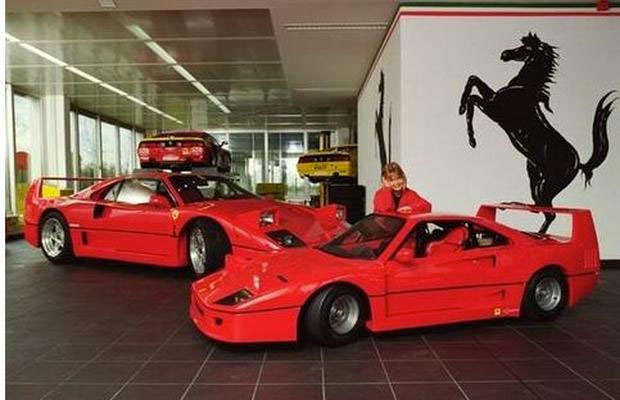 The world in which you get to drive mini versions of your favorite cars is truly a beautiful place. We present you with the collection of 30 minicars that are replicas of iconic cars you can see on the roads today. The “bonsai cars” are not quite comparable with the real cars in terms of performances, but their looks are almost identical. Apart from the size, of course.

Speaking of performances that the mini versions can produce, let’s just say they’re okay. Many of them can go at a top speed of over 40 MPH, but we can’t say that all of them are fully road-legal. Still, you can drive them on track if you are a person of average height and weight.

Note that these replica cars are not production cars. In fact, most of them are made by car enthusiasts who had a passion about a certain iconic car, so they decided to make their own mini version. 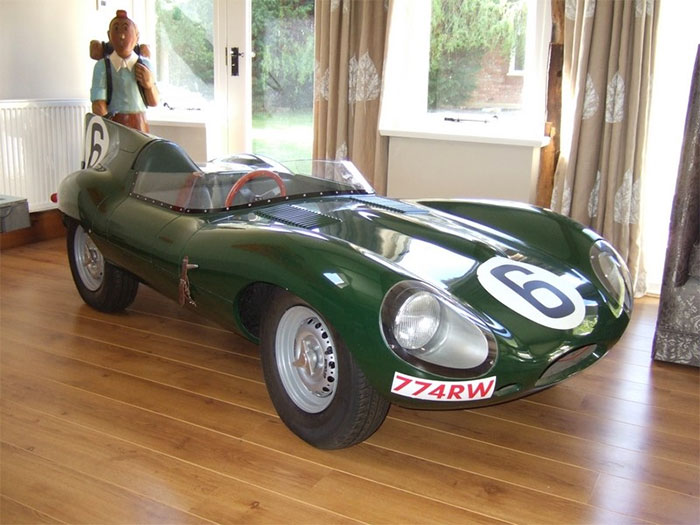 This sports car was produced in the late 1950s and was considered one of the most beautifully designed convertible roadsters at the time. It’s been over half a century since, but car enthusiasts still love this car. That is why it wasn’t a surprise finding out that one of them built their own mini version of the Jaguar D Type Convertible. 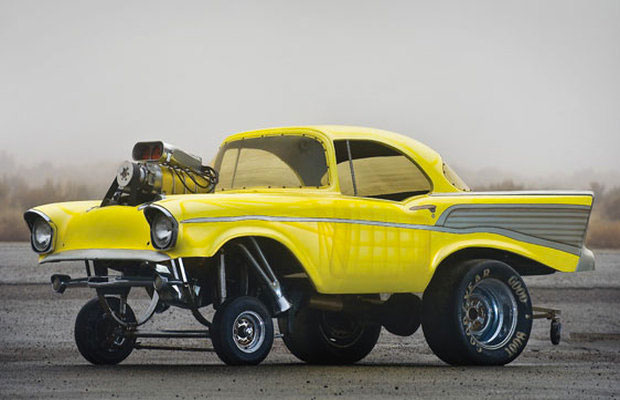 The designer of this miniature version of the iconic Chevrolet installed a superb engine in it, probably with drag racing in mind. Its 200-hp V8 engine makes this small car fly like a bullet with the acceleration from zero to 60 MPH in less than 4 seconds. 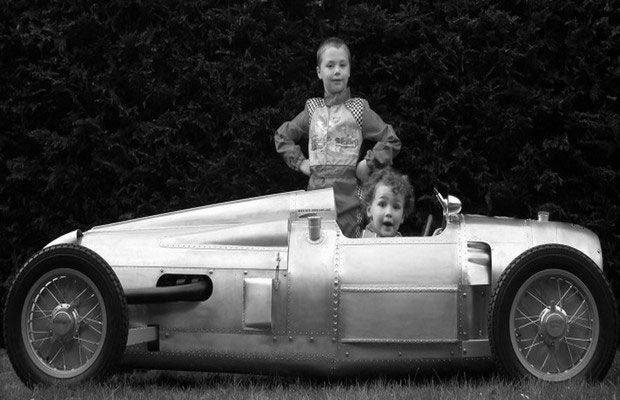 Auto Union Grand Prix type A was constructed in the 1930s Germany as a racing car. From 1934 and 1939, this car dominated the racing track driven by the famous Silver Arrows racing team. When it comes to the 2:3 scale version, it’s equally impressive. The one who made it did such a good job that the car was sold for over $100k in 2009. 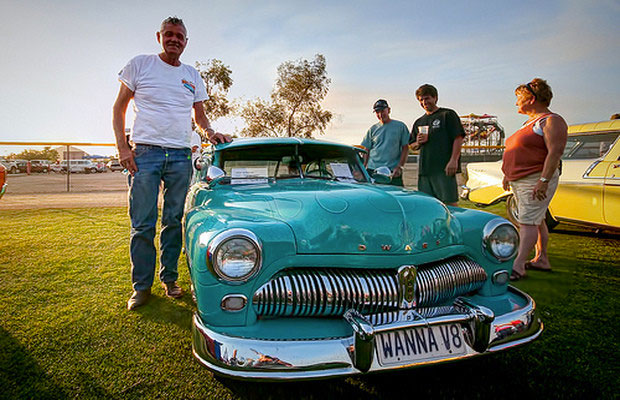 Obviously, the person who made this miniature car spent a lot of time and money on it. It seems it’s worth it as not only it looks amazing, this Merc can also ride nicely. 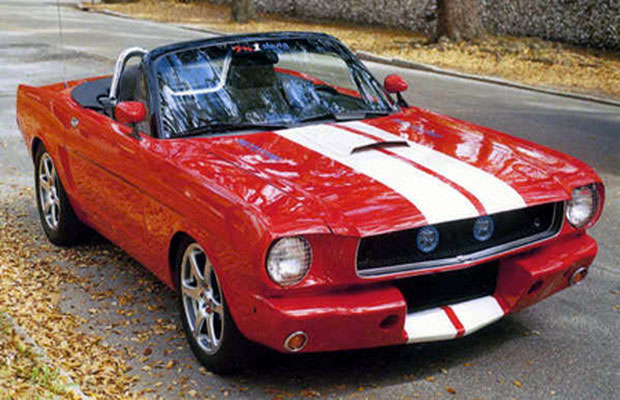 Speaking of iconic American cars, we must not forget about the Ford Mustang. There probably isn’t a kid on the planet who wouldn’t want to own their version of this muscle car.

While the previous entries from our list could be used by kids as toys, this particular car shouldn’t. It was built by a former NASCAR mechanic, who placed a powerful V8 engine under its hood, making it capable of producing the top speed of 150 mph. 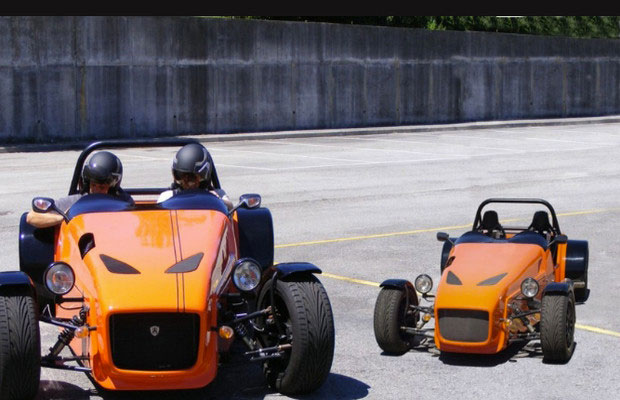 The replica is a perfect racing car for petrol-head families. The two-seater is ideal for you and your kid to go together on a racing adventure. 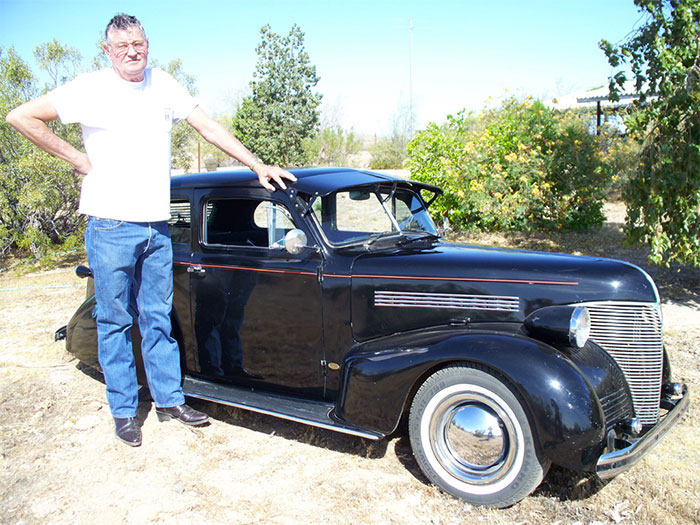 The Chevrolet Master was one of the most luxurious sedans during the 1930s. It also featured a pretty powerful 3.4-liter 6-cylinder engine, which made it superior to most of other cars from the era. This Chevy stayed in a good memory of many car enthusiasts and one of them decided to make a miniature version of it. 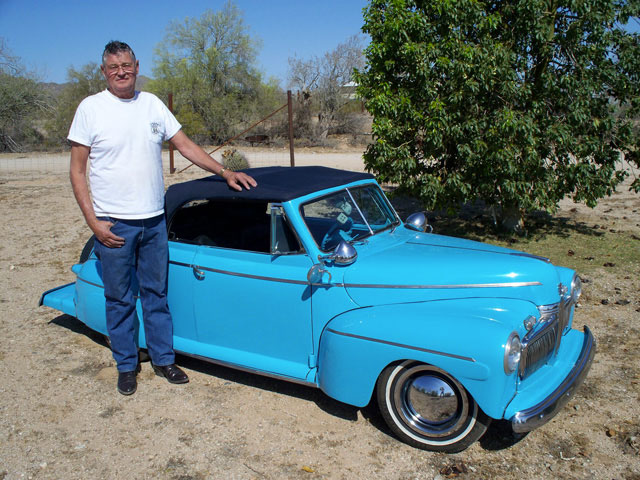 1949 Mercury is one of the cars that define the American post-WWII auto industry. In fact, the car was so popular that it was featured in some of the most iconic films ever, like Rebel Without a Cause or American Graffiti. Because of the car’s popularity, it’s not a surprise that a car enthusiast made a miniature version of it. 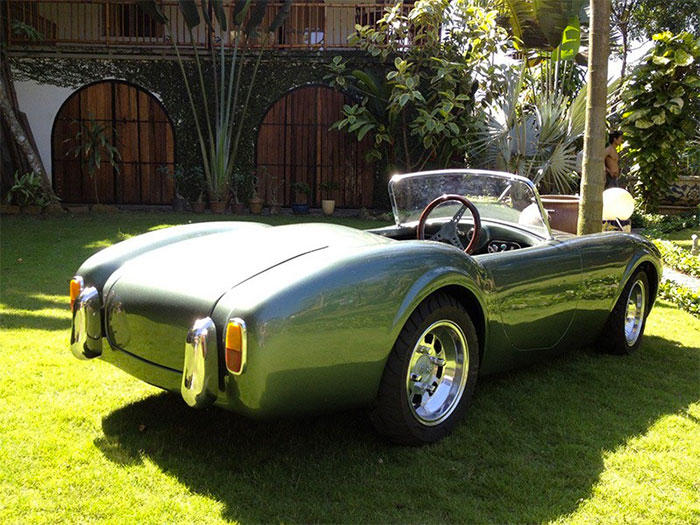 Shelby Cobra was a sports car that was a result of an Anglo-American cooperation. The original version featured a Ford V8 engine, which allowed this 2-door roadster to develop an impressive top speed of 185 mph. Although the replica can’t go that fast, it’s still an amazing piece of work. 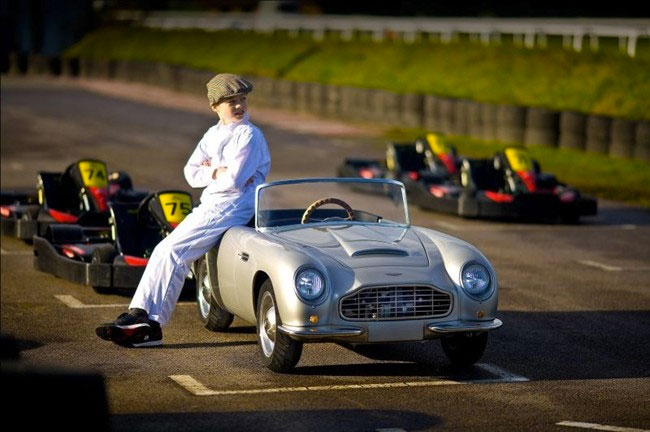 Aston Martin DB models became associated with the agent 007 since one of the cars appeared in the movie called Goldfinger. The miniature version was constructed by a car dealer who wanted to promote driving among youngsters. The bonsai Aston Martin costs about $20k in England today, which is still way more affordable that a real Aston Martin. 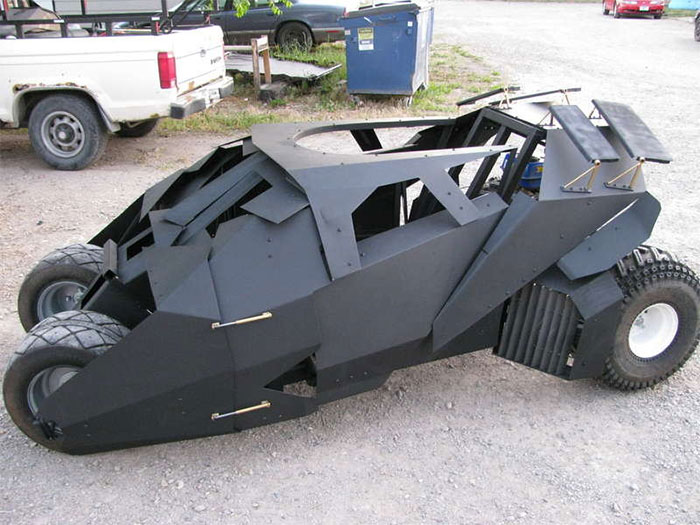 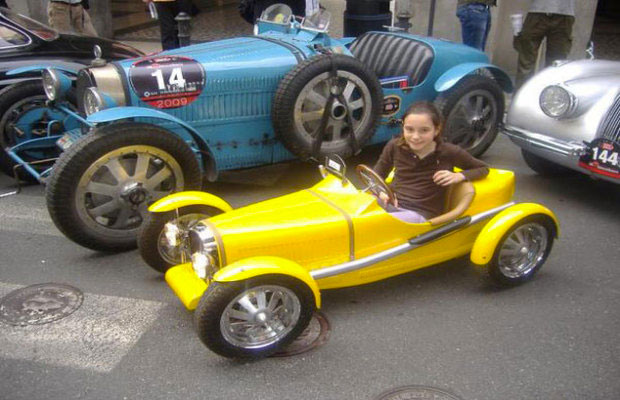 Bugatti Type 35 is probably the most legendary racing car in history. It’s definitely one of the most successful models, winning over 1,000 races since it was developed in 1924. Nearly a century later, a British car design group developed a 1/2 version of this model, which is meant for children to use it as a kart. 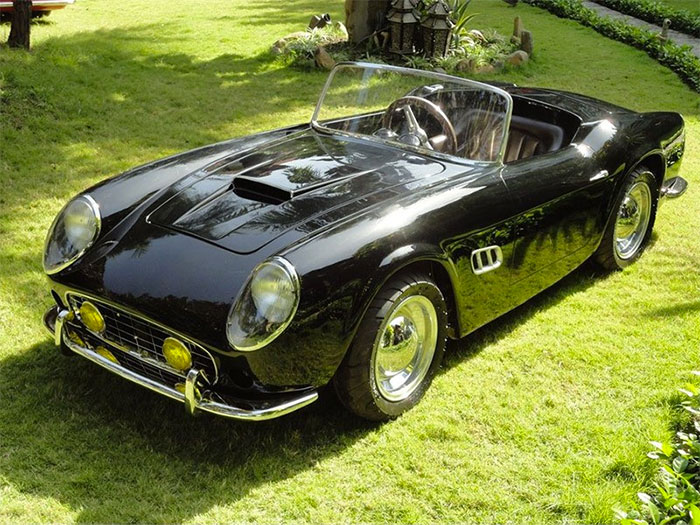 Ferrari build the 250 model from 1953–1964, which was their most successful early line. The cabriolet version is still popular today as a collectors’ item. It served as the inspiration for the constructor who created a mini version of it.

From 1987 to 1992, Ferrari F40 was probably the most craved-about car model in the world. The luxury sports car was designed in order to commemorate full four decades of the company and was personally approved by the company founder, Enzo Ferrari. Recently, a miniature replica of this car appeared on the market at the price of just north of $25k. The two-seat replica is equipped with an 80 cc engine manufactured by Honda. 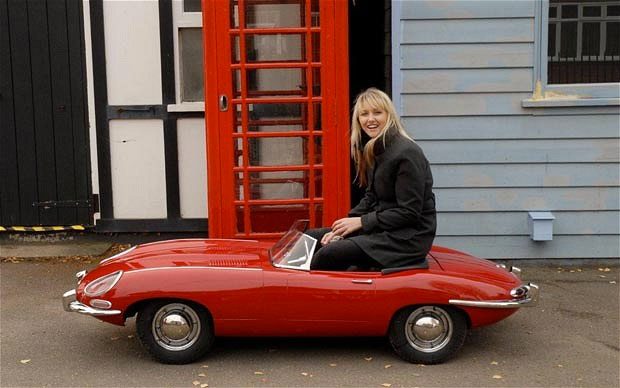 We’ve already mentioned the Harrington Group, which creates expensive car replicas for kids. One of their best works is the replica of the legendary Jaguar E Type, a model produced between 1961 and 1975. 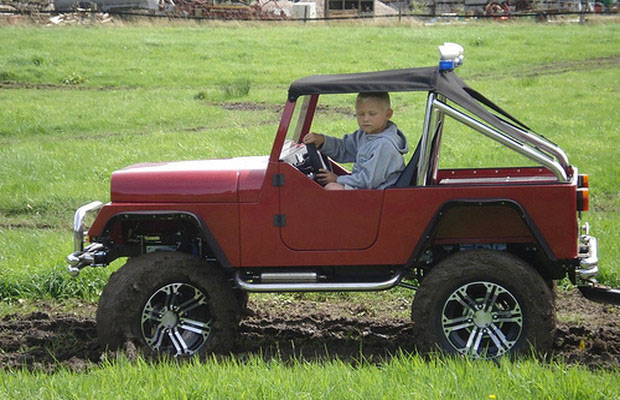 SUVs made by Jeep are known for being large. The 1/2 scale version of the 4×4 Jeep also appears massive. On top of that, the replica is pretty powerful as well, with its 4-cylinder gas engine. 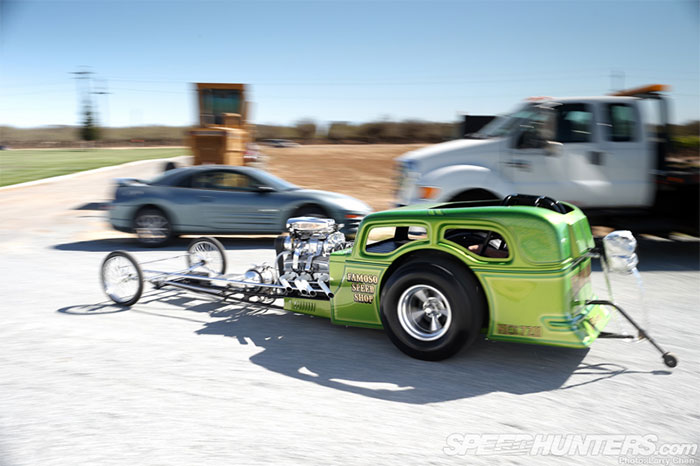 The scaled-down version of the top fuel dragster can produce amazing speeds, although not like the real one. Named One Bad Hombre, this jr. dragster was built by Randy Winkle of Famoso Speed Shop as a present for his son. 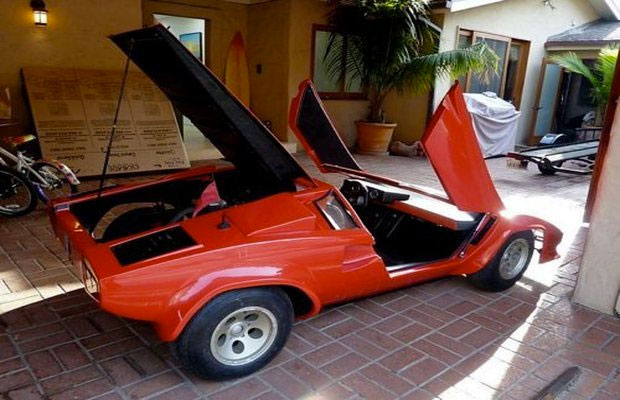 1987 was a good year for kids in America. The oldest kids’ toy store in the US, FAO Schwarz released scaled down replicas of Lamborghini Countach that year, which were able to produce the top speed of 30 MPH. Over 17k of these were sold. 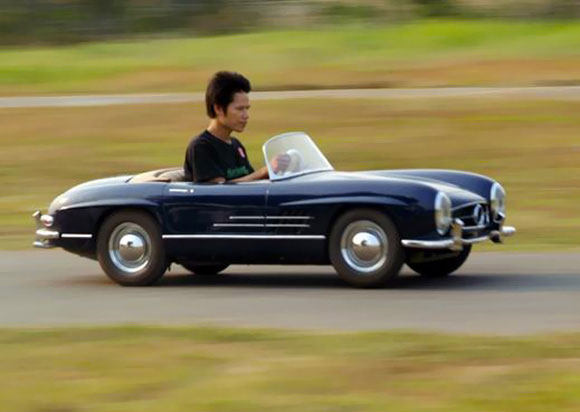 The Mercedes 300SL was introduced in 1954 and became the fastest production car at that point. Its production lasted for almost a decade, making this model become synonymous with two-seat coupés. Rewind half a century into the future and the 300SL is still very popular. In fact, it’s so loved that some car enthusiasts even decided to make a mini-size replica of it. 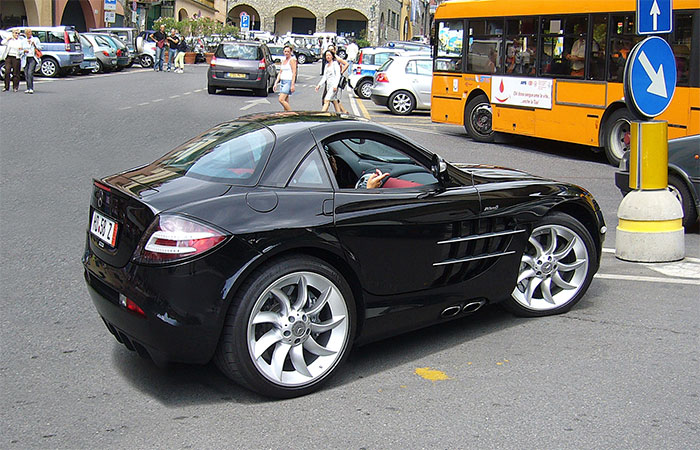 Those who think supercars are too bulky will fall in love with the miniature version of one of the most amazing sports cars in the world, McLaren. It looks stunning and has just enough space to carry a grown-up. 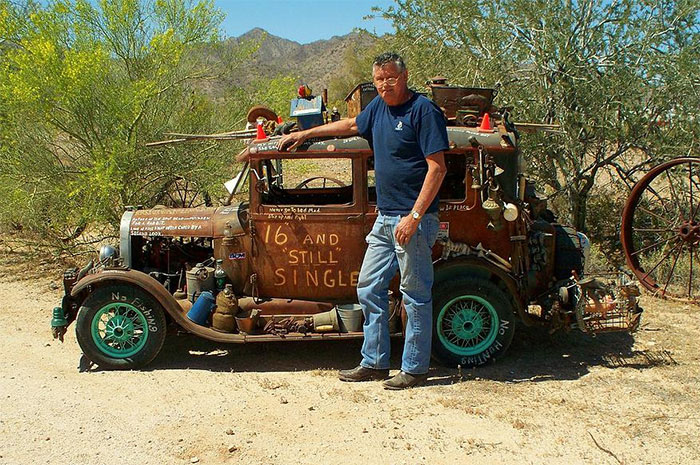 After a huge success Ford had with the Model T, the company released its successor, the Model A in 1927. You can say that this car is the 2nd-most-iconic Ford model ever. When it comes to the mini version of the Model A, this one was made by Ernie Adams, a dwarf car builder. 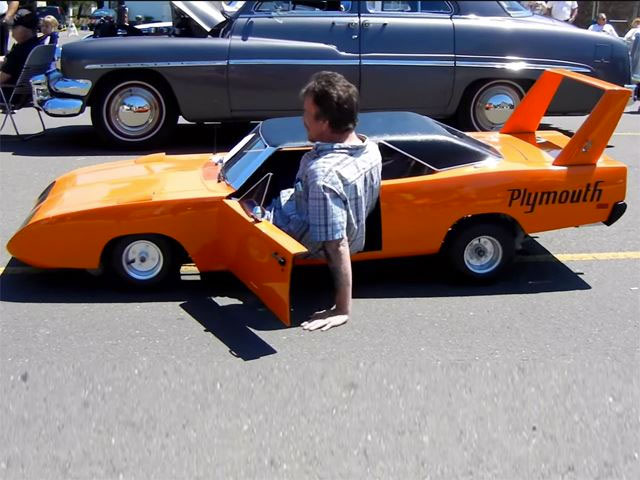 The original 1970 Plymouth Superbird is a powerful beast on the road with its 425-horsepower engine. The replica is not that amazing when it comes to power, but when it comes to the construction, it’s really admirable. The 8-horsepower Briggs and Stratton motor is what keeps this 1:2 scale version made of fiberglass, going. 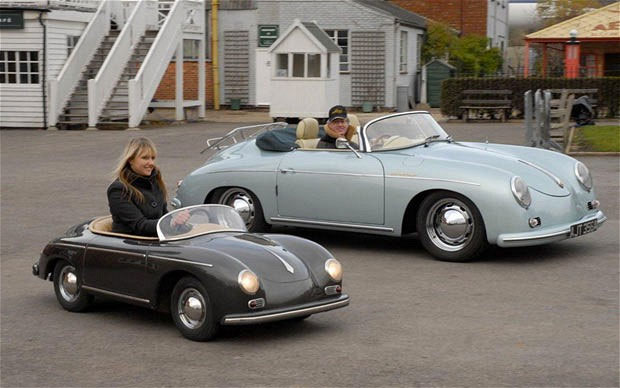 The luxury two-door Porsche sports car was produced from 1948 to 1965, during which period it was one of the most popular cars on the planet. Its fame is ever-present, so it’s no wonder car enthusiasts have come up with miniature versions of it. The 1/2 scale replica with a gas engine can be bought for about $10k.

When it comes to recognizable design, Porsche is unmatched. People simply love the Porsche-look. The only problem with these cars is their price. So, perhaps a better solution is to go with a miniature replica like this one, for example.

The miniature version of Morgan Roadster is meant for children, but there isn’t an adult in the world who wouldn’t love to own this car. The Roadster is designed with 1940s style in mind. When it comes to its engine, the replica is featuring an electronic engine capable of producing 80 MPH.

The classic Cobra was first made in 1962 as an advanced sports car with a Ford V8 engine. The 2-door roadster was loved by many for its speed. Because this car has a cult status in the US, it wasn’t a big surprise finding out that miniature replicas of it exist. 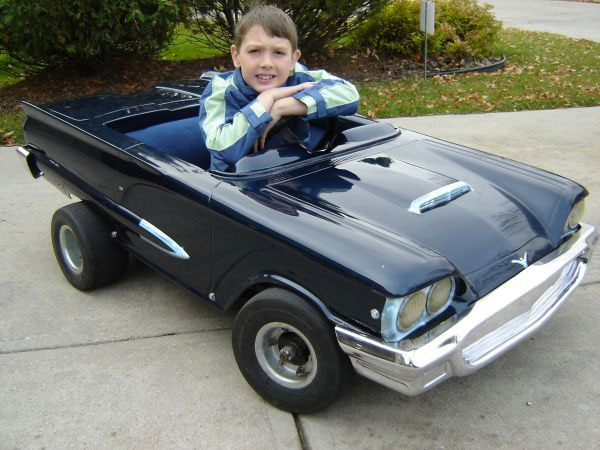 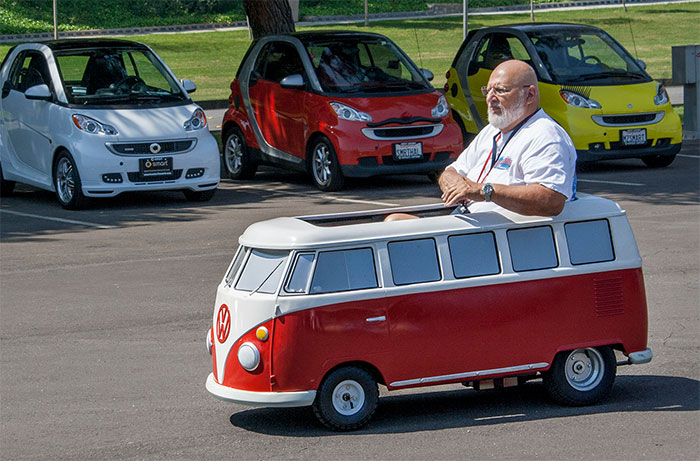 Commonly known in the US as Hippy Van, the VW Bus Van is a car that defines the 1960s. Although the regular version of the van is not in the production anymore, scaled replicas exist. Still, you might wonder what is the point of a one-seat bus van? We think it’s probably to remind people of the good old days.

The Corvette is a car that is a constant source of inspiration. Prince sang about a Little Red Corvette, while a toy company made a small size version of it. You won’t be able to produce a high speed in this replica, but you’ll certainly be able to enjoy its flawless design. It seems those who made the pedal car paid special attention to every detail.


The 2022 Nike One. Fiction to Fruition?
Rolls-Royce Does it Your Way, Announces That Coachbuilding i...
Off-Road Ready Dodge Challenger SRT8
10 Best 2018 Luxury Vehicles
Kia Trail’ster Concept Is All The Soul You Ever Wanted
12 Highest Horsepower Cars in the World