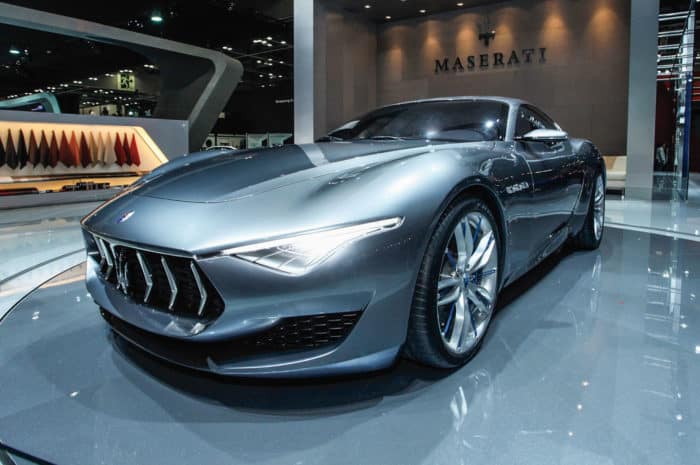 Maserati has always been the exotic car manufacturer that you sort of know about but never really see too much of. A Maserati is a sort of acquired taste, whereas a Ferrari is something that just about everyone wants in one form or another. The Maserati brand has come a long way in terms of design and implementation. There was a period when the Maserati brand had become something short of obsolete. The cars were outdated and there wasn’t any new consumer interest being generated. But then the Maserati Levante hit the market that all changed, and suddenly there was consumer interest in the brand again.

Maserati has always been sort of a boutique-style vehicle. Whereas a Ferrari or a Porsche would get more of the limelight. For a long time, the Maseratis were very extreme in terms of styling and you didn’t see these cars being flaunted. But the secret of a Maserati comes under the hood because each of these sports cars is powered by a Ferrari engine. Once you find this out you realize that you have something very special. Cars like the Quattroporte have graced our roads for decades. Silently going about its business and building up a following.

With the brand experiencing a resurgence there has never been a better time than now for new models. Maserati has a couple of things down the hatch that is going to bring the brand into the next generation. First and foremost is bringing the brand into the same popularity of other luxury exotic car brands. Maserati will be a much more popular offering into the future and we are going to be taking a look at the 2021 offerings. 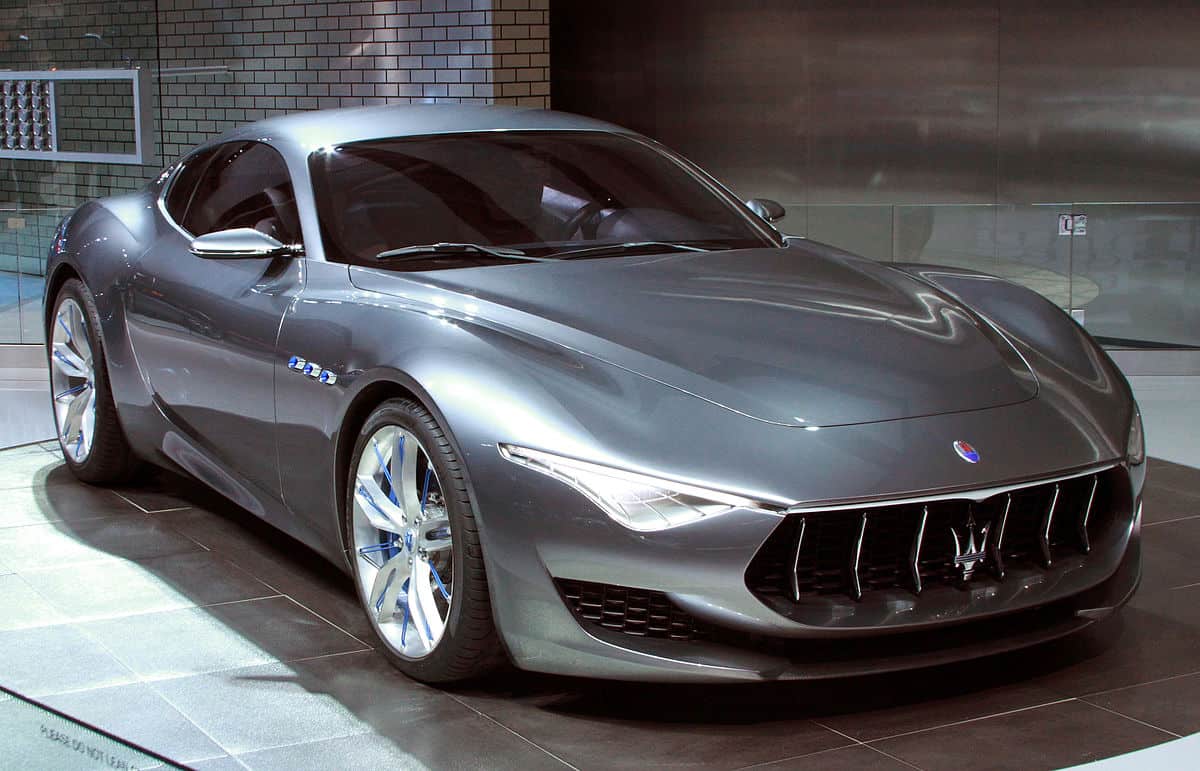 The Maserati Gransport has finally exited production for the 2019 model year and now it’s time for the new replacement. There has been talking about Alfieri for the last couple of years and now the concept is a reality. The Alfieri is going to bring a good sense of style and sportiness to the Maserati lineup at a time when it has become stale. We can expect that the Alfieri is going to feature a lot of the beautiful bodywork that was in the concept version of the car. Beautiful sweeping lines have made the Alfieri a beautiful example of what a sports car can be.

Because the Alfieri is going to be an entirely new model it will come with either a turbocharged V6 or an all-electric powerplant. The all-electric version of the sports car might be very reminiscent of the original Tesla Roadster. If Maserati is going to market an all-electric roadster this could be it for the brand. The overall design of the car is going to propel it into the future and help it to compete with electrified offerings from the Jaguar brand as well. 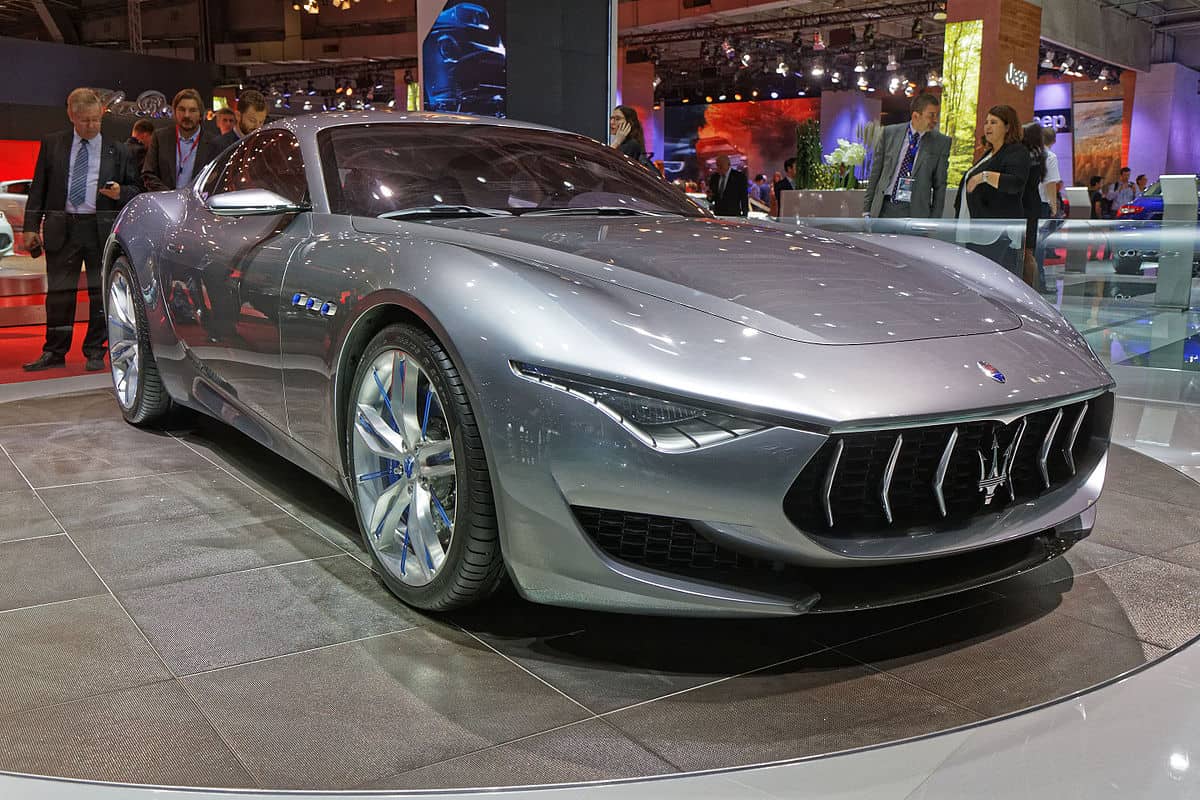 There’s going to be four trim lines planned, which will give buyers a lot of different options. The GranSport will, of course, be the most expensive package. If you want to speed the GrandSport is going to be the best way to go. The engine choices are still going to be scarce at the moment so you’ll need to make a guess. There could potentially be a Ferrari derived V-12, in addition to a few V8 options that were available on the previous models as well. Again it’s still not sure if there will be an all-electric option or not. Because this is still up in the air as Maserati is contemplating putting electric power in a variety of different vehicles right now.

Fuel economy will still be a strong point for the car, even if it has a bigger engine. The Ferrari derived engines have always been decent in terms of gas mileage. There could be a 200-mile range for the gasoline engines and the electric powertrain still isn’t known as of yet. Either way, the car will still be a powerful offering that has a good deal of economy. Of course, when you buy a car in this price bracket you probably aren’t going to be wondering about the gas mileage, to say the least. The performance of the Maserati Alfieri is going to be a major selling factor for this new sportscar and something that the brand has lost in previous years. 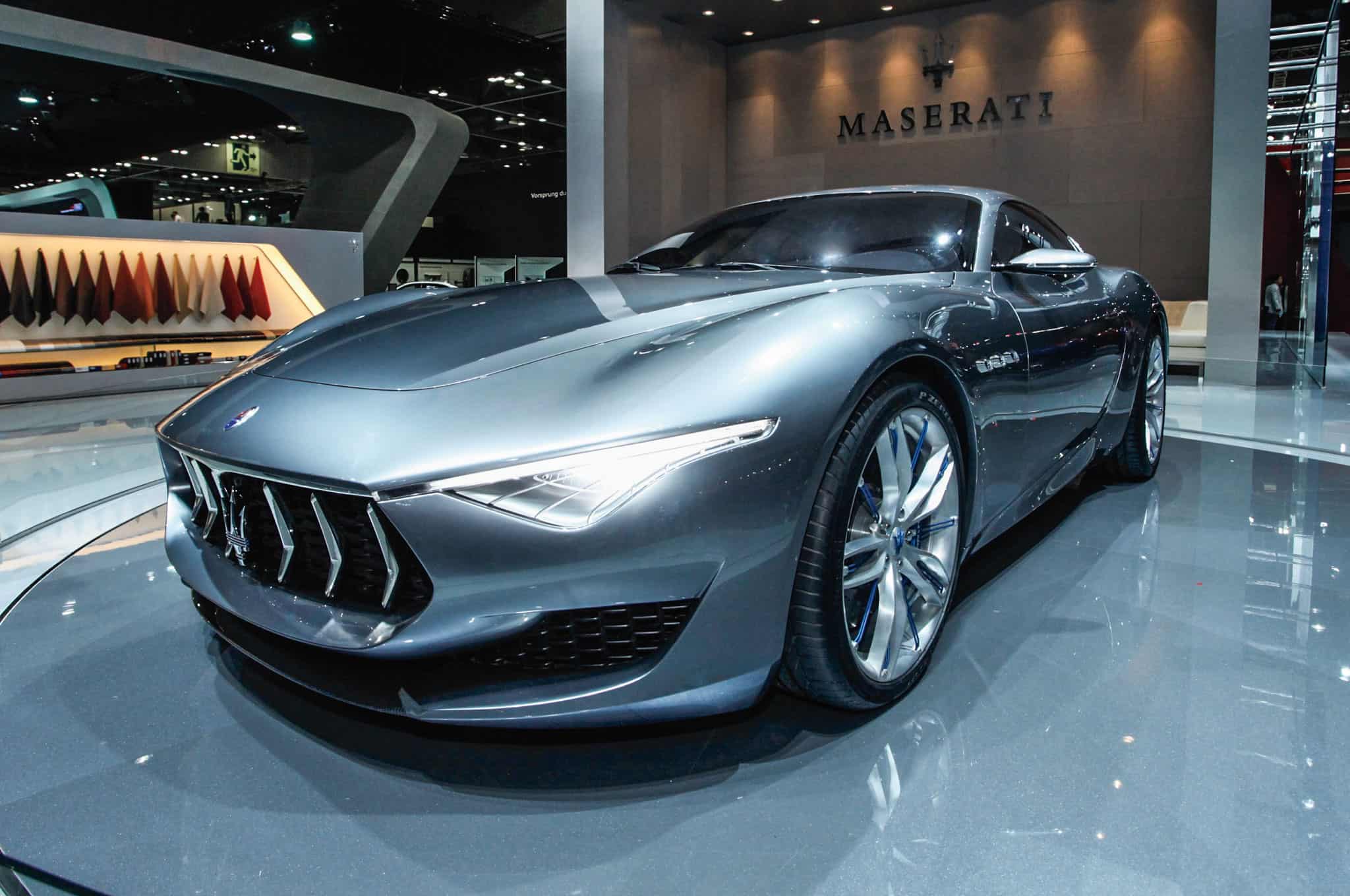 The interior is going to be one of the most updated parts of the car. The GranTurismo had a dated interior when compared to other sports cars on the market. The new interior is going to be holding all kinds of new tech that you’d expect in a car of this price range. Racing inspired seating is sure to be a must and there will be 4+4 seating as that is a staple of the Maserati sports coupe. The seating arrangement is a big plus side of the sports coupe that you’ll see but the cargo area will also be quite large. The interior is still going to be a vast improvement over previous models that have been sold by Maserati.

Infotainment systems are a big part of any new technologically advanced vehicle. Here is why Maserati is going to be throwing in all of the stops, and this will create a fun driving experience. There will be Apple Car Play and Android connectivity. Which will help most devices to sync with the car. There will also be features like a wireless charging pad which makes keeping your phone charged during the commute an easy one. There are plenty of connections sports and if the car is electric there will be sure to be a rapid charge ability. The electric powertrain option could be a fun way to enjoy a Maserati. 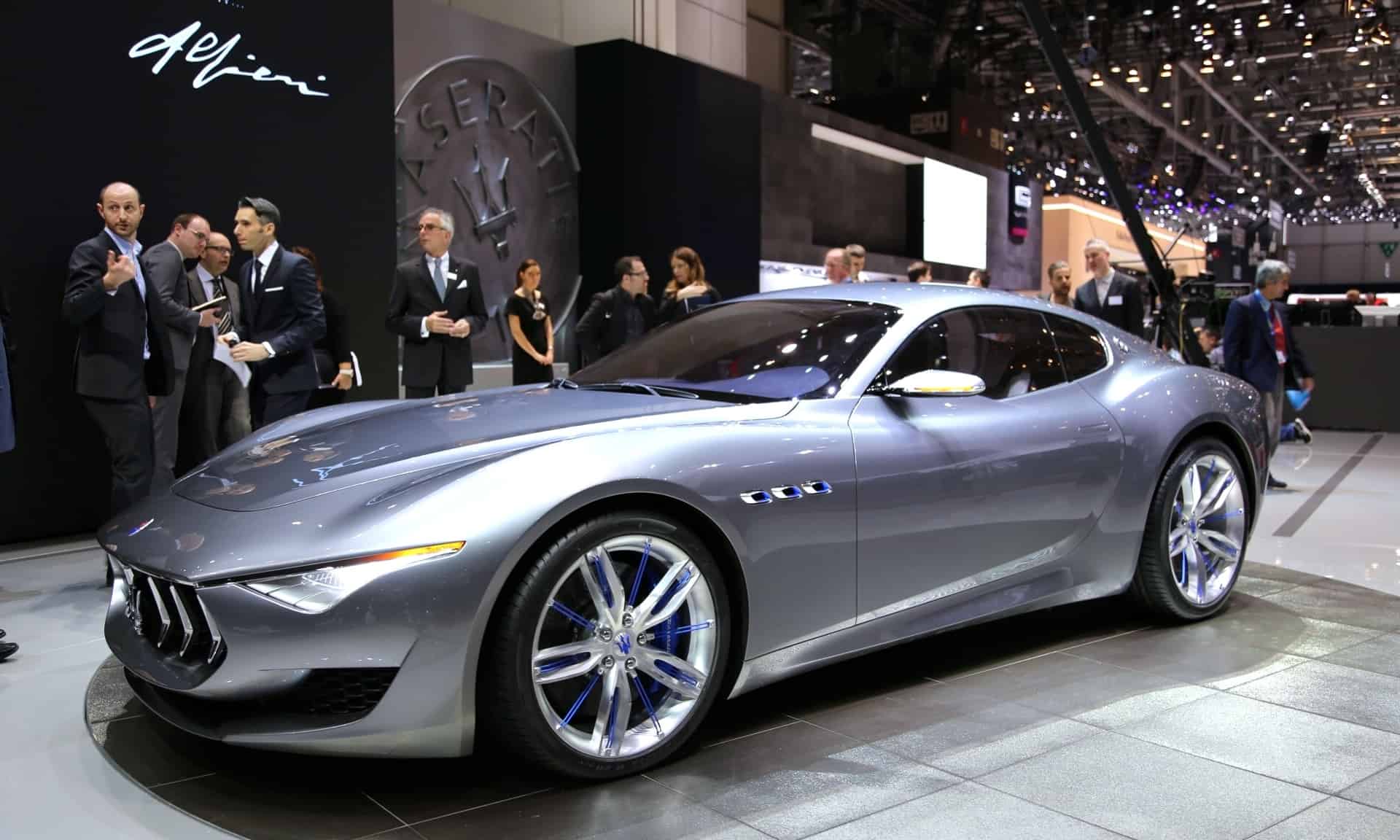 The safety is going to be another important part of the 2021 Maserati Alfieri. The sportscar will have that lane departure feature, which helps to keep the driver and occupants safe. Self-parking will also be another strong feature and the car is sure to have lots of cameras to aid in driving and backing up. There are also going to be various parts of the safety system such as airbags. The overall design of the sports car will be very safety oriented and it will be interesting to see what other features will stand out from the crowd. The Alfieri is a stand out sports car and one that might be able to get a good deal of people back into the Maserati showrooms. 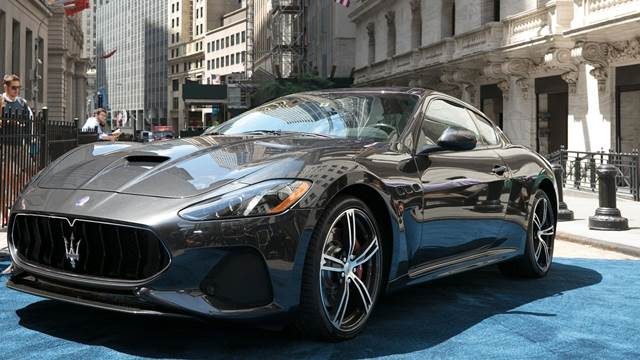 In addition to the main new sports car that’s going to be hitting the market the Maserati brand has a five-year plan to make the lineup electric. The GranTurismo is going to return to the market as an all-electric vehicle. The plans are still foggy this early in the year which is still giving us time to see what kind of new technology will come out. Maserati, of course, wants their electric cars to be fast and fun to drive. We have to see how much the cars will be able to compete with the likes of Tesla.

The GranTurismo will have an extensive range on it, which will give the car enough pleasurable driving time to make it memorable. The details are still grey but the electric GranTurismo could be very fun to the driveway to have an electric car. One of the most important aspects will come down to how much time it takes to get the car charged up and back on the road. And of course how much the repairs could cost as well. If the electric GranTurismo could be fun to drive sports car things might work out very well for the brand. 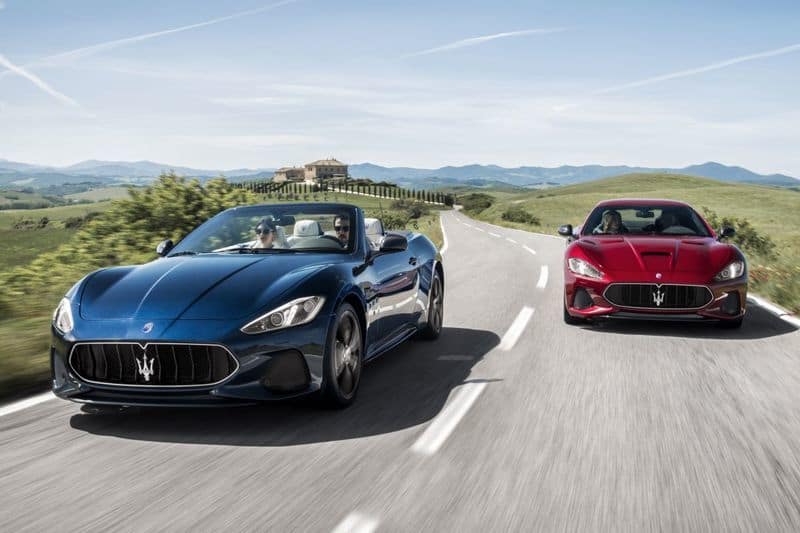 Another Maserati is going to be hitting the market again for the 2021 model year. The GranCabrio is going to be a high powered roadster that will live up to the high standards that have been set by Maserati miles before it. The engine choices are still up in the air but it is sure to at least be a V8 engine which will give the car a good-sized amount of performance, to say the least. There could potentially be a V12 engine as well, both of which will be Ferrari derived as with most Maserati models. The convertible top is sure to be an electric one as that is what’s popular on cars like this.

Being in this price range Maserati is sure to pull out all the stops to get the car relevant.
The GranCabrio is going to have a couple of new technology features implemented into it. The new infotainment center will be the top thing for the new convertible. Connectivity is going to be a finer point of the new Maserati lineup, but other features will stand out on the GranCabrio as well. Even not just being an electric powered roadster the GranCabrio will be a stand out sportscar that gets people back into the showrooms. It will be interesting to see how the GranCabrio will be able to carve a niche into the exotic sportscar marketplace.