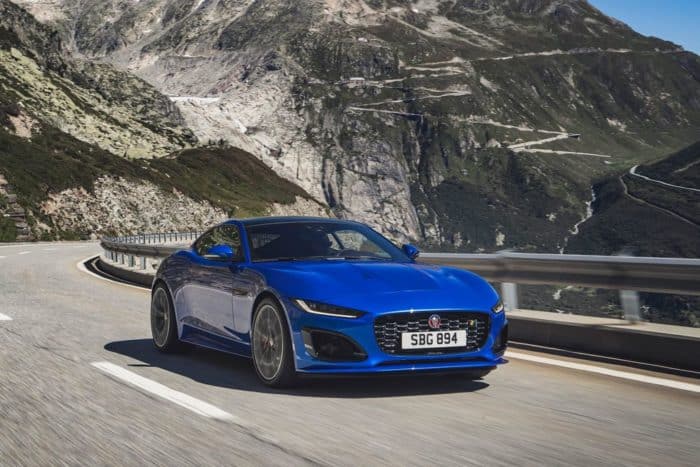 The Jaguar brand has changed a lot over the past decade. The brand has experienced a resurgence in quality and popularity thanks to parent company Land Rover’s continued dedication to excellence. Jaguar is an entirely different breed of a luxury car, one that’s designed to incite passion in the owner. Jaguar is a brand that has a historical focus on performance, which is why Jaguar is known as the “drivers car”. Throughout the history of the brand Jaguar vehicles have found a way to blend exciting performance with sleek gorgeous looks.

True to its form Jaguar is back building some of the most beautiful cars on the road today. When you see a Jaguar vehicle you can’t help but stop and stare. There was a period not too long ago were Jaguar was not even on the radar of luxury car buyers. Yet the brand has found a way to prevail and the 2021 model year is going to be one of the most exciting times for the brand. Jaguar owners are a picky bunch, and with each update, the company carefully makes changes to the product line.

For 2021 the brand is going to be placing emphasis more on performance as well as crafting electric vehicles. Last year we saw the I-Pace make its debut, and to everyone’s surprise, the car became a hit with consumers. But Jaguar is not ready to give up on the gasoline car just yet, and 2021 is going to introduce us to a new breed of Jaguar performance. The luxury brand is out to make a statement with their newly revised sports car. There is no doubt that the Jaguar brand is going to be doing some noteworthy updates to the lineup for the 2021 model year. 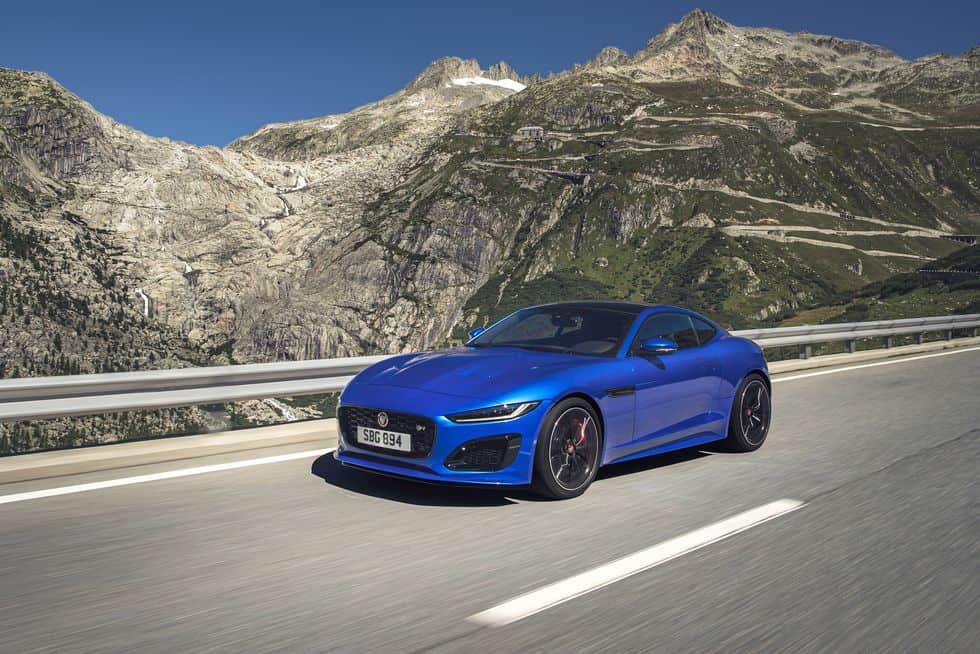 Jaguar is introducing a completely revamps F-Type sports car for the 2021 model year. The F-Type has received many accolades over the years for its stellar performance. The outgoing F-Type is an excellent sports car, one that offers a plethora of features. But 2021 is going to shine a new light on the already popular sedan. Jaguar has tweaked a good deal of the F-Type to appeal to a serious performance car buyer. The F-Type isn’t like any other sports car on the market that that’s what Jaguar was going for. For the 2021 model year, the F-Type has gotten a completely revised exterior, sporting a much more aggressive look.

Slimmer headlights and an aggressive facia are just a new of the upgrades. A new mesh pattern grill up in the front give the F-Type a new aggressive look. Things in the new front treatment continue to the new clamshell hood, complete with a more aggressive pair of air vents. Around the back, there are minimal changes that keep the car in line with the styling that made it popular. The rear end includes an updated pair of rear vents and a revised lighting cluster. The overall styling of the F-Type is very sporty and gives the sportscar an exotic look, almost remnant of Aston Martin. 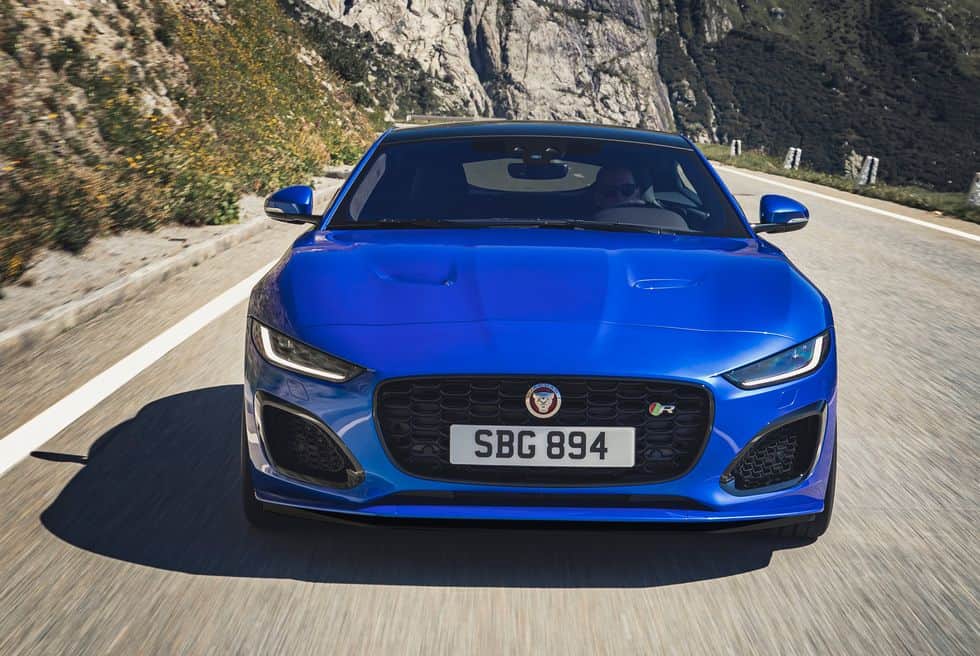 Inside the cabin, things have gotten a nice refresh as well. The instrument cluster has gotten a nice overhaul for the 2021 model year. The 12.3-inch screen located behind the steering wheel offers a few different options such as three display themes and a built-in map. Because the F-Type is a driver’s car the map is a nice feature and something that you don’t see often. Following in the tradition of other expensive sports cars the F-Type has an infotainment system with Apple CarPlay and Android Auto. In addition to those little advancements, there is also the ability to update over the air.

The seating inside of the F-Type has always been a strong suit. The 12-way Windsor leather seats have enough support for serious track driving. Yet, there is also enough comfort for everyday driving that you are bound to encounter. The overall design of the interior has come a long way and features all of the high-end stitching and features that you’d expect in a Jaguar. The company has put a lot of emphasis on updating things both inside and out. 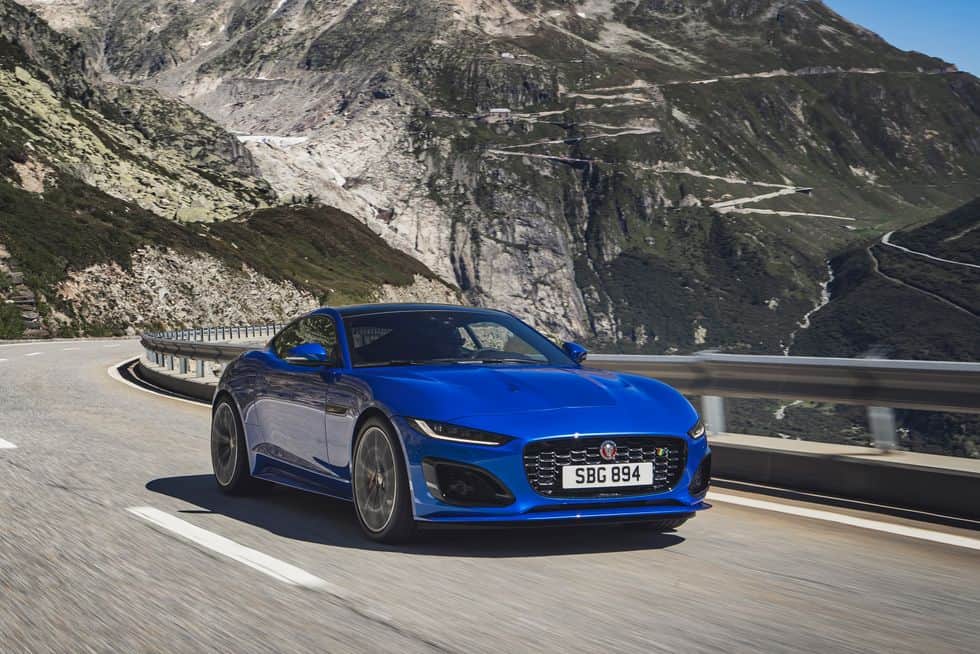 There will be three engine choices in the 2021 model. The most common is going to be the turbocharged 2.0L four-cylinder mustering up a 296 hp and 295 lb-ft. Move up to the R Dynamic model and you’ll get the 3.0L Supercharged V6 that churns out 380 hp and 339 lb-ft. The V6 is a carryover from the previous model year. The engine that is going to be getting all the attention is going to be the supercharged 5.0L V8 engine. There have been 25 more horsepower for the 2021 model year which brings the tally to 575 hp and 516 lb-ft.

With a staggering 0-60 time of 3.5 Seconds, the F-Type is ready for the track. With a groundbreaking new design, the F-Type is among one of the most appealing sports cars of the 2021 model year. 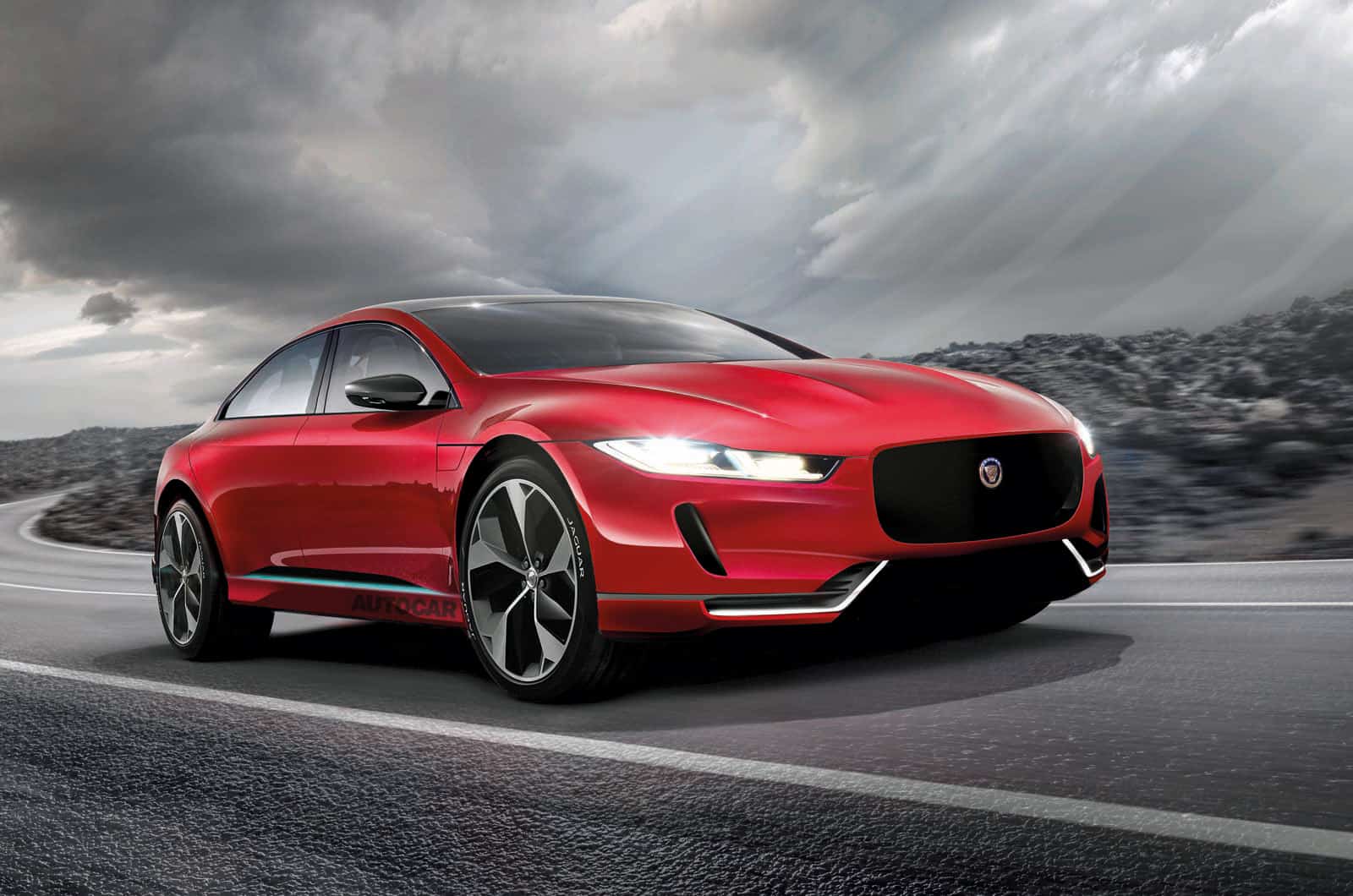 The Jaguar brand is going through a lot of changes for the 2021 model year. Among those changes is an overhaul to the Jaguar XJ sport sedan. The XJ has been an instrumental part of the Jaguar lineup since the 2010 model year. The sedan has a good amount of performance and sporty appeal. These are attributes that Jaguar hopes to keep going into the 2021 model year as the XJ gets a revamp. The XJ has become one of the most dated luxury sedans on the market. If Jaguar hopes to survive the brand will reinvigorate the XJ.

For 2021 Jaguar has all but confirmed that the XJ will be switching to an all-electric platform. The next-generation XJ is going to be based on Land Rover’s new all-aluminum architecture. This has given the brand a significant edge in developing all-electric vehicles. The all-electric XJ is going to compete with the likes of the Tesla Model S. From a design standpoint the XJ will be a careful evolution of the current design. Jaguar has been careful when it comes to evolving the current design scheme.

We can expect to see a 300-mile range, in addition to potentially having the same supercharging stations as Tesla. With a best in class range and the performance to match the XJ will have a strong possibility of competing with the Tesla Model S. Jaguar has been pretty much obsolete in the luxury sedan segment for some time now. As the brand transitions into the electric car market, the XJ could be a serious contender. The sedan is going to boast attractive looks and performance that’s unbecoming of an electric car. 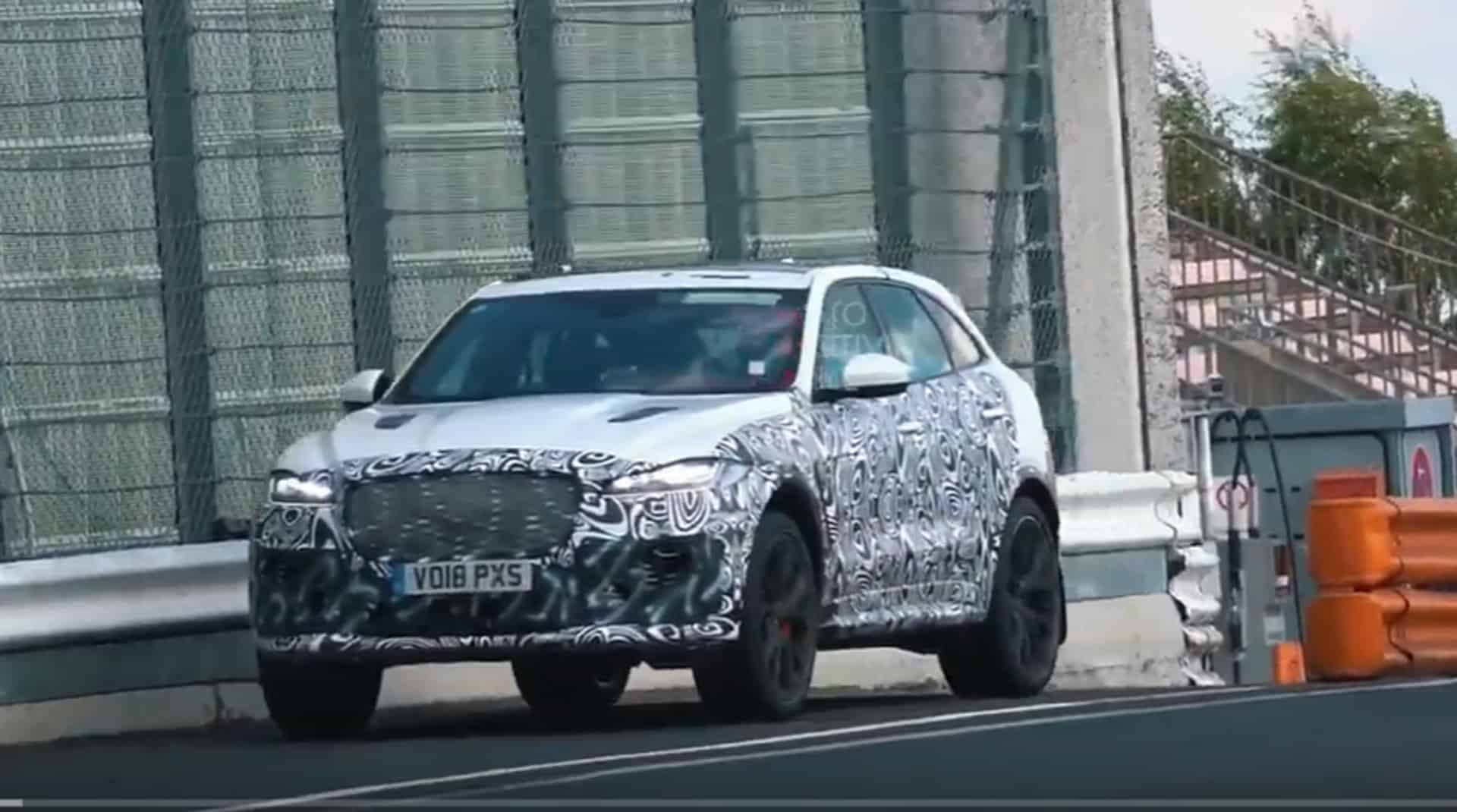 Jaguar has had a resurgence in recent years and the F-Pace is still a fairly new car. Introduced for the 2017 model year the F-Pace was something new for the brand. Now it would appeal that the car is going to get a slight overhaul. Jaguar is making minimalist touches to the vehicle for the 2021 model year. These touches are going to bring the F-Pace in line with the rest of the new Jaguar cars that are coming. New styling touches won’t affect the shape of the car, instead, they’ll be relegated to things like a new mesh grille.

The front bumper is also going to be smoothed over, to give the car a more elegant look. The overall shape of the F-Pace was never bad, and the SUV received high praise from the automotive press. But these subtle changes will give the SUV a nice refresh as increased competition comes out of the woodwork. Outback in the rear of the vehicle there appears to be a subtle redesign as well. Jaguar is still keeping things conservative but the rear of the SUV is going to be considerably slimmer. But that shouldn’t deter the loyal following who are already snapping these luxury SUV models up.

There is no word yet on any interior upgrades but it’s safe to say that Jaguar is going to take it conservatively with that as well. The interior of the F-Pace has received a fair amount of praise in the last couple of years so changes will be minimal. A new infotainment center will be the first edition, as well as new and improved safety items. The same racing-inspired seating will most likely be found on the 2021 model as well. There will also be enhancements to the passenger seating, likely an increased amount of legroom and cargo room. A well appointed interior is a strong selling point for one of these so naturally it is important.

The F-Pace has a solid following and so these changes will make the next generation SUV an even more appealing option. Jaguar is going to be in an uphill battle to persuade buyers into the showrooms. The new and improved F-Pace could be the determining factor when it comes to that. With an onslaught of new luxury SUV offerings, every automaker has one, and the F-Pace will need to stand out from the crowd. Time will tell what other changes Jaguar will bring to the table but the 2021 F-Pace looks to be a winning combination of luxury and performance.