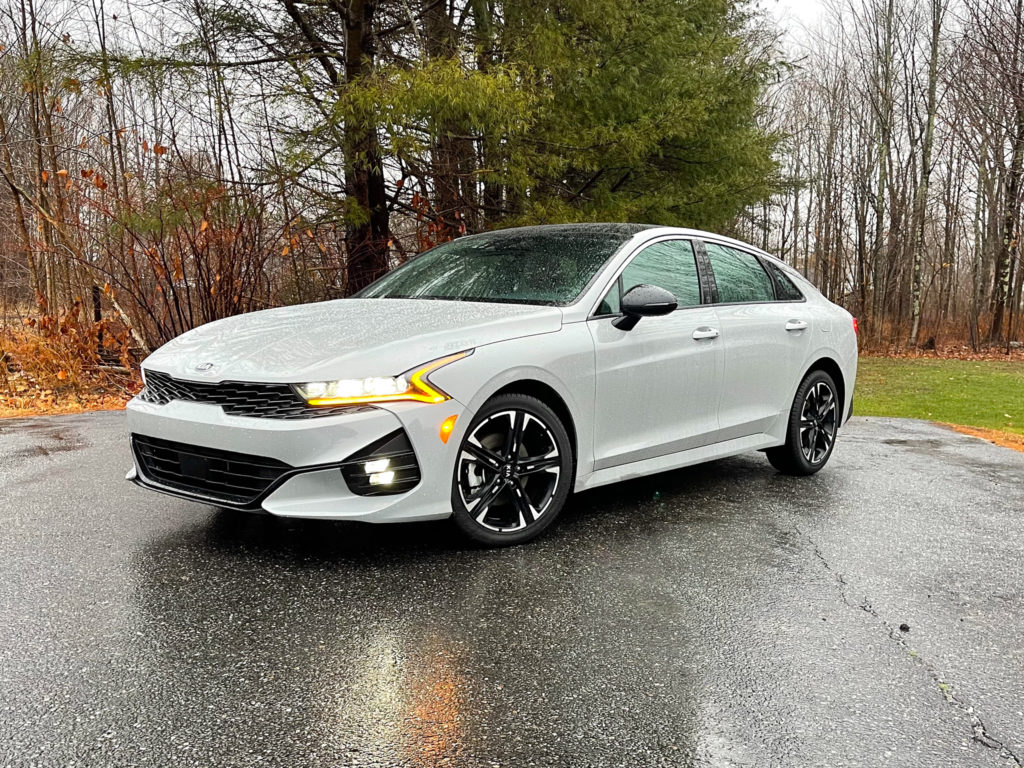 In a year that seems to have upended all normalcy, it’s refreshing to see an automaker forging ahead with releasing new models. Ford got the Bronco, Jeep is rolling out yet another variant of the Wrangler, and Kia recently released another solid sedan — the 2021 Kia K5.

This new car slots into the Kia lineup to replace the Optima, and what a replacement it is. The automaker is offering the 2021 Kia K5 with an aggressive design and sporty performance aspirations, all at a bargain price. With a few exceptions, the car is a solid package and a compelling buy in a dwindling segment of mid-size sedans that still sees some shockingly stiff competition from the Toyota Camry, Honda Accord, and Nissan Altima.

After spending a week in the K5 GT-Line, it’s hard to imagine that we live in a world with few to none great sedans leaving automotive factories, but that’s where we’re at today. Cars like the K5, which Kia labels as a “sporty” mid-sized sedan, are encouraging because the car is clearly not just slapped together from leftover parts. The 2021 Kia K5 is new, refreshing, and worth a look. Let’s get into why that is, and whether or not the Kia K5 might just be the sedan for you. 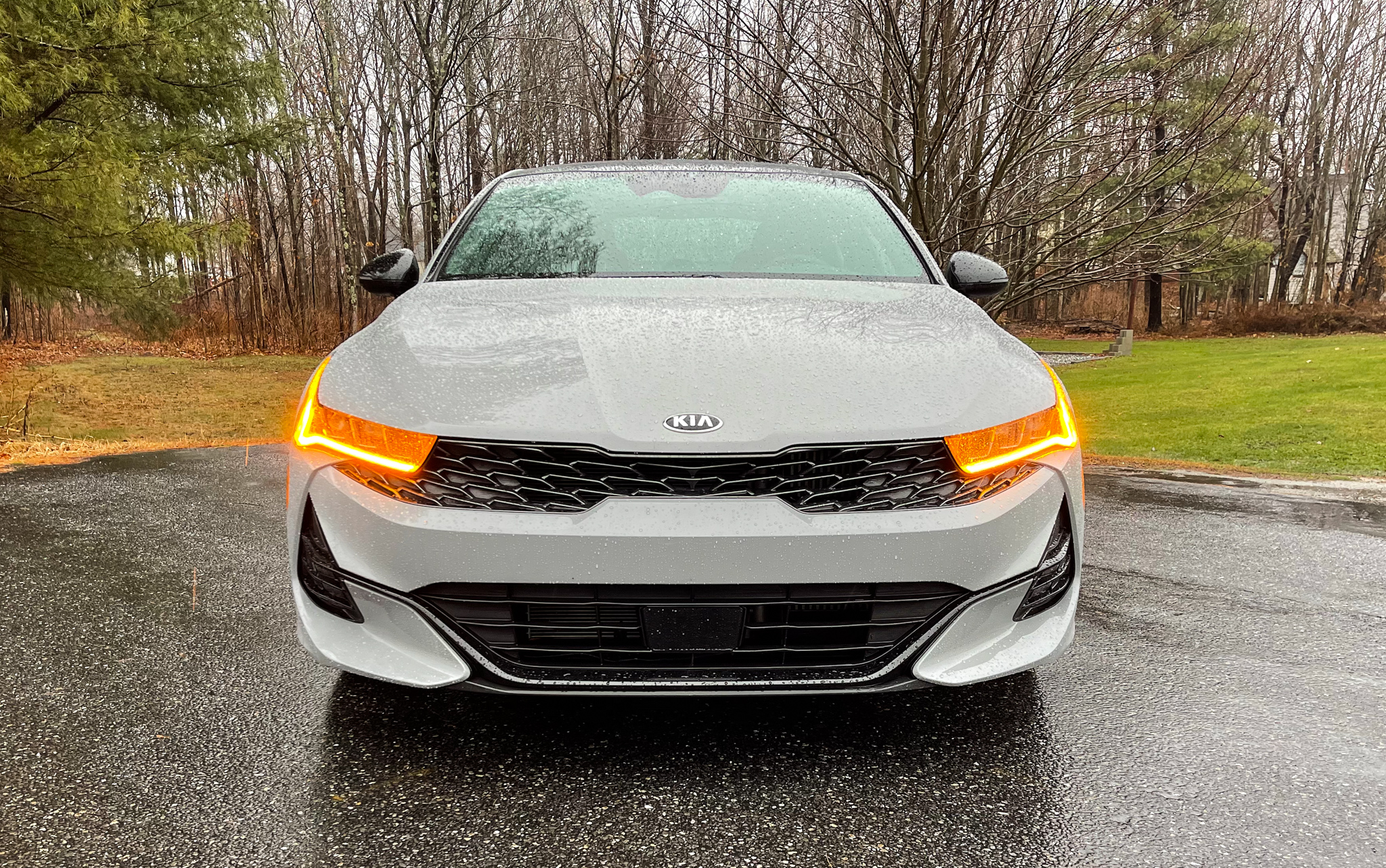 Before the year is out Kia will release a top-end GT trim for the K5, which comes with a turbocharged 2.5-liter engine with 290 hp. The current models still get a turbo, but the four-cylinder available for sale now isn’t as rowdy as the one we’ll see soon in the 2021 KIA K5 GT. There’s a distinction to be made between the GT-Line, seen here which we tested, and the GT model. The GT-Line is a mid-range sporty trim that is currently available. The GT trim is a more powerful range-topping model hitting dealer lots before the end of the year.

Even without the more powerful engine, driving the K5 GT-Line was a surprisingly engaging experience. The turbocharged 1.6-liter four-cylinder provides 180 hp and 195 lb.-ft. of torque for a good bit of grunt zipping around town. That’s coupled with a well-tuned suspension system and a chassis that can handle most normal driving situations with ease. The K5’s steering and braking were both predictable and confidence-inspiring, although the car isn’t as lively to drive as some of its competition, like the Mazda6.

Highway driving is an easy task for the K5, and a few long drives showed it was capable of remaining comfortable and quiet for the long haul. Scooting from 0-60 mph with the standard engine takes around 7-seconds. And passing once at highway speeds was a relatively stress-free affair.

Inside, the 2021 Kia K5 is just as composed and well thought through as on the outside, with a few notable exceptions. The GT-Line model I tested came with optional red leatherette seat trim which, in typical Kia fashion, felt more premium and upscale than the car’s price tag would suggest.

It was, however, missing heated seats and a heated steering wheel, both of which are nice additions to have in New England in the winter. Those features are optional, but the GT-Line that was tested cannot be upgraded with ventilated seats — not even with the $800 AWD Special Edition Package or the $1,600 GT-Line Premium Package. Of course, cooled seats are not critical to the functionality of the vehicle, but should be available in an options package, especially for the premium price tag. 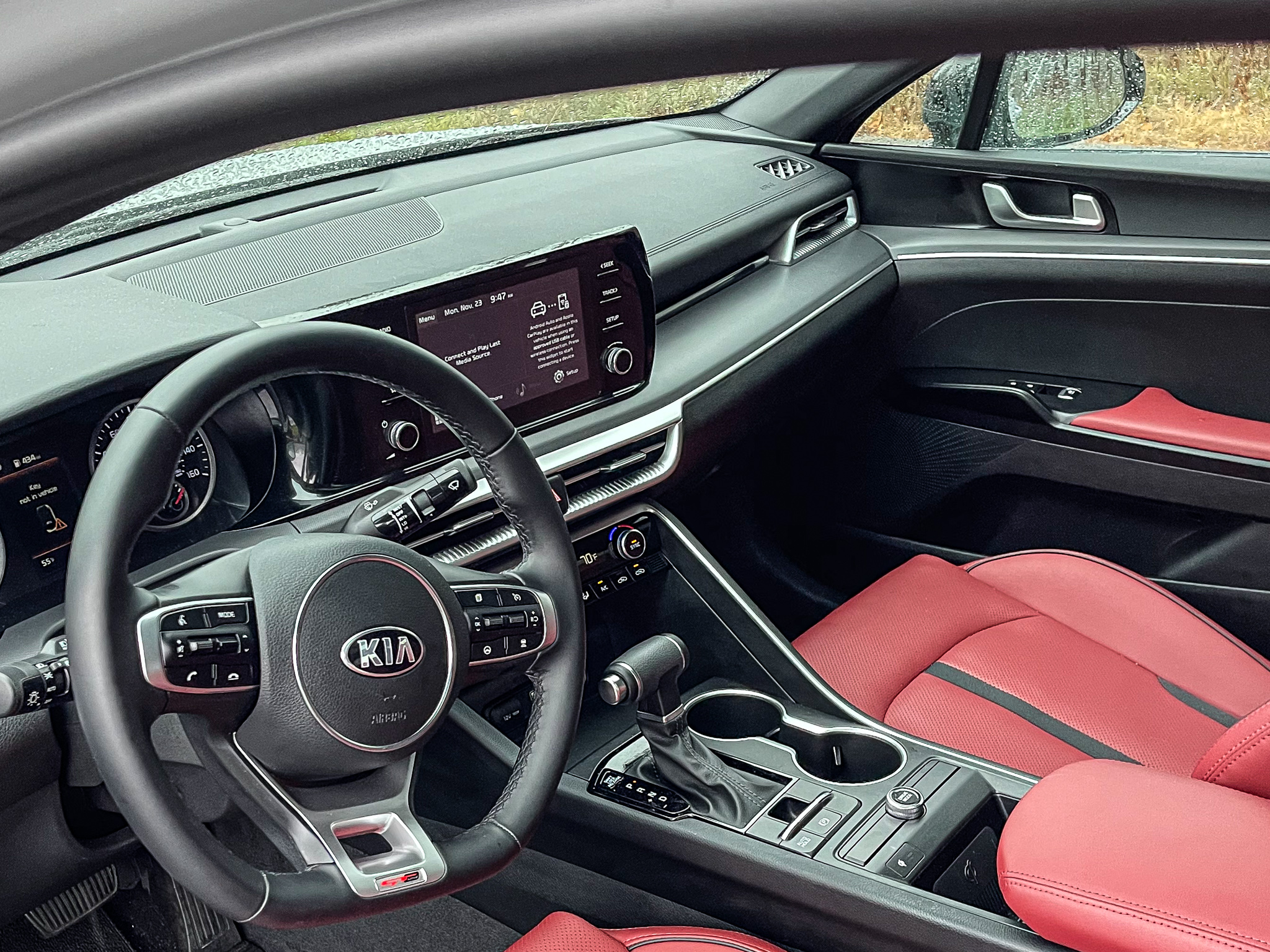 Despite its compact dimensions, the K5 feels spacious and uncluttered inside. Up front, the mix of upscale and budget materials leans decidedly in the upscale direction. The use of piano black — the glossy, sometimes cheap-feeling plastic material — is proportionate on the interior and doesn’t overwhelm the dash or center stack as it does in some other models. With the large touchscreen, the view from the driver’s seat truly feels cockpit-like. And every control, display, and button is placed within easy reach for front-seat passengers.

The back seat, on the other hand, is tight. There’s enough hip and legroom to accommodate most adults and child seats, but the K5’s sloping roof and elegant coupe shape cut into the rear headroom considerably. This issue is even more pronounced with the optional panoramic sunroof, although the resulting lighting effect will be worth the reduction in the headspace for many buyers.

Infotainment is an area where Kia has built its success on simplicity and functionality, and it shows in the K5. The menus are clear, colors are crisp, and the system is responsive without lag. The Special Edition Package adds a 10.25-inch touchscreen to the dash, along with navigation and wireless phone charging. 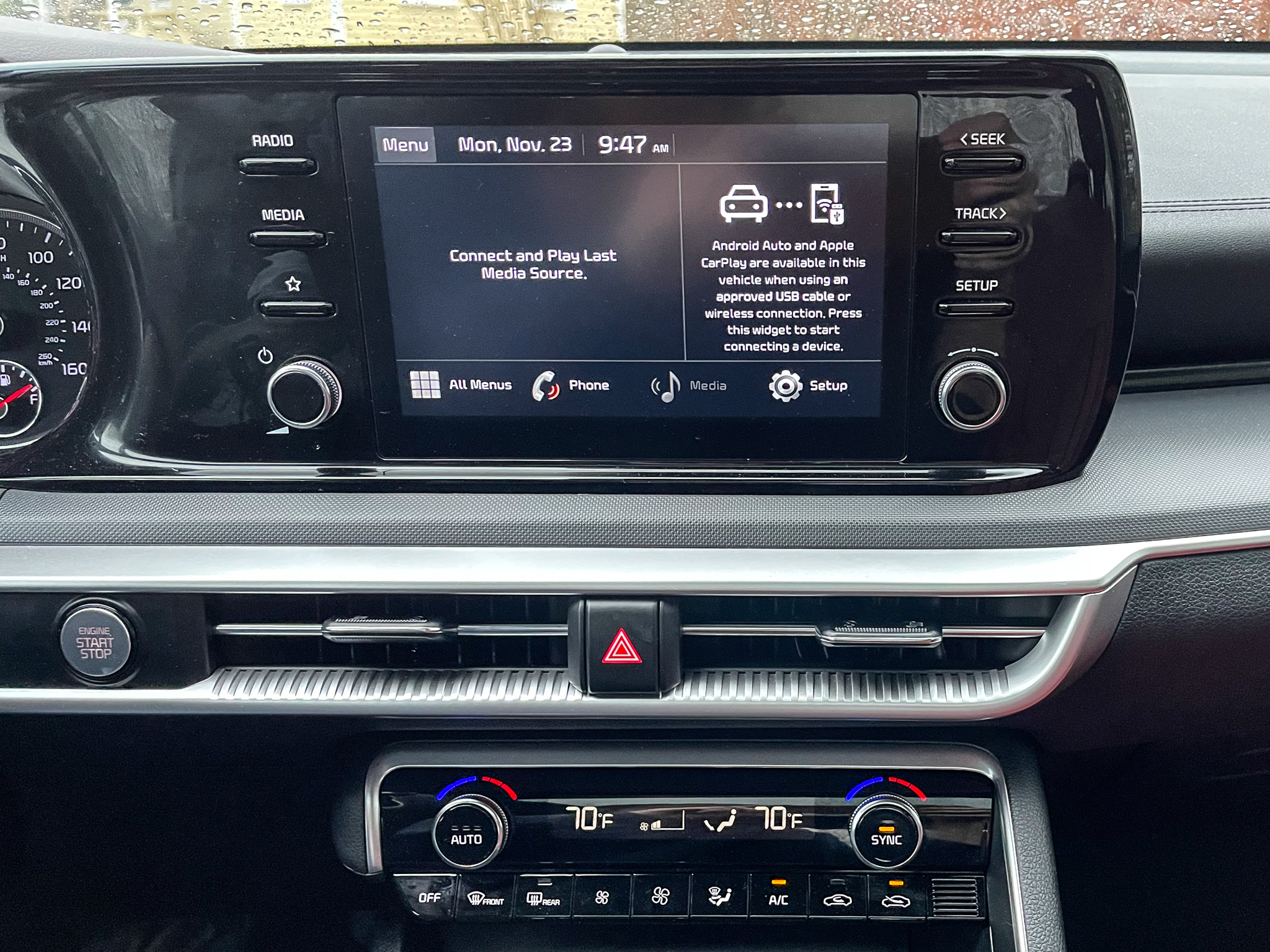 However, it does not get you SiriusXM satellite radio, nor does the K5 GT-Line have the ability for you to add it. This option doesn’t come until the EX Trim, which is frustrating considering that the base models of several other vehicles offer the technology.

Even without satellite radio, the GT-Line is solid from a technology standpoint. The standard audio system, though not the best in the world, is more than capable of delivering loud, clear sound, and the upgrade to the larger touchscreen is well worth the cost.

Kia K5: Value On A Budget

Getting around the few quirks with tech options and the lack of rear headroom, the K5 excels. The starting price of the currently available K5 lands at $24,455, after a $965 destination charge, is a strong value, especially when you consider the lengthy list of standard features. Even the forthcoming top-end GT model lands at $30,490 if you are looking to add a few noteworthy upgrades to the K5. 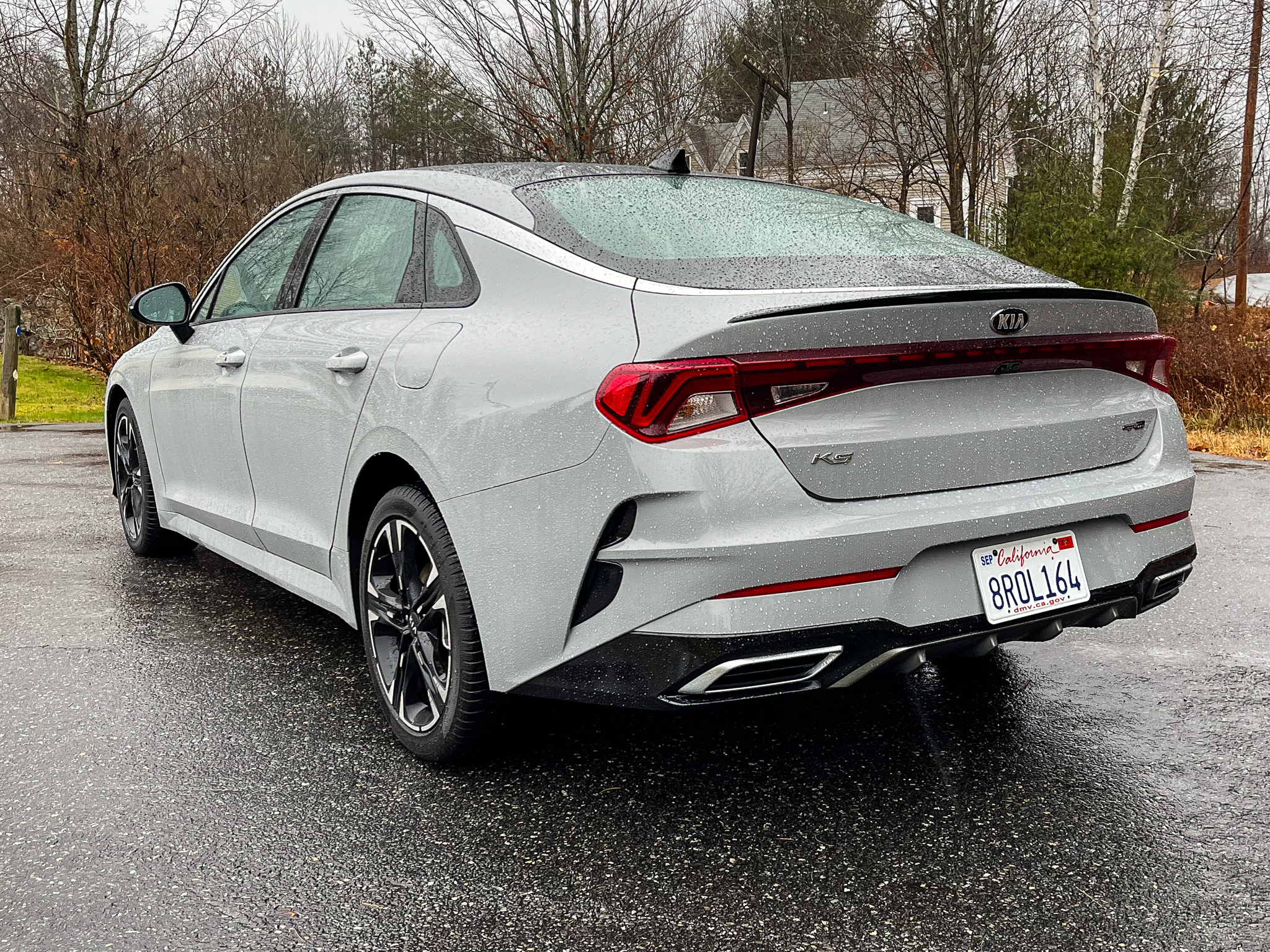 The 2021 K5 is a solid effort from Kia. Though it’s not quite as refined of a package as a Honda Accord or Toyota Camry, the K5’s price tag and feature set should be plenty to draw in buyers. The sedan might be a dying breed, but Kia’s investments and dedication to the segment has helped it churn out compelling vehicle after compelling vehicle. That’s alright with me, and after a drive in the K5, you’ll likely agree.
Build your own 2021 Kia K5 at Kia.com.