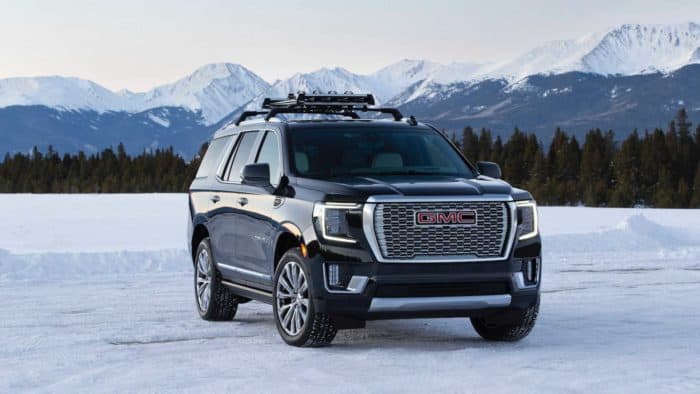 GMC is the commercial and consumer truck and SUV division. In the past decade, the brand has cemented itself as a sales leader thanks to strong consumer demand and exceptional product quality. As the consumer appetite for trucks and crossover SUV models continues to grow the GMC brand is positioned to experience exceptional growth. There are certain aspects of the GMC brand that you just can’t find with other automotive brands. The upmarket Denali trim package has graced the brand’s truck and SUV offerings since the 1999 model year. GMC has put into motion aa sweeping redesign of the Sierra full-size pickup truck for the 2019 model year. While being well received the rest of the lineup is also due for a redesign. 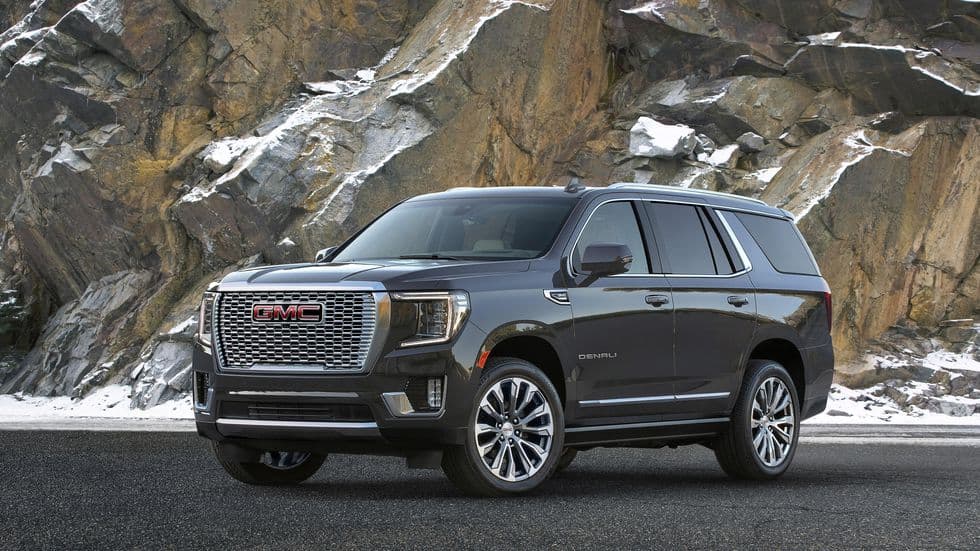 Aside from the Sierra the Yukon SUV is also slated for a full-on redesign for the 2021 model year. Early spy photos have shown a much more refined looking SUV. The corporate cousin which is the Chevrolet Tahoe was unveiled earlier this year and featured a completely refined exterior and interior. GM is looking to differentiate the two large SUV models from each other more than ever. The Yukon has been a sales leader for GM and with new competition from Ford hitting the market there is no doubt that the new Yukon will need to be competitive. 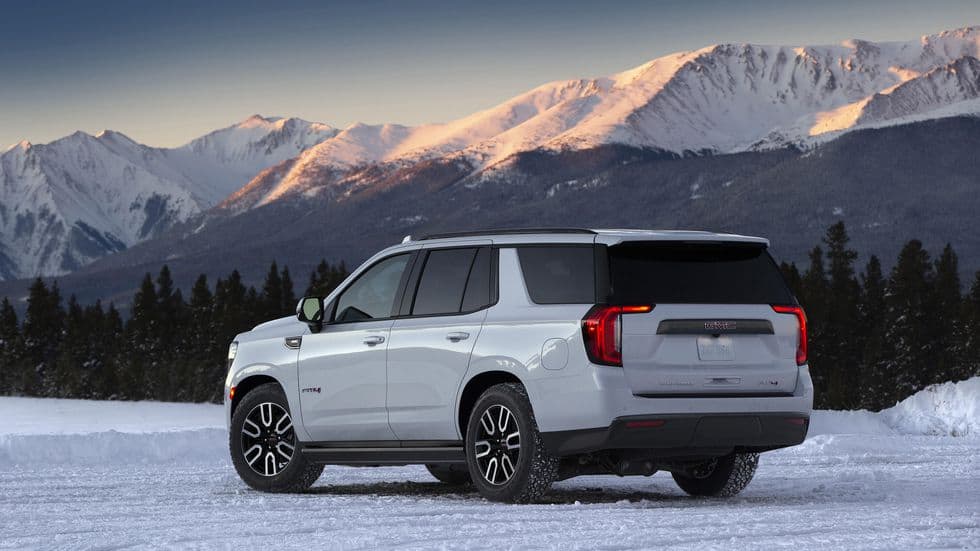 In addition to the 2021 Yukon redesign, the Canyon midsize pickup truck is also slated to get a refresh as well. The truck which has been sweeping sales away from the Toyota Tacoma and Nissan Frontier is going to debut a refreshed exterior and interior. The Canyon has been a solid offering for consumers who need a pickup truck but don’t require a full-size pickup truck. The redesign of the Canyon is sure to bolster GMC sales and offer another midsize pickup truck option on the market. There will also be a Denali trim offered on the revised Canyon as well which is sure to hit a sweet spot with buyers. 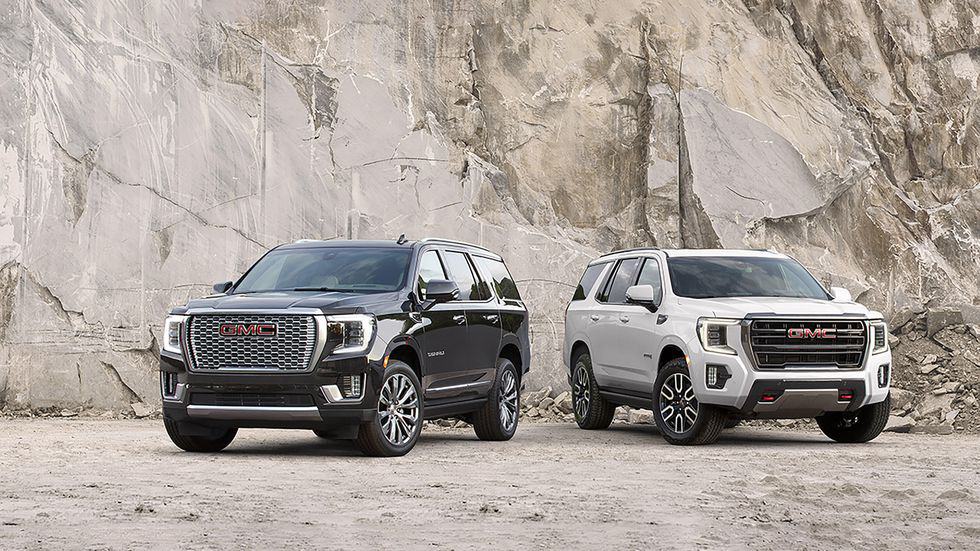 When the GMC Canyon and its corporate twin the Chevrolet Colorado were reintroduced to the market for 2015 the trio was well received. The complete redesign was a major improvement over the predecessor, which was dated and under-powered. The revised Canyon has been a substantial success for GM so it is only right that the company refreshes the truck for its sophomore year on the market. When you think of a GMC Canyon you think of a rugged truck that can either blaze a trail or go to the grocery store. GM understands this so there have been a plethora of new features added for the 2021 model year. 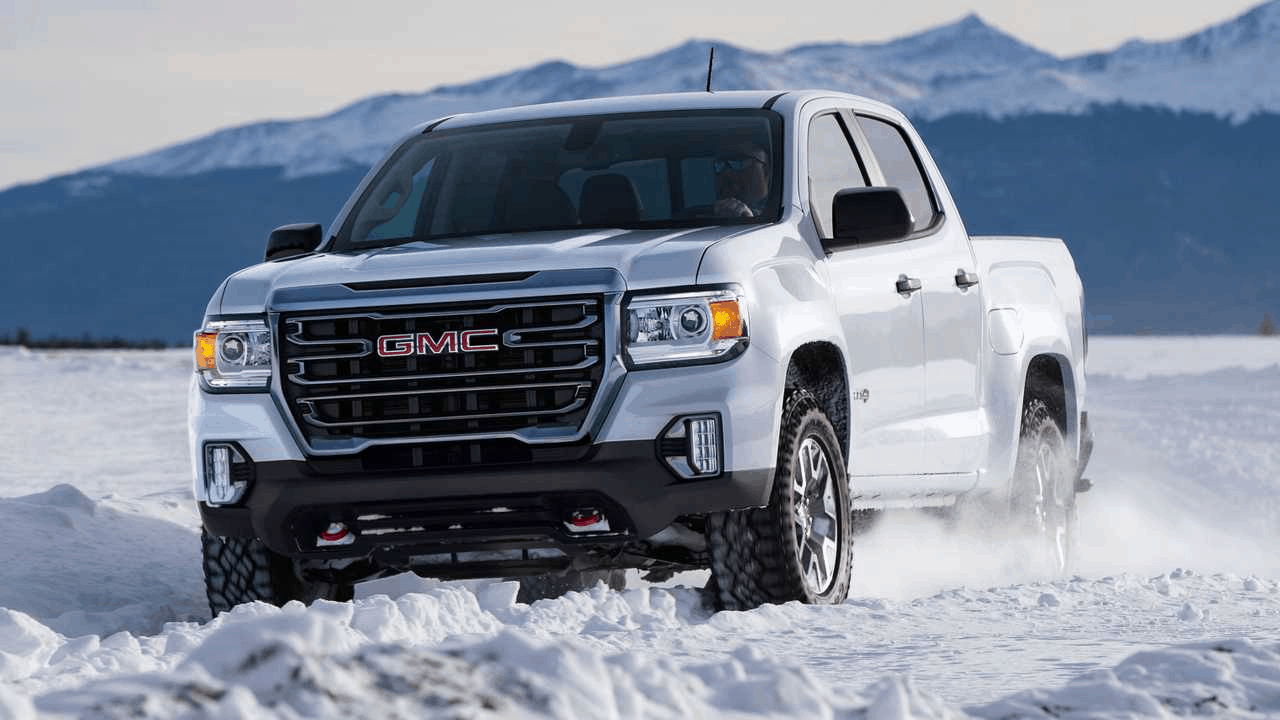 From an exterior standpoint, the front grille has been redesigned to be more in line with the larger Sierra. The six-sided design will replace the oval grill that has been on the truck since it’s debut in 2015. Aside from that, there are subtle changes to the Canyons exterior for the 2021 model year. Many of the lines along the sheet metal have been smoothed, along with a more aggressive-looking pair of alloy rims for the Elevation model. The Canyon has always been a relatively good looking truck, and the new styling changes only solidify that. 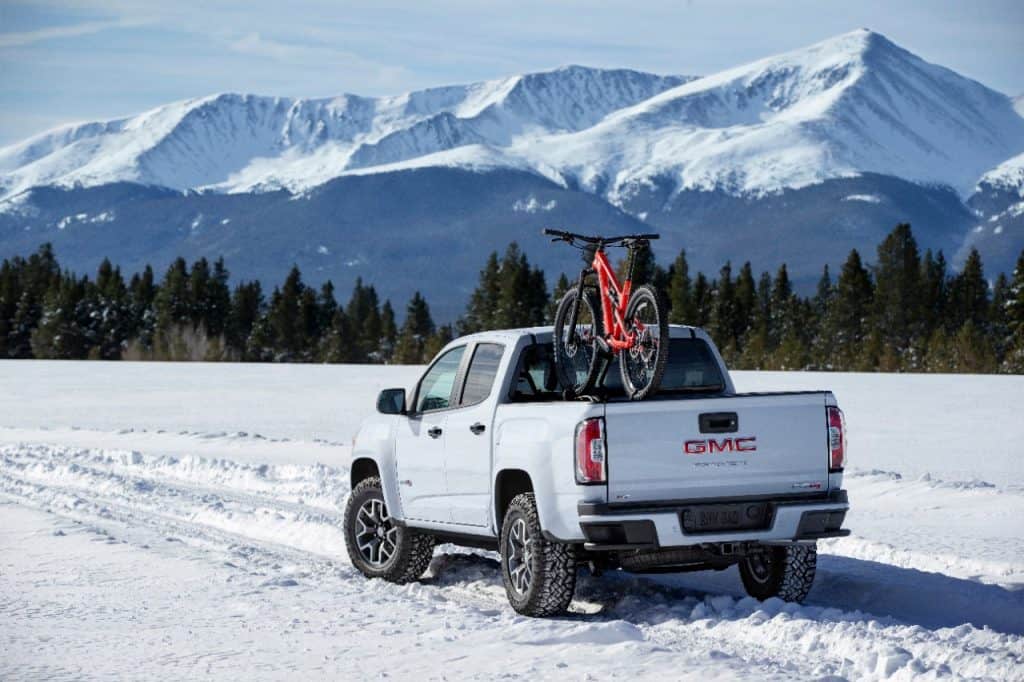 The All-Terrain model will be going away for the 2021 model yeah in favor of the AT4 trim. This trim package has already been seen on the Sierra 1500 and the Acadia SUV. Subtle enhancements have also been done to streamline the exterior styling. The AT4 package has a pair of unique 17-inch that are wrapped in 31-inch all-terrain tires. 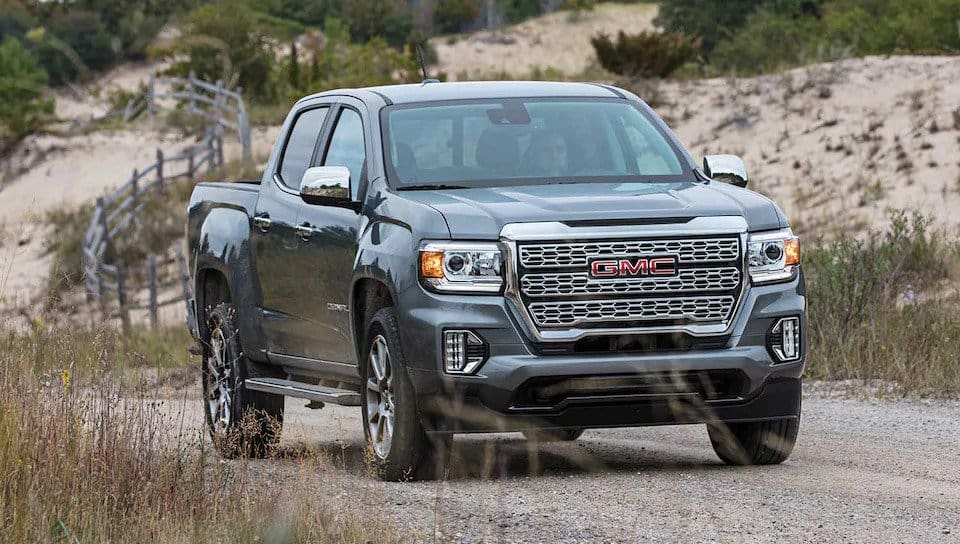 The package is very similar to other offerings such as the TRD-Pro and the Pro-4X on the Toyota Tacoma and the Nissan Frontier. In addition to the styling changes, there is also the addition of hill descent control, an electronic locking rear differential, and a skid plate for the transfer case. The Canyon AT4 is also going to come with a bright red set of hooks on the front of the truck. 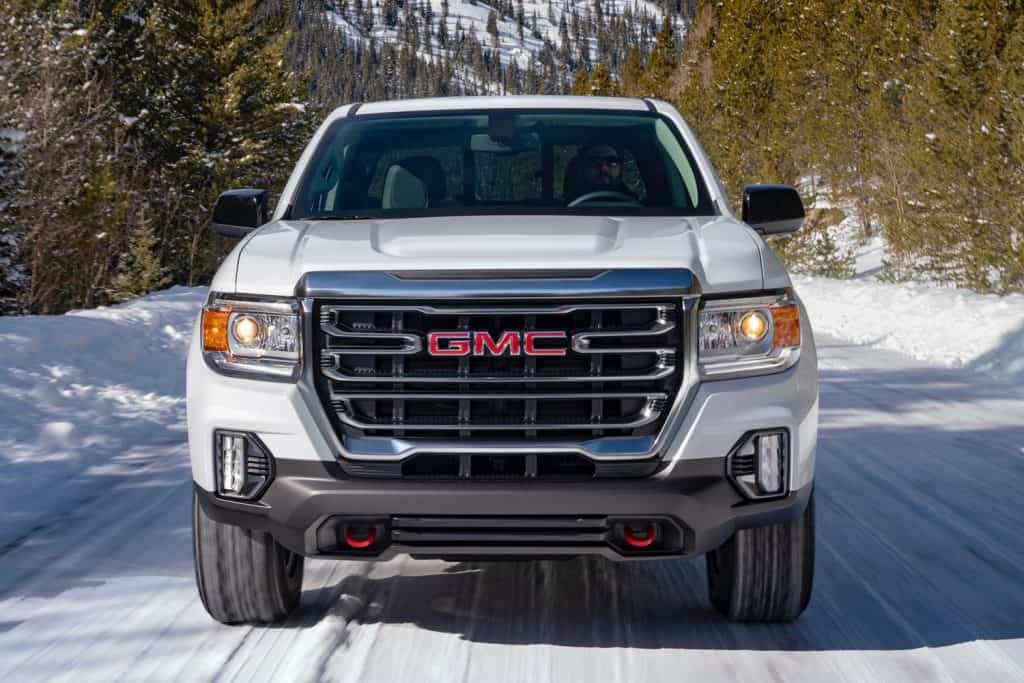 The 308 hp 3.6-liter V6 is a carryover from the previous Canyon, and this is the standard engine on both models. What’s optional is the Canyon’s 2.8-liter turbodiesel four-cylinder engine. This is one of the first turbodiesel engines that has been offered in a domestic midsize truck. Power and low-end torque are going to be enhanced thanks to the diesel powerplant. Which gives the Canyon a suitable option for buyers who want diesel power without having to opt for a heavy-duty full-size truck. 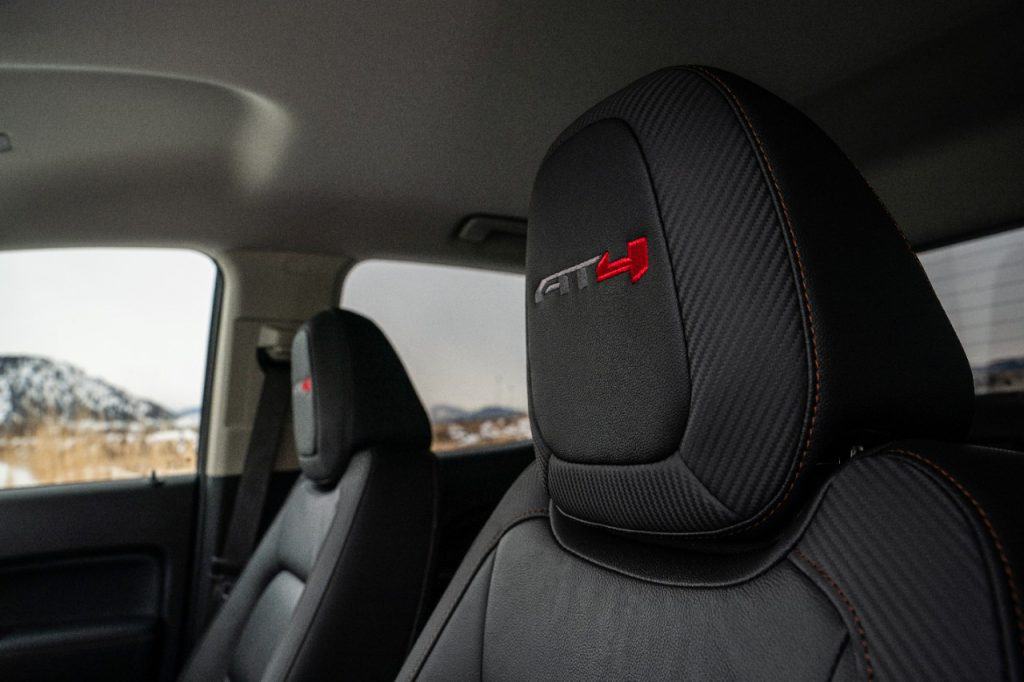 The interior is also a carryover from the previous truck. GM has focused on cleaning up the exterior and bringing it more in line with the rest of the GMC lineup. The top of the line Denali trim comes with ventilated front seating, in addition to a revised infotainment center. Small interior features such as the wireless charging pad help to keep the Canyon ahead of the technological curve.

The next generation of the GMC Yukon is going to be introducing a plethora of new features in addition to revised exterior styling. If the recently released 2021 Chevrolet Tahoe was any inclination into the direction that GM is taking, the Yukon reaffirms things. With the Denali brand accounting for almost 60% of GMC sales the popular nameplate has been revamped to be even more exclusive. 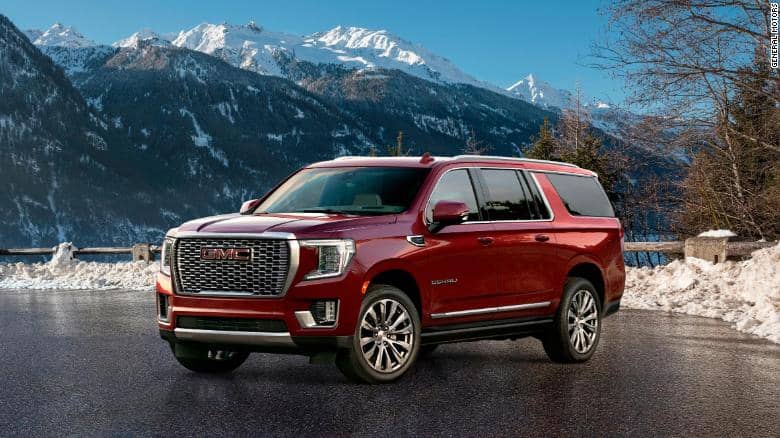 For the first time in twenty years, the Denali brand is going to be getting some exclusive features. This has been a long time coming as the Yukon Denali SUV has constantly been overshadowed by its corporate cousin the Cadillac Escalade. To completely change the image of the Yukon GM had to take things even more upmarket. Take one look at the new 2021 GMC Yukon and you’ll understand what we mean. 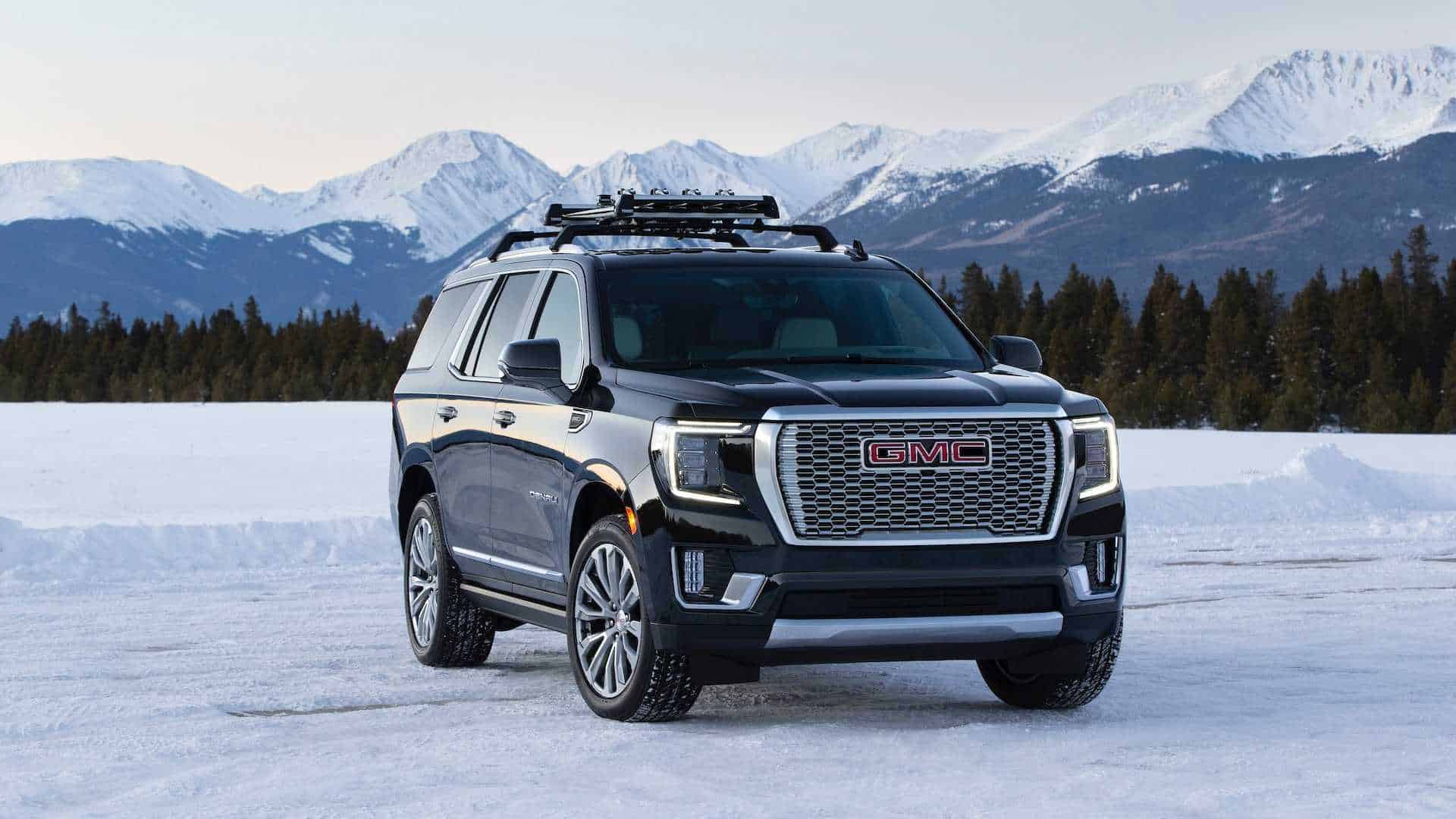 The SUV has been designed from top to bottom with an emphasis on comfort. GMC is pushing two variations of the Yukon, the Denali, and the revised AT4. The Denali has been around in one form or another since the 1999 model year. The 2021 Yukon Denali takes things to a whole new level with areas of refinement that a GMC hasn’t seen. 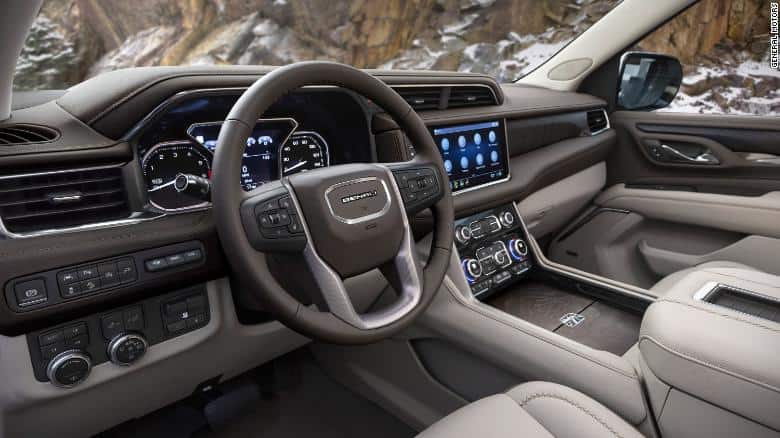 The interior of the large SUV has been completely revised from top to bottom. As with any move upmarket, the materials have been upgraded as well and the Yukon will have exclusive interior design. The hand-stitched leather seating is just one of the new features. Drivers will be wrapped in heated and cooled front bucket seats. The interior has a much larger infotainment center screen and the Yukon has such features as lane departure warnings and a backup camera. But this is not just some SUV that you’ll see in rental car fleets.

The GMC Yukon Denali has been designed from the ground up to encapsulate the driver in comfort and convenience. The 10-inch diagonal center infotainment center is standard equipment for the revised Yukon and Yukon XL. Moving up to the Denali or the AT4 model will net buyers an optional 15-inch head-up, or windshield display. Rear passengers haven’t been forgotten on the new Yukon either. A 12.6-inch-diagonal touchscreen for the rear seats is an option. The Yukon and Yukon XL have long been staples of the limousine industry and this kind of feature is sure to make the big SUV a hit with fleet customers. 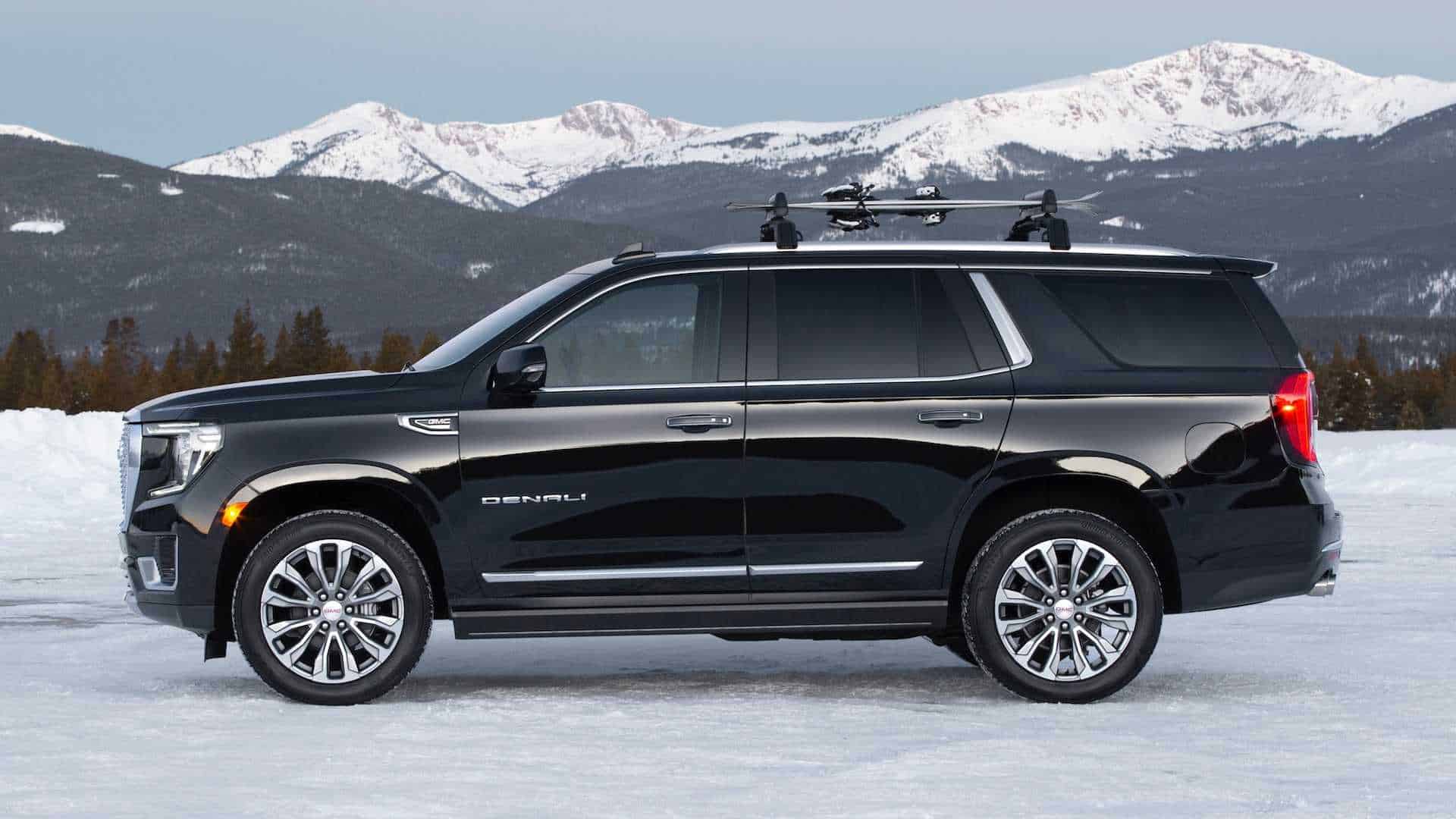 There are three engine options for the Yukon this time around. The 5.3-liter V-8 with 355 horsepower is the standard choice. Optional is the 6.2-liter V-8 with 420 hp and a new 3.0-liter diesel engine. The diesel engine offers 277 hp and 460 lb-ft of torque. If it looks familiar that’s because this is the engine that debuted on the Sierra and Silverado earlier this year. The Yukon is among one of the first full-size SUV models to get a diesel engine option. No matter what engine you choose the only transmission choice is going to be a 10-speed transmission. 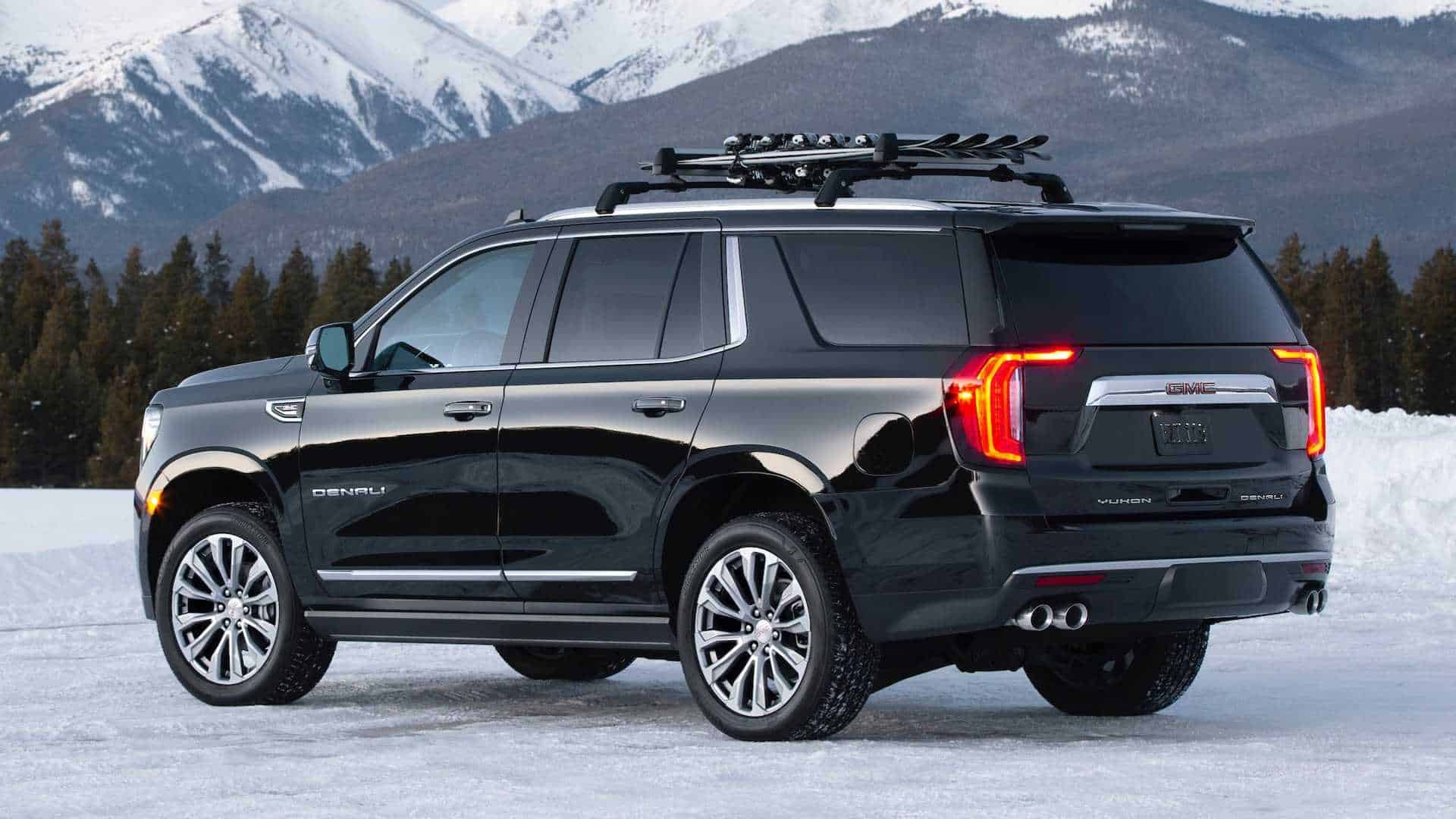 The revised Yukon AT4 is among the newest varients in the GMC lineup to get the popular off-road trim package. The goal for the brand going into the 2021 model year is that every vehicle in the lineup is going to offer an AT4 off-road package. For the Yukon and Yukon XL, this involves a higher ground clearance and a pair of off-road wheels and tires that are fitting of the AT4 trim package. There are also options such as a roof-rack that you can add to the Yukon AT4 which give it that off-road feeling. 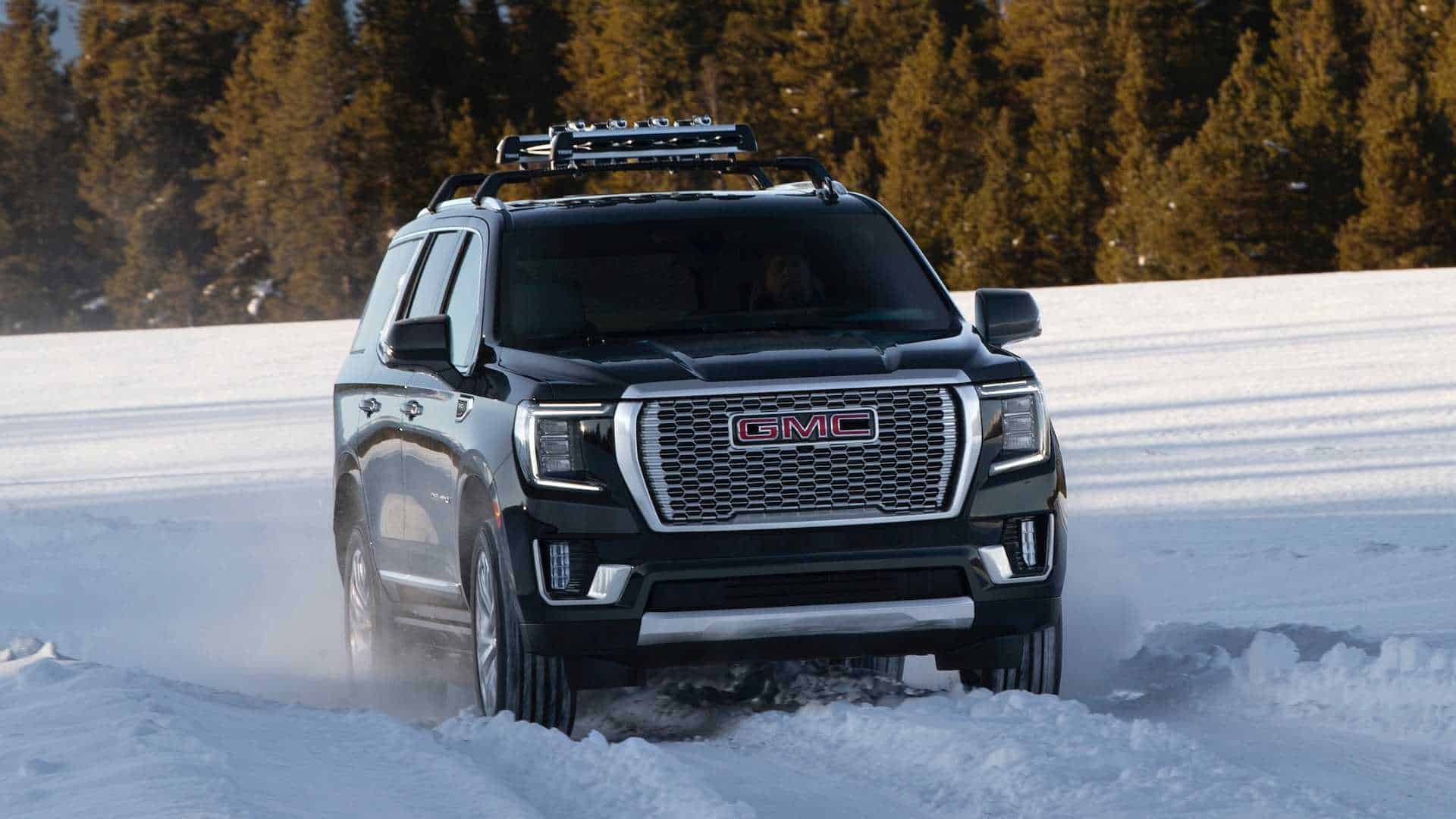 The Yukon and Yukon XL have come a long way in the past few decades. GM is forging into the future with a pair of attractive full-size SUVs. With the Denali line moving more upmarket and the AT4 giving buyers a dedicated off-road platform the Yukon is turning out to be an attractive buy. It will be interesting to see what the future holds for the 2021 Yukon as we discover more developments.

GMC’s small SUV offering the Terrain has been a strong seller for the company since its debut in 2009. But as with most crossover SUV models, the vehicle has been lackluster when it comes to performing off-road. Well, GMC has changed that and the Terrain will be benefiting from the popular AT4 package. The AT4 trim package originally debuted on the Sierra pickup truck and is offered as a way for consumers to get an off-road offering. Similar to what the Z71 used to be the AT4 package offers some serious goodies. 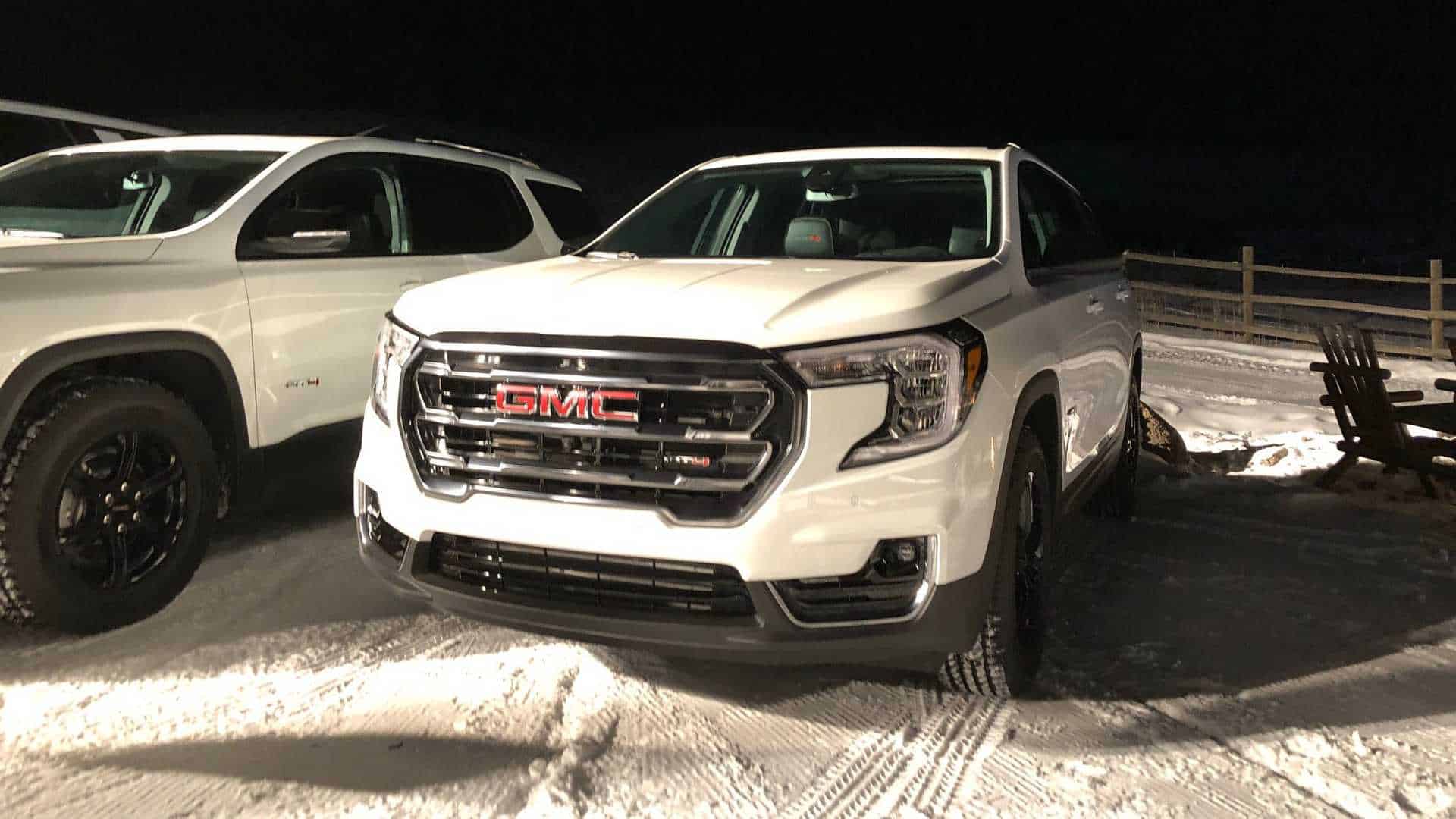 For the Terrain, this involves a completely redesigned exterior that has a pair of matching off-road wheels. From what little details were revealed about the AT4 thus far the prototype model that was shown at the media event in Vail, Colorado had some standout features. The new body cladding along the sides and the wheel wells give the Terrain a much tougher off-road look. The blacked-out grille and badging let you know that this Terrain is an AT4 edition. Much of the rest of the SUV still looks the same for now. 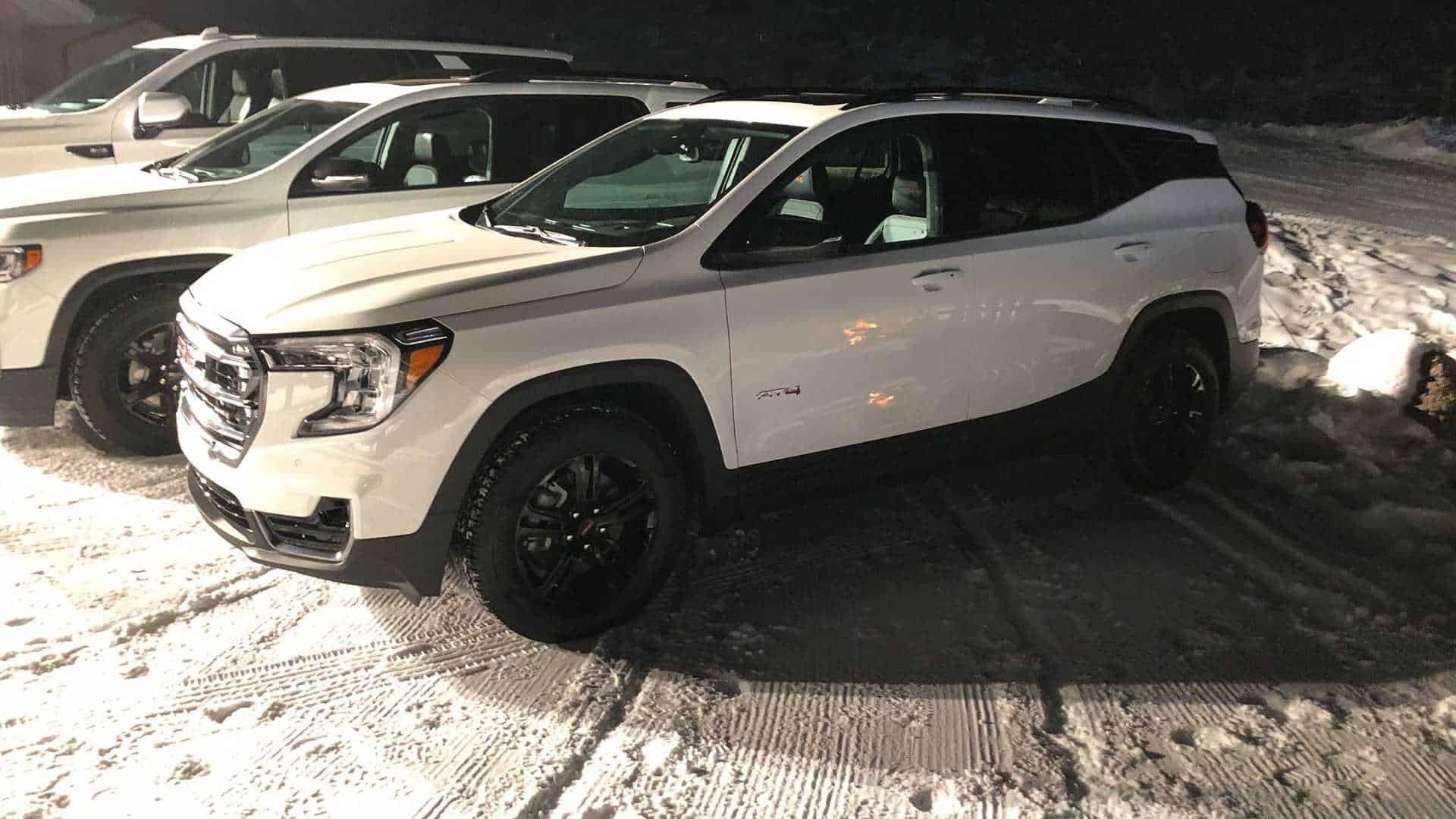 We can only assume that the interior is going to get subtle upgrades similar to the rest of the AT4 lineup. A leather-trimmed interior is sure to be a must with the AT4 trim, and there are small details such as chrome trim. GM has no revealed if the AT4 edition will get a larger infotainment center. But the new batch of GM SUV models has been dubbed the “most technologically advanced data processing” vehicles on the road. 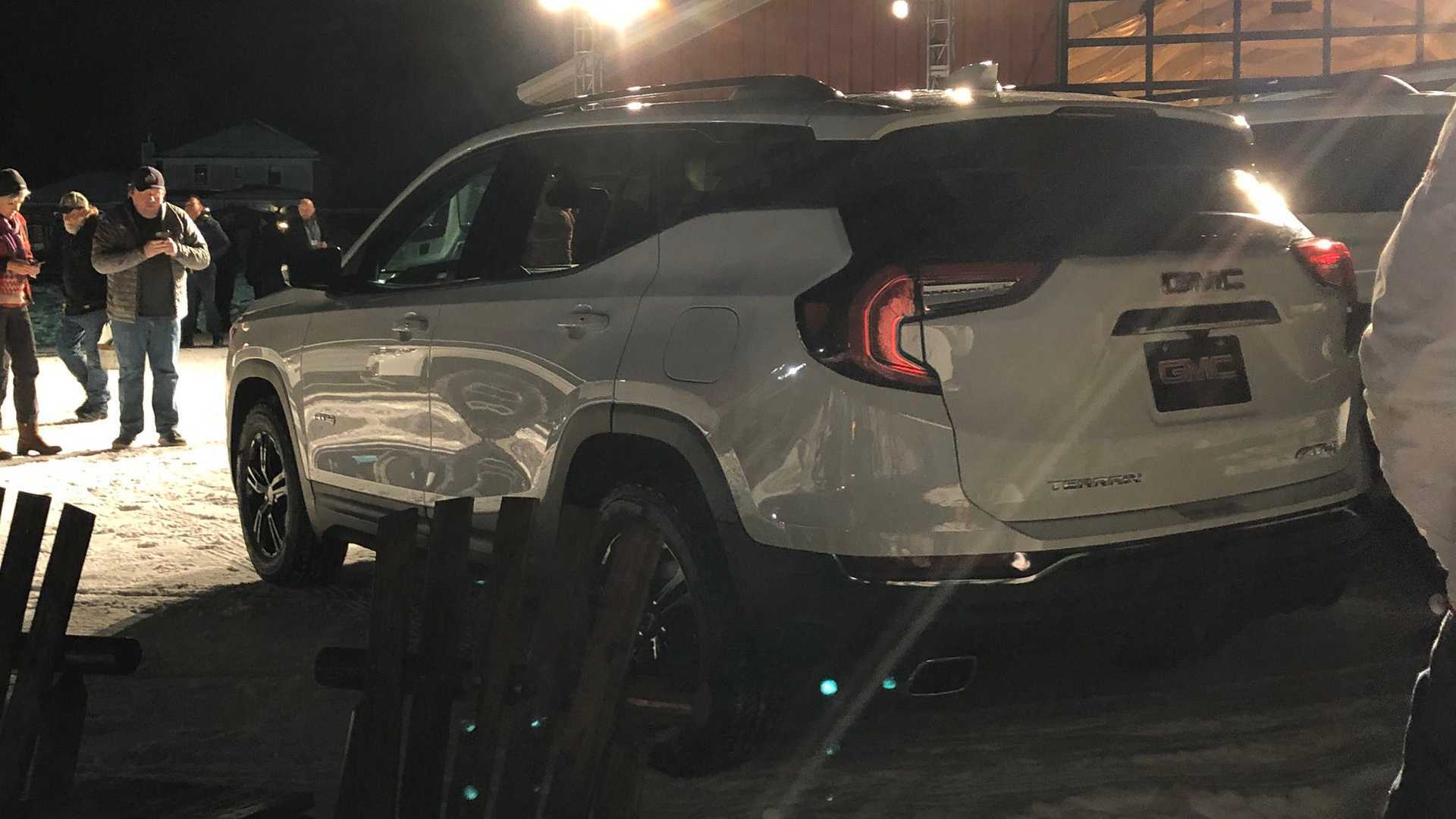 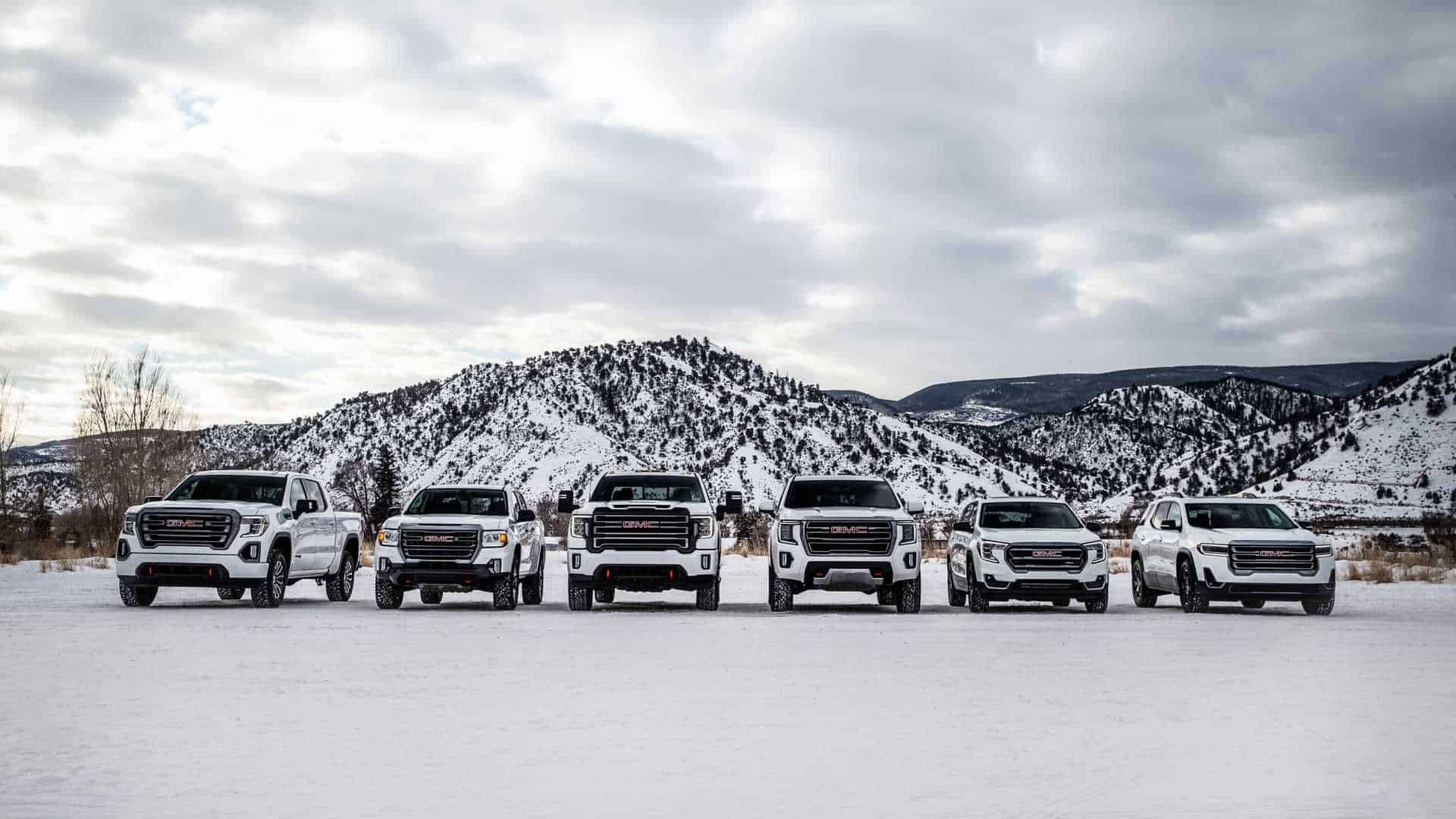 The Terrain has kept up an appearance of being trendy and offering a plethora of tech items. It will be interesting to see how GM is going to build on the AT4 lineup with the Terrain. The mid-size SUV has never really been a solid performer off-road. Details are still scarce at the moment, but if the preview of the Terrain AT4 is any inclination we should be in for a surprise.

The full lineup of GMC vehicles will offer an AT4 package. Which means that the brand should have more credibility off-road. With SUV models making up the majority of profit margins for automakers. The GMC brand has remained a staple in GM’s portfolio for great selling vehicles. It will be interesting to see what the rest of 2021 holds for the notable GM truck brand.


Supecars: Bugatti Chiron vs. Koenigsegg Regera
Top 15 Fastest Subaru Cars Ever Made
One-Off Cruise For A Cause "Hope Edition" Shelby GT500SE To ...
A Cool $5.7-Million Will Buy You The DB5 Vantage Icons Colle...
Top 10 Movie Car Stunts of All Times
The Best 2020 Cars Nissan Has to Offer