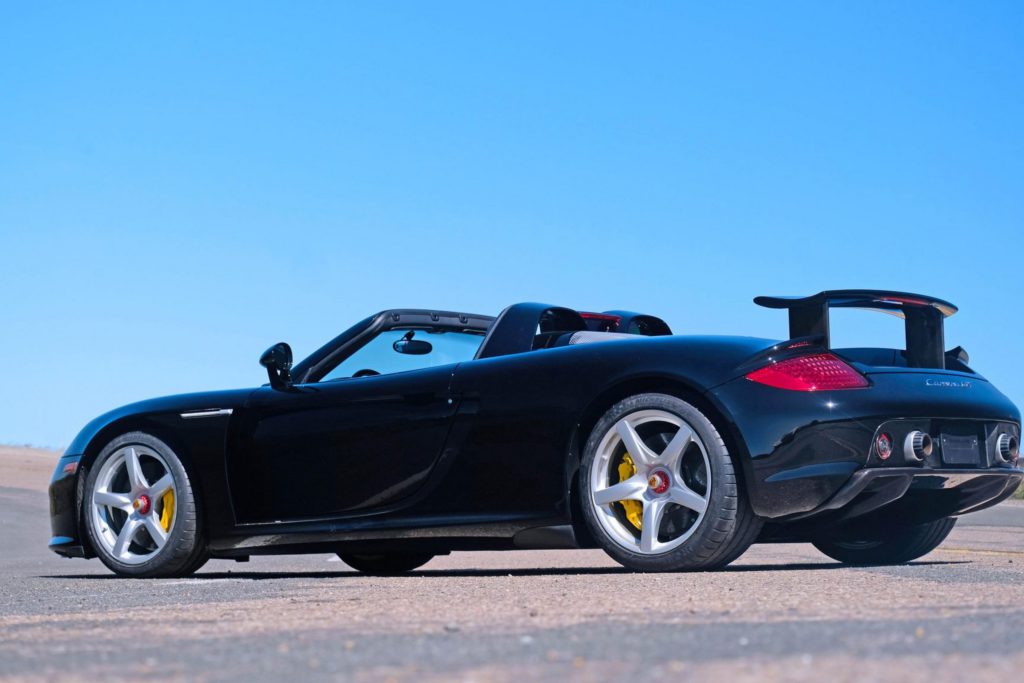 What’s the deal with this 2004 Porsche Carrera GT that could become the most expensive Carrera GT ever sold? The high bid is not a big show about nothing; this Carrera GT belonged to legendary comic Jerry Seinfeld, residing in his collection for six years.

Porsche built just 1,270 examples of the Carrera GT during the car’s 4-year run. Since then, its  LeMans racer-inspired 5.7L V10 engine has become a legend with its 603 hp and 435 lb.-ft. of torque mounted behind the driver. The cars have also become notorious for a tricky clutch attached to the 6-speed stick. Nonetheless, they’re renowned for their looks and driving experience.

With tiny production numbers and big demand, the Porsche Carrera GT commands big bucks today. A 2005 car with just 250 miles on the odometer is the current high price watermark of the model, trading hands for $2 million earlier this year. Though Seinfeld’s Carrera GT is not a low-mile example, as it has 3,700 on the clock, it could potentially bring even more because of its provenance. 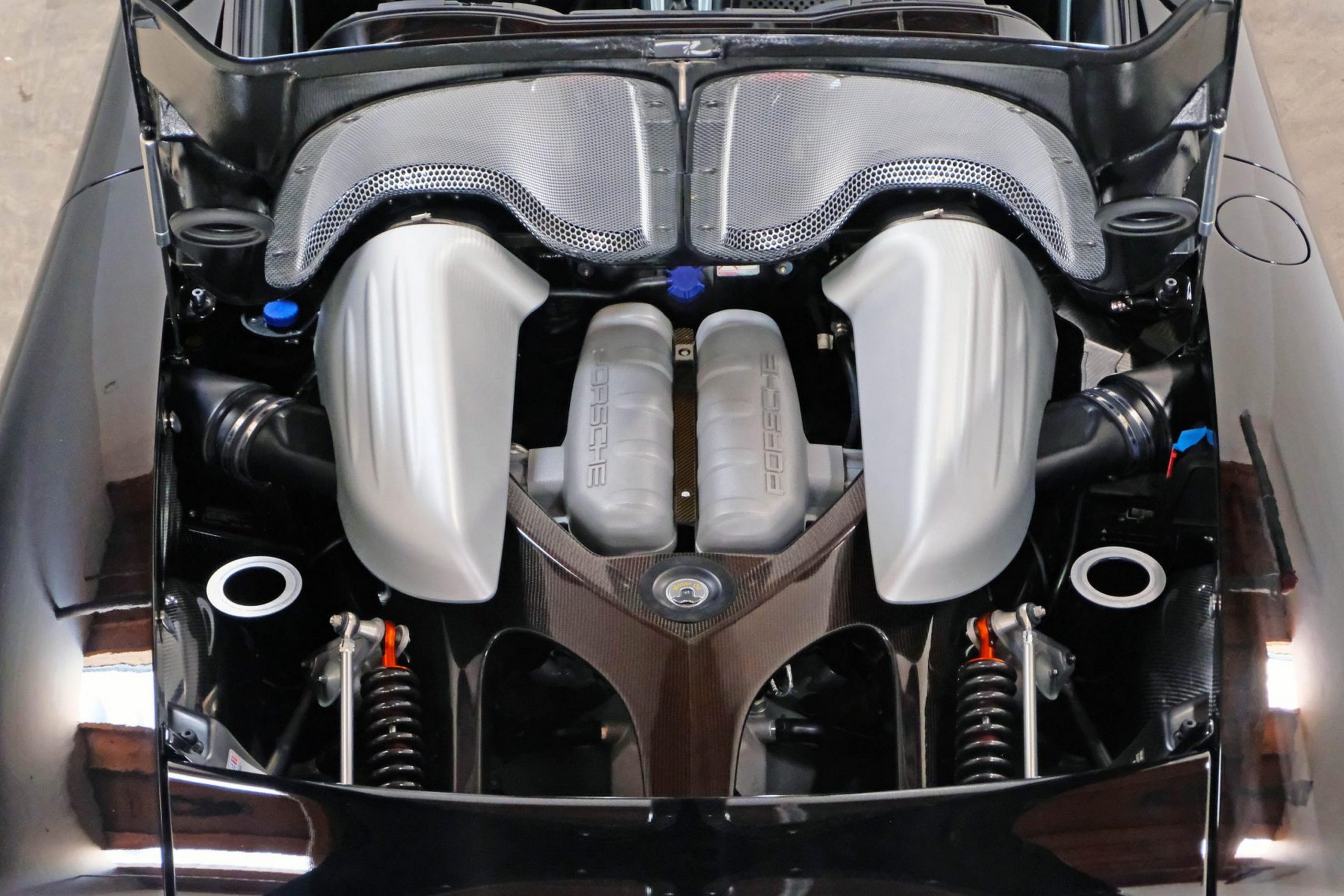 The comic bought the Carrera GT in 2005 and kept it until 2011. Unfortunately, that means you won’t get to meet him to exchange keys. However, you will get a copy of the New York title with his name on it.

AutoWise can confirm that Jerry Seinfeld the actor and comedian owned the car — not Gerry Seinfeld, the periodontist. The current seller hasn’t mentioned any smelly car problems either, but, as always, buyer beware.

You’ll find the car on the online auction site Bring-a-Trailer, currently being sold through a dealer in San Diego, California. The car sports black paint with dark gray leather upholstery, for a subdued look by Carrera GT standards.

Imagine This Ride in Manhattan 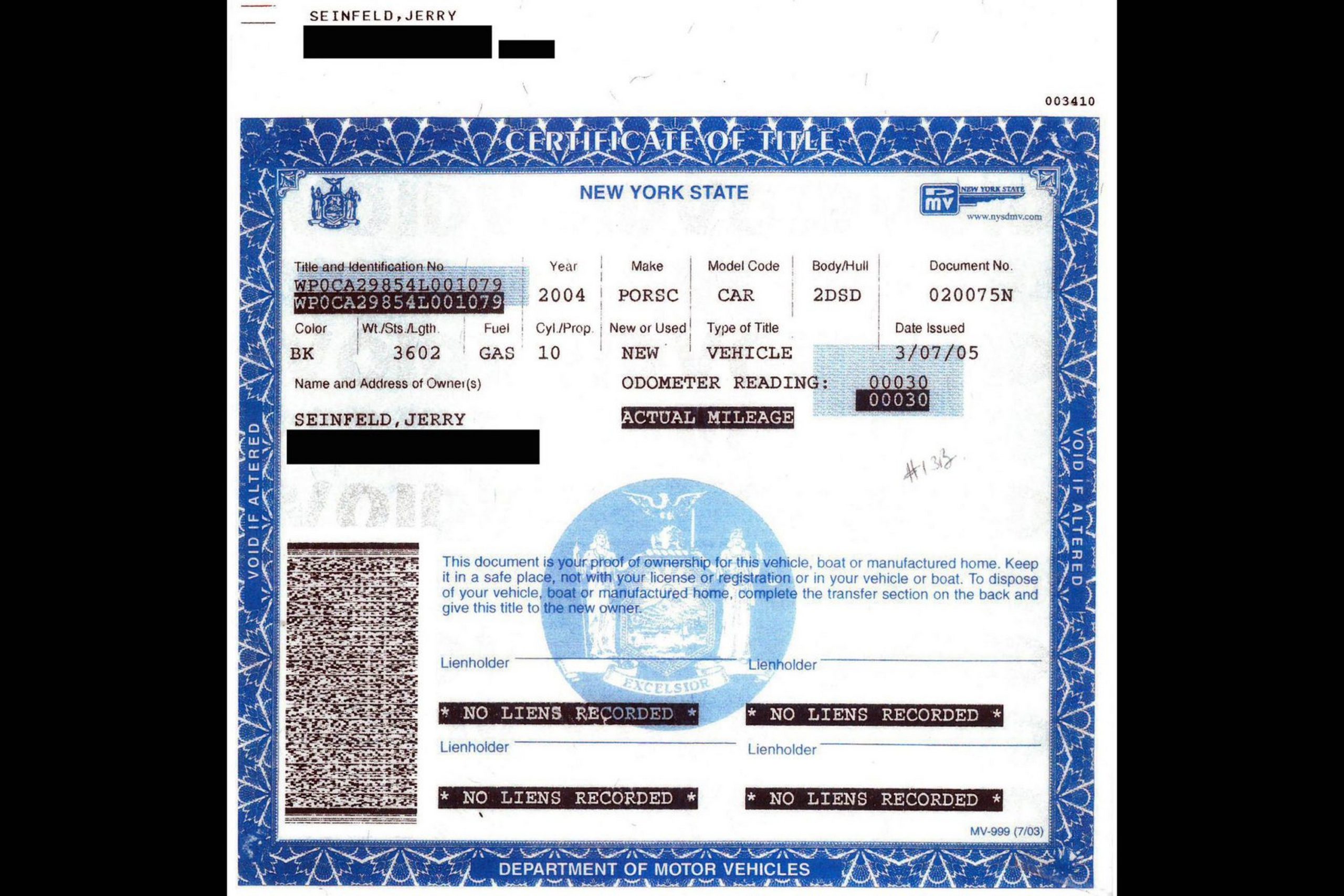 The auction includes the original window sticker from South Shore Porsche in Freeport, NY. According to the listing, Seinfeld then bought it from Manhattan Motorcars in early 2005. The Carrera GT offered few options, but this example does come with the standard removable roof panels, a CD player, racing seats, and yadda yadda yadda.

As a US-spec car, this one gets XT seats, which are slightly wider than the car’s European-spec racing seats. The XT’s trade a bit of hold-you-in-place for the extra room stateside buyers sometimes need.

A carbon-fiber monocoque chassis helped keep the Porsche Carrera GT’s weight to just over 3,000 lbs, making it one of the highest-performance vehicles available when it was sold new.

In Seinfeld’s Own Words 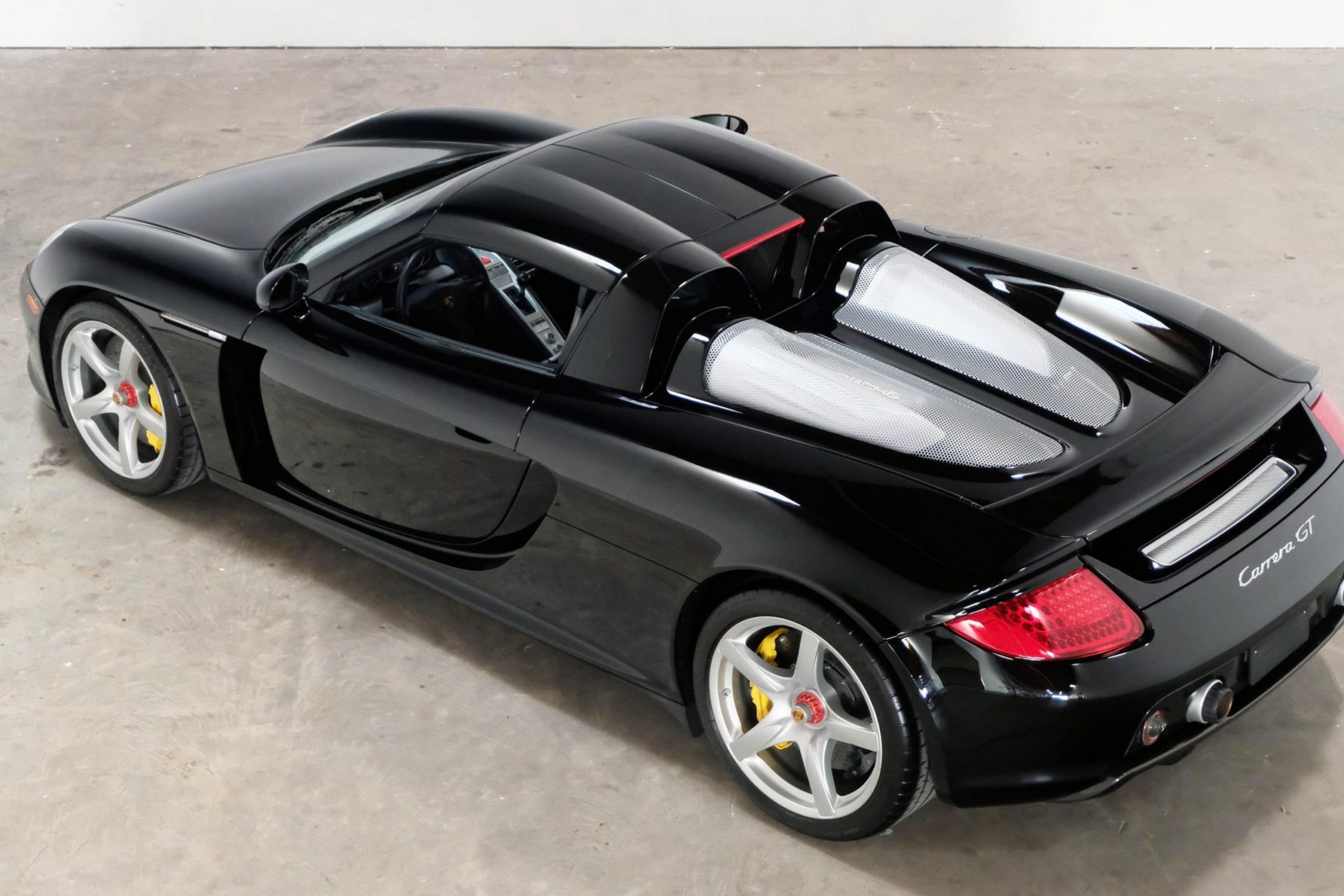 Seinfeld wrote about the car (the Porsche Carrera GT, not this specific example) when it was new, saying in Automobile Magazine that “I even stood up and gave an impromptu congratulatory speech to the Porsche executives at lunch on the last day, to thank them for their wonderful hospitality and tell them they have successfully built the single greatest sports car in the history of the world to date. I know I’m only a comedian, but screw it, they have. I don’t care what anyone says. All the other superexotic fantasy whatevers, melt them back down; these bloody buggers have cracked it. I’m chuffed, I tell you.” 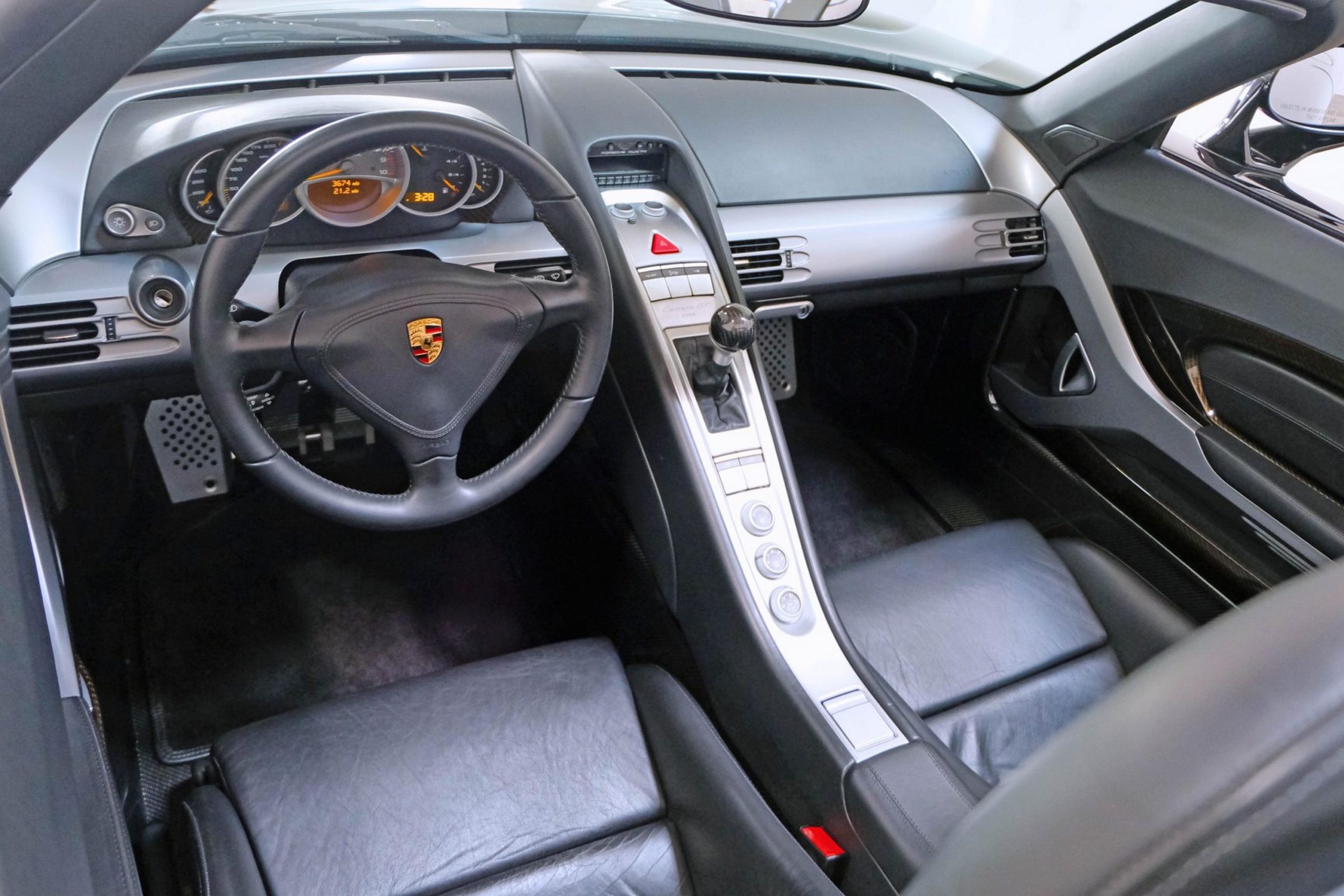 If you’re thinking about bidding, this Porsche Carrera GT has also gotten a recent engine-out service to replace the rear main seal and clutch release. It will come with a full set of fitted luggage from Porsche and a cover to keep the dust off.

As of this writing, the leading bid on Bring a Trailer was up to $1.7 million. The auction is set to conclude Friday, March 11. With nine days left in the auction, Seinfeld’s Porsche Carrera GT could end up being the most expensive example ever sold. The new buyer might not be a comedian, but they sure will look good in this car while getting coffee.