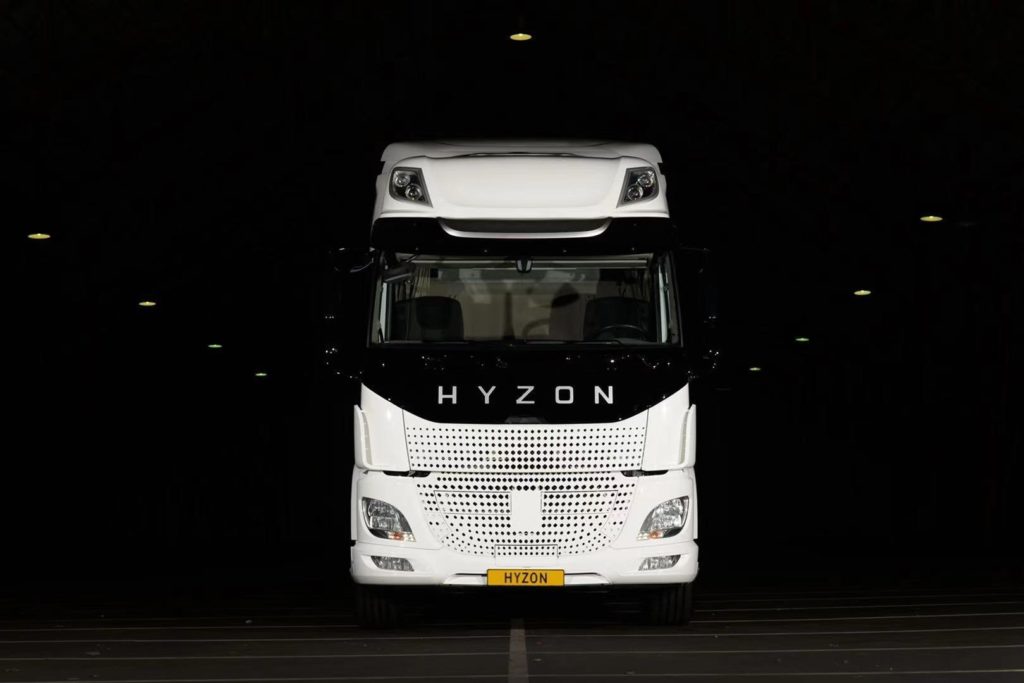 Hyzon CEO Craig Knight had this to say about the company’s entre to the stock market:

“This exciting step marks the starting line for Hyzon Motors. Our public listing will foster greater awareness that the future of commercial transportation — hydrogen fuel cell-powered vehicles — is today’s reality. It’s the beginning of a new chapter in the history of Hyzon, as we accelerate the transition to hydrogen commercial transport worldwide, and advance our commitment to reducing carbon emissions in a sector that is one of the largest contributors to climate change.”

The company defines itself as “a leading supplier of zero-emission hydrogen fuel cell powered heavy vehicles” and “a pure-play hydrogen mobility company with an exclusive focus on hydrogen in the commercial vehicle market.” Although the commercial fleet specialist is not quite a household name, it sounds like it’s about to be. Think H2-powered Peterbilts. A press release from October of last year stated that the company is expected to churn out 40,000 road-ready fuel-cell commercial vehicles annually by 2025.

Hyzon is a relatively recent offshoot from 17-year hydrogen fuel Singaporean juggernaut Horizon Fuel Cell Technologies. The spinoff took root in US soil in 2020 when it established its HQ and operations at an old GM fuel cell facility in New York. Around the same time, Hyzon established European operations in the Dutch city of Groningen. 2021 saw the H2 technologist expand its stateside operations to Detroit and just outside of Chicago. In all, Hyzon houses operations in the States, Australia, China, the Netherlands, and Singapore.

In March of this year, Hyzon began construction on its Chicago-adjacent site, a location it claims will be the United States’ largest fuel cell membrane electrode assembly (MEA) production facility. In layman’s terms, the site will churn out proprietary hardware used in Hyzon’s commercial vehicle-made hydrogen fuel cells.

Automotive fuel cells draw upon hydrogen and oxygen molecules to produce electricity. That electricity is then siphoned to the vehicle’s electric motor and/or battery. The hydrogen fuel cell’s reliance upon two naturally renewing energy sources (H2 and O2) makes continual powering of hydrogen vehicles easier, range of travel longer than seen with gas or plug-in vehicles, operation silent, and results in zero emissions. The only waste product is water vapor.

The heads at Hyzon seem keen to develop partnerships in all possible realms — fleet innovations, infrastructure projects, and customers in a range of industries. In recent months, the company has wrangled several headlining mobility contracts with companies in the agriculture, energy, mining, and waste management industries.

And in April of this year, the company announced the formation of the Hyzon Zero Carbon Alliance, described as “a new collaboration of leading companies in various industries that are committed to advancing the deployment of hydrogen mobility worldwide and helping the environment.” Initial Alliance allies included Ark Energy, AXA, Bank of America, Hiringa Energy, Modern Group, experimental urban project NEOM, Raven SR, ReCarbon, and Total.

It claims, “[b]y aligning the supply and demand side of the sector, the Alliance is designed to overcome some of the biggest hurdles faced by the hydrogen industry to date, making zero-emission fleet operations a reality in the very near term.”