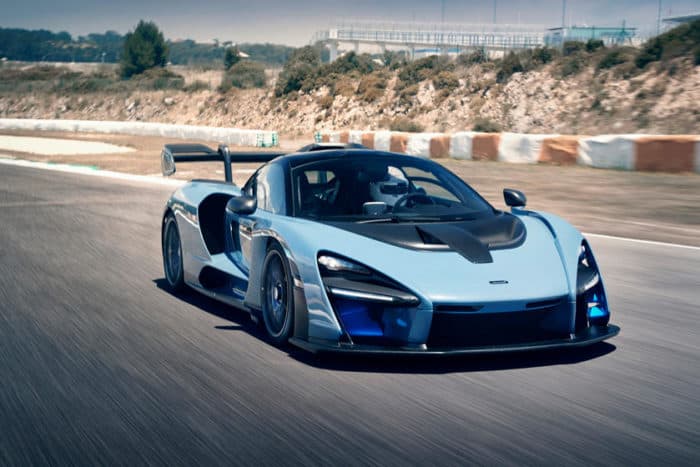 It’s one thing to be a car guy and love the vehicles and engineering which goes into making then, and yet another to seek out tracks and see how fast a lap you can make. The latter is what this list is all about as we’ll focus on the best track cars money can buy today.

These machines are built for one purpose and one purpose only: speeding around the track to dominate the competition. Or in some cases, create new racing series to battle each other with the best driver winning. Track day cars manage to make the whole experience of cutting corners at high speeds look somewhat simple, although we know that’s not the case.

Considering it’s essential to ensure that the track-focused car is as light as possible, automakers usually strip them of everything that can draw the driver’s attention while, at the same time, makes the car feel like it’s just come out of McDonald’s with two super sized meals in its belly.

It comes as no surprise then that these cars are not about the ultimate luxurious driving experience, but practicality that can and will shed seconds of your lap time on track. However, with recent model upgrades and adaptions, there have been many improvements in driver comfort so modern-day race cars are definitely not as spartan as their predecessors were only 10 or 20 years ago – not to mention older ones.

Some of the following choices are exotics with a royal pedigree that will eat corners for breakfast and still be at their best at a gala dinner, while others are relatively unknown (outside of racing circles) upstarts – often odd-looking – with only one goal: to put every other car around them to shame. In no particular order, here they are.

The luxury German manufacturer will sell you the hardcore track-only 911 GT3 RS for around $190,000, but do you really need one if there’s a much cheaper and similarly fast non-RS version. The Porsche 911 GT3 starts from around $145,000 which leaves you with plenty of spare money for optional upgrades or a brand new large SUV to tow it to track days if that’s how you roll. The best thing is: the GT3 can always take itself there as it’s equally capable both on and off the track.

Rated at 500 horsepower, the “regular” GT3 boasts only 20 hp less than the RS version and maxes out at 198 mph (the RS stops at 193 mph). Both use the same naturally aspirated 4.0L flat-six engine. Although it’s slower to accelerate (0 to 60 time of 3.4 seconds compared to flat 3 seconds of the RS), The 911 GT3 is definitely more fun and relaxed. Moreover, it comes with a choice between the standard PDK dual-clutch or an enthusiast’s choice of a 6-speed manual which the RS version doesn’t get. 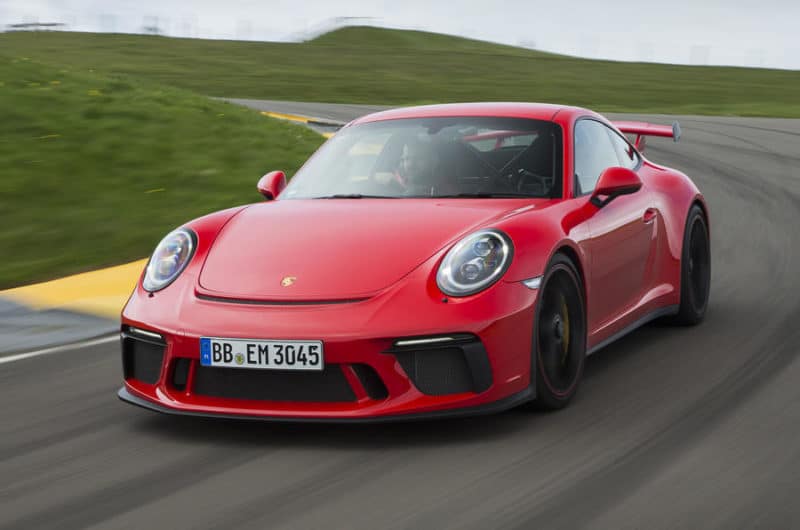 Weighing only 1,450 pounds, the lightning-quick Ariel Atom is the first of numerous odd-looking dedicated racers you’ll see on this list. In production since 2000, the base Ariel Atom 4 can be obtained for around $75,000. The more powerful (and competent) Atom 3S costs around $96,000, while the most powerful Atom 3RS modes warrant the hefty sticker of $120,000.

The Atom’s had plethora of different engines stuck in it over the years but the current fourth-generation models usually rely on Honda’s 321-horsepower 2.0L turbocharged K20C1 i-VTEC 4-cylinder. The 3S and 3RS models rely on an older 2.4L turbocharged K24Z7 i-VTEC mill which delivers either 365 or 425 ponies respectively. They all accelerate from 0 to 60 mph in less than 3 seconds.

Ariel Atom’s open-cockpit concept and lightweight tube-frame construction haven’t been changed since its inception, however. It was one of the first such performance cars of note and it’s still going strong. 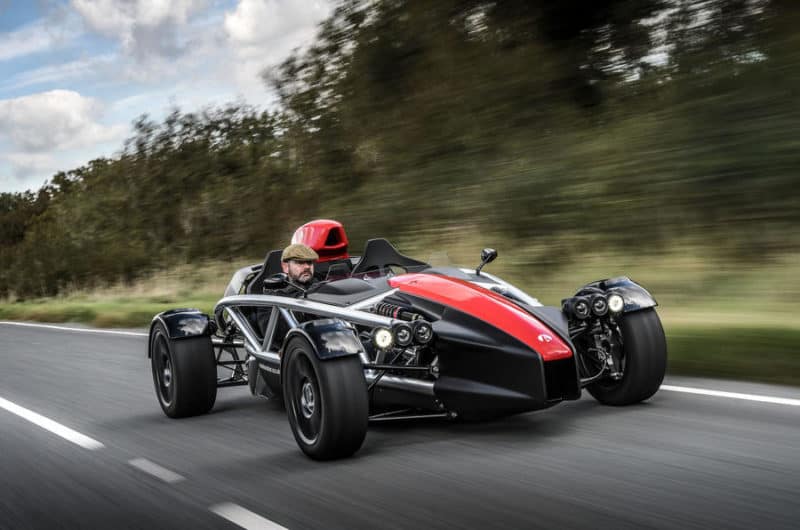 One of the latest models from McLaren ticks all the boxes when it comes to track racing. It’s named after the Formula 1 legend Ayrton Senna and it’s safe to say that the legendary three-time world champion (with McLaren) would have been proud of it. As far as new cars go, this is one of the best at track.

The supercar is light (3,000 pounds) and nimble, as it works its way towards the top speed of 211 mph. The Senna accelerates to 60 from a standstill in under 3 seconds and sports the latest active aero components. Its 4.0L twin-turbo V8 engine is good enough for 789 horsepower. Only 500 models have been made and, as you might have expected, all have already been spoken for which might pose a problem for you if you actually have $850,000 spare. 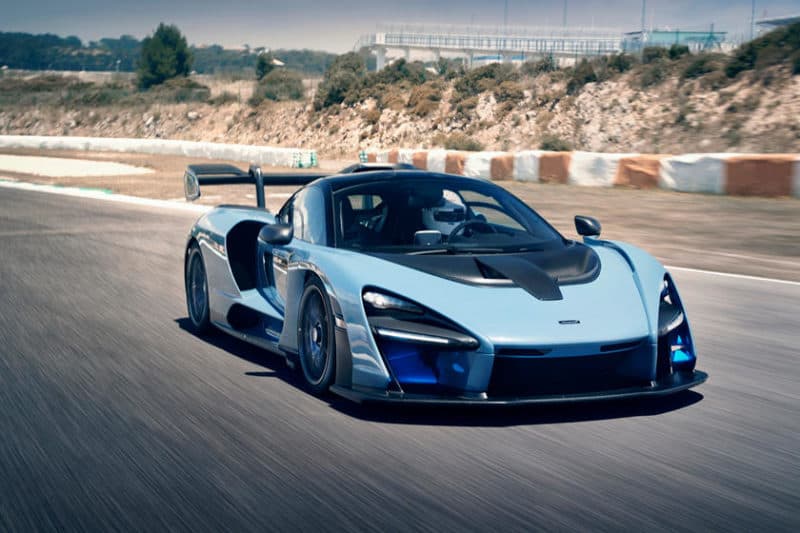 The open-cockpit Caterham Seven proudly builds upon Lotus Seven’s legacy since 1973 and latter car’s discontinuation. To this day, it’s remained one of the most capable track-day cars which is attested to by its longevity in a rather unforgiving market.

The Seven has had myriad of configurations over the decades which is a concept it sticks with to this day. For instance, there are six models to choose from on the U.S. market – from the entry-level 270 to the range-topping 620 R which is the company’s quickest model to date. It accelerates to 60 mph in less than 2.8 seconds although its supercharged 2.0L Ford Duratec inline-four engine “only” makes 310 horsepower. 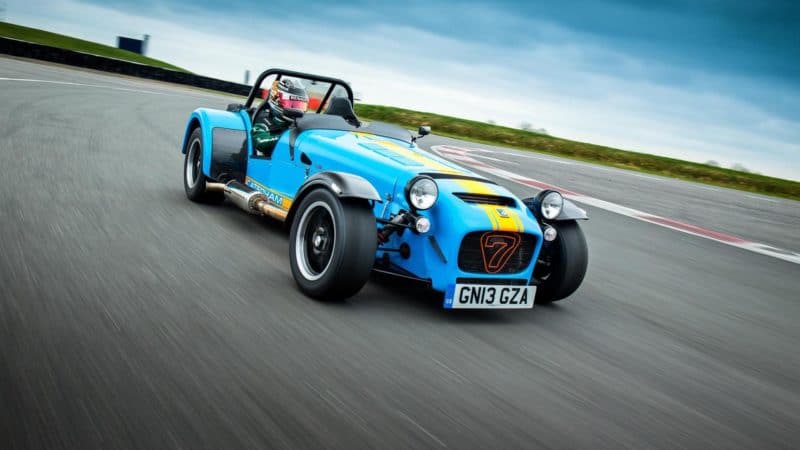 Aptly named – Performante serves as a track-focused model of the Lamborghini Huracán lineup. Introduced in 2017 (Spyder came in 2018), the Performante will be one of the last Huracáns before the entry-level Lambo sings its swan song in near future.

Magnetorheological dampers, ALA (Aerodinamica Lamborghini Attiva) system, and all kinds of unique upgrades also make the Huracán Performante one of the best Lamborghinis in recent years. According to the Italian company, the ALA system delivers 750 percent more downforce than in the regular Huracán and that’s no mean feat. For a car that costs around $300,000, the track specialist certainly boasts its fair share of goodies. 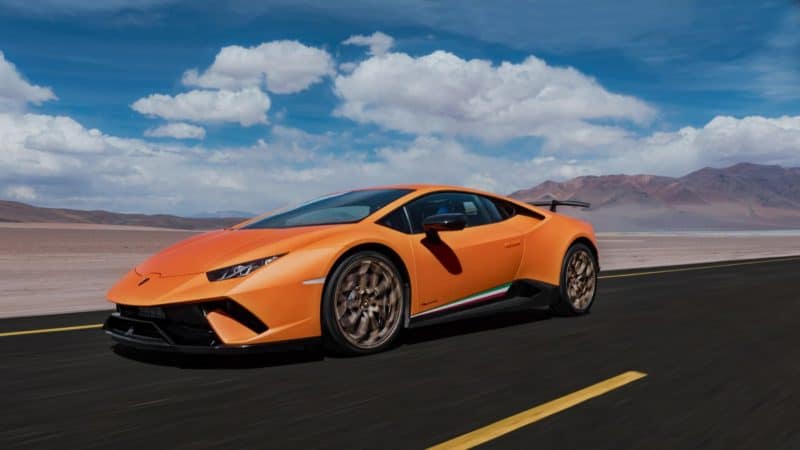 Launched in 2011 by the British Briggs Automotive Company, the BAC Mono is probably one of the wildest open-cockpit racers out there.It doesn’t come cheap either since you’ll need close to $200,000 if you want to take one home. Good thing it’s street legal so it can serve as your daily drive as well. And no one will bother you to take them for a spin since it only has one seat.

Powered by a 2.5L Cosworth Duratec 4-cylinder mill, the Mono develops 305 horsepower and routes all that power to the rear wheels via a sequential 6-speed transmission. It’ll also accelerate to as much as 170 mph while doing 0 to 60 mph in under 2.8 seconds. 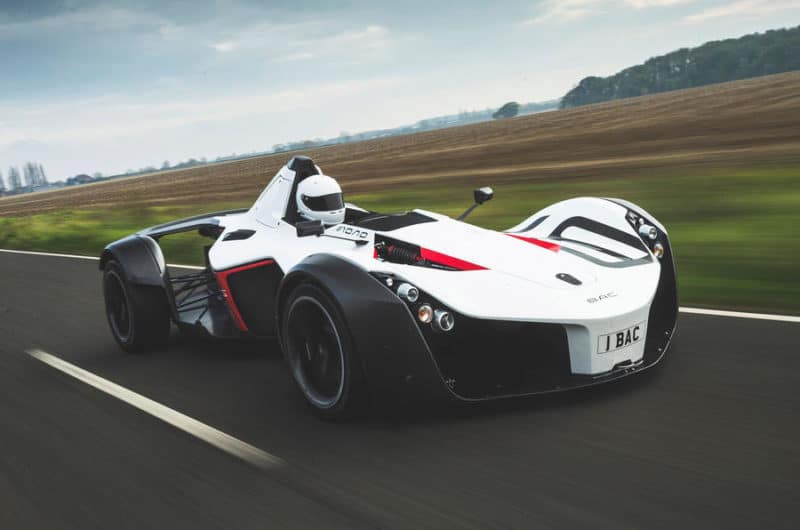 The 488 is bowing down this year but at least the Maranello company’s left us a present before discontinuing their beloved mid-engined V8 car. That present is called Pista which simply means “track” in Italian. No wonder it made it to our list of best track cars with a name like that.

But the name is only the tip of 488 Pista’s performance capabilities iceberg. The sports car produces a whopping 710 horsepower via a 3.9L twin-turbo V8 engine and accelerates to 60 mph in 2.8 seconds. The Italian have used carbon fiber wherever they could in order to save on weight and, as always,  they’ve done a masterful job. A drop-top Spyder version was also available for a short while. 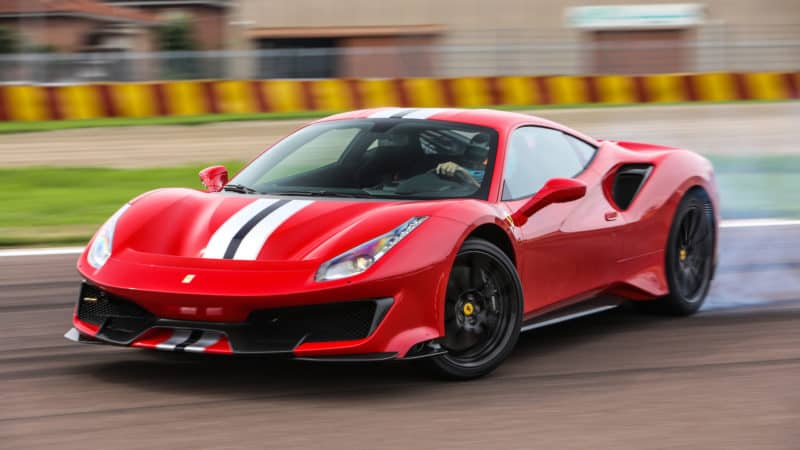 The Exige has been a part of the Lotus lineup since 2000 and the latest iteration of the small performer is called the Cup 430. It’s the most powerful Exige thus far with 430 metric horsepower (424 bhp) on tap thanks to a 3.5L Toyota V6 engine and an Edelbrock blower mounted atop of it.

The Lotus Exige doesn’t sport a limited slip diff but has something called Dynamic Performance Management system which transforms the sports car from a road to track car and vice versa via a press of a button. Sadly, you still can’t buy it in the United States. 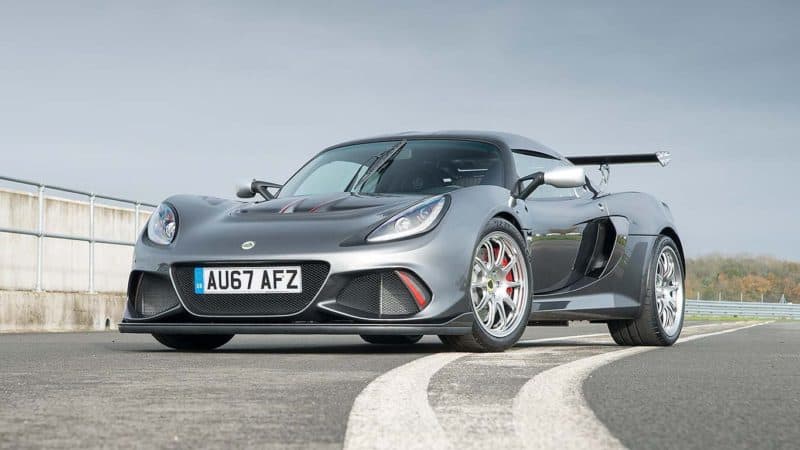 Spiritual successor of the iconic Skylines, the GT-R won’t remain available for much longer. It still rides on the same underpinnings as the inaugural 2007 models but at least the performance Nismo badge adds sticky tires, special sport suspension, and more track-worthy tuning.

The GT-R Nismo can also come with the special “N-Attack” package which consists of components used for the Nürburgring time attack. It packs 600 horsepower thanks to the uptuned 3.5L twin-turbo V6 engine and accelerates to 60 mph in under 3 seconds. For the first time in years, the base models start from under $100,000 (only $10, though) but the track specialist Nismo will set you back a further $75,000. 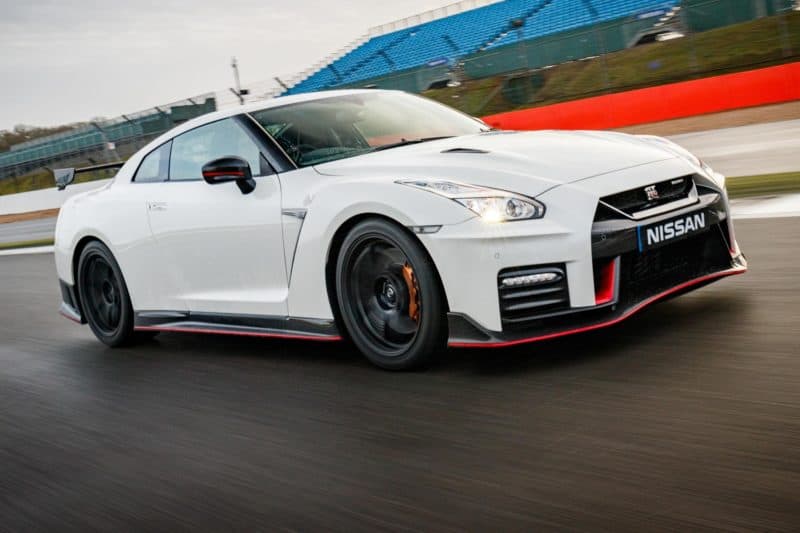 Radical has been a top name in track cars since its inception in 1997. Anyone who has ever gone to a race track has likely seen a Radical. It’s available in no fewer than seven different configurations and the RXC 600 R is the most powerful among them.

The high-performance track day car and legitimate race car pack 654 horsepower and accelerates to 60 mph from a standstill in 2.7 seconds. That power comes from a modified 3.5L Ford EcoBoost V6 engine and allows the 2,500-pounder to max out at 180 mph. 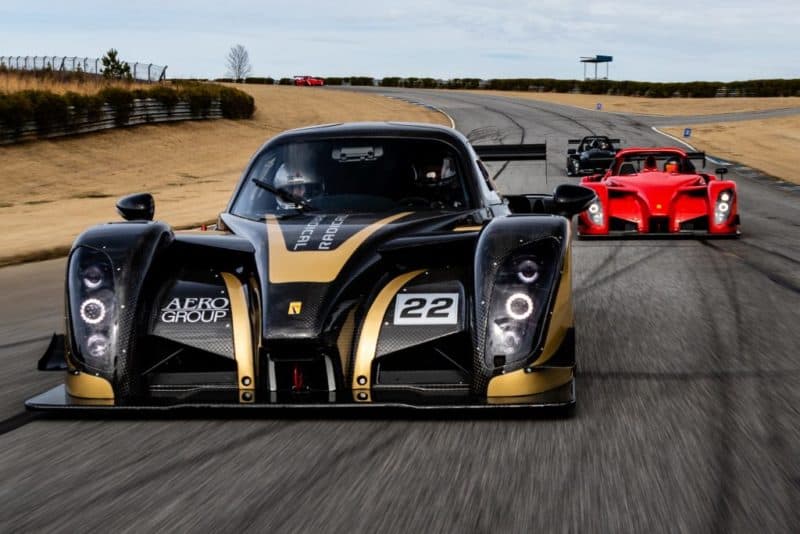