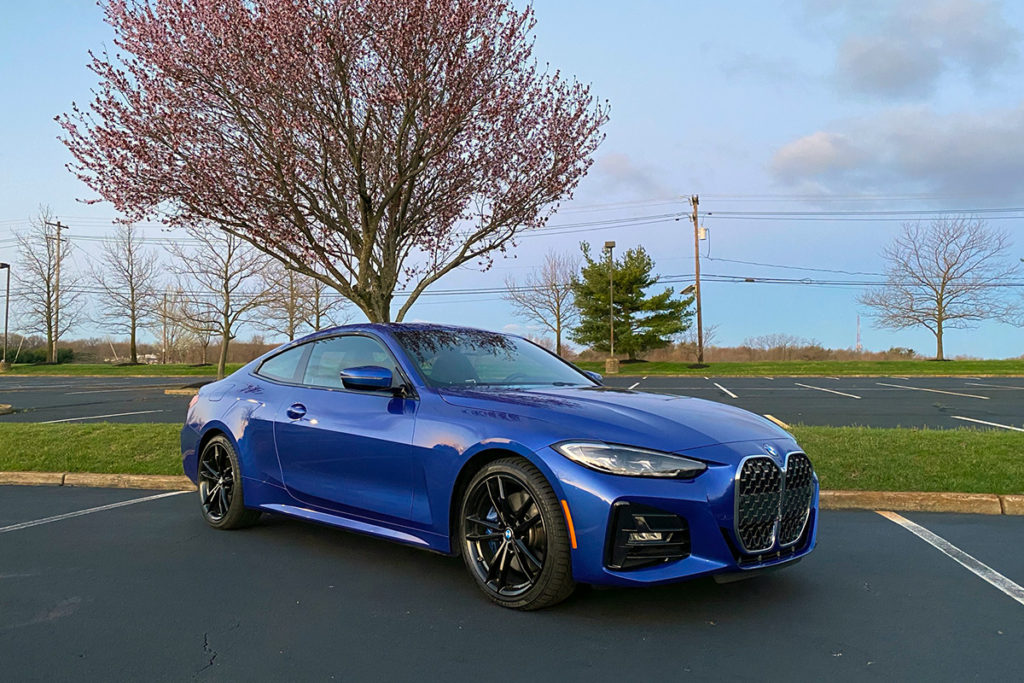 When the new BMW 4 Series Coupe was unveiled last year, all anyone could talk about was the giant kidney grilles. In fact, the backlash from BMW enthusiasts and automotive journalists alike was so severe that I really thought BMW might reconsider and make some last-minute changes before bringing the car to market.

But as you can see, the German automaker did no such thing, claiming that the “striking front end” was necessary for cooling purposes. That said, as a long-time BMW fan, I was willing to look past the grille and see how the rest of the car measured up. And after spending a week with the 2021 BMW 430i xDrive Coupe, I’m totally sold on it, massive grille and all.

Now, on paper, the BMW 430i doesn’t sound all that exciting, with a meager 255 hp on tap, which is less power than some economy cars on the market including the Toyota Camry V6, Hyundai Sonata N-Line, and others. But trust me when I tell you that this gem of an engine feels way more powerful than its numbers might suggest.

Impressive Performance For A “Base” Model 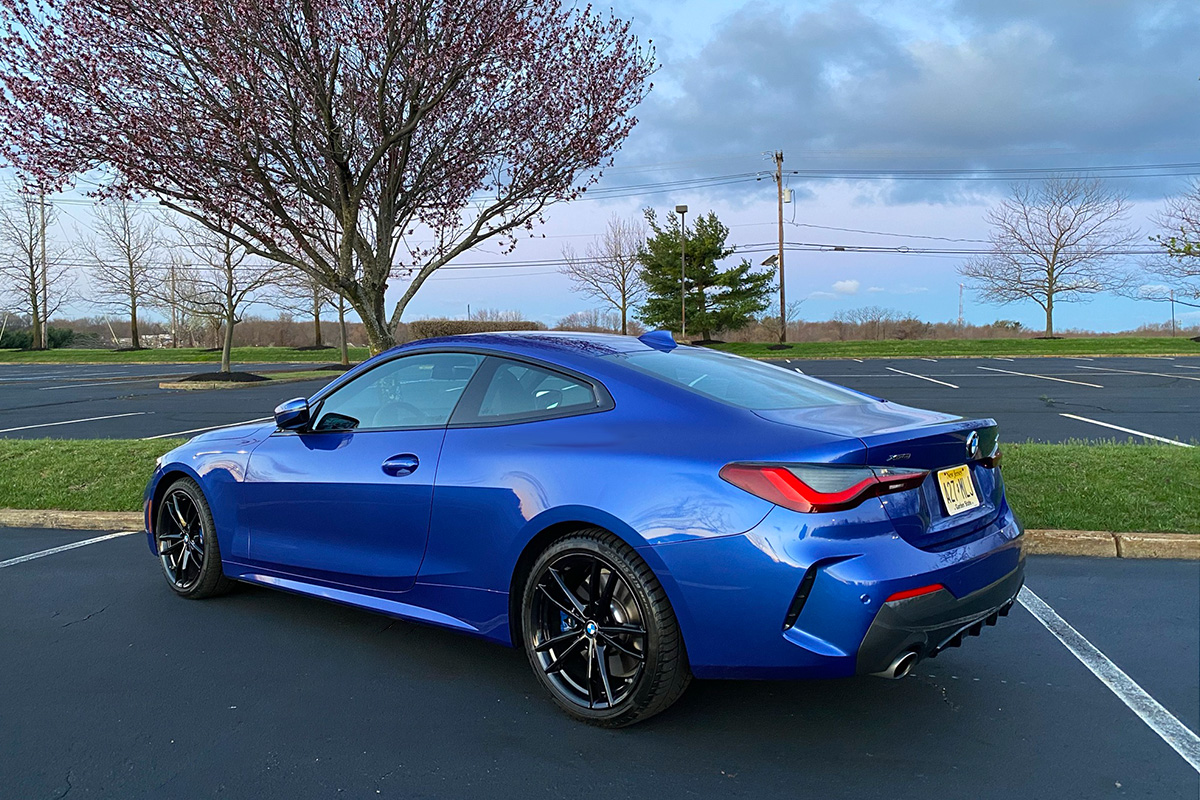 The 2021 BMW 430i xDrive Coupe is powered by a 2.0L 4-cylinder turbocharged engine that puts out 255 hp (an increase of 7 hp over the outgoing model) and 294 lb.-ft. of torque (an increase of 36 lb.-ft.), propelling the car from 0-60mph in just 5.3 seconds. What’s more, that torque kicks in at just 1,500 rpm, so the power delivery is pretty much instantaneous, and turbo lag is non-existent. Just floor the gas pedal and hold on tight as the 430i effortlessly races towards triple-digit speeds.

The 430i xDrive sends that power to the ground through a standard 8-speed sport automatic transmission with launch control. If you want to row your own gears, you’ll have to step up to an M4. My tester was optioned with the M Sport differential (standard on the M440i), which helps improve traction by equalizing drive torque between the left and right rear wheels under acceleration. It also works with the stability control system to reduce unwanted understeer.

For drivers who get their fair share of snow, the BMW 430i can be outfitted with xDrive all-wheel drive. Coupled with winter tires (which my tester was still wearing), the car is truly all-weather capable, offering rapid, precise, and fully variable distribution of torque between the front and rear wheels. In good weather when all-wheel drive isn’t necessary, all the power is directed to the rear wheels, giving you the best of both worlds.

Agile And Sporty — Without The Rough Ride 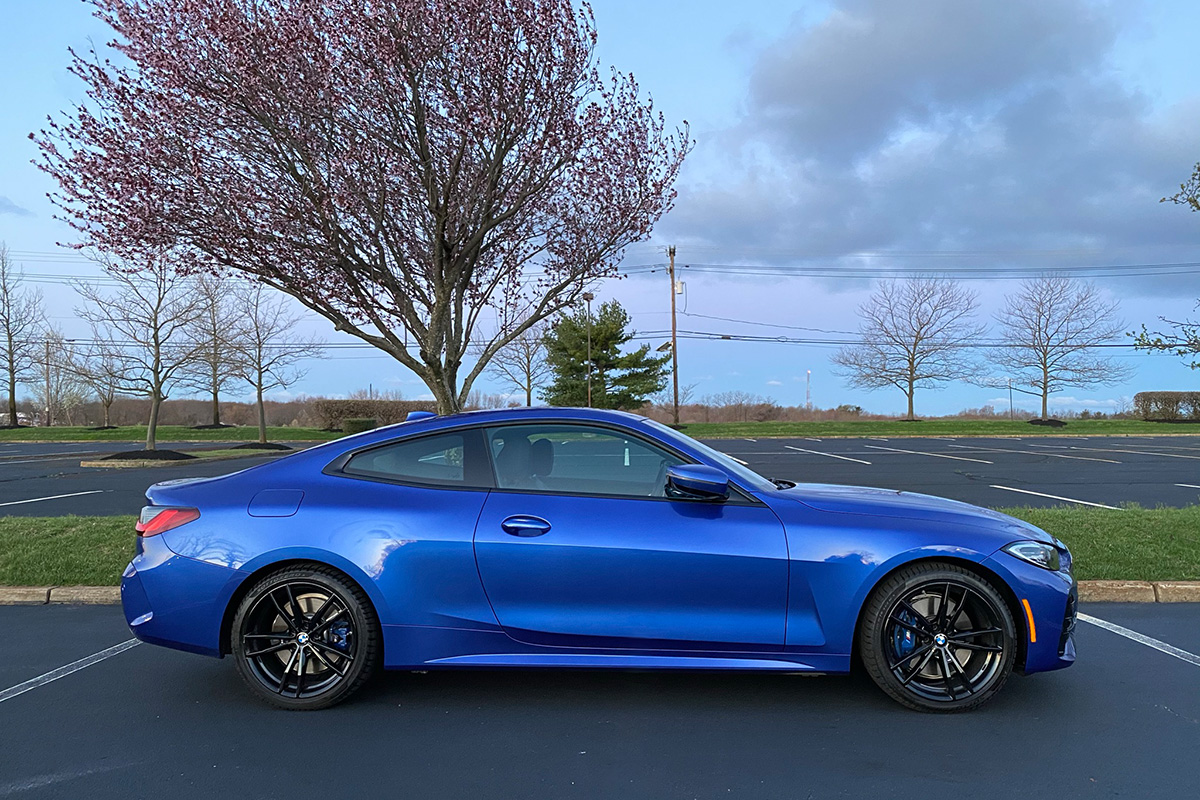 Handling-wise, the 2021 BMW 430i xDrive isn’t quite as razor-sharp as some drivers might like, but it’s still very agile and precise — just without the punishing ride that you find in the M models. Personally, as someone who has driven harsh sports cars for my entire life, I appreciated the more compliant yet still sporty ride.

The optional Adaptive M Suspension allows you to vary the dampening on the fly, from the well-balanced, long-distance comfort of Comfort mode through to the highly dynamic set-up activated in Sport, depending on your mood and the road ahead.

For those looking for an even more engaging drive, the optional M Sport suspension (which is standard on the BMW M440i xDrive) features firmer spring settings, stiffer bushings and mounts, firmer anti-roll bars, and greater negative wheel camber. While my tester was outfitted with this suspension, these parts should definitely address any complaints about the softer ride.

The steering feel on the BMW 430i is fantastic, with plenty of feedback from the road despite being an electric power steering system. The Variable Sport steering makes it easy to maneuver at low speeds without much effort. The optional M Sport Brakes on my tester came with vented disks with four-piston front fixed and single-piston floating rear calipers, and let me tell you, they stopped on a dime. As for the tires, the 430i should have been wearing 19-inch performance non-run-flat tires, but my tester came wearing winter tires due to the time of year.

A Face Only A Mother Could Love 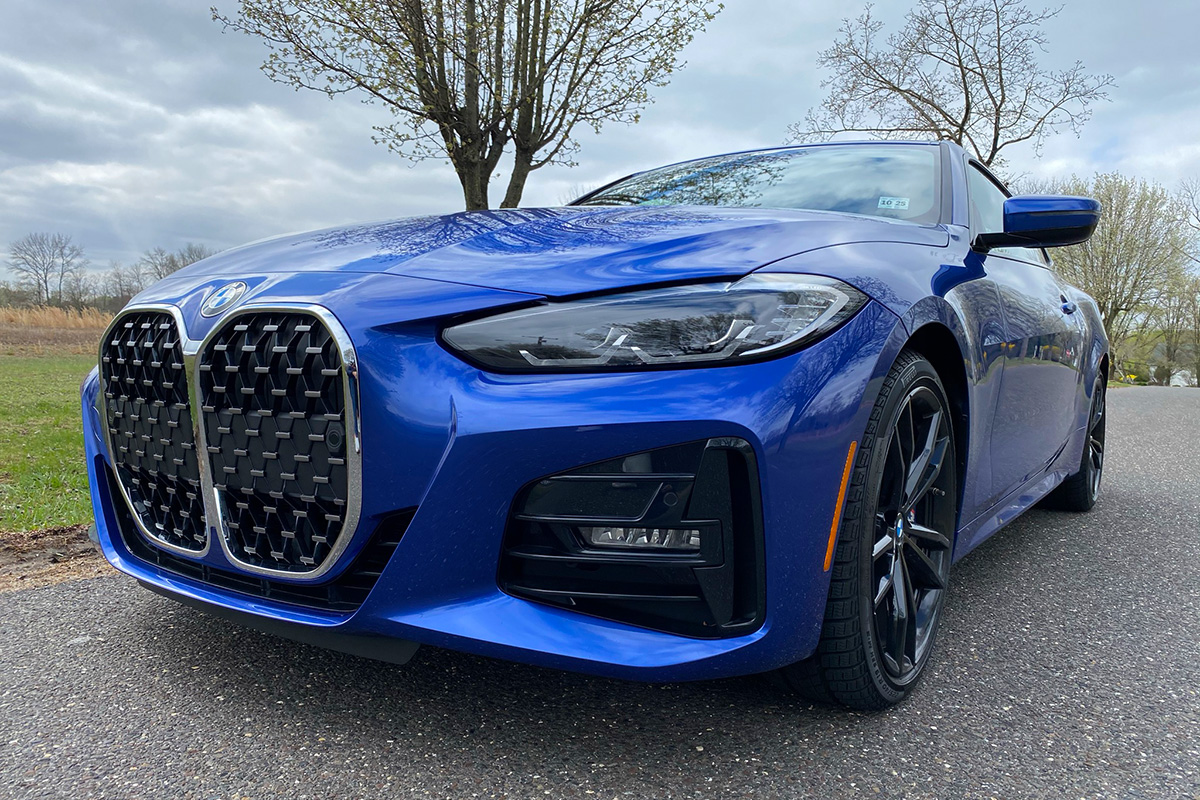 You’ve got to give BMW some credit here. They knew that their controversial grille design struck a chord with people, but they stuck with their design. And honestly, I got a wide variety of reactions during my week with the car. Surprisingly, many of my friends actually liked the car’s looks, drawing comparisons to Alfa Romeo, Maserati, and others. Guess what all those cars have in common? Large grilles. But the reaction was vastly different at my local Cars and Coffee, with people up in arms over the new styling.

Now here’s the funny thing. I really had a problem with the front-end treatment initially … but by my fifth day with the car, I found I actually didn’t mind the grille, as much as I hate to admit it. Or maybe it’s just because I loved how the 430i drove that I started to get over the looks — I’m not really sure. Sometimes a design just takes a while to grow on you, and that’s how I’m feeling about the grille now.

That said, the rear of the car is a little confusing to me, looking less like a BMW and more like an Acura TLX or Lexus RC. It’s not bad looking, per se (though it’s pretty heavily stylized with the diffuser and vents and such), it’s just quite a departure from the previous model.

A No-Frills Interior That Gets The Job Done 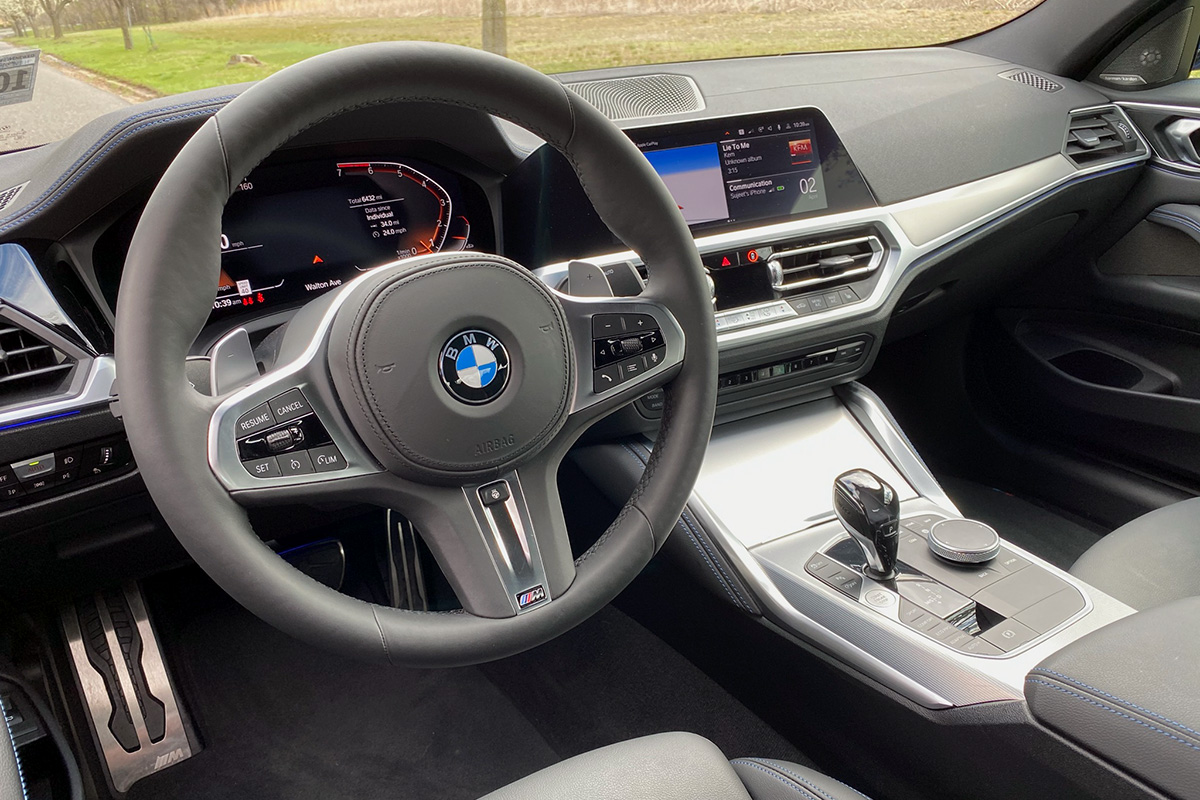 The interior of the 2021 BMW 430i xDrive is very driver-focused, with everything within reach and easy to navigate. While the cabin isn’t quite as fancy as some of the competition, it’s still a nice place to call home. The 10-way power sports seats hold you in place for spirited driving, while still being super comfortable over long distances. The Premium Plus package adds a heated steering wheel, keyless entry, lumbar support, heated front seats, ambient lighting, a head-up display, and Live Cockpit Pro.

BMW’s iDrive 7 infotainment system is very easy to use, and you can interact with the system in a variety of ways by using the iDrive controller, touchscreen, multifunction buttons on the steering wheel, or by saying “Hey BMW” and using BMW’s Intelligent Personal Assistant. With Live Cockpit Pro, you get an upgraded 10.25-inch center touchscreen control display and a fully digital 12.3-inch instrument display, along with navigation.

Wireless Apple CarPlay and Android Auto are included, though ironically wireless charging is a $500 option. SiriusXM with 360L and WiFi Hotspot are also standard. As you might expect, there’s a ton of safety features that also come standard, including Active Guard, Active Driving Assistant, and Active Protection. 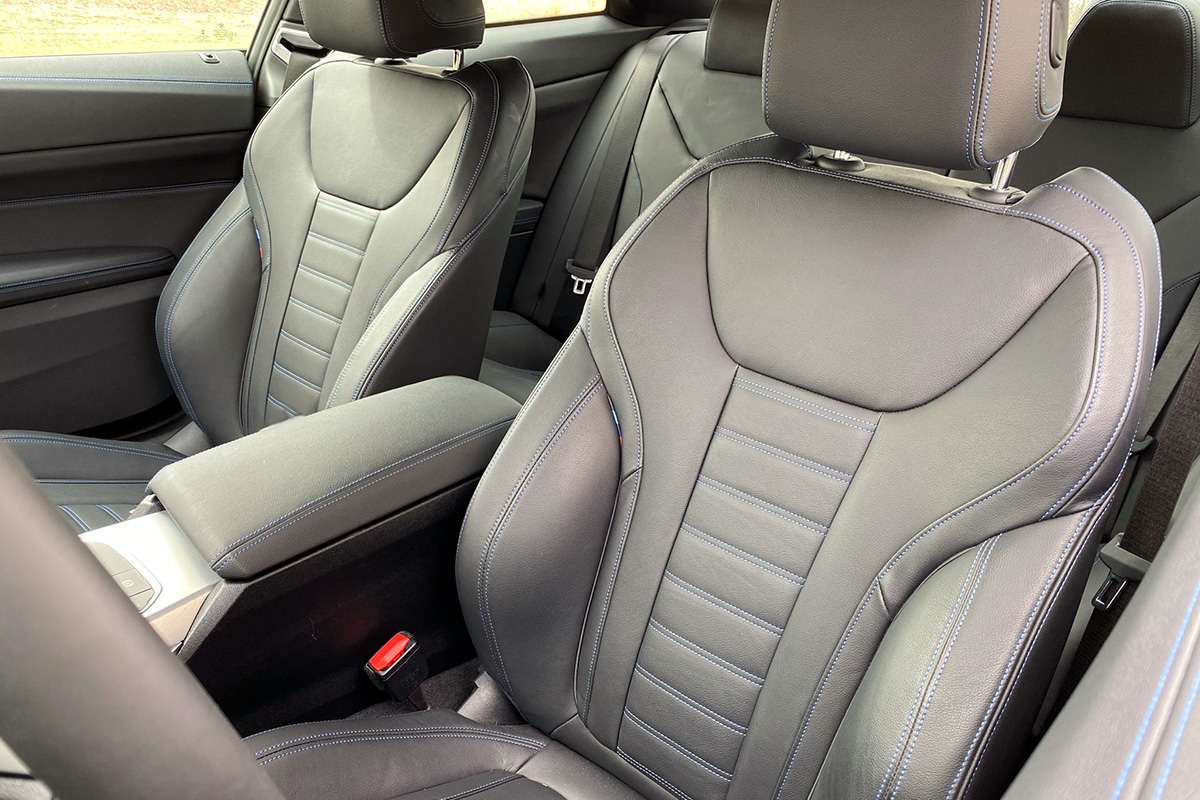 Overall, I was really impressed with the 2021 BMW 430i xDrive Coupe during my week with it, as it improves on the already great outgoing model in every way. Though I understand that the new styling might not be for everyone, as a former naysayer myself, I encourage you to drive the car before writing it off, as it’s just a terrific little coupe that checks off all the boxes.

With that said, we’ve got to talk about the price. While the 2021 BMW 430i xDrive has a base price of $47,600, our well-optioned tester came in at a whopping $61,220. That’s a lot of money for a “base model” 4 Series, considering that the M440i xDrive Coupe starts at $58,500 and comes with way more power (382 hp and 364 lb.-ft. of torque), along with a ton of standard features. It’s just something to think about if you start checking off option boxes judiciously and see the price ballooning.

There’s no doubt about it, the 2021 BMW 430i competes in a crowded and competitive space, facing off against the likes of the Mercedes-Benz C-Class, Audi A5, Lexus RC, Infiniti Q60, and more. But even against the competition, I feel like this BMW is truly the ‘Ultimate Driving Machine.’


8 Best 2020 Convertibles
33 Great Cars With Boxy Design That Would Look Cool Even Tod...
Three On-The-Go Containers For Overlanding Water Storage [Re...
Best of 2019 Volkswagen
Dream Cars Part 2. The AERO 3S T-Rex.
What is ECU Remapping and why you should do it.