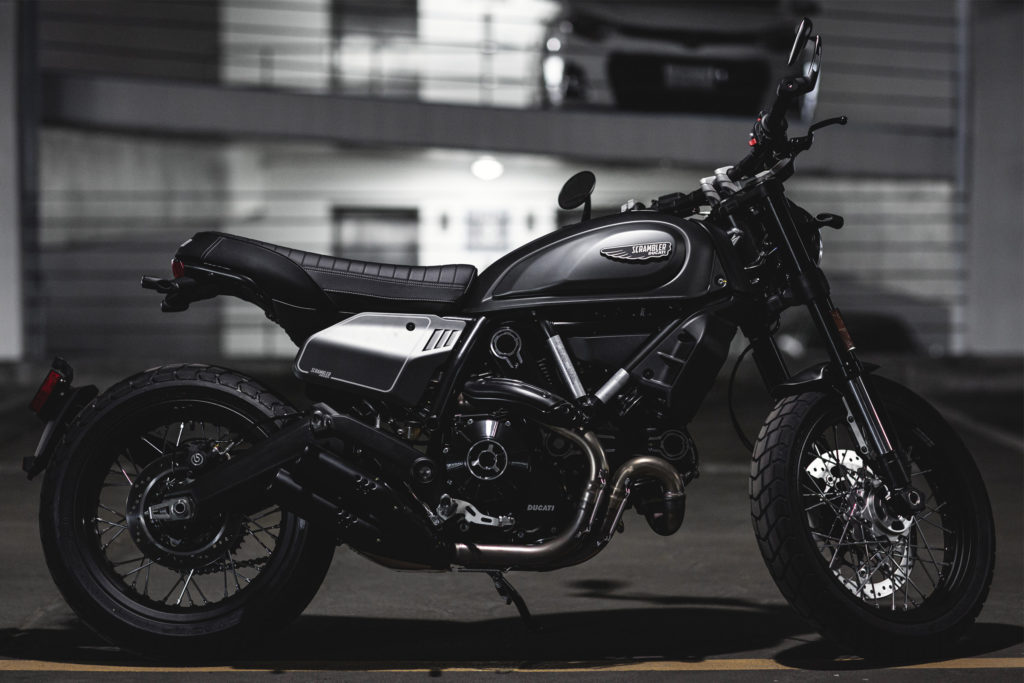 New for 2021, Ducati’s lineup gets a remix with the Ducati Scrambler Nightshift, a stealthy ride intended to replace the Scrambler Café Racer and Full Throttle. The bike’s updates are mostly style-based and pulled from the aforementioned models.

It sports the bar-end mirrors from the Café Racer and the number plates from the Full Throttle, along with the flat bar from the 1100 Sport Pro. That doesn’t mean that the Nightshift doesn’t have its own tweaks. Spoked wheels and a flat bench seat are both unique to the Nightshift.

The air-cooled L-twin engine is based on the older Ducati Monster 796 (803cc) engine, with several differences. The valves, injectors, intake, exhaust, and airbox are different, and a lighter hydraulic clutch replaces the cable clutch.

Since the engine is based on a decade-old model, the output (73 hp at 8,250 rpm and 48.8 lb.-ft. at 5,750 rpm) won’t blow your socks off. Ducati opted for the more aesthetic choice versus a modern water-cooled engine, but that’s one of the Nightshift’s strengths.

The blend of modern and classic styling gives the Ducati Scrambler Nightshift a classic racer vibe, and the brooding styling makes it look like something Batman would roll around on when he isn’t fighting crime. The stock bike is highly customizable, which is typical of the Scrambler line. You can swap out parts fairly easily, and there’s a huge range of choices when it comes to accessories, exhausts, and other add-ons.

That isn’t to say that the Ducati Scrambler Nigthshift is all about looks. The bike’s 492-pound wet weight, combined with a flat torque curve and even power delivery gives it a poppy, playful feel.

The narrow, flat handlebars offer a more forward riding position, but in practice, it’s much more comfortable than it looks. To be fair, I’m 5’8″ and taller riders may not agree with me. This stance required me to lean off the bike while cornering more often than I do on bikes with a higher stance, but it only added to that fun, zippy feeling that I’ve come to associate with the Nightshift.

It’s as comfortable riding around town and zipping through traffic as it is racing down I-5 to make it to a photoshoot on time. After spending the last few years on a 1200 Harley Sportster, I was prepared to be underwhelmed by the Nightshift. But the low weight, responsive feel, and enthusiastic performance had me double-checking the price tag whenever I came back from a ride.

And with an MSRP of $10,995, the price of the Ducati Scrambler Nightshift is not a deal-breaker. For an entry-level rider, it may feel a bit steep, but the unique, custom-inspired design, friendly handling, and playfulness make the price seem more than reasonable.

Conclusion: Nightshift Has Looks and Substance

The Nightshift won’t blow your socks off at top speed, but it’s an excellent way to get around town without getting the adrenaline shakes when you get to where you’re going. It carries on the Scrambler tradition of being fun, lightweight, and powered by a time-tested engine. Plus, it looks as good as it rides.

Which is definitely saying something.

Billy Brown loves automotive adventures. He has tested and reviewed autos for various print and digital outlets for the past decade. His testing methods have included doing donuts in a Volvo XC90 in Barcelona, drifting a Lexus ISF around switchbacks in Northern California, and jumping a Subaru Crosstrek in a mountain bike park in Miami. If you couldn't guess, Billy loves to have fun with vehicles and share his enthusiasm and expertise with others.