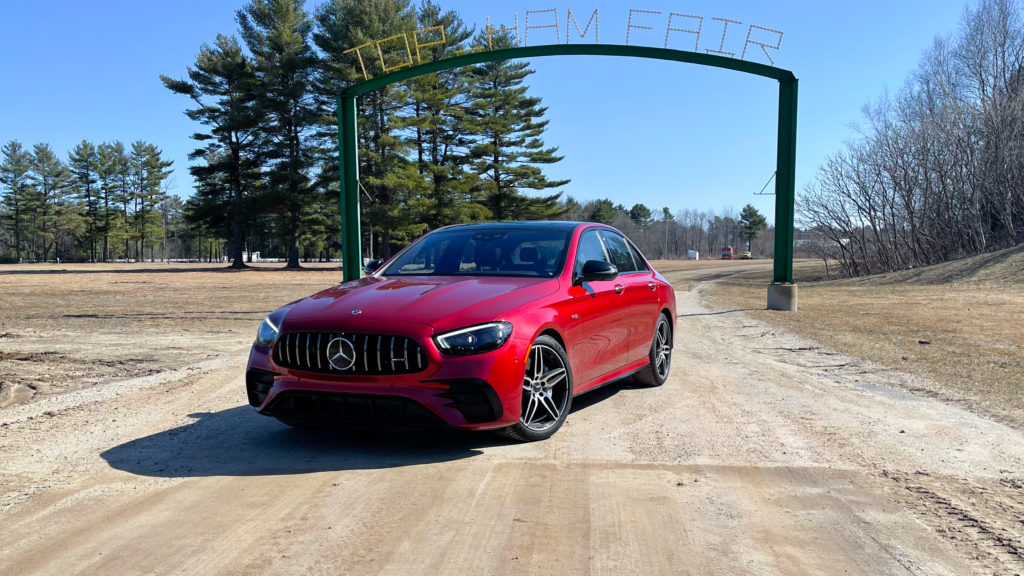 Numbers these days are a funny thing. We’re bombarded by unsettling statistics from a scary world, but, at the same time, we’re amused by the spec-sheets of our favorite vehicles. I had a run-in with a couple of important digits a few weeks ago and came away thinking that sometimes less is still plenty. I’m talking about the 2021 Mercedes-AMG E 53 Sedan.

With a $74,950 (which includes the $1,050 destination charge) starting price, this sedan is considered the “entry point” to E-Class cars that have been massaged by Mercedes-Benz’s tuning arm. Above it in the AMG catalog lives the $108,550 E63 S, which can also be had as a fire-breathing station wagon. Even though the number on the back of the E 53 tells the world you didn’t buy the “hot one,” there’s a near-zero chance that any of that will matter to you once you’ve had a go behind the wheel. 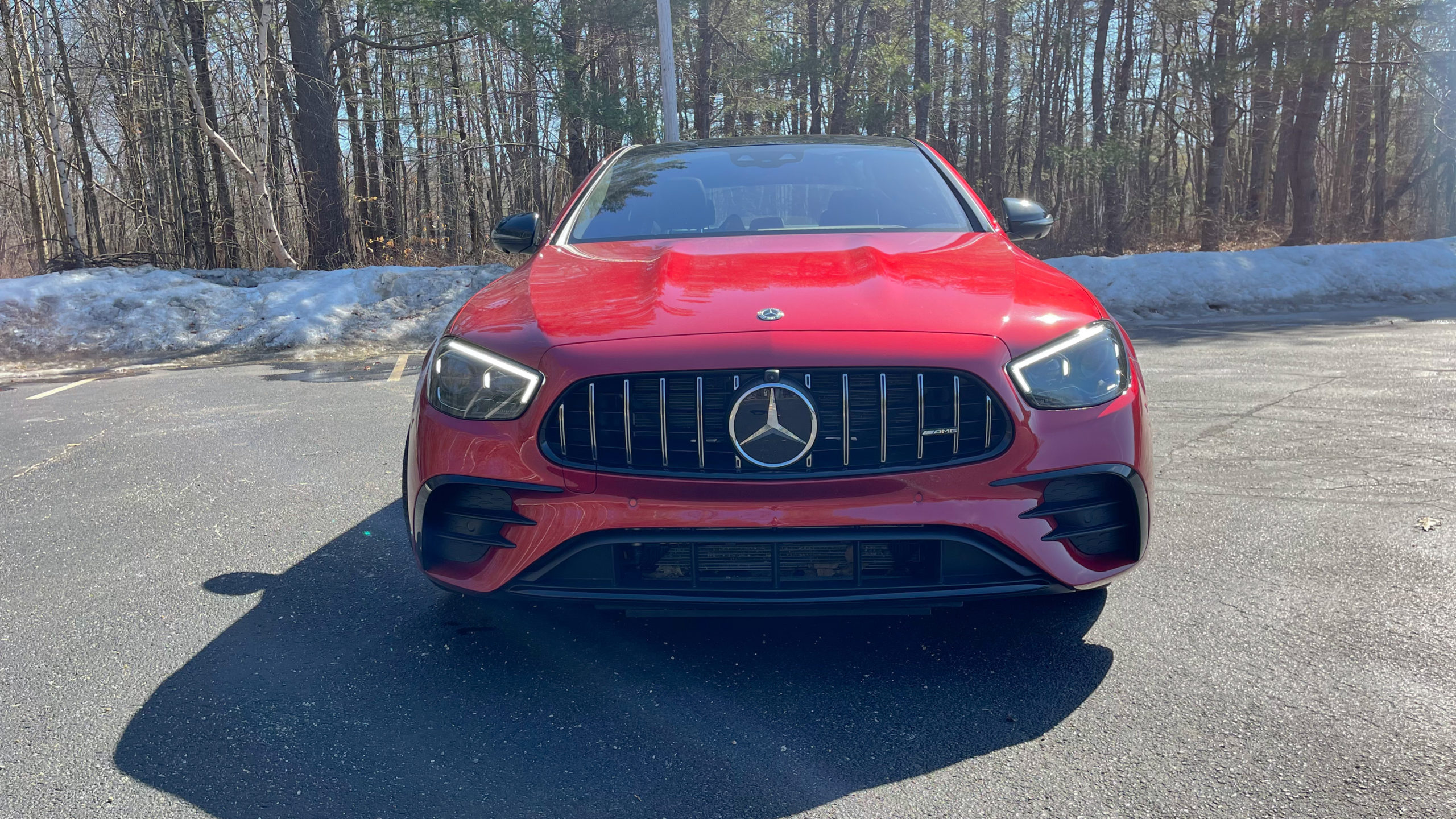 The magic starts, as it should, under the E 53’s hood. The car derives 429 hp from its AMG-enhanced turbocharged 3.0L inline-6. And while it’s true that AMG-driven E-Class cars boast over 600 hp in their hottest forms, the E 53 belts out its performance with more than enough growl to make its point heard.

Acceleration to 60 mph from a standstill takes just over 4 seconds, and the 9-speed automatic transmission cracks off shifts with both speed and eagerness. The engine is supplemented with an integrated starter-generator and 48V lithium-ion battery, which provides juice to start the engine and power the water pump and air compressor. The system also generates more torque, which is available immediately and helps boost off-the-line performance.

A further sprinkling of performance-pixie dust for the E 53 comes from its driveline and suspension. The 4Matic+ all-wheel-drive system features torque vectoring and the ability to shift up to 100% of the power to the rear wheels, depending on the conditions. This smart system can divvy up power to whichever wheel (or wheels) needs traction the most. 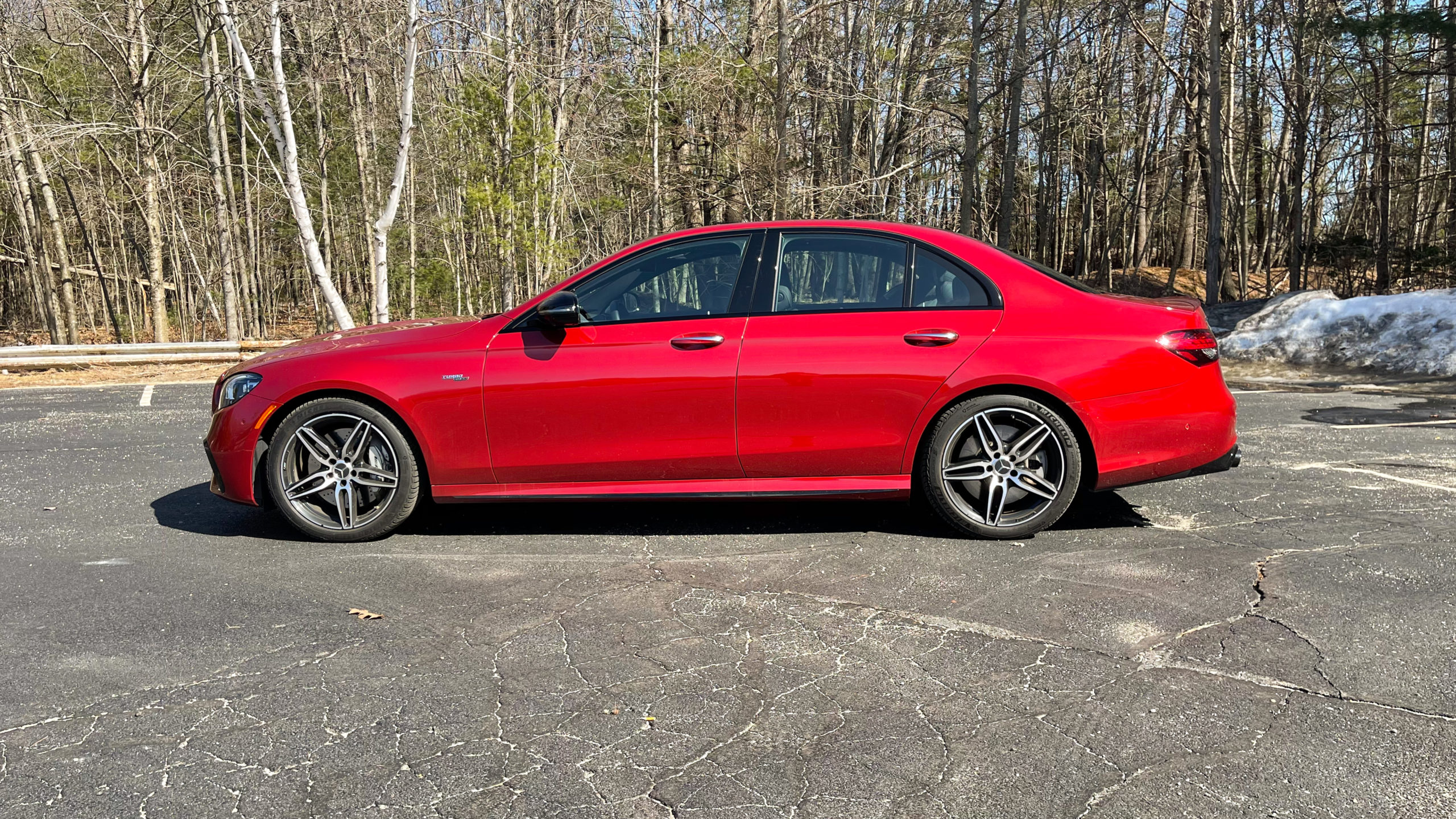 The E 53 comes with an adaptive air suspension system that automatically adjusts to changing road conditions. It will lower the car at speed to improve aerodynamics and handling.

Changing the car’s drive modes also shifts suspension settings, but if you’re looking for a Mercedes-like ride, moving past Comfort mode isn’t recommended for anything but the smoothest road surfaces. Both the standard 19-inch and the upgraded 20-inch wheels will convey every imperfection in the pavement to passengers’ backsides, though things stay mostly acceptable outside of Sport and Sport+ driving modes.

The tradeoff to the ride quality, of course, is handling, and here the E 53 doesn’t disappoint. The car remains balanced and confident in high-speed corners, qualities that are boosted by its communicative and responsive steering. 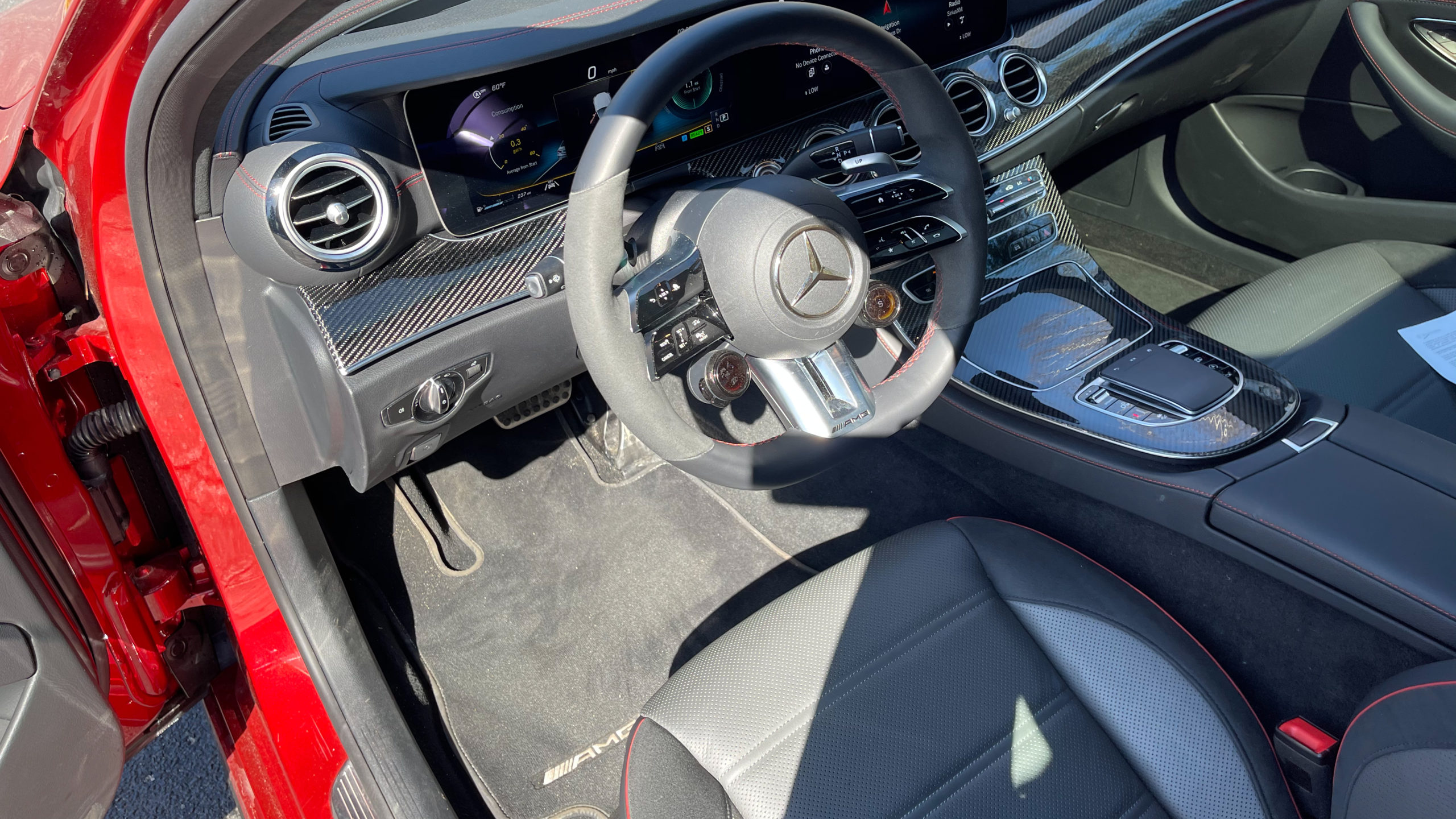 My test car’s window sticker tallied a total price of $101,780, which is just a couple grand shy of $30,000 worth of options — enough to buy a decked-out Toyota Corolla. Many of the added-cost options landed in the E 53’s cockpit, such as the $2,990 titanium grey and black Nappa leather upholstery package, the $1,320 active multi-contour seats with massage, and a $1,600 headliner upgrade package. Though you might scoff at the hefty price of options and wonder why anyone would want to turn a $74,000 price tag into one that crests six figures, from behind the wheel, the optics improved greatly.

The E 53’s cabin has exceptional ergonomics, clever and usable tech, and body-hugging but comfortable seats. The heated, ventilated, and massaging thrones in my test car were soft where they should be and offered a wide range of adjustability, which allowed me to dig into my preferred low seating position.

As in other AMG models, the E 53 is available with adaptive seating, which raises and lowers bolstering to help keep front passengers’ bums in place. The car’s center console and door armrests are situated just high enough to cocoon front passengers but not so high as to be awkward — it’s a fine line, to be sure. 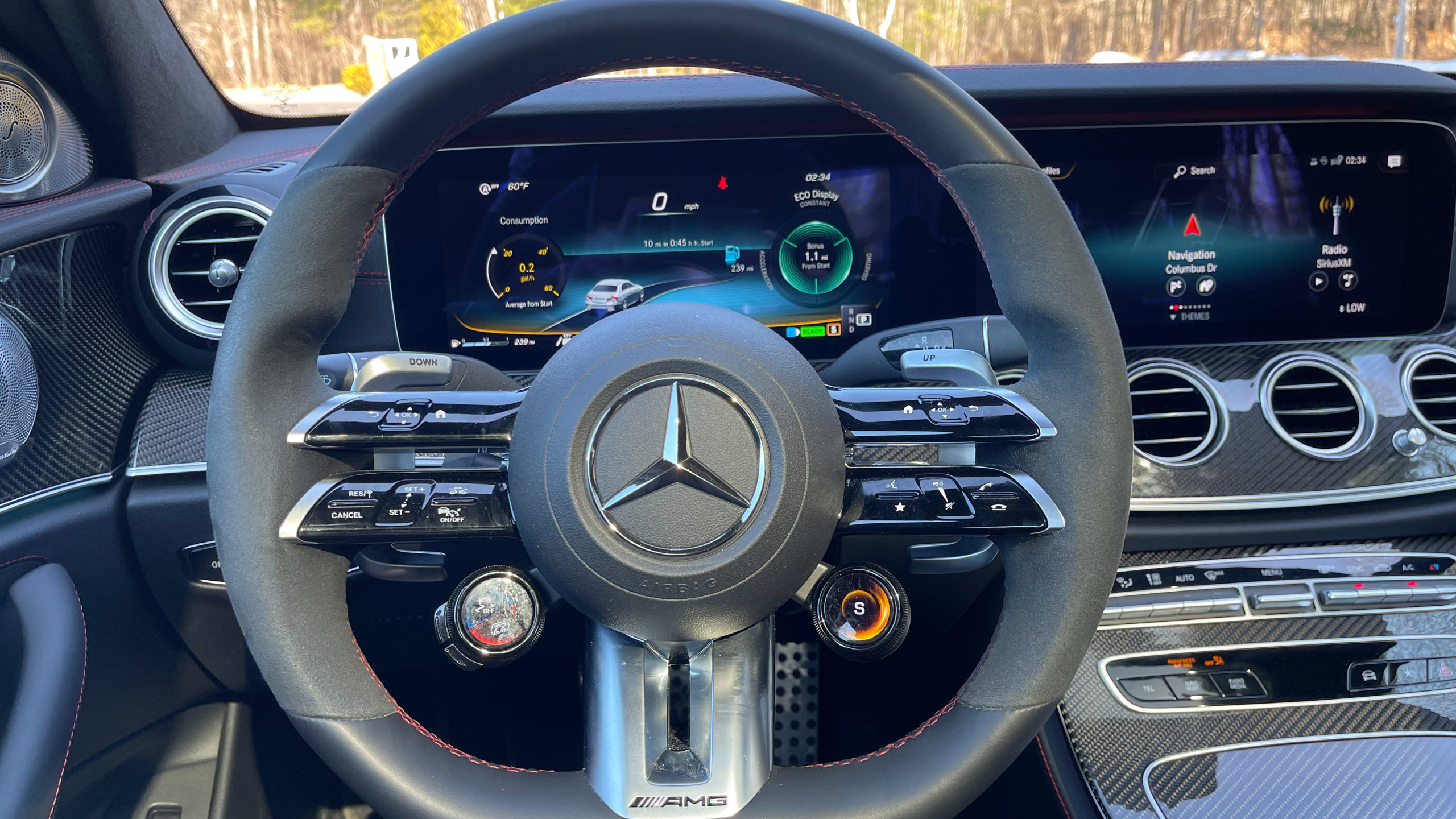 To keep the driver’s hands and eyes focused on the road, AMG fitted the E 53 with a luxurious Alcantara- and leather-wrapped steering wheel with several quick-reach controls for vehicle and systems settings. Looking at the thing head-on, it’s easy to be overwhelmed by the sheer number of buttons and switches, but the learning curve is shallow and muscle memory when reaching for the buttons builds quickly.

The wheel’s most noticeable features are the two AMG drive unit control dials, which are mounted to either side of the bottom spoke. Each features a display screen and has either buttons or a rotary to control drive modes, suspension and exhaust settings, and traction control. Though they’re redundant to the controls in the center console, the ability to flick a thumb and change drive modes or tighten up the suspension is a big deal when pushing the car hard. 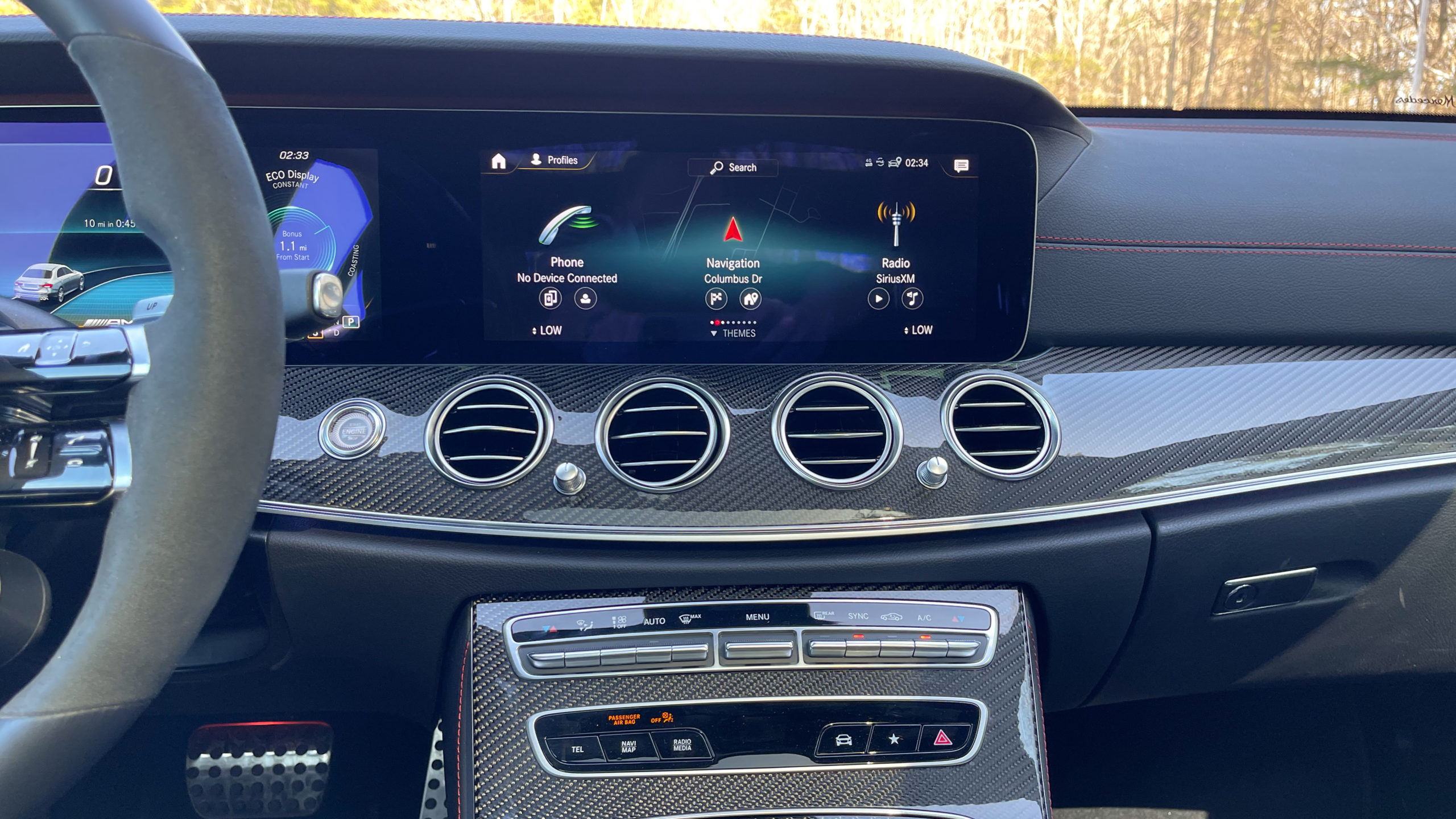 Tech is also a strong point in the E 53 which has not one but two 12.3-inch displays gracing the dash. The first foot-long screen handles gauge cluster duties and can be configured with various information and data, such as maps, all-wheel-drive performance, and a G-force meter.

The second display is the actual infotainment touchscreen, where the latest version of the Mercedes-Benz User Experience (MBUX) software lives. It effortlessly handles Apple CarPlay and Android Auto, as well as vehicle functions, such as the optional AMG Track Pace MBUX app.

Of particular note is the $4,550 Burmeister High-End 3D surround-sound system, which features 23 speakers, a 1,450-watt amp, and tweeters that physically rotate in and out of the front doors’ sail panels for staggering visual and audio effect. 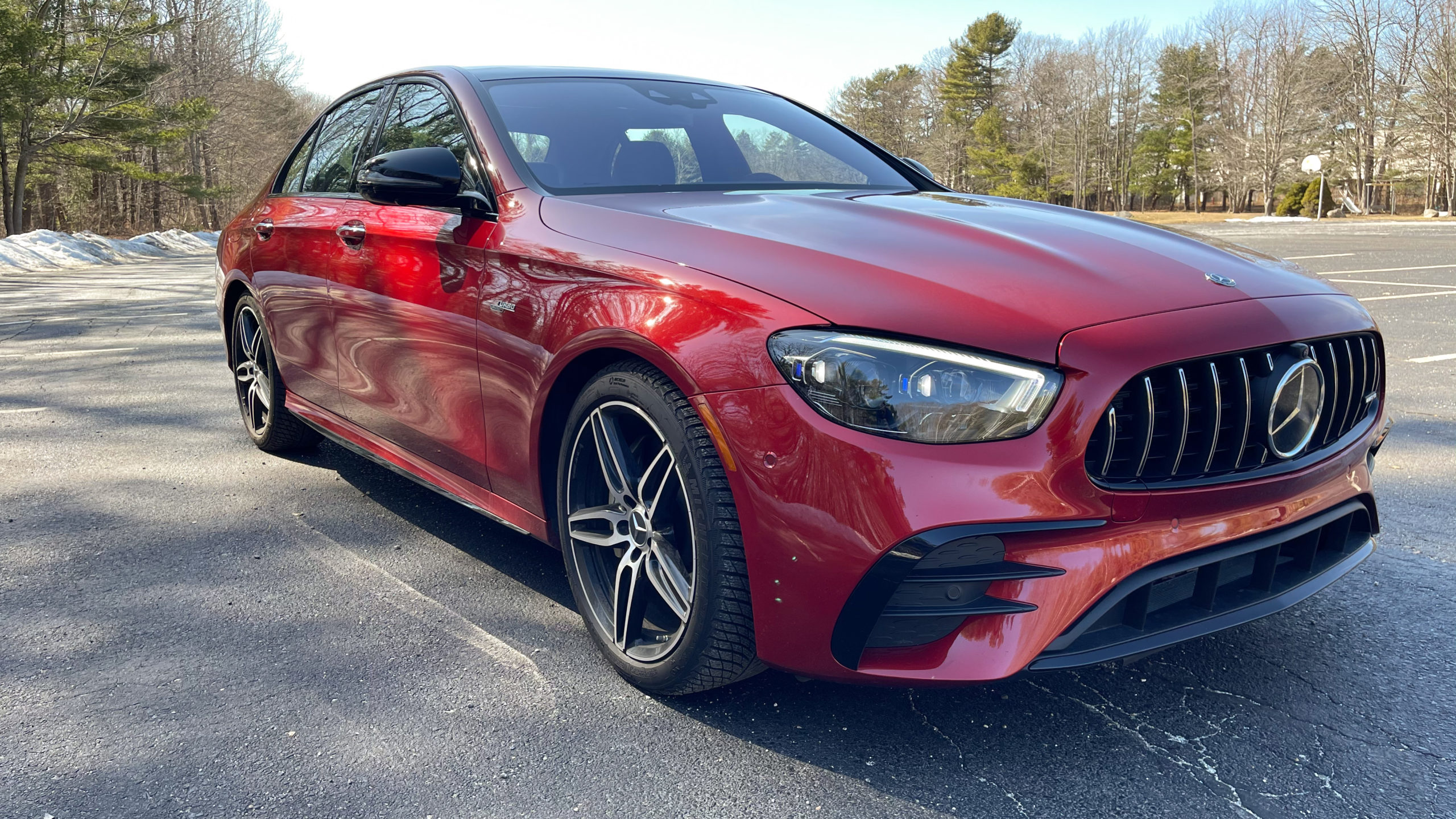 I’ll make the point again that there’s no real need to spend an extra $30K to get the amped-up AMG E 63 S unless you’re caught up in who’s got the “best Mercedes” contest. The E 53’s 429 hp and howling V6 soundtrack should be more than enough to get anyone quaking, and once your foot hits the floor, the number on the deck lid won’t matter much.

The car also stands up well against other big-bodied performance sedans, such as the Porsche Panamera and BMW 5-Series, though it’s not as quick or as expensive as a full-bore BMW M car, such as the M5. All-in-all, as a so-called “entry-level” AMG, the 2021 Mercedes-AMG E 53 can hold its own. 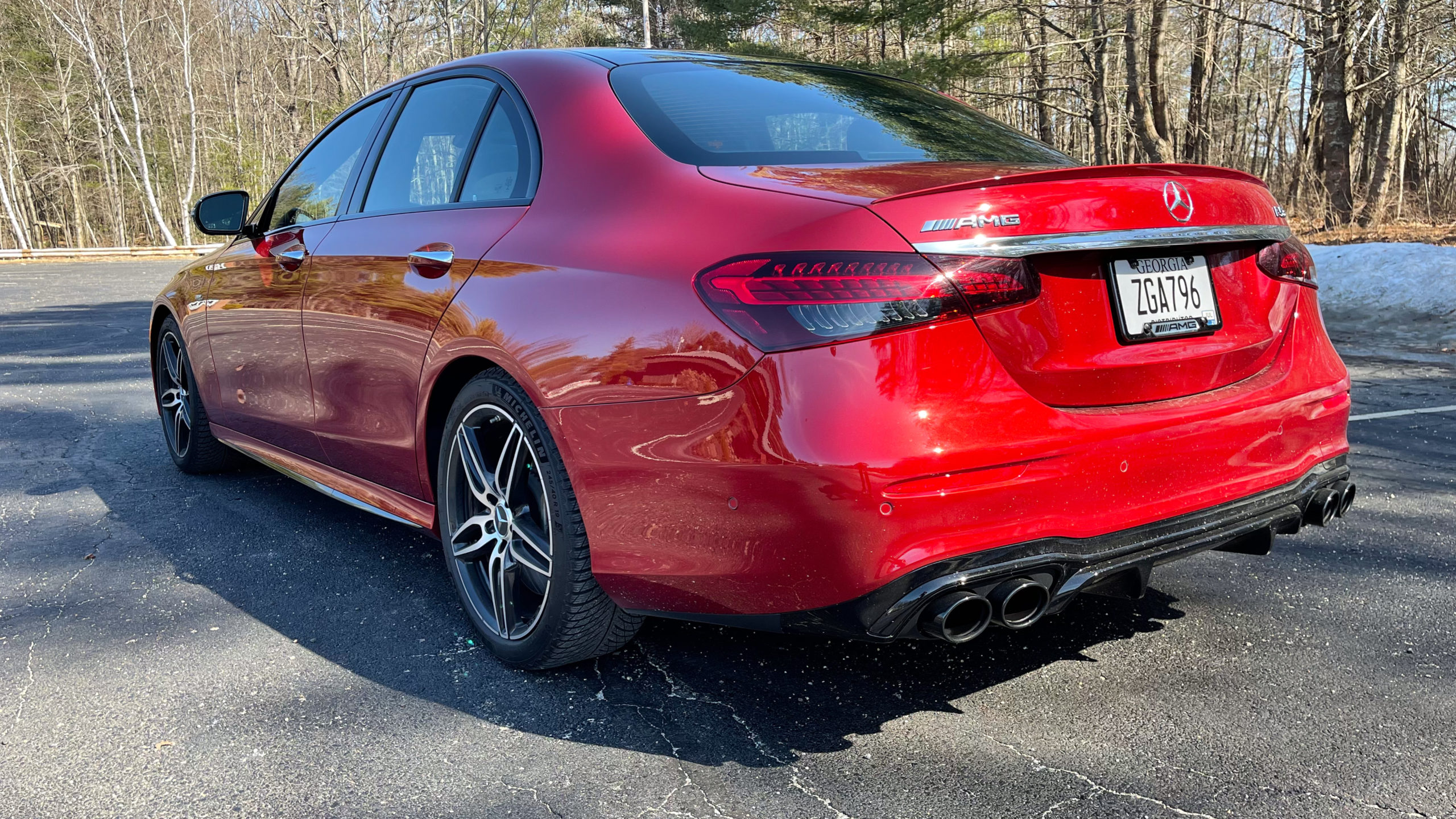