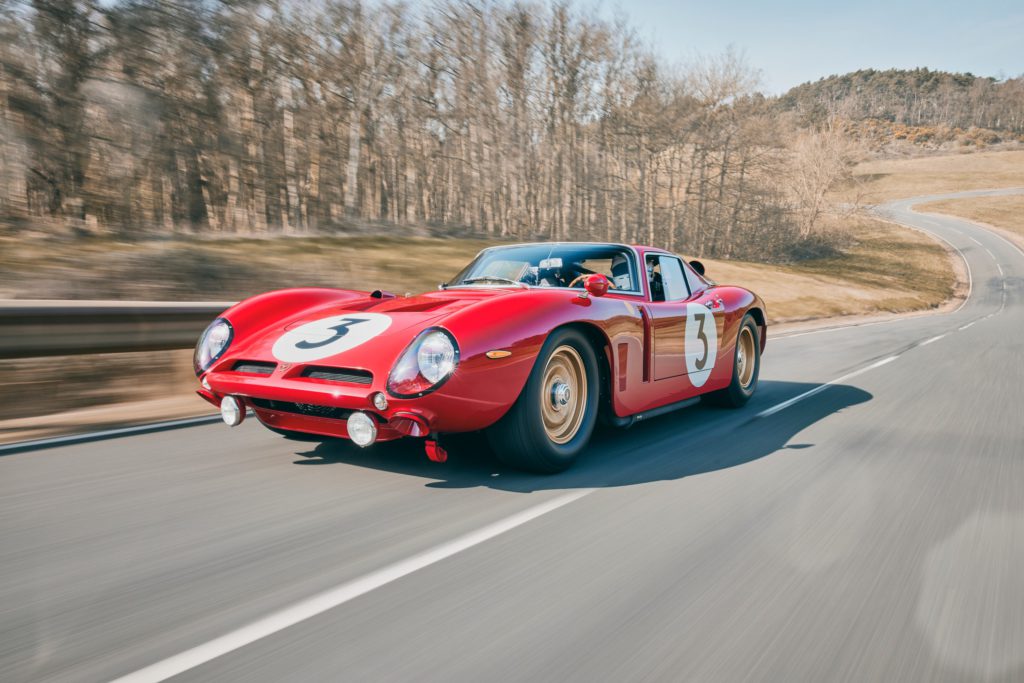 The Bizzarrini 5300 GT Corsa Revival is a 60-year-old racer that you can buy brand new. Bizzarrini folded in 1969, but the brand has been brought back from the dead. New ownership picked up exactly where the founder left off. Using original drawings to build 24 continuation cars. The company is now finishing up testing or the Revival with deliveries to lucky customers ready to start next month.

It’s a stunning Italian sports car, from a time when the country built some of the most sensual shapes ever put on the road. But first, a bit about the company and the name.

Giotto Bizzarrini started his career at Alfa Romeo. A test driver with an engineering degree, he had a knack for helping the automaker figure out its failures and build better-driving cars.

After a three-year stint, Bizzarrini moved to Ferrari. Starting as a test driver there, Bizzarrini quickly became the company’s chief engineer as well as continued to develop, design, and test the prancing ponies.

At Ferrari, he designed the 1962 250 GTO, a sports car that would dominate its class for three seasons. After leaving Ferrari, he turned a 250 GT SWB into the now-famous Ferrari Breadvan for a private owner. A year later, his new company designed the V12 that would power every 12-cylinder Lamborghini from 1964 all the way through 2010.

Bizzarrini started the company that would wear his name in 1964. Though it would fail just five years later, the company created three amazing designs. Of the Bizzarrini 5300, 1900 GT Europa, and the P538, the 5300 was the most successful.

In total, the company produced 133 of them and a class win at Le Mans in 1965. Now, 24 brand new serial numbers are set to arrive.

In 2020, the Bizzarrini name was revived. The new owner is Rezam Al-Roumi, Chairman of Pegasus brands and a former director and chair of Aston Martin Lagonda.

The Bizzarrini 5300 GT Corsa Revival is designed to recreate the classic with as much authenticity as possible. Starting with original blueprints, the new Bizzarrini builders went so far as to find the original suppliers to make sure the materials were right. Even the experts involved in the original project — those still available, anyway — consulted on the Revival cars.

Bizzarrini was so focused on originality that rather than formulate a new paint color or grab one from a catalog, the company copied the original. The Bizzarrini team tracked down an original panel from the Le Mans winner that had been stored out of the light since the 1960s. Then, they scanned it and used the result to create Rosso Corsa Bizzarrini 222, an exact color match.

Like in the 1960s, a 327 Chevrolet V8 will power the car. Bizzarrini calls it “a period-specific 5300 cubic centimeter V8,” for obvious marketing reasons. On the other hand, Giotto picked the 327 because he knew it was the ideal powerplant way back then.

Each of the 24 Bizzarrini 5300 GT Corsa Revival cars will be hand-built at a new facility in the UK. The lightweight body is a single piece, mounted over a steel frame.

Because Giotto Bizzarrini pushed high-tech solutions like fiberglass bodywork for his cars, the Revival will also come with a fiberglass body. But because the company believes he would have used carbon fiber had the material existed at the time, carbon shell is also an option.

Picking the carbon bodywork means the car won’t be eligible for wheel-to-wheel racing under the FIA’s historic rules. Go for the standard fiberglass, though, and the car’s six-point roll bar and safety fuel cell — both updates since 1965 — will meet the FIA’s Appendix K rules. That means it could match up against its period peers at events like the Goodwood Revival and battle like it’s 1965 all over again.

Pricing for the Bizzarrini 5300 GT Corsa Revival starts from around £1.65 million, or $2.2 million in greenbacks. Bizzarrini will let you customize the car thoroughly, so prices will climb quickly from there.

“The car is of course engineered for racing,” said Bizzarrini COO Richard Quinlan. “But we will also be able to satisfy the desire of any customer who wishes to drive this spectacular car on the road.”

The automaker expects to hand over the first cars to customers in May.


Koenigsegg Agera XS Is The First Koenigsegg In The US And We...
10 Of The Best Mitsubishi Cars Ever Made
2021 BMW M3 Competition: This Sports Sedan Still Rules the R...
Best of 2019 Alfa Romeo
Lamborghini Huracan Charges Through 20k Sales, Is Top-Sellin...
10 Cool Sports Cars That Will Rock Your World