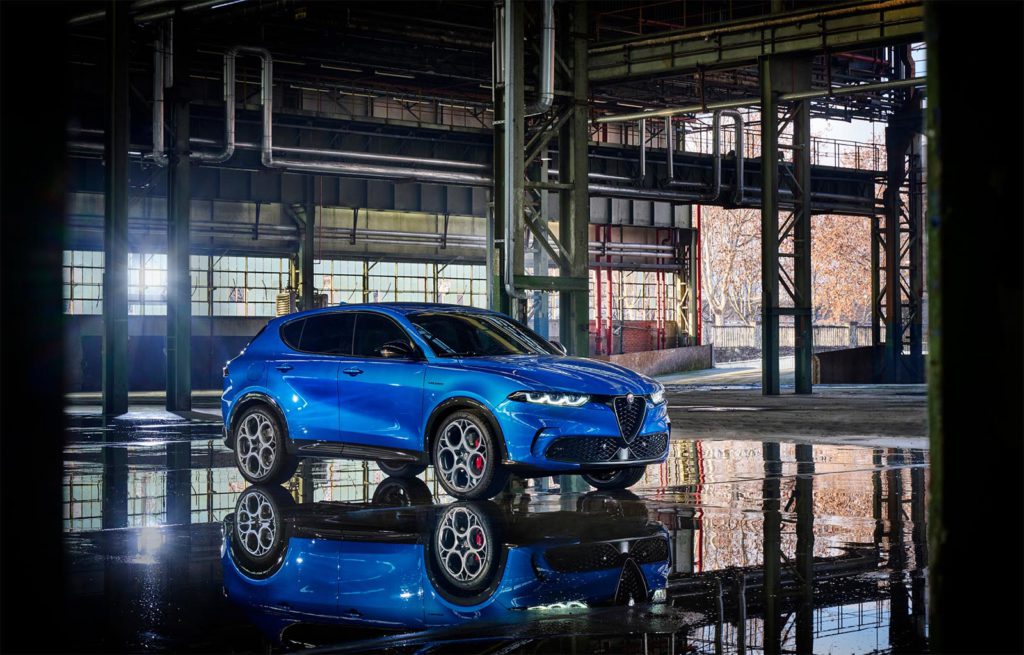 “Good things come to those who wait,” or so the old maxim goes. If that proves true, the new Tonale SUV should be the model that Alfa Romeo fans have long hoped for.

Joining the automaker’s European line-up by mid-year and reaching U.S showrooms about 6-months later, the Alfa Romeo Tonale is running a full year behind its originally scheduled rollout. Better late than never, it sets in motion “La Metamorfosi,” or “the metamorphosis.” Alfa’s momentum towards an all-electric future, it says by 2027.

While the marque’s first battery-electric vehicle (BEV) is still several years away from production, the 2023 Tonale will be Alfa’s first model to offer a plug-in hybrid (PHEV) option – along with two conventional hybrid packages that won’t come to the U.S. market.

Tonale could be the real make-it-or-break-it model for Alfa, a brand that has struggled to live up to expectations after returning to the U.S. in 2015, after a two-decade absence. It has struggled to live up to the plan laid out by former Fiat Chrysler CEO Sergio Marchionne and must now prove it has a reason to survive as one of the 14 brands owned by newly formed Stellantis.

The Tonale is meant to “respect the Tonale concept you saw in Geneva” in 2019, and it must respect expectations with the highest levels of quality and customer satisfaction,” said Alfa’s global CEO Jean-Philippe Imperato. “It has to be different from all the other brands,” he added, in a crowded market for compact luxury SUVs. 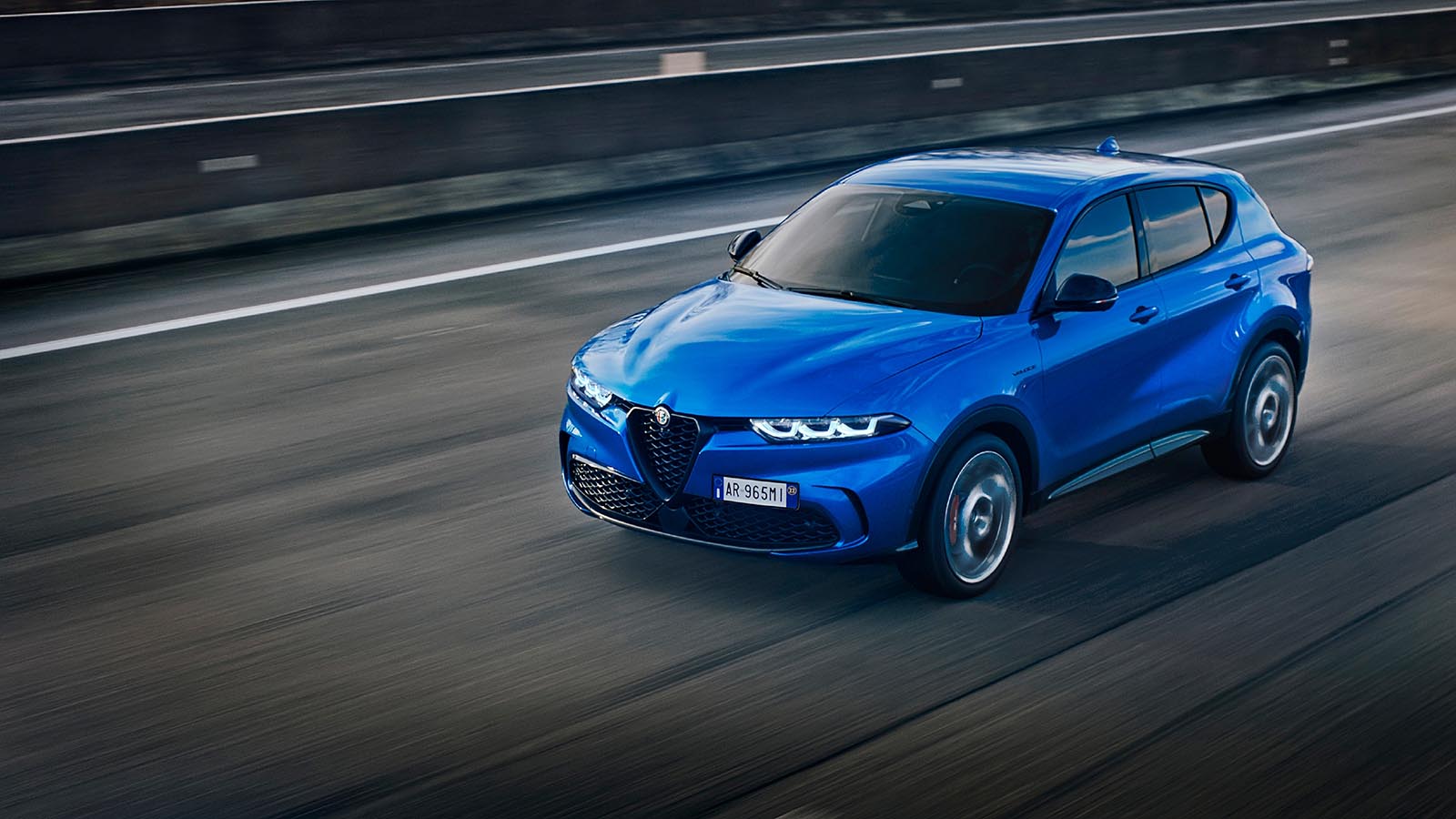 The basic underpinnings of the Tonale are shared with the latest generation Jeep Compass though they have gone through a “strong evolution,” said Domenico Bagnasco, Alfa’s overseer of high-performance vehicles, during a media backgrounder. It has a wider track, a new suspension – McPherson struts front and back – and a revised steering system, to start with.

The plug-in hybrid system has been significantly revised, as well, in order to deliver the sort of power and sportiness one would expect of the Alfa brand. And that, according to insiders, was one of the key reasons the project was delayed – though like so many other brands, Alfa had to work around the global shortage of semiconductor chips, as well. 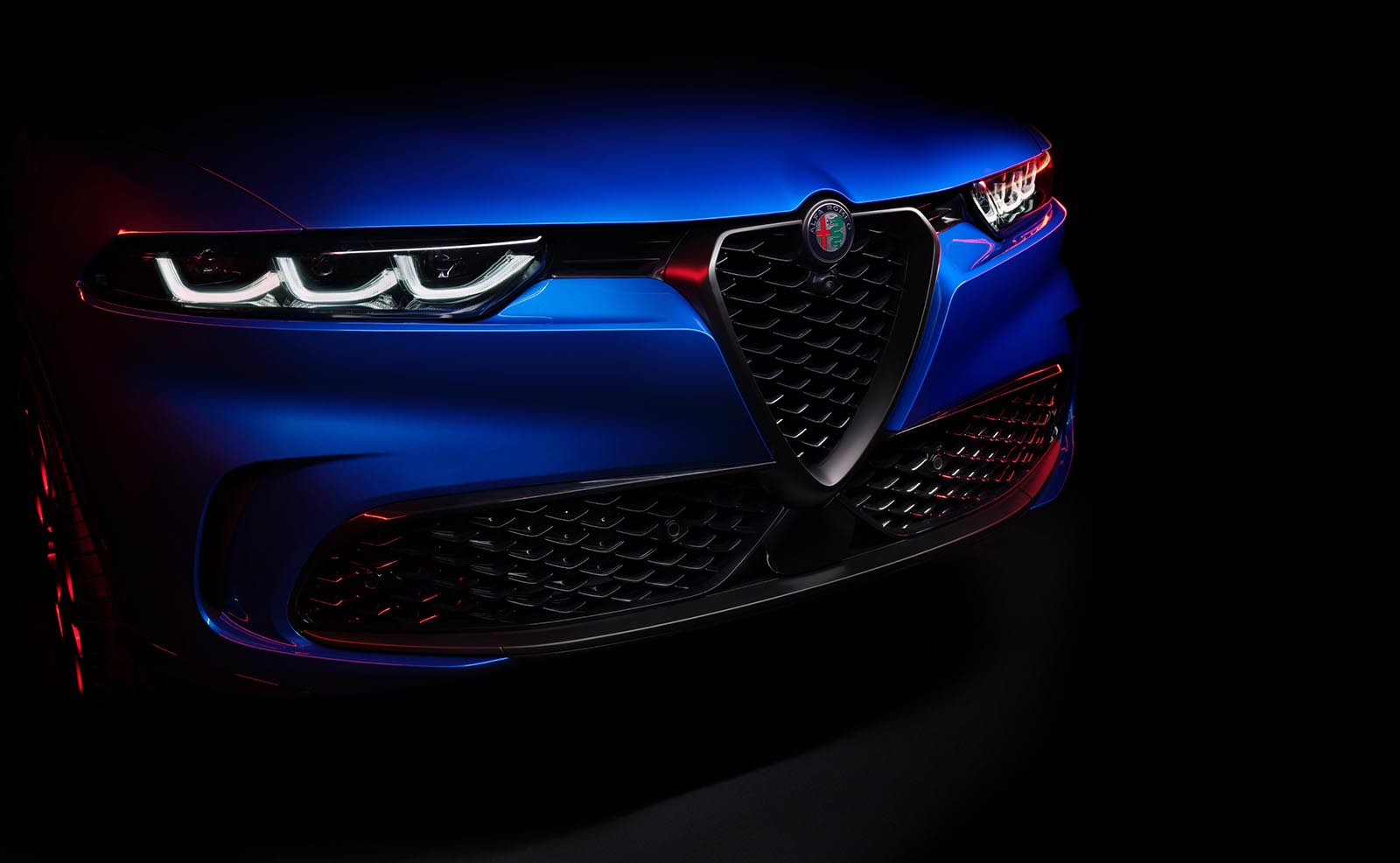 While they share roughly the same exterior dimensions, there’s little else that will lead you to confuse the Tonale and Compass. The Alfa picks up the brand’s distinctive “Trilobo” grille, with a large, secondary air intake below the front bumper. The triangular grille is framed by Alfa’s “3+3” LED headlamps, a design repeated in back, the taillights linked by a light bar just below the integrated tail spoiler. The coupe-like roofline is mirrored by an arcing accent line on deeply sculpted door panels.  And the steeply raked front and rear glass accentuate Tonale’s sporty feel, as do 19 and 20-inch wheels and tires.

Tonale’s wide track allows for a cabin that is wider than its compact looks might suggest. “The priority was to put the driver at the center,” said design chief Alessandro Maccolini, the infotainment system and climate and audio controls angling inward. 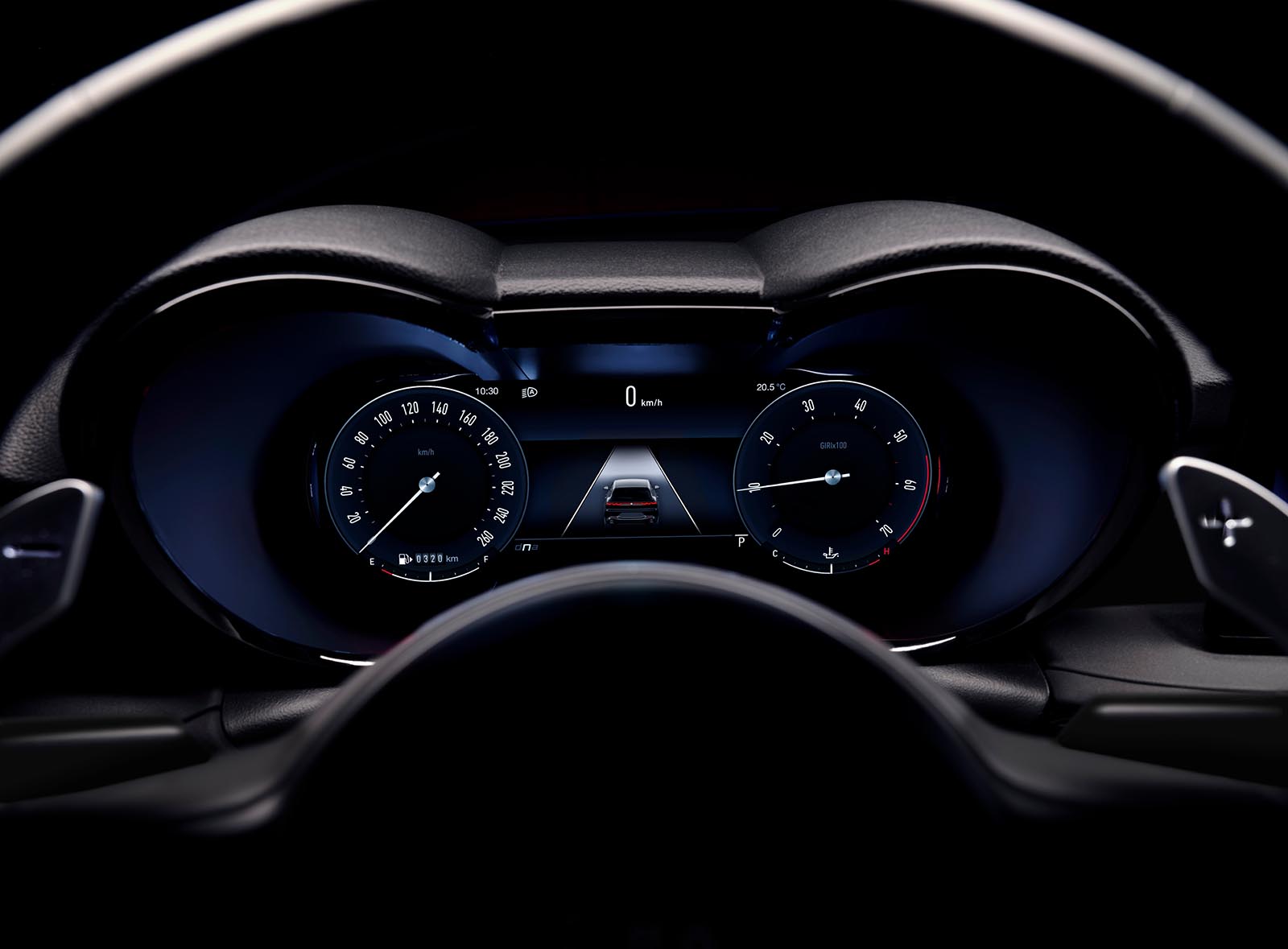 The digital gauge cluster, he suggested, was influenced by Alfa’s long-running motorsports program, but there’s a bit of racing history to the entire interior design. The reconfigurable 12.3-inch display is paired with a 10.25-inch touchscreen using the latest Uconnect 5 operating system. It’s significantly faster than the display in Alfa’s earlier models, the Giulia sedan and Stelvio SUV, and higher resolution. 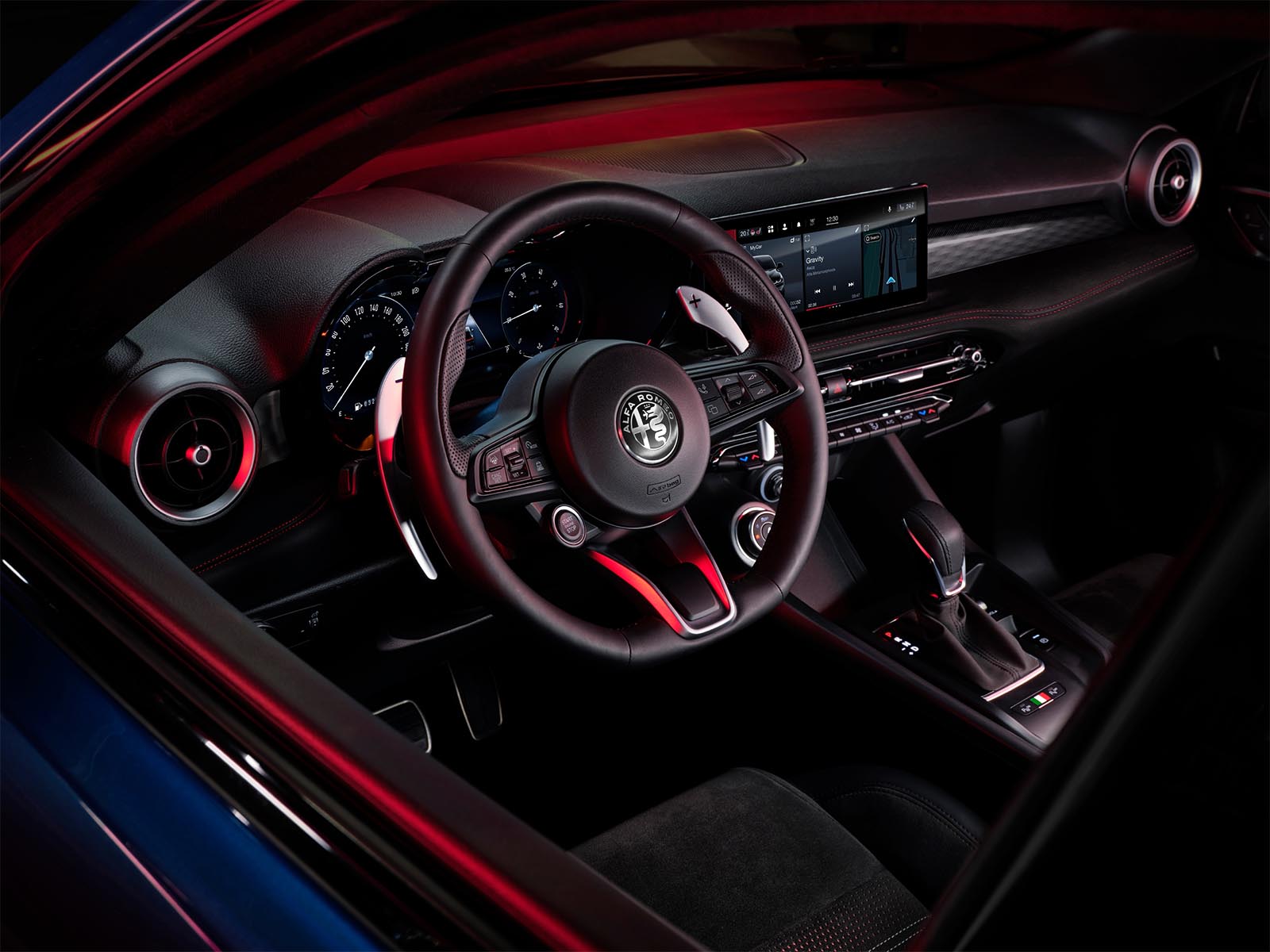 While the Tonale might be the new “entry” model in the Alfa line-up, it’s also going to be the brand’s most technologically sophisticated offering. It features wireless versions of Apple CarPlay and Android Auto, as well as wireless smartphone charging. Smartphone-style over-the-updates will enable Alfa to remotely update software and even add new features, including subscription services parent Stellantis is developing.

The Tonale will be Alfa’s first model to incorporate Amazon’s Alexa voice assistant, which will let a driver control numerous vehicle functions by voice. That technology also lets a driver connect with the vehicle remotely by using either Alexa or Google Home devices. 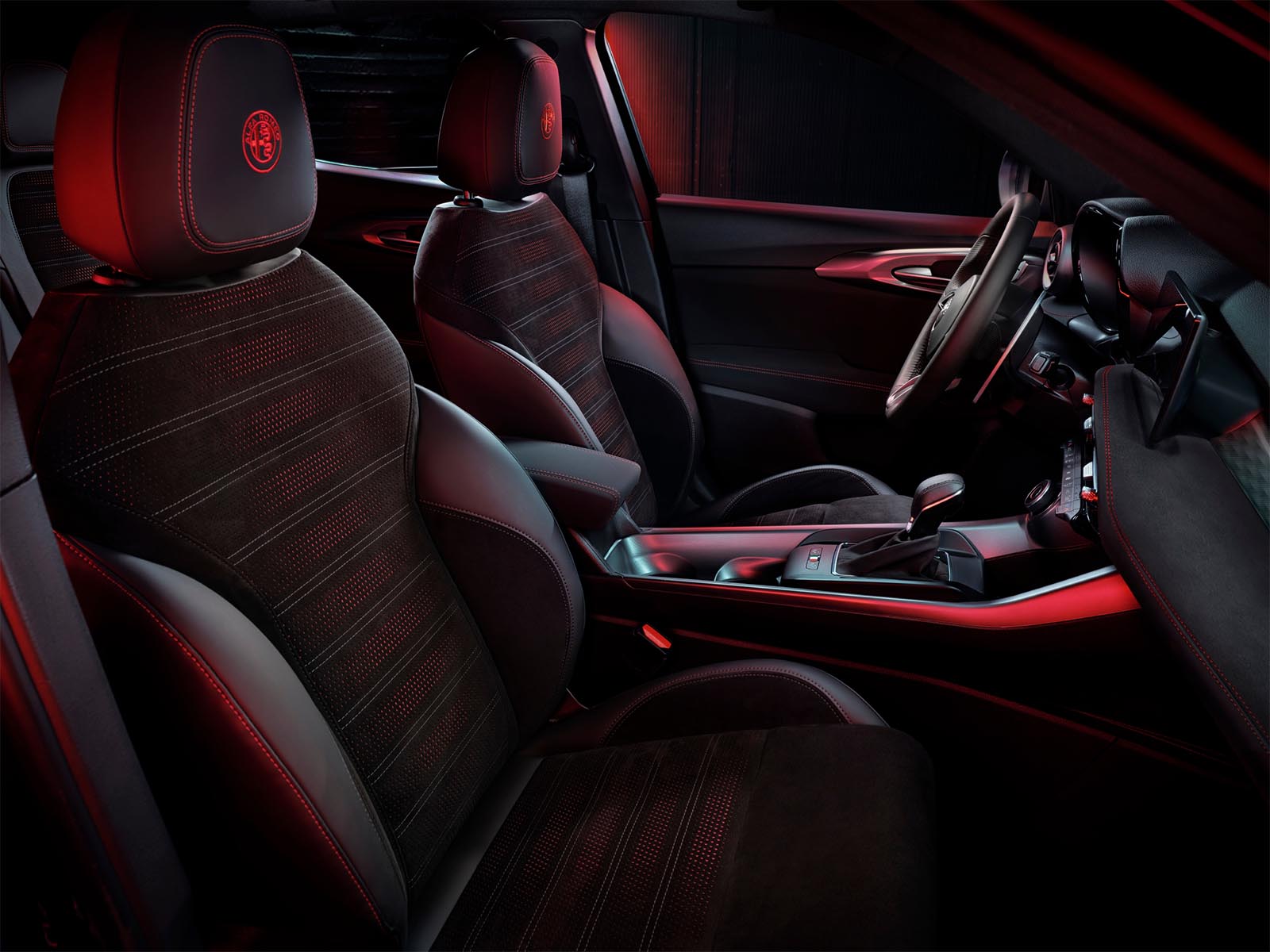 The big news on the technology front, however, can be found under the hood.

European versions of Tonale will be offered with a choice of two different hybrid powertrains. Both use a 1.5-liter GDI gas engine paired with a 48-volt electric motor assist system. The base package makes 130 hp and the upgrade 160. Neither hybrid will come to the U.S., Alfa officials acknowledged, because they simply won’t meet American performance expectations.

That’s where the plug-in hybrid comes in. It features a 1.3-liter turbo-4 gas engine paired with a 90-kilowatt electric motor and a 6-speed automatic transmission. The combined output is 272 hp, making this the most powerful version of the new Tonale. And the 15.5-kilowatt-hour lithium-ion battery is expected to deliver about 30 miles of all-electric range. 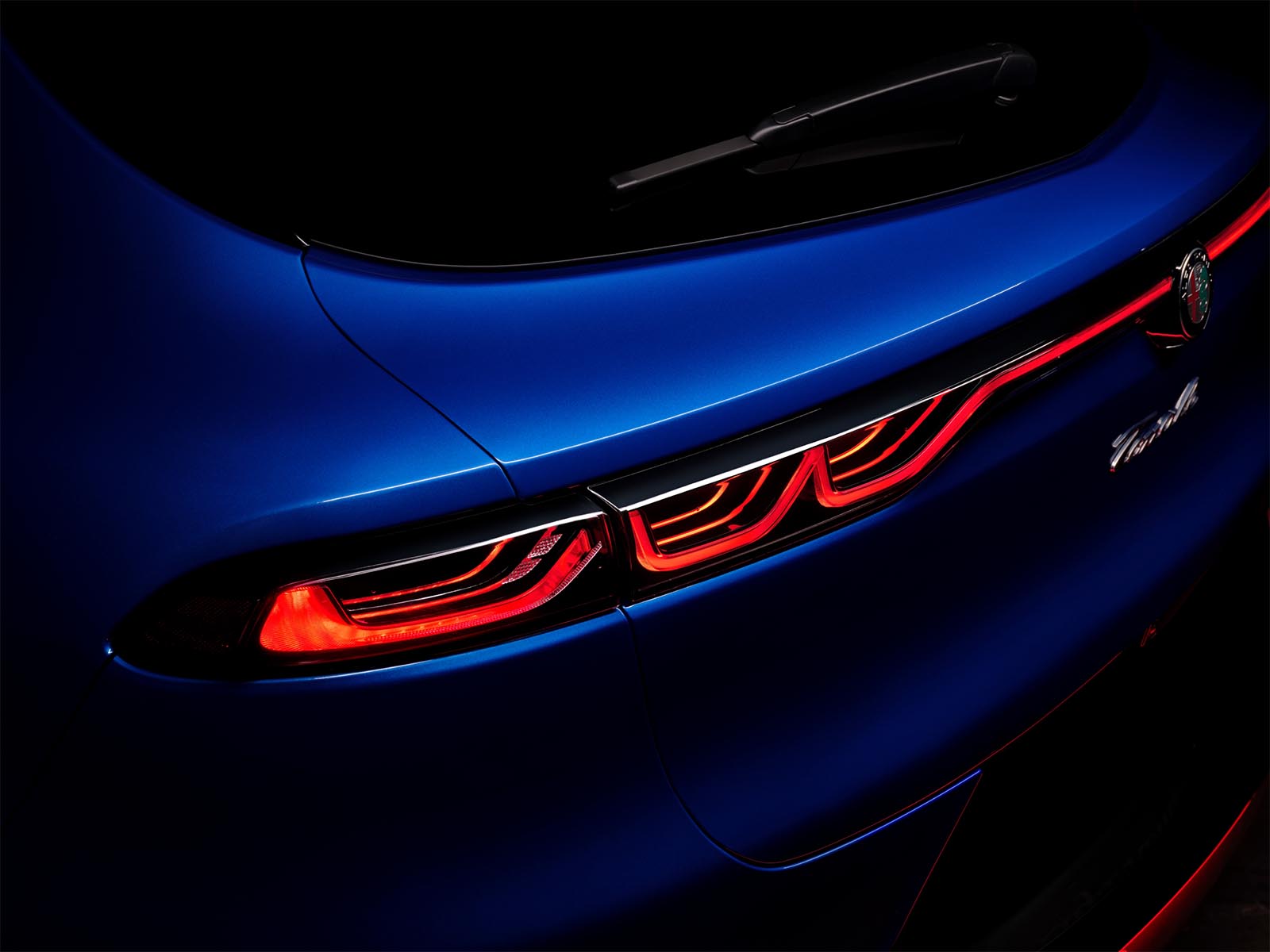 For those who want a more conventional drivetrain package, a diesel will be offered in Europe. Americans will get a gas-powered option using a 2.0-liter turbo-4 punching out 256 hp and 295 lb.-ft. of torque. It will be mated to a 9-speed automatic.

Both U.S. powertrain options will be offered only in all-wheel-drive. In Europe and other markets, however, the Alfa Romeo Tonale will be available in both front and AWD. 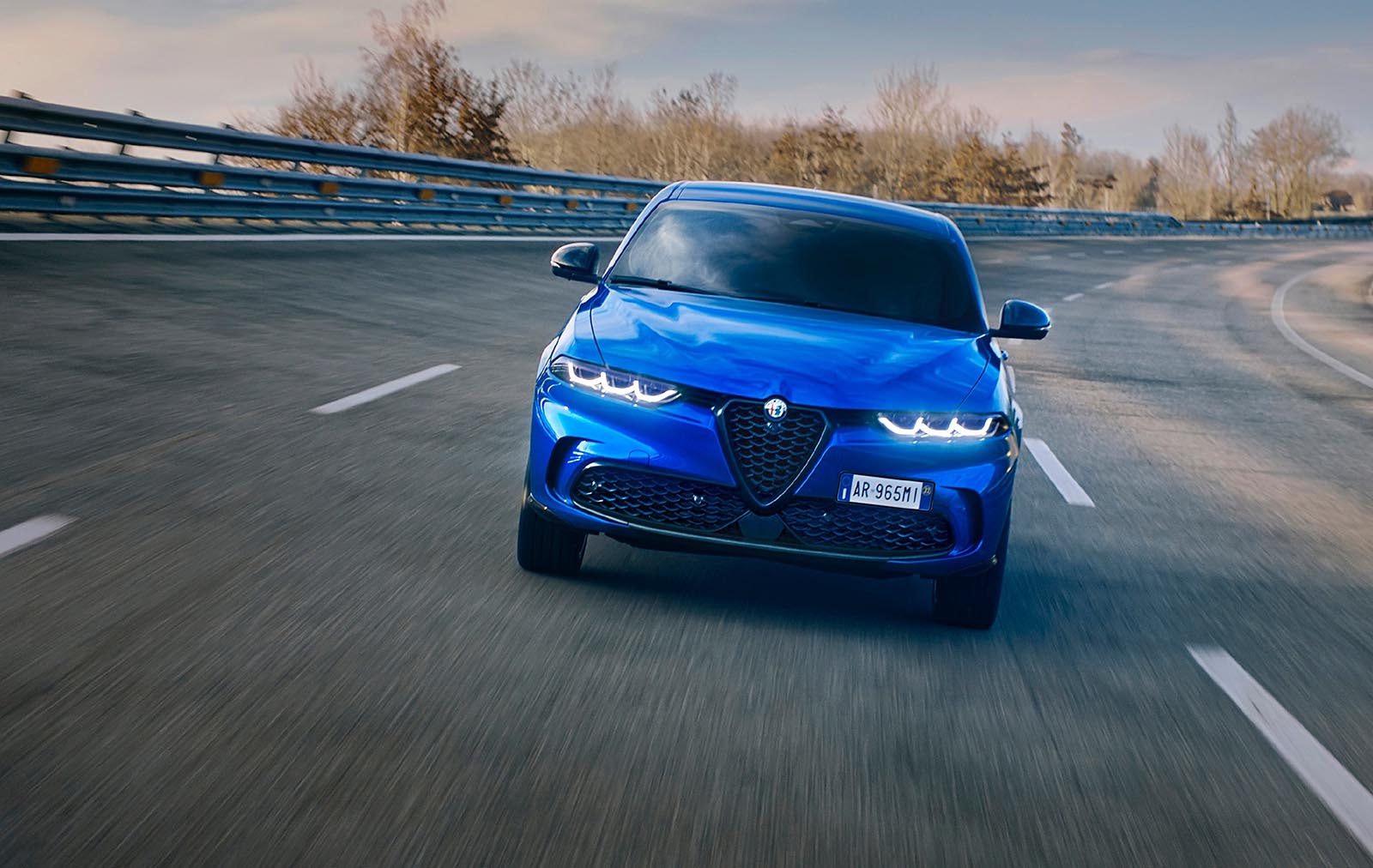 The 2023 Alfa Romeo Tonale will reach European showrooms by mid-2022, with American motorists having to hold tight until the first quarter of 2023. Pricing hasn’t been revealed but is expected to start at around $36,000 – a figure that could jump by next year considering the sharp run-up in new car pricing during the COVID pandemic.

Looking ahead, few would be surprised to see Tonale offered with an even more powerful package, though whether it would be badged Quadrifoglio – like the ultimate Giulia and Stelvio models – remains to be seen.

It’s also unclear if a pure electric model is in the works. What Alfa officials did confirm during their media backgrounder was that the end is near for Alfa’s gas and diesel powertrains.

In 2024 it will launch a new vehicle available in both gas-electric and pure battery options. A year later, the first Alfa offered exclusively as a battery-electric vehicle will make its debut. And by 2027, all products using internal combustion engines will be abandoned, Alfa going 100% electric. 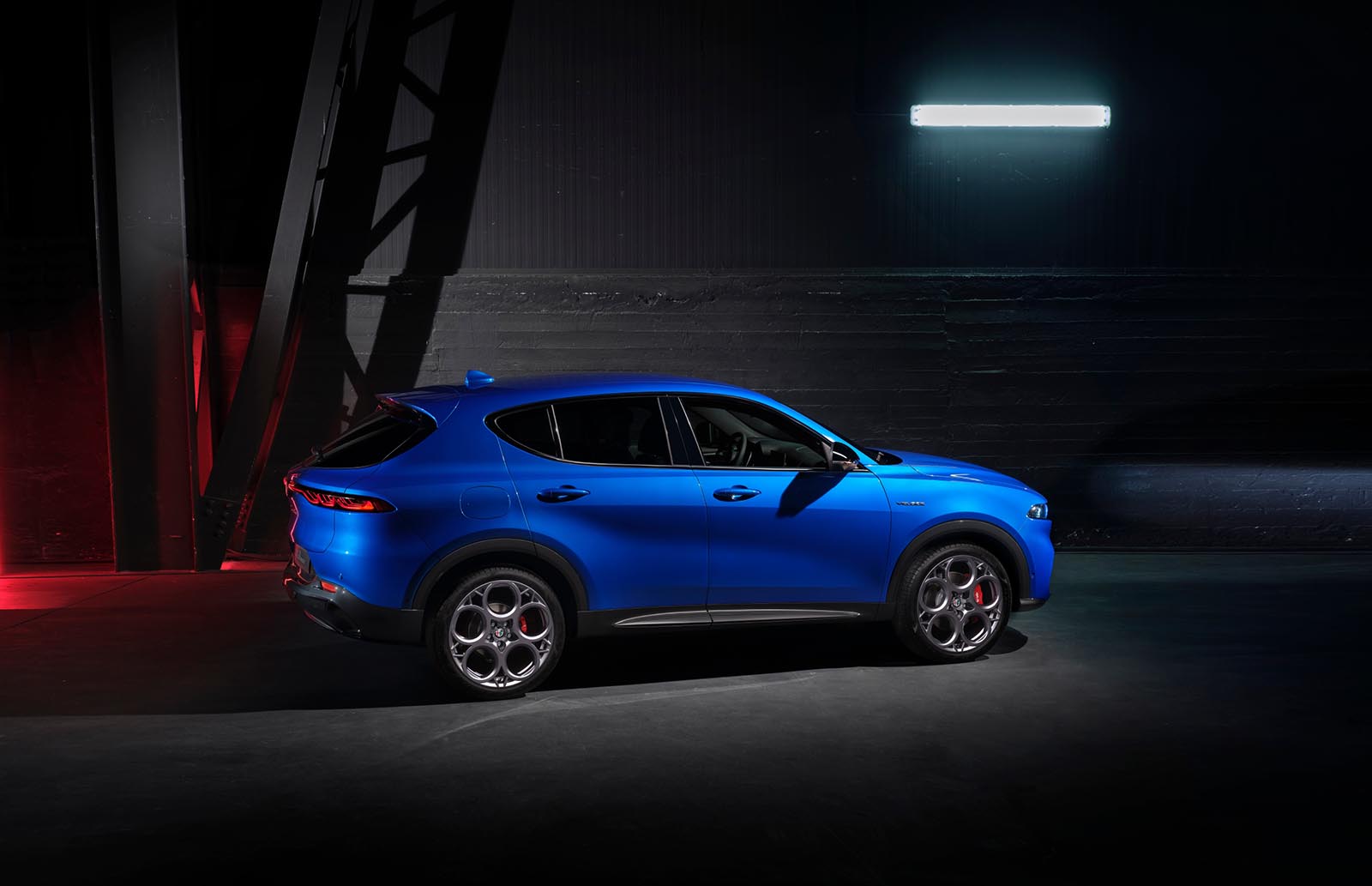 
The 10 Most Exciting 4-Cylinder SUVs on the Market
The Best 2020 Alfa Romeo Models
Koenigsegg Agera RS Naraya With A Gold & Diamond Touch
10 Sub-$10K Cars That Could Get You Laid
Pontiac GTO Aztek Shaker - Would You?
12 of the Best Sporty SUVs Ever Created