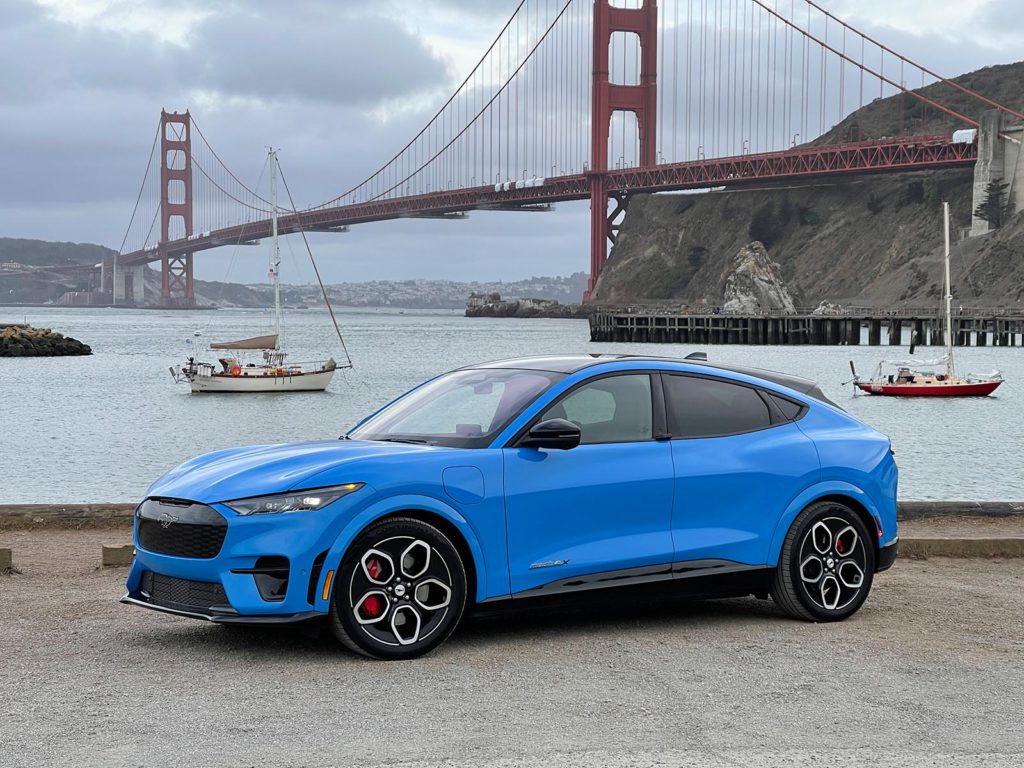 For those who still think a Mustang can’t be an SUV – and certainly not all-electric – Ford’s latest battery-powered offering is going to shake them down to the foundation. The 2022 Mustang Mach-E GT takes last year’s Mustang Mach-E to a new level of performance and handling, while giving Tesla fanboys another reason to worry.

Set to reach showrooms this autumn, the Mach-E GT boosts the original electric crossover’s pony count to 480 – in line with the V-8 powered Mustang GT coupe. But it also punches torque up to as much as 634 pound-feet with the optional Performance Edition. And that puts the all-electric offering more on par with the Mustang Shelby GT500.

With its battery pack and motors mounted below the floorboards, you’re likely to forget the heft of the new Mach-E GT – as I did while flogging it through the steep hills and tight turns heading north along the Pacific Coast Highway from San Francisco out to scenic Point Reyes this past week.

True, the electric crossover might not offer the guttural roar of Ford’s classic 5.0-liter V-8, but it has plenty of other compelling features that suggest the future of high-performance driving really is going all-electric. 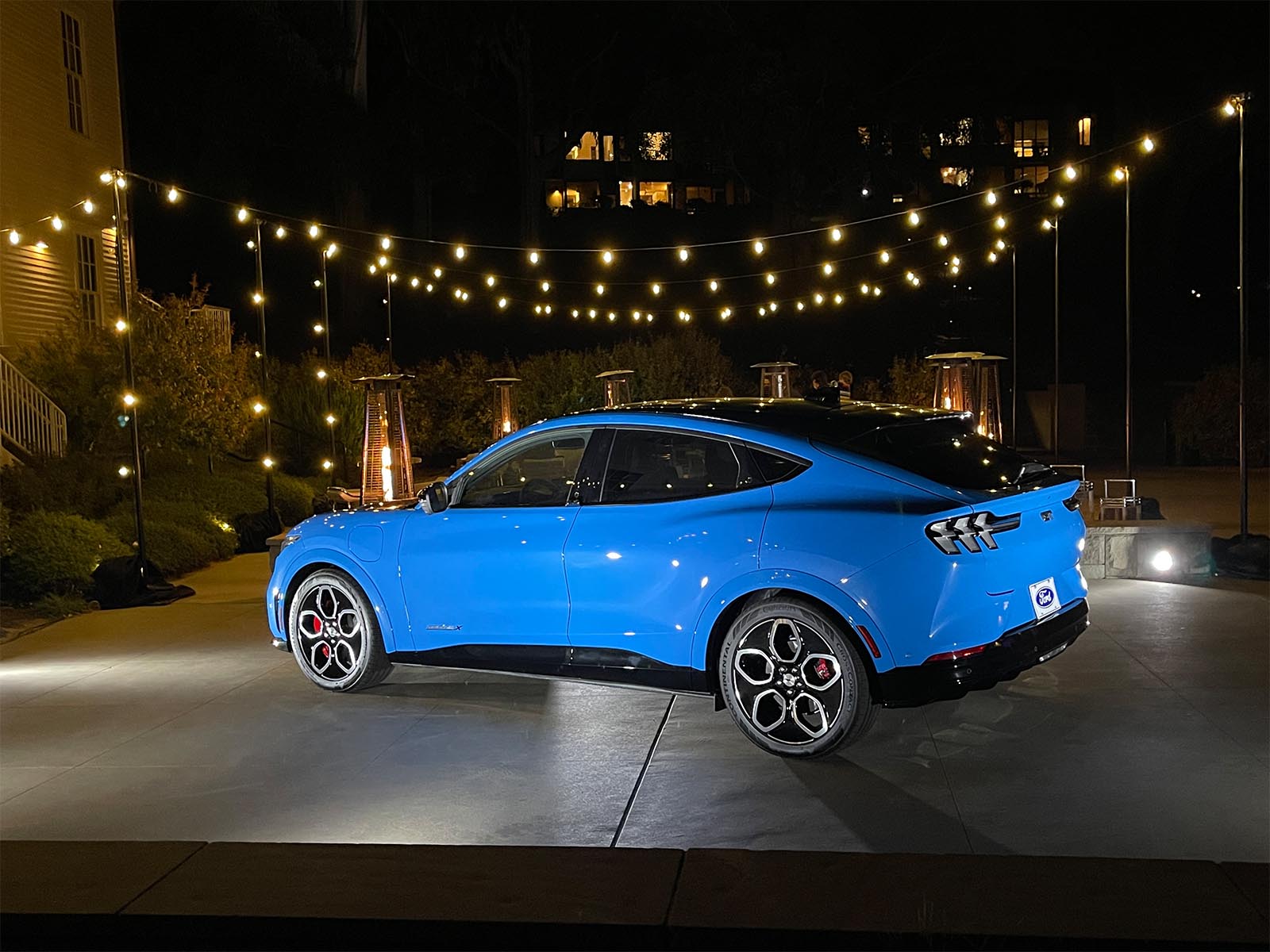 Ford was an early electric vehicle pioneer, with offerings such as the C-Max and Focus EV. But, with their sluggish performance and limited range, they gained relatively little traction. The first two Mach-E models changed the equation, offering solid acceleration and up to 300 miles per charge. That was enough to win the battery-electric vehicle kudos as 2021 North American SUV of the Year, among other honors.

It’s not that the original versions of the Mach-E were stone ponies. Far from it, as they delivered up to 346 hp and 428 lb.-ft. of torque. The Mach-E GT takes things to a new level. It now gets two identical motors, one on each axle, producing a combined 358 kilowatts – or 480 hp – and 600 lb.-ft. of torque. That will get you to 60 in just 3.8 seconds, while the Performance Edition, with an additional 34 lb.-ft. of torque, cuts the launch time down to 3.5 seconds.

The numbers don’t quite tell the whole story. Torque comes on instantaneously with electric motors. Feed them enough current and the impact is visceral. Mashing the Performance Edition’s throttle seemed to rejig my circulatory system, blood flowing from the front of my body to the back and creating what I can best describe as an exhilarating panic.

With a single-speed transmission, that acceleration didn’t begin to let up until I was approaching triple digits. Later, when driving on U.S. 101 through Marin, the GT effortlessly provided all the muscle I needed to execute quick passes.

These days, it seems like comparisons to Tesla are a requisite for any EV review. The GT Performance Edition is likely to take the Model Y Performance package by about a tenth of a second at the 60 mph mark. 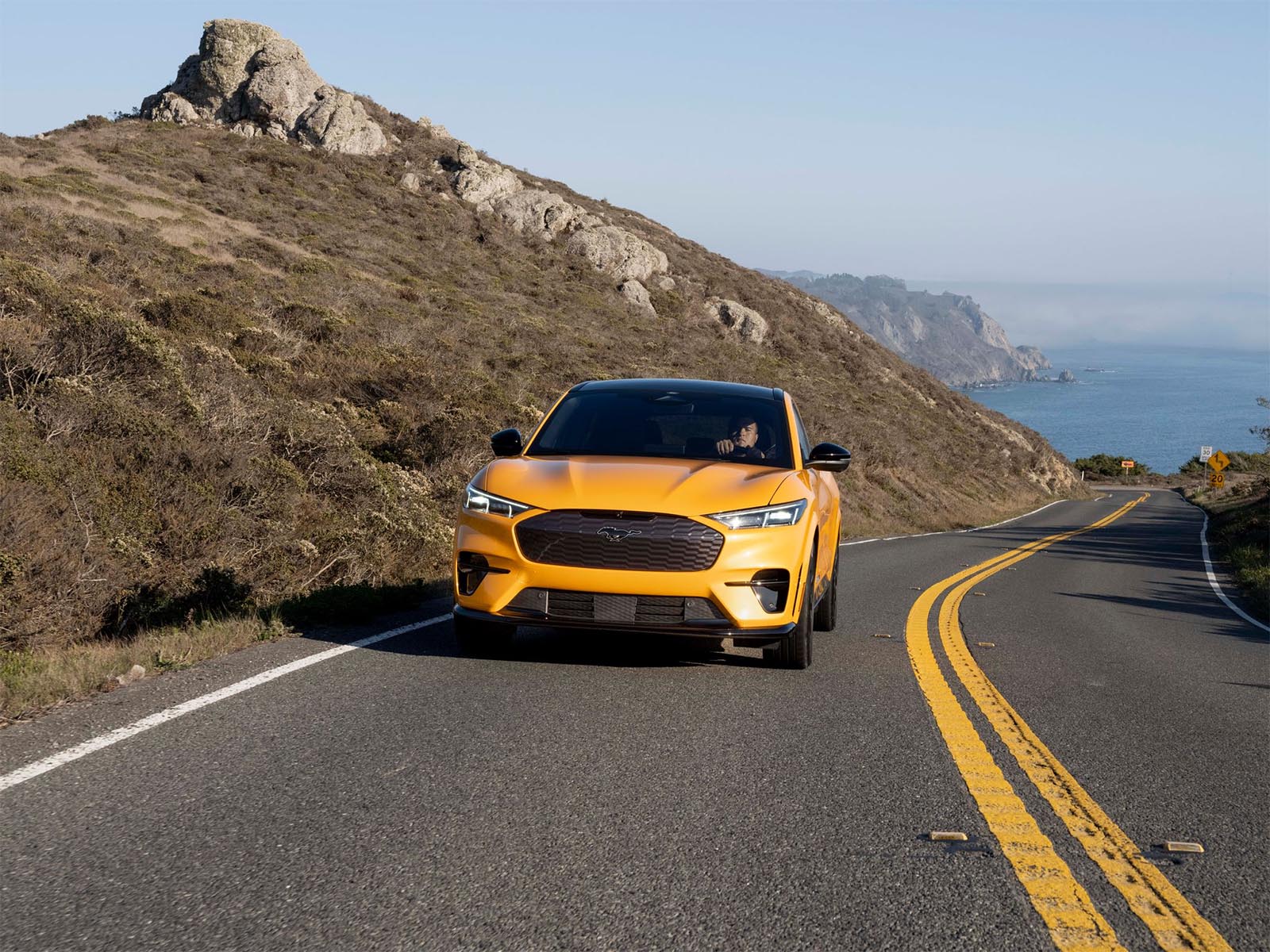 From a visual perspective, there’s no comparison, at least not to my eyes between the Model Y and Mach-E. The Mustang Mach-E is a much more striking and well-executed package, especially from the rear, where the Tesla SUV is just plain ungainly.

The Mach-E GT gets a number of distinctive design cues to set it apart from the more mainstream Mustang electric. The most significant is the new grille. As with the base models, it’s really just part of the fascia, as there’s no need to send air into what is no longer an engine compartment. But the GT adds a textured, carbon-gray honeycomb pattern that is more distinctive and menacing. It’s accented by a new, backlit version of the classic Mustang pony ornament. Below the bumper, twin intakes do send cooling air to the battery pack and motors – which can work up plenty of heat when you’re driving hard.

From the back end, the GT gets an enhanced diffuser and new badging, while a side profile reveals air curtains for the front wheels, blackened wheel arches, and rocker panels, as well as the fact that the GT rides almost a half-inch lower than the base Mach-E models.

Look at the new wheels and tires and you see “one of the enablers” allowing the Mach-E to drive like the GT version of the classic Mustang coupe, says Dave Pericak, a veteran Ford performance director. The battery-electric model rides on 20-inch wheels and tires, and they’re an inch wider than those on the earlier models.

GT: Taking Things Up a Notch 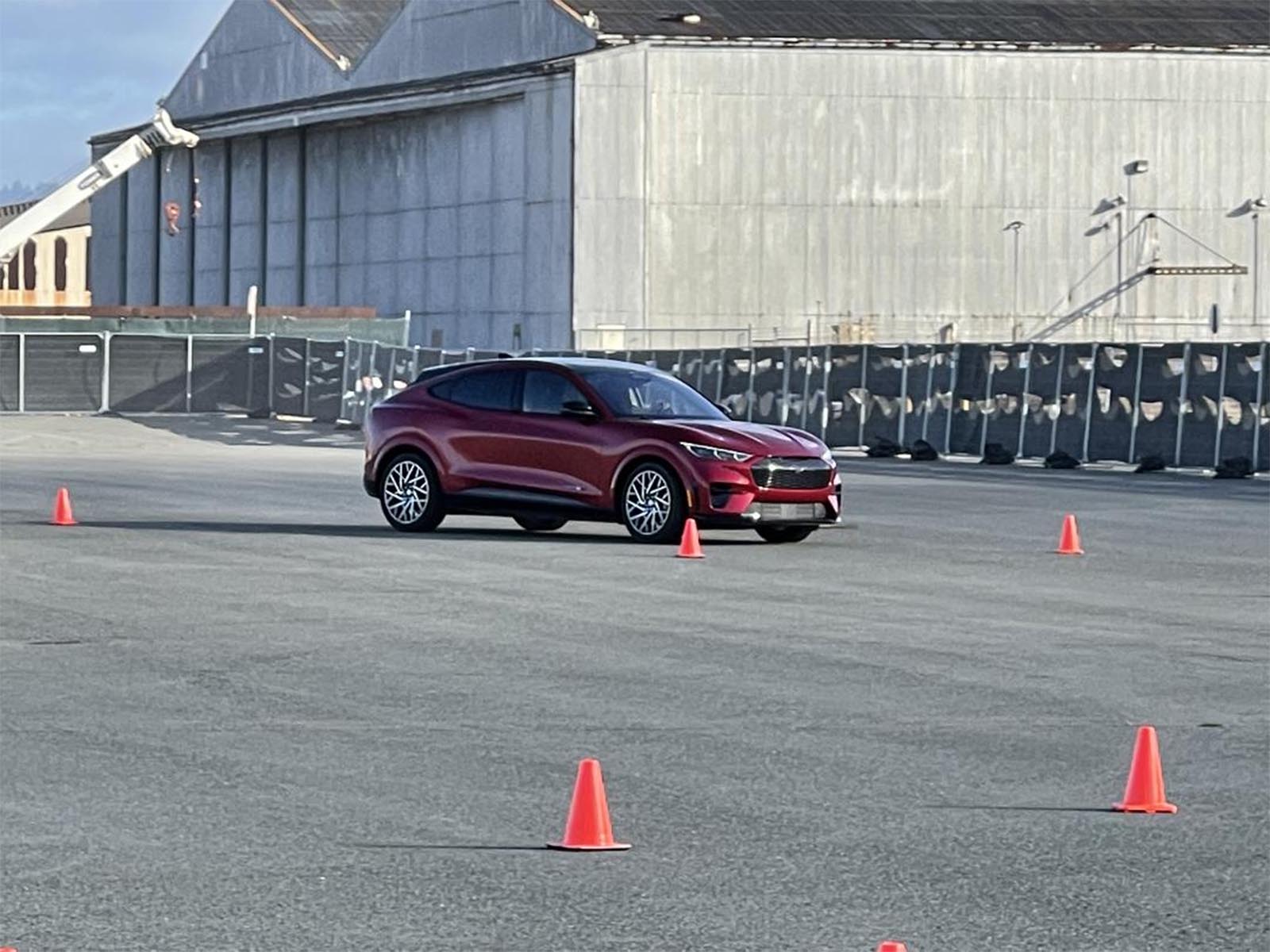 The sportier model adds another feature that should win over those looking to log track time or just some serious moves out on the street. It trades off its conventional damping for a Magneride system. Without diving too deep into the underlying science, electromagnets change the way the fluid used in the dampers can flow. And it all happens quickly – dampers can go anywhere from soft to hard as a rock in the time it takes to travel about two inches at 60 mph.

Since each shock can be adjusted individually, the system can help improve cornering, as well as overall road feel. That became clear driving at speed along Grizzly Peak Road, a delightful autocross-style route through the hills outside Oakland, CA.

Mach-E GT: A Look Inside 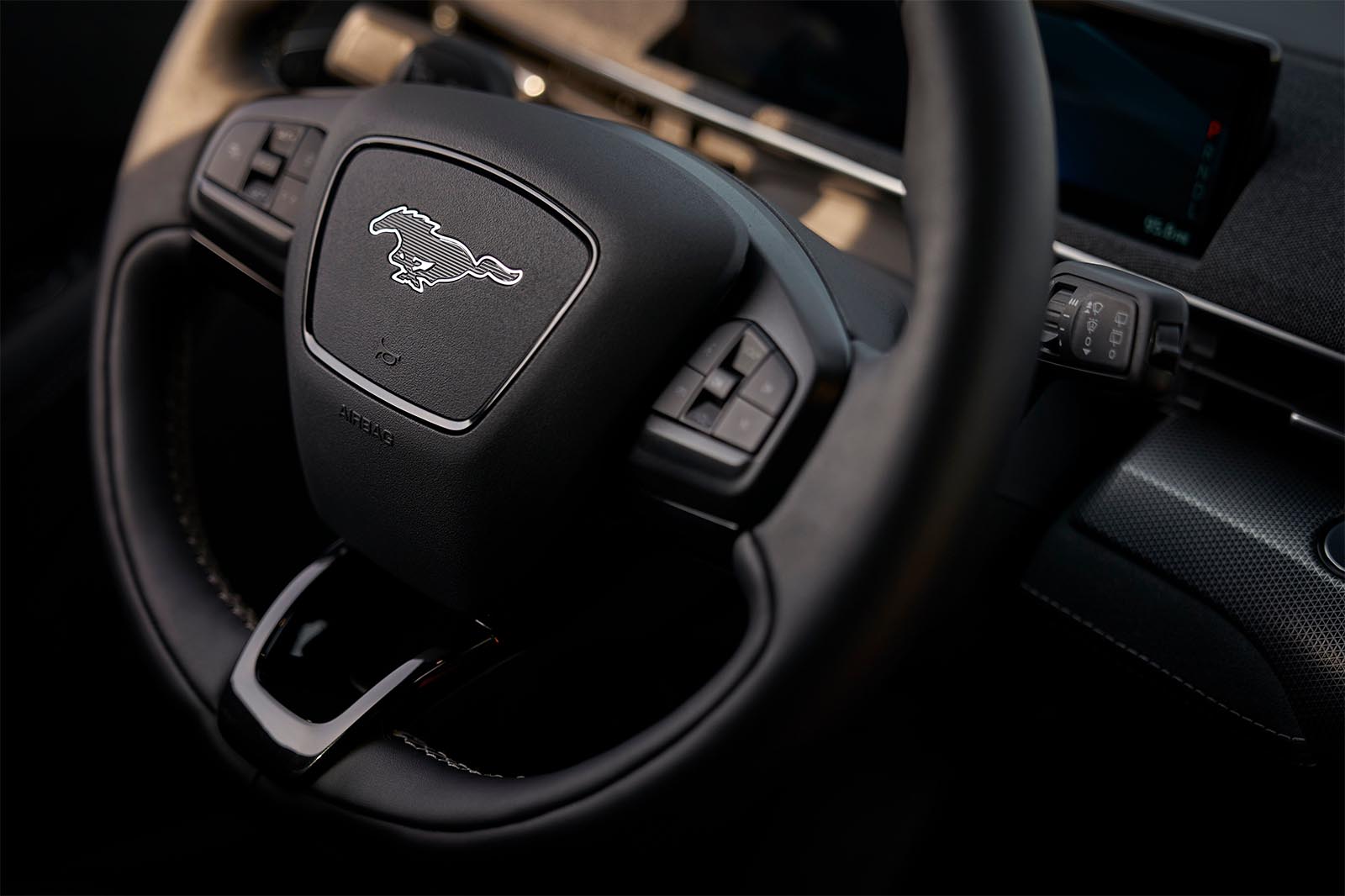 Among the other features justifying a nearly $6,000 premium for the Performance Edition, Ford adds on some well-bolstered seats that keep you firmly in place during even the most aggressive driving maneuvers. Both GT variants get new interior badging, suede accents, and copper stitching.

The overall cabin appearance of the GT isn’t much different from the base Mustang Mach-E – which isn’t a bad thing. The appearance is handsome, yet minimalist. A floating digital gauge cluster rides just behind the steering wheel. A vertically oriented 15.5-inch touchscreen, meanwhile, sits atop the center console and handles the vast majority of vehicle functions.

The display uses a special version of Ford’s Sync 4 operating system, here getting features useful for an EV owner. Among other things, its navigation package can be set up to guide you to charging points along your route so you’ve always ensured enough power. You also can use the system to operate various vehicle functions remotely, such as setting the time you want to begin charging – or pre-heating or cooling your cabin while you’re still plugged into a charger. 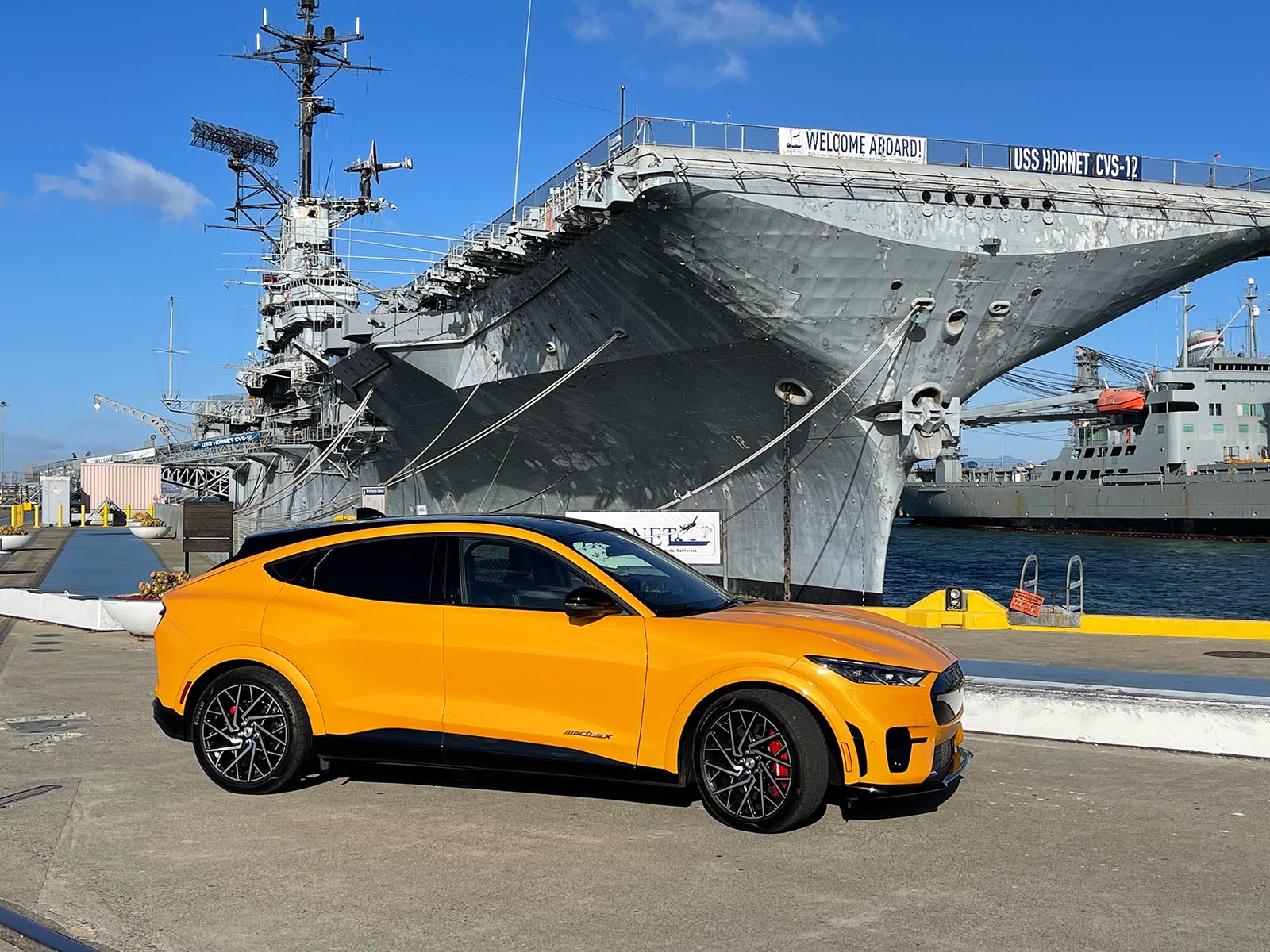 Ford claims to have the largest vehicle charging network in the U.S., with owners able to plug in at 19,500 stations operating 63,000 plugs. Owners will be able to “Plug & Charge” at ports operated by Electrify America. That means billing will be handled automatically once the charger and vehicle are connected.

As for range, the GT does sacrifice a bit for the added performance. It still manages a reasonable 270 miles between charges, the Performance Edition dropping to 260.

EV owners today do the vast majority of their charging at home. That’s not expected to change, even as more public chargers become available. The base charger offered with the GT will let a driver add 20 miles an hour from a 240-volt line. The upgraded Ford Connected Charger bumps that up to 28 miles per hour.

All versions of the Mach-E can also plug into public DC quick chargers. 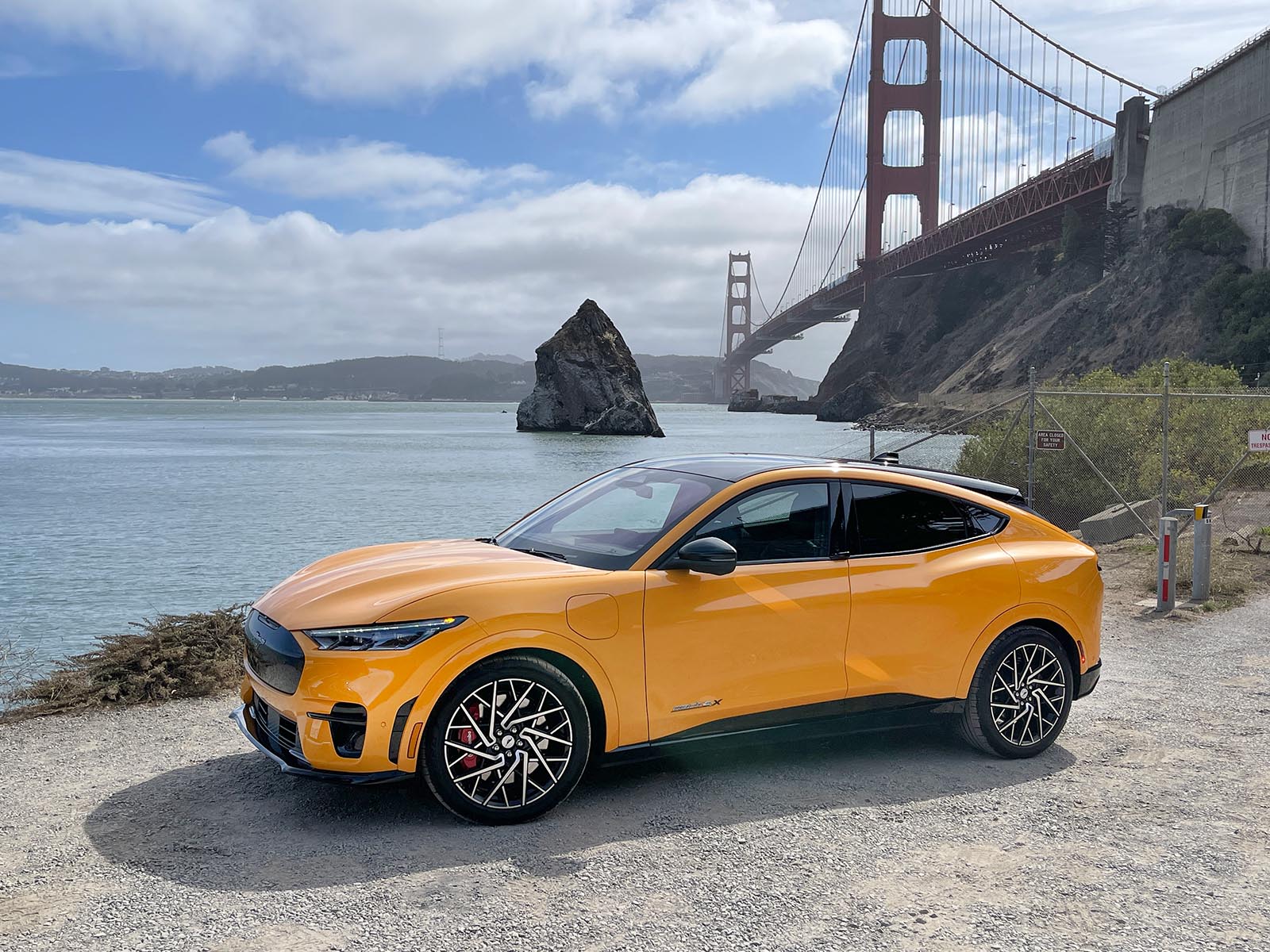 As has become an industry norm these days, all versions of the Mustang Mach-E offer driver-selectable operating modes. These include Whisper, which Ford describes as “Seamless drive, calm and quiet;” Engage, or “Balanced drive, fun and engaging;” and Unbridle, or “Exhilarating drive, machine and road align as one.” Each changes vehicle settings that include throttle responsiveness and steering, while also introducing subtle sounds to better connect driver and vehicle. And with the Performance Edition, that also modifies the responsiveness of the Magneride suspension.

The GTs get an additional option: Unbridled Extend. Essentially, it shaves just a wee bit off of peak acceleration but the trade-off is worth it. Run in standard Unbridled for more than about 10 minutes and the Mach-E’s drive control system will cut performance rather sharply to avoid overcooking the motors and battery pack. 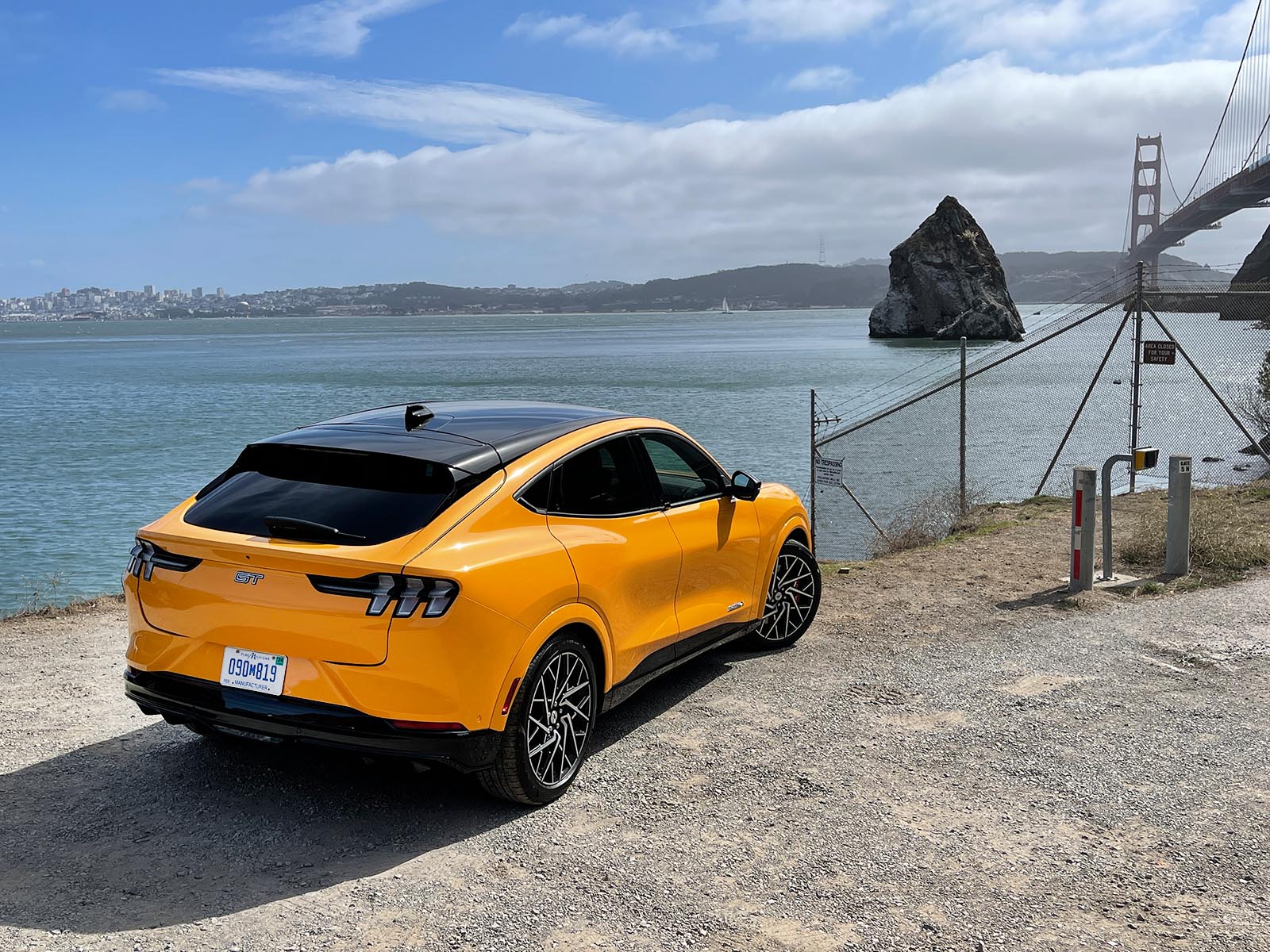 With the launch of the original Mustang Mach-E last year Ford showed it was serious about playing in the long-range battery-electric vehicle market. For anyone who didn’t get that message the first time, the new 2022 Mustang Mach-E GT should make it loud and clear.

With the added power and improved handling, the electric SUV proves it is more than worthy of wearing the Mustang badge. And it proves itself a seriously credible alternative to the Tesla Model Y.

The 2022 Ford Mustang Mach-E GT will reach U.S. showrooms later this fall at a starting price of $59,000 before delivery fees, with the Performance Edition bumping that to $64,900. Another key selling point: Ford buyers still qualify for up to $7,500 in federal tax credits unavailable to Tesla customers.

Orders have already begun for the various 2022 Mach-E models. Based on the response to the 2021 SUV, don’t be surprised if you have to wait a while to take delivery of the new GT.