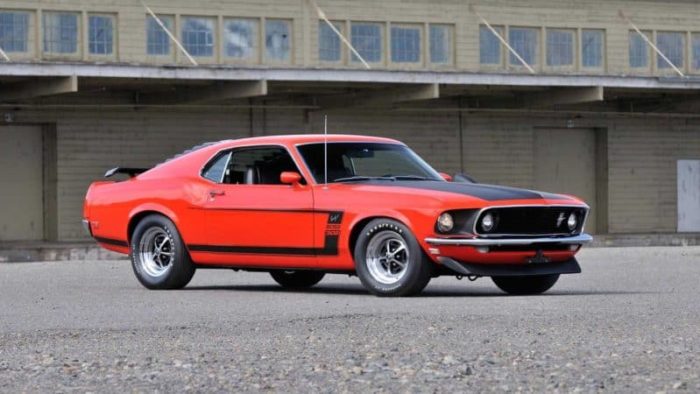 The most successful pony car of all time is still going strong after almost 55 years on the market. It’s survived numerous oil crises and a number of changes to both the emissions and safety regulations over the five and a half decades it’s been serving as a go-to attainable performance car. Being a dedicated performer, the Mustang’s had its share of great engines over the years. Whether these were V8’s, six, or even four-cylinders – it never really mattered much so long the Mustang kept on doing what it was supposed to. Here are our top 5 of all three Mustang engine configuration’s choices.

Blue Oval has built great many V8 engines over the last eight and a half decades or so, and many of them have put their talents to good use in all six generations of Mustangs. The Mustang/V8 link is as natural as they come considering both the car and the engine configuration have been built with performance in mind. The following top 5 V8 Mustang engines all stem from the nameplate’s most illustrious years – whether the golden era or modern ones.

The Mustang and 289 cu in Windsor V8 were a match made in heaven – especially the high-power Hi-Po version which served as the ultimate Mustang engine for the first few years prior to the larger FE and Cobra Jet’s arrival in ’68. The Hi-Po “K-code” 289 V8 made 271 hp thanks to a 4-barrel Autolite carburetor except in the early GT450 Shelby Mustangs where it delivered 306 ponies thanks to a larger Holley 715 cfm carb.

The “K-code” was a fairly expensive option at the time, but thankfully, the 200-hp “C-Code” 2-barrel and 225-hp “A-Code” 4-barrel options were fairly impressive in their own right. The 289 small-block’s biggest advantages were its light weight and simple design which made it easy to work on, and FoMoCo is still providing parts for it – decades after its discontinuation. 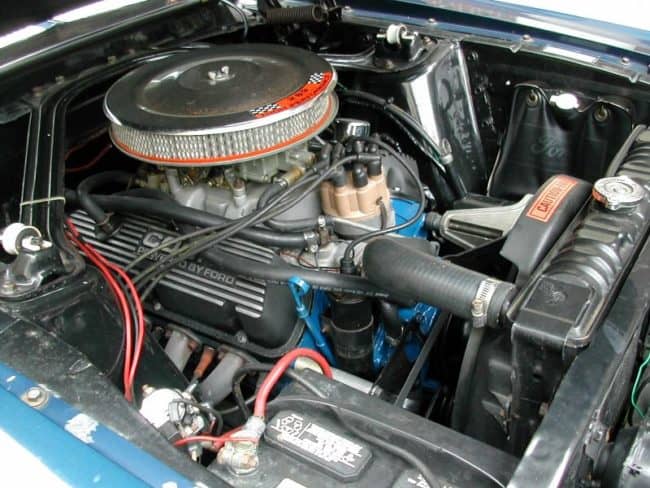 The 4.95L (marketed as the 5.0L) Windsor engine remained in production for four decades and saw the rise, death and resurrection of the muscle car scene. Although the Mustang’s early third-gen years were plagued by catalytic converters, low compression, oil embargos, and what not, the high output version which arrived in 1982 marked the return of the Mustang GT badge which opened the window for the next gen of performance cars.

In 1986, the venerable Windsor was rejuvenated by the introduction of electronic fuel injection. Purists were ready to commit collective suicide but the EFI HO Windsor proved to be a reliable and efficient, if not powerful V8 option. The engine and the Fox-body Mustang complemented each other rather well, and as far as new beginnings go, the EFI Windsor was as good as they come. 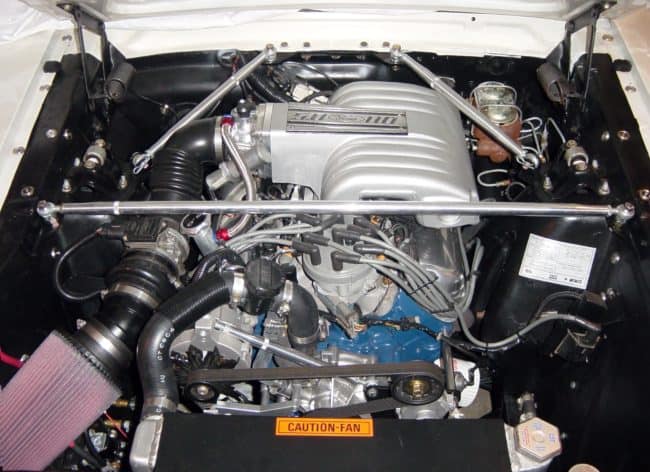 The Cobra Jet isn’t only one of the most legendary Mustang V8 engines, but one of the most important V8 mills Ford has ever produced. This iconic V8 was introduced as a response to the Chevy 427 cu in big-blocks and Mopar’s 426 cu in Hemi as the 427 FE “Medium Riser” wasn’t up to the task. FoMoCo produced over 20,000 of them by the time seventies came knocking, including the rare Super Cobra Jet which was intended for the Stock and Super Stock drag racing.

The 428 CJ was one of the most powerful mass-production street-legal engines money could buy back then, delivering 335 horsepower with the help from 735 cfm Holley 4-barrel carb. Factory numbers are one thing, but reality is something else as the engine actually made anywhere north of 400 horsepower. 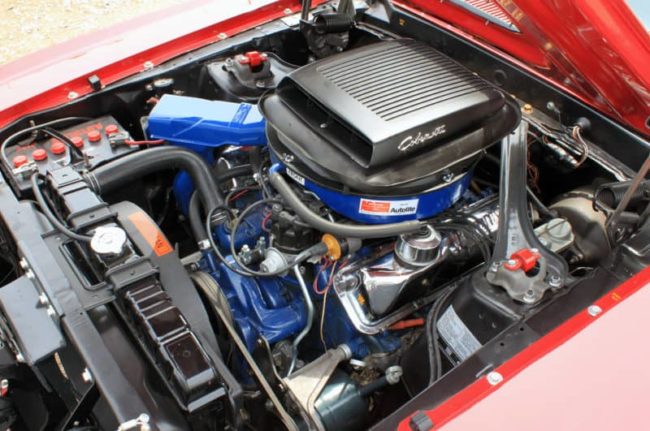 Unlike the larger 429 cu in Boss V8 which was intended for NASCAR racing, the more practical Boss 302 was aimed at Trans Am racing. It’s hard to separate it from the car which served to homologate the engine – the fabled Mustang Boss 302. The 5.oL engine itself was a combination of a Windsor engine block and new heads that would later become standard in the 351 cu in Cleveland V8’s.

It delivered maximum power and reliability by using a four-bolt main bearing block and forged steel crank which were also unheard of in previous Windsor V8 iterations. The Smallest of Boss powerplants breathed through a 780 cfm Holley 4-barrel carburetor and made 290 factory horsepower. In all likelihood, it actually produced around 350 hp. 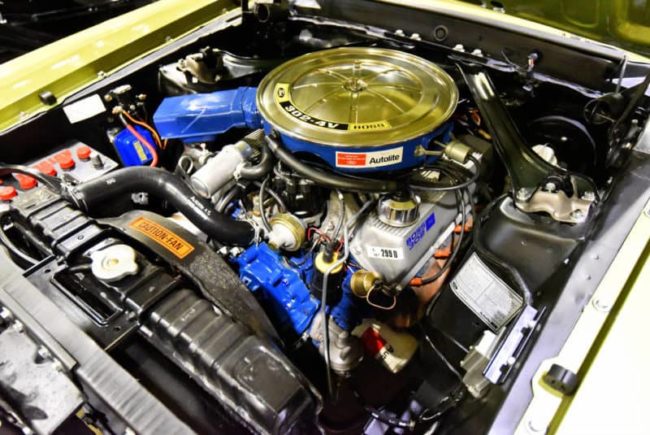 The modern Mustang GT wouldn’t be the car it is without the heart beating under its hood. That heart is the Blue Oval’s last modular engine design codenamed Coyote. Although a vast majority of praise goes to the flat-plane crank 5.2L Voodoo V8 which powers the modern interpretation of the Shelby GT350, that’s still only a variation of the Coyote mill.

The forthcoming Predator (Shelby GT500-exclusive) will be another variation of the v8 Mustang GT engine. The Coyote uses all the modern technology at its disposal in order to provide the right balance between performance, reliability, and price. 460 horsepower rarely come at $35,000 otherwise and the Coyote pretends to be remembered as one of the best -designed V8 engines of all time. 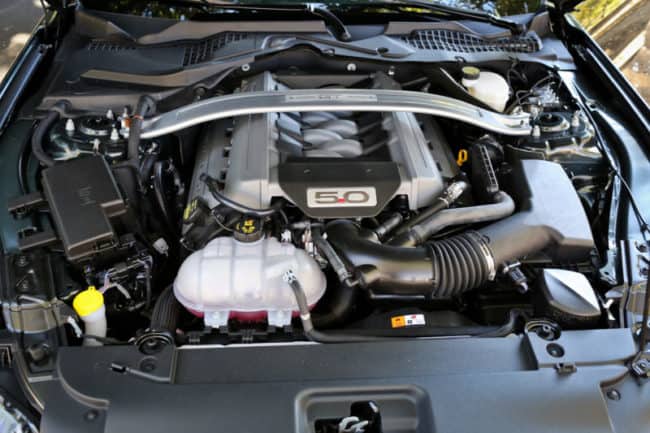 Attention usually goes to the Mustang’s V8 engines, but 6 cylinder motors have been the underpinnings of the line most of the time. The range of engines here is incredible. There’s everything from a simple, durable pushrod inline motor to a highly-sophisticated V6 with just about every form of automotive technology incorporated. Regardless of technology, the job has always been the same – provide a lively performing motor for the budget-minded Mustang buyer. Here’s a look at 5 of the best Mustang 6’s.

Our Number 5 choice is the 250 cu in (4.1L)  Ford Thriftmaster inline six cylinder that was available in the 1969 and 1970 Ford Mustang. The 250 was a actually a 200 with a longer stroke, making the engine undersquare (stroke longer then the bore) which may explain the peak horsepower coming in 400 rpm lower than the 200.

Despite breathing through a one-barrel carburetor, output was 155 hp – very close to the 164 hp produced by the two-barrel 260 V8 in earlier Mustangs. Pound for pound, the Thriftpower also made more torque than its 302 cu in and 351 cu in Windsor V8 counterparts. 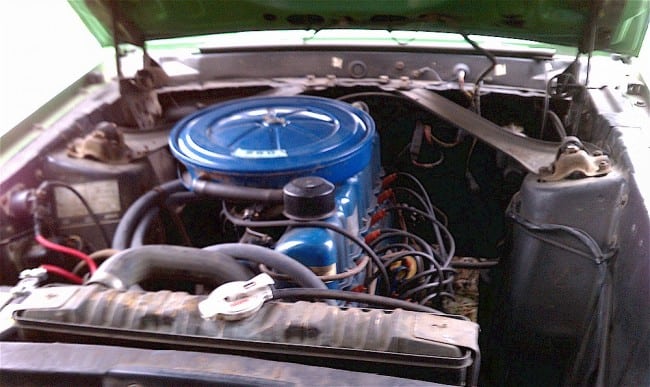 For our fourth choice, we’ve selected the 171 cu in (2.8L) version of the Ford “Cologne” engine. In production since 1965, this Ford of Germany design featured a 60 degree V (to provide more even firing) and an OHV valvetrain configuration.

Despite pushing out just 90 hp, the V6 actually outperformed the Mustang II 5.0L V8 on a displacement versus horsepower comparison, with the V8 delivering only 133 hp (nearly 50% more displacement but only a 32% increase in power). 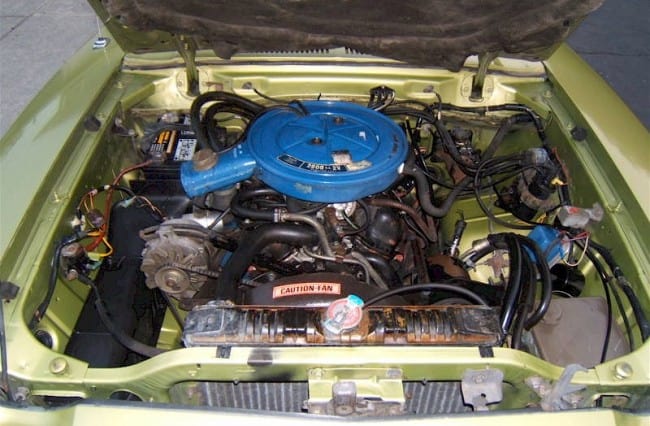 Believe it or not, Ford actually had two different V6 engines in production in Europe at the same time. One was produced in the German city of Cologne and the other in the English county of Essex. The British Essex engine was never used in the U.S. It was, however, heavily modified and produced in Canada, where they changed it from a 60 degree V6 to a 90 degree V6.

The British engine that the Canadians had inherited was much heavier than the Cologne engine, so cast iron heads were replaced with aluminum. This made the Canadian Essex V6 a considerably powerful mill for its size (232 cu in) back in the day. The 2001 version utilized Ford’s IMRC intake system and produced 193 hp.

Our second choice is the bored and stroked version of the 60 degree Cologne V6, but now converted to SOHC configuration. The standard camshaft was replaced by a plain shaft and was driven by a regular timing chain. The plain shaft carried two sets of gears, one for the timing chain for each cylinder head. It’s a similar setup that Ford had once used with its famous 427 SOHC race engine. 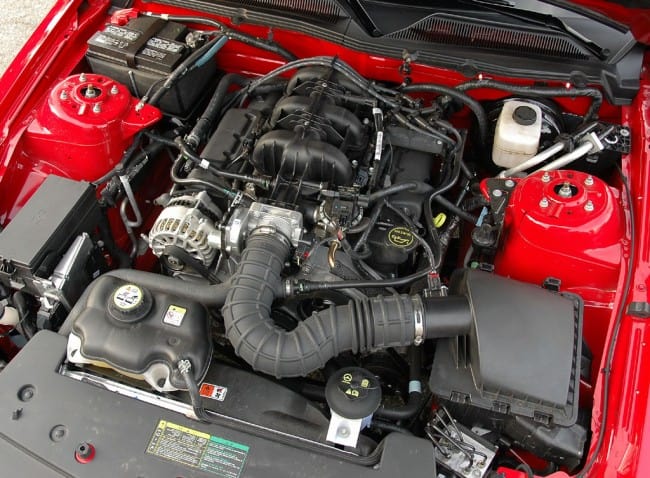 The 227 cu in Duratec V6 is a completely modern engine when compared with the previous designs. Although its name for the general public is Duratec, the code name inside Ford is Cyclone. Notable features for the Cyclone include DOHC 4-valve per cylinder heads, direct acting mechanical bucket (DAMB) camshaft tappets,  gasoline direct injection ,and twin independent variable cam timing (Ti-VCT). 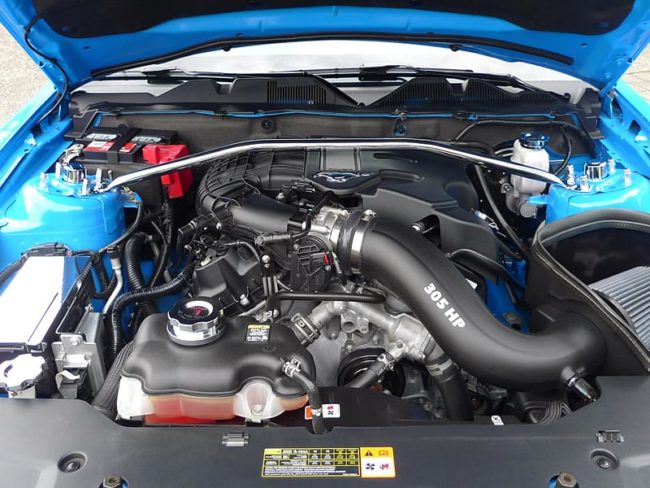 The four cylinder Mustang has always been a rarity – so much so that there were only two different engines of that configuration used throughout the pony car’s illustrious lifespan. It all started with the 140 cu in Lima inline-four (2.3L) which was introduced as the entry-level choice in 1973, in the second-gen Mustang II. The Mustang II was the black sheep of the family for many reasons, but a lack of power was arguably the most prominent one.

An 88-horsepower engine shared with the Pinto was certainly not the way to market a performance car. Then again, the Mustang II was never intended to be a performance car, whether we like to admit it or not. It was a completely different kind of animal than the first-generation models which is understandable considering the enormous difference in challenges the two cars were facing.

The 4-cylinder Mustang II was a success despite its numerous shortcomings, with Ford selling more than 1.1 million units during its five year long tenure. It was a challenging time for the American car industry and the FoMoCo brass have to be given credit for recognizing that downsizing (even as severe as in Mustang II) was the only way to save the nameplate in the long run. One of the most important aspects of the 4-cylinder-powered Mustang II was its fuel economy which, according to the EPA,  reached its peak of 34 mpg on the highway in 1976.

The Lima 4-cylinder would remain the entry-level offering in the third-gen Fox body Mustangs as well, and wouldn’t skip a year until the fourth-generation made its debut in 1993. During that that time, it would witness a switch from carburetors to fuel injection and even receive a turbocharger. The initial turbo four models were plagued by reliability issues, but the 1984-1986 Mustang SVO showcased how good a turbo four Mustang can actually be.

Which brings us to the current-generation’s 2.3L EcoBoost engine that’s rightfully considered one of the best Mustang engines ever produced.

The 2.3L EcoBoost is miles apart from anything the Blue Oval has ever done in the Mustang four cylinder field. With 310 horsepower and 350 pound-feet of twist, it was actually more powerful than the now-discontinued base V6 mill. The 4-cylinder EcoBoost Mustang is surprisingly fast and sounds just about right. What’s more, it provides a perfect balance of power and efficiency which you won’t be able to find anywhere else in the modern pony car world.

Nearing the end of the sixth-gen Mustang’s cycle, the 4-cylinder again serves as the entry-level engine for the iconic pony and judging by how good this powertrain actually is, this trend might continue for a foreseeable time. Most new cars will apparently be offered in that engine configuration. 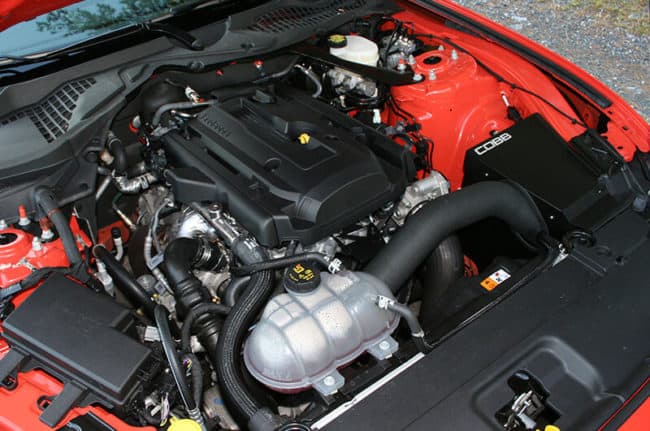 
Tesla Fremont Factory Tells a Tale of Changing Fortunes
The Best of 2021 Cadillac
One-Off Cruise For A Cause "Hope Edition" Shelby GT500SE To ...
8 Lifted Suburban Problems and Solutions
The Best Of 2021 Land Rover
How to Find the Best Used Cars Under 3000