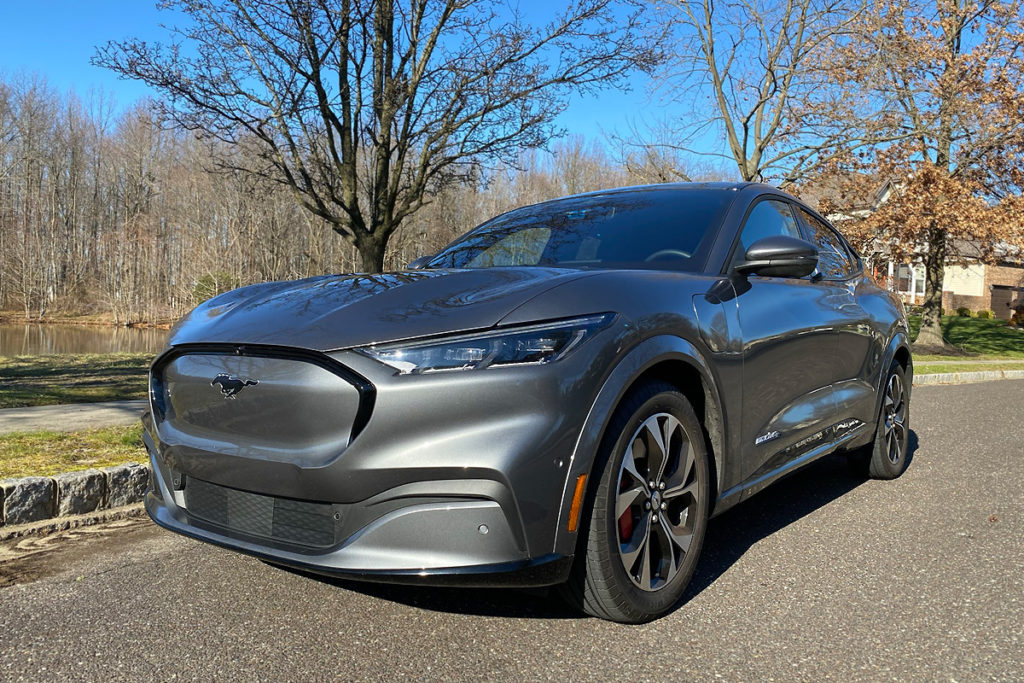 Last year, Ford surprised everyone at the Los Angeles Auto Show with the introduction of the Mustang Mach-E, an all-new, all-electric SUV that the Blue Oval hoped would threaten Tesla’s dominance in the EV space, facing off against the new Tesla Model Y.

While the idea of an electric Crossover/SUV is nothing new, Ford’s decision to attach the Mustang name to it immediately had people up in arms, and even a year later, simply posting a photo of my Mach-E tester on Facebook elicited an onslaught of “That’s not a Mustang!” comments from numerous friends of mine.

Clearly, Ford’s decision to bring the famous pony into the electric age comes with a huge risk, threatening the brand equity that the Mustang spent the past 56-years building up. So does it live up to the sporty expectations that come with the Mustang name? We spent a week with the 2021 Ford Mustang Mach-E First Edition AWD to find out. 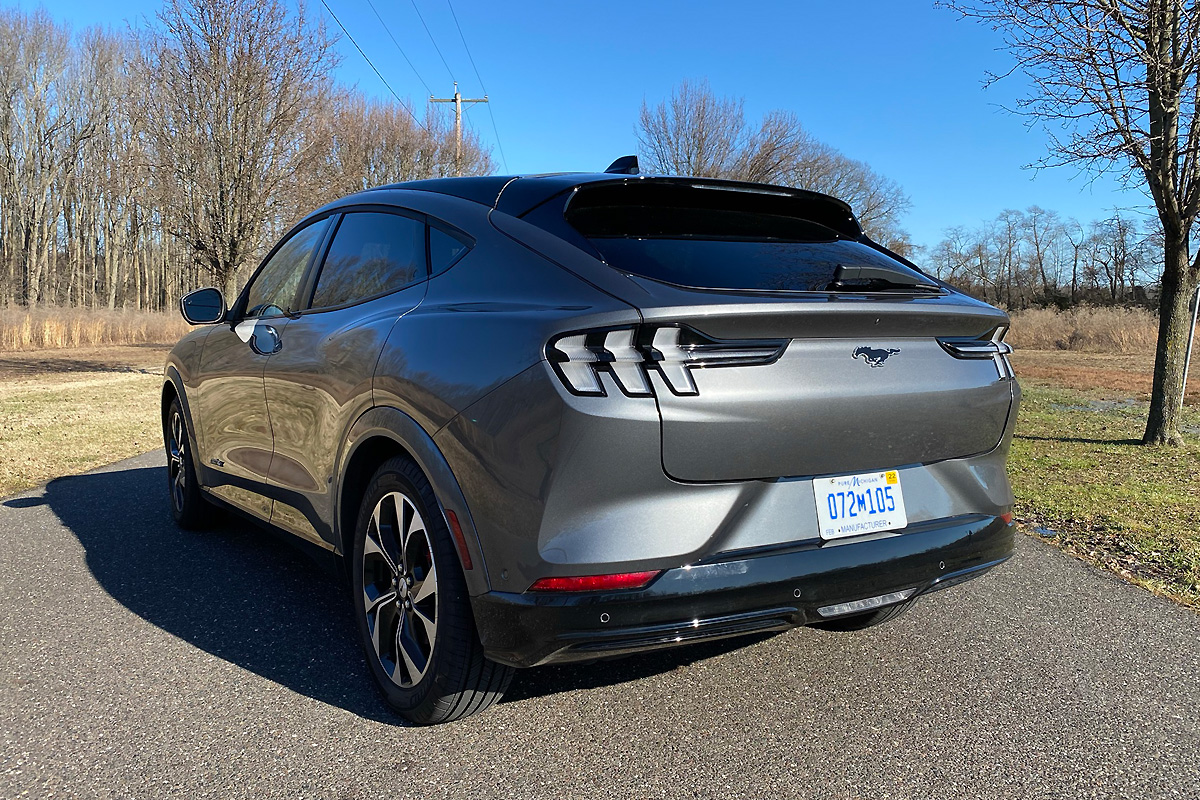 There’s no question that the Mustang Mach-E is a looker, with a sporty, beautiful silhouette that turned heads everywhere I went. It’s one of those cars that you need to see in person to truly appreciate, as photos just don’t do it justice. But within the first few hours with the Mach-E, I had four different people come up to tell me how much they liked the car, along with a Raptor driver who kept slowing down in traffic to sneak a peek.

While there’s no “Mustang” badging save for a pony badge front and rear, the Mach-E does evoke a sort of Mustang vibe. This is thanks to its long, powerful hood, rear haunch design, aggressive headlights, and trademark tri-bar taillamps. It’s got curves in all the right places, and it makes for one distinctive ride! 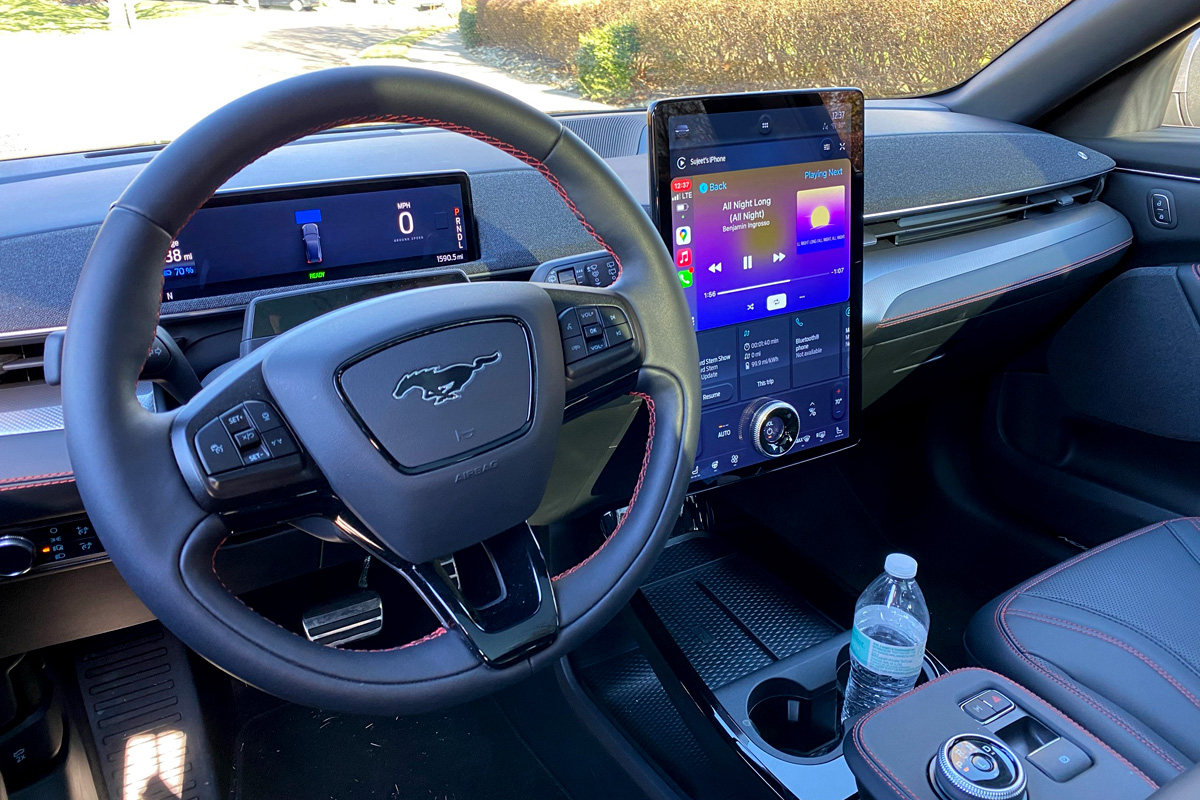 When you step into the Mustang Mach-E, the first thing you’ll notice is the massive 15.5-inch screen that dominates the center of the dash. This is the heart of the beast, controlling virtually every aspect of the car, much like how Tesla does it in their vehicles. But thankfully, Ford left some physical switches and knobs for the most frequently used items, like a nice large volume knob to crank up the tunes on that kickin’ 10-speaker B&O audio system.

I do wish they had given us some physical HVAC controls, as one thing I quickly discovered while driving in the 30-degree weather is that I can’t control the touchscreen with my gloves on. So anytime I wanted to adjust the temperature, fan speed, or seat warmers, I had to pull off one of my gloves to do so. To say this was annoying would be an understatement.

But otherwise, I found the next-generation SYNC 4A system to be great. The UI is very intuitive to use and the placement of everything is well thought out. That is except for the charging screen, which is buried a few levels deep and should be way easier to access. Wireless Apple CarPlay is included, though I found it to be a little laggy at times, giving navigation directions after I passed the turn I was supposed to make. Hopefully, that can be fixed with an update. 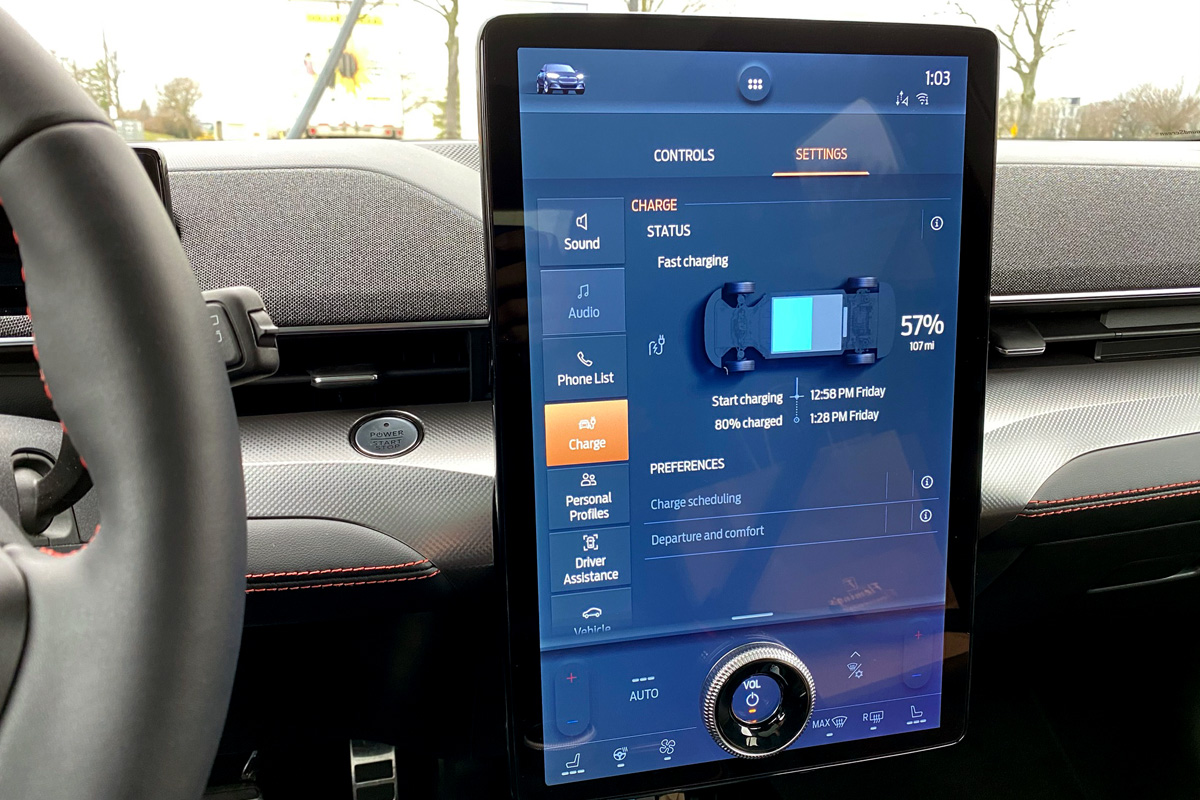 Ford claims that the SYNC system actively starts adapting to you as soon as you start using it, using machine learning to quickly learn your preferences and make personalized suggestions. What’s more, Ford has outfitted the Mach-E with the ability to continuously improve through over-the-air updates, like Tesla first brought to market. These over-the-air-updates are capable of enhancing vehicle performance, offering maintenance updates, and even adding entirely new features. We’re excited to see how Ford chooses to use this new capability.

In contrast to Tesla’s minimalistic interior, Ford added a few touches to give their car’s interior a bit more warmth. Instead of a sea of black plastic, you’re greeted with a mixture of cloth, vegan leather with contrast stitching, brushed metal strips, and carbon-fiber-look plastic trim pieces, and everything feels really polished and well put together. Ford also added a second screen behind the steering wheel that shows your speed and other important info, so you don’t have to look away from the road.

The seats on the Mach-E are among the most comfortable I’ve ever been in, and everyone who took a ride in the car made similar remarks about them as well. They also look great, with sporty lines and contrasting stitching to give it a racy look. The steering wheel also gets a bit of the sporty treatment, with a meaty feel and some nice design elements. While I’m still not a fan of Ford’s rotary shifter, based on the interior design of the Mach-E, there’s really no good place for a traditional shifter, so I’ll give them a pass. 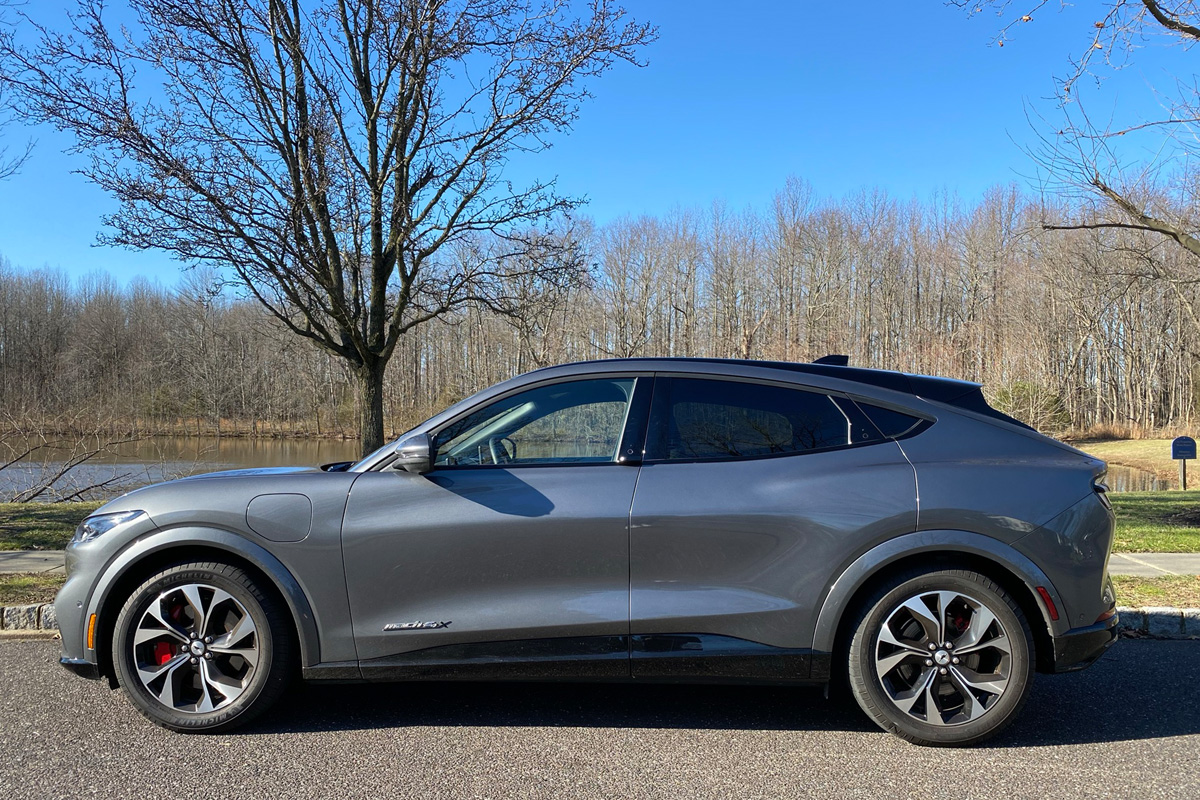 One thing that people don’t realize about electric vehicles is that they can be seriously fun to drive. EVs deliver instant torque right off the line and the battery placement gives the vehicle a low center of gravity for great handling. With 346 hp and 428 lb.-ft. of torque on tap, the Mach-E is rather quick for an SUV. It can sprint to 60 MPH in just 4.8 seconds. Our tester didn’t pin me back in the seat like the upcoming GT Performance Edition Mach-E should, but it’s fun nonetheless.

Where the Mustang Mach-E really surprised me was in the handling department. Despite the fact that I was piloting a 4,800-pound SUV, it felt positively sports car-like (like a Mustang!), staying nicely planted in the corners with very little body roll, with much of that credit going to the placement of the batteries underneath, which gives the car a lower center of gravity and improves the handling. Ford also dialed in the suspension nicely, offering a smooth and supple ride that is very comfortable. In most modes, the steering felt great, not overly boosted and well connected to the road. Braking is strong, and the car’s regenerative braking can be adjusted to your liking.

Drivers can choose from 3 drive modes: Whisper (“Seamless drive, calm and quiet”), Engage (“Balanced drive, fun and engaging”), and Unbridled (Exhilarating drive, machine, and road align as one.”). Naturally, I went for Unbridled mode, as it sharpened acceleration, reduced electric assist in the steering (possibly too much), delivered some artificial “engine” sounds, and added dynamic cluster animations tied to driving behavior. When you accelerate, these little Buck Rogers-like arrows extend across the front screen as you go faster and retract when you slow down. I do wish Ford would let you customize the settings for each mode, as not everyone will want everything that goes along with each mode.

Mach-E Battery Life Leaves Something To Be Desired 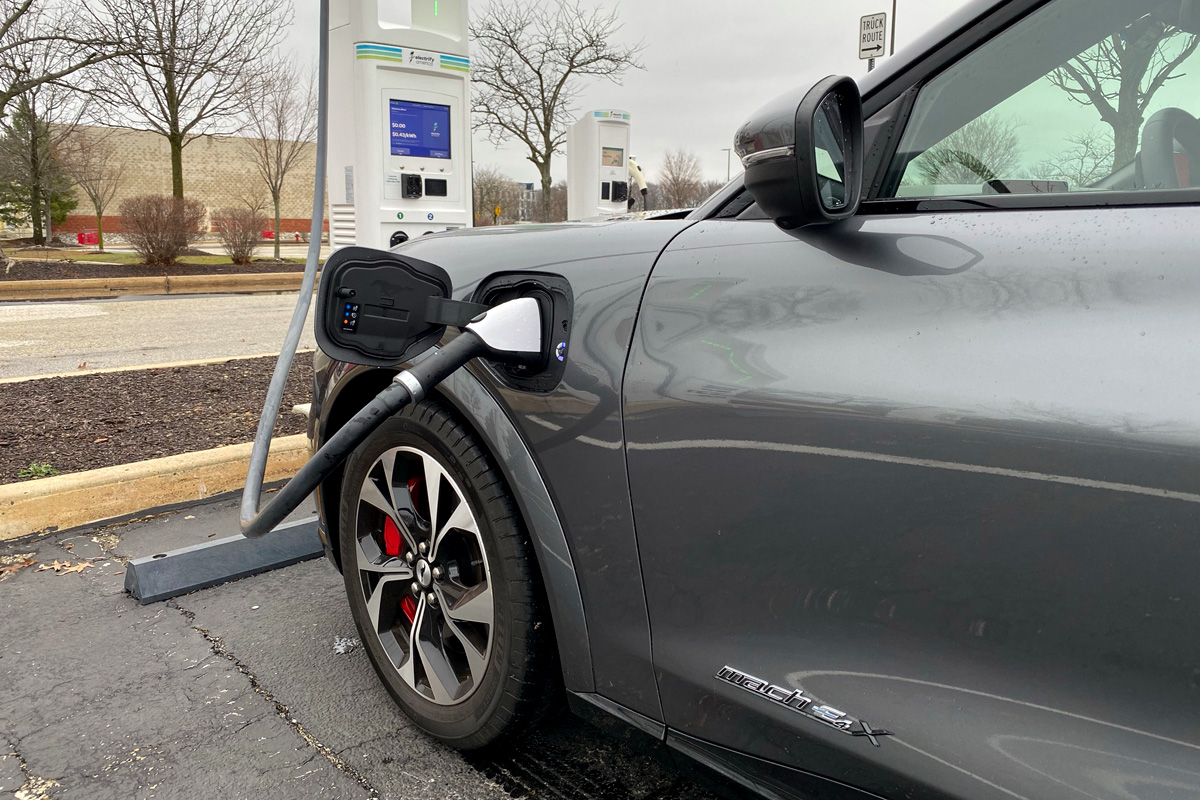 Ford has touted some pretty impressive range and charging figures for the Mach-E to quell the range-anxiety concerns of prospective buyers. In the case of my Ford Mustang Mach-E First Edition AWD tester, Ford claims an EPA-estimated range of 270-miles, and the ability to add an average of 52-miles of range in approximately 10-minutes at an Electrify America DC fast charging station. Did my real-world experience numbers come anywhere close to these? Sadly, not at all!

The car was delivered to me fully charged, yet the battery gauge on the dash showed just over 200-miles of range. Mind you, it was 62-degrees when I received the car, so weather wasn’t an issue (yet). A day later, I had put ~60 miles on the car, and I was down to 110-miles of range. As such, I went in search of a charging station, as I live in a condo and have nowhere to plug in.

Using the FordPass app, I found a couple of charging stations nearby, but these were all slow-chargers that would require me to spend hours and hours there. As it was Christmas Eve, the local Ford dealership was closed, so I couldn’t access their charger (which ironically, isn’t a fast charger either). Eventually, I found an Electrify America fast-charging station about 10-miles away at a Target, and I made my way there on Christmas Day, expecting to spend about 10-15 minutes to get the car back up to 80-percent. 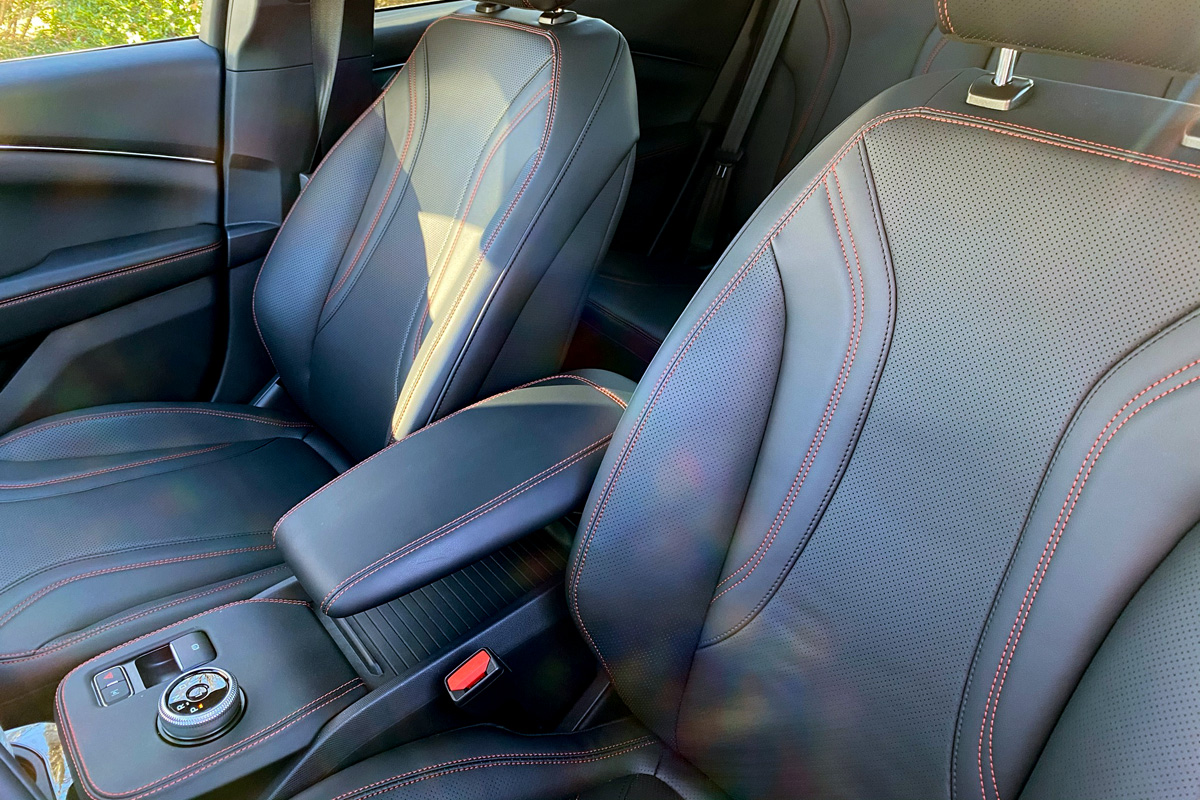 Instead, I ended up spending a bit over 30-minutes at this “fast” charging station to get the car’s battery up to 80-percent, as it was only delivering juice at 63kW, even though the station said it was capable of up to 150kW. Another colleague of mine with a different Mach-E loaner had a similar issue at an Electrify America location 80-miles away from me, so clearly something is amiss. Regardless, with my range anxiety alleviated for the moment, I went on my merry way.

The following morning, I went back out to my Mach-E, and saw that I had lost 30 miles of range overnight, due to the weather turning cold (around 30-degrees). In fact, the car had displayed a warning telling me to park indoors and plug in, but that wasn’t an option for me given my housing situation. Even driving much more conservatively, the battery range on the Mach-E was dropping at an alarming rate, and I was forced to go back to that same EA fast-charging station a few days later to again charge up. And this time, it took twice as long to charge up, the cold slowing down the process even more. 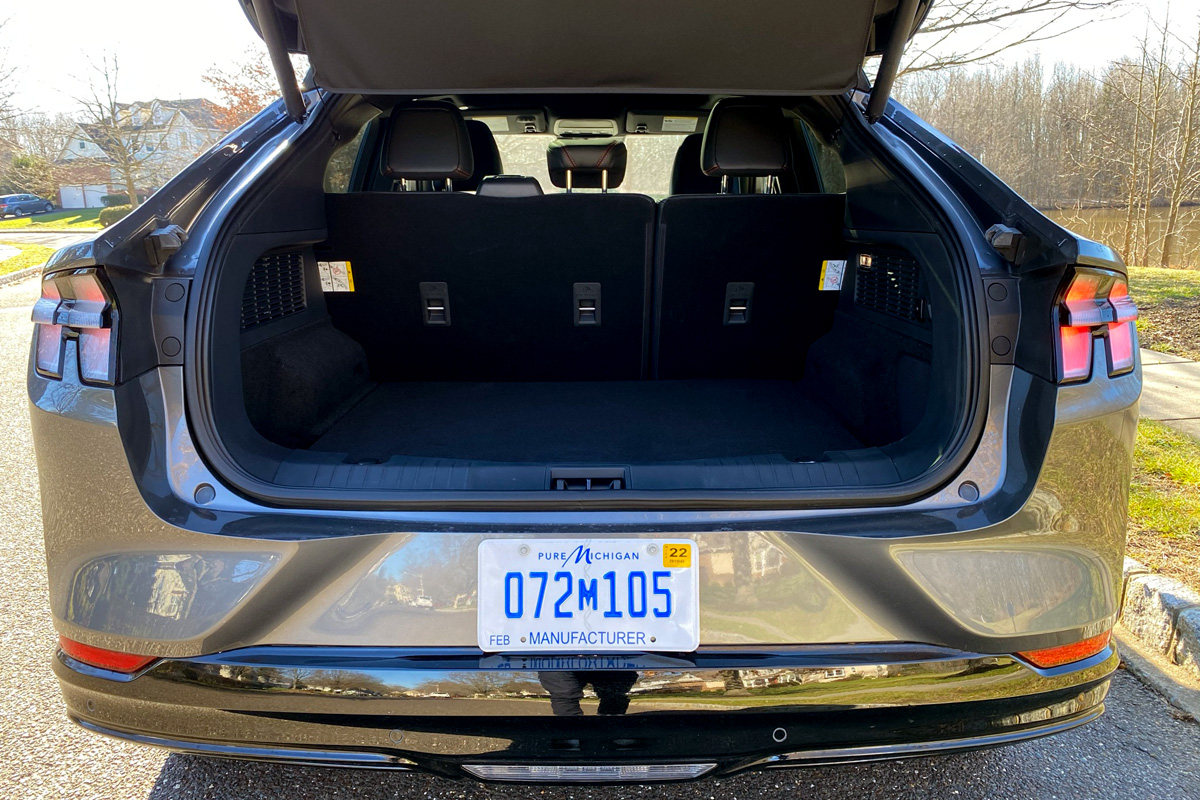 Up until this point, I was very excited about the Mustang Mach-E. The looks, performance, and fit-and-finish were all second to none. But like with other (non-Tesla) EVs, real-world range and a lousy charging infrastructure leave a lot to be desired. Add cold weather to the mix, and the fact that the Mach-E doesn’t have a heat pump like the Tesla Model Y, and it gets worse.

Honestly, I couldn’t even fathom doing a long-distance trip in a Mach-E due to these issues. Not the case with my Dad’s Tesla Model 3, which can do a 1,000+ mile trip from Florida to New Jersey without a problem, thanks to their robust Supercharger network. If you’re looking for a car to drive around town, to and from work, and the likes, the Mach-E will do you just fine. But as Wired’s Eric Adams discovered when trying to do a 400-mile trip in a Mach-E, the current charging infrastructure just isn’t up to the task at present time.

There’s no question that Ford really stepped it up with the Mustang Mach-E. When they first announced that they were going to build an EV and face off against Tesla, I thought they were crazy. But after spending nearly a week with the car, I’ve got to admit, they delivered a solid car on all accounts. If you’re someone who has a garage at home where they can charge their car overnight, a normal commute, you don’t plan on doing any long road trips with it, and you’re itching to join the EV revolution, the Mustang Mach-E might be just the ticket.

For everyone else, you’re better off waiting a few more years while the charging infrastructure catches up. Or just wait for Ford to offer a gas-powered Mach-E. It’s probably not in the cards, but if they did, I bet they would sell like hotcakes!

Pricing for the 2021 Ford Mustang Mach-E starts at $42,895 (before eligible $7,500 federal tax credit), with our fully-loaded Mach-E First Edition AWD model tipping the scale at $58,300. The first batch of Mach-E’s are making their way to dealerships around the country as we speak, so it won’t be long before you see them on the road.