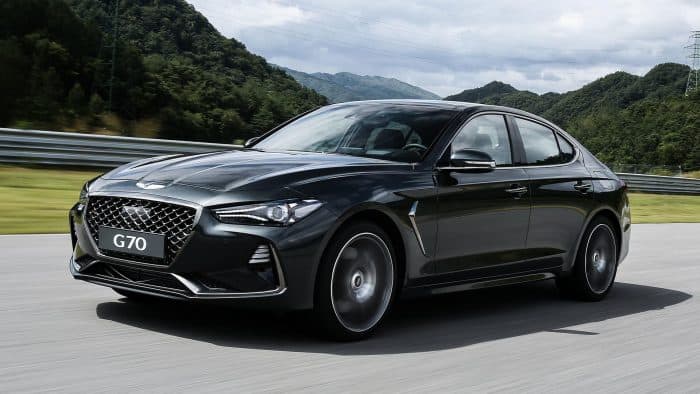 The Genesis brand is now officially the youngest major automotive brand on the U.S. market after it spun off from Hyundai in 2016. The new brand will serve as the Korean manufacturer’s luxury division – similar to what Lexus, Infiniti, and Acura do for Toyota, Nissan, and Honda respectively. The Genesis name, however, dates back to 2008 when the South Koreans first introduced their upscale Hyundai Genesis sedan. The former Hyundai Genesis is currently known simply as the Genesis G80 and it’s joined by another former Hyundai full-size sedan called the G90 (née Equus). The 2019 Genesis lineup will further be bolstered by the all-new compact executive G70 sedan which is already being sold in Hyundai’s domestic South Korean and other overseas markets. Looking further into the future, the Korean luxury brand should soon field a line of upscale crossovers as well, but definitely not in time for MY 2019.

The Genesis division started off slowly in the U.S. by selling 6,948 units during 2016 and 20,594 cars during their first full model year 2017. If the first half of 2018 is any indicator, 2017 will remain their record year for the time being. As already mentioned, however, the all-new Genesis G70 should become the first of many stepping stones in the Korean brand’s quest for a respectable market share. The initial idea was to push the number of total available models to six by 2020, which would be achieved by adding a sports coupe and two crossovers to the current Genesis lineup. As MY 2020 is drawing nearer, however, the profound lack of substantial info on their progress isn’t exactly promising in that respect. Regardless of whether they make it in time or miss the mark by a year or two, Genesis Motors has only one way to go from here – up!

The entry-level luxury sedan is already on sale overseas and MY 2019 marks its arrival to U.S. shores. The upcoming 2019 Genesis G70 aims to become the brand’s best-selling vehicle from the moment it arrives in the market. At least until the South Koreans introduce their GV crossovers in a year or two. Until that happens, though, the compact executive is expected to ruffle some feathers. It’s stylish, refined, tech-savvy, and even quite sporty if you want it to be. What’s more, the G70 offers a number of available options that should set its price range to a region between $35,000 and $55,000. Features like quilted nappa leather seats and the 15-speaker Lexicon audio system will only be reserved for range-topping models, though. Also, the 2019 sedan should serve as a precursor to even better-looking G70 coupe expected to arrive a year o two later.

The all-new Genesis G70 comes with a couple of available powertrains. The base 2.0L turbocharged 4-cylinder makes 252 horsepower and 260 lb-ft of torque, while the more powerful 3.3L twin-turbo V6 develops as much as 365 hp and 376 pound-feet. Surprisingly, base models will all come in a rear-wheel-drive configuration instead of the segment’s standard front-wheel drive. An optional all-wheel drive is available as well, of course. Another surprising addition is the optional 6-speed manual transmission, whereas most models will probably retain the standard 8-speed auto setup. Apart from the rear-wheel drive and manual gearbox, the sporty G70 options will also boast a mechanical limited-slip rear differential, 4-piston front and 2-piston rear Brembo brakes, and Michelin Pilot Sport 4S tires. However, most of these will either have to be ordered separately or obtained by ordering more expensive top grade models. Then again, its future rivals from Germany – the BMW 3 Series and Mercedes-Benz C Class – have been doing the same thing for years. 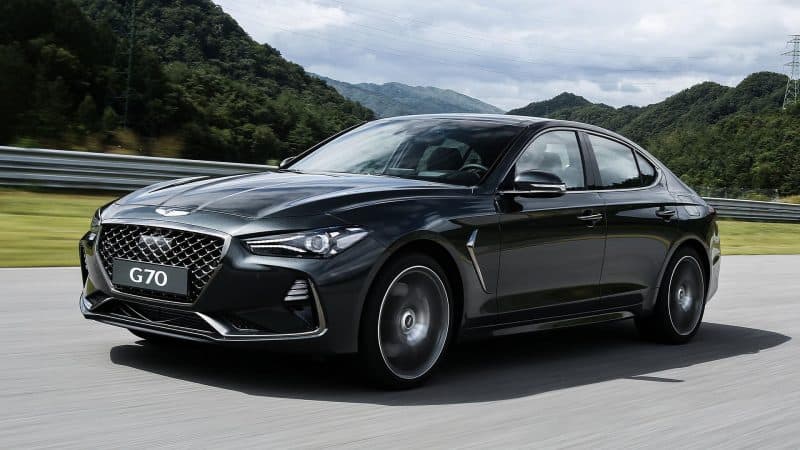 Hyundai’s premium division might have sold only 4,398 of its flagship luxury sedans in the U.S. during the entirety of 2017, but that doesn’t undermine the G90’s value for money, nor its capabilities. The direct successor to the late Hyundai Equus is currently available in regular and long wheelbase versions, and both exhibit much greater level of luxury, refinement, and technology than the Equus ever did. Needless to say, they’re also much more expensive for it considering how the entry-level premium models start from $68,500, whereas the fully-upgraded G90 Ultimate starts from $74,500. However, the long-wheelbase Mercedes-Maybach competitor is currently unavailable in the states. In South Korea, the G90L – or the EQ900 as they call it – costs well north of $120,000. All these figures are here to remind everyone thinking about the G90 as another economy Hyundai, to think again. This highly-refined plushy full-sizer is anything but an affordable South Korean family ride.

The 2019 Genesis G90 offers two highly thirsty powertrain choices. Basic Premium models come with a 3.3L twin-turbo V6 that’s also standard with the smaller G80 Sport, but optional with the mid-size G70. The engine develops 365 horsepower and 376 lb-ft of twist and can be ordered with either a rear-wheel drive or a $2,500 option all-wheel drive. Top-of-the-line Ultimate models, on the other hand, come with a 5.0L V8 that makes 420 horses and 383 pound-feet of torque. It, too, comes with either rear or all-wheel drive. Regardless of your engine of choice, every Genesis G90 sports an 8-speed automatic gearbox. Despite failing to offer a respectable fuel economy, the Genesis G90 still stands out as one of the best value for money options in the luxury car world. Not only does it have a ton of features, but it’s arguably one of the best-riding cars money can buy. It certainly shows you don’t have to splash north of $100,000 on the Mercedes-Benz S Class in order to enjoy a cloud-like cushioned ride. 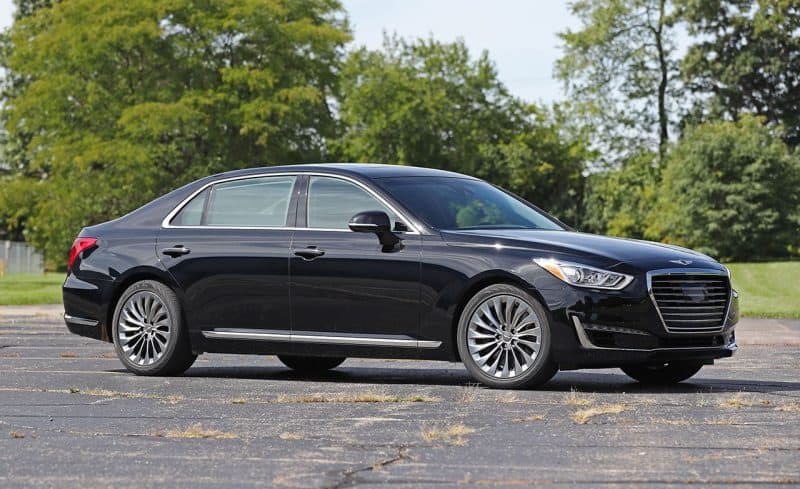 The original second-generation Hyundai Genesis debuted during MY 2015 and subsequently went through a forced mid-cycle facelift for MY 2017 in order to comply with the brand’s new strategy. It’s now MY 2019 time and Hyundai still isn’t planning on doing additional work on the G80 sedan. Considering it’s one of the prettier luxury sedans out there, they don’t really have to. The 2019 Genesis G80, like every other Genesis model, offers a great value for the money. If you’re curious enough to explore outside of established marquees, that is. Apart from being soft on the eye, the G80 offers a long list of available convenience and tech goodies, plenty of room, and a plush interior worthy of a luxury badge. What’s more, the Koreans are offering an extended warranty and three years of valet service, making them the only brand(s) that offer anything like it at the moment.

Apart from the G80 Sport, which has found itself under the “Not” part of our coverage, the Genesis G80 offers two additional powertrain options. The entry-level models, which start from just under $42,000, pack a 3.8L V6 engine capable of making 311 horsepower and 293 pound-feet of rotational force. Choose the Ultimate package for $57,000 and you’ll get a 5.0L V8 that cranks up 420 hp and 383 lb-ft of torque. Both are mated to an 8-speed automatic transmission and can be ordered with either a rear or optional $2,500 all-wheel drive. Although they obviously don’t suffer from a lack of power, the use of naturally aspirated mills translates to a rather poor fuel economy figures – even for a luxury car. Then again, the G80’s starting price puts every other luxury option out there at a disadvantage, and that’ll likely be Genesis’ strategy for foreseeable future. 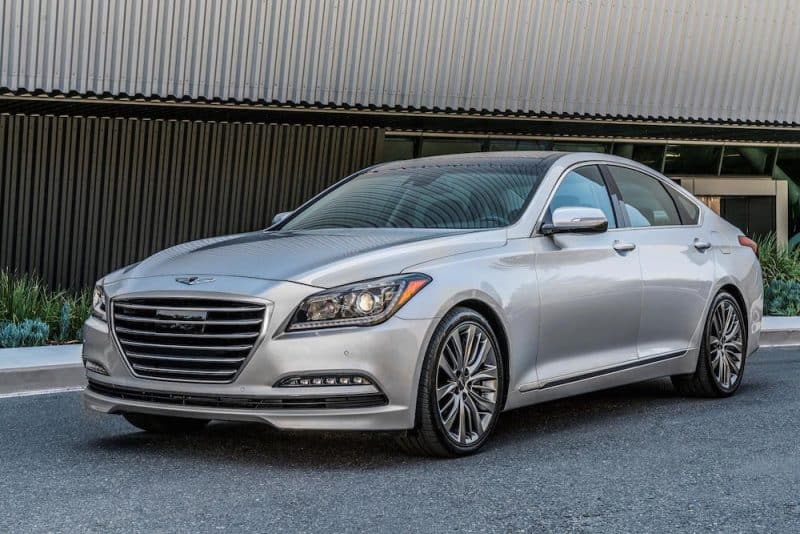 What’s Not In the New 2019 Genesis Lineup

The recently introduced Genesis G80 Sport comes at the right moment to refresh the slowly-aging G80 lineup. Unlike the rest of the G80 models, the Sport trim comes exclusively with the company’s 3.3L twin-turbocharged V6 which is capable of producing 365 horsepower and 376 lb-ft of twist. Sadly, the G70’s 6-speed manual isn’t available with the G80 (at least not yet), but the 8-speed automatic with manual shifting isn’t the worst replacement out there. Despite weighing a hefty 4,519 pounds, the rear-wheel-drive Genesis G80 Sport is capable of accelerating from 0 to 60 mph in just north of 5 seconds. On the other hand, the all-wheel-drive G80 Sport adds another 155 pounds to the tally and requires about 5.3 seconds in order to hit the 60 mph mark. Regardless, the G80 Sport still feels incomplete. It’s neither truly sporty nor exactly the most refined of all the Genesis models. This awkward middle ground is exactly what the Korean automaker should have tried to avoid during these early days.

The 2019 Genesis G80 Sport starts from around $55,000 in its rear-wheel-drive form, whereas the all-wheel-drive model costs an additional $2,500. It’s not exclusively the all-wheel drive that’s included in that package, however. For some reason, the Koreans will also throw in a heated steering wheel. Other than that, the G80 Sport will come with all the necessary modern-day gear like Android Auto and Apple CarPlay integration, navigation, and loads of active electronic safety features. The interior is also spacious and well-refined, which are both unlikely feats for a sports car. Then again, as already mentioned above, the G80 Sport isn’t exactly a sports sedan. The upcoming G70 should be much more sport-focused if properly fitted. Not that the G80 Sport is a bad car – far from it. It just could have been more expressive in our opinion. 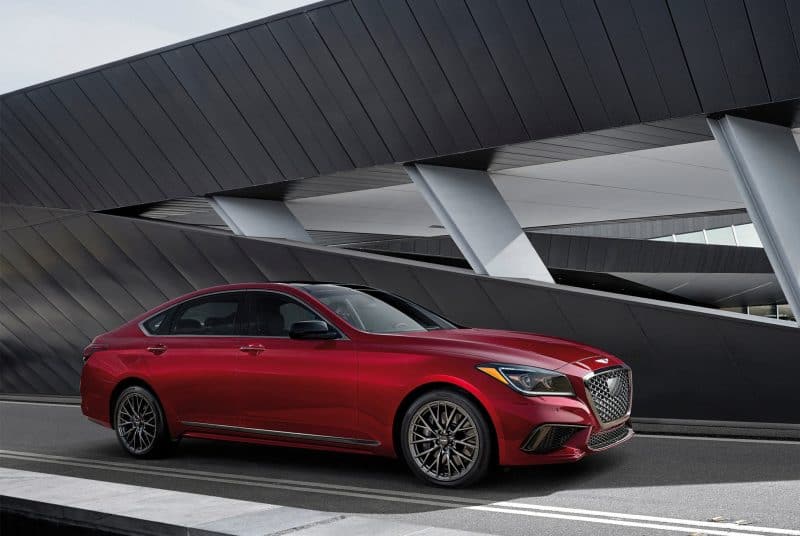