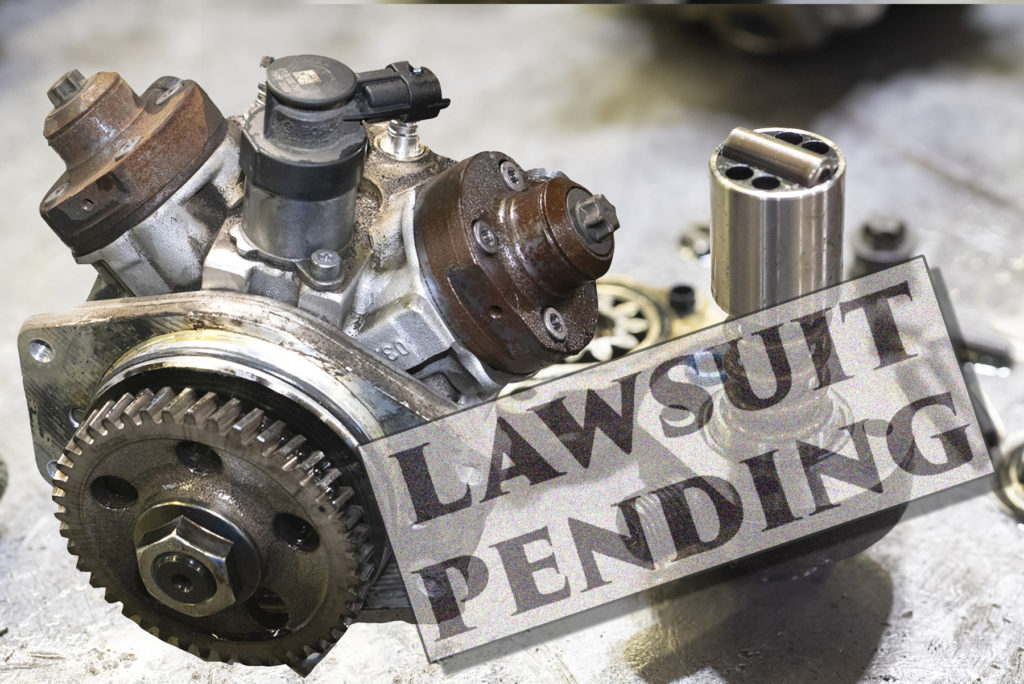 It’s been a little more than 2-years since the first class-action lawsuits were filed in Texas and California federal courts pitting owners/leasees of diesel pickups and SUVs against General Motors, Ford, and Fiat Chrysler Automobile Group (FCA) focusing on the vehicles’ defective Bosch CP4 high-pressure fuel-injection pumps. CP4 failures have cost the owners anywhere from $8,000-$20,000 to get their diesel-powered vehicles back on the road, because in many cases the manufacturers wouldn’t cover the repairs under warranty. Those court actions were quickly followed by similar class-action lawsuits resulting from CP4 diesel-injection pump class actions filed in the Southern District of Florida, the Eastern District of Louisiana, and the District of New Jersey.

So where is the Bosch CP4 injection pump controversy now? It’s still rolling along.

There are six lawsuits now before the federal courts, split evenly between Michigan and Texas, according to Attorney Lauren Akers of Hilliard Martinez Gonzales LLP, which represents the vehicle owners, along with the law firms of Hagens Berman Sobol Shapiro LLP and Morgan & Morgan PA, among others.

At the heart of all the controversy is the reliability of the Bosch CP4 (technically CP4.1 and CP4.2, depending on the number of pumping cylinders) high-pressure fuel-injection pump that is literally the heart of these vehicles’ diesel engines:

All of the lawsuits allege the CP4 is defective, in that it was originally designed for use in Europe where diesel is dirtier and more lubricious than that of the ultra-low-sulfur diesel used in the States. To that end, the lawsuits allege that the auto manufacturers were duplicitous in their marketing and sales pitches to buyers and leasees about the reliability and efficiency of vehicles equipped with the CP4-based fuel-injection systems.

In a Nov. 17, 2020 press release from Hilliard Martinez Gonzales LLP related to one of the Ford lawsuits, the CP4 problem is described this way: Because of the heightened pressure that the CP4 exerts in order to increase fuel efficiency, it causes the pump to disintegrate on itself, as the pump’s internal metal parts rub against one another generating friction such that metal shavings wear off and are dispersed throughout the high-pressure fuel injection system.  This process begins from the very first crank of the Power Stroke engine.

Once these metal shards have sufficiently contaminated the high-pressure fuel injection system, the CP4 fuel pump will suddenly and catastrophically fail — oftentimes while the vehicle is in motion — and become unable to be restarted.

What is more, the “repair” cost for a catastrophic CP4 failure is frequently upwards of $10,000, a cost which Ford generally refuses to cover under warranty by blaming the consumer for “fuel contamination” — contamination which is caused by the shredding CP4 itself.

Attorney Bob Hilliard, who has initiated a series of CP4-based class action cases across the country against automakers like Ford, GM, and Chrysler, issued a statement saying, “The fuel pump is the heart of the diesel engine. Ford intentionally put a defectively designed CP4 fuel pump in every one of its 6.7L Power Stroke diesel trucks—and, as yet another Court has recognized, from mile one it will begin to fail.

“There is no fix. The only question is how much will it cost the customer?  Generally, the answer is in the tens of thousands of dollars. As Ford is now about to learn, Don’t Mess With Texas Trucks!” says Hilliard.

But Ford’s 6.7L Power Stroke appears to be the lesser of the diesels with CP4 troubles. GM’s Duramax seems to get far more attention, with magazine articles covering the repairs, and owners speaking up on diesel forums about the 6.6L’s CP4 issues.

The result of a CP4 failure in 6.6L LML GM Duramax is just as costly as in a 6.7L Power Stroke because the metal debris floods the entire high-pressure fuel system from fuel lines, fuel rails, pump and injectors, necessitating replacement of all of those components and the removal/flushing of the fuel tank.

But unlike the Ford 6.7L Power Strokes, the CP4 in the 2010-2016 GM heavy-duty pickups and vans can be retrofitted with the Bosch CP3, which has a proven track record of reliability. (Note: GM switched from Bosch to Denso high-pressure fuel-injection systems with the introduction of the LP5 Duramax in 2017.)

Unfortunately, there’s no such retrofit kit for the Ford 6.7 Power Strokes because of the way the CP4 pump is mounted in the engine. However, S&S does offer a CP4.2 bypass kit (aka “Disaster Prevention Kit‘) which reroutes fuel from the pump’s bottom end back to the tank and filters.

This re-routing prevents metal debris from contaminating the rest of the high-pressure system if/when a failure occurs. This bypass kit is also CARB legal and covered by a 2-year warranty.

The End In Sight

The CP4 failure controversy rolls on. According to Akers, both sides will be continuing the massive legal proceedings in the six lawsuits through 2021, with the first of the trial dates set for March 2022. Until the first trial, attorneys on both sides continue to investigate and plan out their days in the courts.

Akers says Ford, GM, FCA, and Bosch “continue to deny the existence of the CP4 fuel pump defect altogether, despite overwhelming evidence to the contrary.”

“Ideally, if one of these OEM-specific classes gets certified by the court and then we’re successful on the merits, individuals who purchased that OEM’s vehicle(s) would be entitled to a portion of any recovery obtained,” says Akers.  “But that being said, there aren’t any guarantees in the litigation process and we’re a long way from the finish line.”

If the manufacturers named in the lawsuits lose, there could very well be a massive recall of the affected vehicles. At the very least a win by the vehicle owners would mean monetary compensation for the repairs they coughed up to have the damage caused by CP4 failures fixed.

Of note, GM switched from Bosch to Denso high-pressure fuel-injection systems with the introduction of the 2017 6.6L LP5 Duramax.