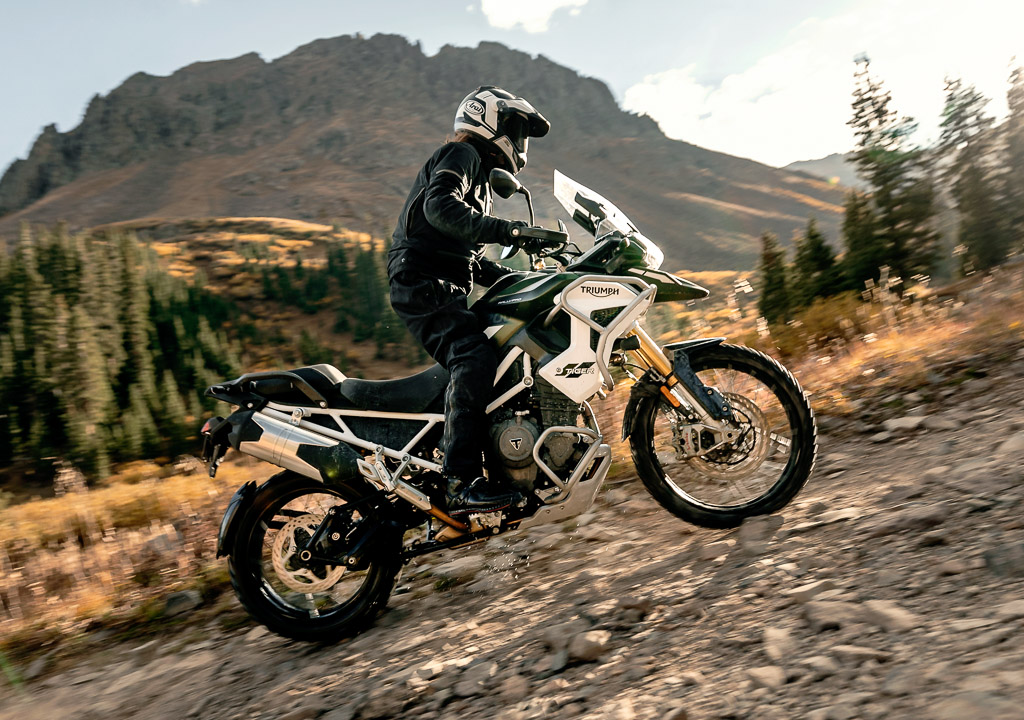 Amid much anticipation, Triumph’s new Tiger 1200 finally arrives. For fans of the brand, it looks to be worth the wait. The new bike is an incredible 55 pounds lighter than the previous Triumph Tiger, and, the brand claims, 37 lbs. lighter than its closest competitor.

The new T-plane triple engine fuses the low-end torque of a double with the flat-out power of a triple. Max output is 148 hp at 9,000 rpm. And with the bike both lightened up and trimmed down, it should be a comfortable touring bike for a wide swath of riders.

Ricky Carmichael, motocross legend and Triumph ambassador, attests to the bike’s agility. “If you didn’t know that it was a 1200, you would have thought it was a 900.” Because of the weight, balance, and sitting position he assessed, he felt he could hold tighter lines.

The adroit adventure bike starts with its redesigned engine. T-plane combines the low-end grunt of a twin with the open-throttle benefits of a triple. The idea is to, of course, allow it to crawl over rocks and gallop over asphalt. Technically, the crank gives the new engine one short and two long gaps between firing pulses at 180, 270, and 270 degrees—this offset firing order results in a different engine character and tractability at low rpm.

The new 1160cc triple cranks out 147.9 hp at 9,000 rpm — nine more horses than the previous generation. It also improves the predecessor’s torque, with 95.9 ft-lbs of peak torque at 7,000 rpm — 5.9 ft-lbs up on the previous engine. From the cylinder head to the gearbox to the shaft drive, every significant component has been redesigned for weight reduction and spatial compaction. 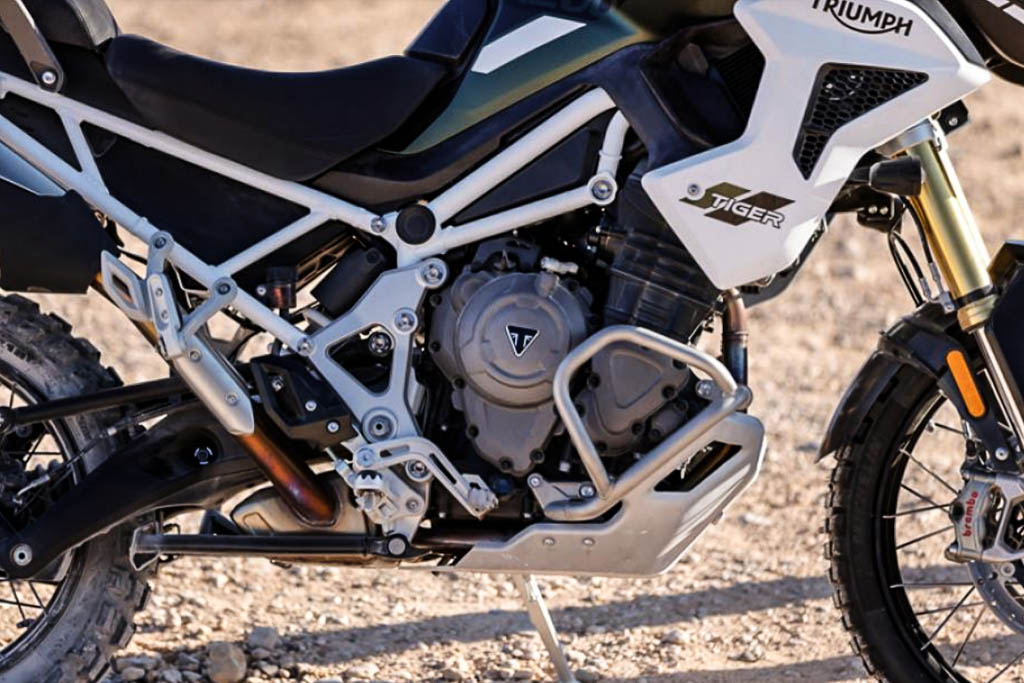 Other Drive Components and Chassis 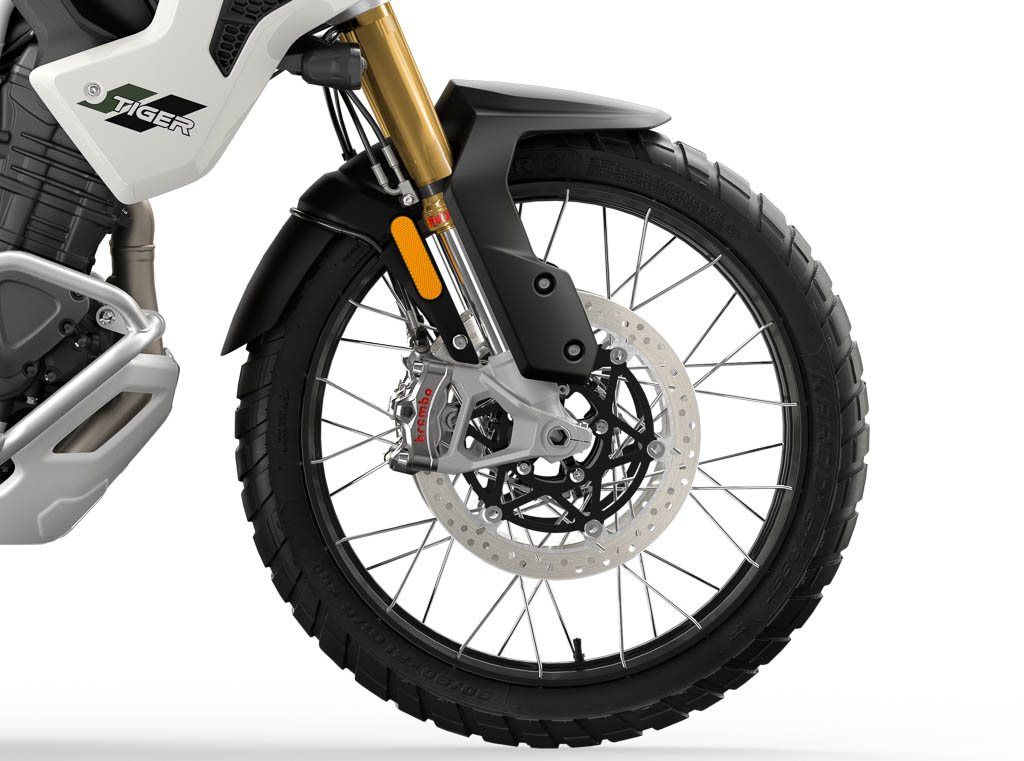 Each bike gets a Showa semi-active suspension; fork travel is 7.9″ for the GT models and 8.7″ for the Rally models.

The Tiger’s new frame, which is 11.9 pounds (5.4kg) lighter than the previous design, contributes significantly to the weight reduction. A bolt-on aluminum rear sub-frame and bolt-on pillion hangers, developed from customer feedback, are also on board. The aluminum fuel tank and a tri-link swingarm, which is 3 pounds lighter and measurably more robust than the previous single-sided variant, also save weight. 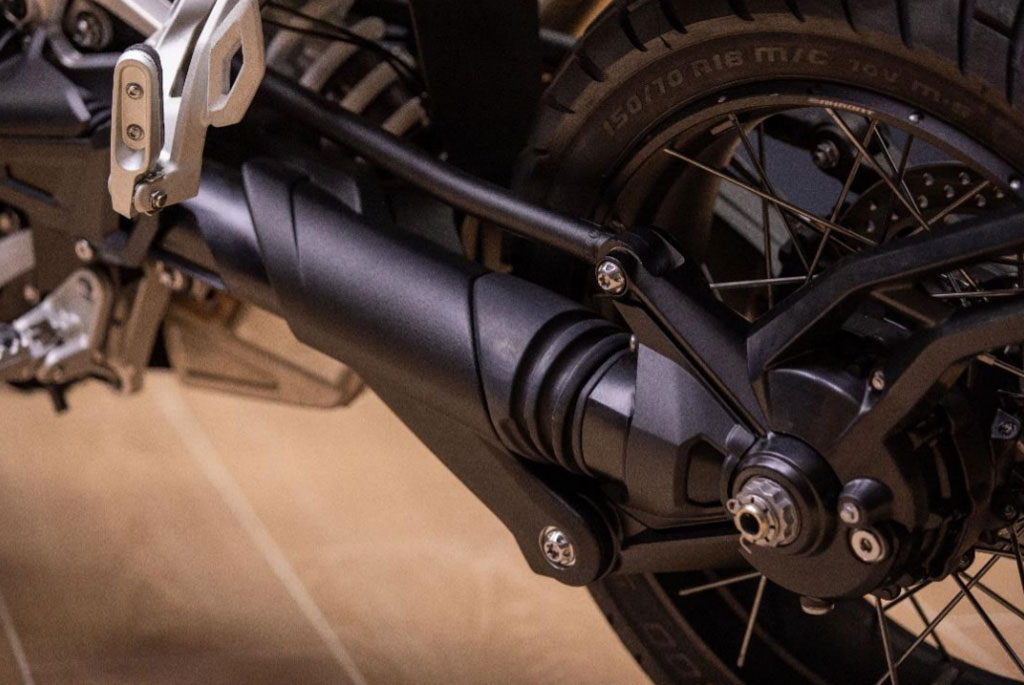 All models also feature an easy-adjust seat, which enables seat heights variable by 20mm. Choose between 850 and 870mm for the GT, GT Pro and GT Explore. The Rally Pro and Rally Explorer seats adjust to either 875 or 895mm.

The Explorer trim levels have 7.9-gallon tanks for added range (vs. 5.2 gallons for the rest of the lineup) and blind-spot radar to keep you safe on the long haul.

The new screen adjusts with one hand for added comfort, and aero screen diffusers shield the rider and pillion from the wind. Handlebars are 20mm wider and 16mm higher than previous generations to improve off-road handling and standing comfort. 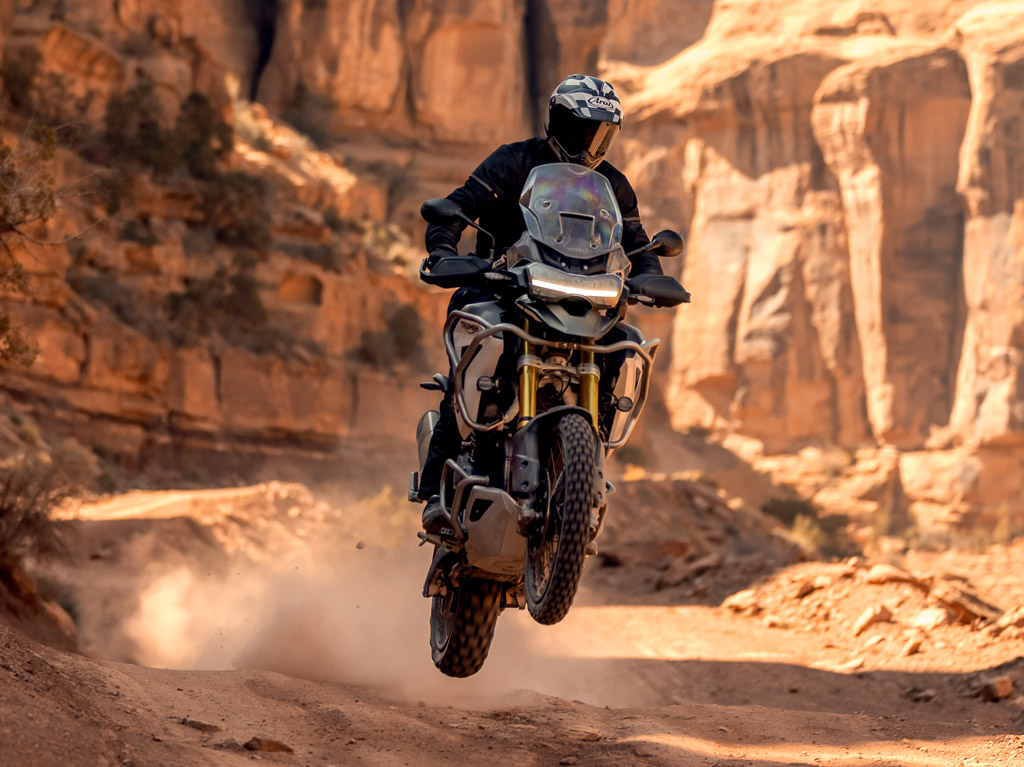 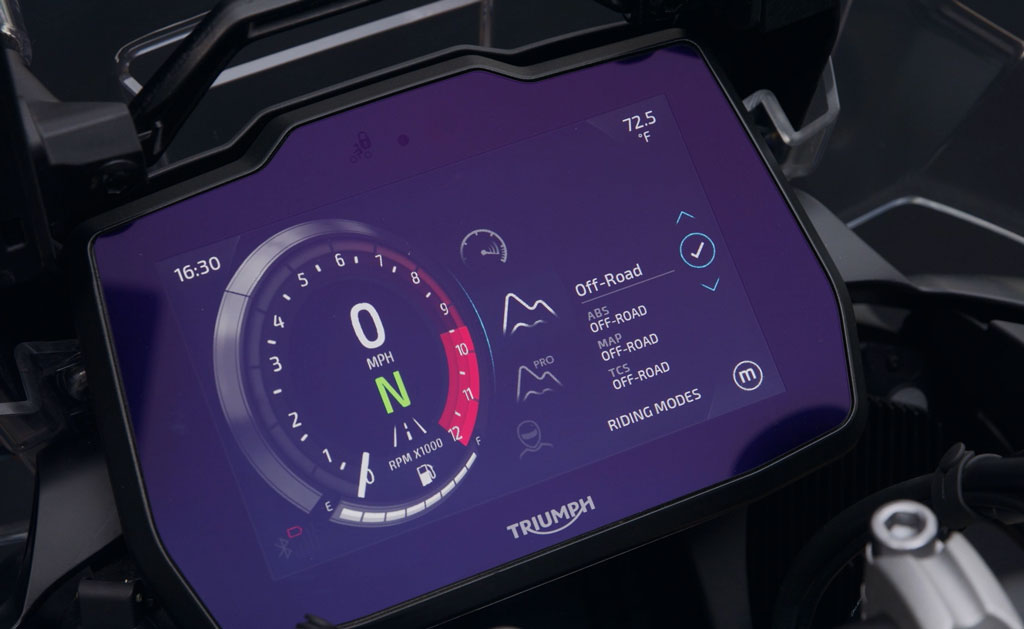 Riders can choose from up to 6 riding modes depending on the model. Based on riding conditions, the presets modulate throttle response, ABS, traction control, and suspension settings. The most extreme off-road set-up, for instance, cuts off ABS and traction control and adds an off-road throttle map. On the other hand, rain mode limits the bike to 100 horsepower and intervenes for traction and braking. 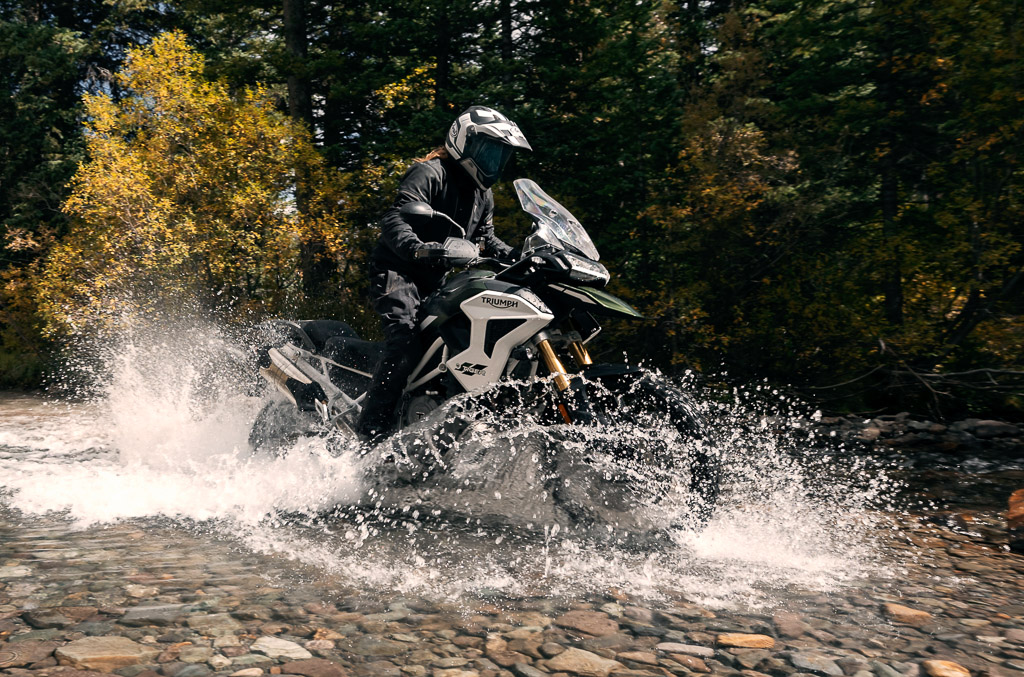 For high visibility, adaptive cornering lights come standard on all models except the Tiger 1200 GT.

Autopilot-esque tech features include Triumph Shift Assist, which lets the rider shift without engaging the clutch, and Hill Hold, which mashes the brake automatically before the rider takes off on a steep hill.

Heated grips and seats are available at various trim levels throughout the Triumph Tiger range, as is tire pressure monitoring. More standard creature comforts like an under-seat USB charger and cruise control come on everything except the GT. 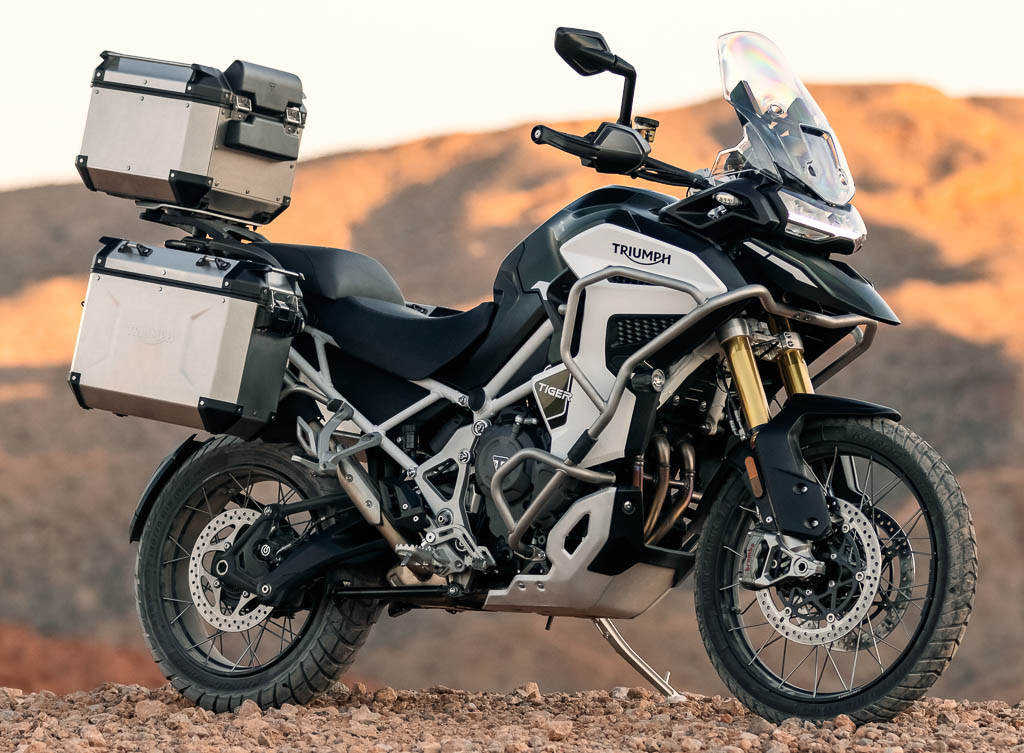 Luggage kits with a variety of helmet boxes and panniers are also available.