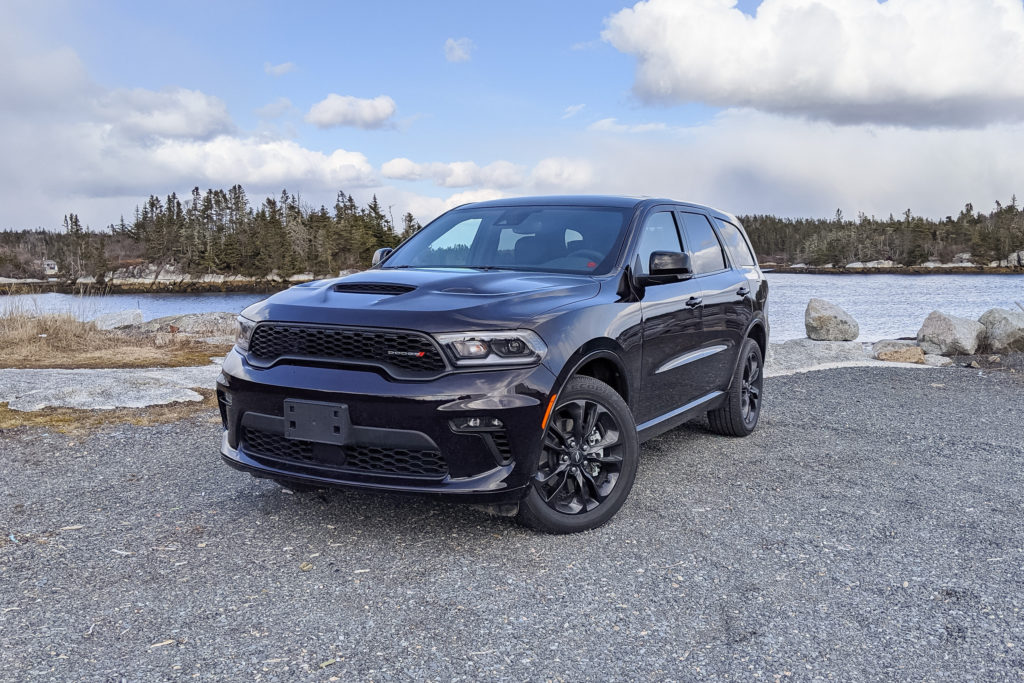 If you’re in the market for a Durango, you’re likely drooling over the 710 hp supercharged Dodge Durango SRT Hellcat. If so, you’re probably pondering getting 13 mpg while sitting in line at school pickup, the insurance costs, tire bills, speeding ticket costs, and the general safety of Junior’s first car having enough torque to alter the earth’s rotation. Limited production and a high price tag might also be on your mind.

Dodge understands. That’s why they’ve created the 2021 Dodge Durango GT. A model that gives you loads of Hellcat and SRT looks but with a powertrain that’s a lot more aligned with the purpose of a typical 3-row SUV.

We spent a week with the 2021 Durango GT and drove around 300 test miles in that time. Let’s dive into what we found with this aggressive-looking SUV with a tiny heart under the hood. 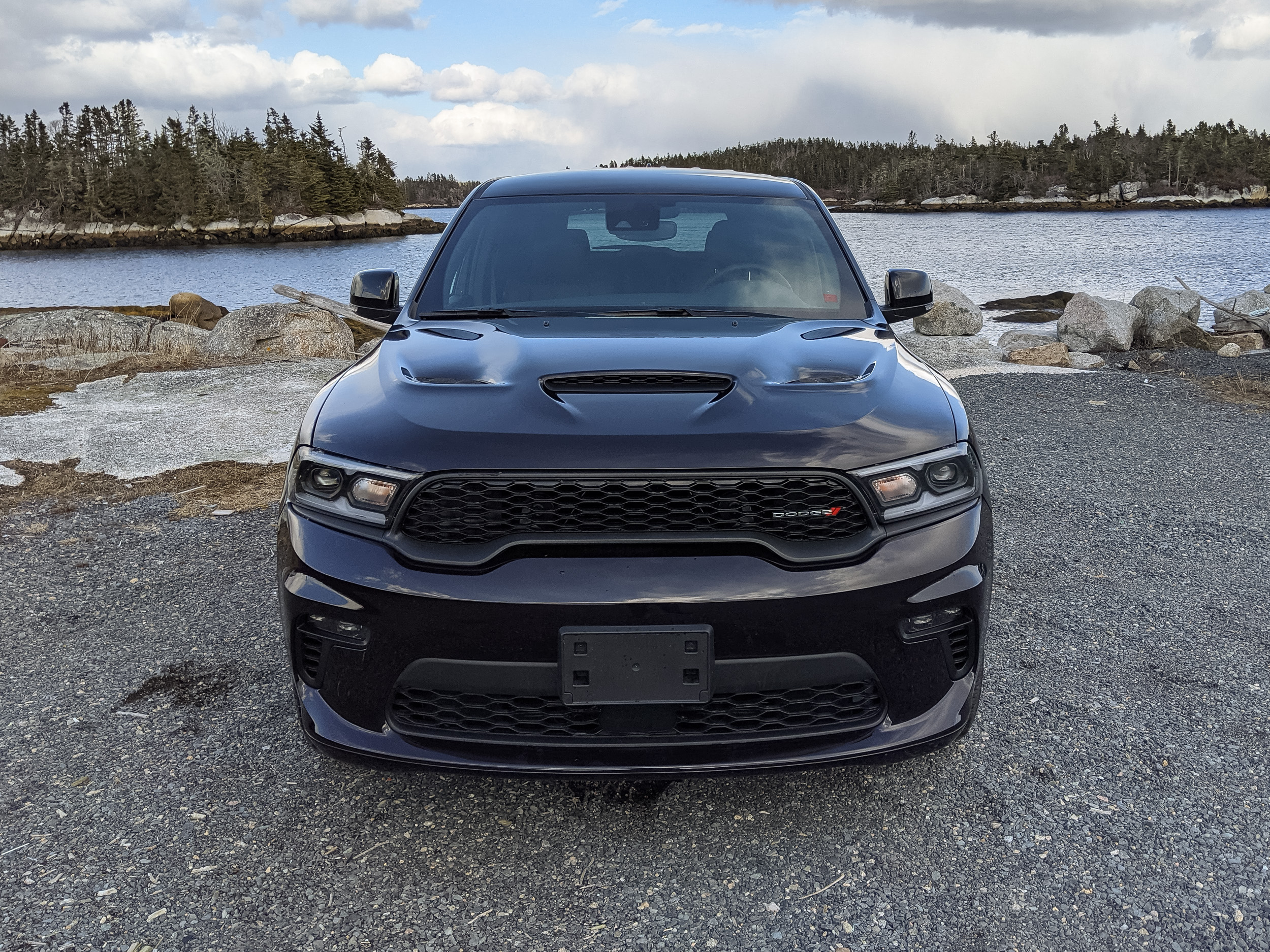 It starts with the honeycomb grille with a black finish instead of the chrome surround offered on other trims. More mesh lies below the grille – the nose restyled for the new model year – and all-black trim for the fog lights serving a meaner appearance. These enhancements vault the Durango GT’s styling in line with the rumblier versions of this big SUV, with big twin tailpipes and 20-inch twin-spoke alloys adding to the attitude.

From there, you can make the 2021 Dodge Durango GT even meaner with a set of dual hood stripes, just like on the SRT models. The optional performance hood has a big SRT-style duct and open heat extractors that may or may not function as such, but they do make it possible for you to fill your washer fluid without opening the hood. Lastly, a Blacktop package gives you black 20’s, gloss black badging and mirrors, and a satin black Dodge tail lamp badge.

In short, especially in the ‘In-Violet’ color our test vehicle came in, the Durango GT looks aggressive and ready to tear up some tarmac. 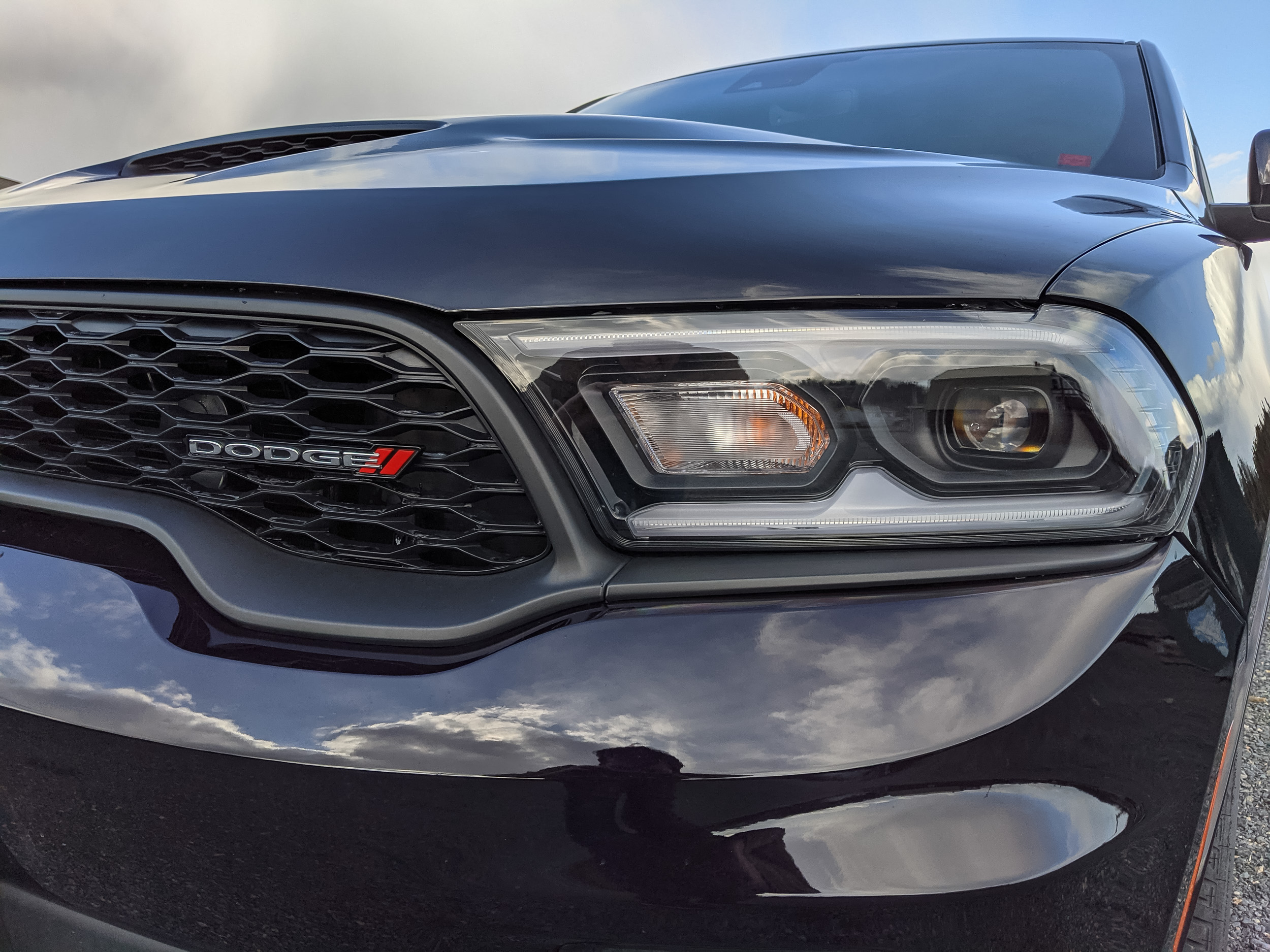 Inside, the theme continues thanks to the massively thick flat-bottom steering wheel (with shift paddles), the T-handle gear selector for the 8-speed automatic.  Heavily bolstered leather seats felt like they came from vehicles higher up the price spectrum.

Is this wrong? Is it stolen valor to have a Durango that looks like the fast one with a V6 under the hood instead of the blown V8? Ask the 8-percent of buyers who picked the slant-six 1971 Challenger versus the 0.3 percent who picked the 426 Hemi, and they’ll probably tell you no. Of course, they also wouldn’t believe that this 3.6L V6 makes more power than most of the V8s Dodge offered back in 1971.

A Powerful and Capable 3.6L V6 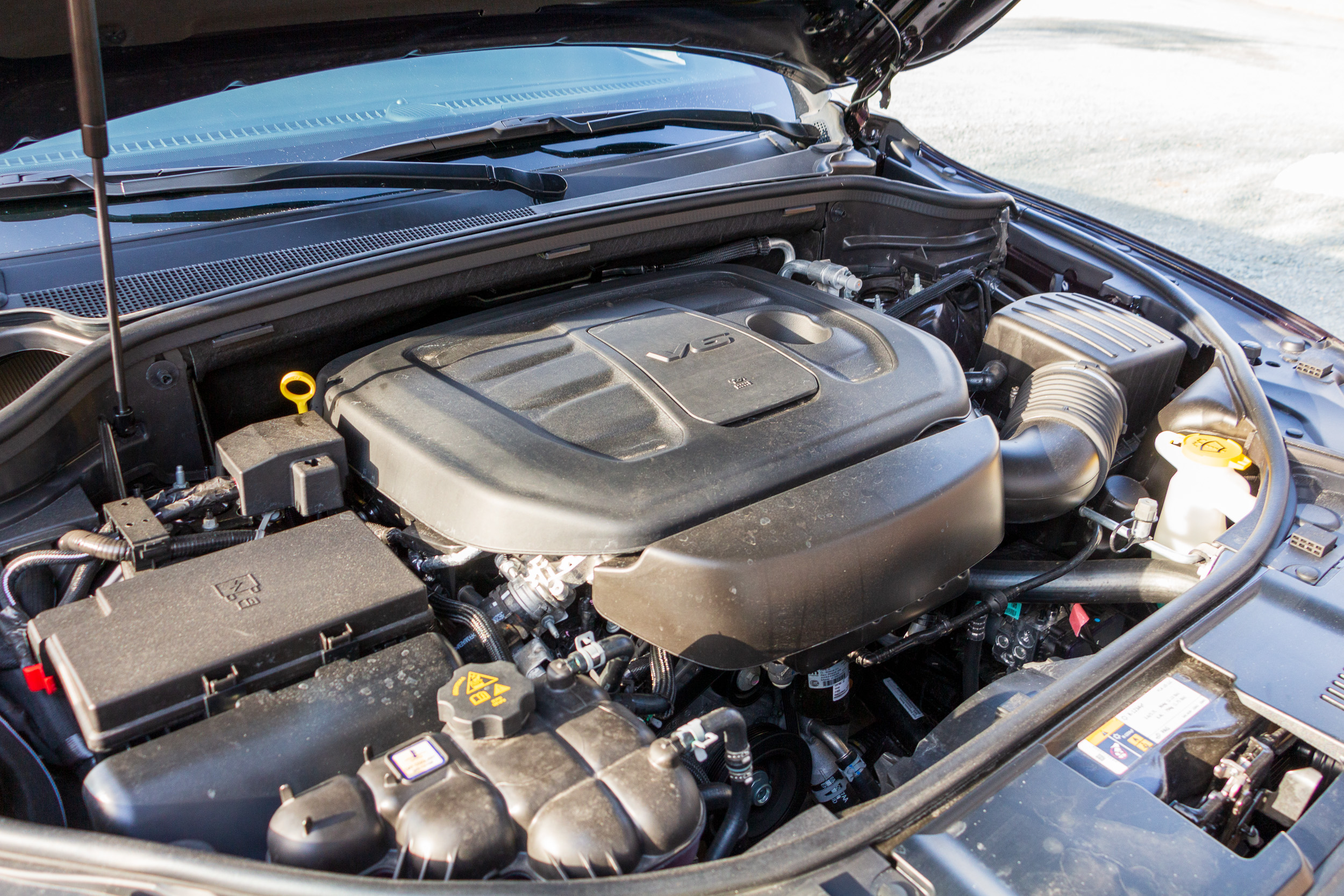 Push the start button and the 295 hp – that dual exhaust adds two ponies – 3.6L Pentastar V6 doesn’t deliver a V8 rumble, but Dodge knows enough to make it sound at least pleasing. When I got on the throttle, from 3,000 through 4,000 rpm on the way to redline, the engine revealed a bit of a whine. Sure, it’s probably just part of the accessory drive, but it gave the slightest amount of Hellcat supercharger soundtrack that made me smile.

None of that would matter if the engine couldn’t perform, but it did a great job of moving the big SUV along. There was plenty of torque for a load of kids and gear, and the Dodge Durango GT’s 8-speed automatic delivered smooth shifts in most situations. The gearbox did become a touch jerky in the 40-55 mph range, but tapping the gas dropped the transmission into a lower gear almost immediately and smoothed it out.

The V6 can tow up to 6,200-pounds, and while that can’t match the 8,700 lbs of the V8 models, it is still enough for a good-sized travel trailer or your Hemi-powered drag racer on an open trailer. It has a built-in trailer brake controller, a feature nearly impossible to find in the segment.

Fuel economy with all-wheel-drive is rated at 18 mpg city, 25 highway (vs. 12/17 for Hellcat). During my testing on a mix of rural and city, the Dodge Durango GT returned around the 25 figure, which is slightly better than my observed average for the segment.

Dodge has tuned the Durango GT stiffly, which gave it a touch more old-school muscle-car feel. It was a little busy on absolutely cratered asphalt, but it did absorb bumps and controlled the body far better than any other vehicle that debuted 11 years ago. It’s not going to convince anyone it’s a sports car, but turn-in was sharp for the segment, and the Durango only floated a little over large dips.

Where the steering disappointed was the inconsistent feel. The amount of effort to turn the wheel went up and down, especially during low-speed maneuvers like parking. The baseball bat-diameter steering wheel felt wonderfully sturdy at higher speeds, but the power assist let it down. 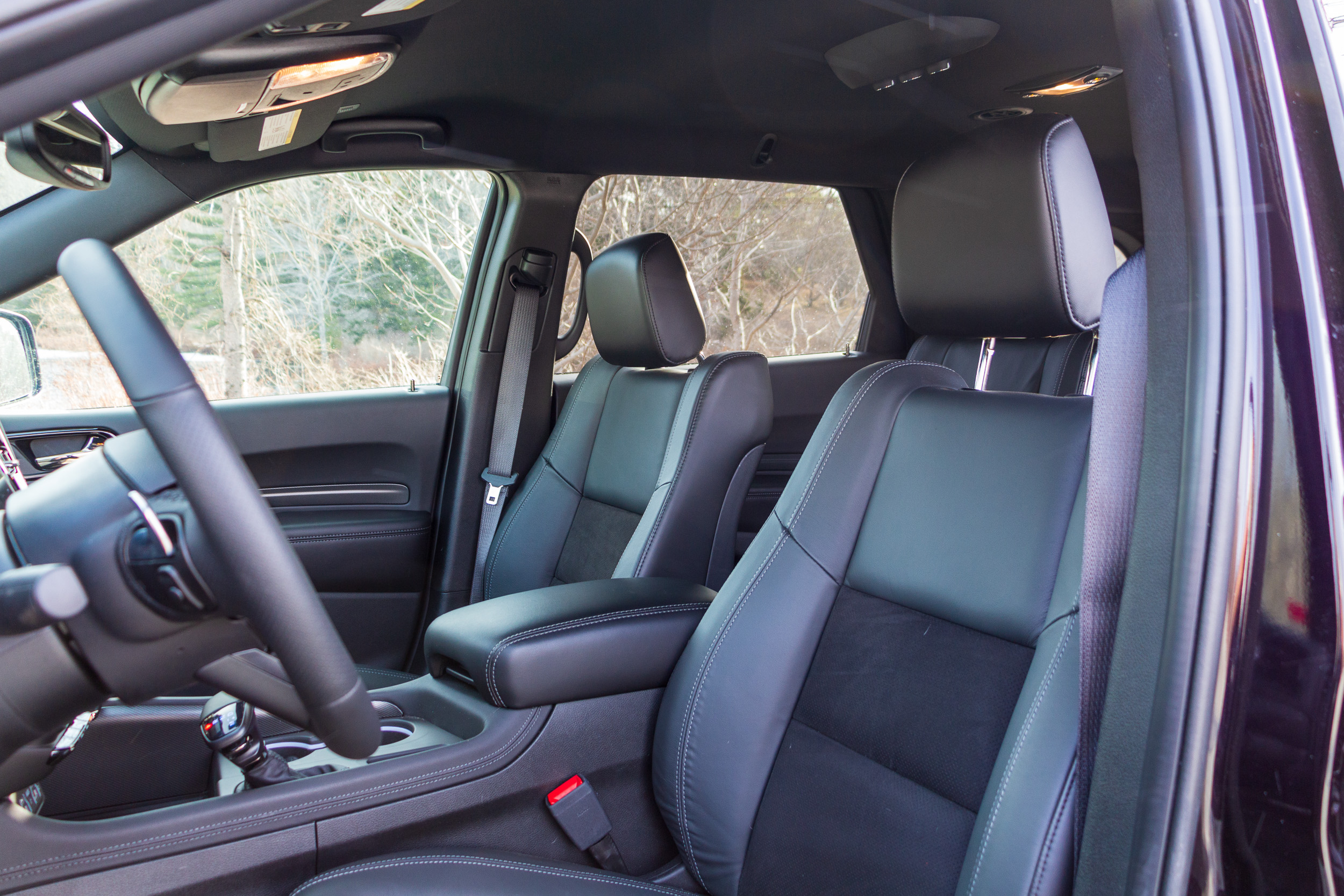 Leather and suede seats for all 3-rows made the cabin feel premium, and all three rows had enough head and legroom for this six-foot-three XXL tester, but a few details undermined Dodge’s hard work on this year’s interior refresh. Like whatever was in the headliner that rattled between the exterior sheet metal and the inside liner over every bump. Finding the source was difficult because a panel would move at least a couple of inches up and down when lightly pressed.

The old-fashioned foot-operated parking brake’s pedal hangs down into the driver’s area just waiting to be snagged by an unfortunate shin bone, and there isn’t a dead pedal to rest your left foot. The shifter’s manual mode slot and right hip will likely try to occupy the same piece of real estate for larger drivers, pushing it back into D. 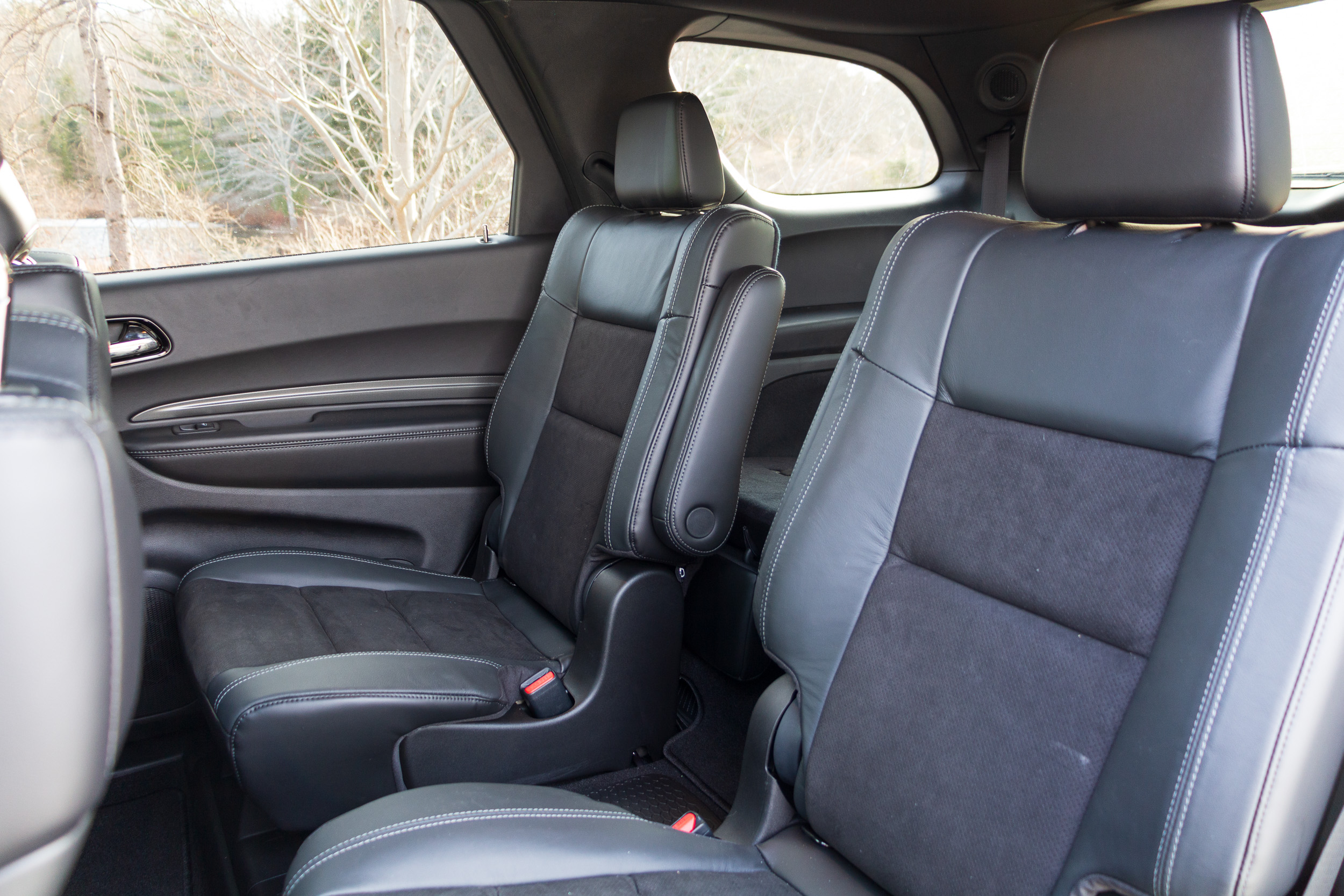 Some other low-rent materials are scattered around, but not enough to cancel out what the seats and the newly driver-angled infotainment screen accomplished. The Dodge Durango GT feels not like an SUV, but more like a Dodge Challenger with room for more than just you and your front-seat passenger. 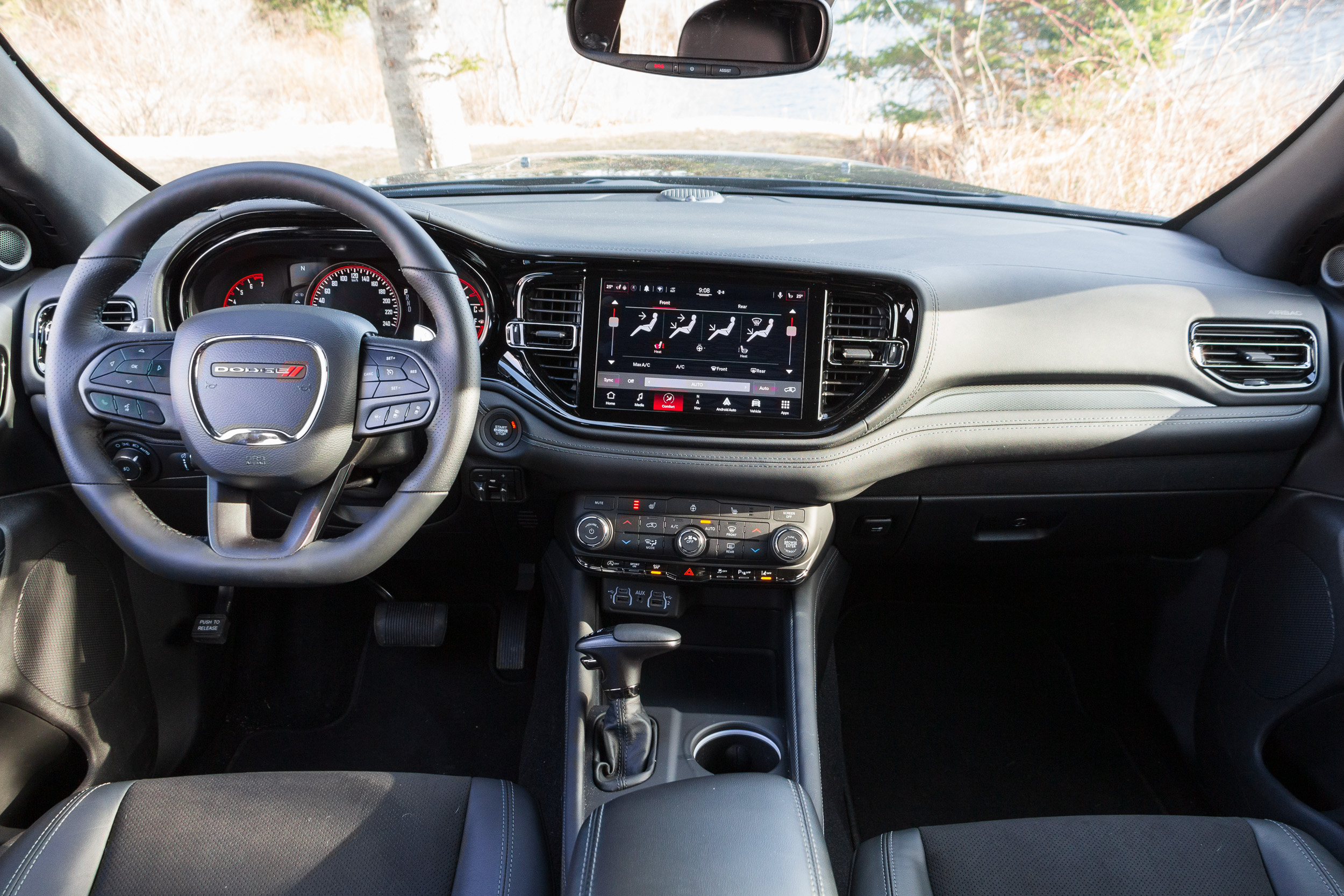 Dodge’s most impressive feature, offered in this GT trim level and those higher, was the new Uconnect 5 system operating on a 10.1-inch screen. Uconnect 4 on the standard 8.4-inch display is still one of the better interfaces in the industry, but this new version was at a whole new level. Vastly more processing power made the screen respond more quickly. Dodge also added natural speech recognition to the voice controls (“Hey Dodge, I’m cold,” warms the cabin, for example), and the system can tell if the driver or passenger is speaking. One button for each ensures the system is following the boss’s wants and needs.

TomTom navigation is built into the system, as is wireless Apple CarPlay and Android Auto with over-the-air updates supported. I could control nearly every function of the vehicle through the system and programmable quick-access buttons accessed often-used features like climate control and parking cameras.

Dodge also has a full slate of honest-to-goodness buttons below the screen for those who insist on the old-school tactile feel. It’s somewhat ironic that one of the only systems good enough to make buttons unnecessary is one of the few to have them all. Available wireless charging makes them superfluous, but USB and USB-C plugs are scattered around the cabin for powering gadgets. 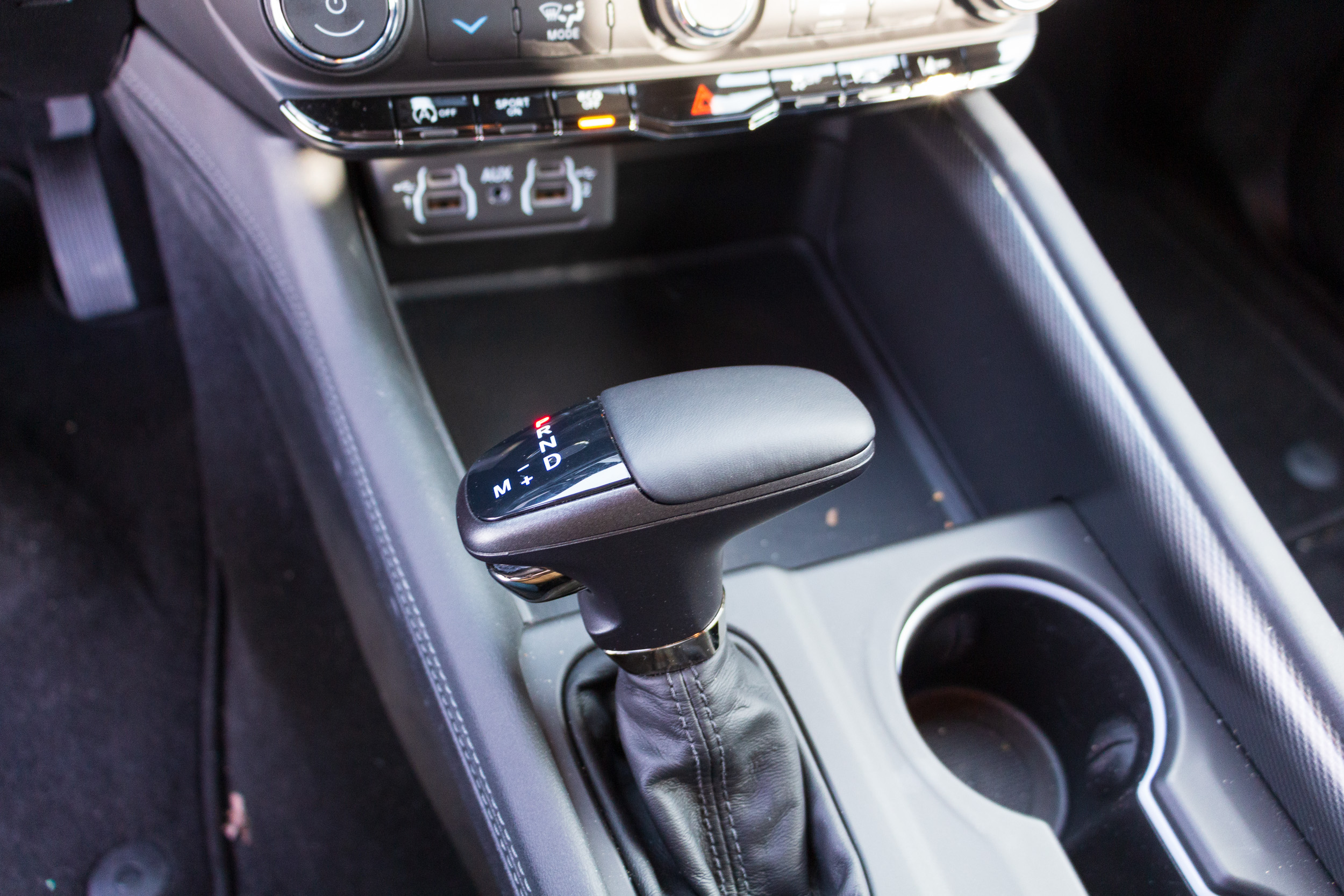 If you want all of the goodies in your 2021 Dodge Durango GT, you’ll need the GT Plus trim, which unlocks the two Premium Group packages, which add Alpine audio, power sunroof, LED low-beams, and a few other choice bits. More importantly, it unlocks the Technology Group, which includes adaptive cruise control, brake assist, and collision and lane departure warnings – the desirable options on nearly every version of the Durango. 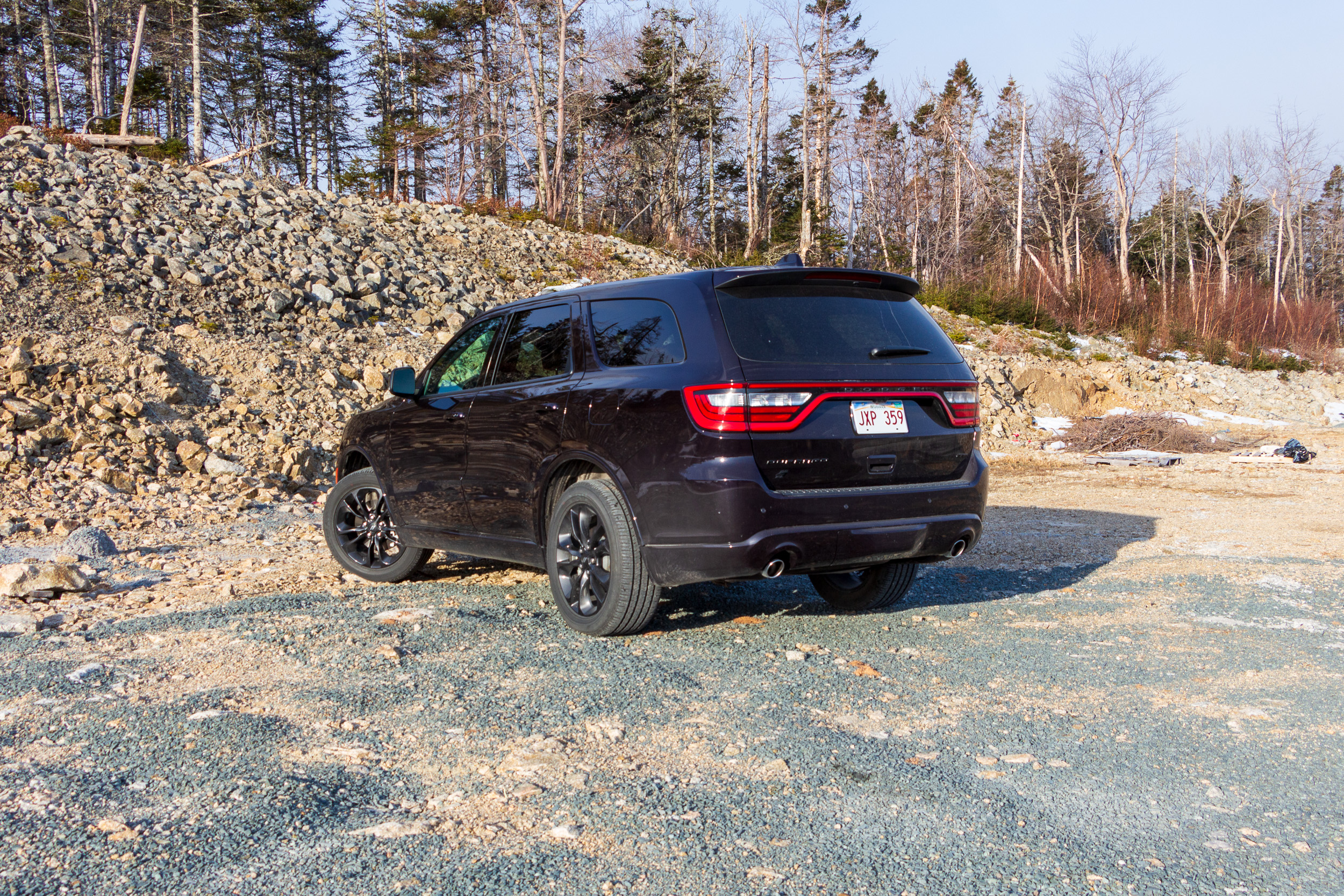 Though this is a big one, the 2021 Dodge Durango GT’s 17.2 cubic feet of cargo space trail the Ford Explorer‘s 18.2, and the Chevrolet Traverse’s massive 23 cubic feet. Fold the rear seats, and you’ll get 43.3 cubic feet, falling farther behind in capacity to those two competitors. Dropping all the seats opens up 85.1 cubic feet. Curiously, Dodge put the power hatch button on the side of the cargo bay. Great if you’re not tall, but it was tougher to use with my arms full. And to duck out of the way as it shuts.

The 2021 Dodge Durango GT has a simple mission goal: To carry your family and their trappings but make you feel like you’re in one of the brand’s 700+ horsepower Hellcat models and not in a crushed Cheerio laden minivan. At that mission, it succeeds remarkably.

To price out and build your own Durango online check out Dodge.com.